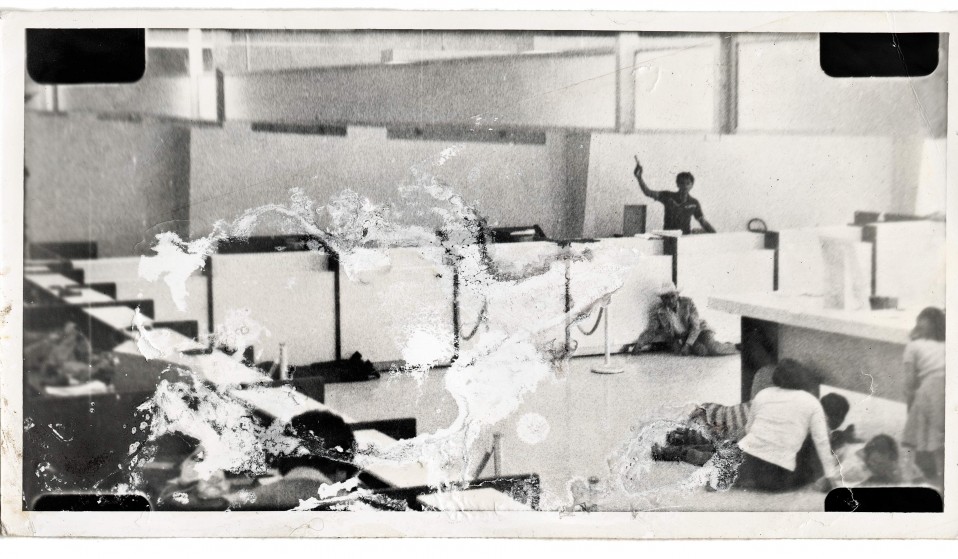 Huck interviews Stefan Ruiz, the photographer behind a new book on Mexican crime photography, to talk about El Chapo, the celebrity cult, fashion, and fantasy.

Huck interviews Stefan Ruiz, the photographer behind a new book on Mexican crime photography, to talk about El Chapo, the celebrity cult, fashion, and fantasy.

The story of Mexican Crime Photographs from the Archive of Stefan Ruiz goes something like this: on a trip to Mexico City in 2010, Mexican-American photographer Stefan Ruiz was in a flea market and came across a collection of old photographs from the 1950’s through to the 70’s – mugshots, shots from crime scenes, mock up illustrations – which may or may not have once belonged to the Mexican secret service. An avid collector of oddities, Ruiz promptly bought as many of the photographs as he could from the vendor. Ruiz mostly shoots fine art, editorial, and celebrity photographs – but there was something about the found photographs which he couldn’t ignore.

With the help of Gost Books, a collection of these photographs was released in November 2015. As a book of found photography, Mexican Crime Photographs is incredible to flip through. “One thing I’m obsessed with is this combination of art and crime” Ruiz says on the phone from Cartagena. “Part of it has to do with my parents: my dad was a criminal defence lawyer, and my mom is an art professor, and so it’s one of those things I’ve always been interested in. On top of that I’m into the whole celebrity world, and the fabrication of stars.” 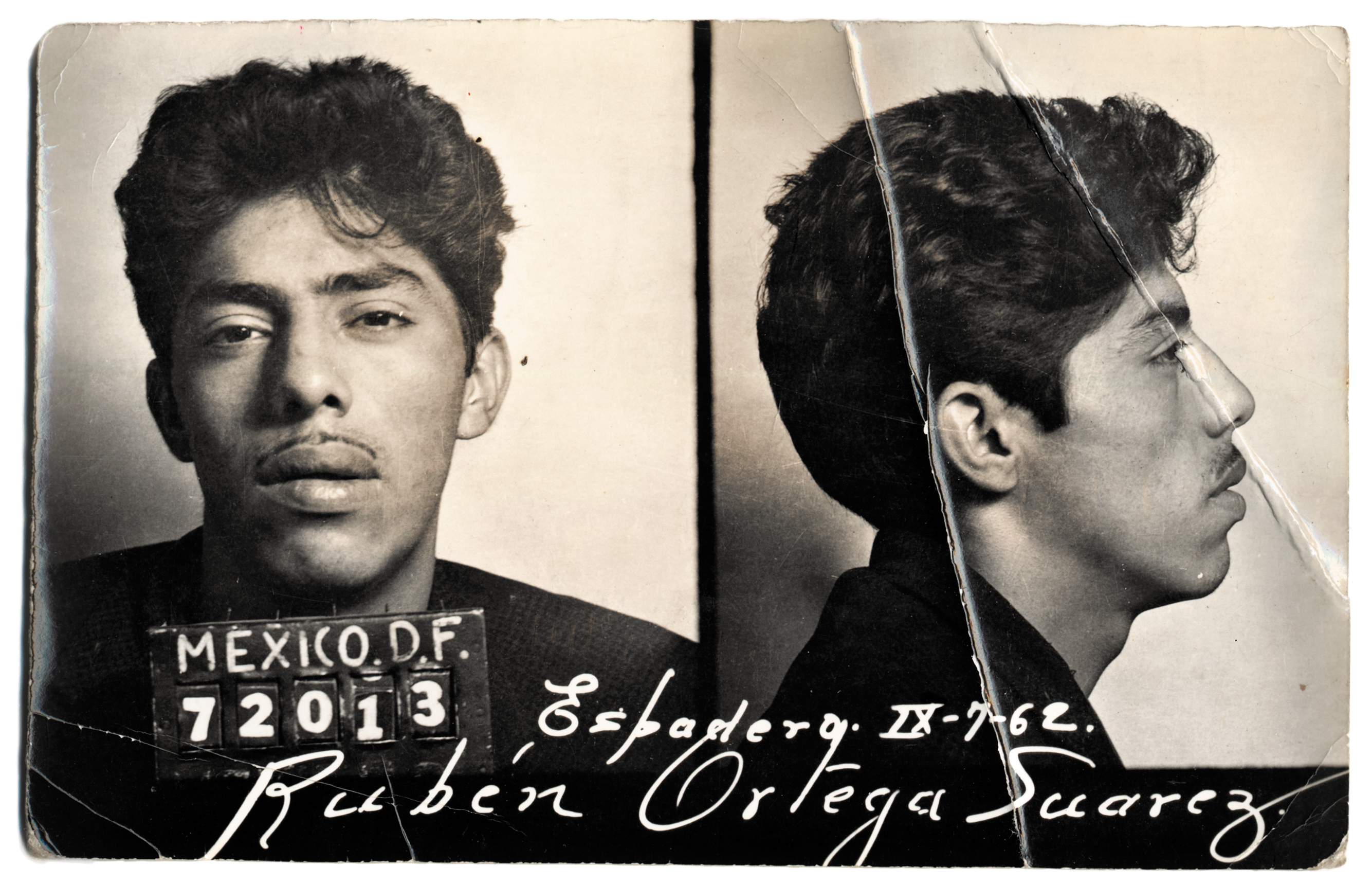 Ruiz’s photos aren’t always glamorous. “I got to photograph Justin Bieber, a month or two ago, and I was super into it, because I was like ‘how the fuck are they going to let me do this?’” In general his photos are brightly lit, and often pull from stoic Rennaisance portraiture – blemishes and all. “I guess I do a combination of photos that are flattering and then those are definitely not. I’m definitely not the safest option.”

Neither were the flea market photos. The documents had been severely damaged by age and exposure, which has left bizarre and oddly appealing traces on the final product. “I had to soak some of them in water because they were stuck together” Ruiz explained.

The photos have also taken on a new relevance since the capture of Joaquin “El Chapo” Guzman Loera. In a blaze of gunfire captured on shakey GoPro footage, the leader of the Sinaloa Cartel was captured, after having escaped from prison seven months earlier. The photos and footage from his arrest have been circulating widely since he was captured: there’s been a kind of glee taken while indulging in photos of him in a dirty tank top, hunched over and being led away by security forces. 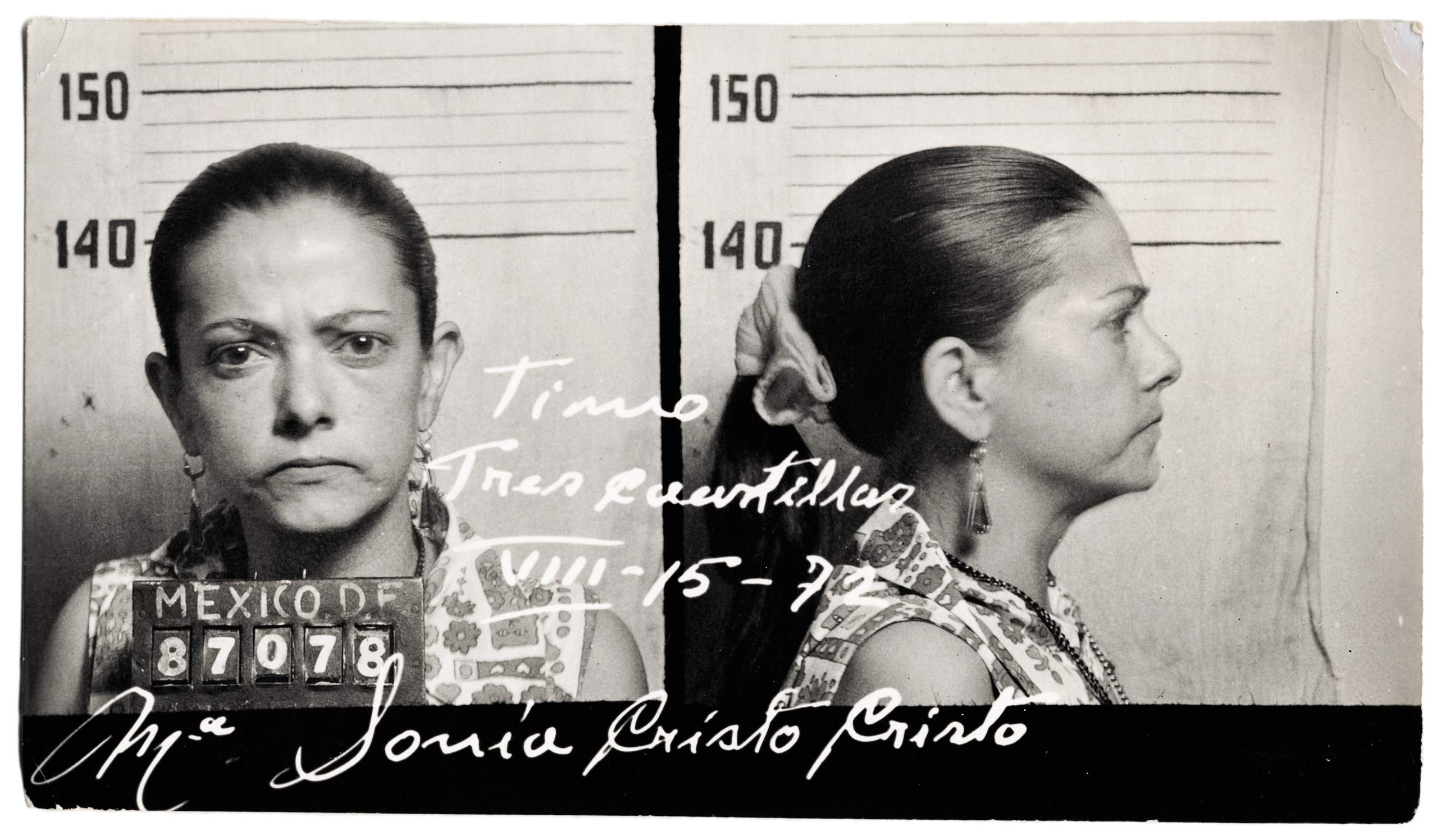 There’s been another kind of reaction to photos of El Chapo from his interview with Sean Penn, though. In these, El Chapo is dressed in a loud silk shirt. It’s El Chapo the celebrity. The shirt is reported to be selling at an obscene rate – with website orders crashing the website of one clothing store in L.A., according to one source. The picture has turned El Chapo into a fashion icon.

The story of El Chapo blurs lines between imagination and real life in all sorts of ways. The interview with Sean Penn, which helped get El Chapo captured, was set up by Kate del Castillo, a Telenovela actress. El Chapo is a celebrity in Mexico, having built up a massive crime syndicate that reels in around $3 billion a year. “He’s like a folk hero in Mexico among certain people” Ruiz says. 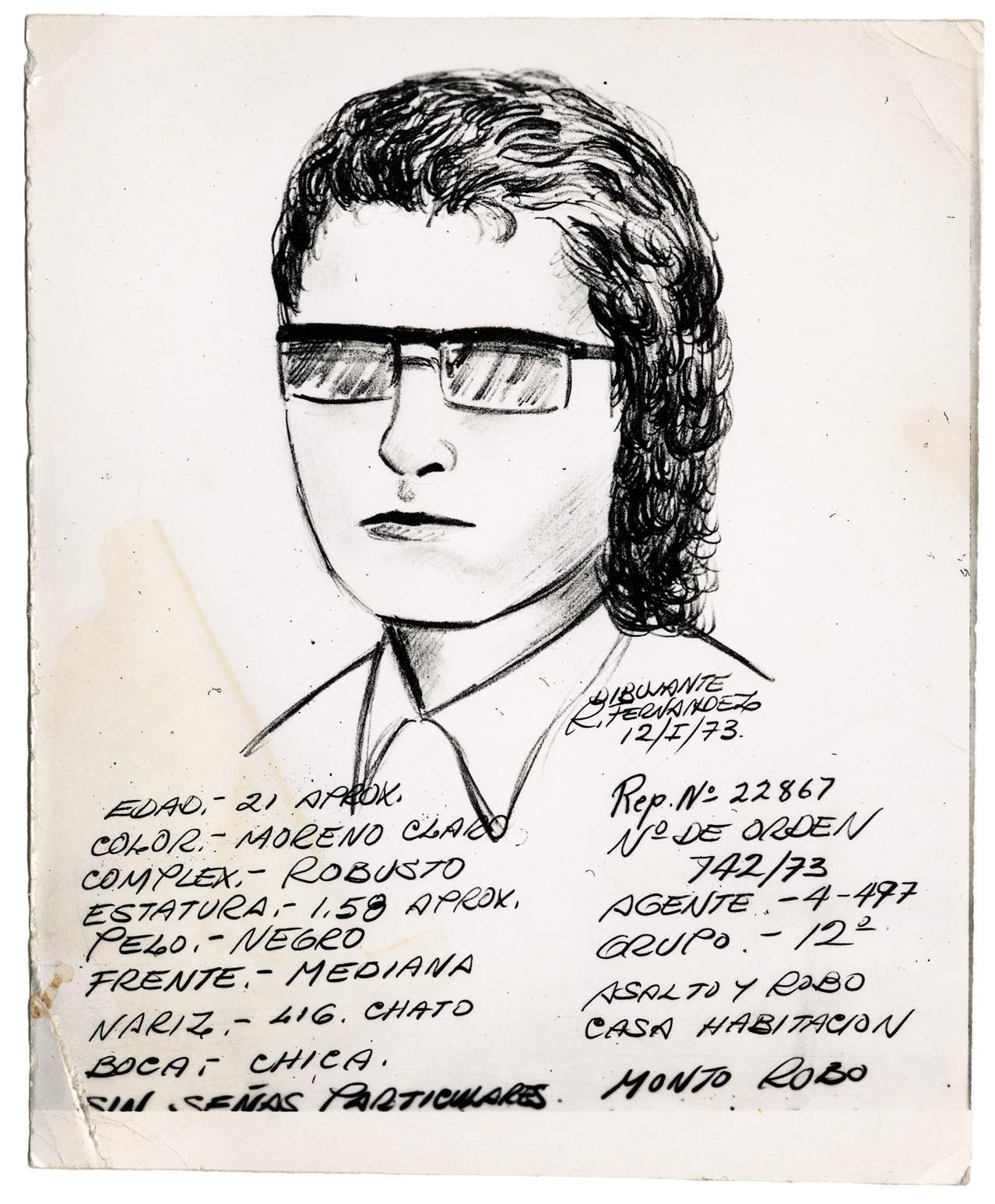 A big part of El Chapo’s appeal as a Robin Hood figure is the Mexican government, which is widely seen as corrupt. The Institutional Revolutionary Party (PRI) were head of Mexico’s government for more than seventy years. Ruiz explains that it’s more than likely that during that time they had a monopoly on the drug trade, which meant there was less violence between armed groups. When the PRI lost power, that system fell apart, leaving a power vacuum. It was during that 12 year period that the drug trade picked up and the violence amplified.

“Your average Mexican probably thinks the government is corrupt. They killed 43 students and nothing’s been done. Mexico’s always been policed and controlled by the United States,” Ruiz says. “Then you have someone like El Chapo who is basically running this massive business and doesn’t really play by the rules, and is totally flipping off the U.S. The U.S. wants to extradite that guy and put him in a maximum security prison just to teach everyone a lesson. But if they extradite him, that would show how much of a puppet the Mexican president is.”

In the face of corruption and US hegemony, the cartel leader sees himself as a champion of the people. He’s been able to grow the economy of Mexico’s Northern region enormously. Ruiz’s crime photos might speak to an early time of ‘Gentlemen Thieves’ – well dressed criminals with a code of honour, but he’s doubtful that much has really changed. “I think it was a bit of a different time then, but there’s still that code of ethics – the criminal code of ethics – it’s still around. El Chapo, in a way, with him meeting Sean Penn and all of that, he wanted to get his story out there, and he obviously doesn’t think he’s been doing anything bad, or anything that wrong. I think he feels like he probably has his ethics.”

El Chapo was able to build up a drug empire that’s actually come to represent a major portion of the economy, especially in Mexico’s Northern region. And it’s eased into the cultural imagination as well. Ruiz has been around El Chapo’s stomping ground for photo projects in the past. “There’s a Mexican musician, a norteño there – called The Commander – I photographed him. He’ll go onstage wearing a bulletproof vest, with an AK-47. And they often do things for the narcos, it’s common knowledge they’ll play for these cartels.” 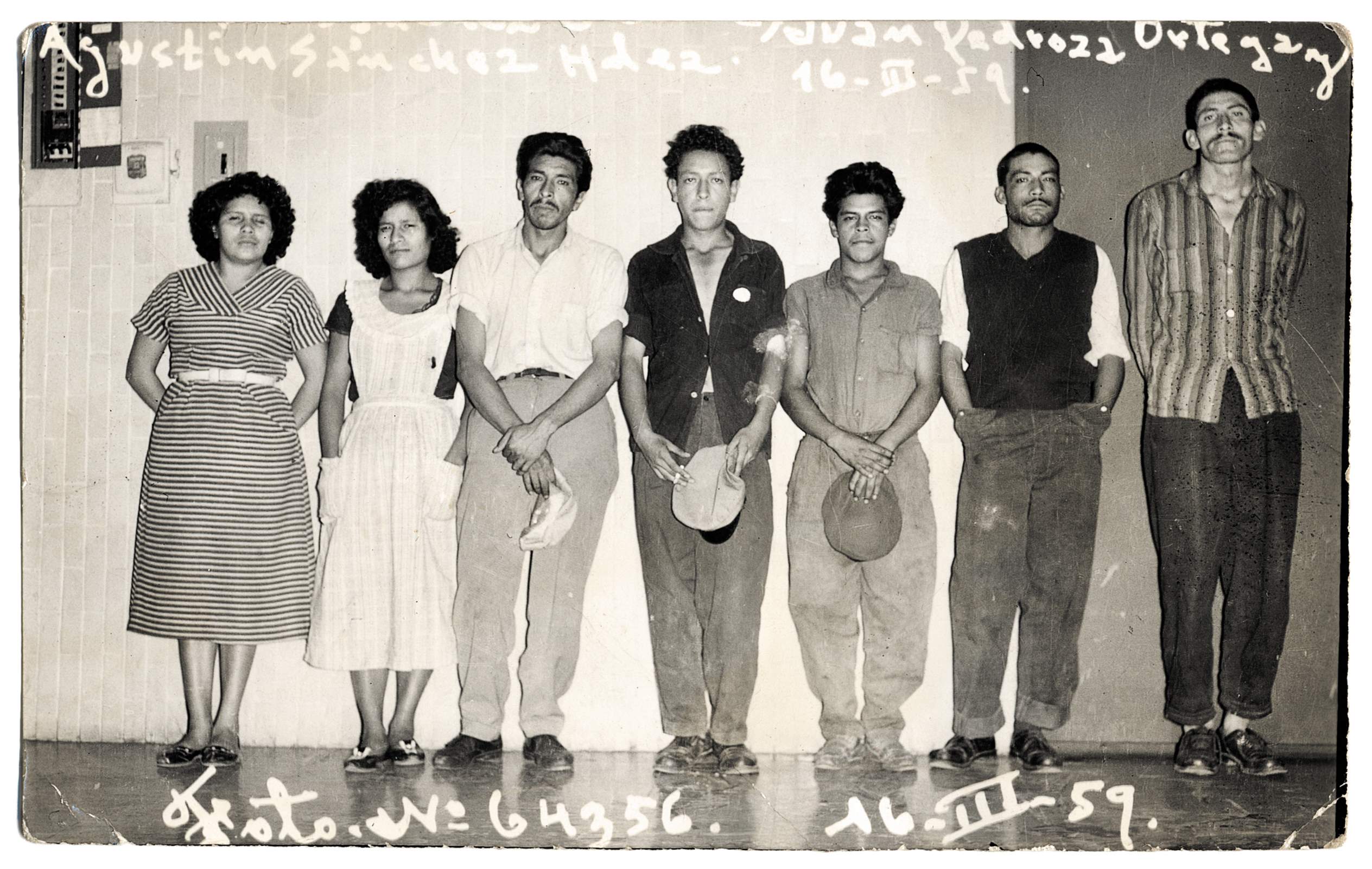 Telenovela’s are another site of the crossover between violence and glamour. Ruiz calls the Telenovelas Mexico’s second largest legal import after oil. “The stories are always pretty basic: rags to riches, or those sort of fables – but they seem to do really well in developing countries.” Enamoured by the dynamics of celebrity, class, race and, morality at the heart of the melodramas, Ruiz shot Telenovela stars onset, immediately after they had finished shooting, getting at a sort of inbetween space when the actors were neither their characters nor fully themselves. “Telenovelas are so huge and nobody’s really done anything on it, that’s why I did it. People either get the project or they don’t. I also wanted to do it in a way so that if you liked Telenovelas you might like the book – it’s not just making fun of them.” The project became The Factory of Dreams, a photo-book he released in 2012.

“Someone like El Chapo, to him, the Telenovelas would be a fairly important part of his life growing up” Ruiz continues. “The actress, Kate del Castillo, she was in a Narco Telenovela – that was important to him.”

Narcos watch TV, and TV watches narcos. Even El Chapo’s escape from prison doesn’t diverge from the spectacle all that much. One notable prisoner featured in Mexican Crime Photographs is Joel David Kaplan, an American (who was most likely working for the CIA), and escaped from prison through an elaborate helicopter plot, later turned into the Charles Bronson film Breakout. 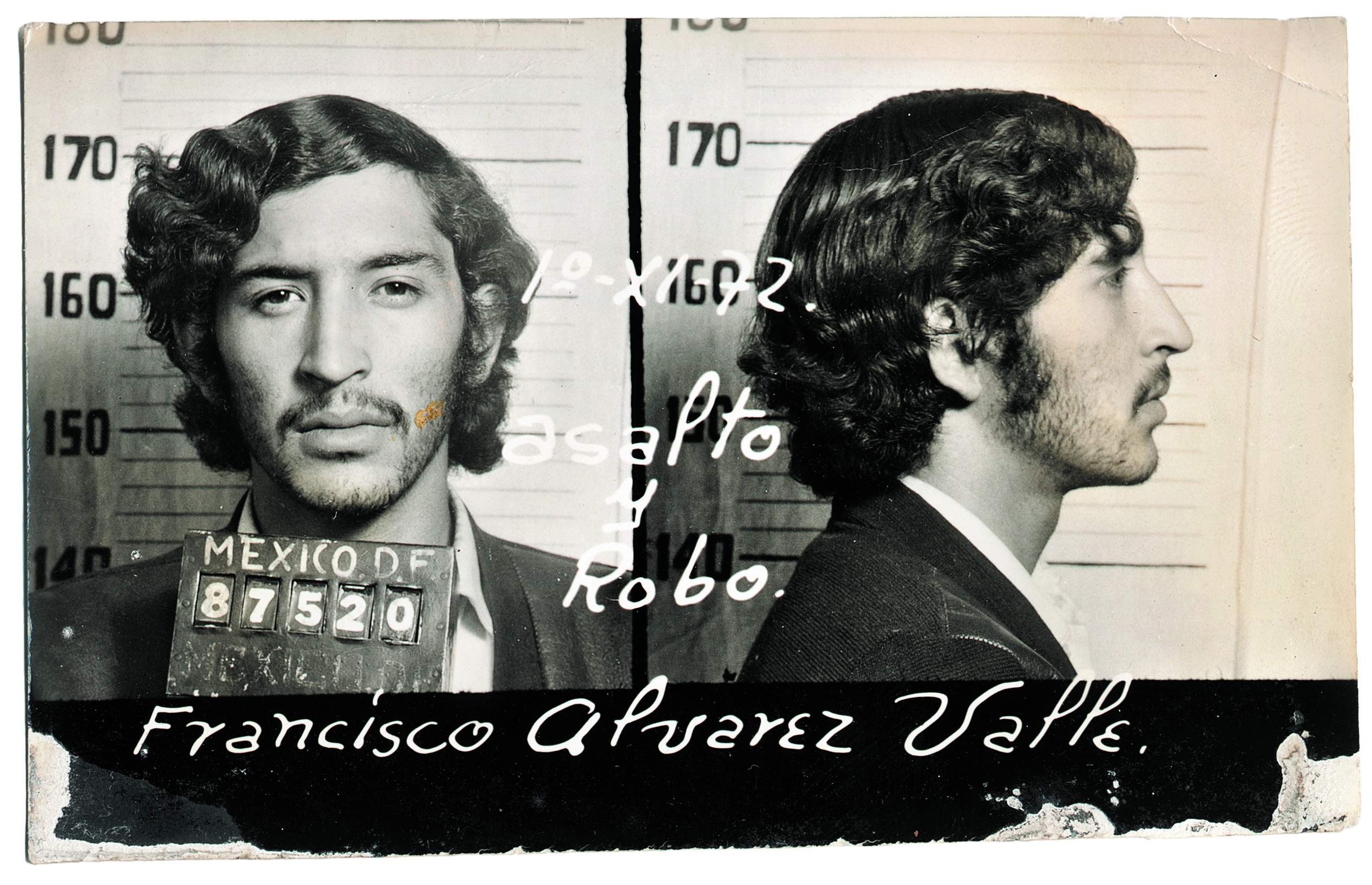 In Ruiz photos, it’s hard to miss the way criminals in the faded yellow photos sport stylish clothes, good haircuts, and handsome grins. You can trace fashion in the way these criminals dress. In arranging the book with designer Stuart Smith, Ruiz talks about including photos as a sort of in-joke between the two, “We’d pick guys just because they have great hair, or because of their glasses. We tried to make it semi-random, but curated at the same time.”

Ruiz’s archive of crime photos is an index of our fascination with criminals and the documentation of crime: an evolving conversation about those who stepped over the line – the people we try the hardest to exclude, but the ones we still labour over to document.

Mexican Crime Photographs from the Archive of Stefan Ruiz is out now, published by Gost.

Linkedin
RELATED ARTICLES
OTHER ARTICLES
The mythic fame of Thailand's Tong Daeng: the rags-to-riches mongrel who stole the hearts of a nation and is now at the forefront of a new wave of state censorship.
Cartel Land profiles two vigilante movements who took up arms against drug cartels on opposite sides of the US-Mexico border, and asks what would you do in their shoes?
Josh Jones' new photo zine Hollywood Star Trekking takes readers on a surreal and subversive celebrity-spotting tour of Los Angeles.
Photographer Reggie McCafferty finds outrage and grief in the wake of the kidnapping and murder of 43 students.
Photozine and documentary by Russian filmmaker, photographer and fashion designer show a cultural struggle happening behind the scenes of a war zone.