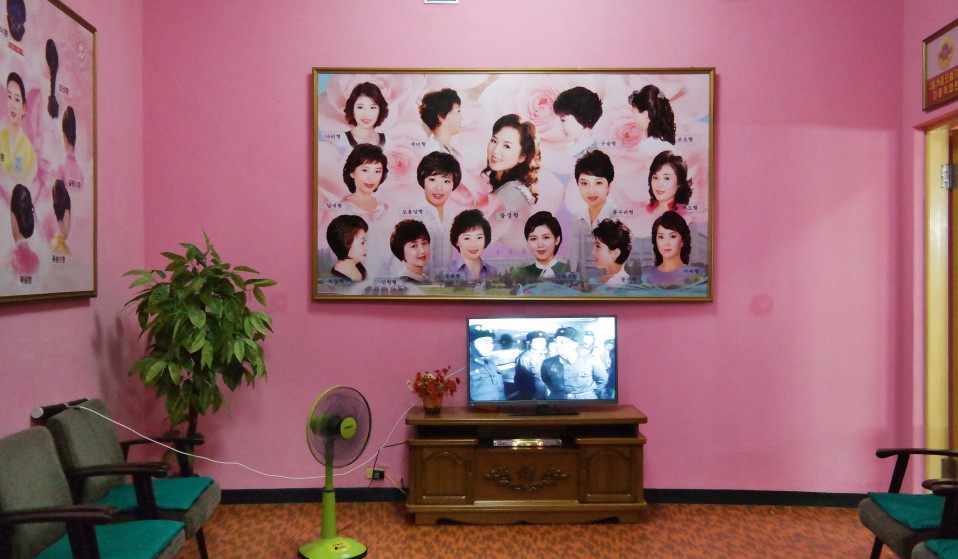 As the capital of the world’s most secretive country, Pyongyang is a city that’s rarely documented in Western media – until now. In his latest book, Inside North Korea, photographer Oliver Wainwright captures a fantastical world of candy-coloured apartment blocks and dramatic vistas.

As the capital of the world’s most secretive country, Pyongyang is a city that’s rarely documented in Western media – until now. In his latest book, Inside North Korea, photographer Oliver Wainwright captures a fantastical world of candy-coloured apartment blocks and dramatic vistas.

Decimated by bombs during the Korean War, the city of Pyongyang was completely rebuilt in 1952. Kim Il Sung, the first Supreme Leader of North Korea, imagined the capital as a grand stage set replete with majestic axial boulevards, anchored by Herculean monuments to the power structure.

Although some of the earlier designs used Soviet architecture as a departure point, the city easily embraced its own identity rooted in a combination of traditional Korean culture and design, and an unexpected taste for a science fiction.

Over the past six decades, Pyongyang has become the crown jewel of North Korea as a grandiose vision of independence, self-reliance, and national pride. Under the rule of Kim Jong Un, construction continues to expand in order to fulfil the promise of the third Supreme Leader: “Let us turn the whole country into a socialist fairyland.”

In July 2015, Guardian journalist and photographer Oliver Wainwright travelled to Pyongyang with Koryo Tours, a Beijing-based company that has been giving foreign visitors a look inside North Korea since 1993. Over a period of eight days, Wainwright was taken on a whirlwind trip, visiting about ten sites a day that included everything from museums to arenas, hotels to monuments – everything except the homes of the people of Pyongyang. 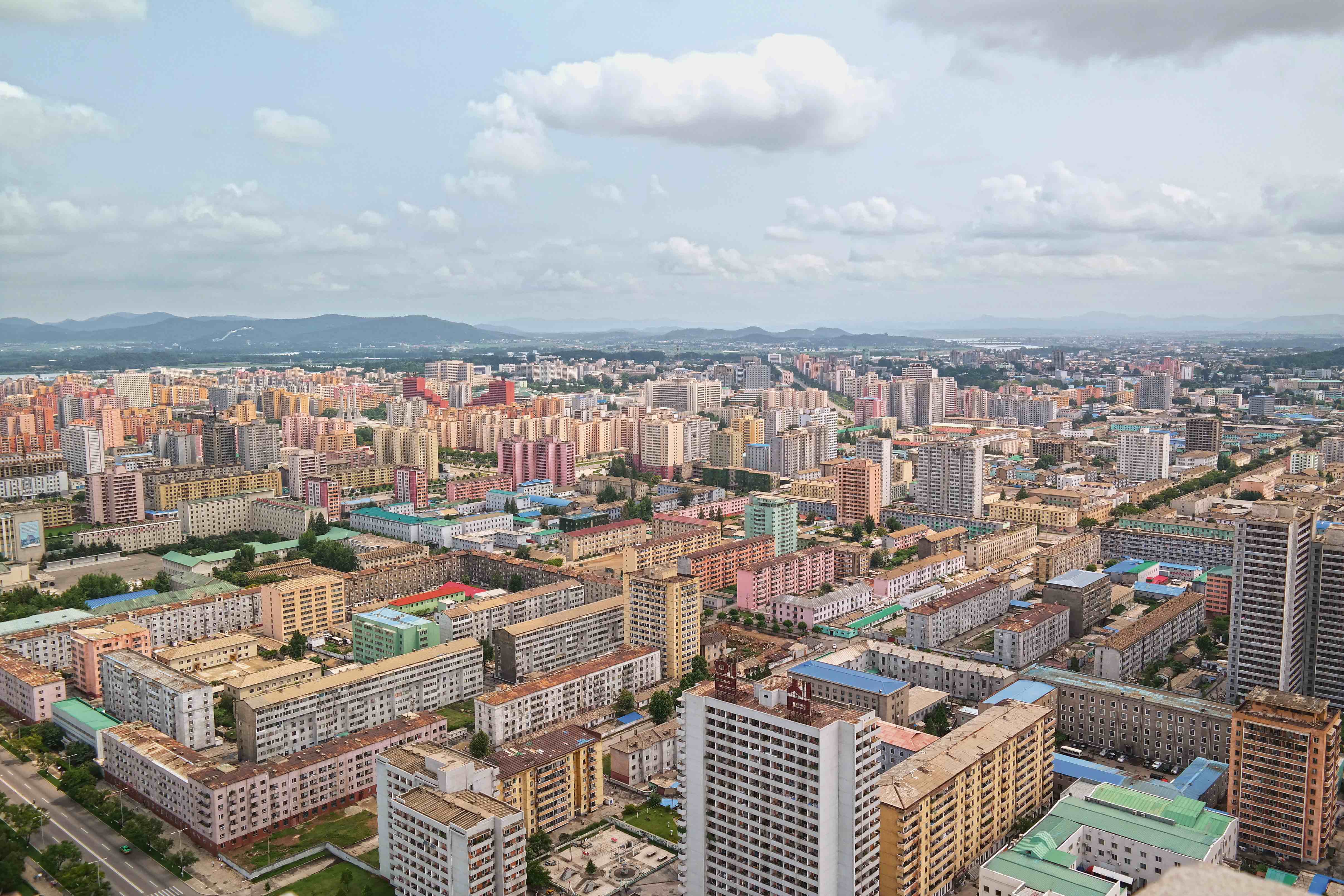 View from the top of the Tower of the Juche Idea in Pyongyang. The North Korean capital stretches out beneath you as a pastel-coloured panorama, a rolling field of tower blocks painted in terracotta and yellow ochre, turquoise and baby blue – a distinctive colour palette that recurs throughout the country’s architecture and interiors.

The result is Inside North Korea (Taschen), a revealing trip into one of the most secretive nations on earth. Featuring about 200 photographs with detailed captions for history and context, the book offers an impressive look at the most lavish locales across Pyongyang. Here, Wainwright responds to the grandeur of a regime and the way it expresses the national “Juche” ideology of self-reliance, as was codified in Kim Jong-il’s 1991 treatise On Architecture.

“In the manifesto, Kim Jong-il talks about how the buildings were designed to look like a great crowd of people showing their devotion to the leader,” says Wainwright. “They have these very theatrical staged places all across the city that makes the individual feel very small indeed and the leader feel omnipresent. It’s probably one of the most choreographed cities I have been into in that sense.”

In Inside North Korea, Wainwright presents Pyongyang as the government wants the city to be seen, simultaneously embracing the spectacle and humanising the façade of the regime. “One of the main reasons I did the book was to encourage more people to go there, because I think the best way to get a better understanding of what is going on is to visit,” Wainwright explains. 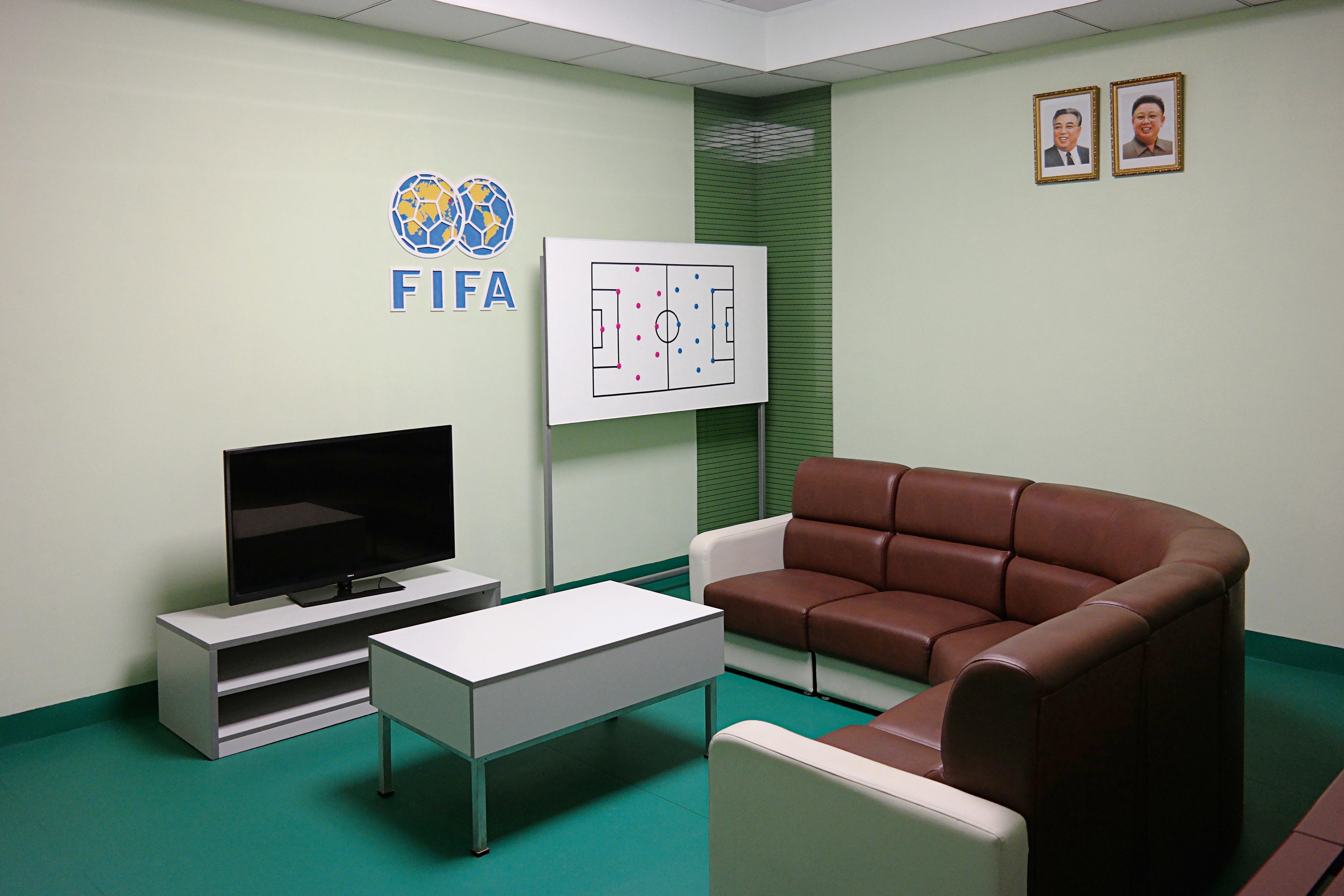 The recently renovated support rooms of the Rungrado May Day Stadium embody the essence of the current North Korean interior aesthetic, with their complementary colour schemes and synthetic, wipe-clean surfaces. Built in 1989 and used for the Mass Games performances for years, the stadium reopened in 2015 with a new football pitch and running track, as well as the optimistic addition of the FIFA and Olympic logos.

“Part of the reason I was photographing the crazy coloured pastel rooms that look like Wes Anderson films is to show that side of the country, because what we get in Western media are images of parades, tanks, nuclear missiles, and endless grey apartment blocks ­– an understandably dystopian Soviet impression. I wanted to show a different side.”

Wainwright takes a perspective similar to what the citizens of Pyongyang experience every day, living in this fantastical landscape filled with candy-coloured apartment blocks, Jetsons-style landmarks, and dramatic vistas. “A lot of the new architecture has this bizarre, escapist, fantastical quality to it – which I personally think is quite a clever way of distracting people from life in this authoritarian regime,” he says.

“Kim Jong Un is building theme parks, ski resorts, water parks, and dressing up these skyscrapers to look like sci-fi monuments and I get a sense that people in Pyongyang are excited about these new buildings. Even though they might not have electricity 24 hours a day and outside the capital, it’s very poor, but the architecture is providing a distraction, almost like a tranquilliser, from everyday life.” 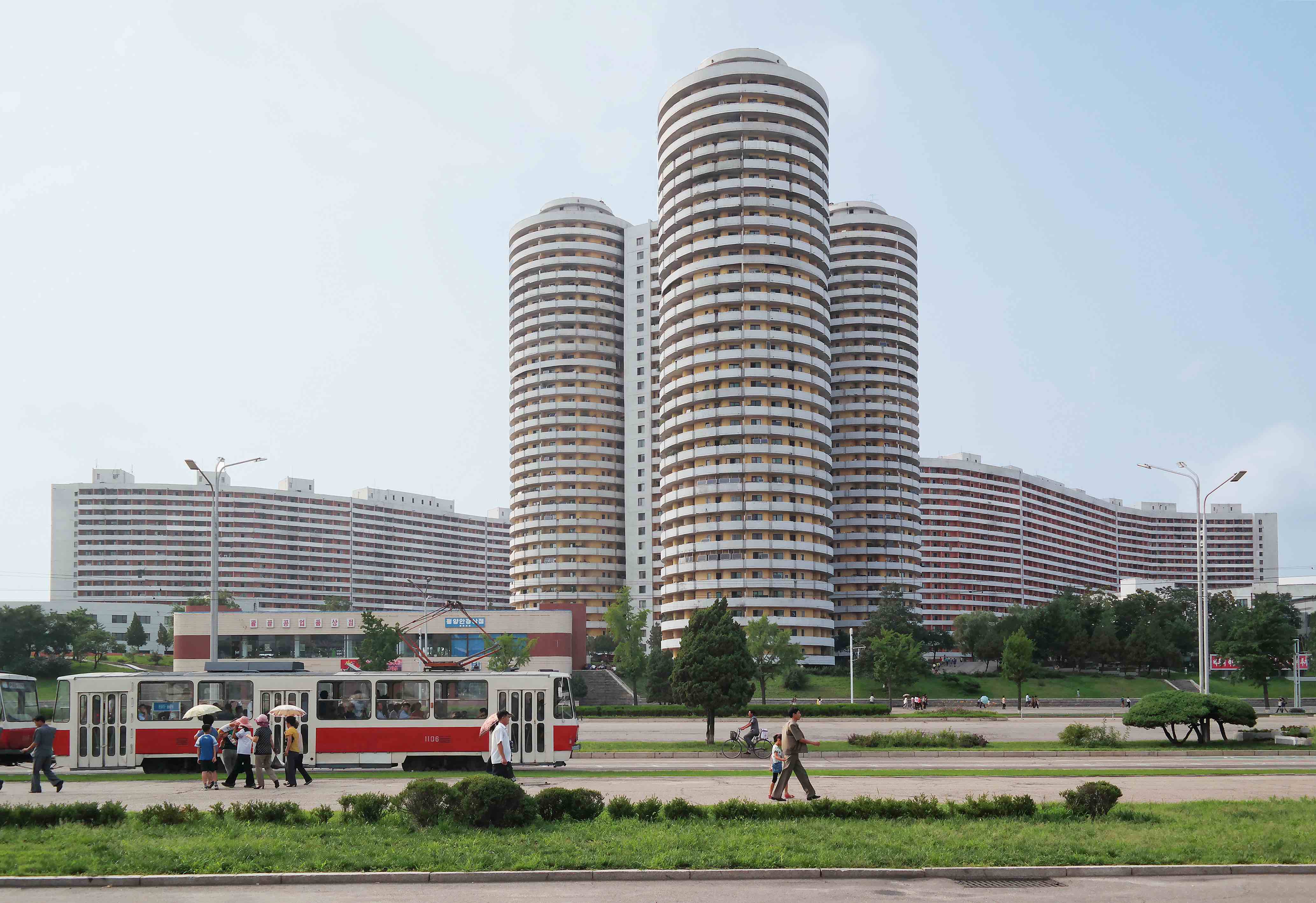 Cylindrical apartment towers for the Pyongyang elite line down the 4km- long avenue of Kwangbok Street, a ceremonial boulevard built for the 1989 World Festival of Youth and Students. As Kim Jong Il wrote approvingly: “In the formation of Kwangbok Street, a large variety of shapes, such as cylinders, windmills, polygons, the letter S and steps, were adopted for apartment blocks. […] The arrangement of buildings on straight lines along the main street is an outmoded method.” 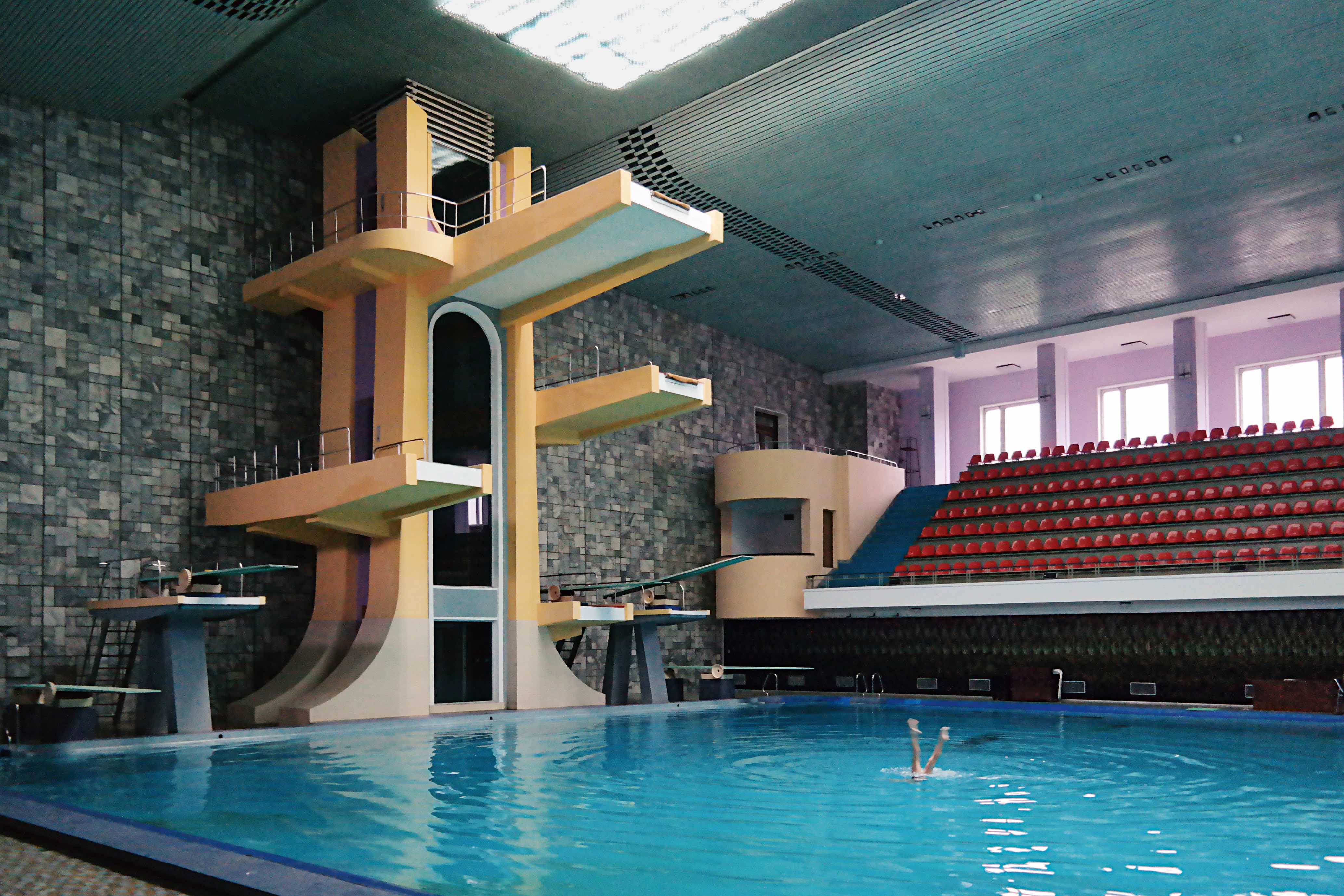 The Changgwang Health and Recreation Complex was the city’s flagship health centre when it opened in 1980. Covering an area of almost 40,000 square metres, it contains a sauna, bathhouse, swimming pools and hair salons – where customers can choose from a range of officially sanctioned haircuts. In a futuristic touch, the diving boards are reached by a mechanical elevator in a shaft faced with smoked glass. 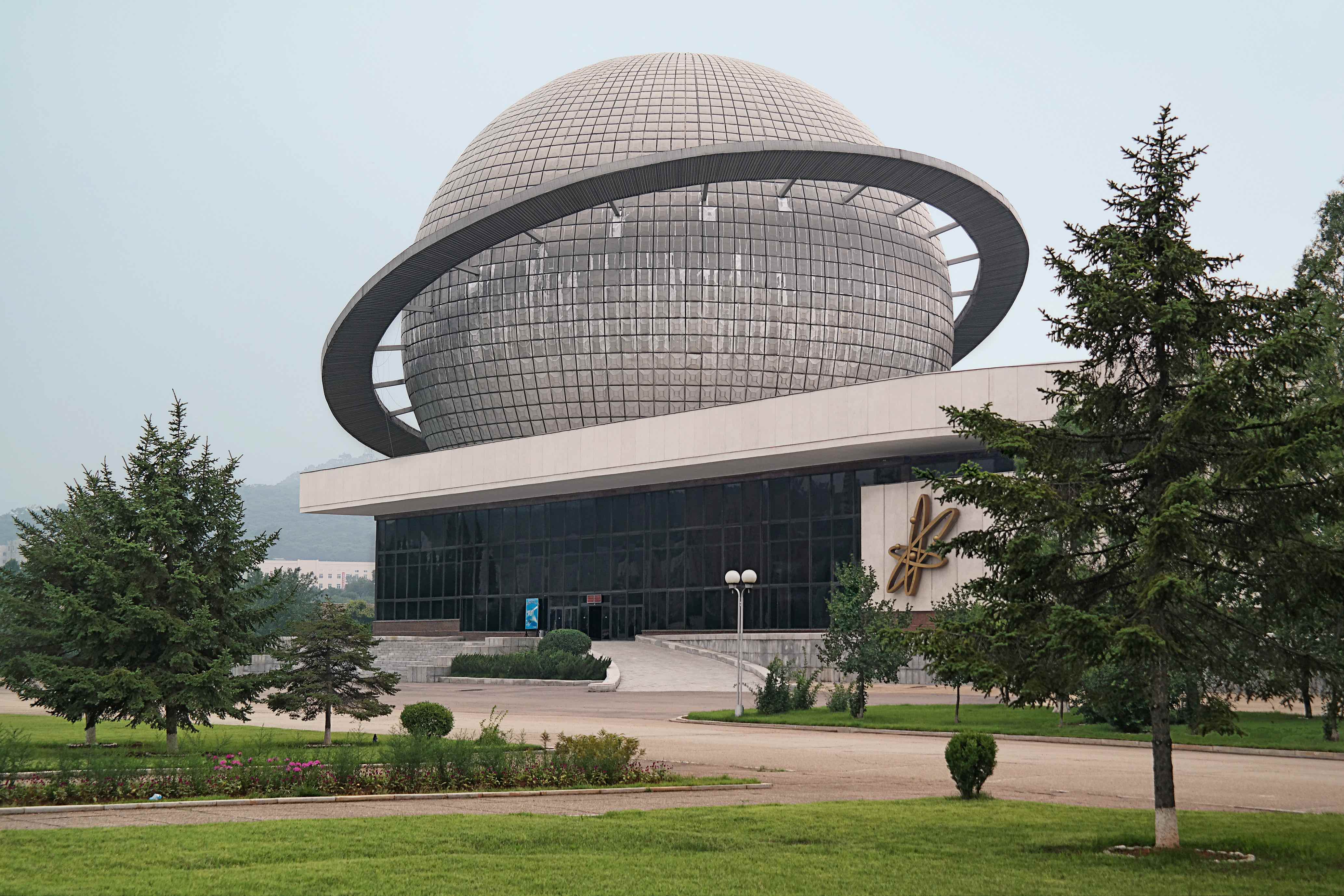 The planetarium forms part of the Three Revolutions Exhibition park, a grand expo campus built in 1992 to showcase the ideological, technological and cultural achievements of North Korea, from heavy industry and mining to agriculture and electronics. The Three Revolutions movement started in 1973, when Party activists went around the country campaigning “to raise the ideological level of the people, equip the economy with modern techniques and to lift the people’s technological and cultural level.” 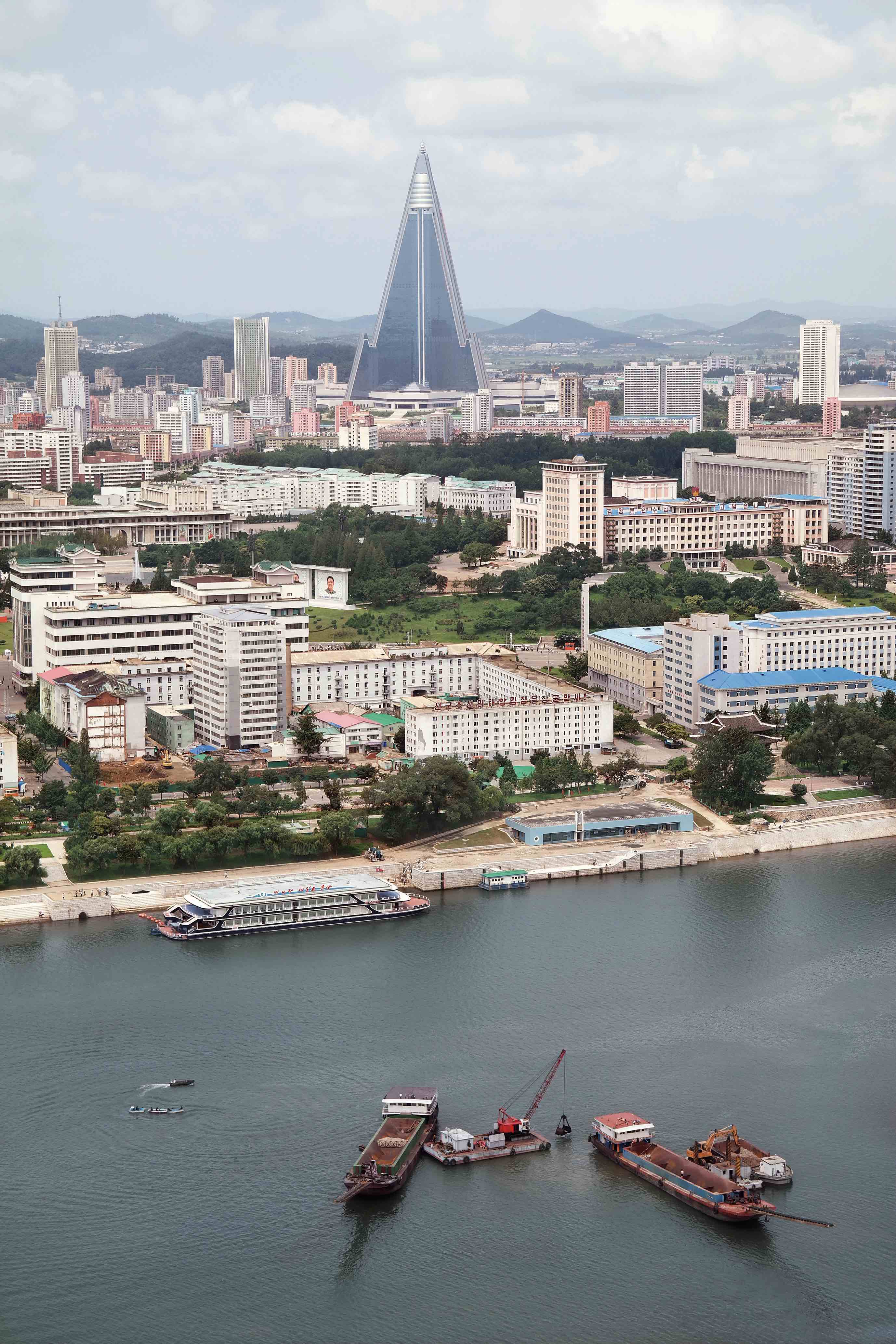 Begun in 1987 but still unopened, the Ryugyong Hotel was intended to house 3,000 bedrooms and five revolving restaurants. It stood on the Pyongyang skyline for years as a concrete carcass, nicknamed the “hotel of doom”, but was finally clad with mirrored glass in 2012 as part of a deal with an Egyptian telecoms company. 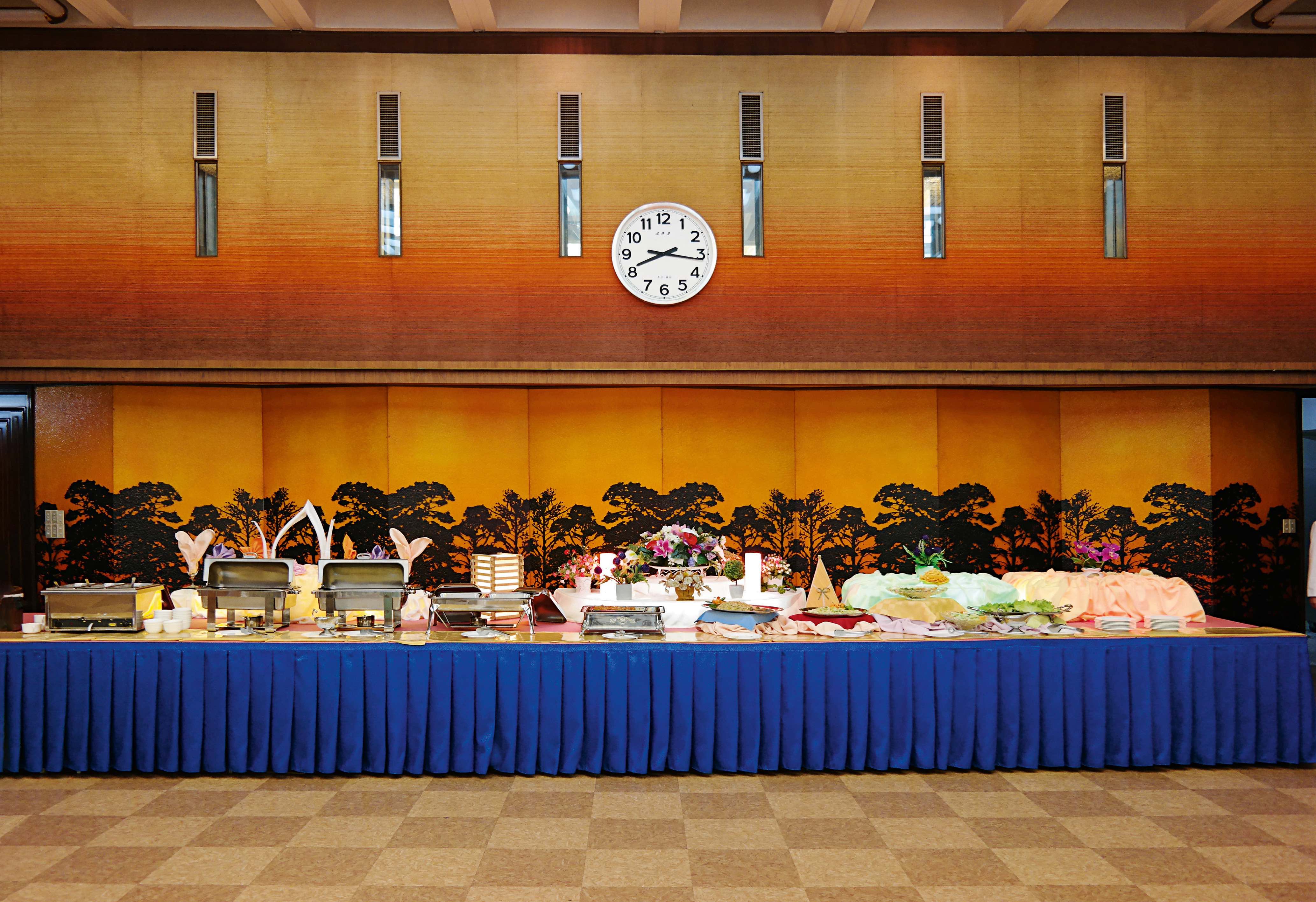 The breakfast buffet in the Koryo Hotel could be straight from a Wes Anderson film set. Built in 1985 as the main hotel for visiting foreigners, its twin 45-storey towers, connected by a bridge, are an iconic presence on the Pyongyang skyline. With a total of 500 rooms, the hotel also has a bookshop, movie room and banquet rooms, as well as a casino and “wading pool” in the basement. Both towers are crowned with revolving restaurants, although one is off limits as it overlooks a residential area of the Pyongyang elite. 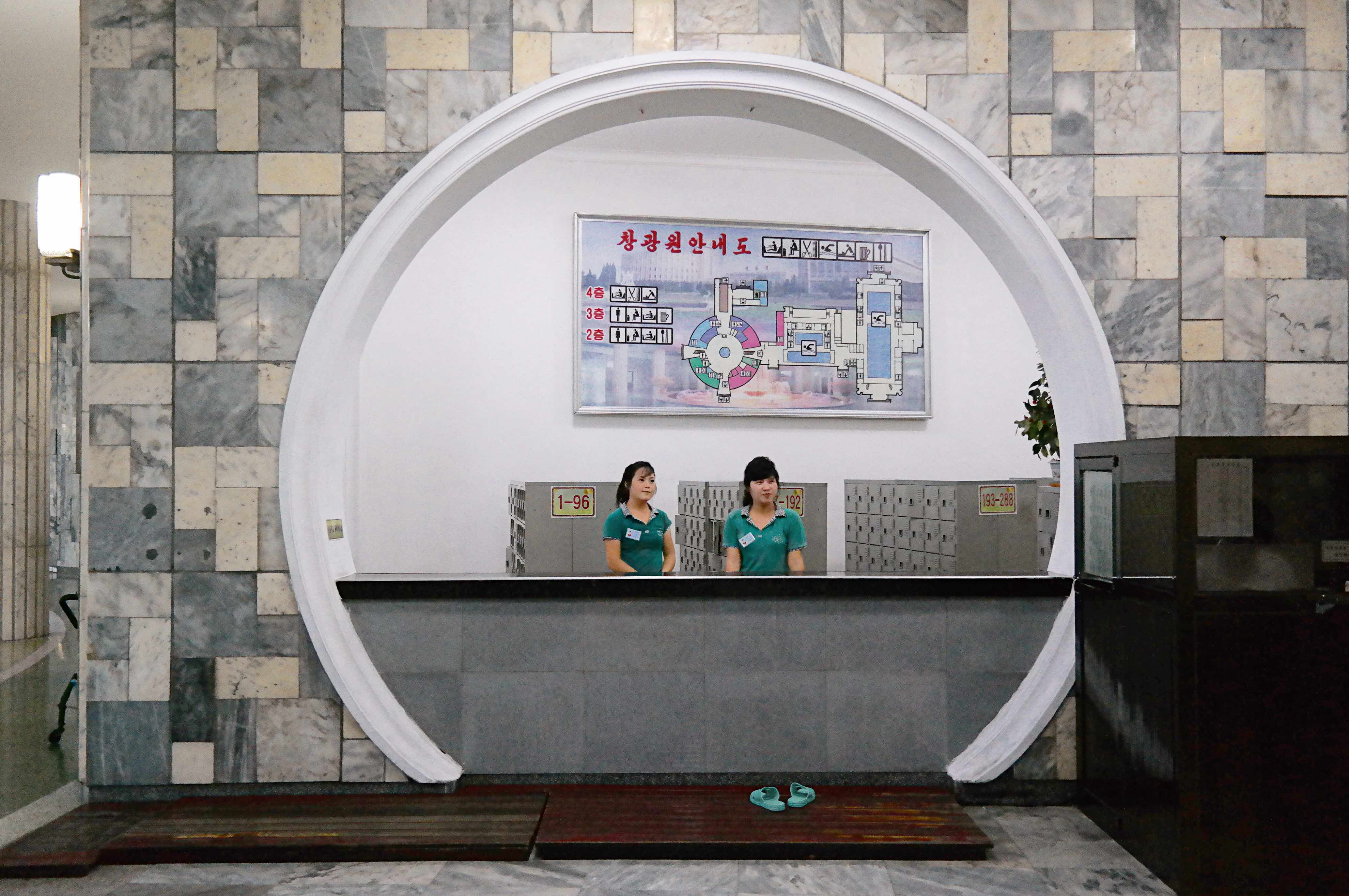 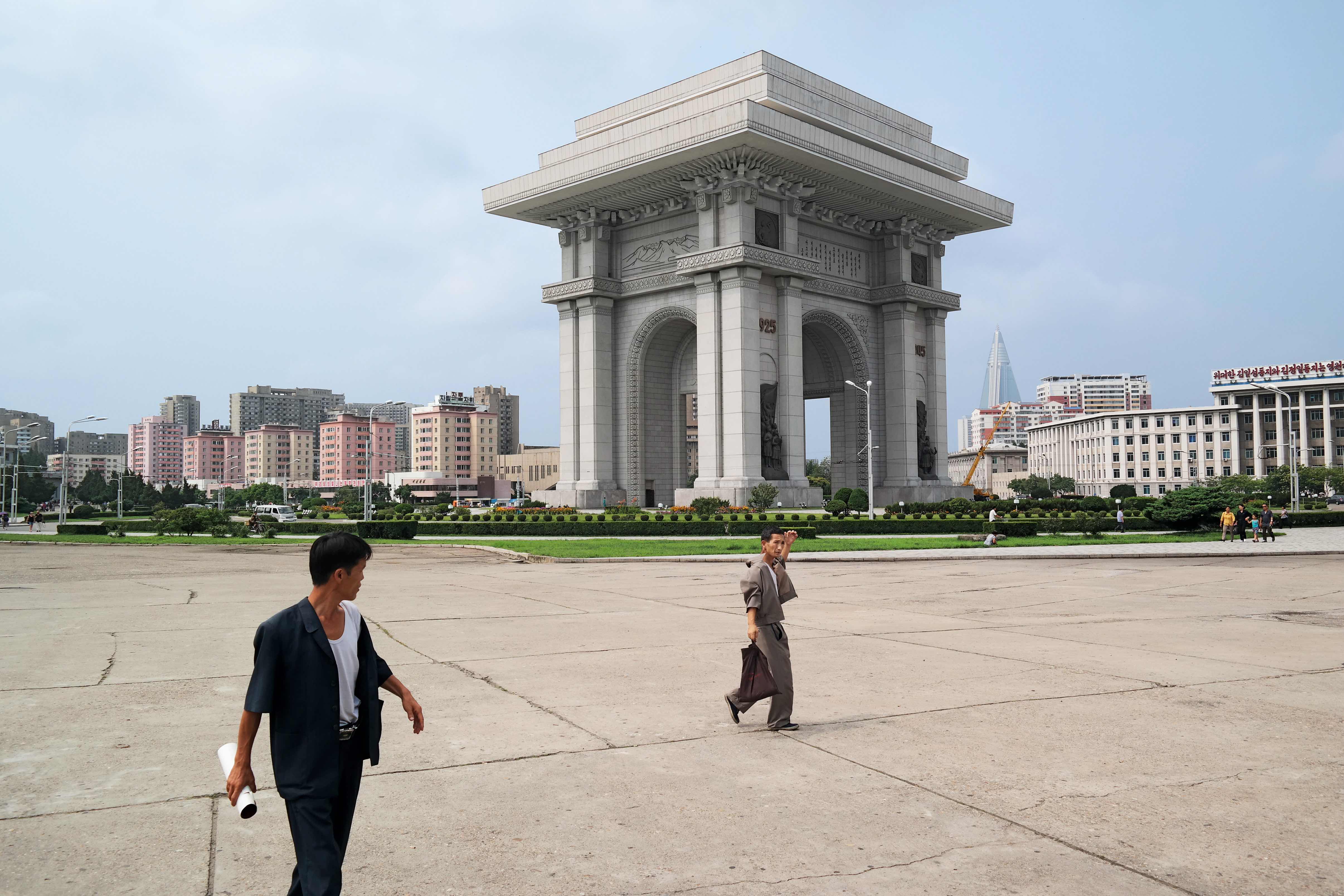 The Arch of Triumph (modelled on the Arc de Triomphe in Paris, but reputedly 10 metres taller because of its great triple-decker stack of rooftops) is built from 25,550 blocks of white granite, representing the number of days of Kim Il Sung’s life on his 70th birthday, when the structure was unveiled in 1982. It was built on the site where Kim Il Sung entered Pyongyang in 1945 to be greeted by cheering Koreans, marking the end of the Japanese occupation and the beginning of socialism.

Inside North Korea is available now on Taschen.

Linkedin
RELATED ARTICLES
OTHER ARTICLES
From the queues outside to the last ones standing, Francesco Mellina’s new photo book follows a night that has gone down in the Northern-Soul history books.
The photographer reflects on building trust with his subjects and using the street as his studio.
With abuse of call-centre staff on the rise, many are now speaking out about the hostility they’ve faced.
Ahead of the policing bill reaching its final stages in the Lords, protestors came together to rally against the legislation.
While police claim that body cams increase accountability, the proliferation of the tech raises questions over who it really serves.
Photographer Melanie Nissen recalls capturing the characters, fashions and rarefied chaos of a rapidly-expanding set of punk bands who helped to redefine the genre.