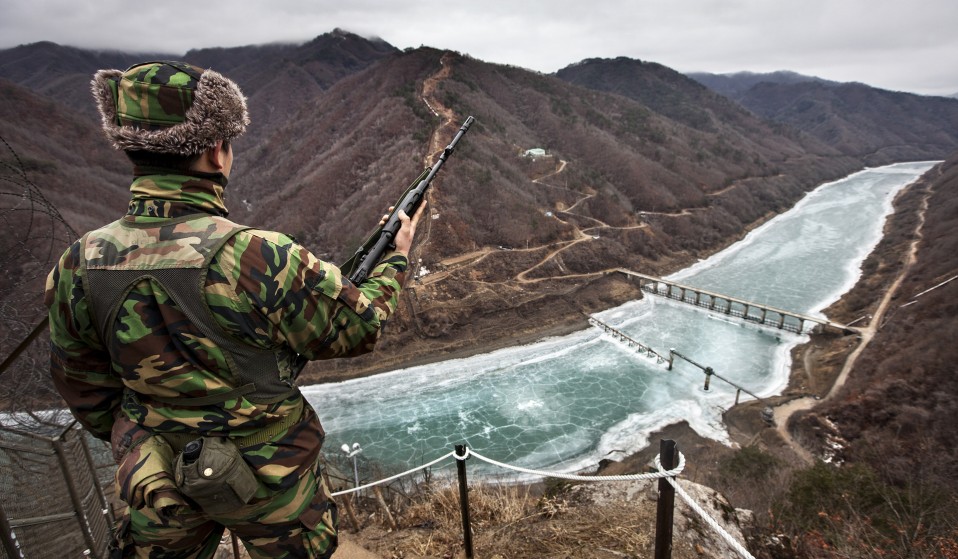 At 248 km long, the Demilitarized Zone (DMZ) is a vast, high-security buffer zone between the South and North. Photographer Park Jongwoo gets unconditional access.

At 248 km long, the Demilitarized Zone (DMZ) is a vast, high-security buffer zone between the South and North. Photographer Park Jongwoo gets unconditional access.

On June 25, 1950, Korea was torn apart by civil war. Though the fighting went on for 37 months, the war never ended, as both sides refused to sign a formal peace agreement. Instead, they constructed the Demilitarized Zone (DMZ), a 248 km long, 4 km wide buffer zone – the site of a fully armed Cold War that begins a mere 60 km from downtown Seoul.

Here, forests are filled with landmines and barbed wire fences, patrolled by military armed with rifles, the only weapons allows inside the DMZ.  Civilians are prohibited from entering the DMZ, which unfolds like circles of hell, from the furthest areas of the Civilian Control Zone, all the way to the Military Demarcation Line, where the two nations stand in a 60-year face off.

In 2010, on the 60th anniversary of the war, the Korean Ministry of National Defense decided to make the first photographic record of the DMZ ever. Photographer Park Jongwoo was tapped for the job, giving him unconditional access to the South Korean Guard Posts (GPs) on the site, the results of which have just been published in DMZ: Demilitarized Zone (Steidl). 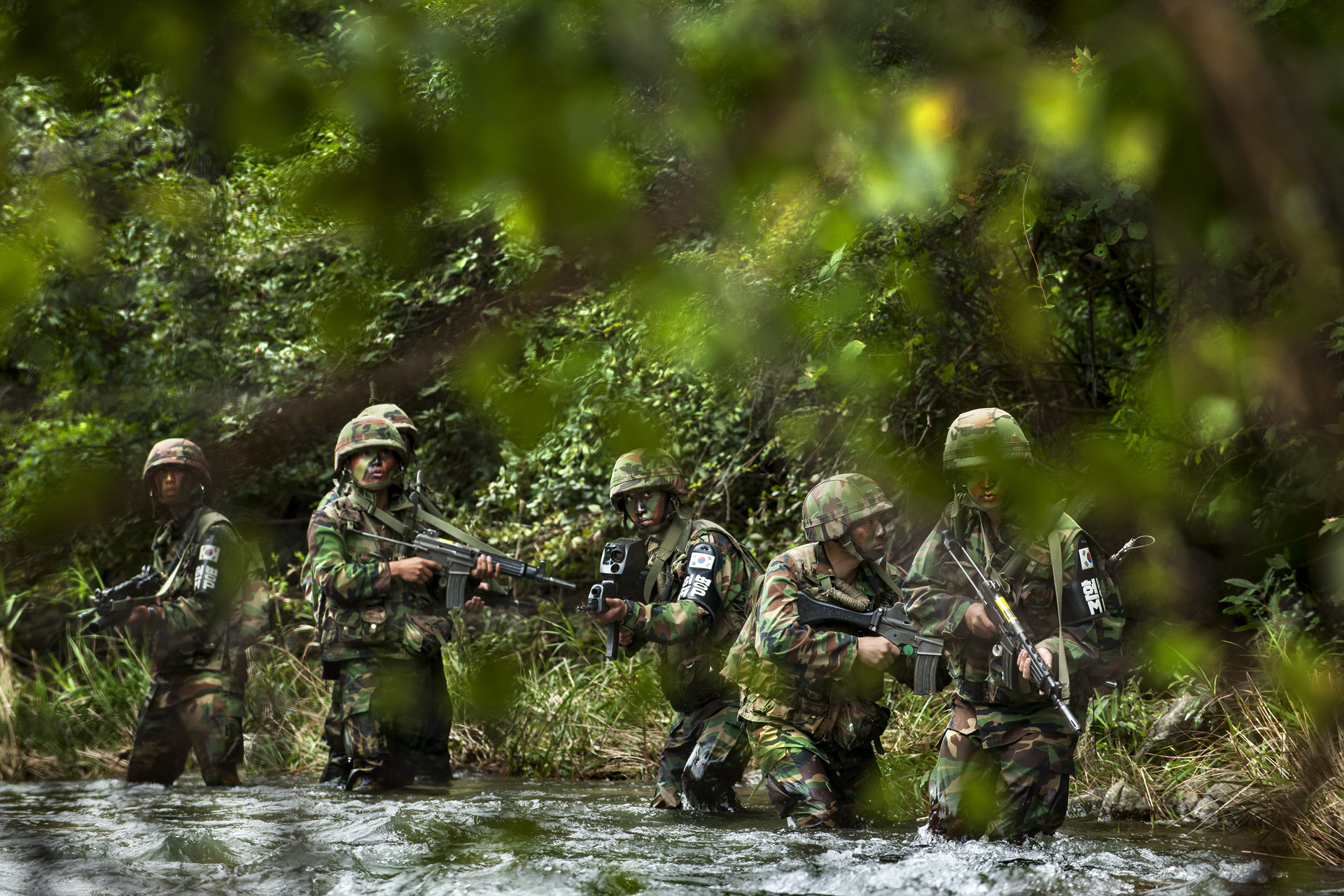 Camouflaged South Korean squad along the stream inside of the DMZ. 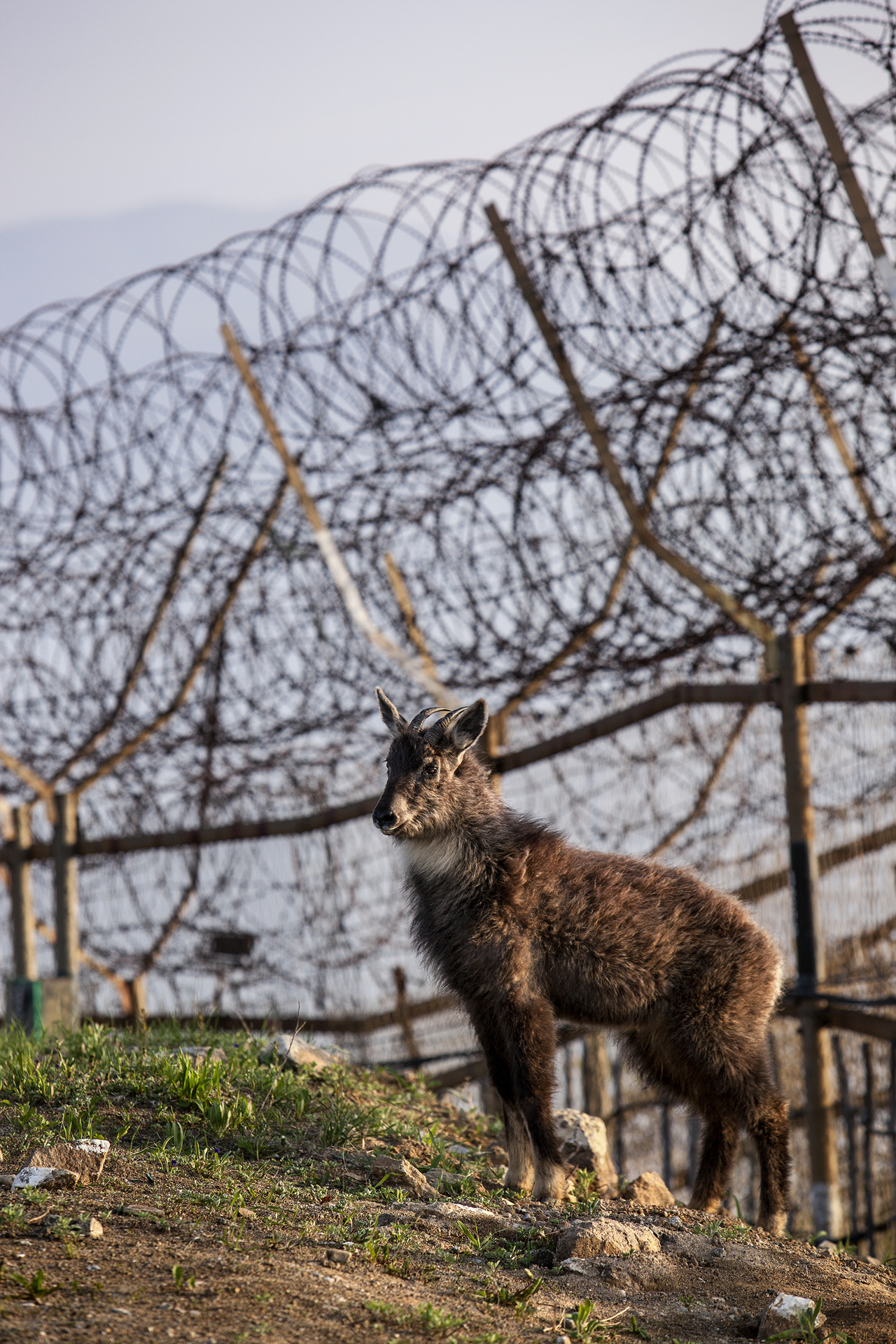 Endangered mountain goat stands in front of the barbed wire fence of the SSL, which is the southern border of the DMZ.

“Every visit was planned months before and to every minute detail,” Jongwoo reveals. “It was impossible to change the pre-arranged schedule on any occasion, even in the bad weather.” Jongwoo would arrive at the checkpoint of the Civilian Control Line, brought to a General Outpost for safety education, and outfitted with a bulletproof helmet and jacket before boarding a Jeep, which travelled in an armed motorcade through the few areas of the DMZ where landmines were usually – but not always – removed.

“There is no actual ‘border,’ like a barbed wire fence, between the South and North inside DMZ,” Jongwoo explains. “You can run into North Korean patrols any time. Some locations are within firing range of the North Korean soldiers – there is no time for taking any picture in these spots.”

Jongwoo’s portrait of the DMZ is a world unto itself, removed from the propagandistic images distributed by the North Korean government. “In the early morning, you could see the North Korean soldiers tired from last night’s guard nodding off, trying to get rid of head lice, or raising crops due to insufficient food supplies. You would not imagine them to fight in a war properly,” he reveals. 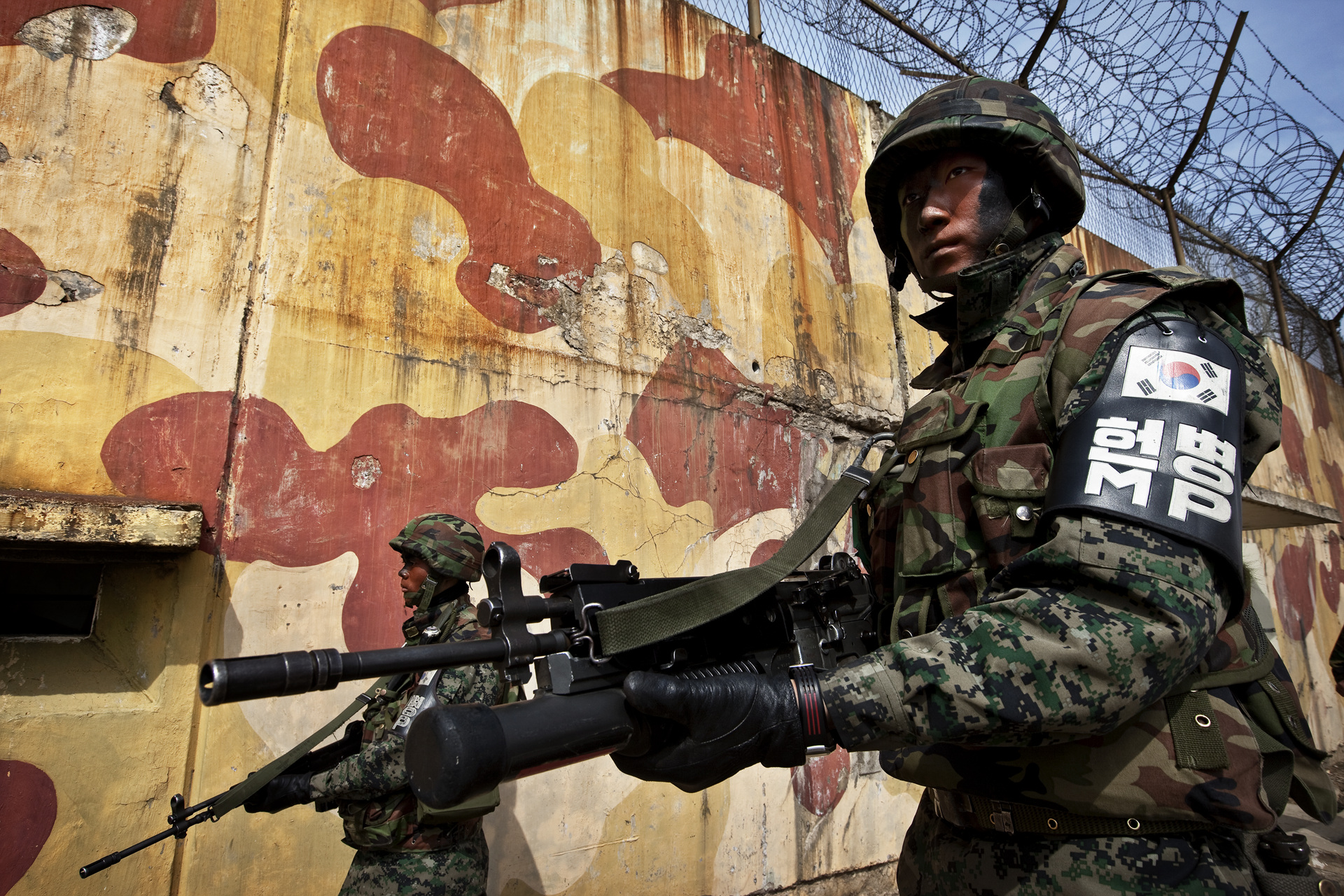 Fully armed soldiers are ready to out of GP (Guard Post) for reconnaissance mission. 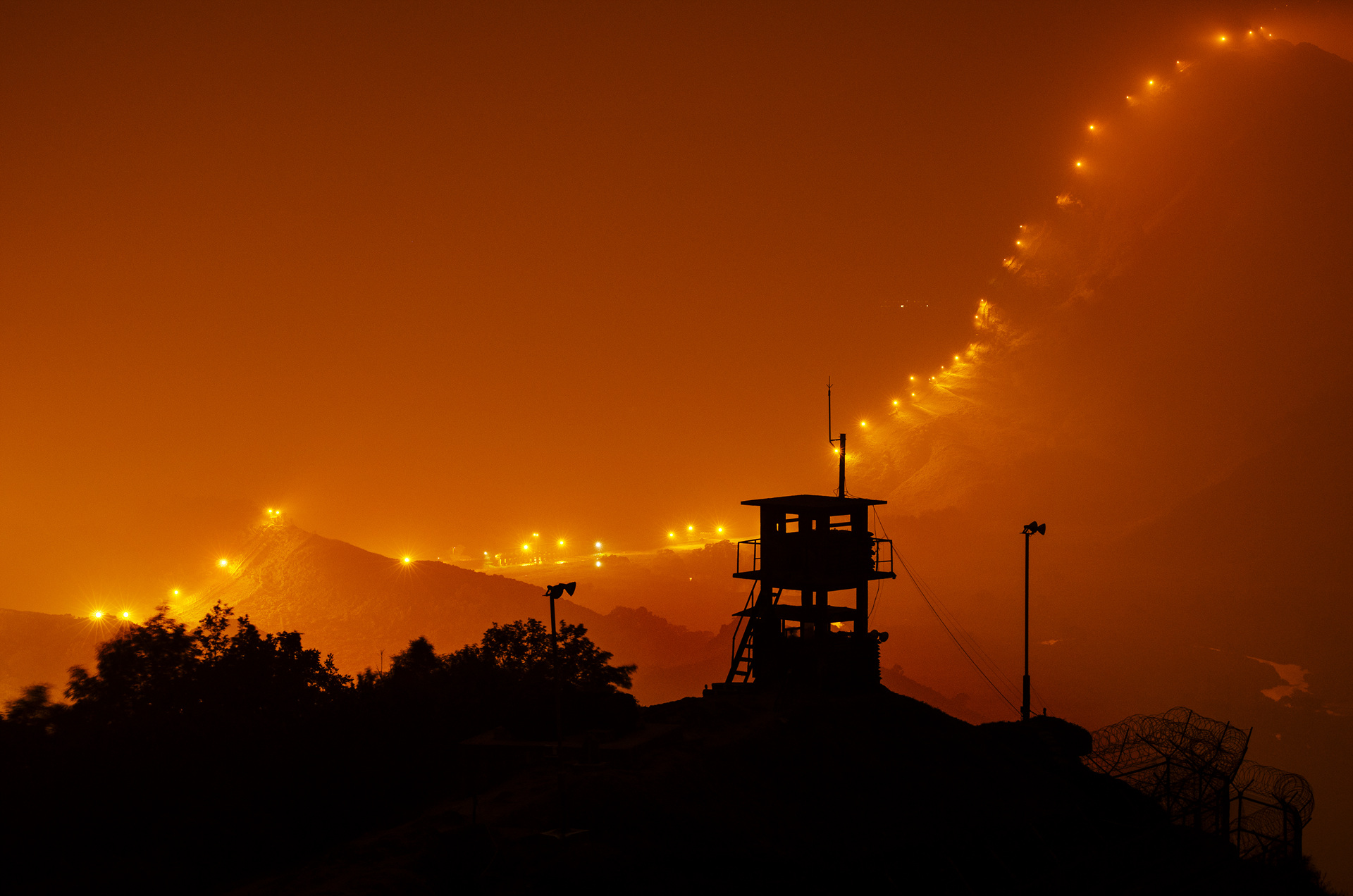 While working on the project, the North Korean Army found out about Jongwoo’s work. “I guess they had observed me carrying big telephoto lens. They told the Military Armistice Commission that they would fire an aimed shot if I kept photographing inside the DMZ,” Jongwoo remembers. “They also warned the US and South Korea that ‘those tension-increasing acts’ might cause ‘an unexpected circumstance such as damage of human life.’”

Despite these threats, the project continued and the work was published with minimal censorship. Jongwoo was asked to delete a few photos of specific military facilities. The result is a portrait of a surreal landscape, one that nature has reclaimed as the once-inhabited land has reverted to its original state. Over the past decades, the DMZ has become one of the world’s best-preserved habitats, home to endangered species of flora and fauna peacefully co-existing with landmines and armed soldiers. “Time went backwards,” Jongwoo observes. 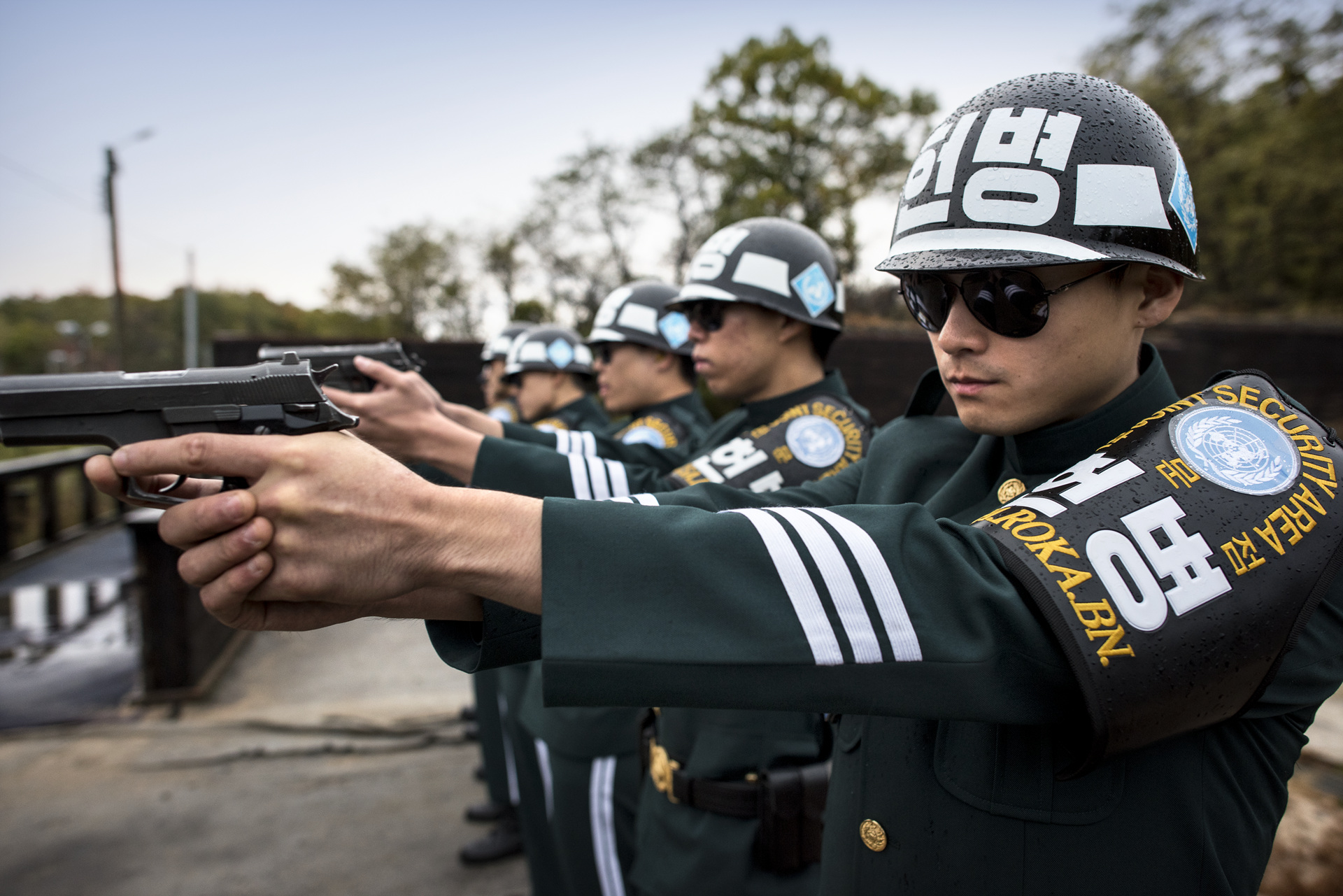 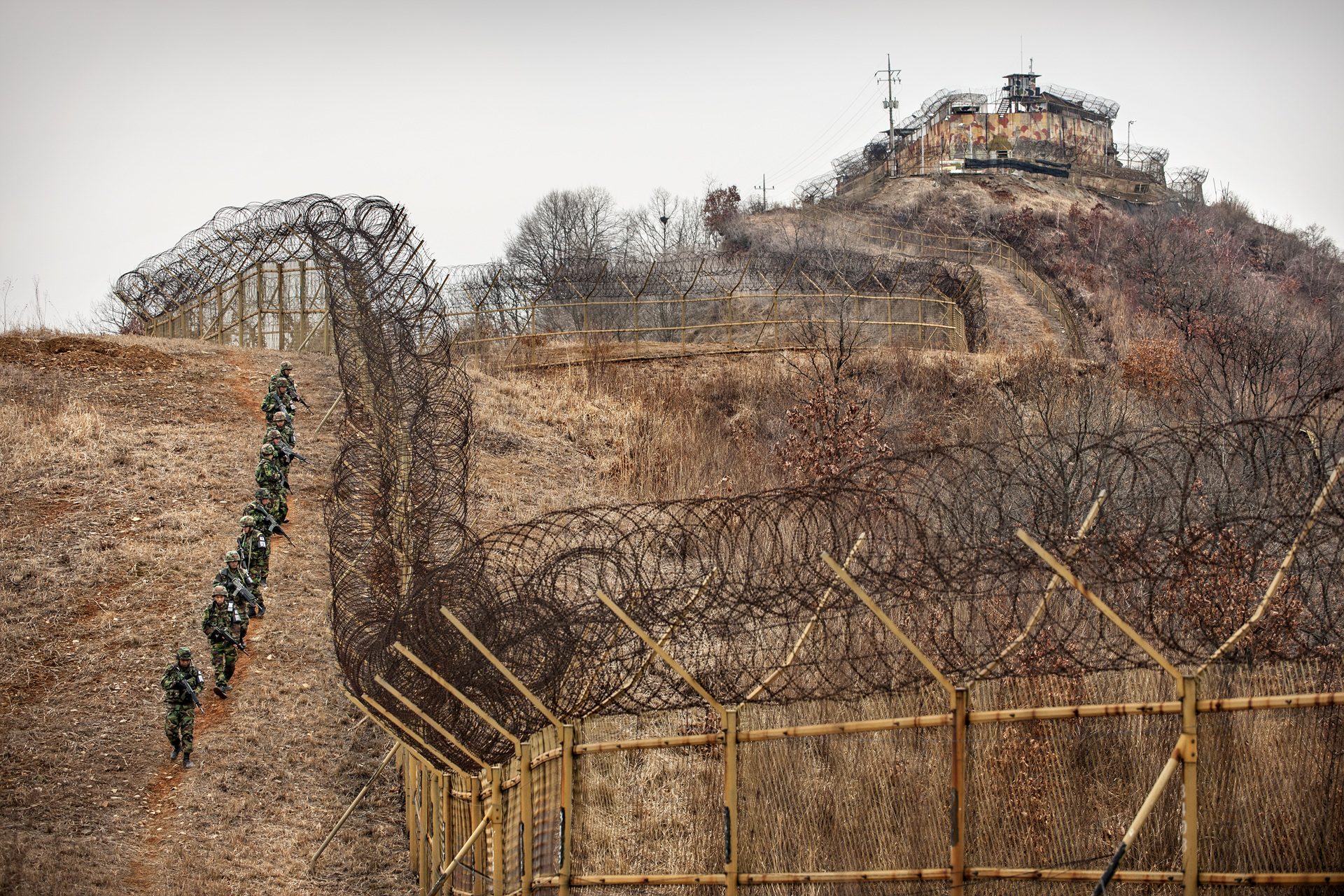 Squad along the barbed-wire fence of South Korean GP inside of the DMZ. 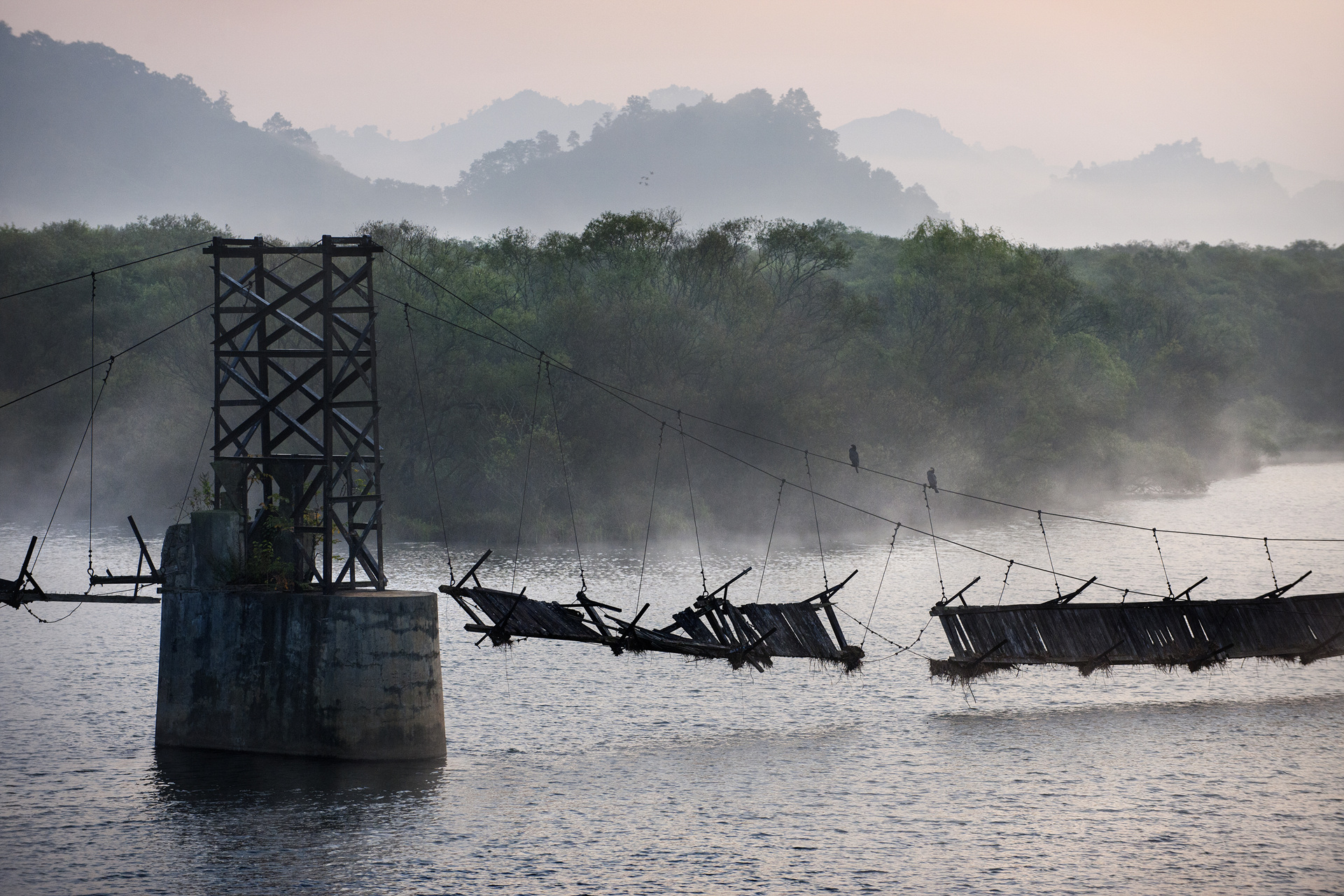 Abandoned bridge remains untouched since 1953 armistice. No human beings can enter this area. It became the resting place of migrating cormorants. 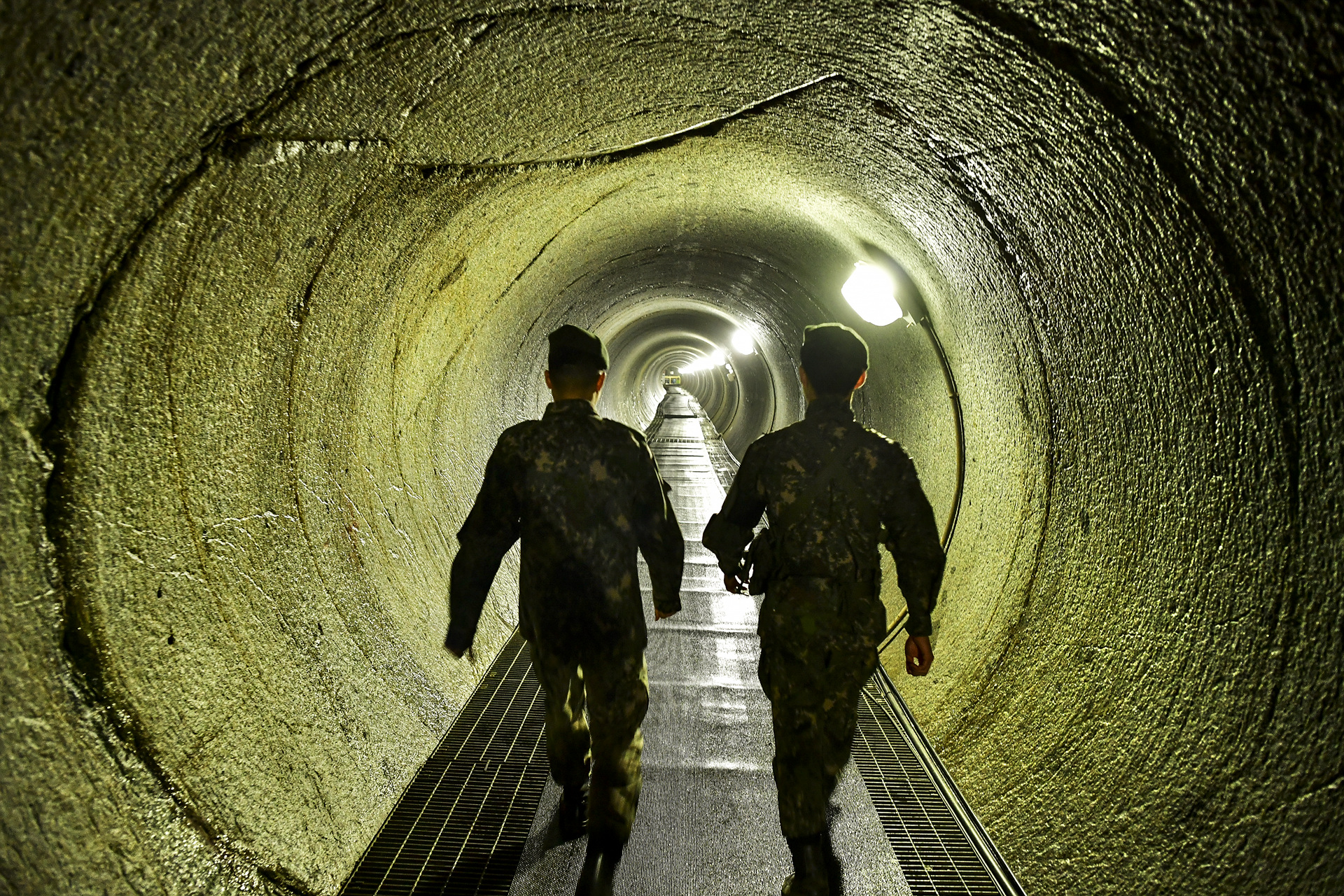 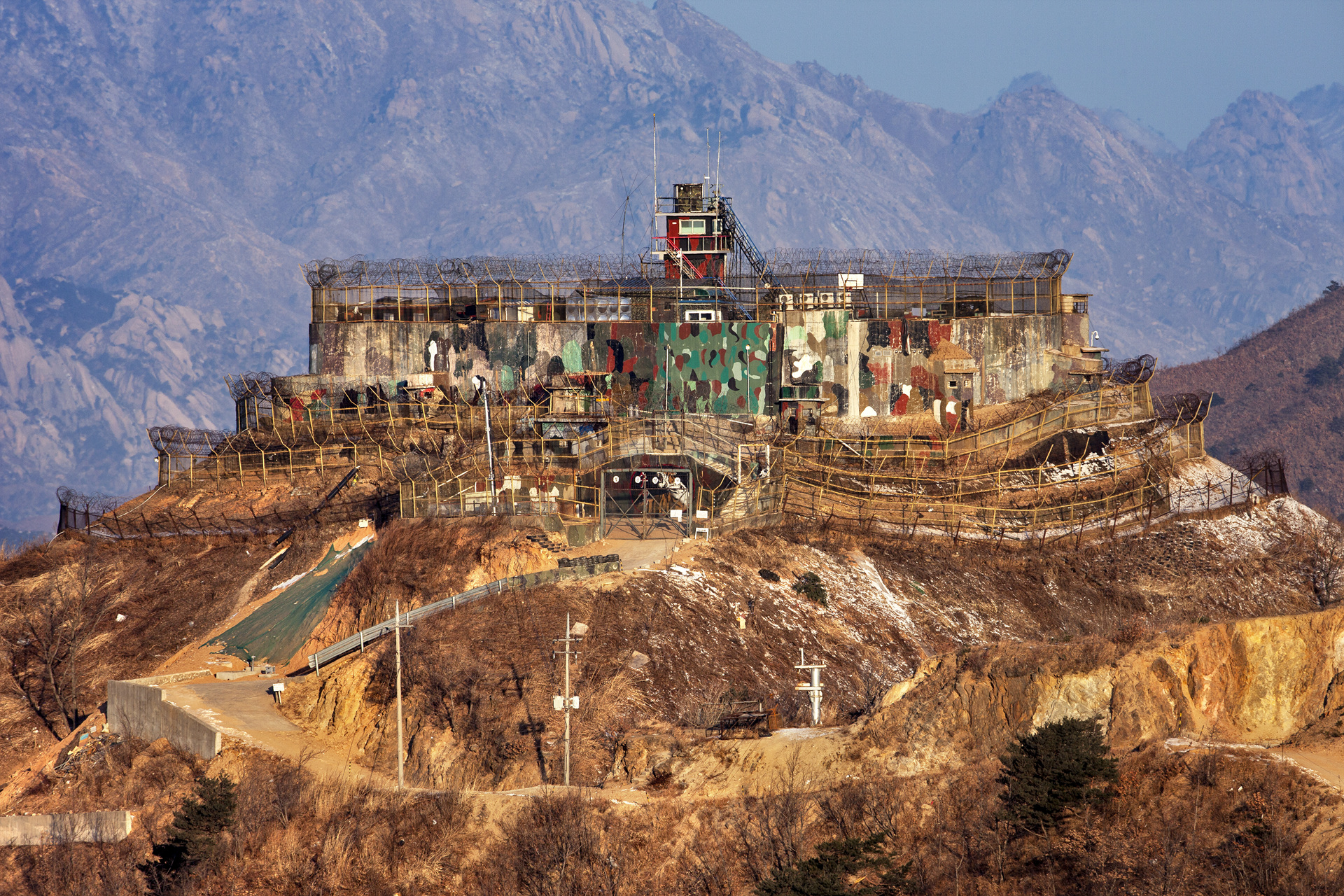 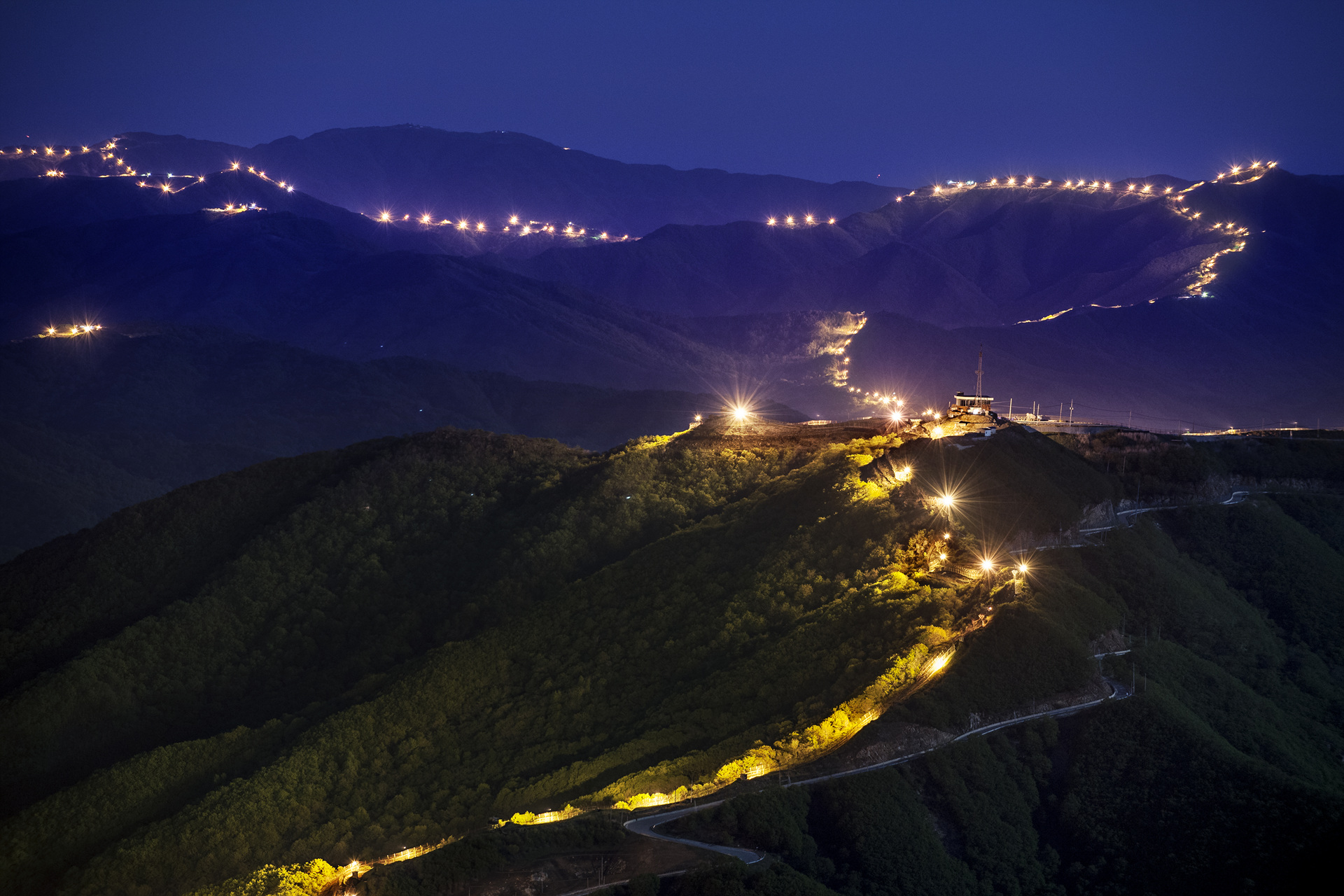 Anti-infiltration lighting illuminated along the SLL – the southern border of the DMZ at Yanggu area in the eastern part of the DMZ. The SLL traverses Korean peninsula from West to East.

Linkedin
RELATED ARTICLES
OTHER ARTICLES
As the Criminal Bar Association enters its fifth week of action, criminal barrister Russel Fraser explains why the legal professionals have walked out and how action is likely to escalate.
Steel City is often overlooked when it comes to the country's cultural radar despite its role in shaping electronic music.
With the virus now a global health emergency, we must take steps to fight misinformation and demand a swift UK-wide vaccine roll out, writes Phil Samba.
A new series of photos by Johny Pitts shines a light on communities and subcultures that have all too often been overlooked.
From the chip shops, to the bingo parlors and burlesque dancers, photographer Mike Coles remembers capturing scenes of holidaymakers by the English coast.
In the latest instalment of Photographers in Conversation, the creator talks portraiture, platforms and taking inspiration from Little Simz.