Art & Culture / Photography / Inside one of America’s most notorious prisons 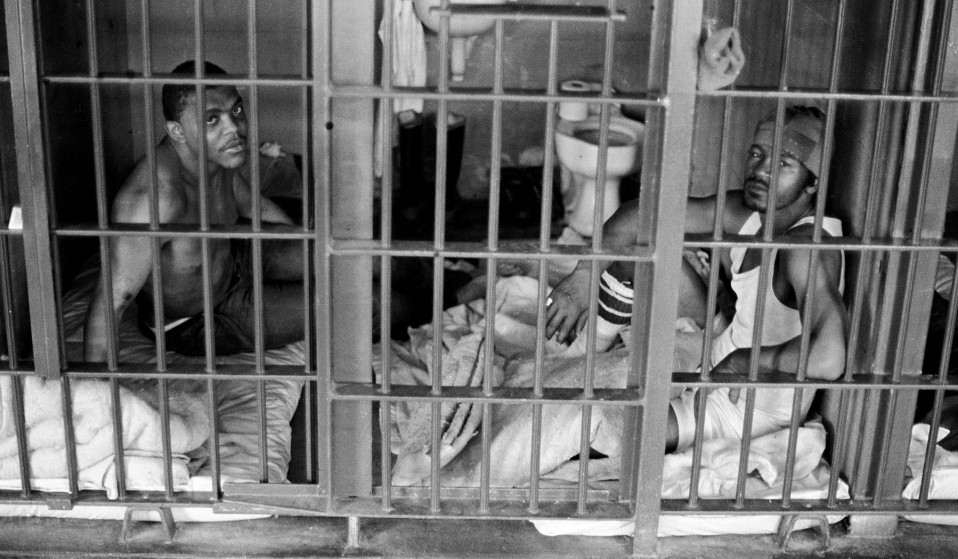 Keith Calhoun and Chandra McCormick’s contemporary photographs of the Louisiana State Penitentiary – otherwise known as ‘The Farm’ – uncover an undeniable truth: slavery in the US has never truly ended.

Keith Calhoun and Chandra McCormick’s contemporary photographs of the Louisiana State Penitentiary – otherwise known as ‘The Farm’ – uncover an undeniable truth: slavery in the US has never truly ended.

At 7,300 hectares, the Louisiana State Penitentiary – the largest maximum-security prison in the United States – is home to 6,300 prisoners. The inmates are forced to work the land under the 13th Amendment of the constitution, which legalises slavery in the case of incarceration.

The penitentiary is one of the most prominent examples of how slavery has evolved in the United States, a nation that leads the world in profiting off the prison industrial complex. With more than 2.2 million people living behind bars, America accounts for 25 per cent of the prisoners on earth, despite having just 5 per cent of the world’s population.

Commonly known as “Angola,” the penitentiary took its name after the country of origin for countless men, women, and children who were brutally enslaved and brought against their will to work on the pre-Civil War plantation where the prison now sits. The prison has another nickname, just as evocative: it is called “The Farm” to describe the labour inmates are forced to work, generating as much as 1,814 metric tons of cash crops every year. 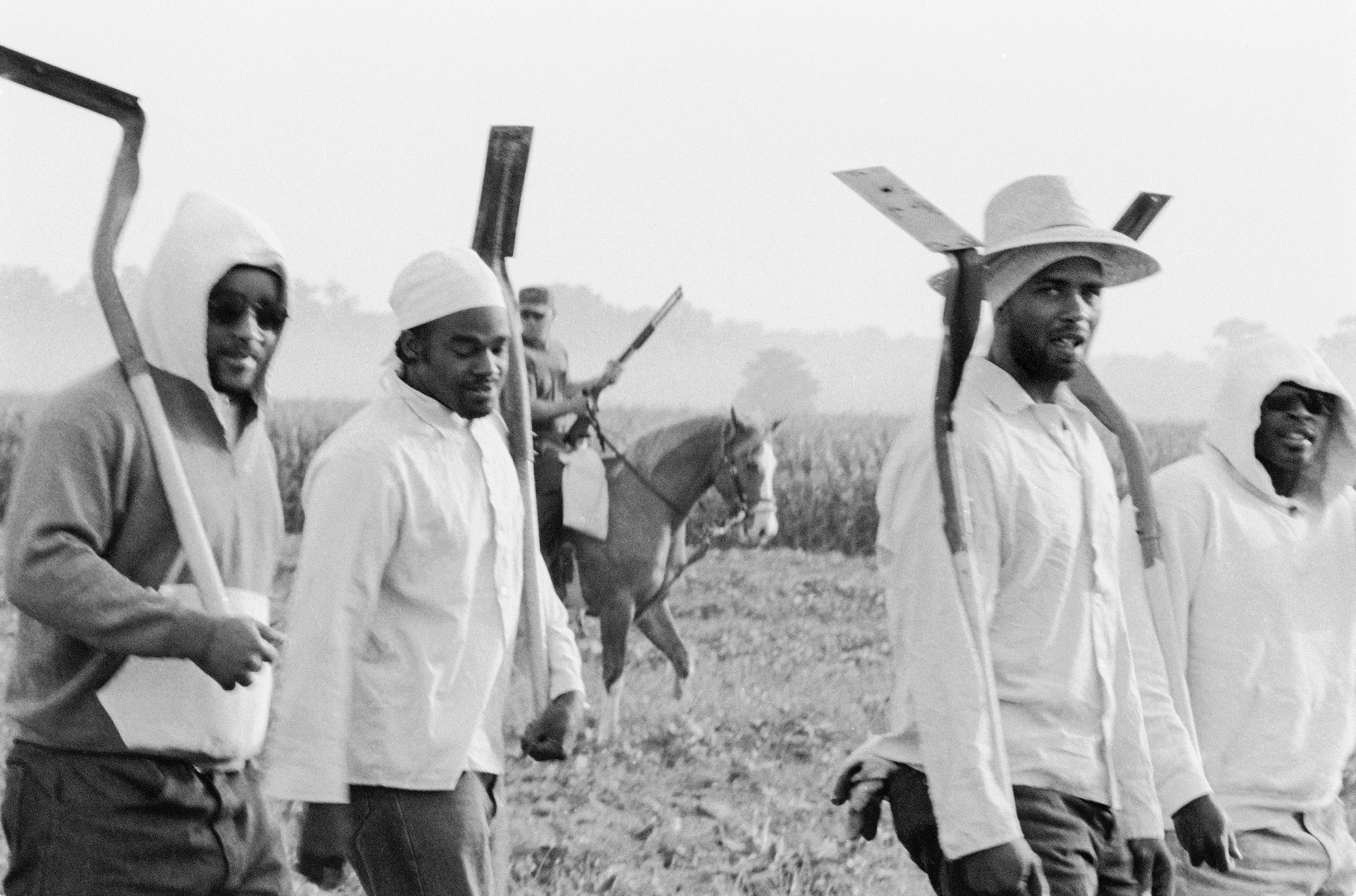 Chandra McCormick. MEN GOING TO WORK IN THE FIELDS OF ANGOLA, 2004.

In 1980, the husband-and-wife team of Keith Calhoun and Chandra McCormick began visiting The Farm to document the lives of prisoners forced to live and work in inhumane conditions. Over the next four decades they have continued their work, a selection of which is currently on view in Slavery, the Prison Industrial Complex at the Frist Art Museum until May 28, 2018. Photographs can also be seen in the catalogue Louisiana Medley, which will be released on April 24.

For Calhoun and McCormick, the work is personal. Born and raised in the lower ninth ward of New Orleans, the couple has been dedicated to documenting the people and culture of their native town, covering the music, the religious and spiritual ceremonies, the workers, and the displacement of African Americans following Hurricane Katrina.

“Keith and Chandra were living in the lower ninth ward when they began this project and they knew people sent to Angola,” Katie Delmez, Frist Art Museum curator explains. “On their visits, they were able to see some of the people they knew from the neighbourhood – including Glen Delmourelle, who they photographed in 1994 when he was given leave to attend his mother’s funeral. These photos show the impact of prison not just on the individual but also on the whole family. Fortunately, he is out now and able to live a second life.” 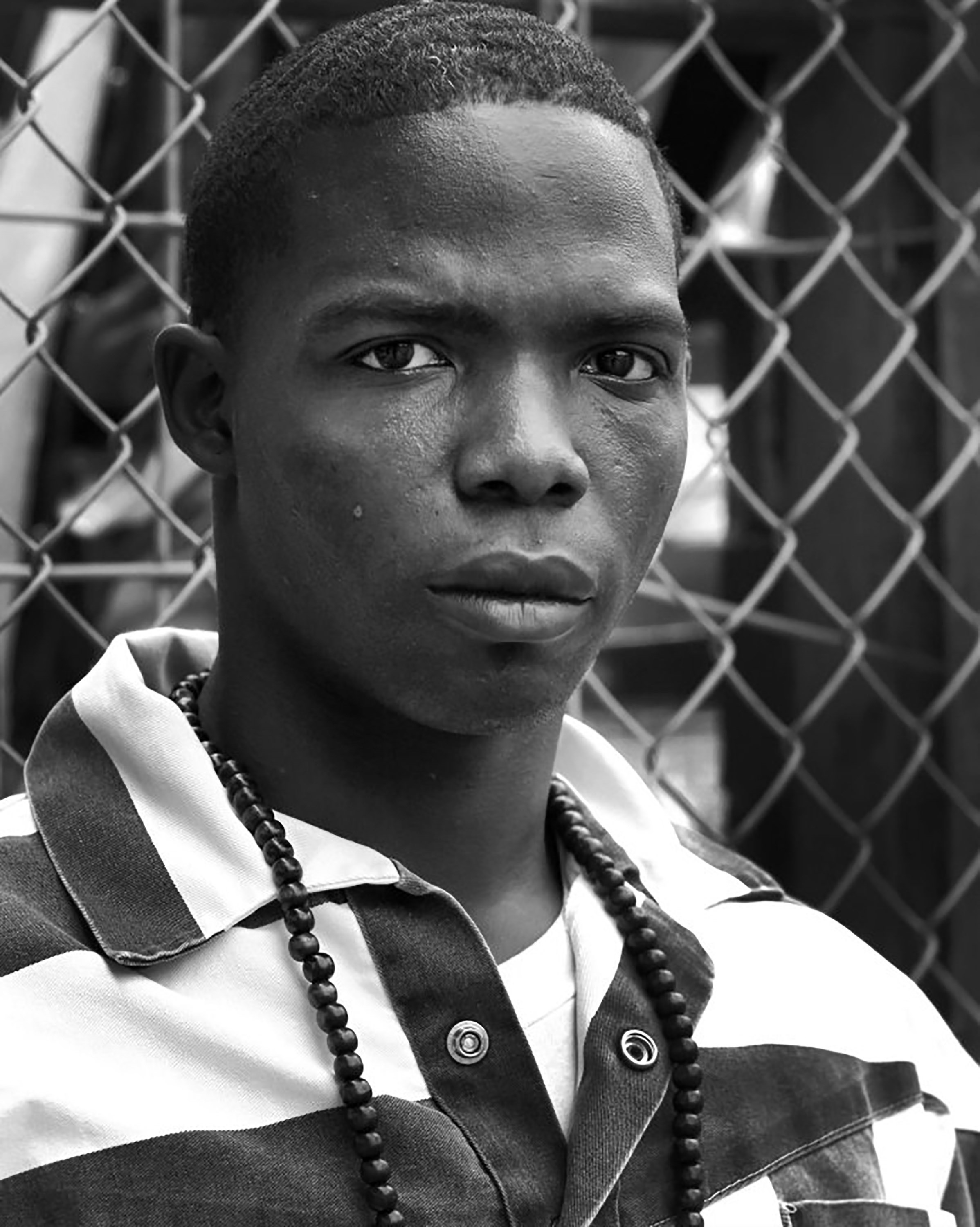 Slavery, the Prison Industrial Complex takes us inside The Farm, where we witness scenes of modern-day slavery, a highly profitable enterprise. “For me, the most startling aspect of this show is that when you look at the photographs of the men working in the fields, in particular, you think that must have been taken in the early 20th century but then you look at the date and you see 2008,” Delmez observes. “With the starkness of these images, the truth is undeniable: slavery never ended.”

Popular culture, with its love of police procedurals and law-and-order fables, has done its utmost to normalise scenes of black men as criminals. The work of Calhoun and McCormick provides a counter-narrative – one that is drawn on documentary evidence.

“What is so important about Keith and Chandra’s work is that it is not images of black men in prison jumpsuits, in chain gangs, or working in fields – there are also some very compelling and intimate portraits of these men,” Delmez reveals. “There is also the poignant image of the two young boys under the sign offering rides to Angola. You can’t dismiss it as fake news. My hope is that this exhibition will raise people’s awareness so that they will see how exploitative the prison system is.” 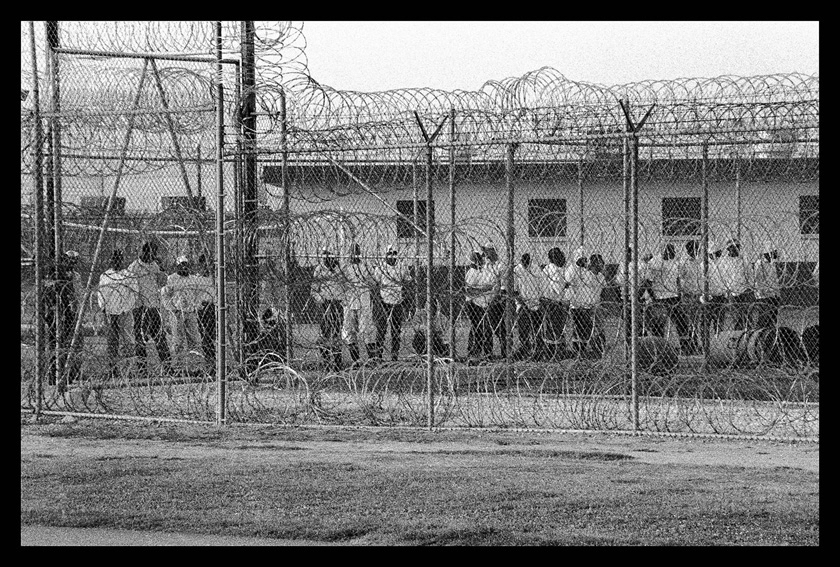 Chandra McCormick. WORK CALL, MEN BEHIND BARBED WIRE FENCING WAITING TO GO TO WORK IN THE FIELDS OF ANGOLA, 2004. 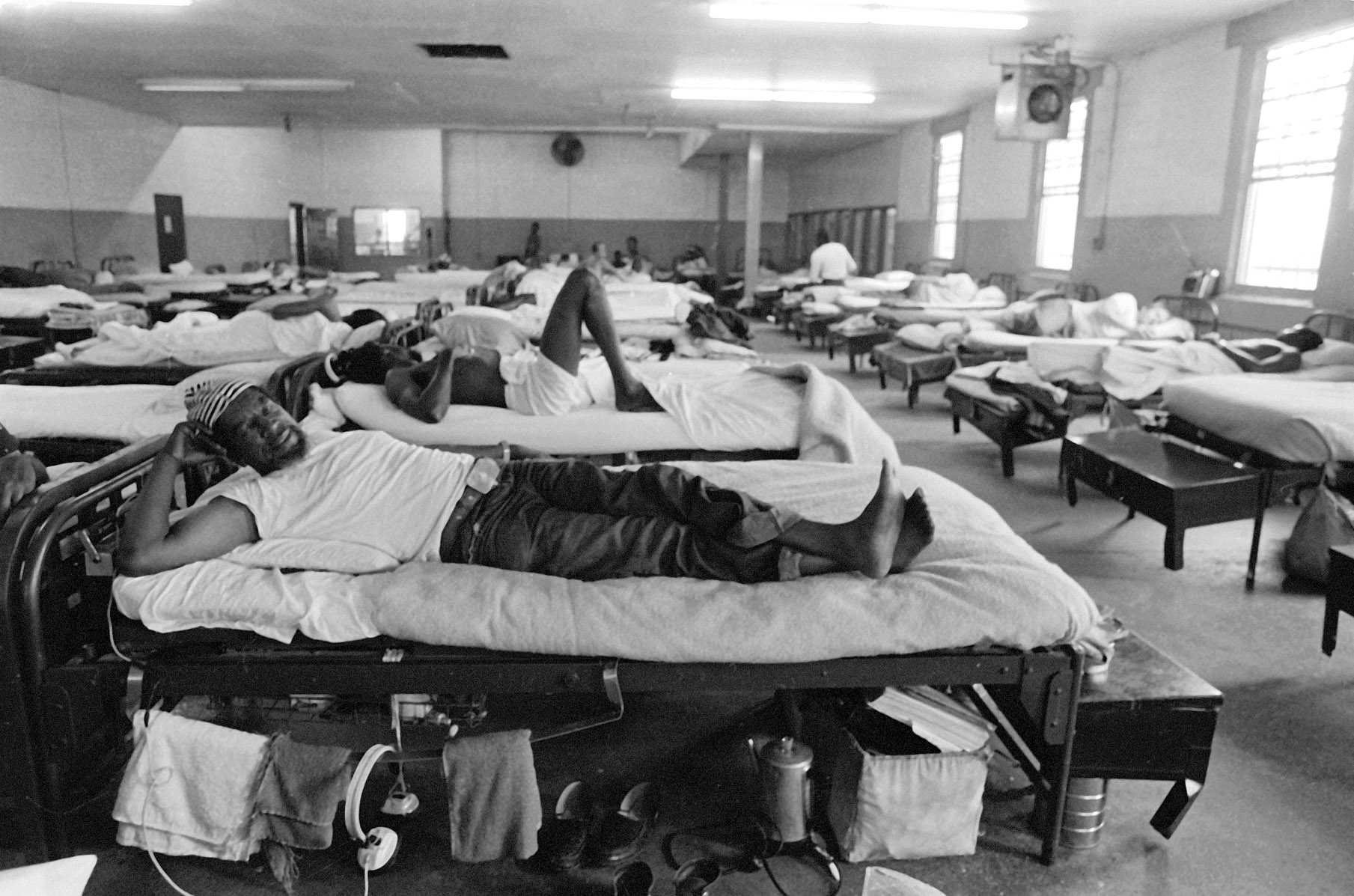 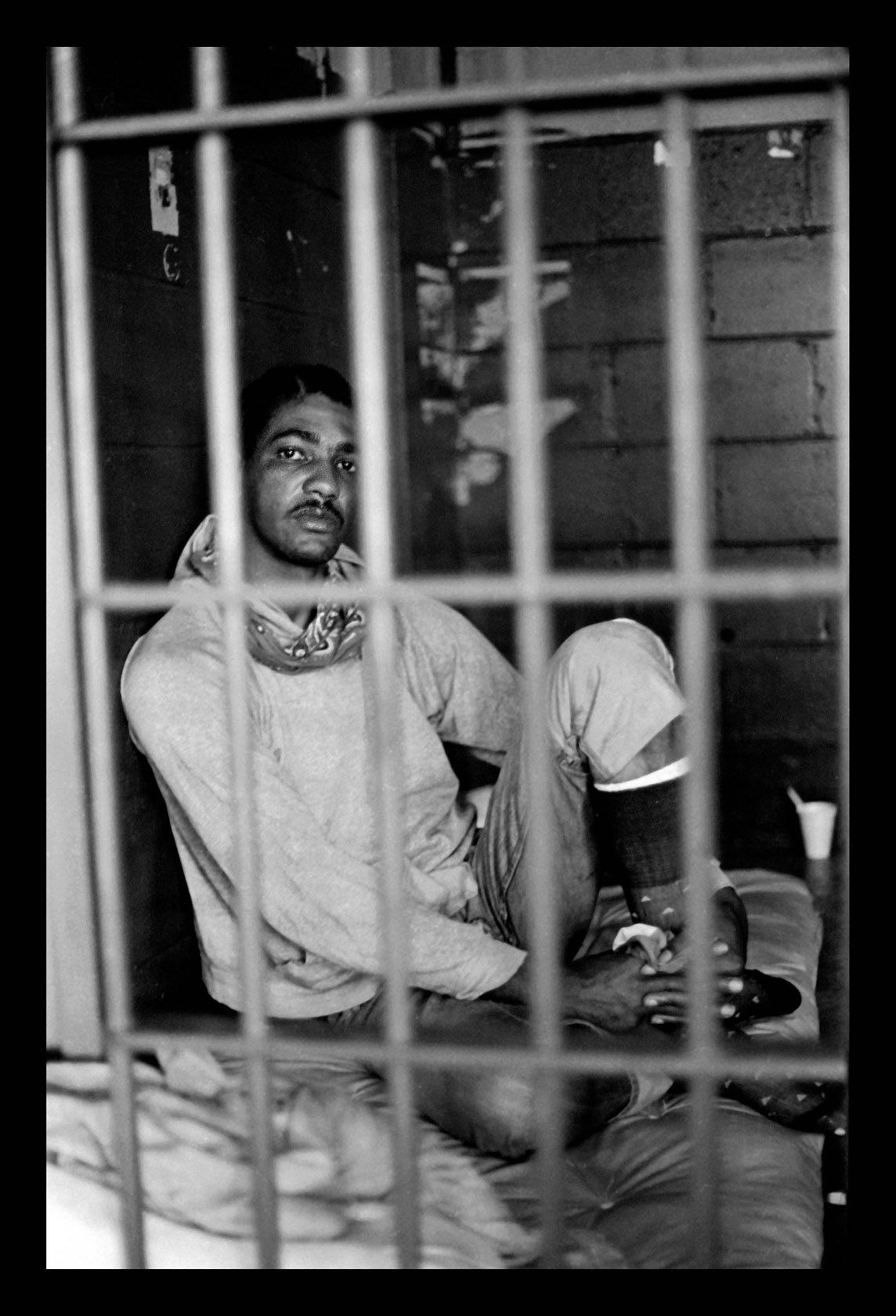 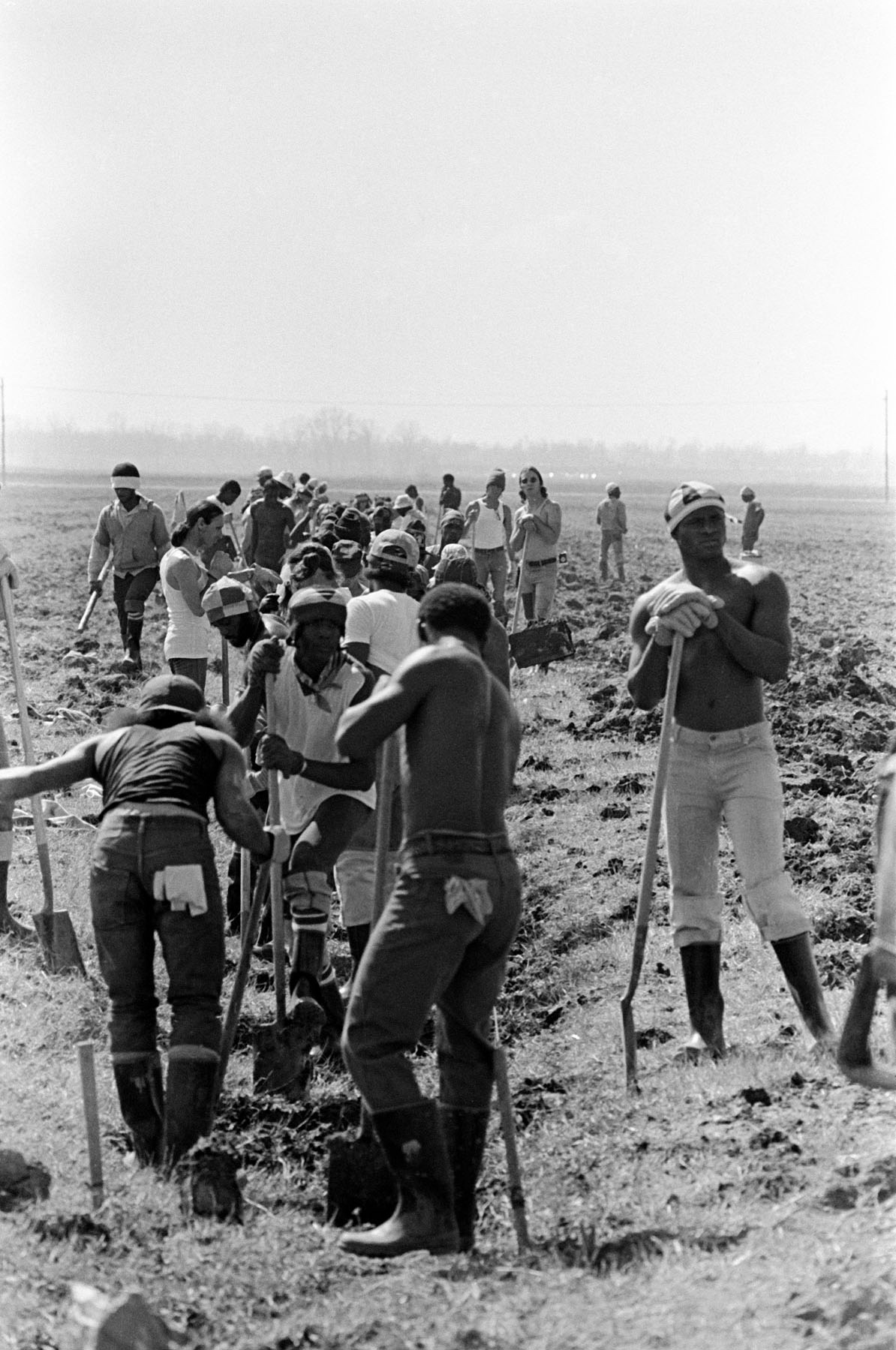 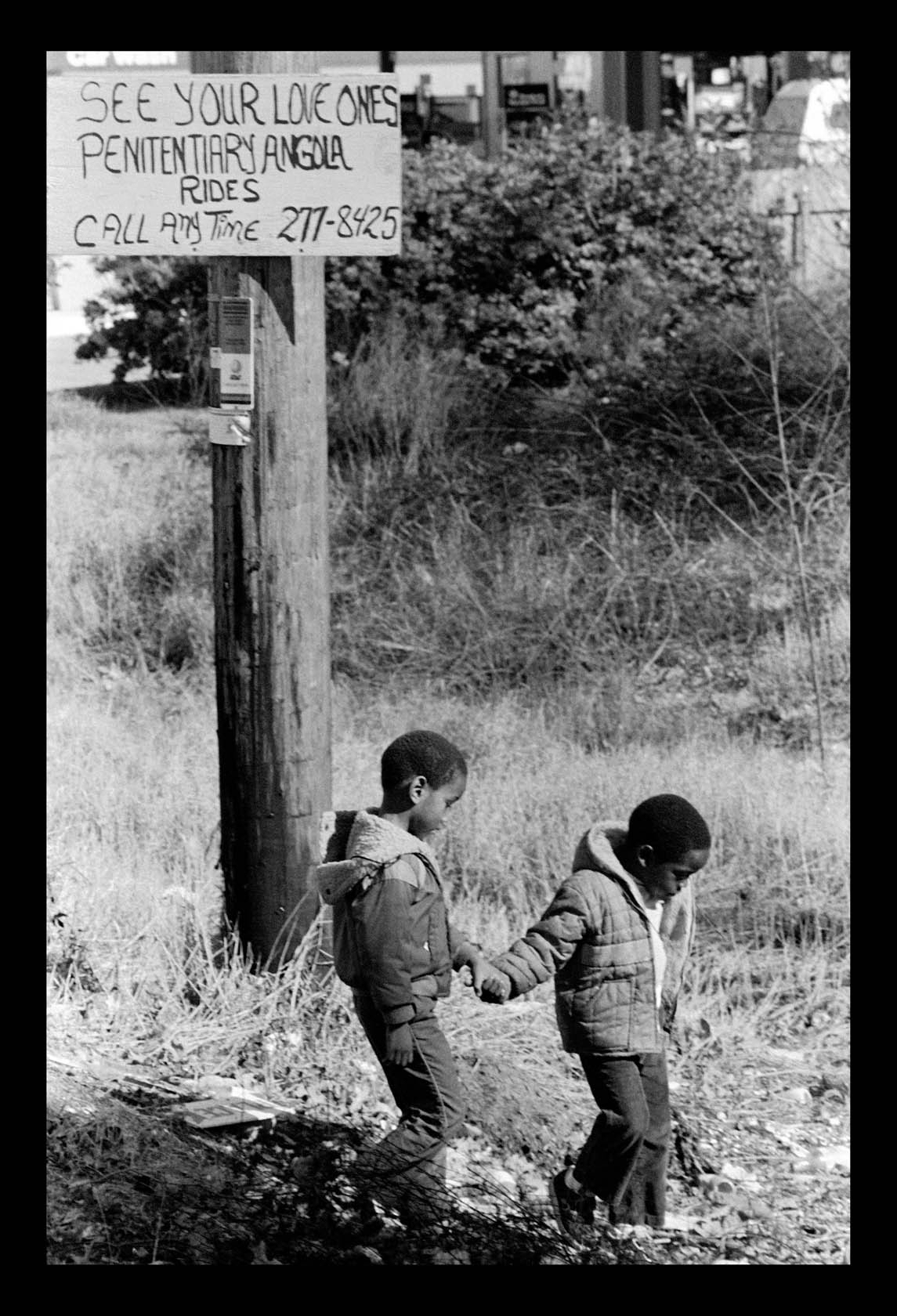 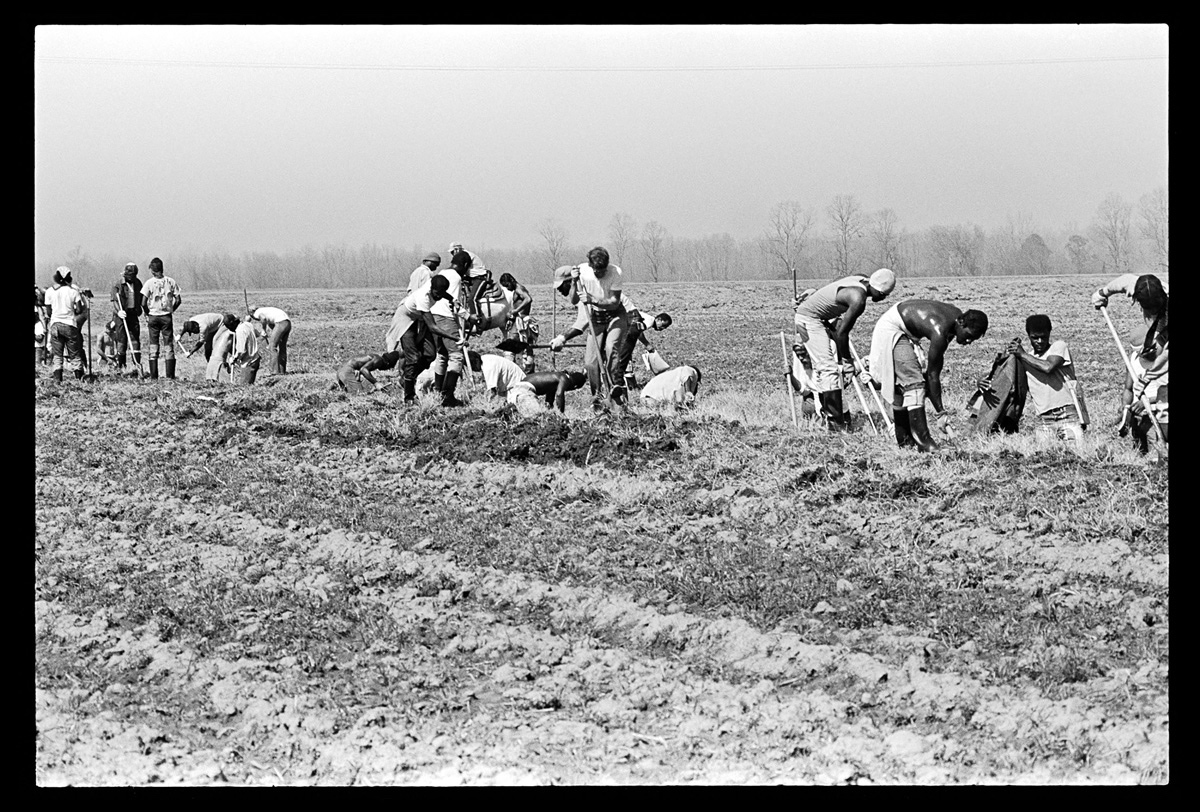 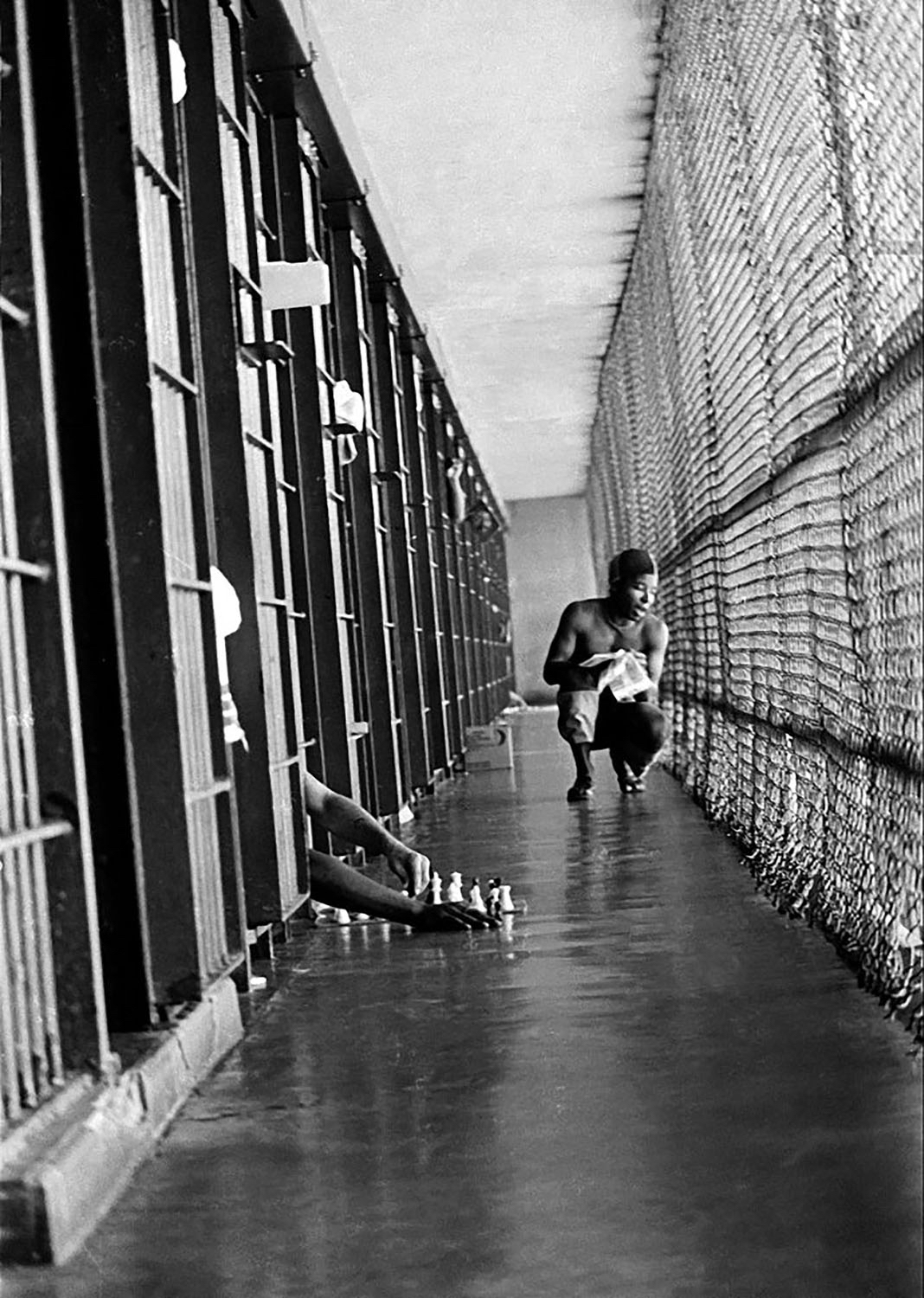 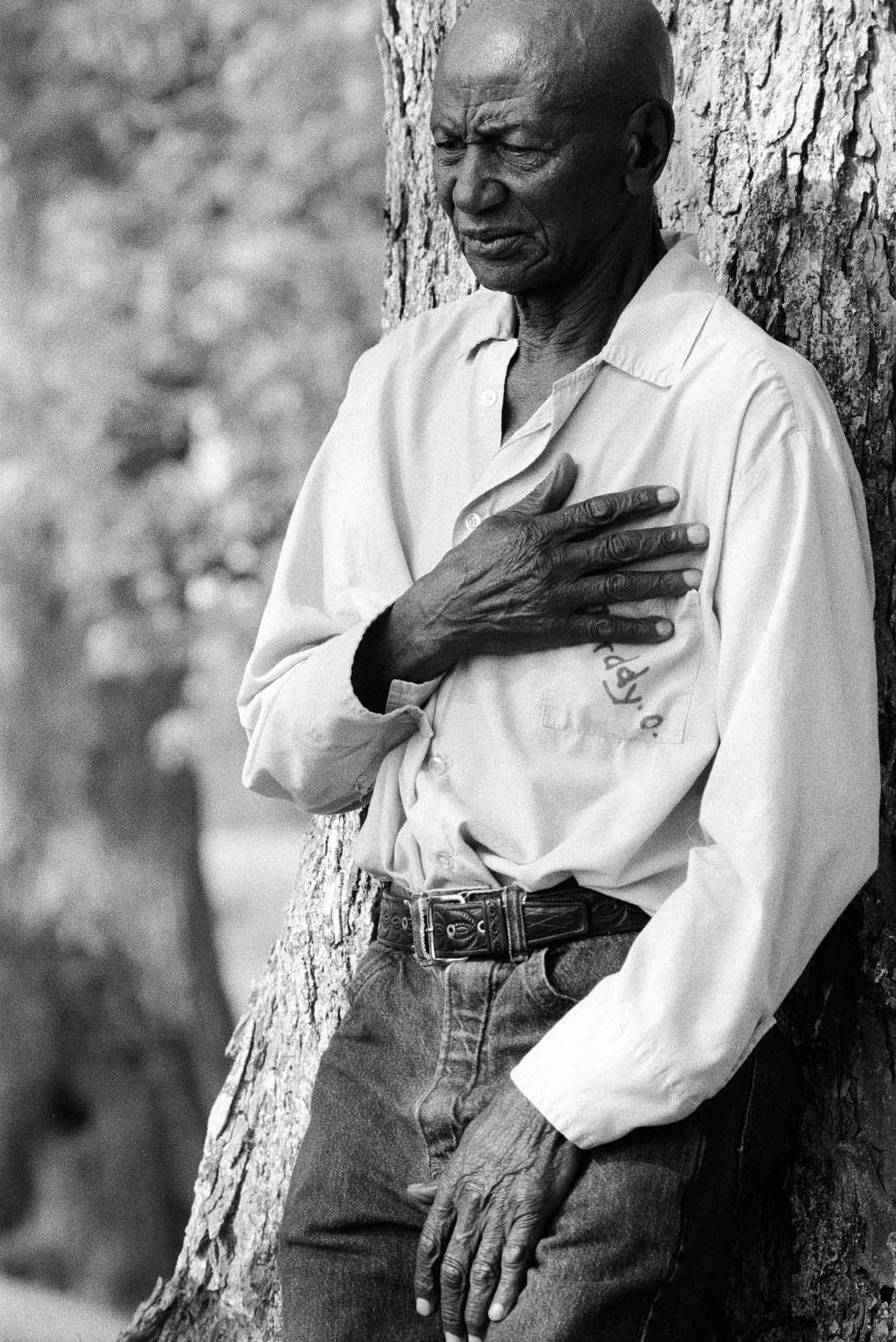 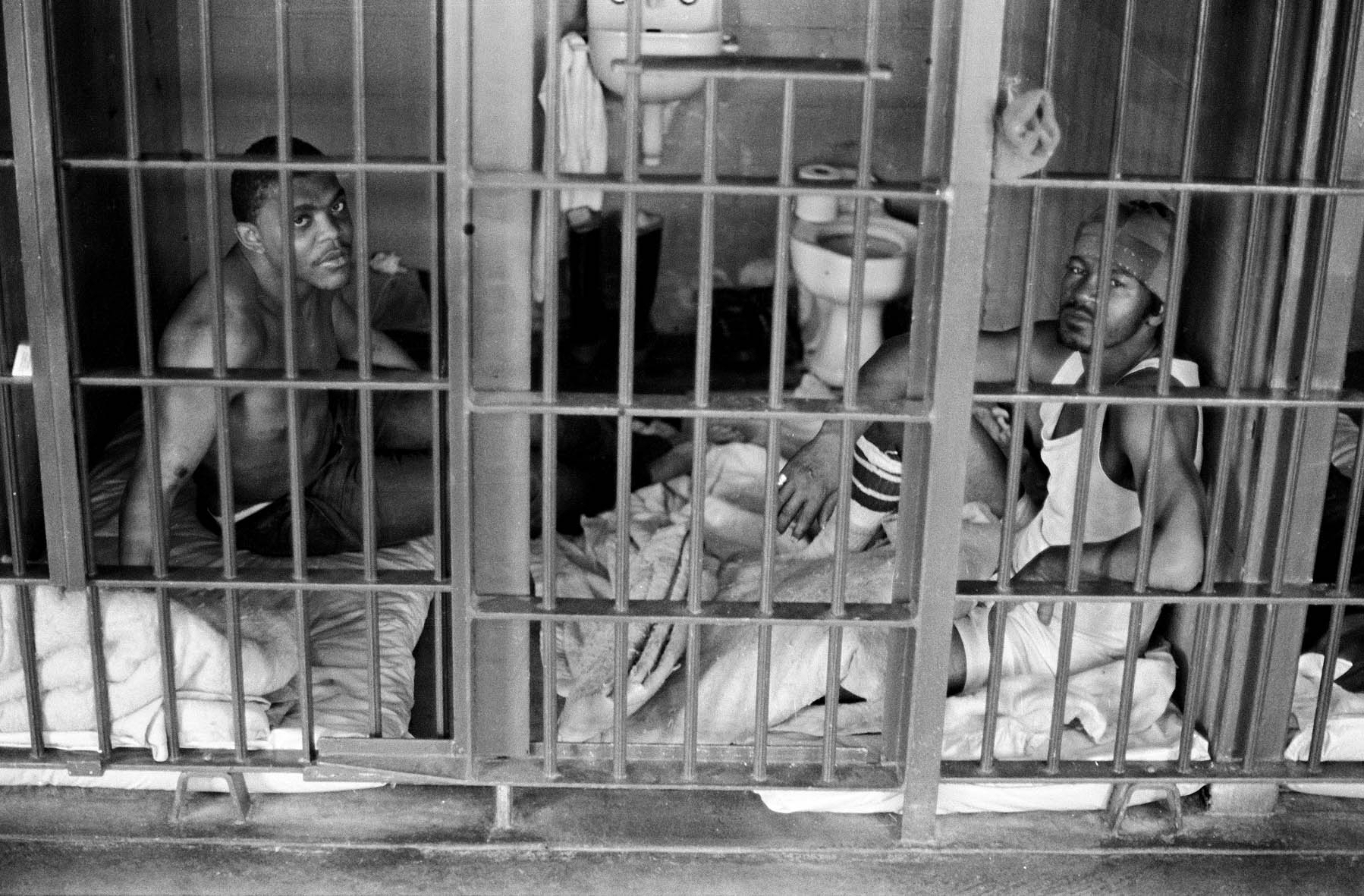 Keith Calhoun. TWO TO A SIX-BY-EIGHT-FOOT CELL AT ANGOLA PRISON, 1980.

Slavery, the Prison Industrial Complex is running at The Frist Art Museum until May 28, 2018.

Linkedin
RELATED ARTICLES
OTHER ARTICLES
Writers Matt Foot and Morag Livingstone explore how four decades of collusion between the government and the police have slowly eroded our right to protest.
In the last of our dispatches from OFFF Barcelona, Rufus Deuchler and Vincent Gault discuss the future of creative process.
A group of Ukrainians living in Poland are helping Ukraine withstand Russia’s brutal invasion by buying supplies and shipping them directly to the war’s frontlines.
In the latest OFFF Dispatch, the enigmatic designer dives into his process, connecting the dots between his unique and varied creative output.
The revered showbiz chronicler recalls his journalistic beginnings, documenting subcultural scraps in the ’80s.
While protests over abortion rights rage in the US, access to abortion services is still almost nonexistent in parts of the UK.