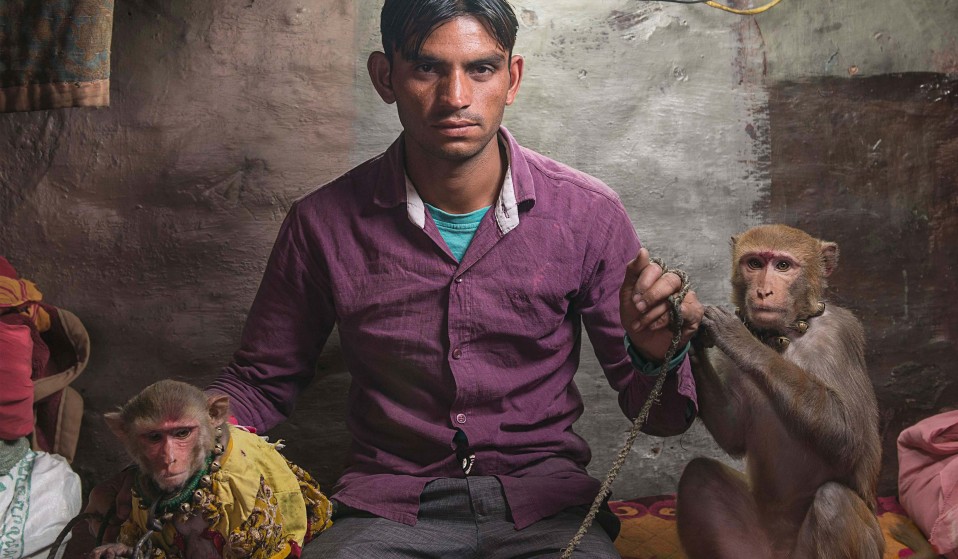 Photographer Mark Leaver discovers a community of street performers in Delhi whose traditional way of life is under threat from India’s rapid modernisation.

Photographer Mark Leaver discovers a community of street performers in Delhi whose traditional way of life is under threat from India’s rapid modernisation.

When Krishan picked up a two-foot sword, he told photographer Mark Leaver he only had one chance to get the shot before plunging the blade down his throat. Elsewhere this scene might have raised eyebrows, but not in Kathputli: the Delhi slum that is home to the city’s acrobats, dancers, magicians, snake charmers and performers of all stripes. The Kathputli Colony, which takes its name from the traditional string puppets of Rajasthan, is comprised of 3,000 homes and is believed to be the largest community of street performers anywhere in the world. 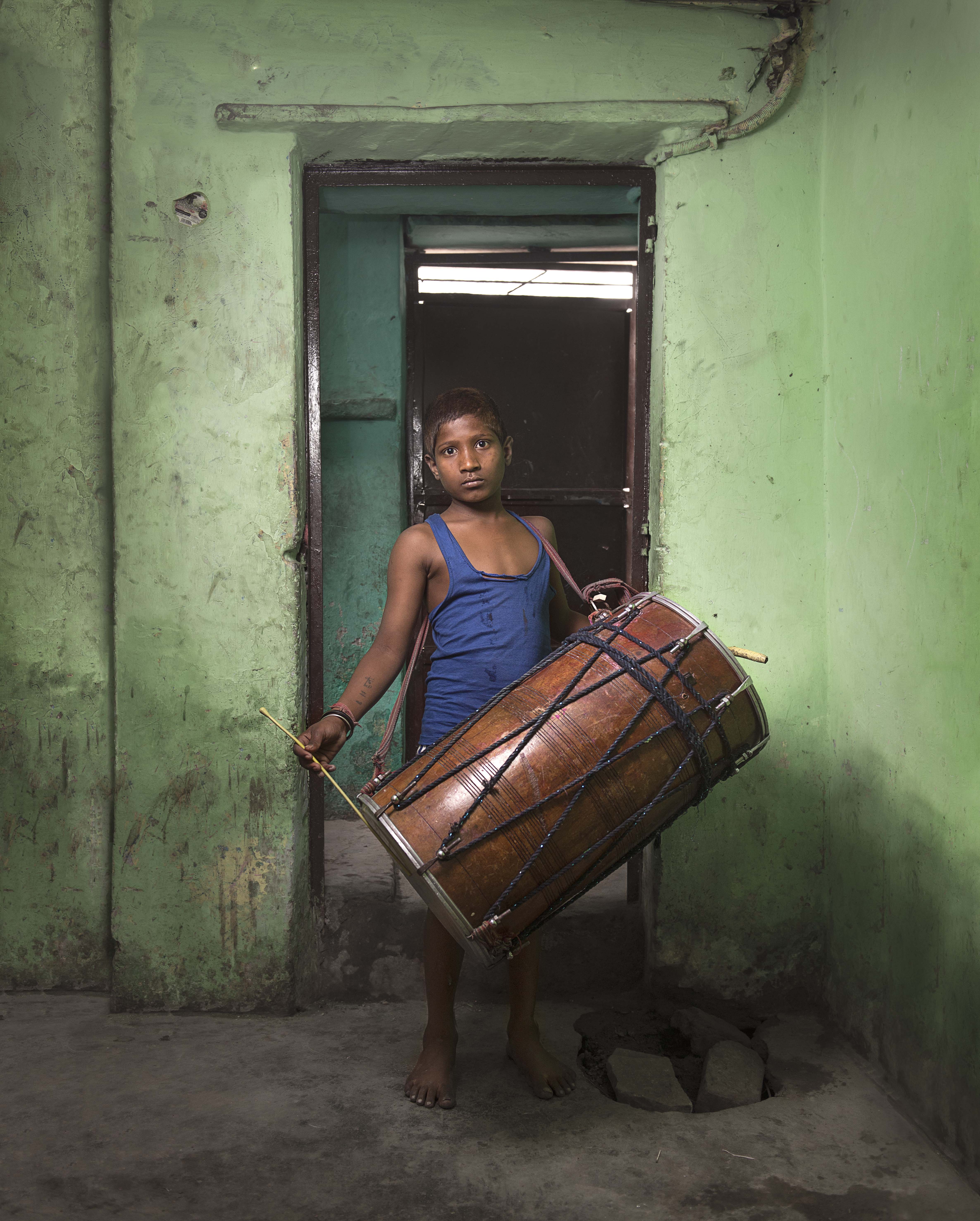 British portrait photographer Mark Leaver has an eye for bringing hidden communities and overlooked subcultures to light in a respectful way, as he did with his acclaimed facial tattoos series. So, when he read about Kathputli he knew he had to explore the place. Volunteering with an Indian NGO helped him gain access to the slum and charity workers introduced him to some of the performers. Inside, he discovered a remarkable community of artists whose traditional way of life is under threat from a rapidly modernising India and property developers who want to turn the lucrative real estate into a shopping centre and luxury flats. 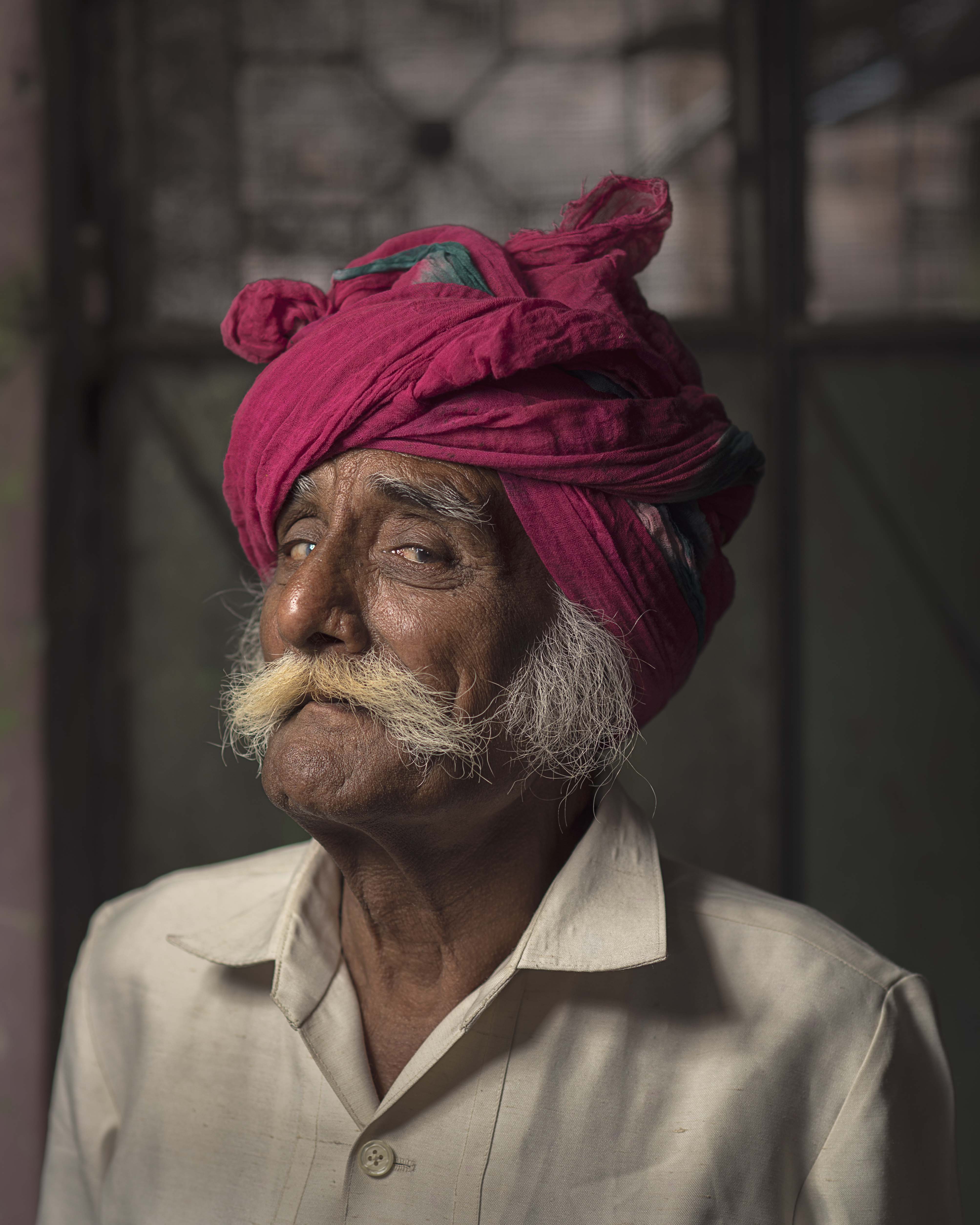 How did you first hear about Kathputli?
I found out about Kathputli through volunteering with an Indian NGO called PETE (Providing Education to Everyone). I knew that I wanted to take portraits in India, but initially I had no way in to any communities or subcultures. Just turning up with your camera to take pictures is quite selfish and will only get you so far when you want to make an in-depth project. So I found the PETE charity in advance and volunteered with them during my stay. I did basic things like teaching English in the slum and helping out with some computer admin for the charity. In return, I managed to get insider knowledge on the area from the locals.

The Kathputli Colony is a slum in New Delhi which is said to have the world’s highest concentration of street performers, including: magicians, snake charmers, acrobats, singers, dancers, actors, traditional healers, musicians and puppeteers. The colony started out in the 1950s as a cluster of makeshift tents which housed puppeteers from Rajasthan. These puppeteers gave the slum its name. Over the years, other performers arrived from all corners of India and began to develop the slum into what it is today. The slum was in a prime location so the performers could easily travel to central Delhi on a daily basis to create an income. However, Delhi has expanded so rapidly that the slum is now right in the heart of New Delhi and within walking distance of the metro lines and 15 minutes away from the business district. This makes the land much sought after. 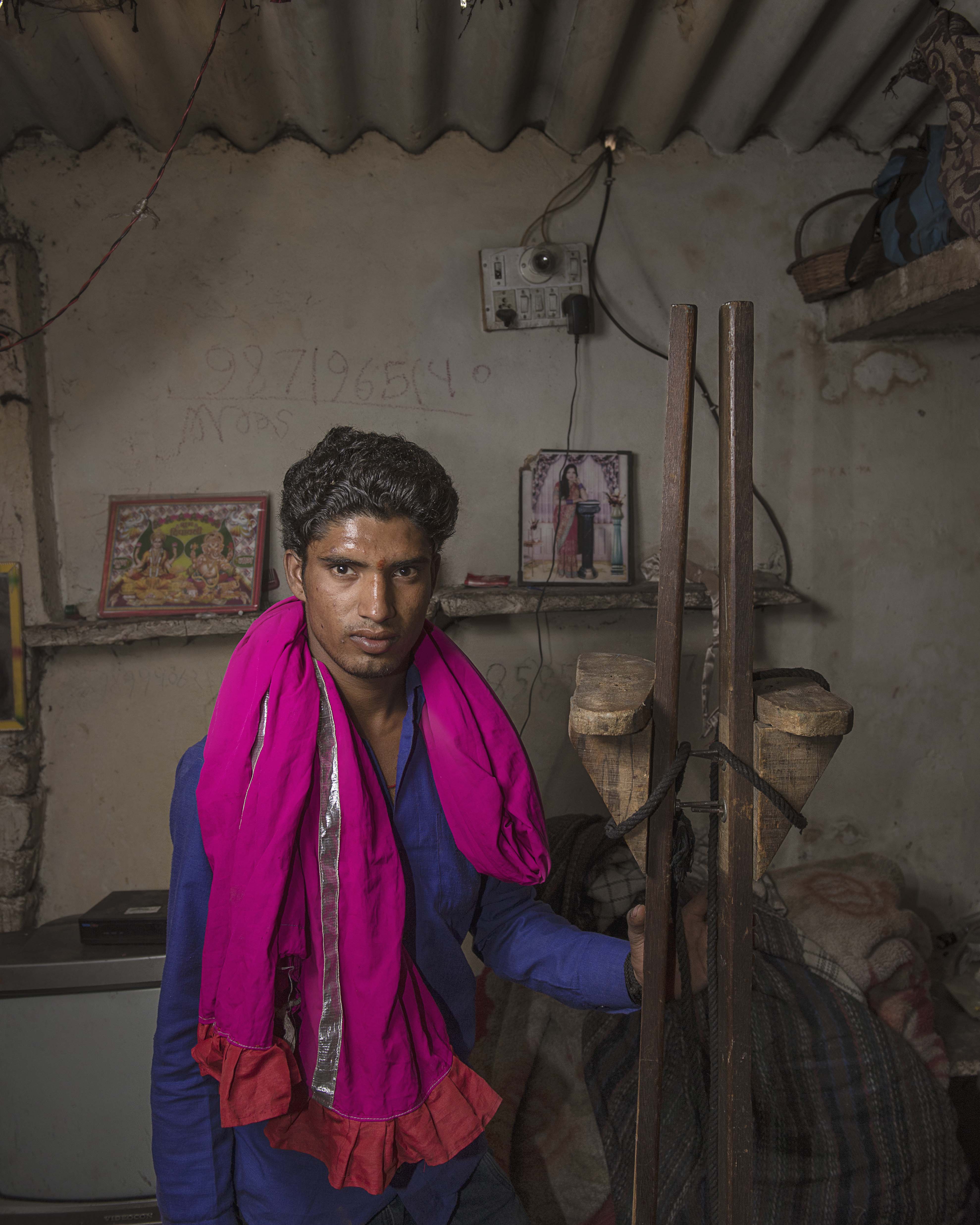 Why did you chose to do a project there?
I knew that I wanted to make work abroad, it felt like a natural progression after traveling all over the UK for my ongoing work on facial tattoos. I didn’t start the project straight away when I went to India; I spent a few days to get to know the area and experience the culture. When I was in an internet café one evening, doing some research online I can across this Guardian article, published on the day I flew to India! I made a decision there and then to do focus my project on the performers of the Kathputli Colony and their impending relocation. 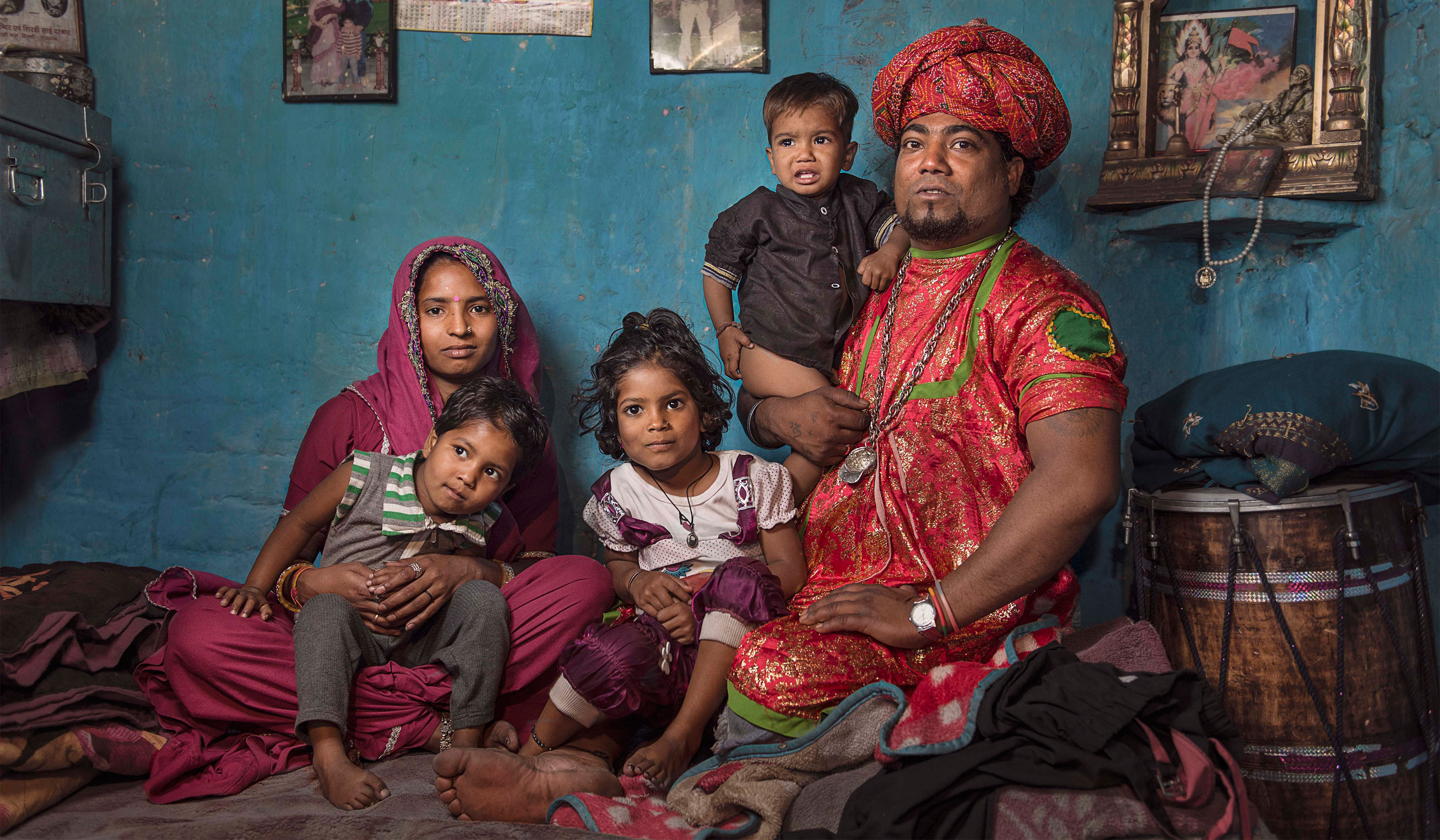 Why do you choose to interview your portrait subjects? What did you learn from the interviewing process that you wouldn’t have discovered otherwise?
To get the kind of photos that I want to make it’s vital that I talk to my subjects. I don’t shoot the traditional narrative based documentary; rather, I create a typographic portrait series. I don’t publish a huge amount of the interviews. They’re designed to give me a greater understanding of both the individual I’m shooting and the overlying subject that I’m exploring.

For me, photography is definitely a learning based activity: the initial interaction allows me to talk and write about my photos in a more sophisticated way. Then post-interview I feel that I and the person I’m with have more of a relationship which allows for a more relaxed portrait sitting, making myself and the sitter feel less rigid.

For the Kathputli project I had the luxury of translators John Signgh and Laxmi Balotia, who both work for the PETE foundation, helping me out in return for services to the charity. On reflection I wouldn’t have made the images that I did or meet the people who made the project if it wasn’t for John and Laxmi. 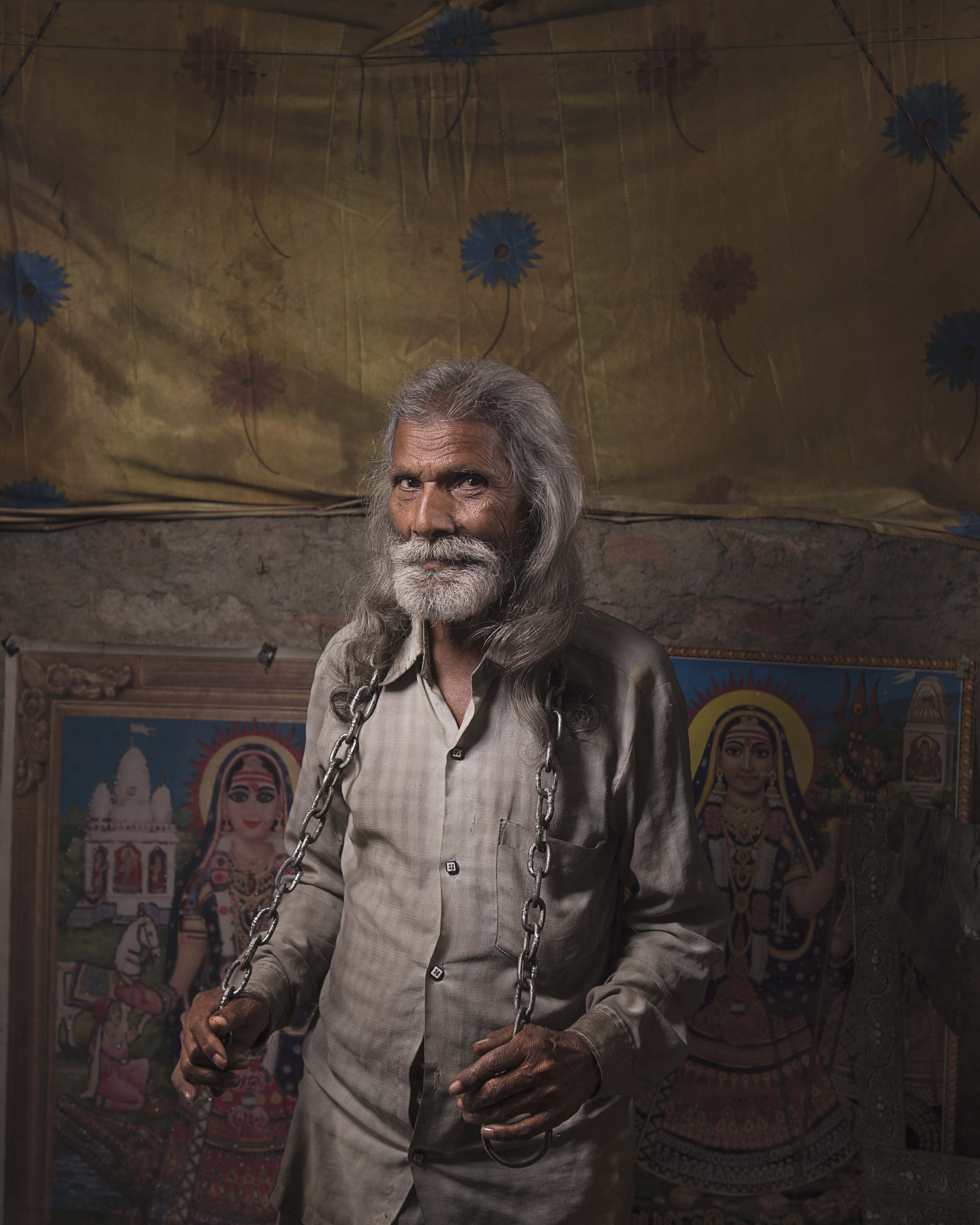 Were there any stories that stood out for you?
That would have to be Krishan (pictured above). He was an incredible juggler and the only person in the slum who was able to do sword swallowing. When I met him he instantly apologised for his appearance (he was wearing a tattered pink shirt), I hadn’t even noticed this, nor did I care. However it meant a great deal to Krishan. The residents of Kathputli live to perform, so details like costume and appearance mean a lot. I assured him that it didn’t matter to me and reminded him I had come from the UK to see Indian street performance. 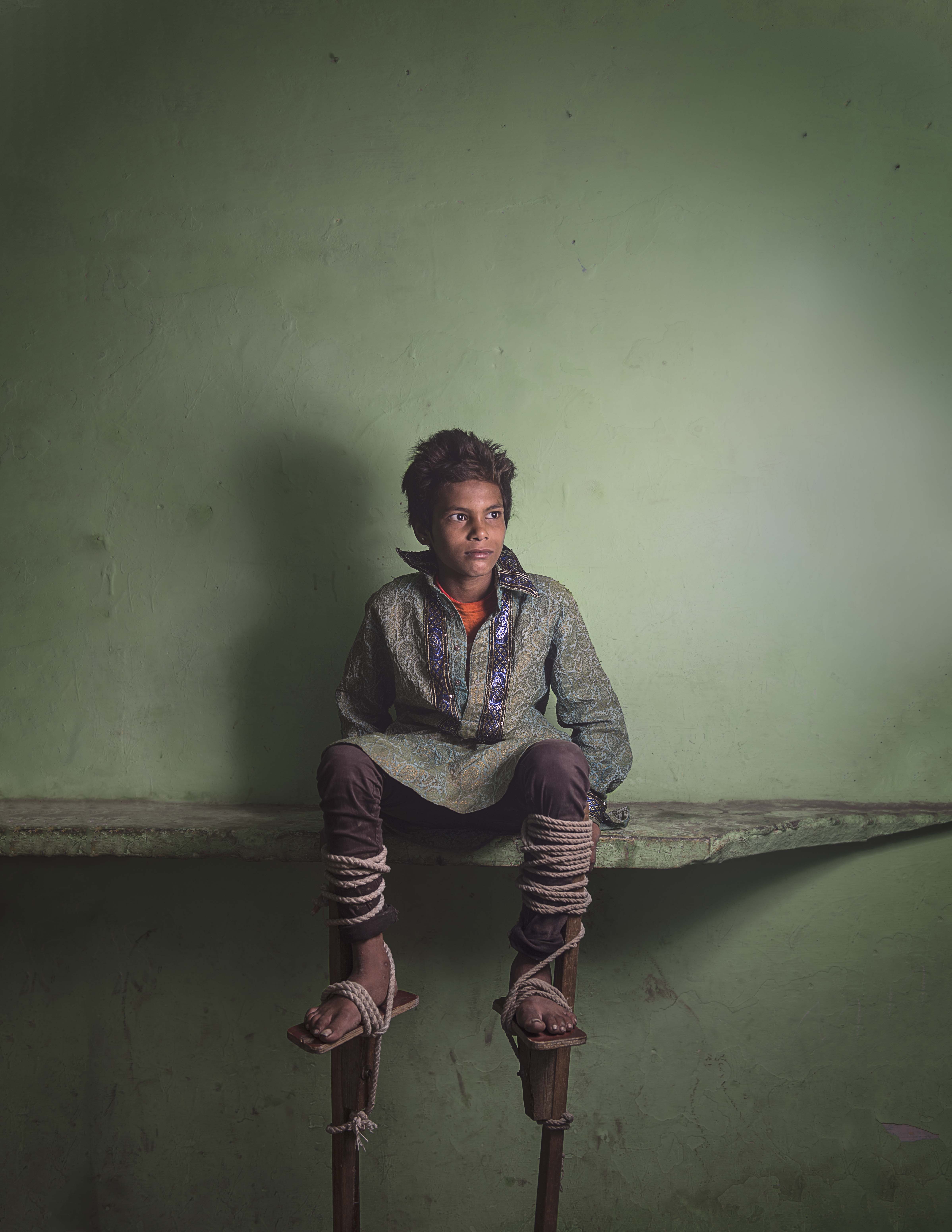 He smiled and began to show off his juggling. After a flawless five minute juggling performance he told me to get my camera ready as he’d only be doing this once. He was about to swallow a two-foot sword. He mentally prepared himself and warmed up the small crowd by slapping the sword on the dirty ground. Then without any hesitation he shoved the sword half way down his neck. He paused, then with a huge gagging noise he pushed the rest of the sword down his throat so you could only see the handle. He held it down for a few seconds then with a look of relief on his face pulled the whole thing out in one. The performance was amazing and everybody cheered while Krishan furiously drank water.

Later, when most people had moved on, I took a few portraits with Krishan. You could still see where his eyes had been watering after pushing the dirty two foot long piece of metal down his throat. This was one of my favourite portraits I took in India and one of the three I chose to exhibit in London for my graduation show. After the portrait I stayed to chat with Krishan and got us some food as a thank you. He began to tell me about his situation at home. His daughter had cancer, and they couldn’t afford the necessary medical care. I’ll always remember when he looked up at me and said that people from the slum don’t walk out of the hospital if they’re diagnosed with cancer. 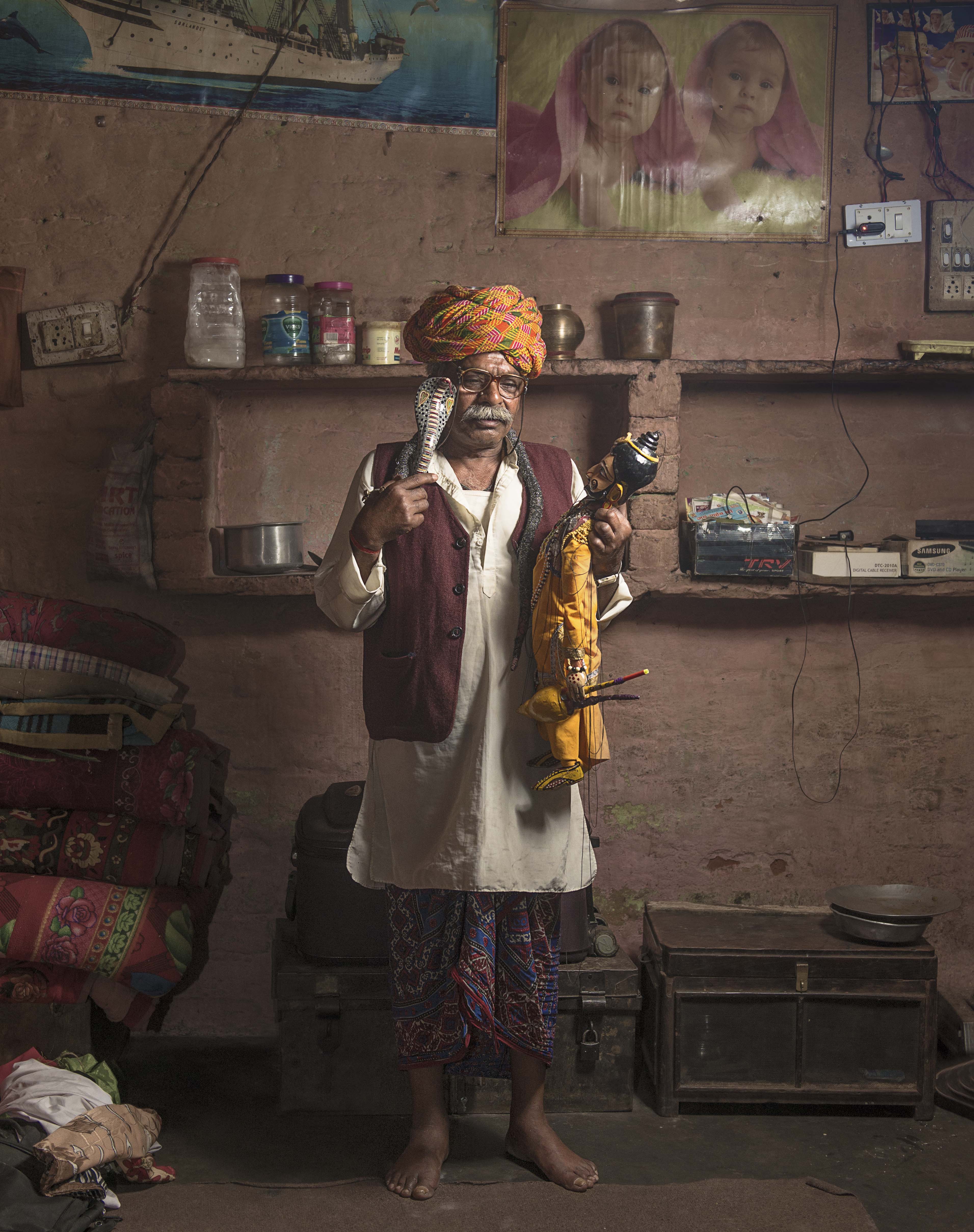 Does the community still have a place in a rapidly changing India? Is their way of life under threat?
Traditional India has been well documented by the likes of established photographers such as Steve McCurry. I was curious to go to one of the slums and see if the old values and ways of life still existed. I found a strong sense of tradition and values in the Kathputli Colony, particularly among the older generations. The younger generations held true to their family ways but you could tell that they had a few Western influences playing on them. You could see this in the way some of them dressed or the fact that others occasionally left the slum to use Facebook at internet cafes.

The threat to their traditional way of life is unfortunately a major issue. As I mentioned, the land the slum is built upon has now become very valuable with Delhi’s expansion and India’s steady westernisation. The land has been brought by real estate developers with the proposal to build luxury flats on the land, this plan will leave the residents of Kathputli homeless. This plan is still under development and being resiliently fought by Kathputli. 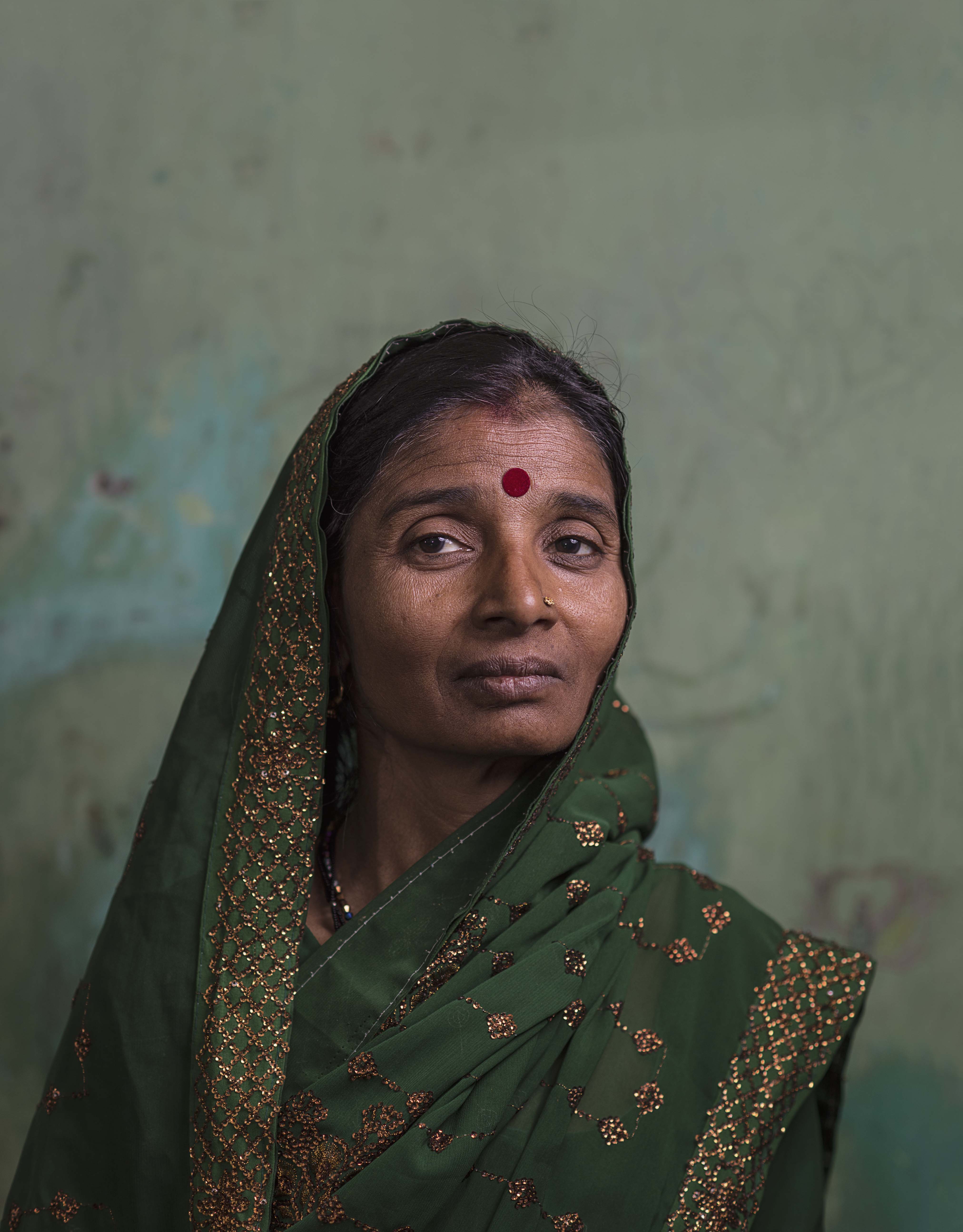 Did you feel any sort of responsibility to the people shot? How did you chose to represent them in the way you have done?
Feeling responsibility or sympathy for the people that you photograph is nothing new and has been widely discussed and looked into, just look into the Kevin Carter case. I felt sympathetic towards a lot of the people that I met (particularly Krishan) and had numerous strangers coming up to me and grabbing me while begging for money. If you gave money to everyone who asked you for it in India, you wouldn’t have any left after a day. I wasn’t in a tourist area and I can count the number of other white I saw people during the month I was there on one hand. This naturally made me stand out at times and is why I often got a lot of attention. As a photographer I’m just a witness, I don’t disturb. All participants have agreed to have a portrait taken: the still and set-up nature of the images that I make are not possible without consent.

The representations in this project I feel are quite unique to the subject, I didn’t photograph poverty or helplessness. But rather focused on the pride of individuals. This series is portraits of performers, something that needs to be understood about this series is that these people have been training in their art since birth. It’s their legacy and what they teach or will teach their children. Some of the performers have travelled the world doing what they do, the slum is simply their home.

Linkedin
RELATED ARTICLES
OTHER ARTICLES
Yesterday, rail workers came together to protest poor pay, working conditions and job cuts in their latest round of strikes.
A new series of photos by Johny Pitts shines a light on communities and subcultures that have all too often been overlooked.
Protestors gathered outside Downing Street following the latest atrocities committed by Israel against Palestinians living in the besieged strip.
Steel City is often overlooked when it comes to the country's cultural radar despite its role in shaping electronic music.
In the latest instalment of Photographers in Conversation, the creator talks portraiture, platforms and taking inspiration from Little Simz.
As the Criminal Bar Association enters its fifth week of action, criminal barrister Russel Fraser explains why the legal professionals have walked out and how action is likely to escalate.