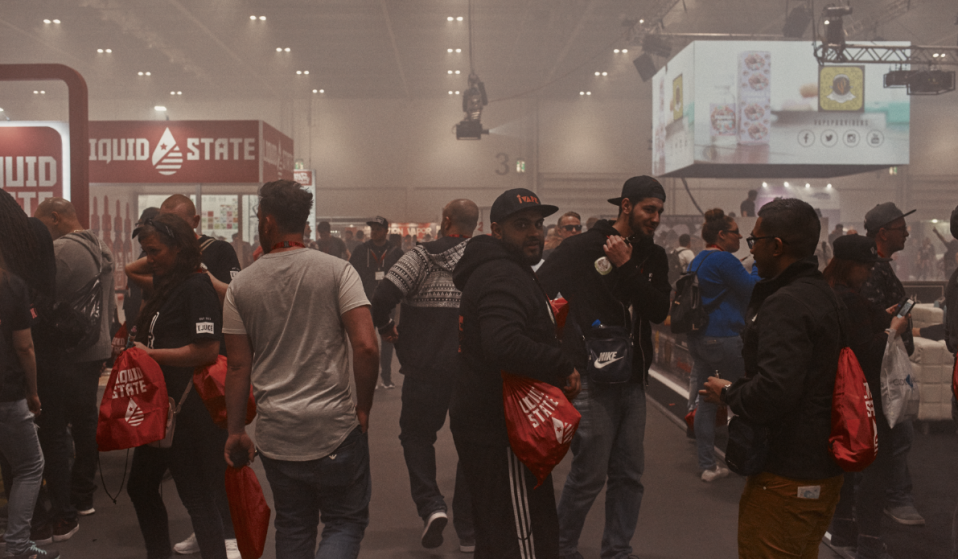 A photographer's fascination with our obsession for vaping.

Photographer Elliott Wilcox is fascinated with our obsession for vaping. When the opportunity came up to sneak into the UK Vape Jam in London with his cousin, he just couldn't resist the chance.

My fascination with vaping started last summer when my cousin, who had recently kicked conventional cigarettes, brought home his first vaping device. He brought this freshly unwrapped tool to our local battle cruiser where we marvelled at the amount of vape (vapour produce by an electronic cigarette or device) this gadget could produce and debated until closing time was this cool or not!? 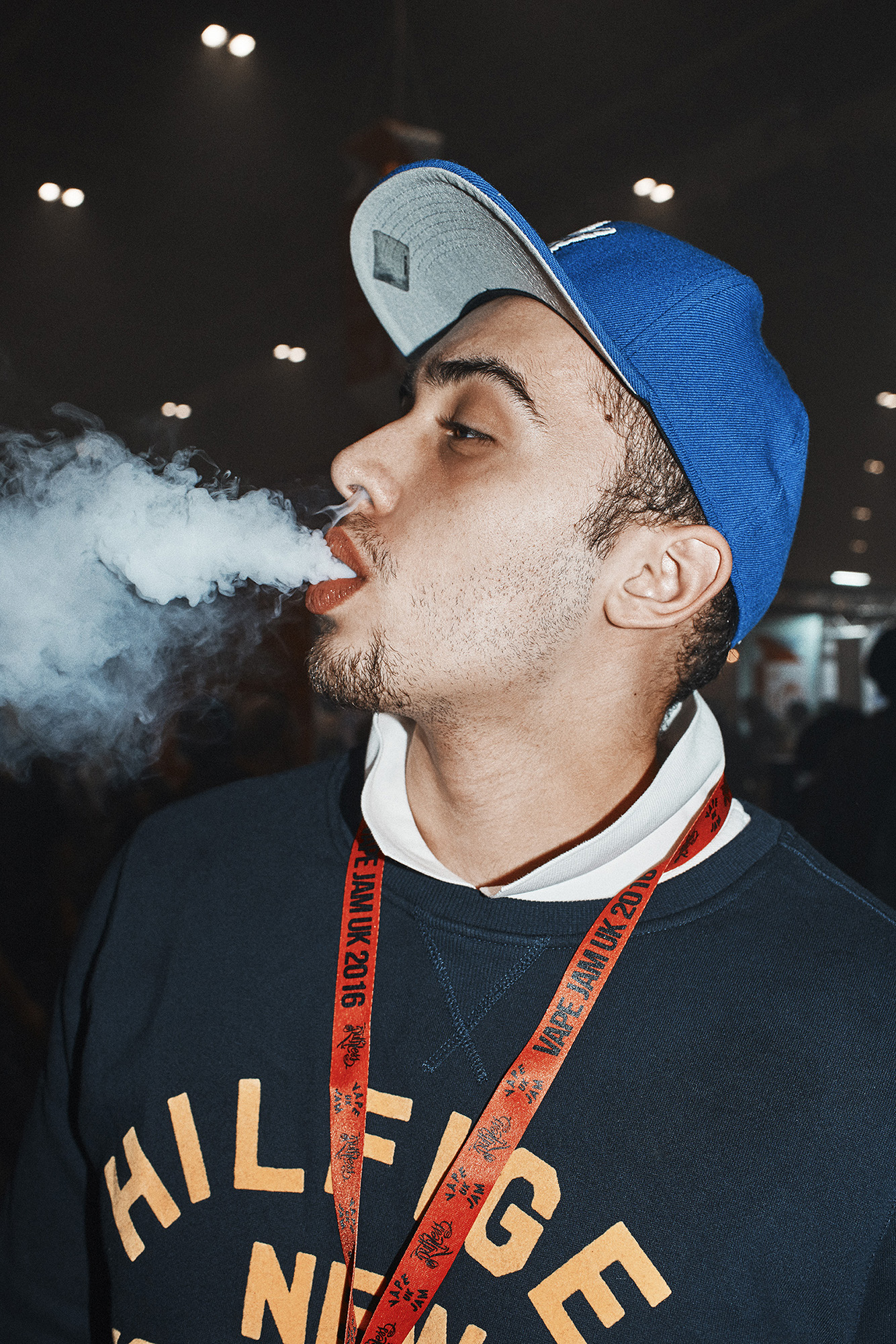 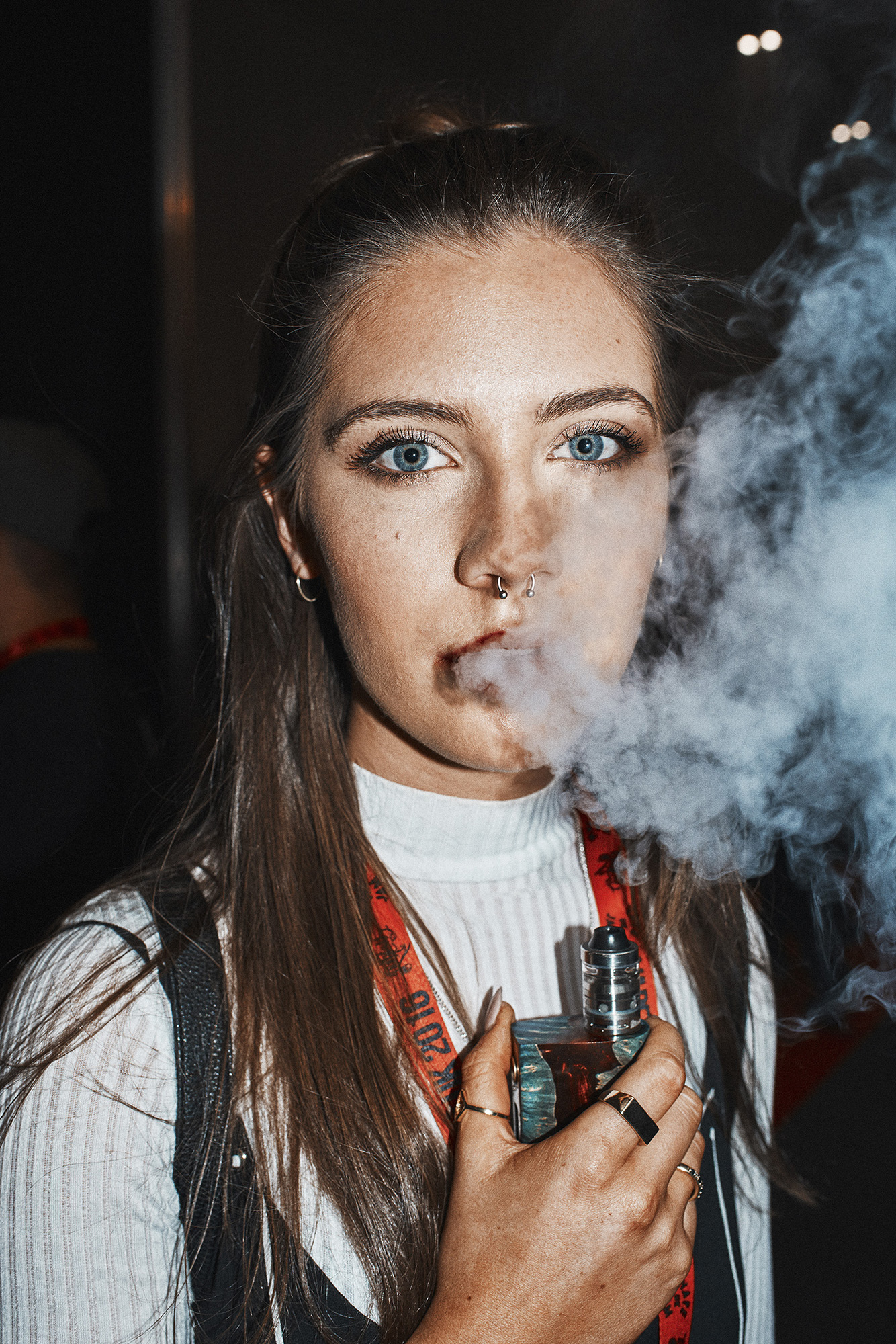 A year later I find myself armed with my camera and vape obsessed cousin at the back of the longest queue I have ever faced at London’s Excel centre for the UK Vape Jam, the UK’s largest vaping convention… and I don’t even vape. I have become weirdly fascinated with this new craze of modern culture and the people who do. Why!? 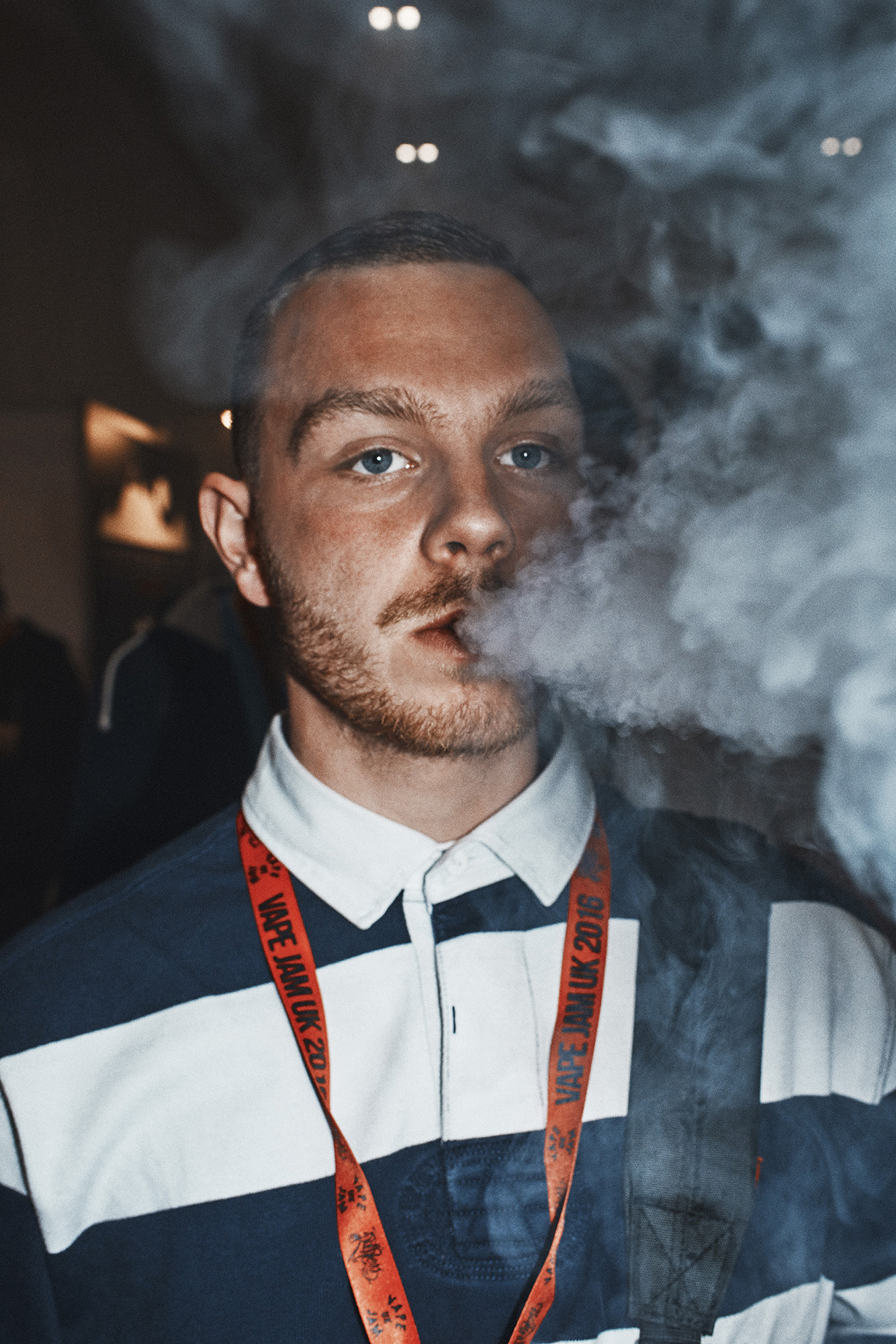 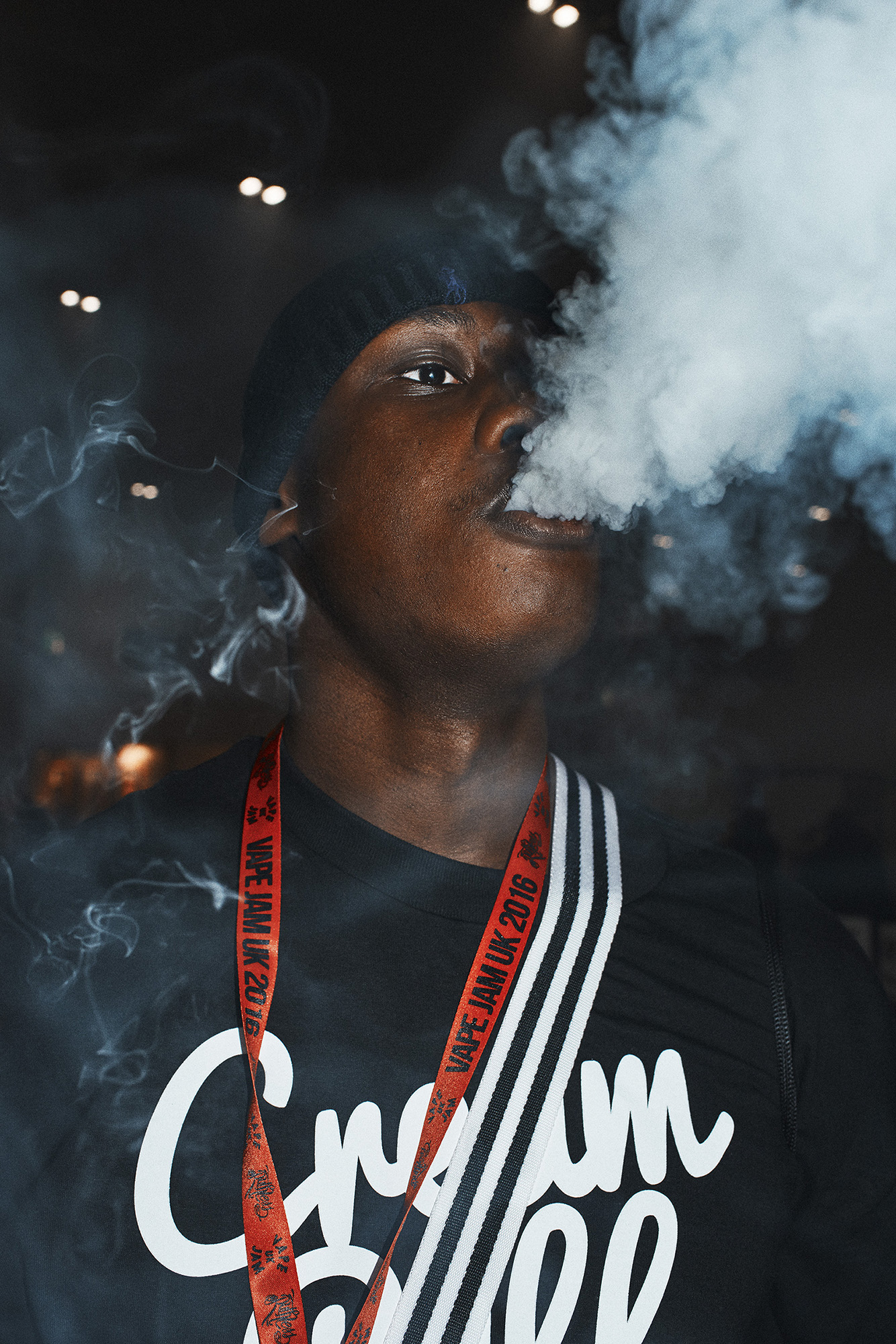 Having not pre-ordered tickets and facing a three hour queue while being whacked in the face from clouds of sweet smelling vape, I successfully attempt to blag my way in under the guise of being part of the press, I had a camera round my neck and said I had to leave soon. 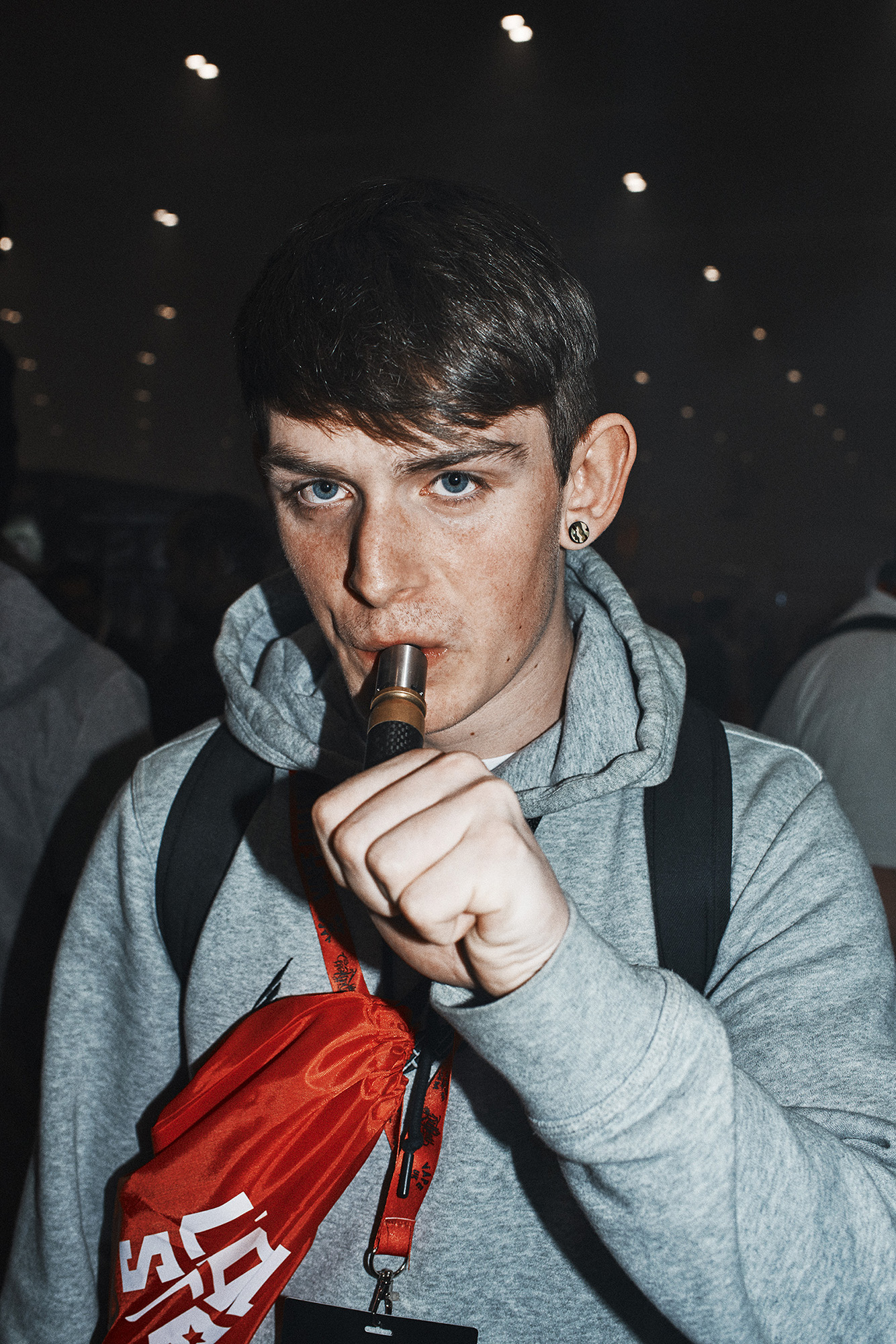 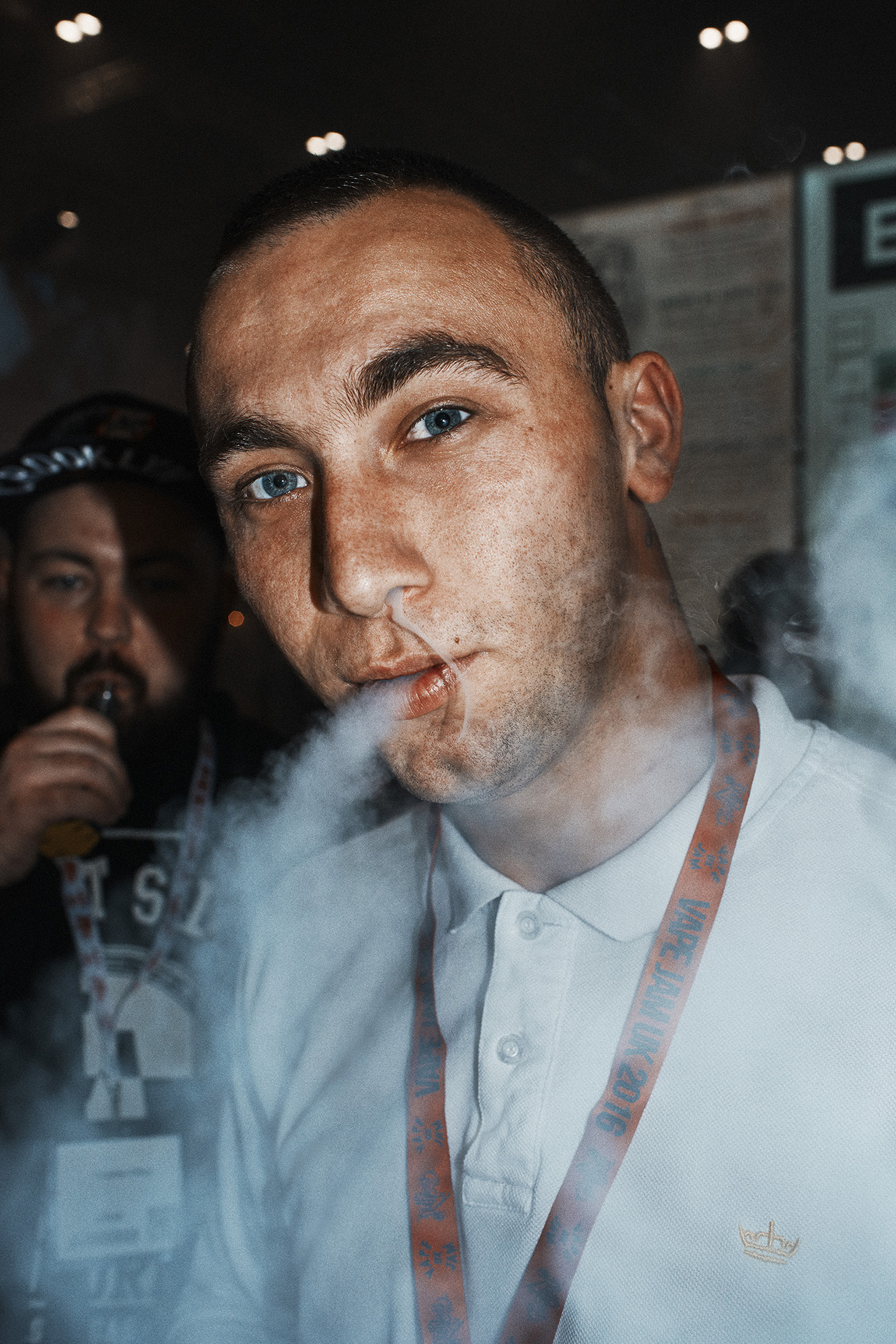 I am in – to set the scene the Excel centre looks like it could be on fire and I have left the one thousand long lined queue to be met by another two thousand mingling vaping vapers inside. We are engulfed by an over hanging cloud.
I am not sure why but it feels illegal. 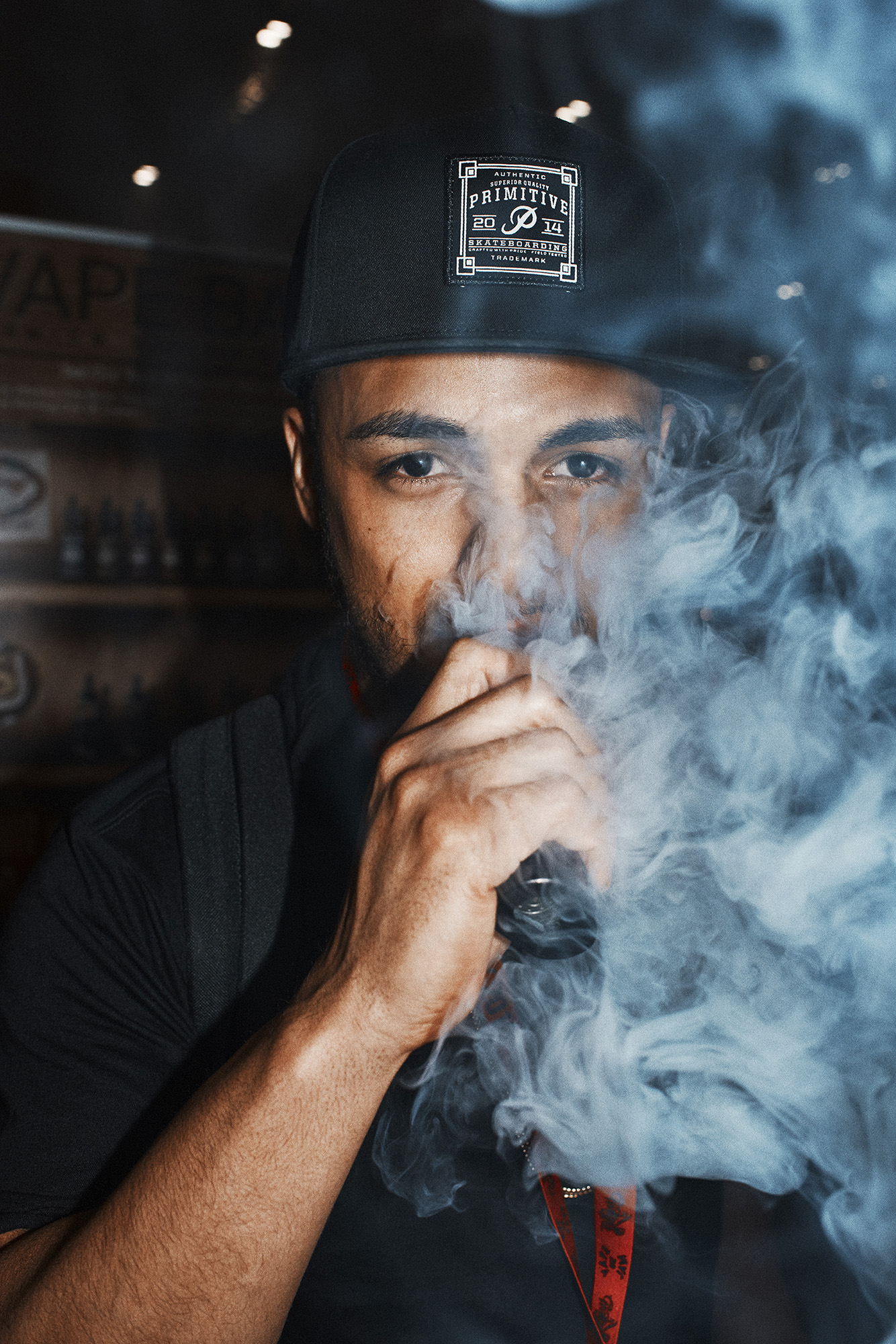 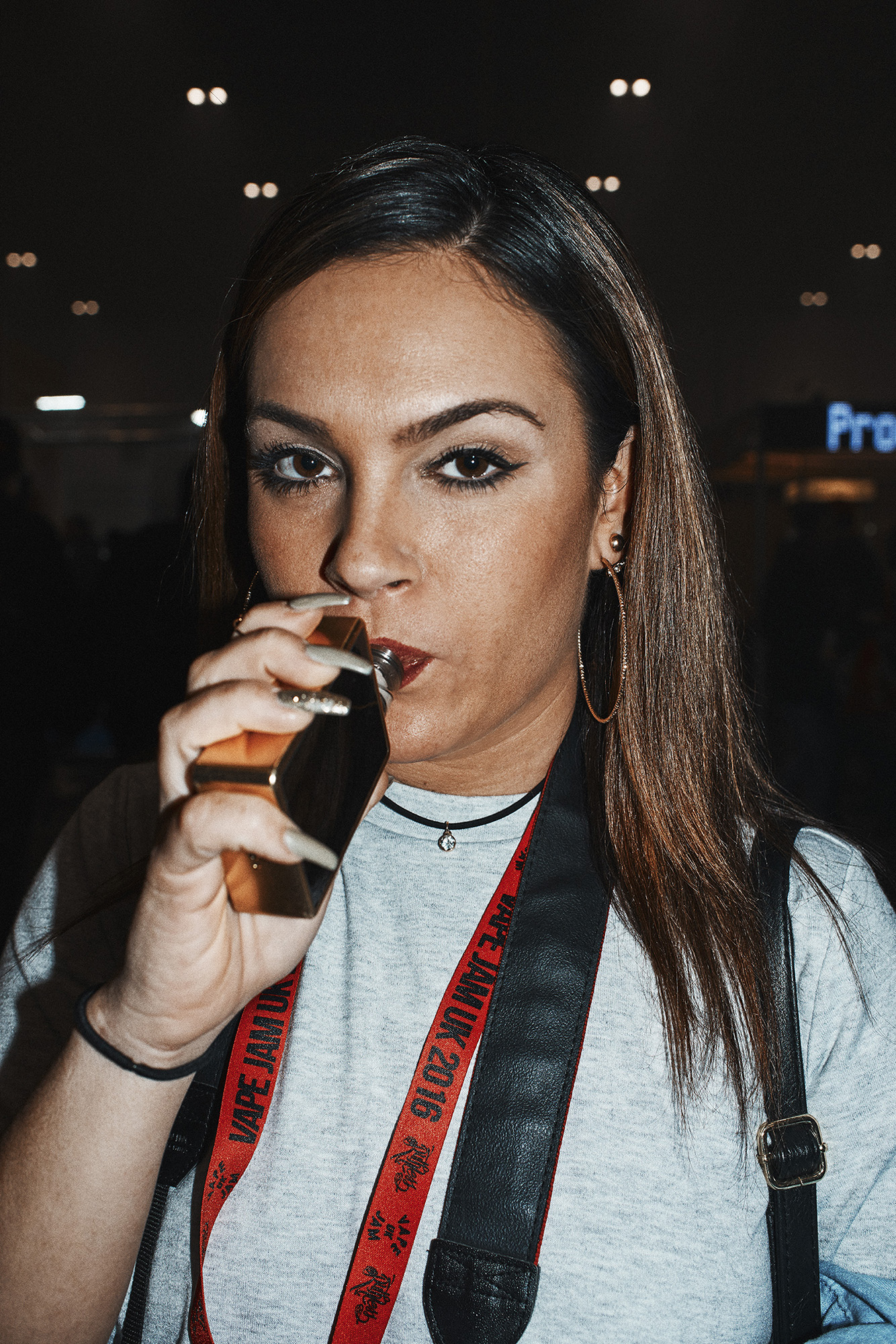 Vaping is a compelling mix of rebellion, technology and social acceptance all rolled into one. In one sense, people are vaping for the same reasons teens have started smoking cigarettes since before any of us were born… the illusion of being cool, a distraction from insecurities and boredom, or perhaps a superficial vehicle to socialise with others. 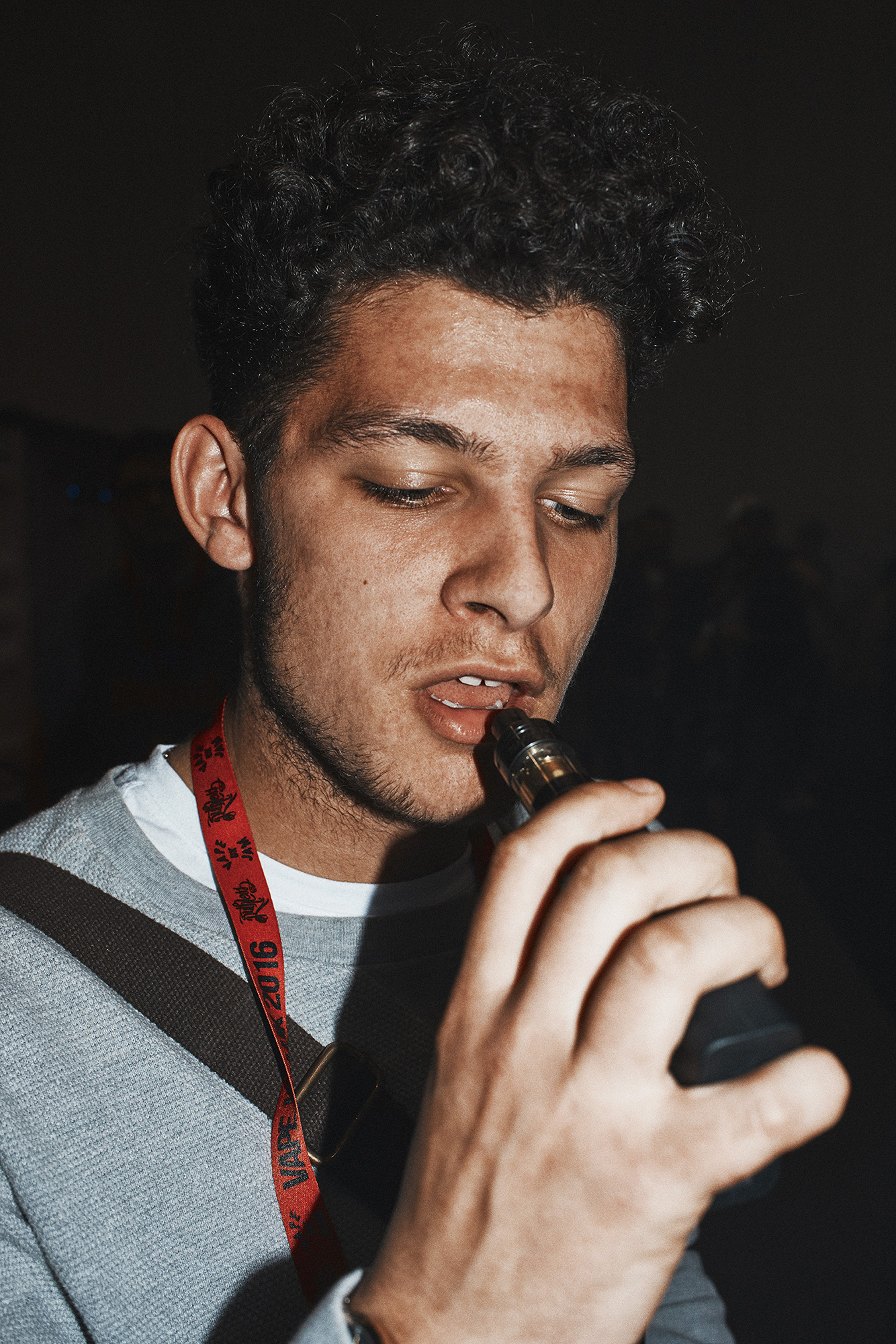 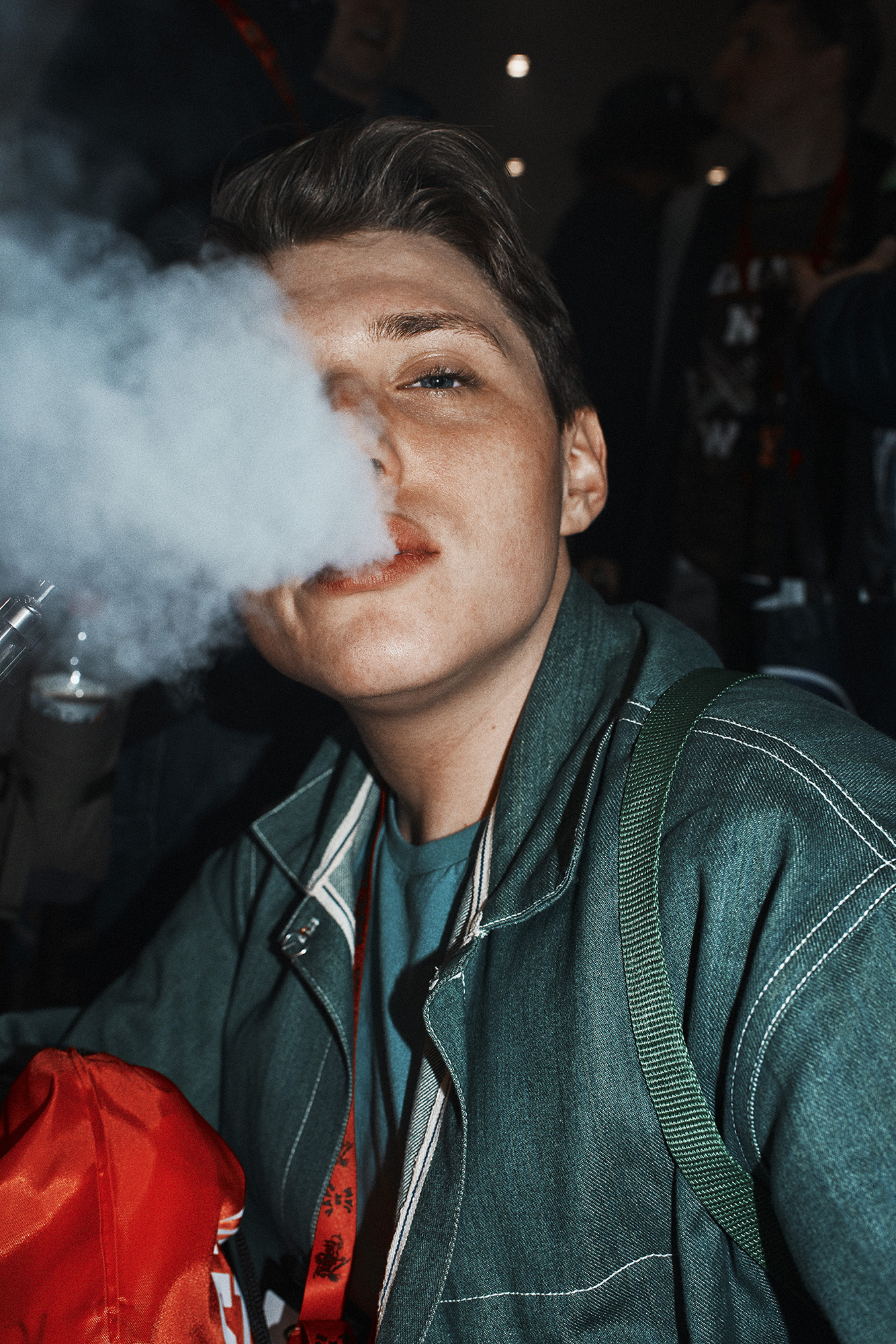 However, there are more then just teens trying to be cool here, the majority were fully grown adults, who I can only assume are part of the large majority of vapers who consider themselves to have quit smoking. Have they? Medically it’s healthier but the obsession is still there. 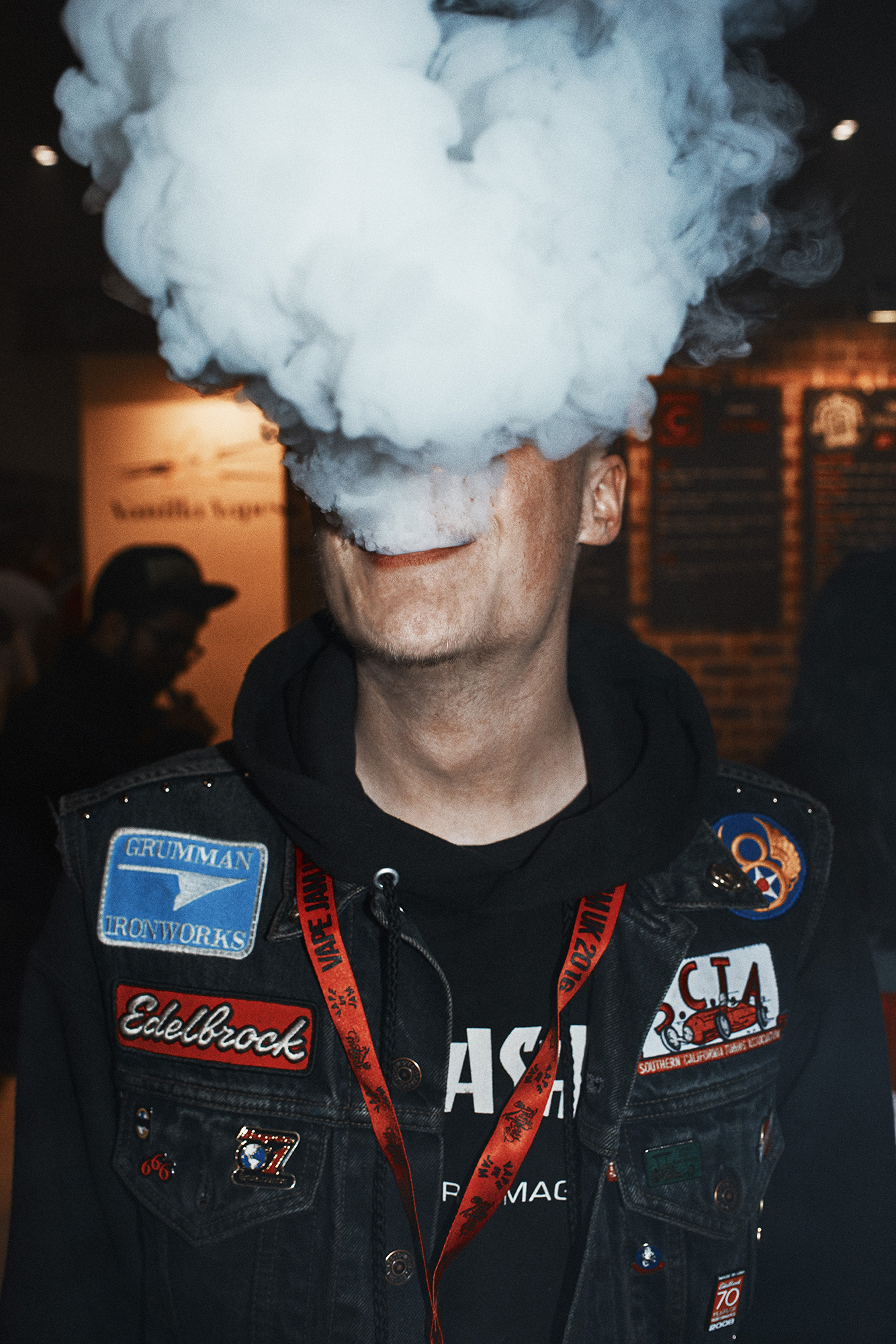 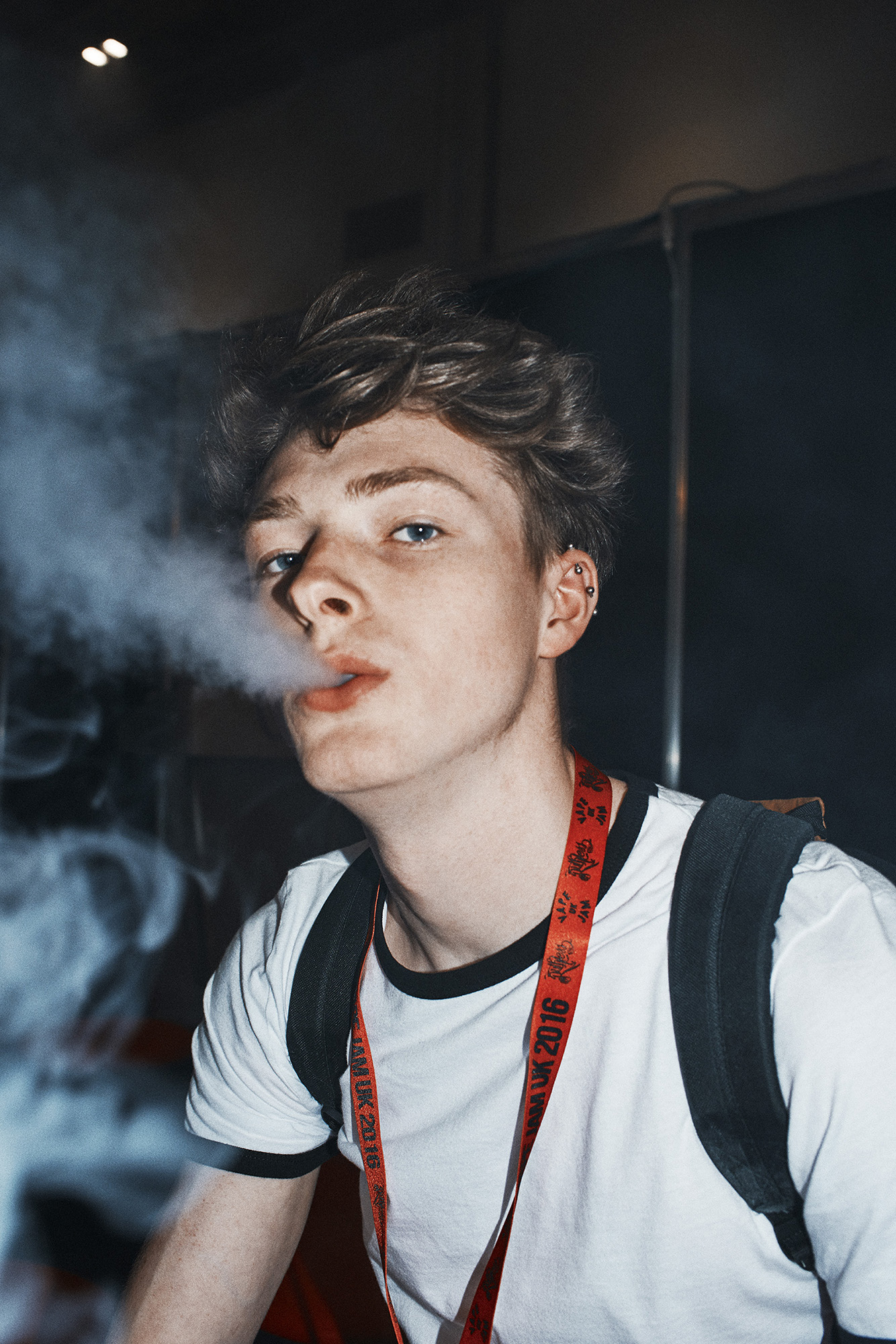 These photographs are an insight into the vaping world and my attraction to the people not afraid to vape. 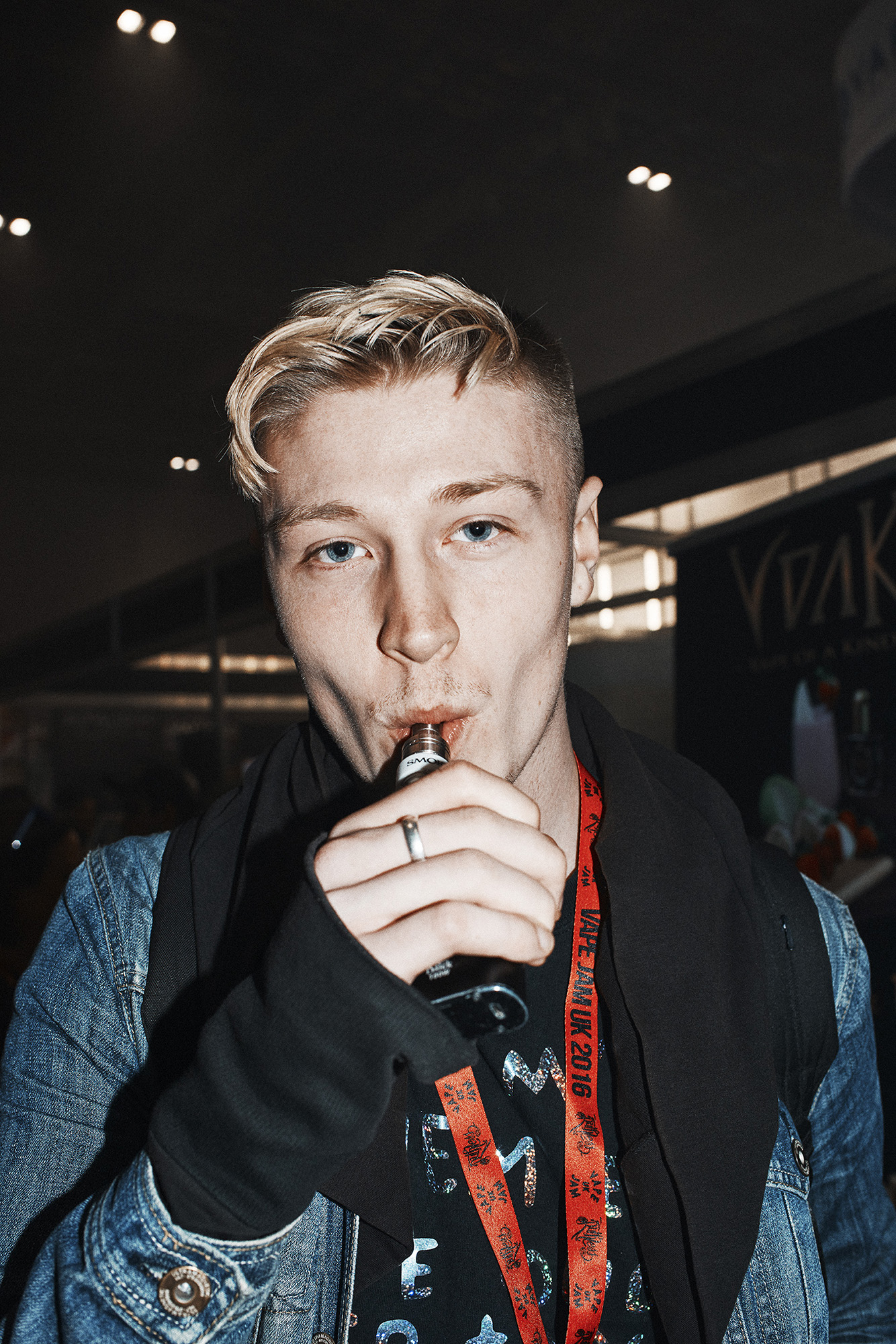 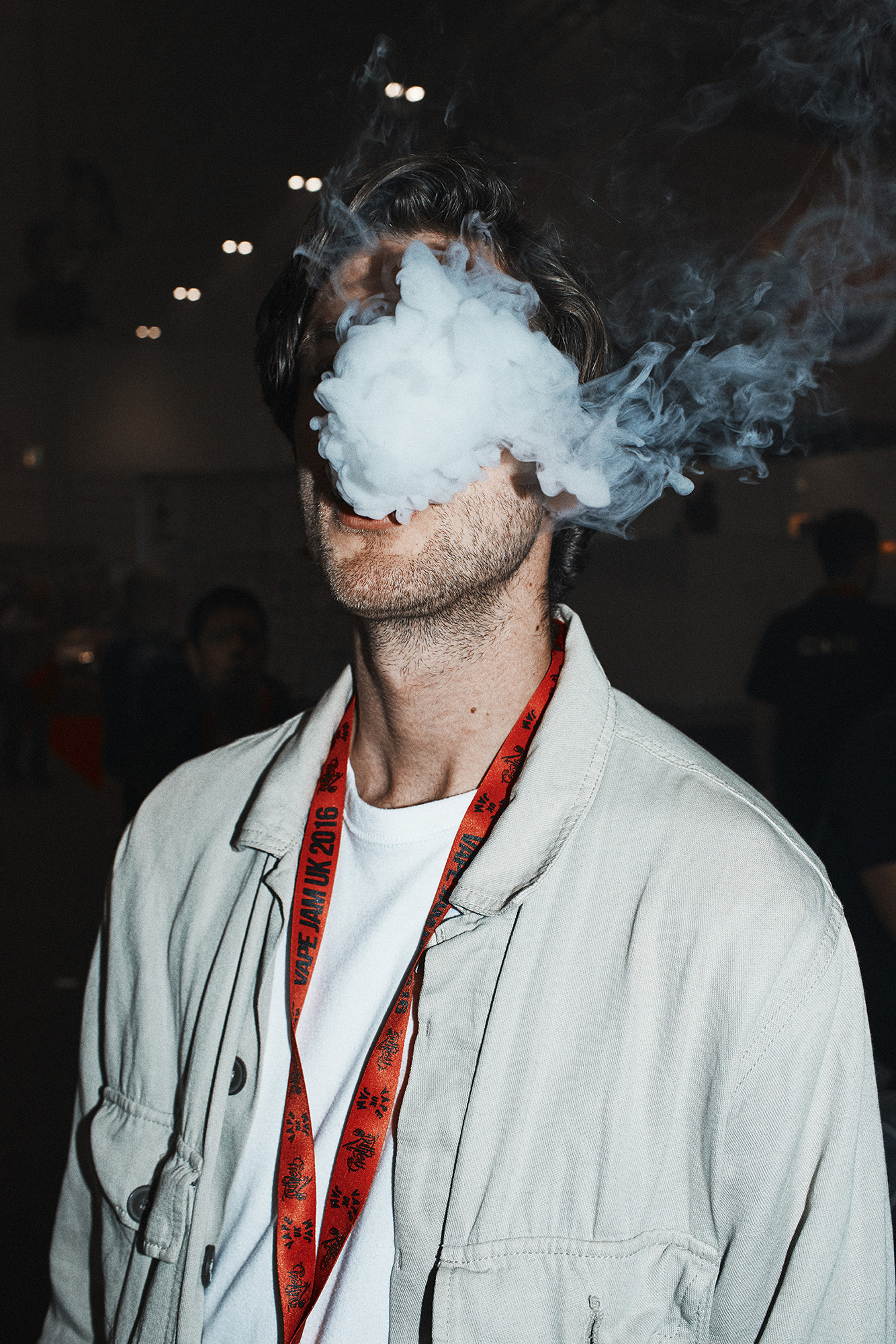 Linkedin
RELATED ARTICLES
OTHER ARTICLES
The idea that a younger generation is abandoning work has become a popular narrative online, but it doesn’t necessarily reflect reality.
As the Scottish government announces a rent freeze, an activist with Living Rent who fought and won shares how they did it, and what must come next.
Rogue landlords are exploiting young and inexperienced renters and leaving them in mental and financial turmoil, reports Niall Hignett.
Ahead of the release of their first collaborative album, the producer and rapper talk psychedelics and the state of UK hip hop.
Following the announcement of an 80% hike in the energy price cap from 1st October, crowds gathered outside the offices of energy regulator Ofgem to protest and declare their intention to undertake a payment strike.
Photographer David Corio’s archive offers a glimpse inside a revolutionary era of music and nightlife.