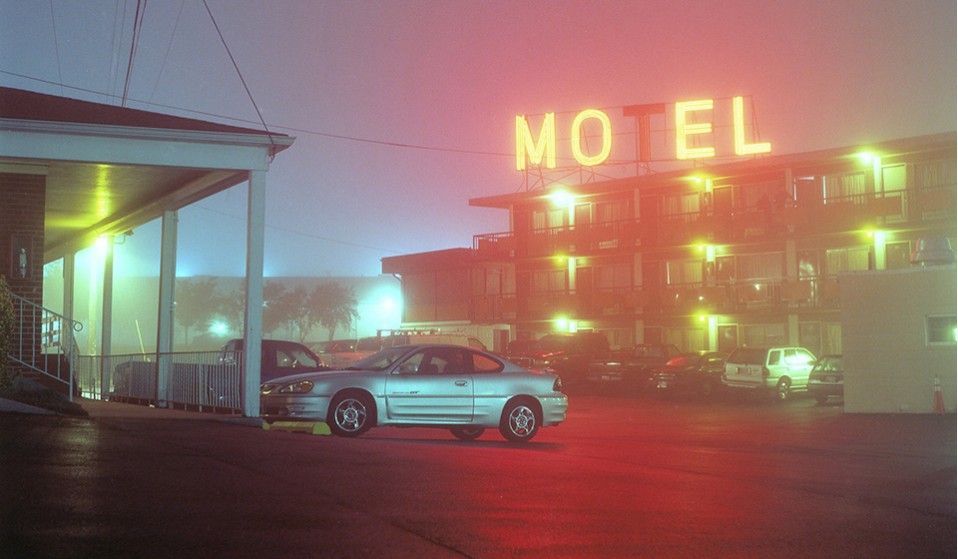 From misty nightscapes to civil unrest, Josh Sinn has spent years capturing the heart of a complex, often misunderstood city.

From misty nightscapes to civil unrest, Josh Sinn has spent years capturing the heart of a complex, often misunderstood city.

Josh Sinn likes to stay up late, scouring the streets for moments worth preserving.

It could be a police patrol, bit and pieces of debris or a glowing motel that looks like an Edward Hopper painting come to life. 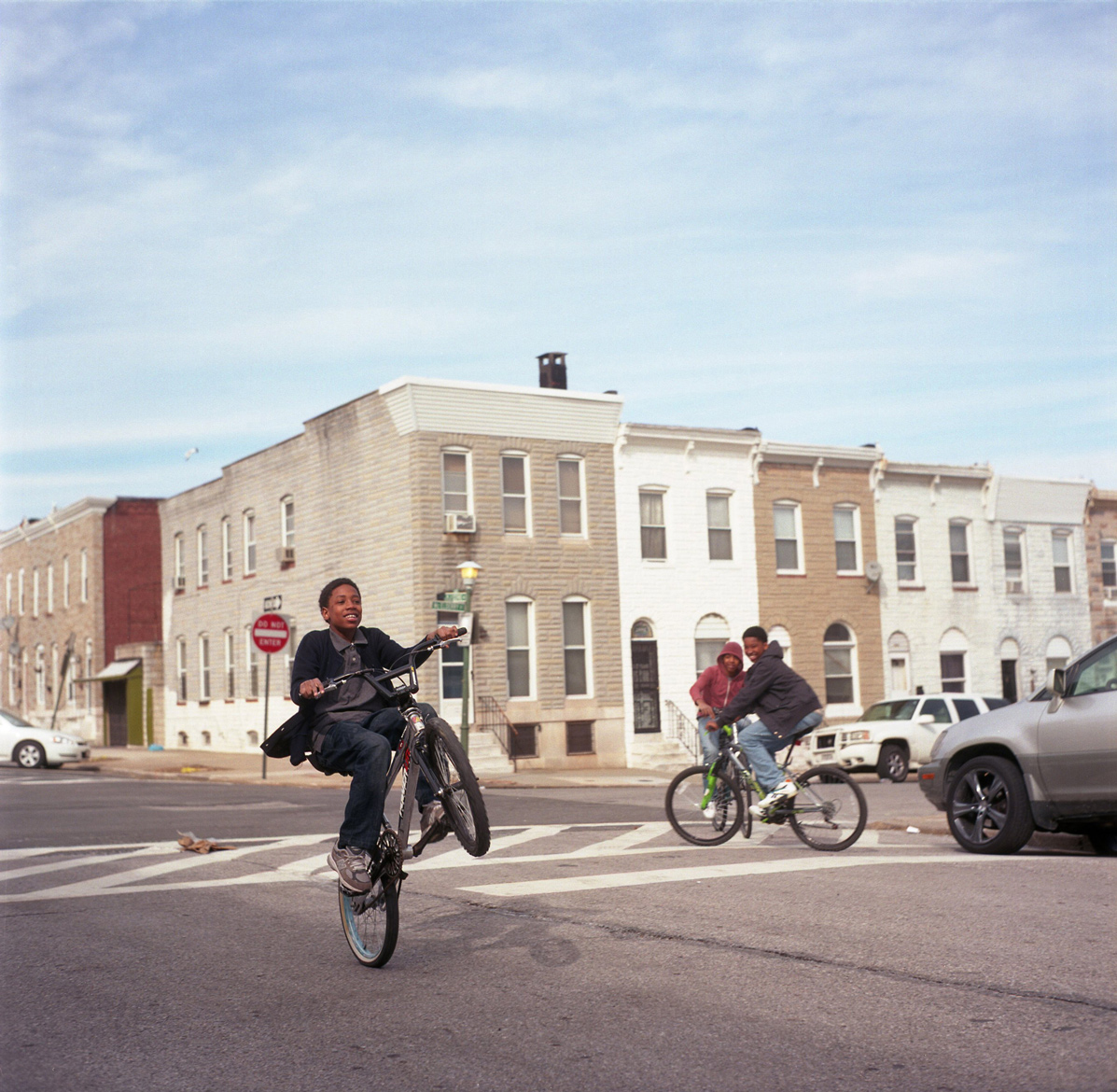 It started when Josh began taking a high school photography class in Maryland – the same class at the same school where he teaches photography now.

“I really wasn’t very good, but it started opening my eyes up to the world around me,” he says.

“As time went on and I started refining my skills, it became a way for me to connect to others.

“I could be a really shy person, especially when meeting new people, but photography chipped away at that for me. I was so interested in people that it kind of had to happen.” 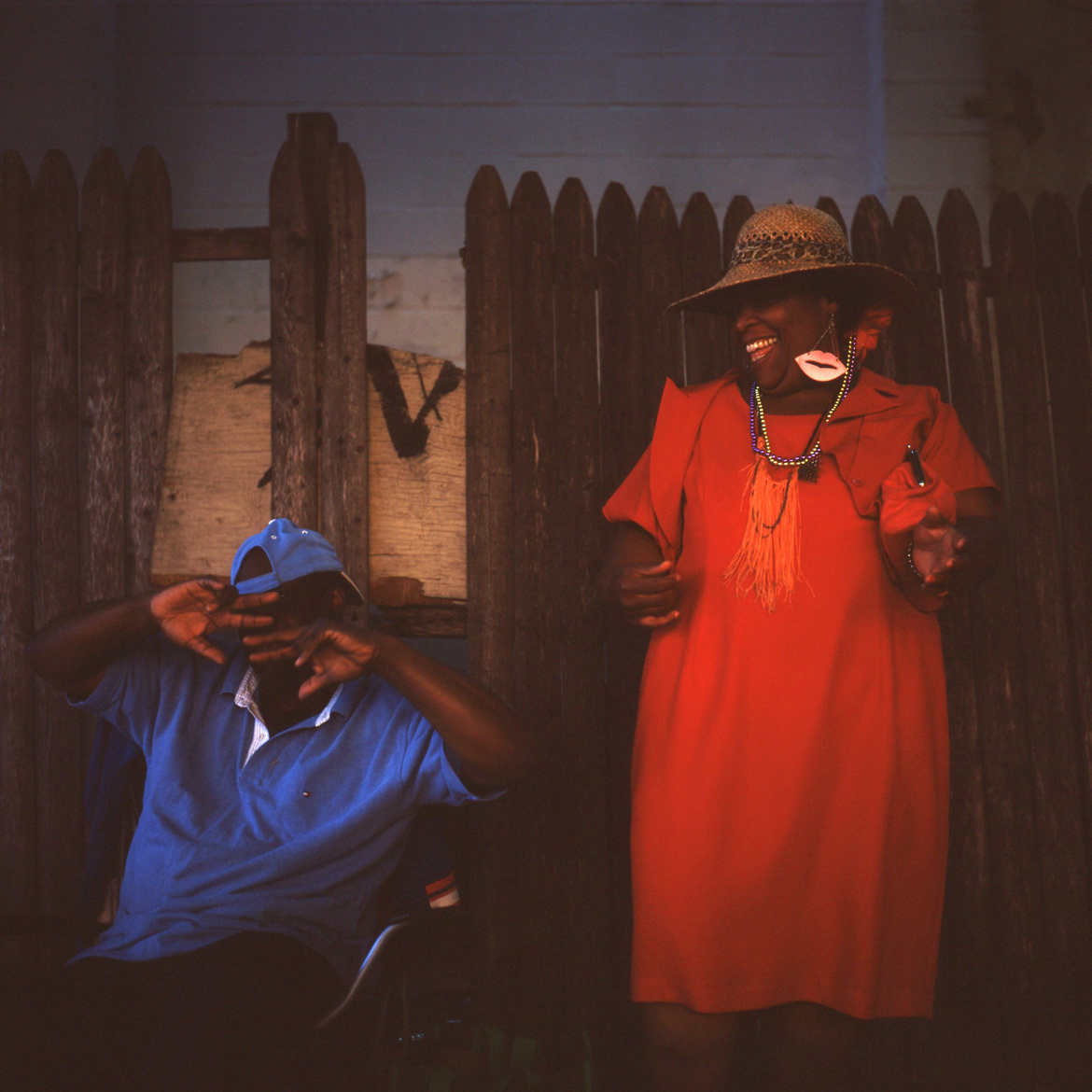 In the time since then, Josh has founded Cadillac Ranch Dressing – a film photography zine – and launched several photo projects – including Hard Town by the Sea, Fogged Up and Not a Moment, but a Movement – which have kept on growing and adapting, much like the city itself.

Can you talk me through the various stages of your career, the turning points you’ve reached and the lessons learned?
I definitely look at my work in stages based on what I was interested in at the time more than specific projects, since I tend to work in a way that fosters cohesion after the work’s been shot. 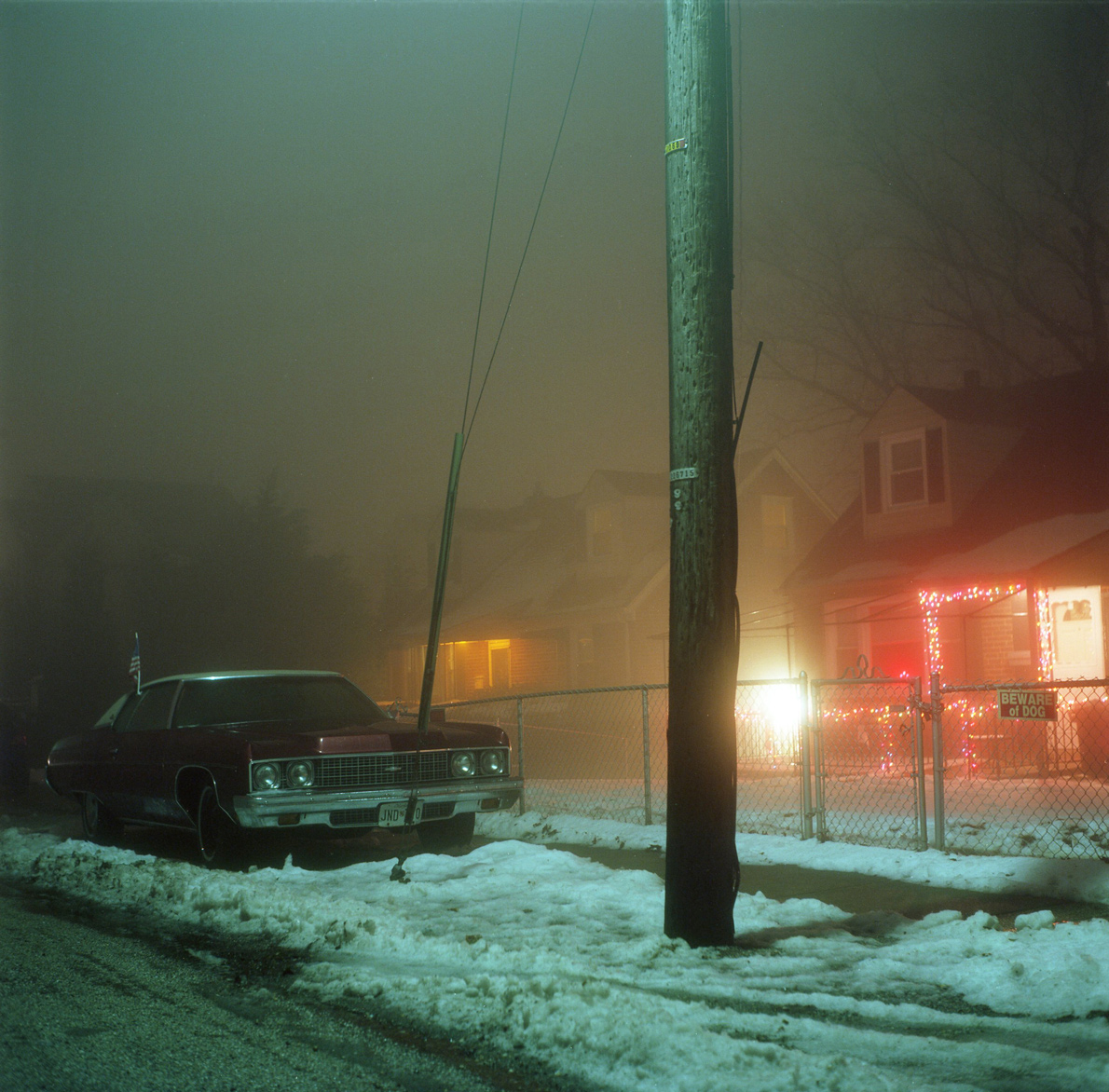 I think the first project that really felt like a ‘thing’ was what eventually became Hard Town by the Sea, which, to me, is still in progress. Really, any of my work about Baltimore tends to remain on the ‘in progress’ list.

The series began as my undergrad senior thesis [at the University of Maryland], which centred around Baltimore landscapes at night with social influences like deterioration, graffiti, cars – anything, really, with human influence.

The relationship I was in at the time was crumbling and plunging me into a really bad spot, so in an attempt to not completely submerge myself in misery, I fought my feelings by keeping busy shooting. 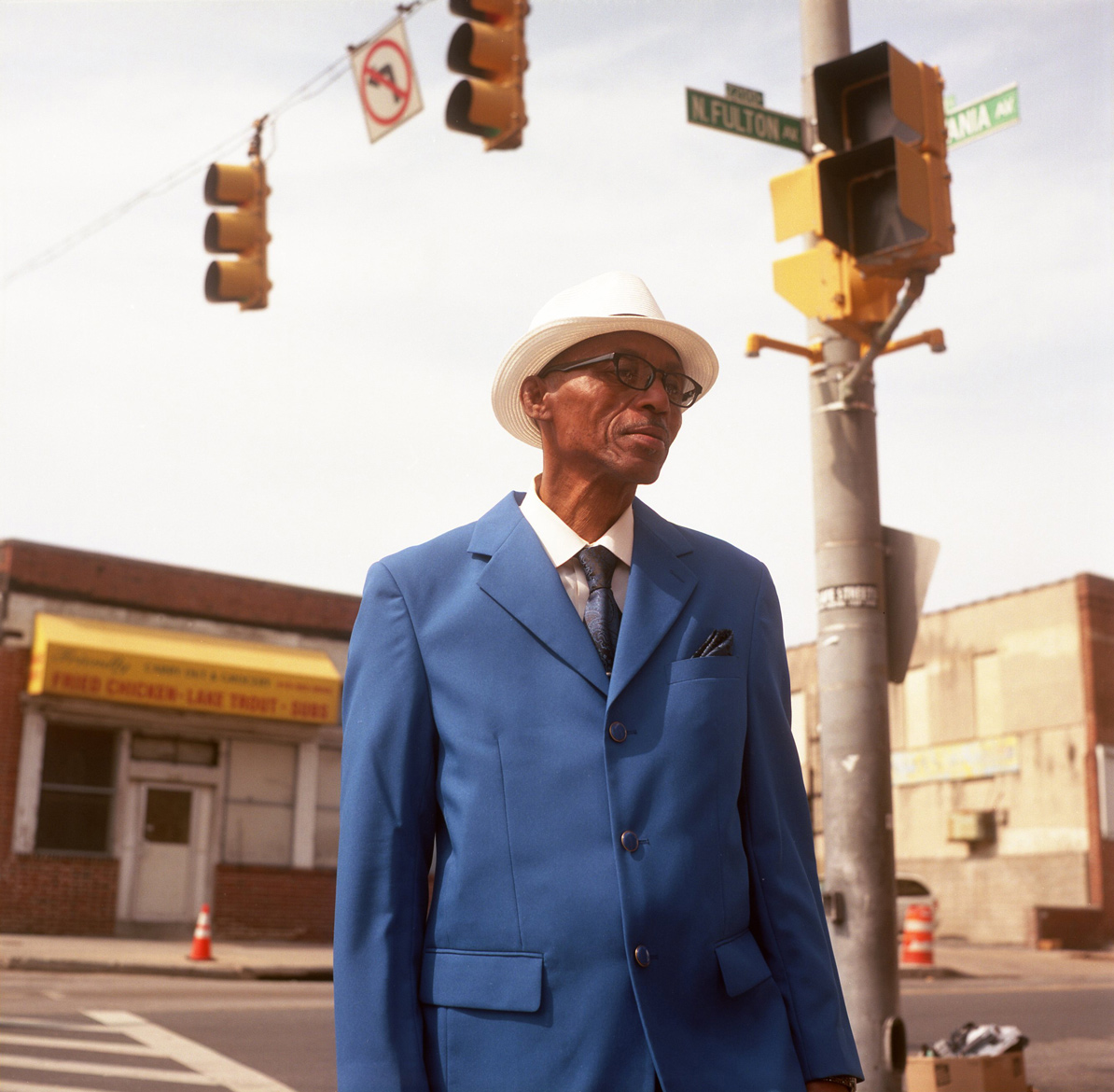 Often going out with [Baltimore photographers] Patrick Joust and Bryan Vana, I shot roll after roll of what I still think is some of my best work.

After graduating college, I bounced around doing different stuff like working for a non-profit and bar-backing, but I always shot photos.

As much as I enjoyed the work in Hard Town by the Sea and my other related and unrelated landscapes, it wasn’t quite addressing certain aspects about Baltimore the way I wanted it to. 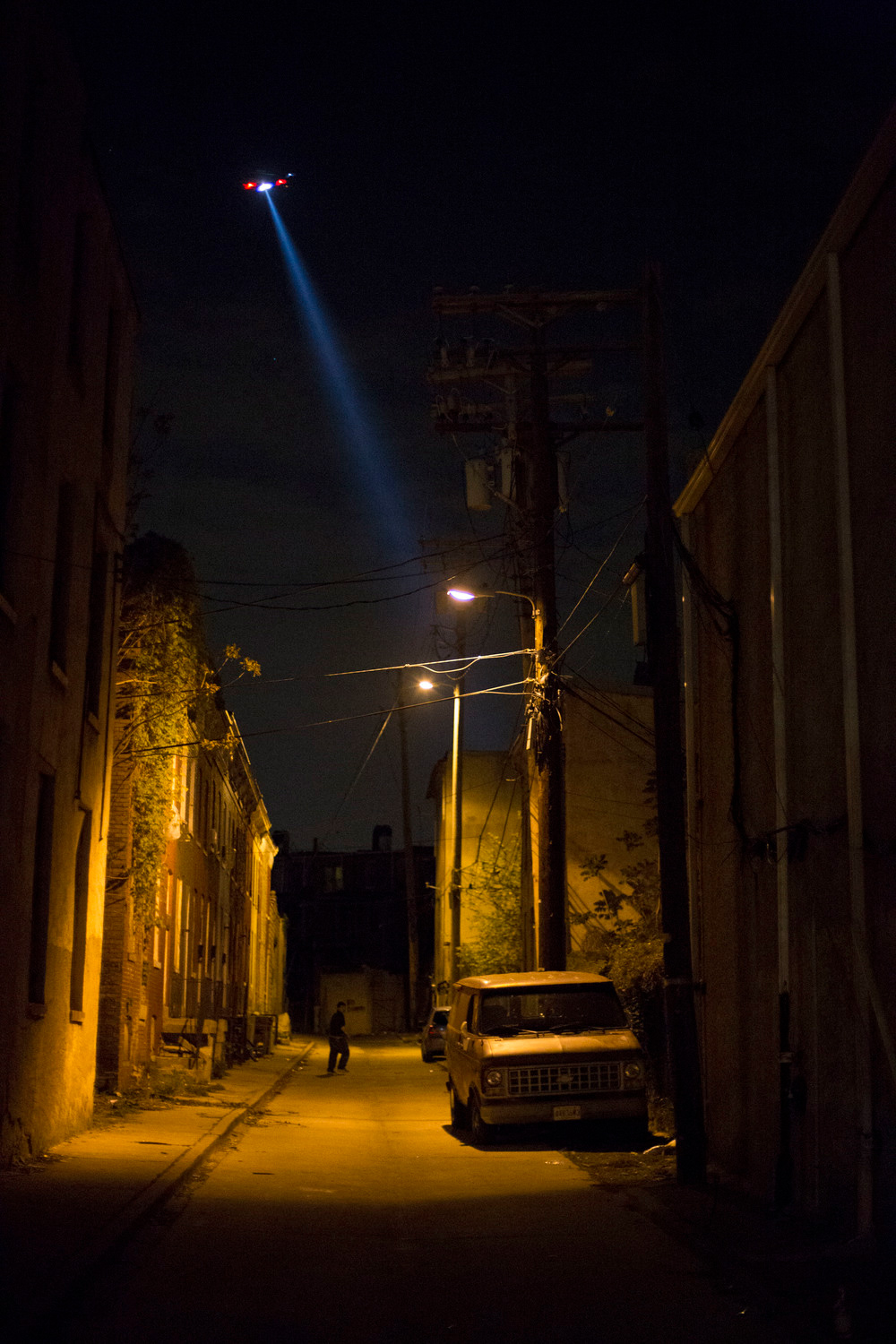 Around 2014, my work started taking a more conscious approach as I was becoming much more informed about the issues surrounding Baltimore, specifically the poverty, systematic racism and police misconduct.

The police killings of Michael Brown and Eric Garner were bringing police brutality back into the spotlight and almost every major city in America reacted in waves of protest, with Baltimore being no different.

I felt compelled to document the movement, not just for others to see, but possibly my kids to see. 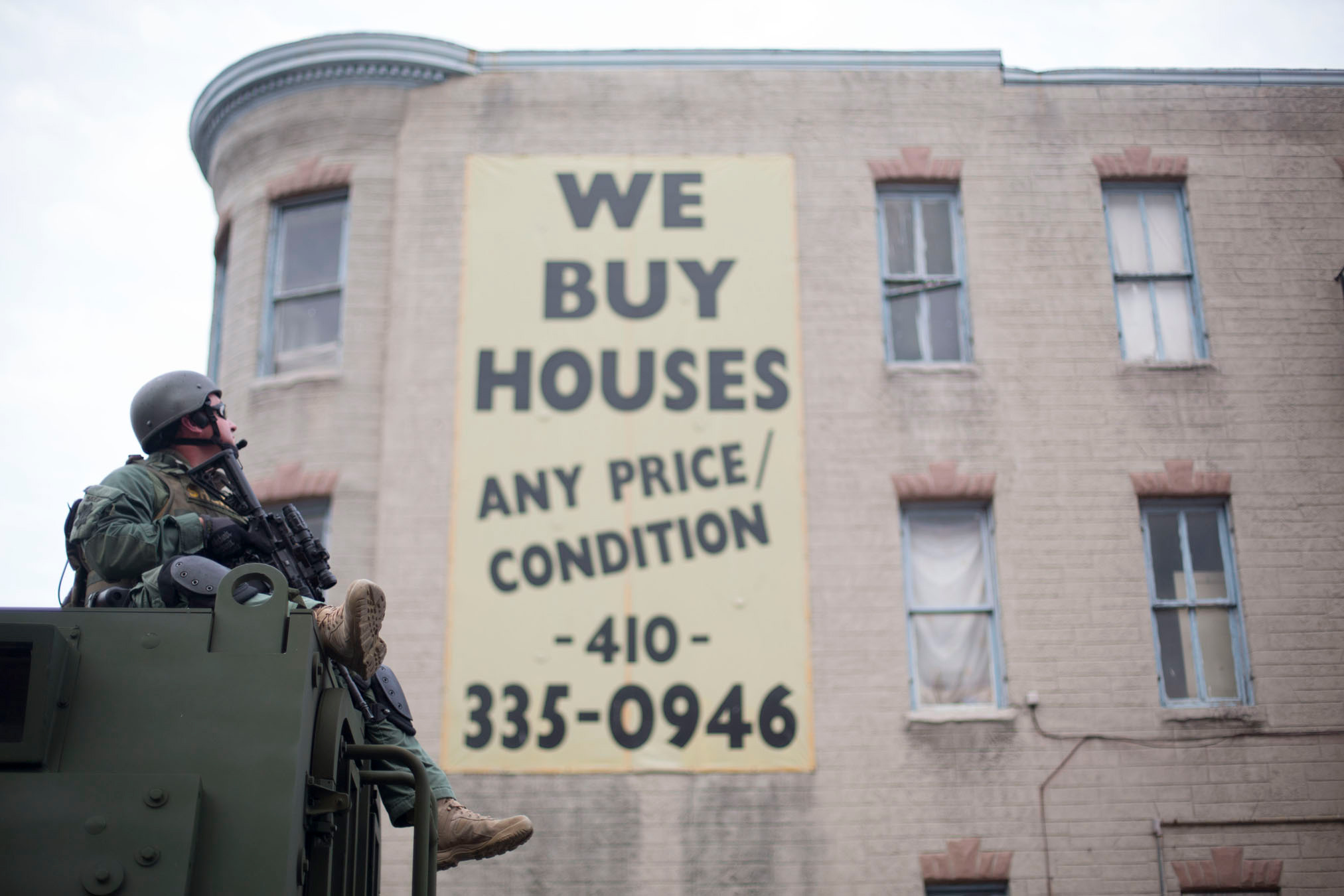 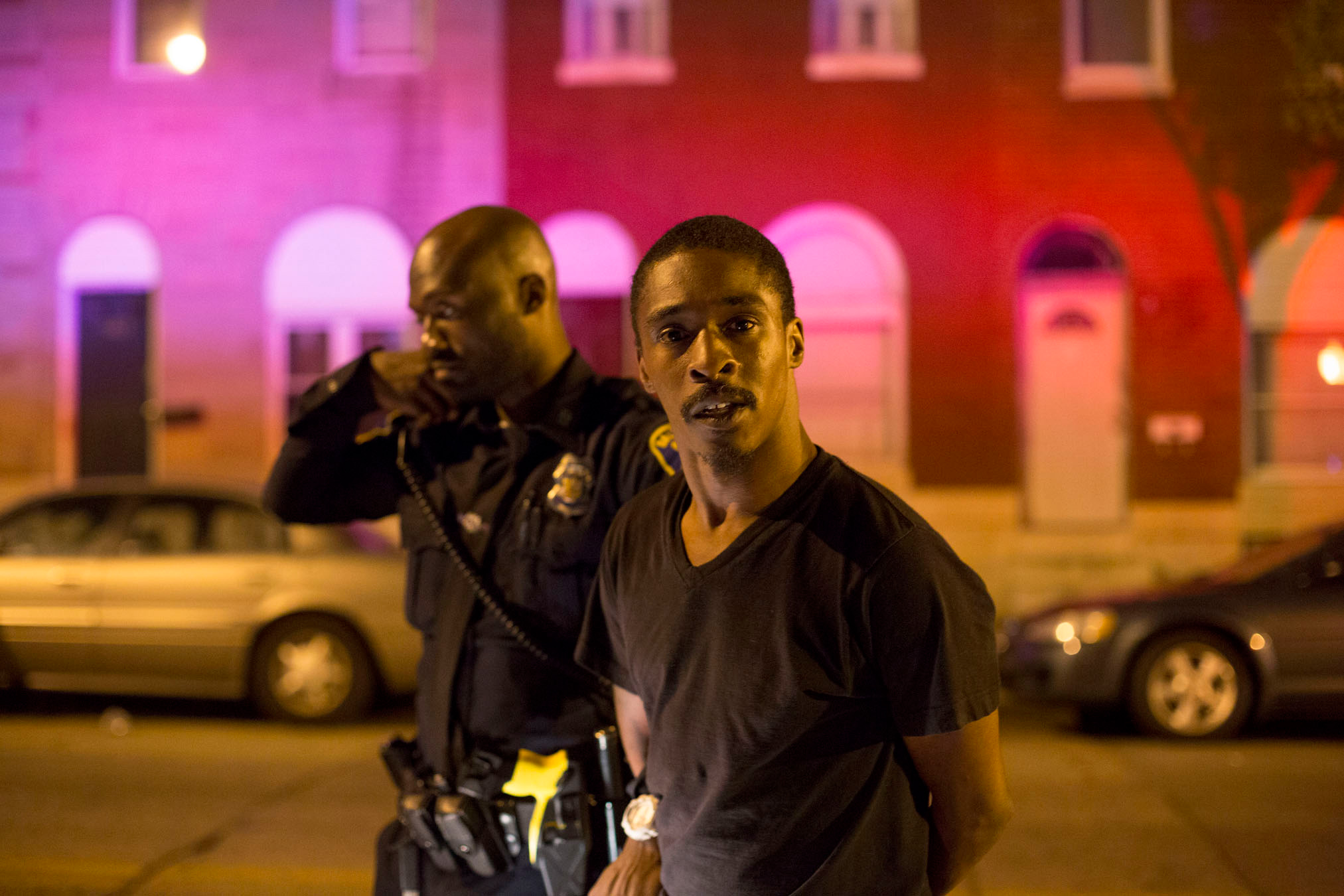 I finally felt some sort of importance with the work I was creating, but I couldn’t imagine that Baltimore would draw national attention of that level, despite knowing that type of police violence was happening.

On 19 April 2015, Freddie Gray, a Baltimore resident of the Sandtown-Winchester neighbourhood, died from injuries sustained while in Baltimore Police custody a week prior.

Protests started immediately at the Western District police station and I spent the next two weeks documenting the growing numbers and attention.

It was something I felt that I needed to support, but often felt conflicted about documenting it as an outsider to the neighbourhood, especially after seeing national media pour in after the riots. 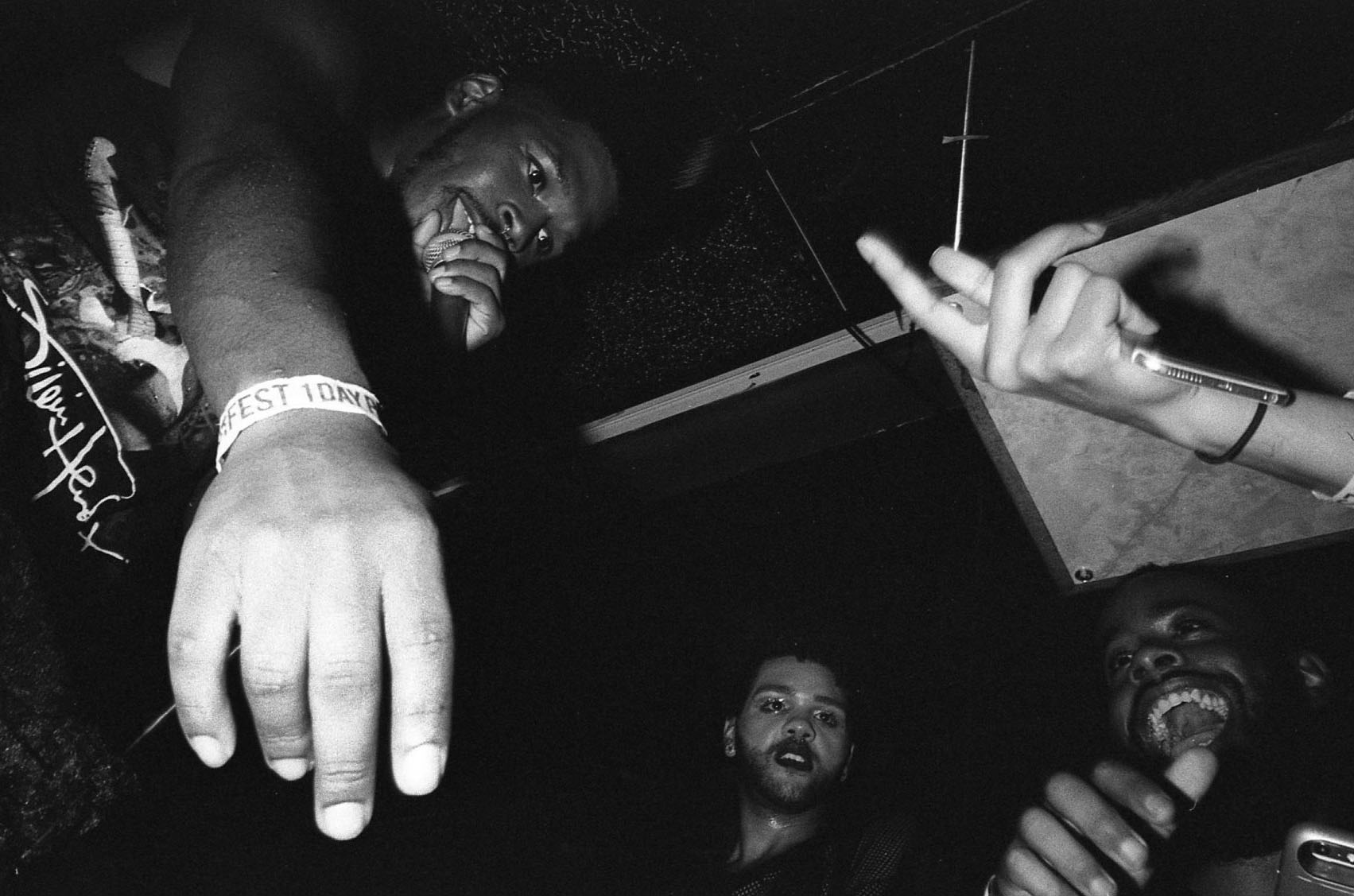 Now I’ve been teaching high school photography for the last two years, which has restricted how much time I can devote to shooting photos, but it’s allowed me the opportunity to create a considerable amount of work during the summer.

My goal is to focus on a new long term project every year, but there’s just so much I want to do that it’s difficult to prioritise. I’m at a point where I feel pretty happy about the quality of my overall work, but I’m always shooting to learn.

How do you balance the responsibilities you feel towards the communities you document with your desire to tell their story?
It’s something that’s grown as I’ve grown. I think more consciously about the implications of a white photographer shooting photos in predominantly black neighbourhood.

There are a lot of photographers who feel entitled to document the struggle of others and following the Freddie Gray protests, I had to re-evaluate why I felt I was really documenting it.

I now look at photography as a way for me to get in touch with Baltimore more, reflecting my original feelings on it. 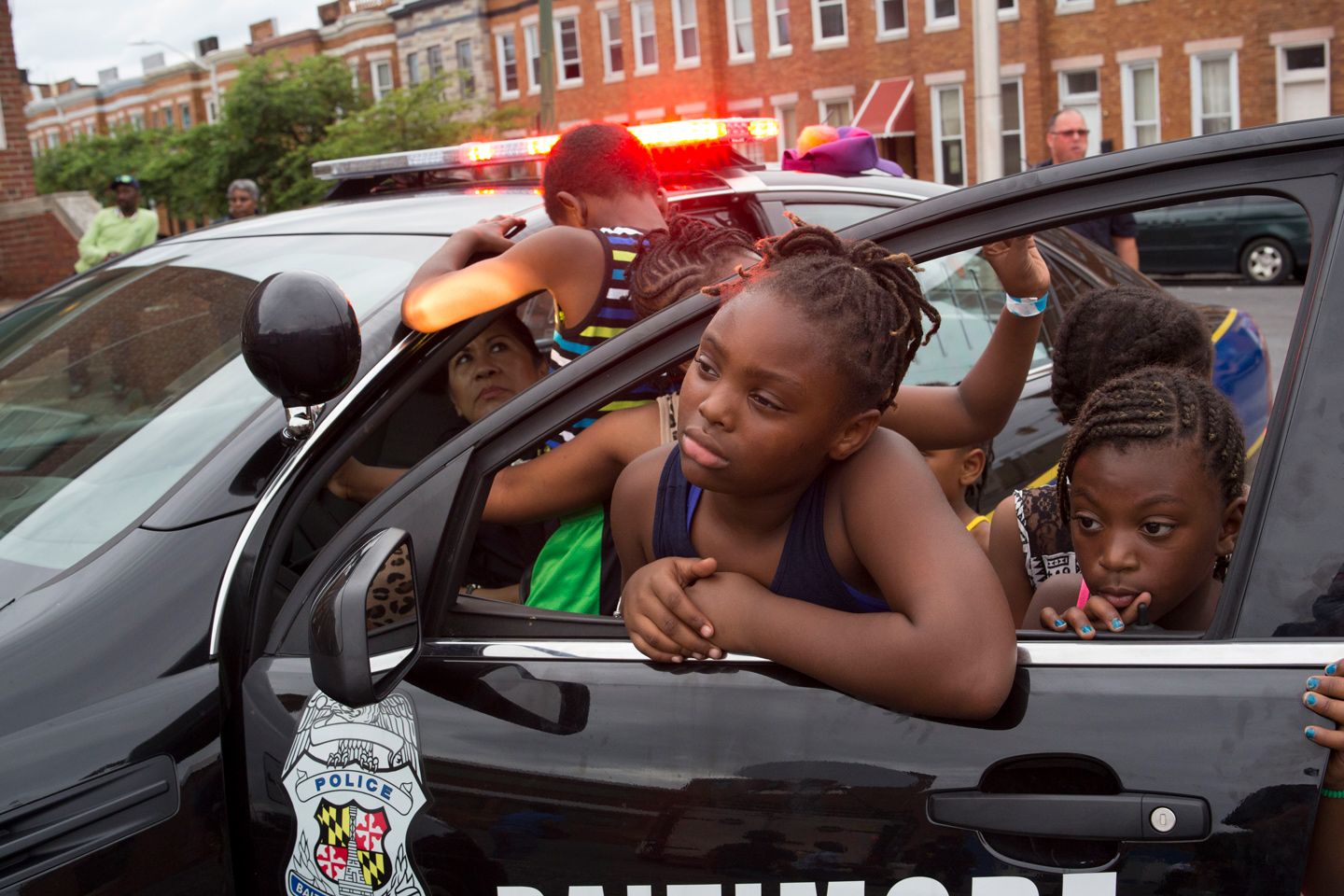 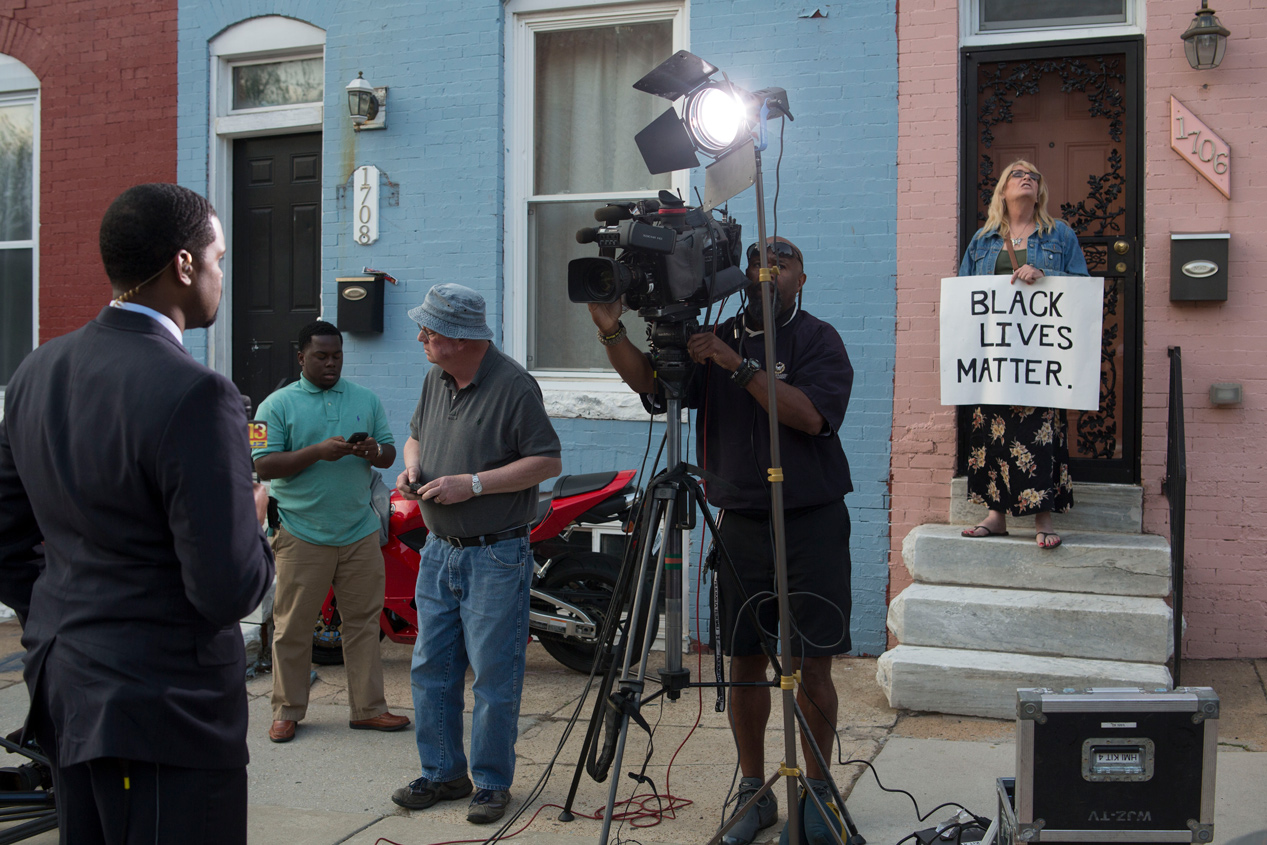 It’s a great way for me to talk with people and get to know certain areas. As cliché as it is, photography truly is a license to get to know the world around you.

I can safely say I would not be making the same work I am now in another city. It really is its own character that I can try to encapsulate, but never fully will.

It’s funny to me because when I moved down from New York City to Maryland in 2003, I was beyond bummed, thinking it’s just another boring Civil War city, but now I’m so incredibly grateful to be here. 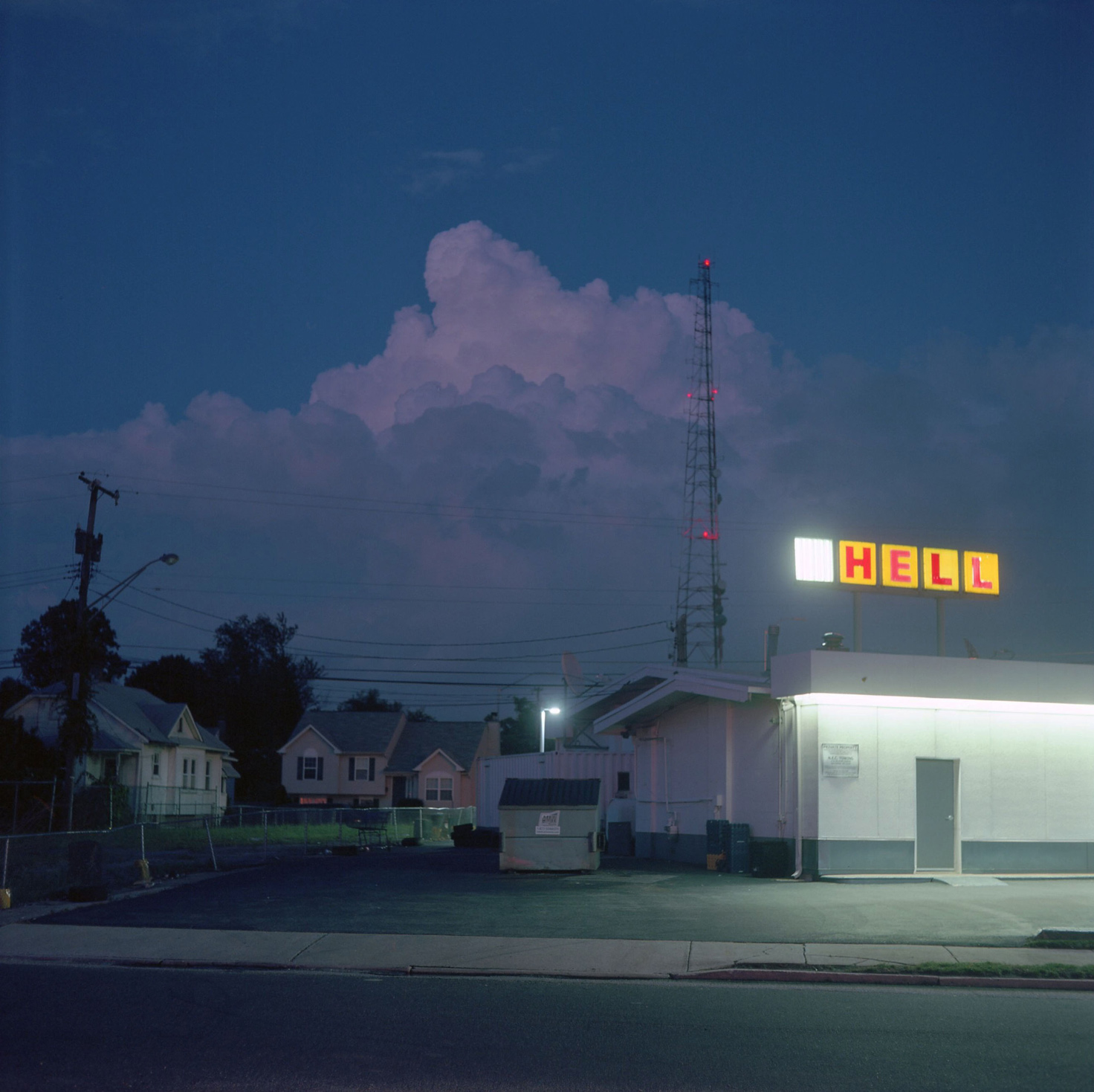 I think people are quick to judge Baltimore based on information they really know nothing about. Some people choose only to see the drugs, violence, and crime; some choose to only see crabs, the Orioles, and the Ravens.

Baltimore is complex, like any American city dealing with similar issues, so to only focus on the bad or focus on the good does it a huge disservice.

You teach photography. What’s the key to developing your own style and finding the right subject matter?
Always keep being influenced by others. I wouldn’t be the photographer I am today without reviewing the work of others, especially the work of many people who I now consider friends. Constantly look through work, both new and old, and style will set itself naturally over time. 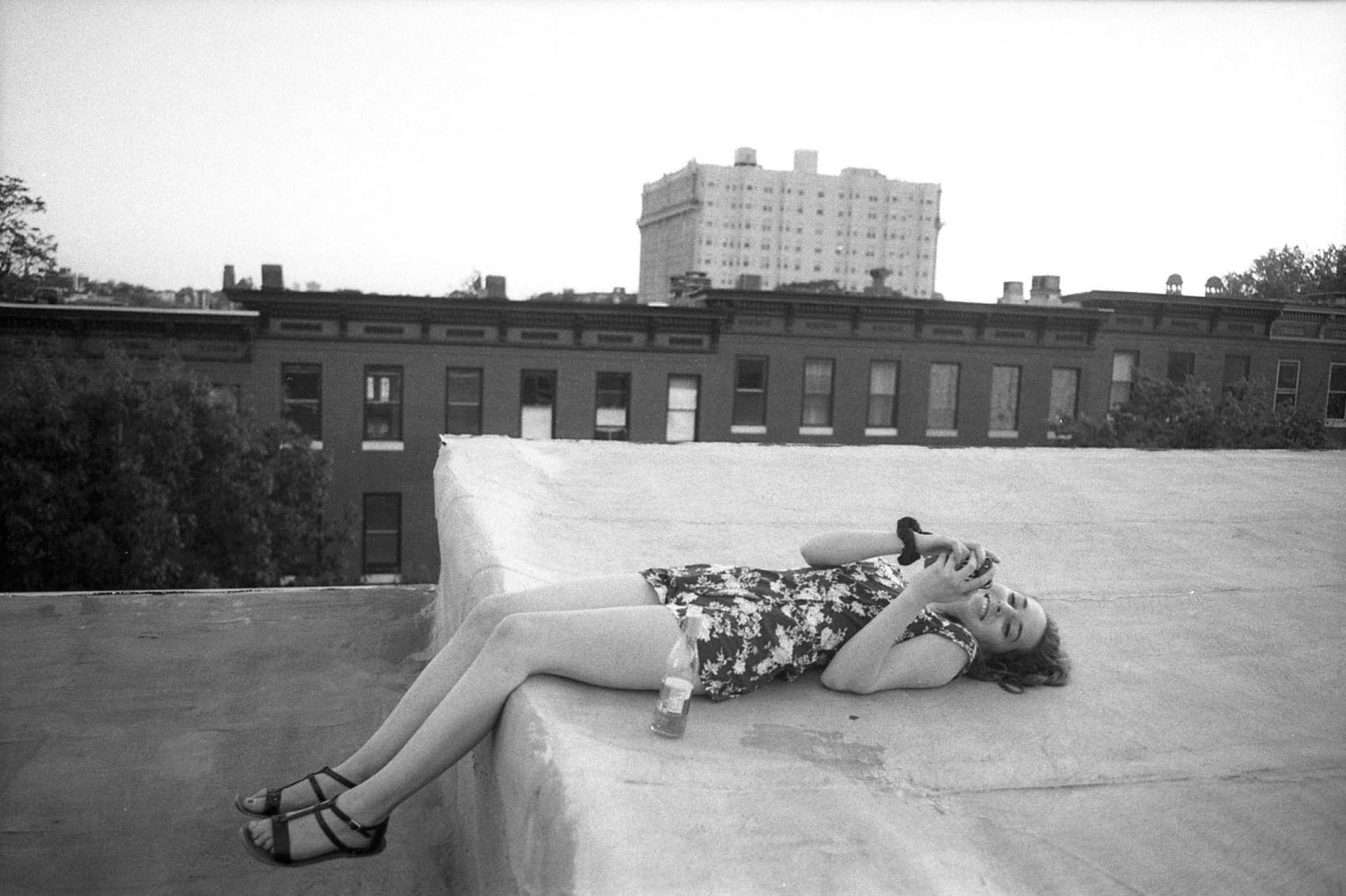 I try and photograph subjects that I feel comfortable with so nothing in the work feels forced. I often tell my students to shoot subject matter that no one else has access to. You live on a farm? Photograph what it’s like to live there. Your mother runs a funeral home? Take some photos of that. Your family likes dog shows? Photograph the next one.

What are some of the most common misconceptions among people starting out in photography?
Beginning photographers can often be intimidated by good work out there and I hear it every now and then from my students too. 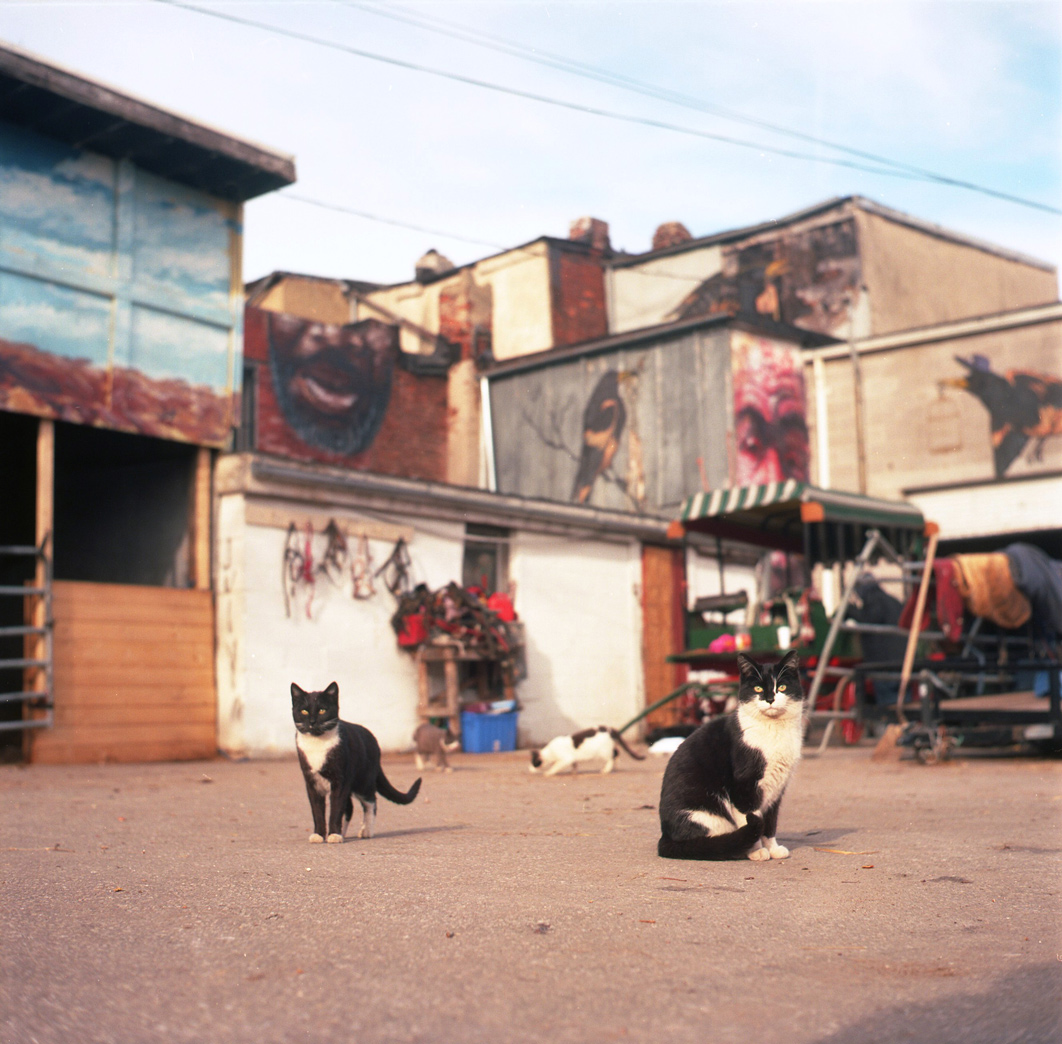 I try to remind students to shoot whatever they’d like and that no one else’s opinion matters as long as they remain committed and put effort into it.

But like most advice, it’s easier said than done. I often find myself shooting stuff that I feel my followers or any audience would like, which does a disservice to myself

What are some of your favourite photobooks?
One of my earliest is Boogie’s It’s All Good. That series of photographs shook me as a 19-year-old fledgling photographer just by its sheer directness and tone. It taught me that photographs didn’t always have to be crystal clear or follow the “rules”. I think about those photos a lot. 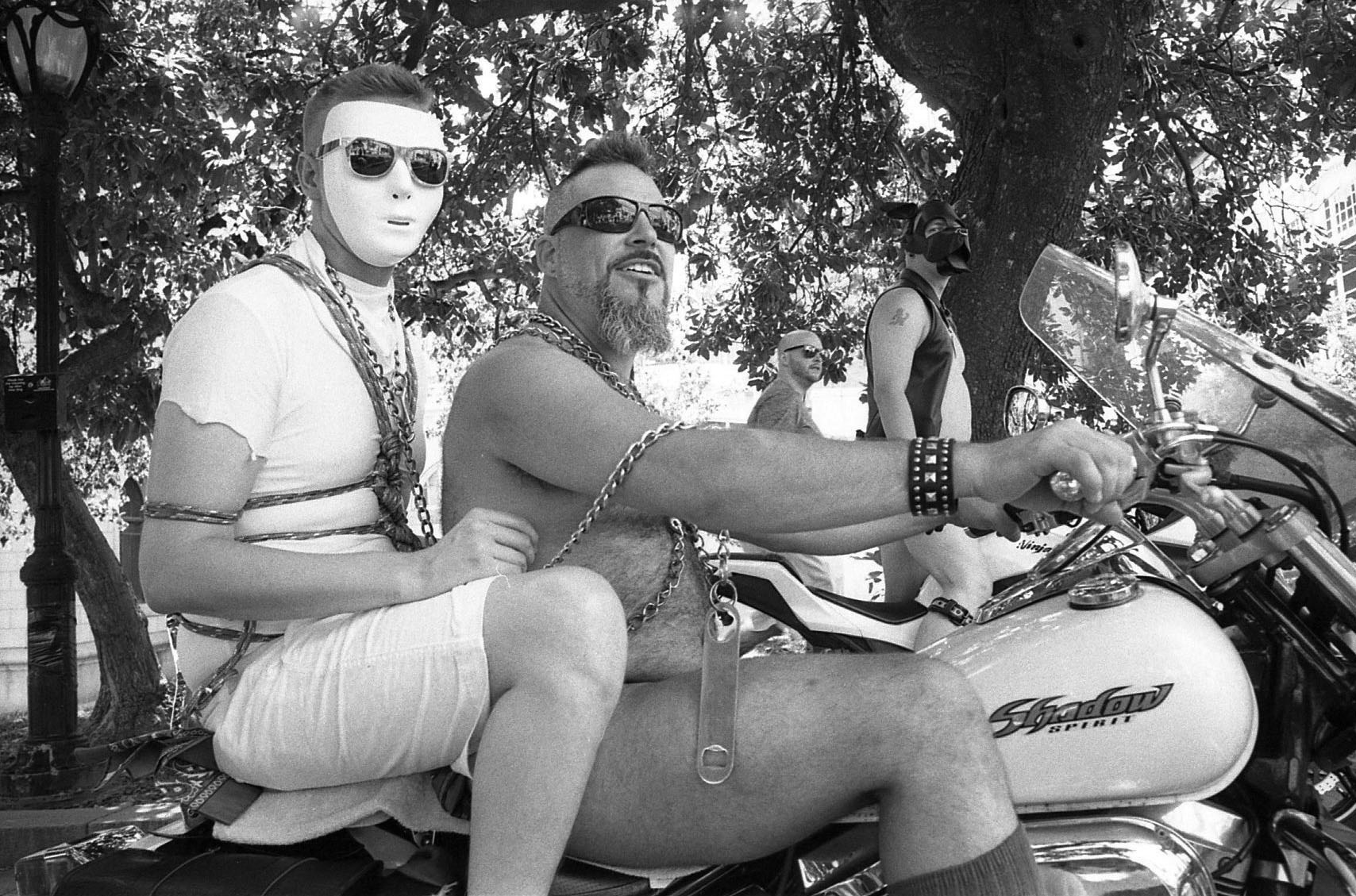 Another one I’ll mention is Donna Ferrato’s Living With the Enemy. It’s such an intelligent and responsible approach to the heavy subject of domestic violence, covered so many aspects of it, and transcended the project becoming an advocate for abused women. Her work shows how important photographs can be to change views and expose issues hurting our society.

Finally, Jill Freedman’s Street Cops is another one of my all-time favourites. The work is such an intense look at humanity, much like It’s All Good, but from the opposite direction of law enforcement.

Her genuine approach to a subject that she felt strongly about really provides a good precedent for how one photographs a controversial topic. Freedman is such a tough human and I respect her so much. 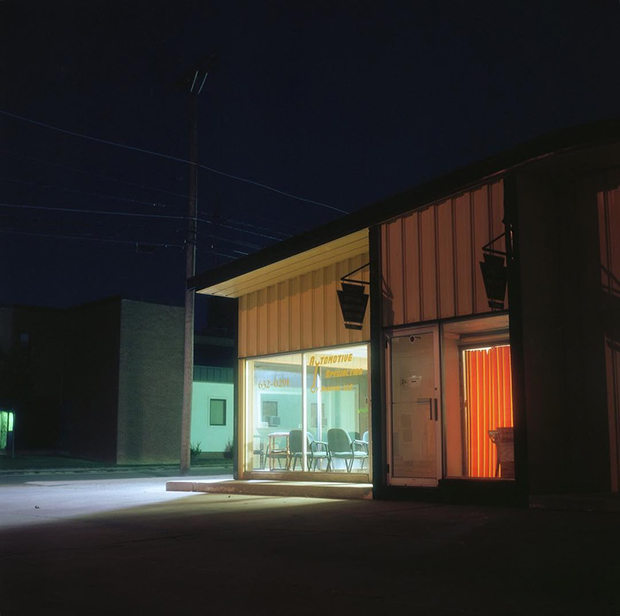 Linkedin
RELATED ARTICLES
OTHER ARTICLES
At his West Bank restaurant, Fadi Kattan established himself as the voice of modern Palestinian cuisine. Now, he’s bringing his innovative, bold flavours to the UK’s capital.
A new law change is enabling Britain’s donor-conceived children to know the truth about their origins – but campaigners say the fertility industry must do more to protect people.
Activists and campaigners are fighting back against new laws that would seriously undermine the ability to take industrial action, calling it an attack on fundamental workers' rights.
A new podcast is opening up the conversation between trans women and trans amorous men in the hope of building coalitions.
A new exhibitions brings together the work of photographers who documented the deep unrest of these pivotal decades.
Social prescribing connects people with non-medical support to improve their health and wellbeing – but some experts worry it’s just a stick plaster solution.