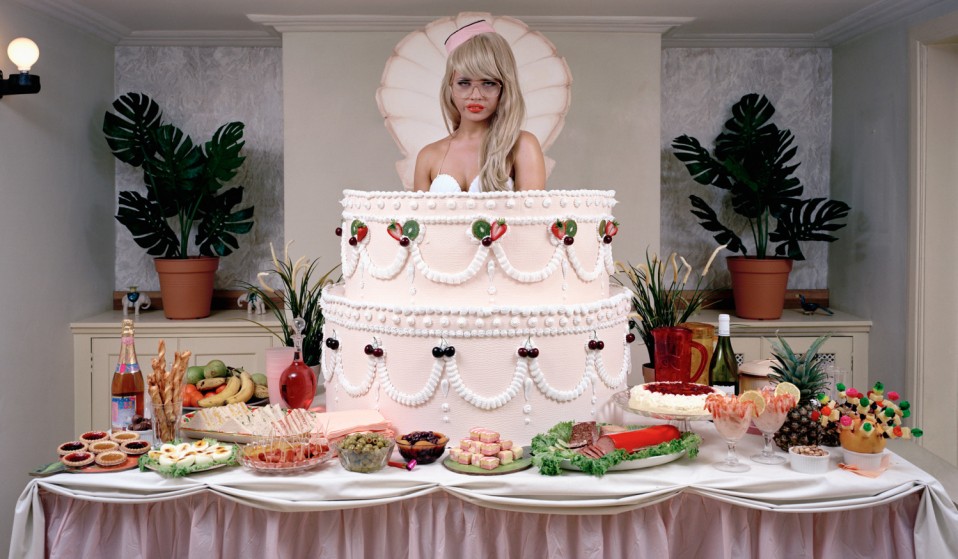 With her alter-ego Joyce in tow, photographer Juno Calypso explores femininity, beauty and youth at Pennsylvania’s number one destination for honeymooners and disillusioned couples.

With her alter-ego Joyce in tow, photographer Juno Calypso explores femininity, beauty and youth at Pennsylvania’s number one destination for honeymooners and disillusioned couples.

Juno Calypso’s photography explores our ideals of female beauty and youth, and the laboured construction of femininity in an unsettling and often humorous way. Her almost Lynchian photographs focus primarily on her own character and muse, Joyce.

Works such as ‘Popcorn Venus’ (above) cast Joyce in eye-grabbing environments – in this case a giant cake surrounded by a buffet of odorous food. Her latest project saw her put Joyce up in a suite of a hotel in Pennsylvania for a week in photos such as ‘The Honeymoon Suite’ and ‘A Dream In Green’.

Calypso graduated with a BA in photography from the London College of Communication in 2012, and has begun to make a name for herself by featuring in a series of exhibitions and books over the last half a dozen years, as well as winning a few awards.

When did you start exploring the idea of femininity and beauty in your photography?
When I was a teenager I loved taking pictures of myself or my friends and photoshopping them to look hyper-real, glossy and flawless. That was my only aim. Then while I was at London College of Communication I began to take funny pictures of myself looking bored and ugly. Those were the images that started this project, I liked the reaction I’d get from people when they saw them. It sparked a more interesting reaction than just, ‘Oh yeah, that’s a nice picture of a nice girl.’ 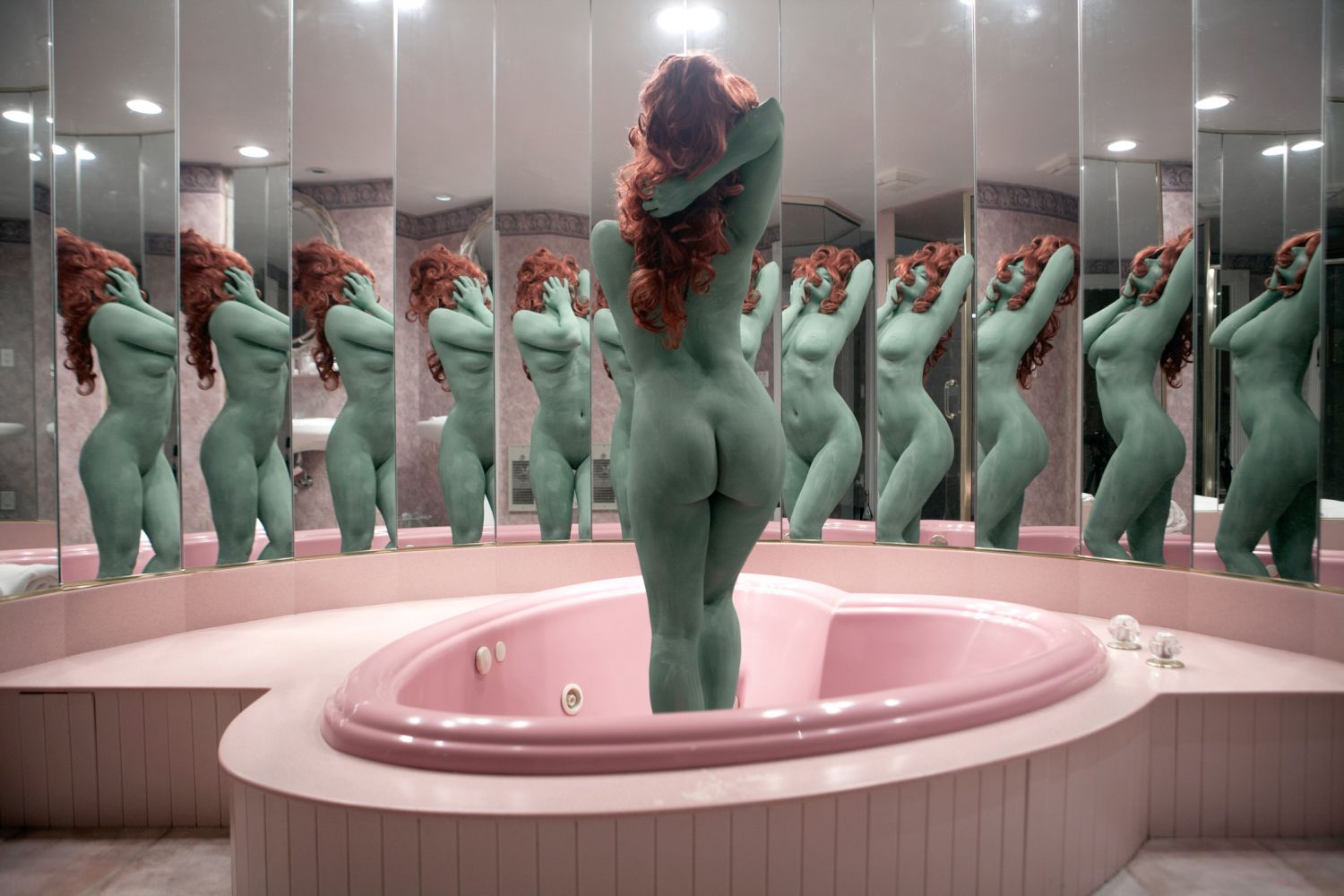 A Dream in Green

The art of photography and video seems to freeze to the idea of youth and beauty. Is that a factor that drew you to the subject matter in your work?
Naomi Wolf said that as women, we’re put in this state where we are simultaneously mourning our youth and fearing our future decay. We’re never really satisfied in the moment. I think that’s why a lot of women are drawn to photography and video – to freeze ourselves in time. Something to look back on when we’re old. I think it’s so stupid though. I should be excited to be able to take pictures of my wrinkled body in the future, but I know I won’t be.

Where did your character of Joyce emerge from?
It was from those pictures I mentioned from art school of me looking sad and bored. I didn’t think of it as a character but everyone was so interested in her as one. I had to give my end of year project a name so I went with Joyce, and now it’s stuck. She still doesn’t have a story though, I like to keep it ambiguous. 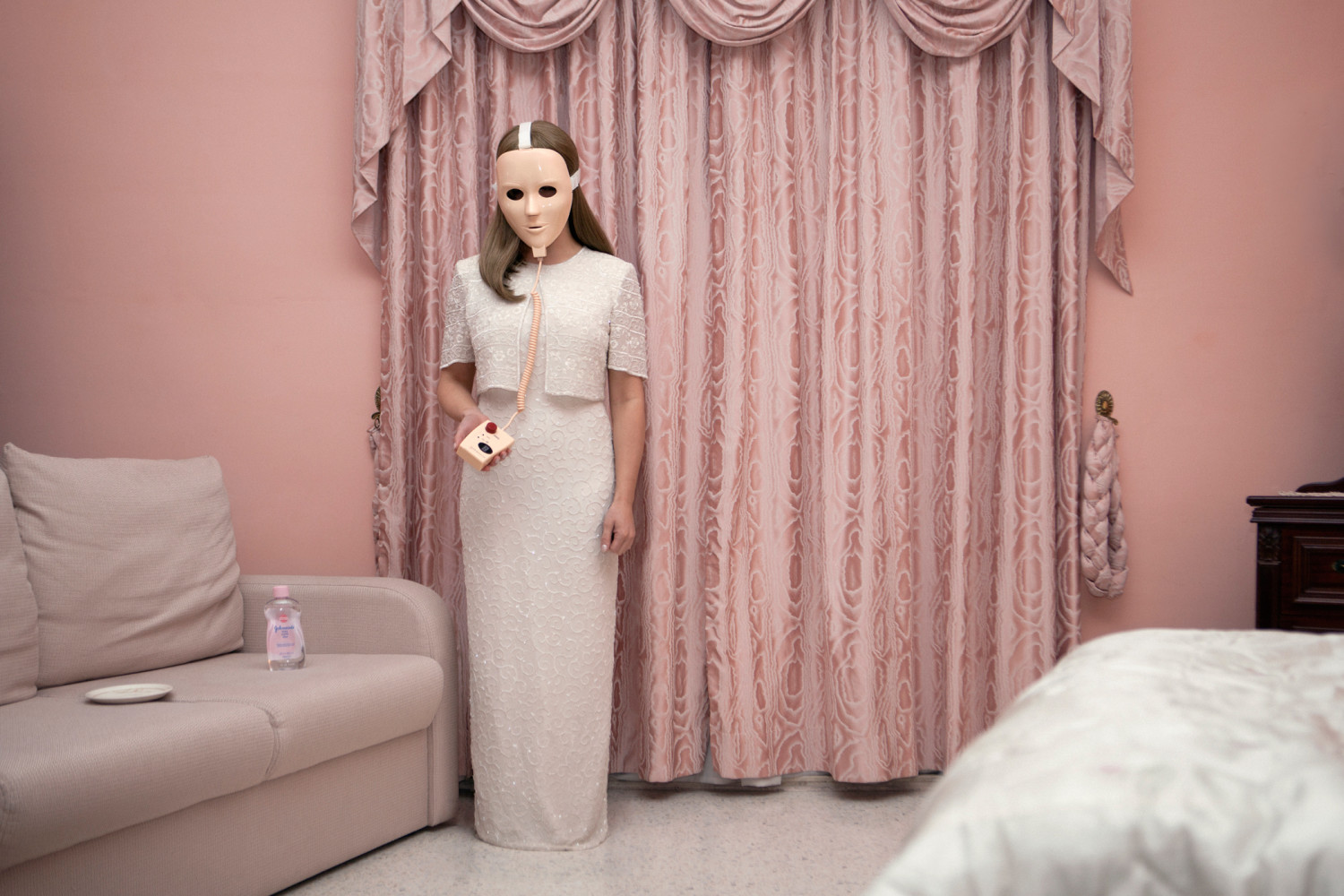 12 Reasons You’re Tired All The Time

Do you view yourself as an actress as well as a photographer?
When I was in primary school I was hell bent on being an actress. Then suddenly I became shy and wouldn’t go to my audition at a kids drama school. I always think about what could have happened. Then again, I’d have lost my mind by now. It’s not the life for me. I prefer doing my own weird thing.

What was it about a hotel suite that drew you (and Joyce) there?
The heart shaped whirlpool and the mirrors. I knew the mirrors would be perfect for film. 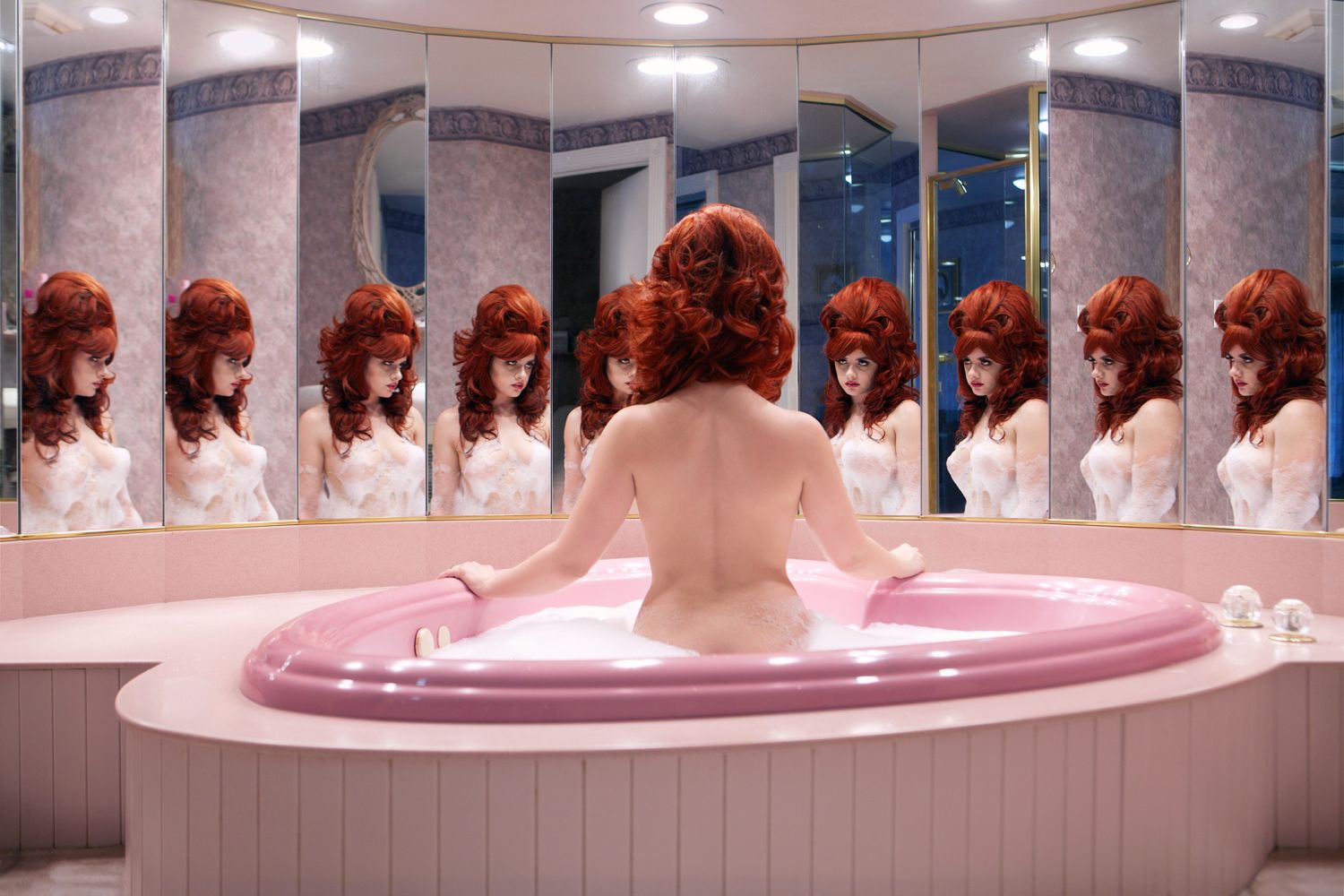 How much time does it take to construct a photograph on the scale of, say, ‘Popcorn Venus’?
That was during art school so the cake took me a couple weeks of making it in the evenings. Then I set up the shot and had everything there, including all the real food, for about three days before I got the final image done in between going to school. I can still remember exactly how bad it smelt. Like sweet, sweaty meat.

Would you say there’s a comic nature to your photographs?
Definitely. I love comedy. I love making people laugh. I love off key dark British comedy. I grew up watching Father Ted, Smack the Pony and anything with Chris Morris. 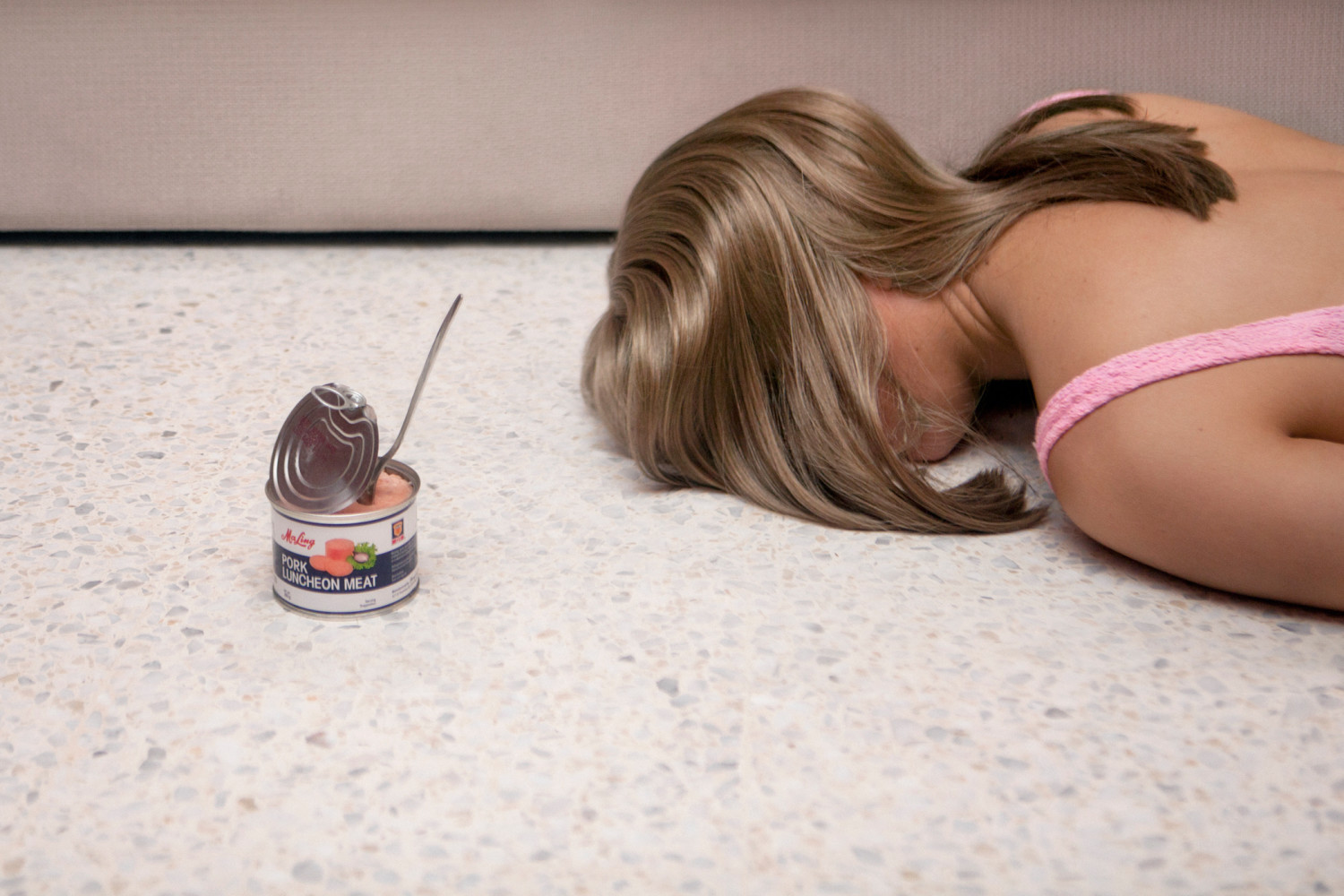 Do you have any other characters that you want to explore next? Do have any other projects in the pipeline?
I have no idea to be honest. I like to work through improvisation, or researching props or locations for hours till something catches my eye and I’ll go off on a tangent with that. I’ve just been signed with London based production company COMPULSORY. So I’ll be working on more moving image based work soon, alongside making new work of my own.

Linkedin
OTHER ARTICLES
Theo McInnes’s photos of the annual event provide an intriguing snapshot of contemporary Britain.
After building his reputation covering the US civil rights movement in the 1960s, the photographer went on to produce some of the most enduring images of the past century.
AI companies that develop image-generators using copyrighted artwork from the internet are coming under fire from artists who say that it amounts to theft.
Following the release of his debut single, Deyaz talks battling addiction, dealing with his struggles through music, and building a budding music career from his living room.
Photographer Sean Maung reflects on documenting a small town in Pennsylvania afflicted by high levels of unemployment, poverty, violence, crime, and addiction.
After blocking the Scottish government’s gender recognition reform bill, Westminster is now devising further changes to the law to make it harder for trans people to self-identify.