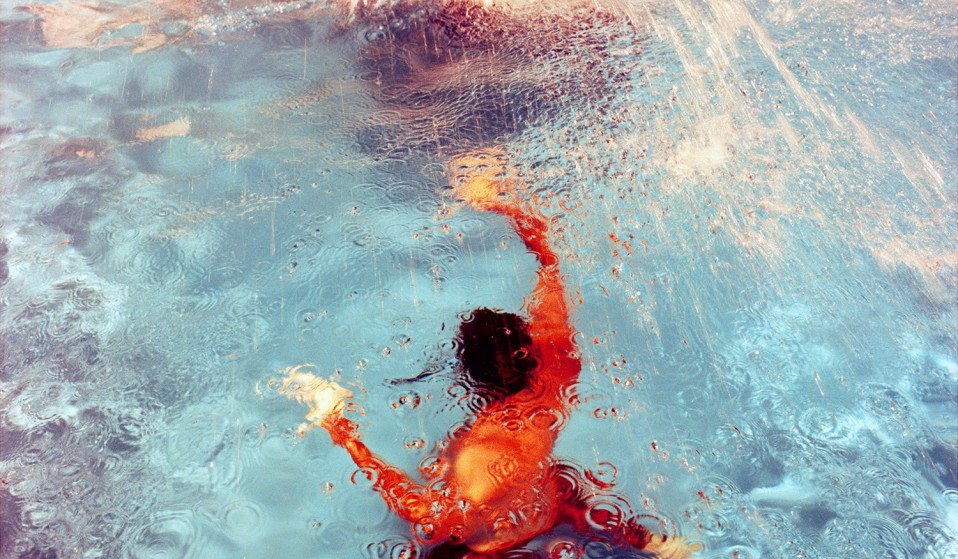 Karine Laval never learnt the dos and don'ts of photography, instead she celebrates creating work that doesn't play by the rules.

Karine Laval never learnt the dos and don'ts of photography, instead she celebrates creating work that doesn't play by the rules.

New York is a city of rigid extremes. It’s a place defined by sharp architectural lines, temperate and cultural disparities, the limits of poverty, wealth, success and failure pushed to their absolute brink. It’s a city that sucks you in and spits you back out again, but there’s little space to get lost floating in-between. For photographer Karine Laval that was always the pull of the city, but over time – whether consciously otherwise – her work has become a way of softening the sharpness, a place to escape in the possibility of what exists beyond the lines.

Having moved to Brooklyn from her native France some 20 years ago, Karine’s studio is her oasis. Developers are circling her building in a now increasingly unaffordable corner of Brooklyn but she is resisting – the only tenant left in a warehouse once alive with other artists, creatives and makers.

As I make the short walk to photographer Karine’s studio in Brooklyn from The Williamsburg Hotel where I’m staying, I’m confronted by searing heat and a torrential downpour, a group of Chassidic jews and a Latino carnival, and a man throwing unused tampons onto passersby from a roof. The walk only takes me twelve minutes. When Karine lets me in and guides me up the stairs, her approach to photography suddenly makes even more sense. 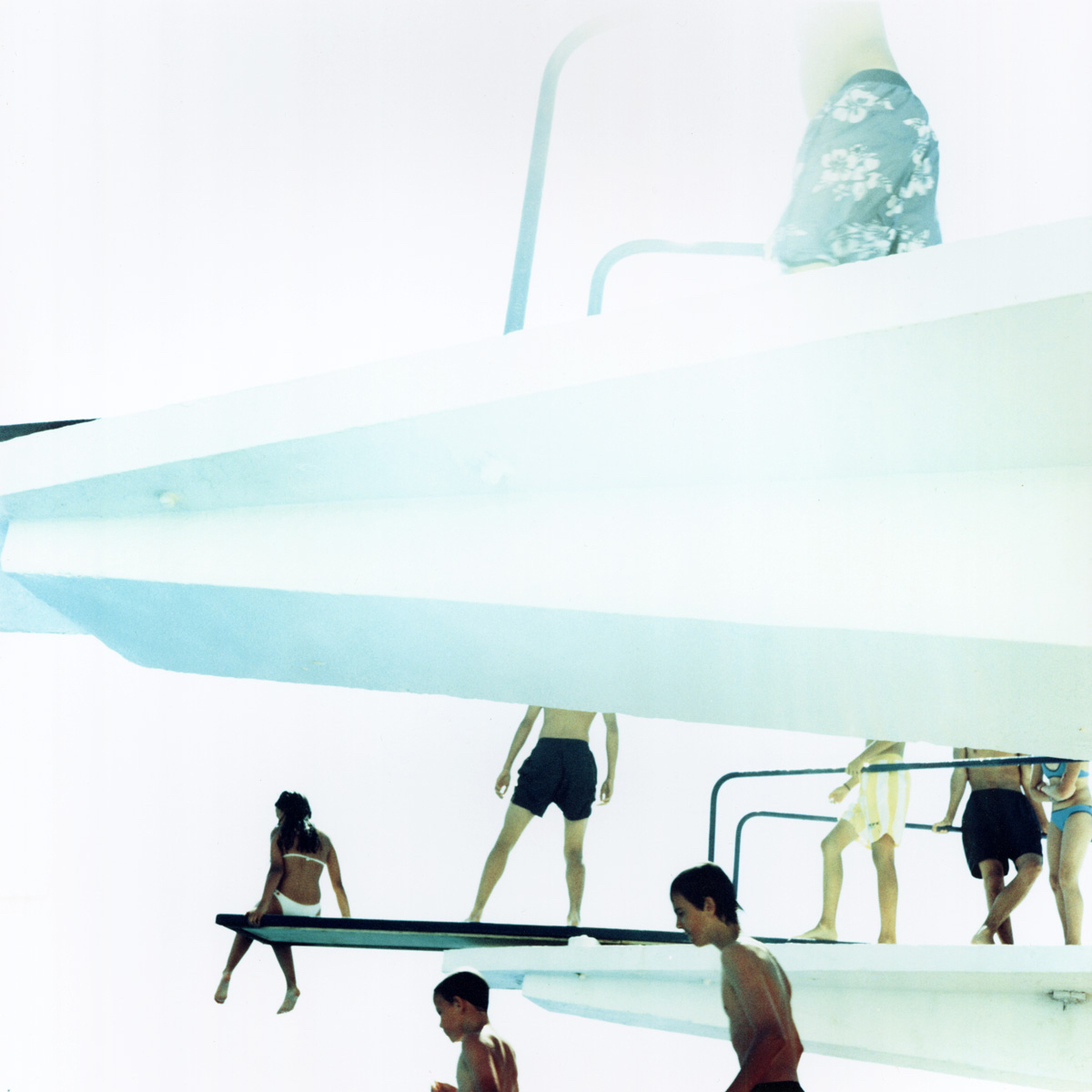 Karine’s most notable work has been an exploration of the swimming pool in Poolscapes, utilising the water and the patterns formed both inside and out of it to challenge the familiar perception we have of the world. Here the water becomes an all-natural bridge to more surreal and dreamlike dimension. “Central to my practice of photography is taking our perceptions of the world and bending or distorting them,” she says soothingly, sipping at a glass of carbonated water as we settle down to talk in the studio.

Her newest project – Heterotopia – toys with those very ideas, densely layered photographs of gardens and other manicured “natural” environments are created by combining analogue techniques and digital technologies.

“Even when I was working with swimming pools I was not that interested in capturing a specific moment of bathing,” she continues. “I was after my own memories somehow, from my childhood, and looking at how to trigger the viewers’ memories too.” 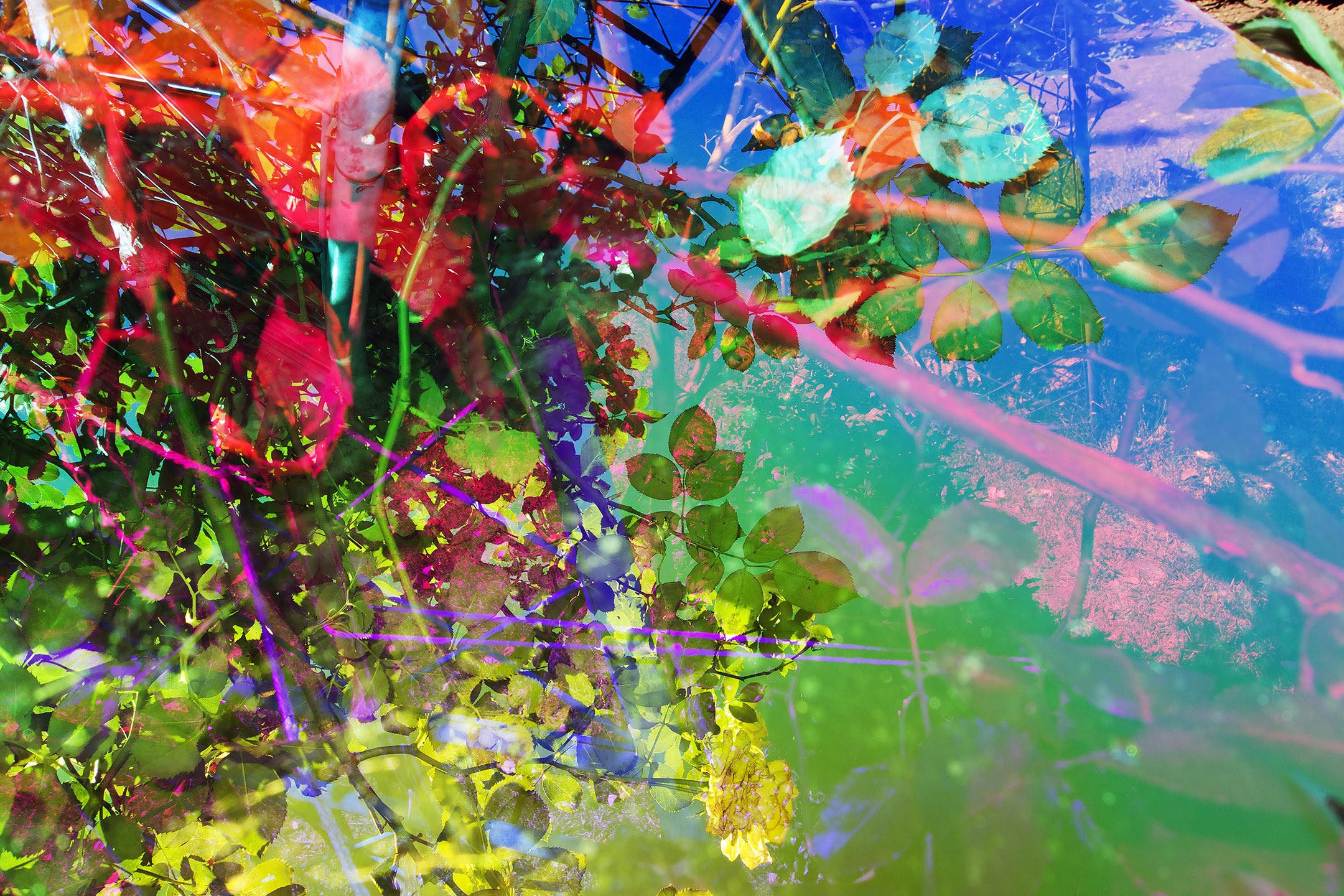 For Karine the camera is more than a way of documenting the world exactly as we see it,  it’s a lens to distort reality – the way we perceive the world usually – so that we can get to another more subconscious layer of our surroundings.

Why did you want to create work that is universally evocative? Your photos stir up memories and emotions despite being so abstract with no direct relationship to our individual past.
I don’t know if it at the beginning it was all that conscious. I think this is something I just respond to myself. Connectivity is very important in our lives. I didn’t really study art or photography, my background was in journalism, in someways a more down to earth area of study.

So when I picked up photography, I thought I would go more towards the documentarian approach and I would be a photojournalist, I was very idealistic about changing the world. But then as I started to practice, I was drawn to the more experimental aspects of the medium, and I pursued that path, rather than trying to portray the world as it is. I pursued my intuition and my interest in this more experimental approach, an approach more connected to emotions and self expression.

Why did you reject becoming a documentarian?
Well I studied journalism, maybe it’s my revenge from that, not being able to follow my true passions or desires! I think it is just more exciting, more fun to play around and be surprised sometimes with a more experimental approach. When I started to work on the pool series, I did everything you’re not supposed to do in photography, like shooting at noon against the sun, over exposing, then processing the film with the wrong chemicals to observe what the reactions are. I felt that the rules of photography are there to be broken.

There was something exhilarating about that, and somehow rewarding for me. And then to see the reaction – people react quite strongly to my work, they are rarely indifferent. Usually they respond in a very positive way, and so for me to know that this can offer them an escape from daily life or can connect them with history? It is rewarding, it makes the work full and complete. There’s participation in it, on a more personal level than just, “this is what happened when this bomb exploded in Paris.” 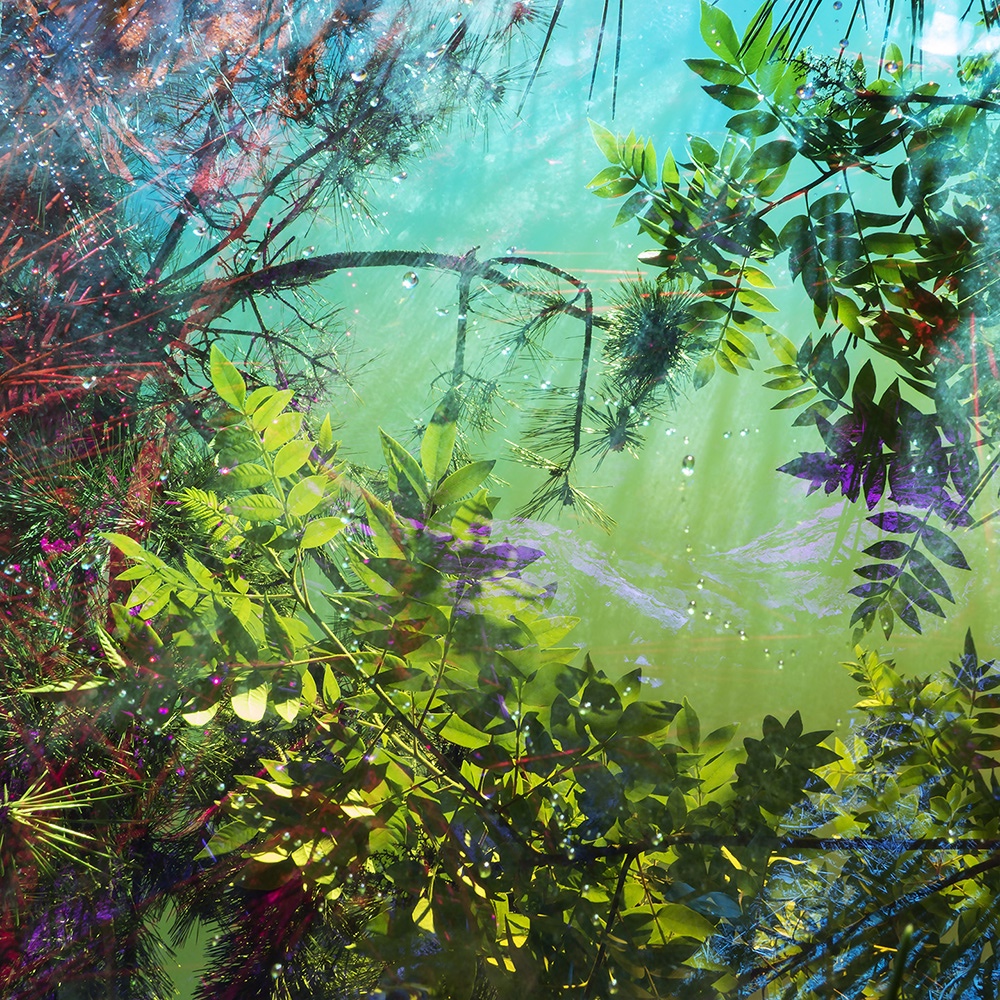 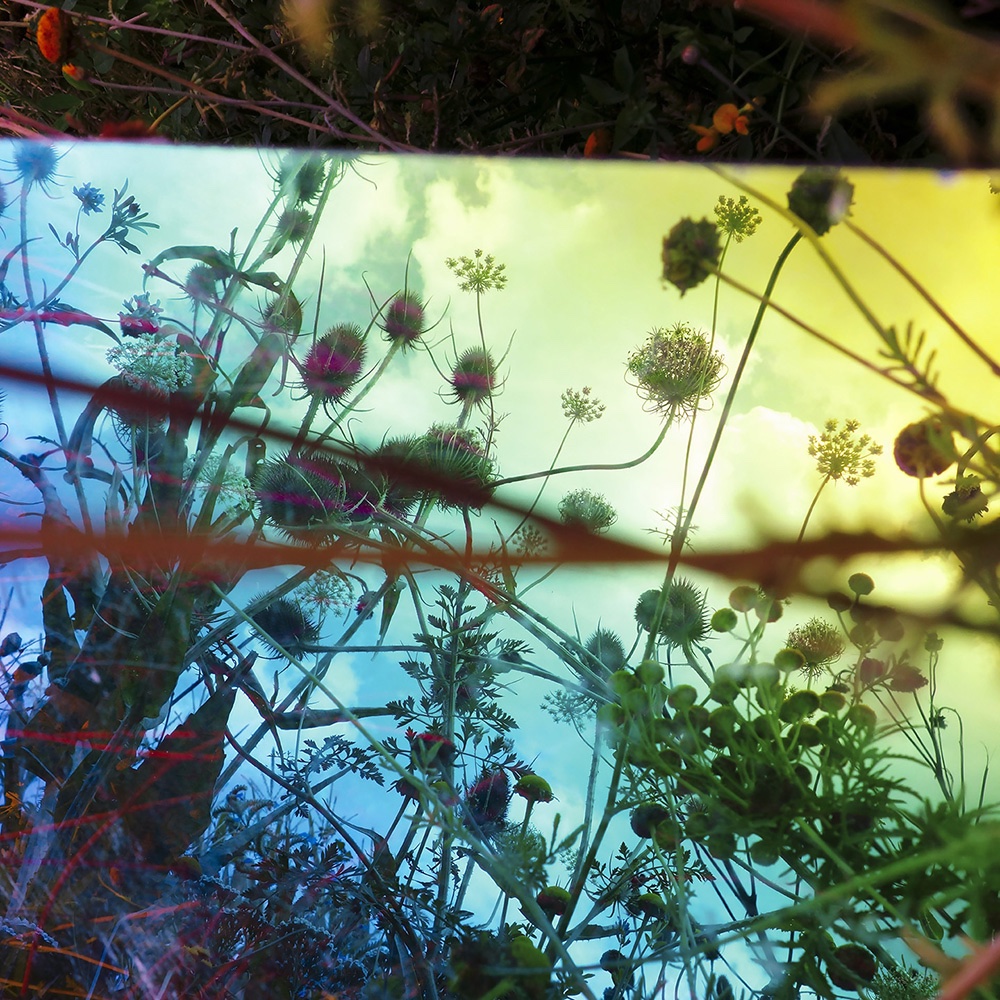 Much of your work has been focused on the swimming pool – what keeps drawing you to water?
Water is really my element, I’m an Aquarius! Growing up I spent so much time around water. My parents divorced when I was an early teen, and my dad moved away to the Caribbean. For years the only time we could see him in bursts, and we’d spend all our time by and in the water.

All of that had a very strong impact on me, him living on an island, the beaches and the sailing. My dad used to be a swimmer, he was part of the national team at some point when he was young, so he threw me in a swimming pool when I was 3 or 4 so that I would learn to swim. I just love to be by the sea even more than swimming pools.

And how did the project itself begin?
It kind of started as an accident. I was in Barcelona and looking for an excuse to be by the water, and I heard about the neighbourhood with an outdoor swimming pool by the sea. I went there with my Rolleiflex, and I was so taken by this improvised ballet going on around the pool, in and out of the pool too. People had repetitive gestures and expressions reacting to the coldness of the water, the splashing, everything.

I started to look at these scenes from above into my Rolleiflex and then by isolating those scenes, I saw movement.

It’s funny because I took photographs, but there was a very cinematic feeling about it. Then I started to photograph those repetitive gestures of people, at first from the same angle of the ladder but of different people: an old man, a little girl… and that’s how it really started. It was by chance, but I just had to continue! I love to be by pools and by the sea so it’s a good excuse.

Somehow I almost think water is a metaphor for the medium of photography itself, as it reveals at the same time as it conceals. Those two way mirrors and the surface of the water, depending on the angle of the light hitting it, you either see through or you don’t. 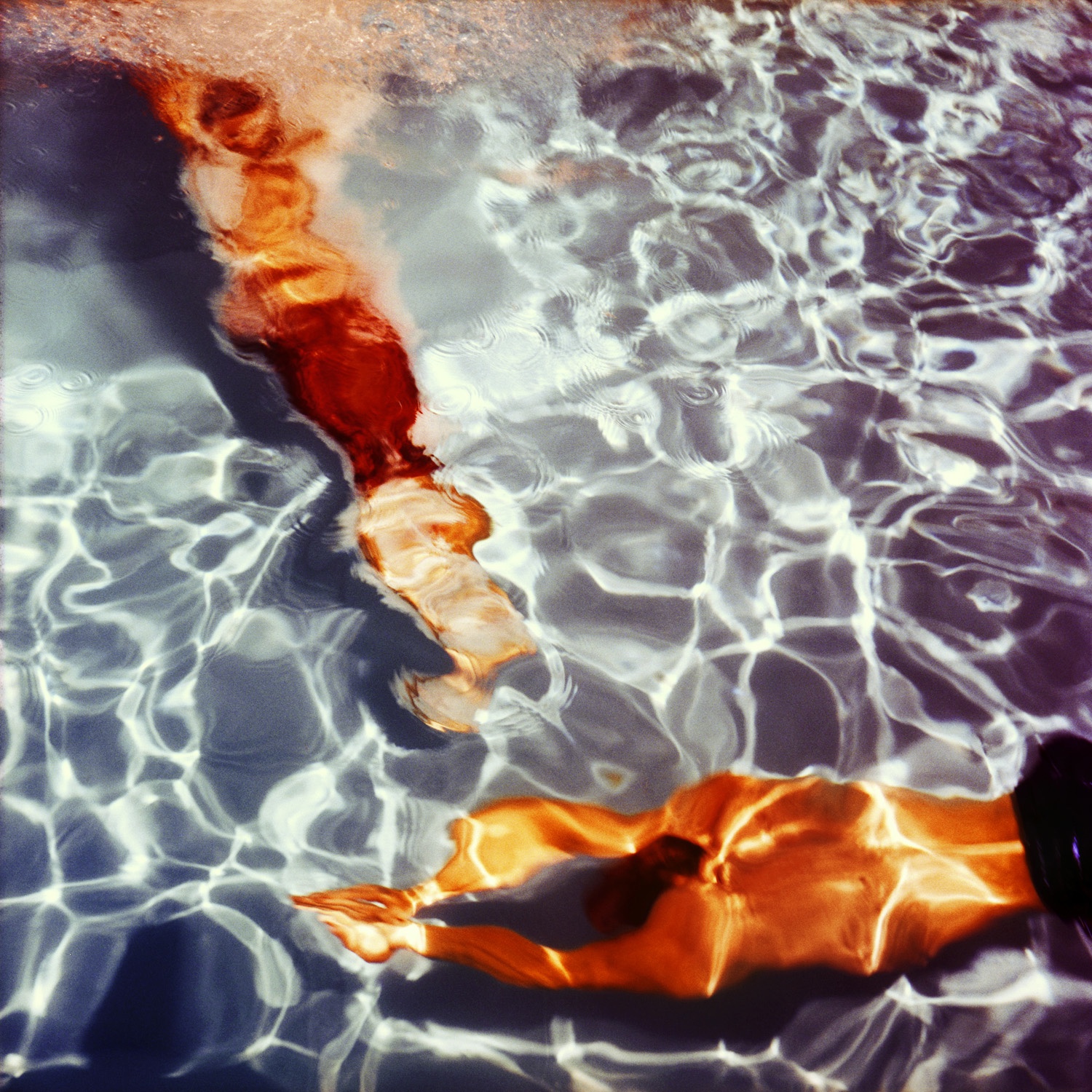 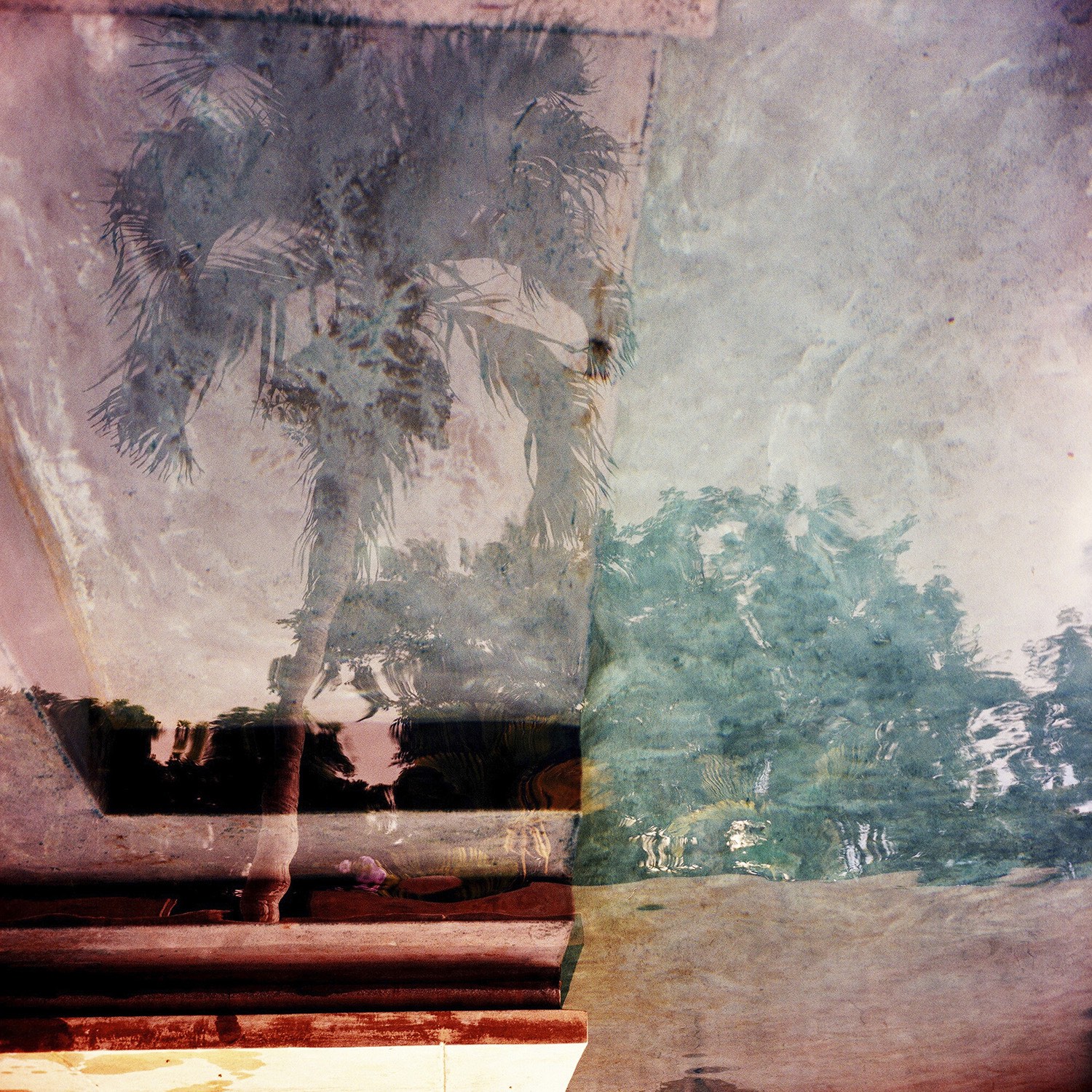 In Heteroptopia you place sheets of glass and mirrors in the composition, employing skewed perspectives and extreme crops to create works that look like unsettling movie stills or extra-terrestrial landscapes. I’m interested mostly in the name…
Well I liked the fact that very few people would know what that means. And I actually even have someone who asked me once if it had a link to being heterosexual, which I thought was interesting because I’m homosexual. Somehow I thought it was interesting people were immediately thinking of this notion of identity, of sexual identity, because there is some kind of connection of identity in those strange landscapes.

They are definitely not normative landscapes.. but the etymology of it, heterotopia it’s “other” and topos is “place/space”, so I didn’t first say that I was going to do a project about heterotopia, but when I started to work on the project, I was looking for a title, and I wasn’t quite sure.

Then I read this essay by Michel Foucault, and he wrote about the notion of utopias, and I thought those landscapes, those worlds I create – they are kind of utopias because they don’t really exist. But at the same time they do exist because I create them out of a reality that I transform.

So in this essay he was speaking about – he invented this term “heterotopia” to describe certain forms of topias that are actually realised in the real world, as opposed to utopias which are fictions, they never really exist.

Linkedin
RELATED ARTICLES
OTHER ARTICLES
A new series of photos by Johny Pitts shines a light on communities and subcultures that have all too often been overlooked.
Last week, Tower Hamlets council removed its nudity-restricting licensing conditions in a huge win for London’s kink community.
In the latest instalment of Photographers in Conversation, the creator talks portraiture, platforms and taking inspiration from Little Simz.
Danny Burrows discusses his new series of images documenting an pacifist anabaptist community who lead an alternative way of life.
An abortion storyteller talks about the termination of her pregnancy and the harassment she’s received for sharing her story online.
One year on from the fall of Afghanistan to the Taliban, Tiara Ataii speaks to those who have been forced to make the treacherous journey to Europe for safety, and the barriers and horrors they have faced.