Art & Culture / Photography / Ukraine in flux: A photographer digs beneath the surface 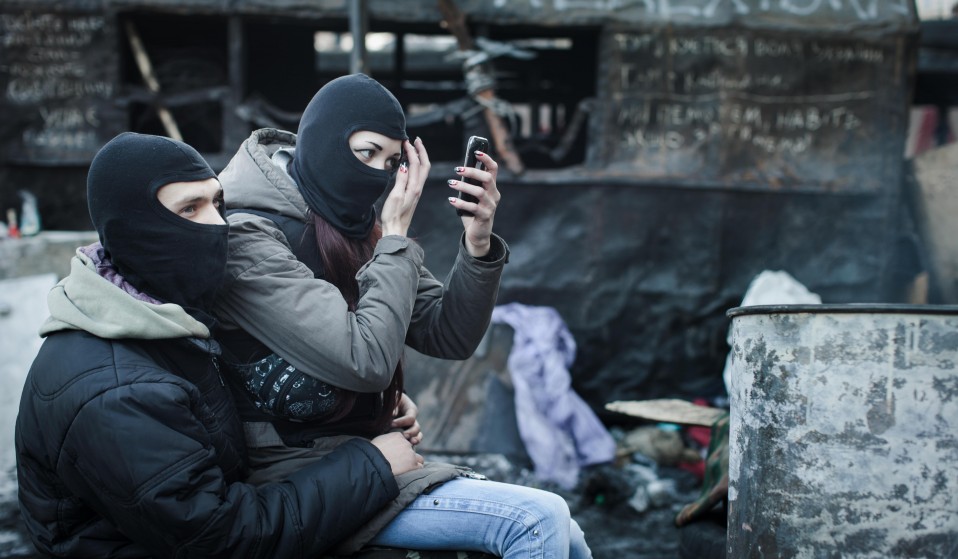 As Ukraine marks 25 years of independence against a backdrop of unrest, photographer Adam Hinton reflects on a country still coming to terms with its identity.

In February 2014, Kiev’s Independence Square erupted: protesters and police clashed in scenes described as the largest pro-European rally in history.

The Ukrainian government had abandoned a proposed agreement with the EU only to seek closer economic relations with Russia, triggering revolt from its citizens.

British photographer Adam Hinton had seen this moment coming and made sure he was there to capture it.

When he arrived in Kiev, the road to its presidential palace was already in ruins. Rubble littered the snow. A layer of black dust covered everything. 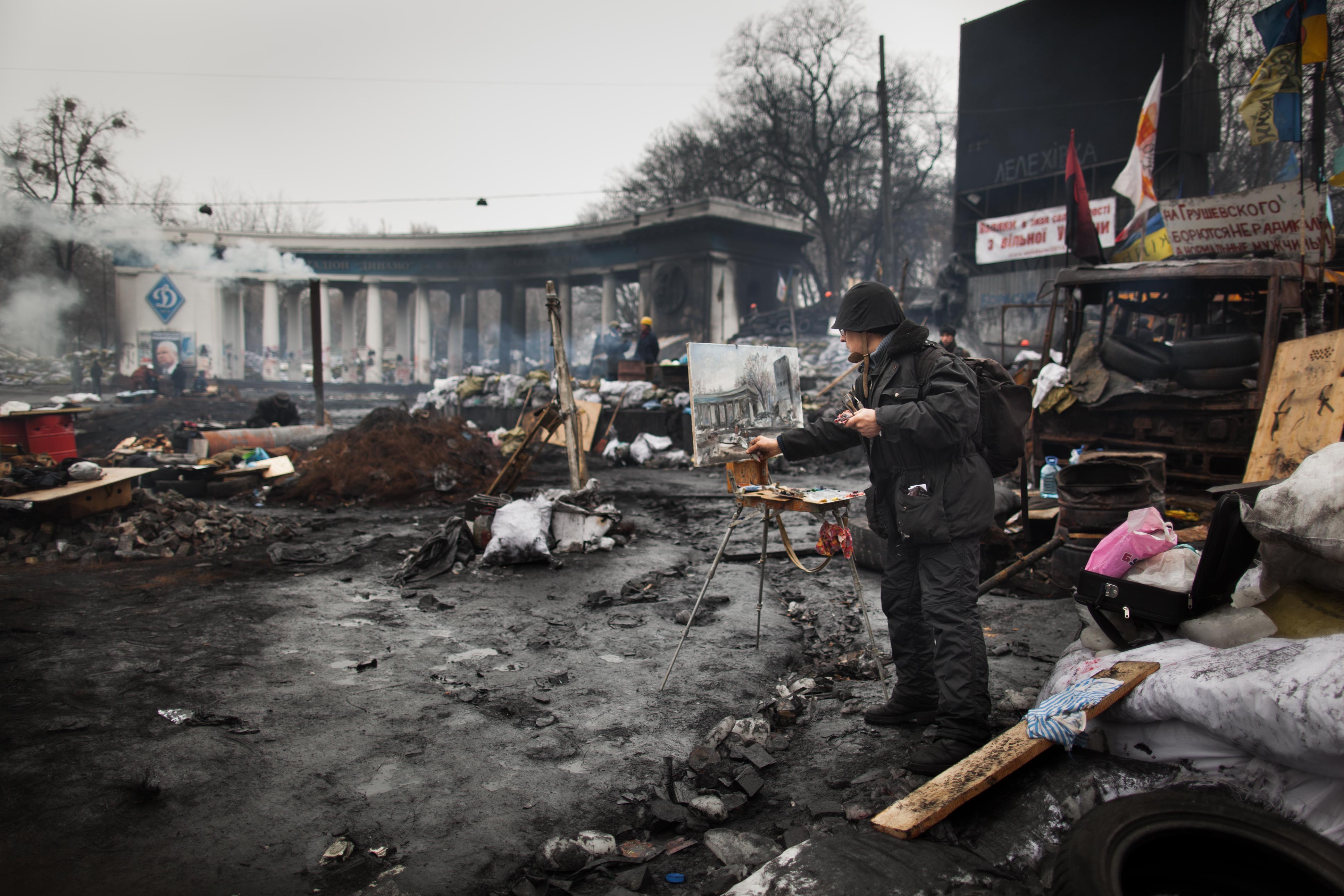 The tones and colours were reminiscent of those Hinton had found on his first visit to the Ukraine – four months after the country had declared independence from the former Soviet Union in 1991.

He’d been absorbed by Soviet politics at school and wanted to see how the end of communism would affect the proletariat – especially the miners – in the Donbass region, now known as Ukraine’s rustbelt.

To do that, he stayed with a mining family in Donetsk and followed their lives over four years. The experience would shape Hinton’s approach to documentary photography: embedding himself with people living on the edge politically, economically or socially. 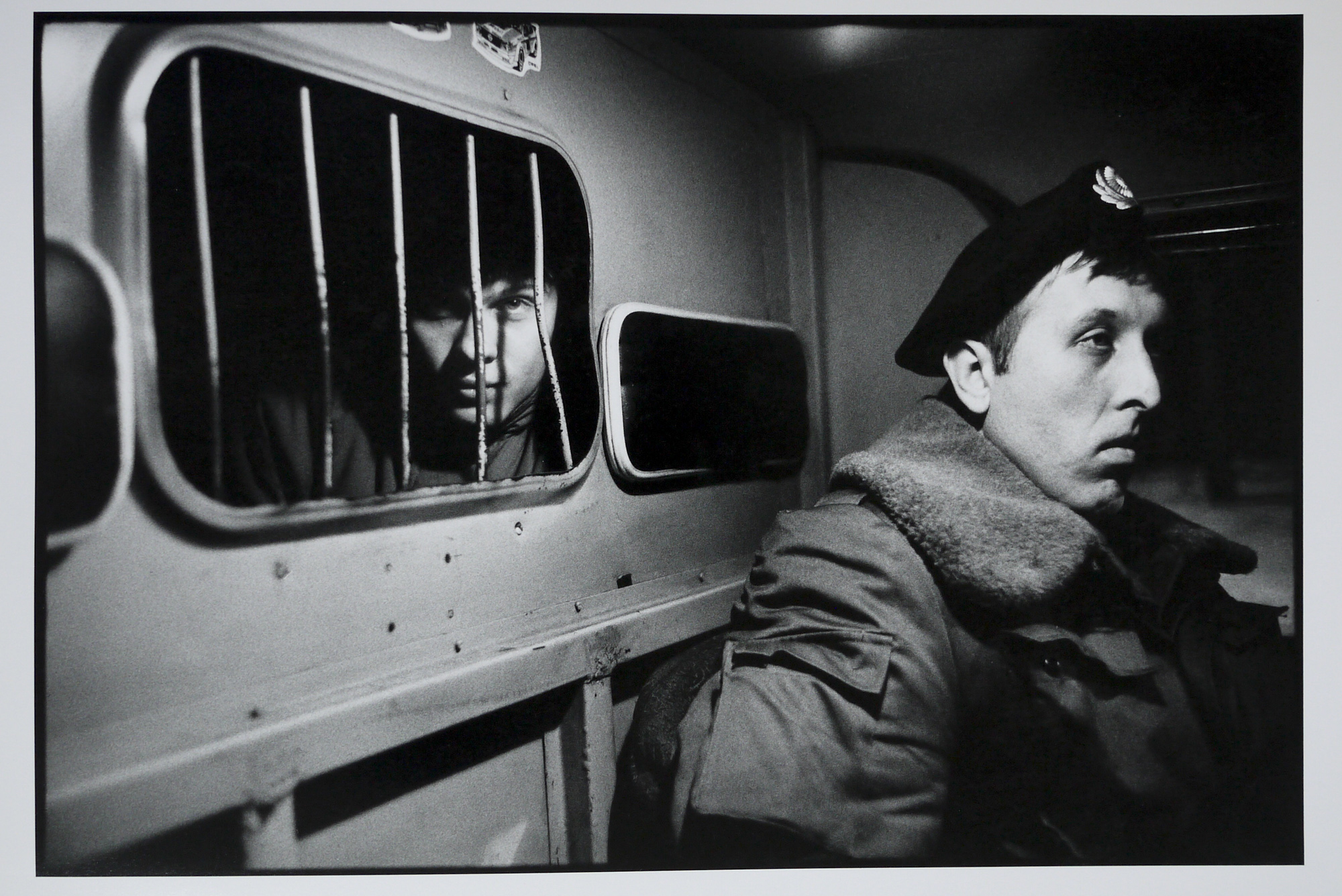 Today Hinton earns a living as a commercial photographer, shooting for sports brands like Nike and Adidas as well as various charities.

But he still spends his spare time on self-funded photo projects in some of the most unsettled cross-sections of society, from prisons in El Salvador to slums in Manila.

As Ukraine prepares to mark 25 years of independence against a backdrop of rising unrest – with its president anticipating heightened conflict with Russia and Russia-backed separatists – Hinton shares his experiences of a country still in flux.

Ukraine was at a crossroads when you first visited: right between the end of communism and the introduction of capitalism. What did the country feel like on the cusp of independence?
Over the years I was there, it remained very Soviet. It seemed like the slowest of the states to start reforming itself. Independent businesses were just starting up and people were still trying to figure out how to run them. 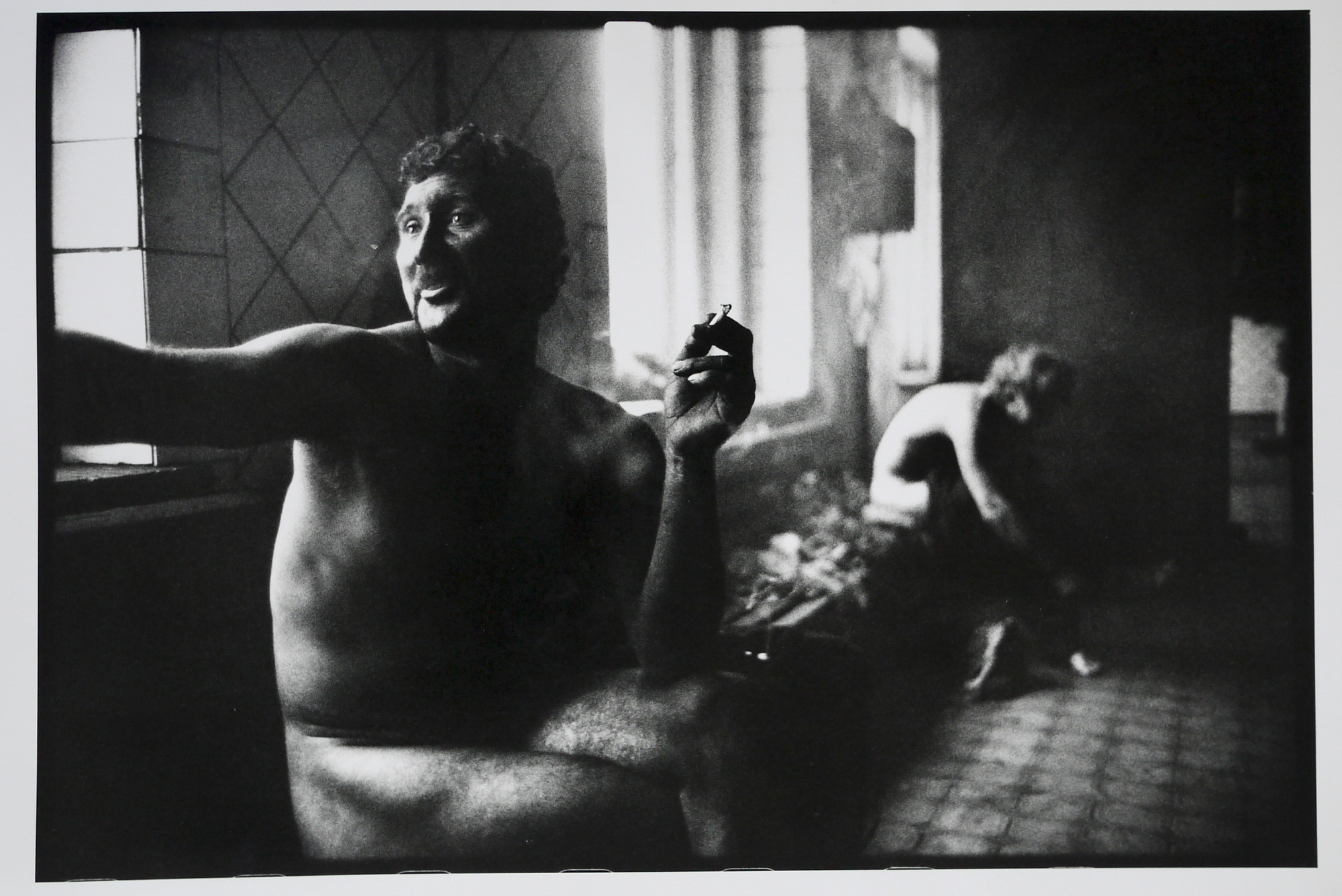 A miner in the changing rooms after a shift at a coal mine in Donbass, December 1991.

Demitri, who married the daughter of the family I stayed with, had given up coal mining to become an entrepreneur. There was almost a naivety to that.

Was there a sense of disillusionment with the capitalist vision?
There was a wariness about it. The person I spent the most time with was big into independence and he was quite positive – though he did think they’d all be driving around in Mercedes. In some respects, that’s what was sold to them. ‘We’ll become like Germany.’

I said, ‘I’m not sure if it’s going to happen that quickly for you’ – thinking [privately] that it probably wasn’t going to happen at all, just knowing how international politics and economics works.

Most of the West wanted a pool of cheap labour and weren’t really that bothered about stuff that was going on there. It was more of an economic opportunity. 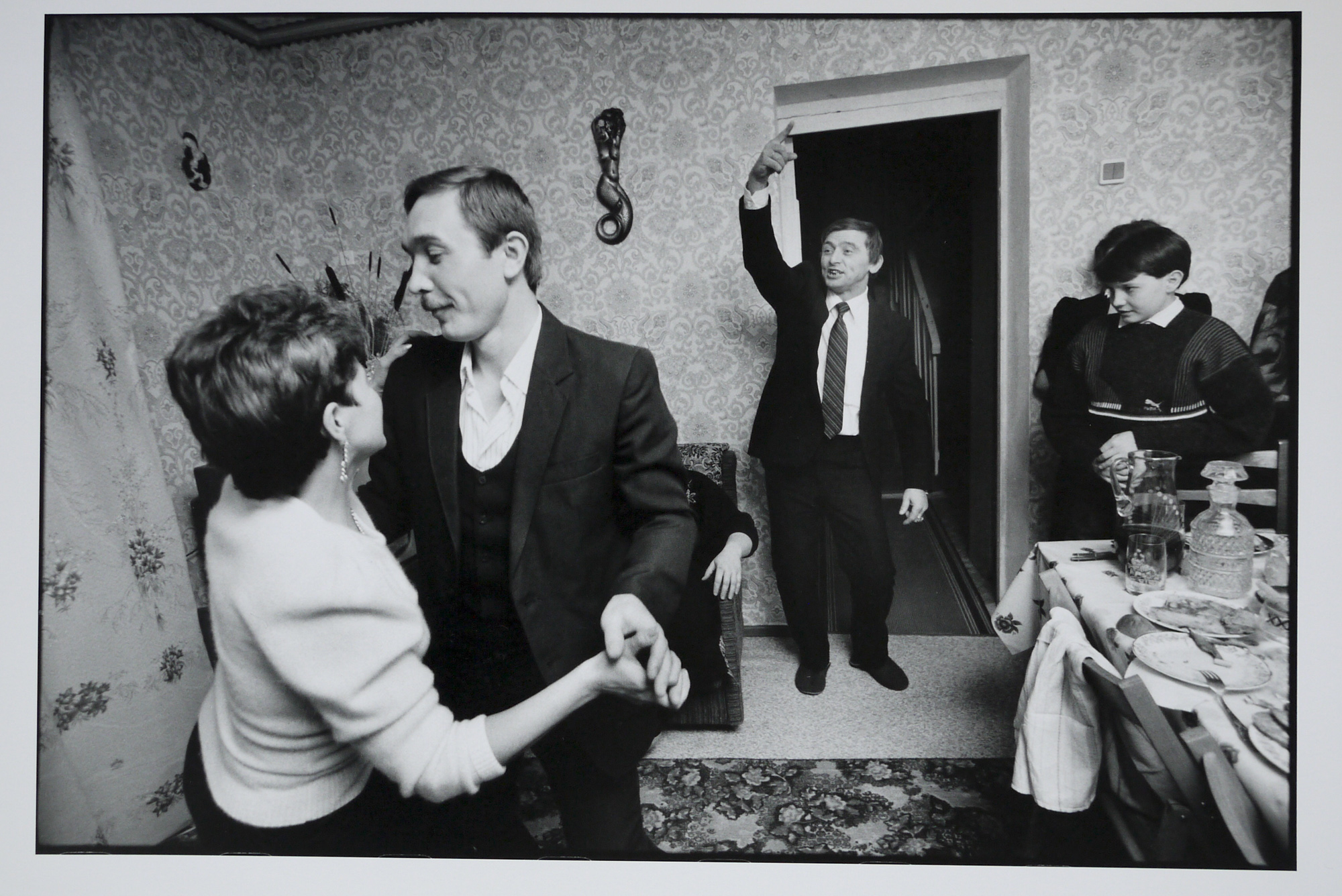 You developed a connection while staying with this one family, the Slaktars, which lasted for years. What stories stick out from that time?
The family were so open and friendly. I remember drinking vodka all night until I passed out, then being woken up as they were going to work at six in the morning. I was still there in all my clothes! And off we went to the coal mine.

They just gave me a helmet and a gas mask, no questions asked. They even let me use my flash-gun down there [laughs] which wasn’t the safest thing.

I would go back for different occasions, like Irina and Demitri’s wedding. The party went on for about three days. I’d go to bed, get back up, and they’d still be drinking – big stains under the armpits. Some of them were such a mess at the end. Silly little things like that have stuck with me. 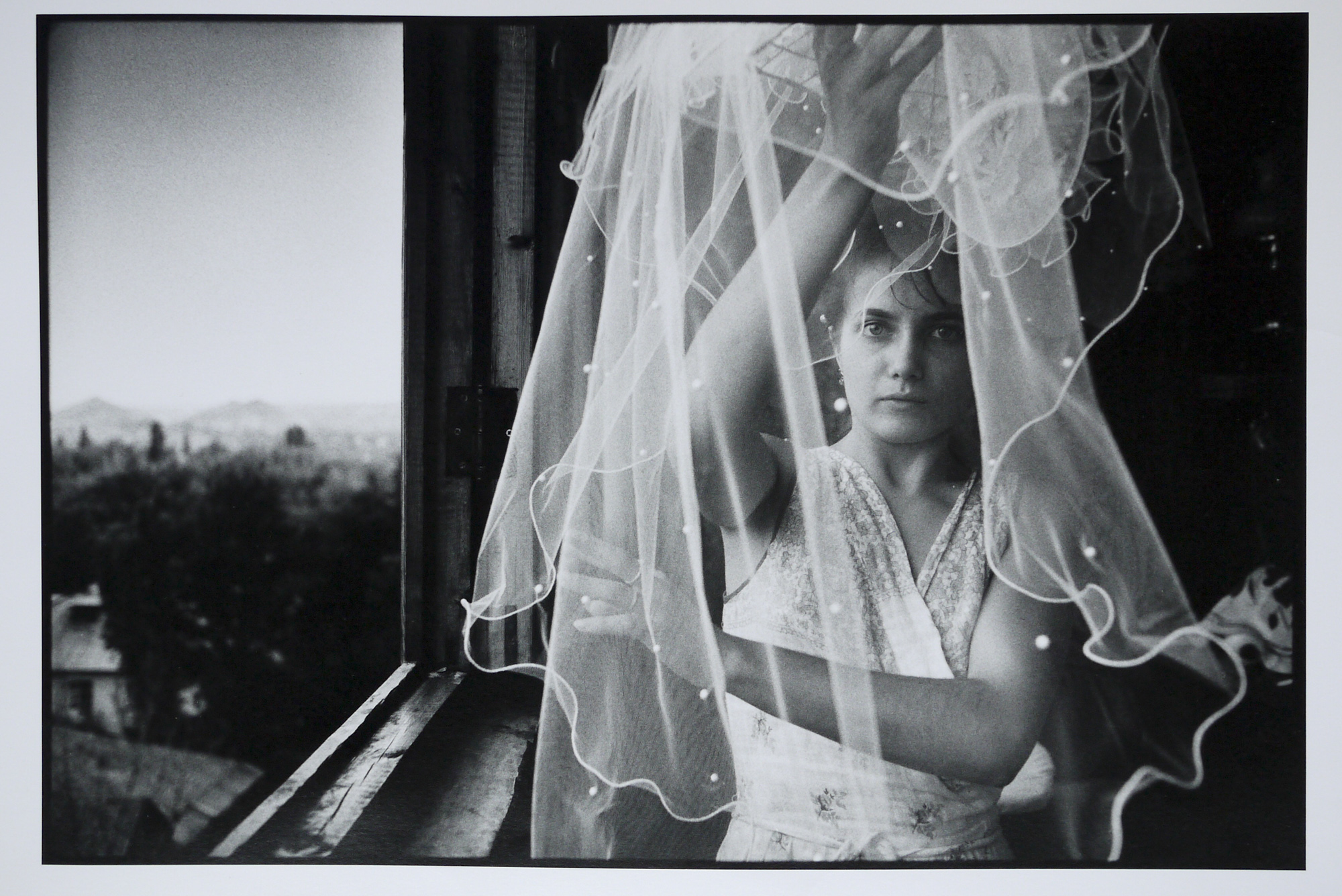 Irina Slakar preparing her veil on her wedding day. She is marrying Demitri, a former miner at the Socialist Donbass coal mine, Donetsk, June 1993.

You obviously have an ability to disarm people and get access that others wouldn’t. Has anyone ever said what it is about you that has that effect on people?
People are comfortable with me straight away. I always wonder what my fascination is with the family [unit]. I had a bit of a broken family myself. There were issues – parents in prison and all that sort of stuff – and sometimes I wonder if I’m looking for something I didn’t have or if it makes me able to go places without feeling intimidated.

The nicest thing about being a photographer is seeing a side of life that you wouldn’t be able to otherwise. It lets you get under the skin of a place. Spending time with people you wouldn’t normally spend time with is quite a privilege. 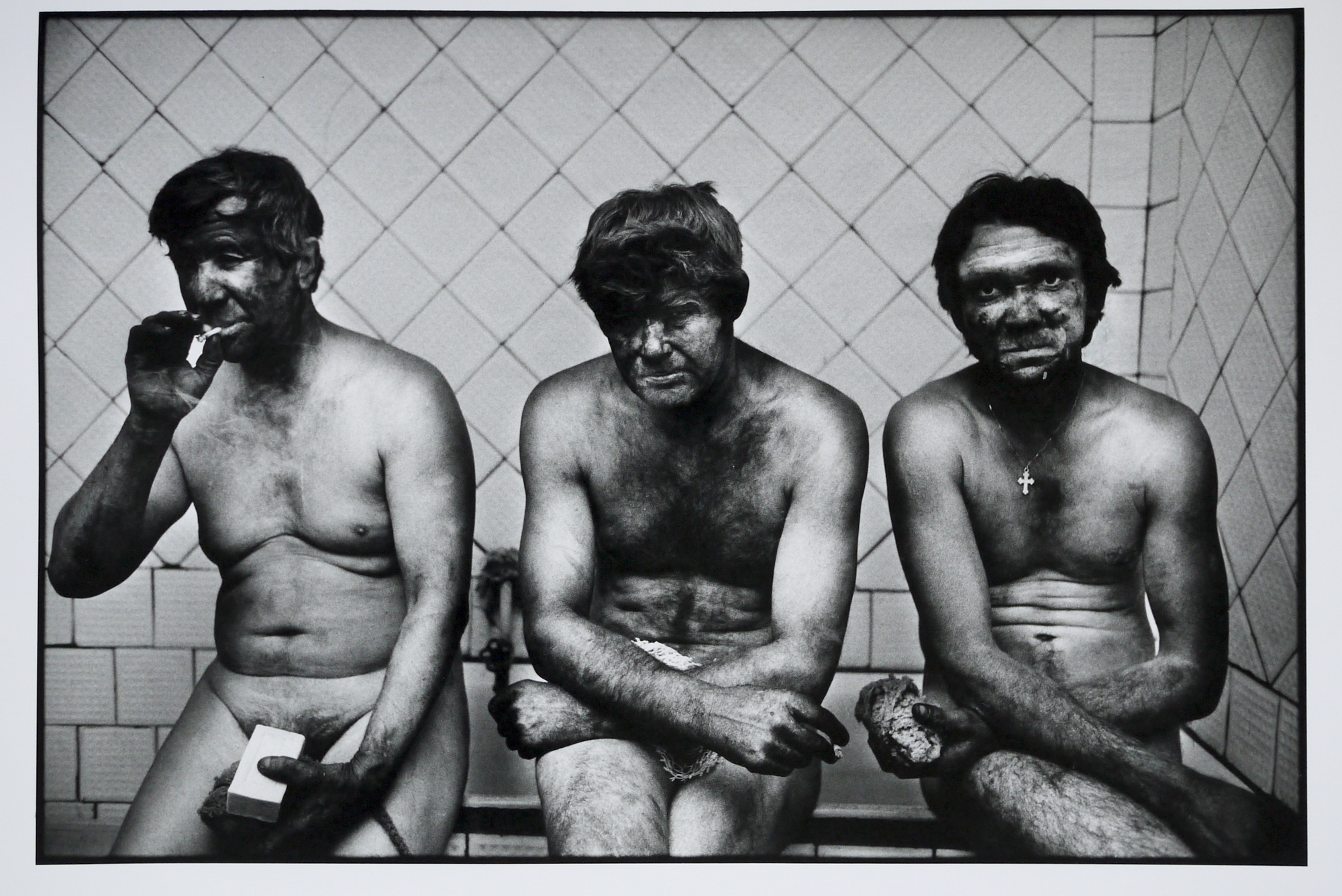 Miners changing after a shift at the Socialist Donbass coal mine, December 1991.

What drew you back to Ukraine in 2014?
I’d followed the issues going on there and wanted to see the change of regime first-hand. You read it about here [in the UK] and there’s an element of propaganda in how the BBC and others portray it.

I’m quite political – I’m involved in Labour campaigns, supporting Corbyn and so on – and I’ve got my own take on how the situation evolved, which I don’t really talk about. You can’t express that photographically. 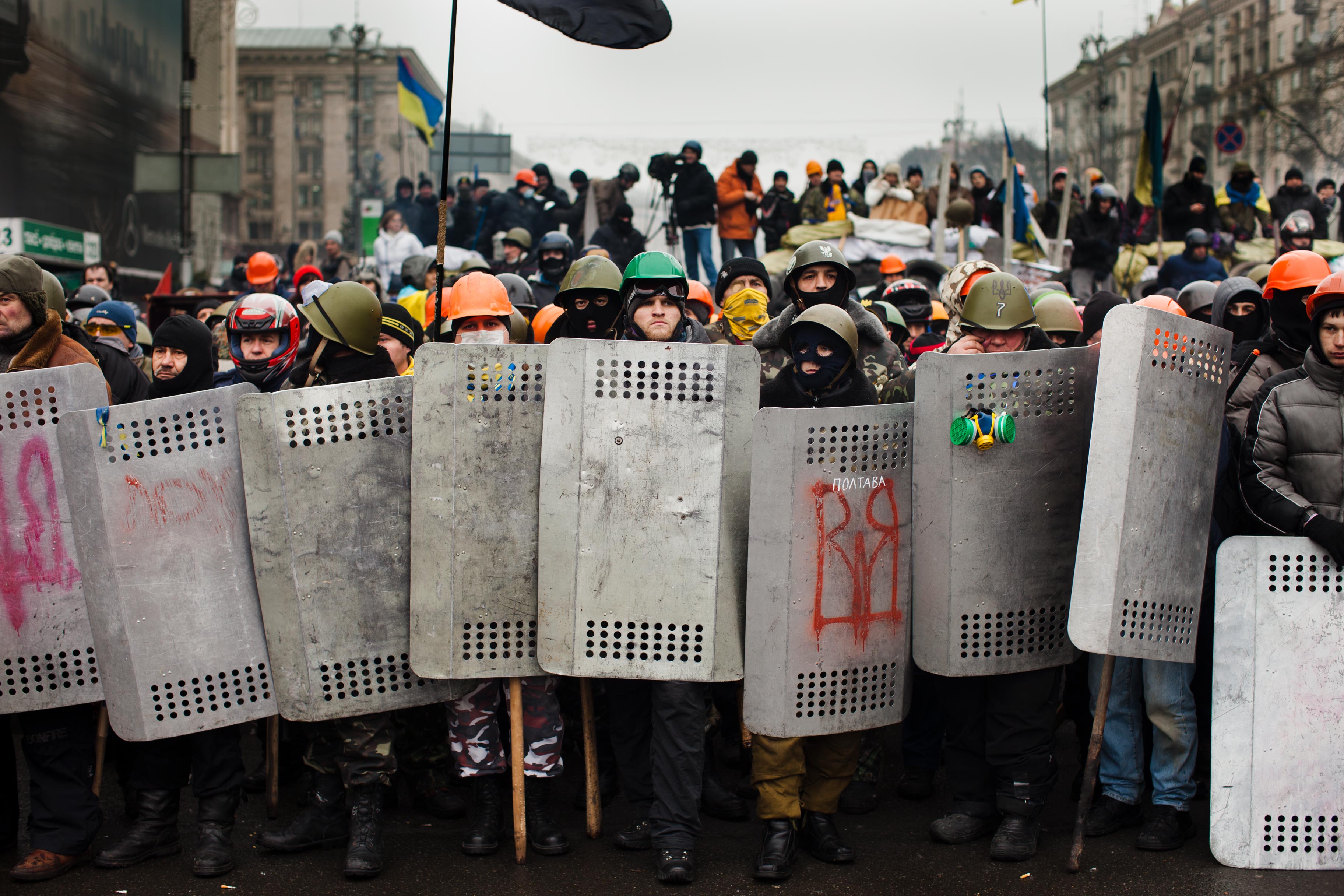 And what is your take on it?
I think they spent several years negotiating with the EU which, after its success in Greece, basically wanted Ukraine to become a bit of a basket-case as well.

The EU was demanding [Ukraine] cut pensions by something like a quarter, to sack a third of the civil service, to shift from subsidies for the general population to tax breaks and grants for corporations and wealthy people.

That was a last-minute demand and the leadership didn’t want to do that. Along came the Russians who said, ‘We’ll give you the [same amount of money] – all you have to do is sign a trade pact with us. No strings attached.’ And that isn’t discussed. 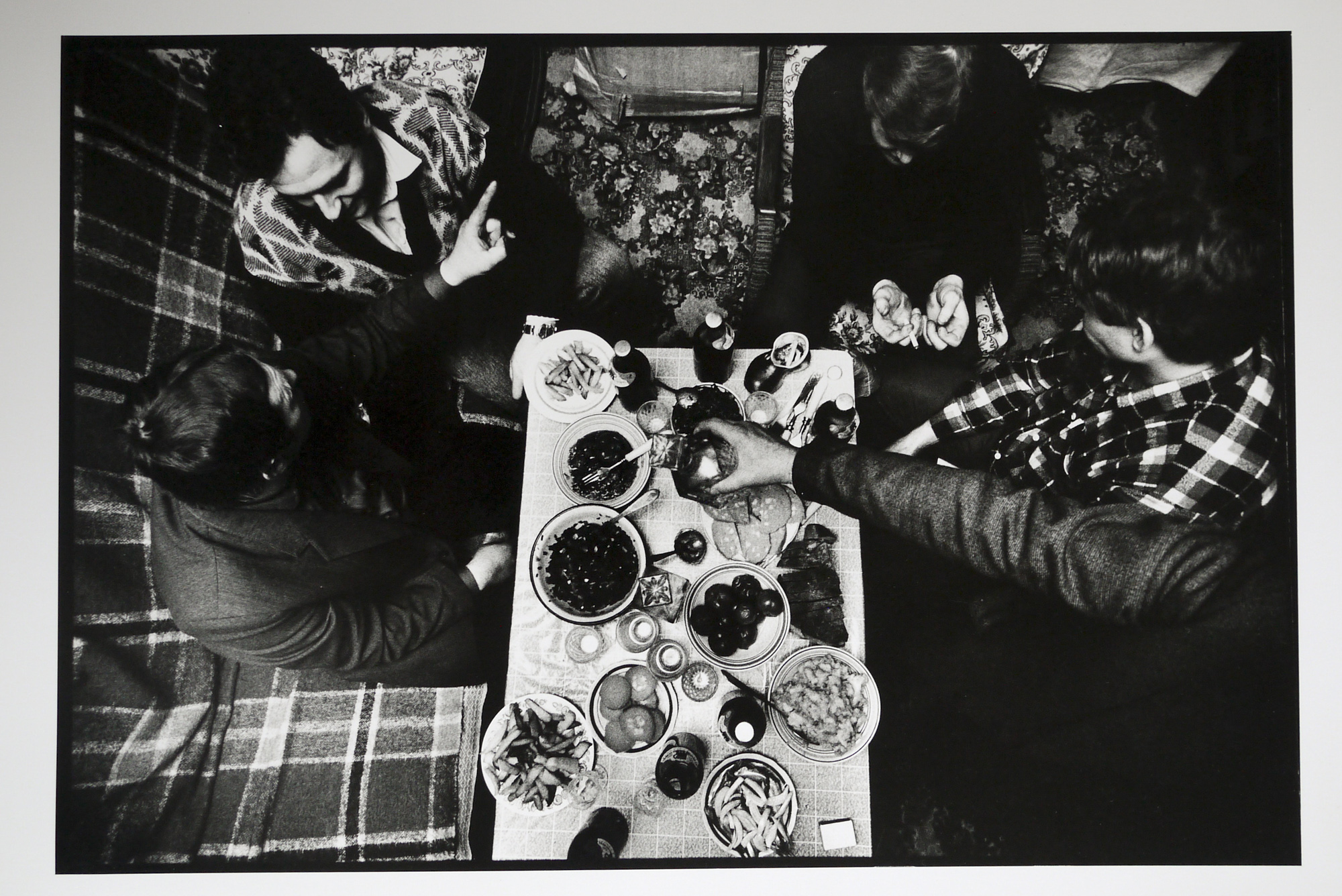 In the time you had been away, how much had changed and how much had stayed the same?
If you go to some other Eastern European countries like Poland or Hungary, they’ve changed quite a bit. They’ve moved more towards the standard of the Western model.

Ukraine still feels, to me, like it’s about halfway there. There aren’t the goods or services you would get in the West or even the former Eastern Bloc.

The odd thing is that they wanted to end the oligarchs… and yet the president who took over [Petro Poroshenko] is one of the richest men in Ukraine.

That power still exists there and a lot of people feel disenfranchised. I noticed a lot of ultra far-right people at the barricades, happily sporting swastikas and giving Nazi salutes. 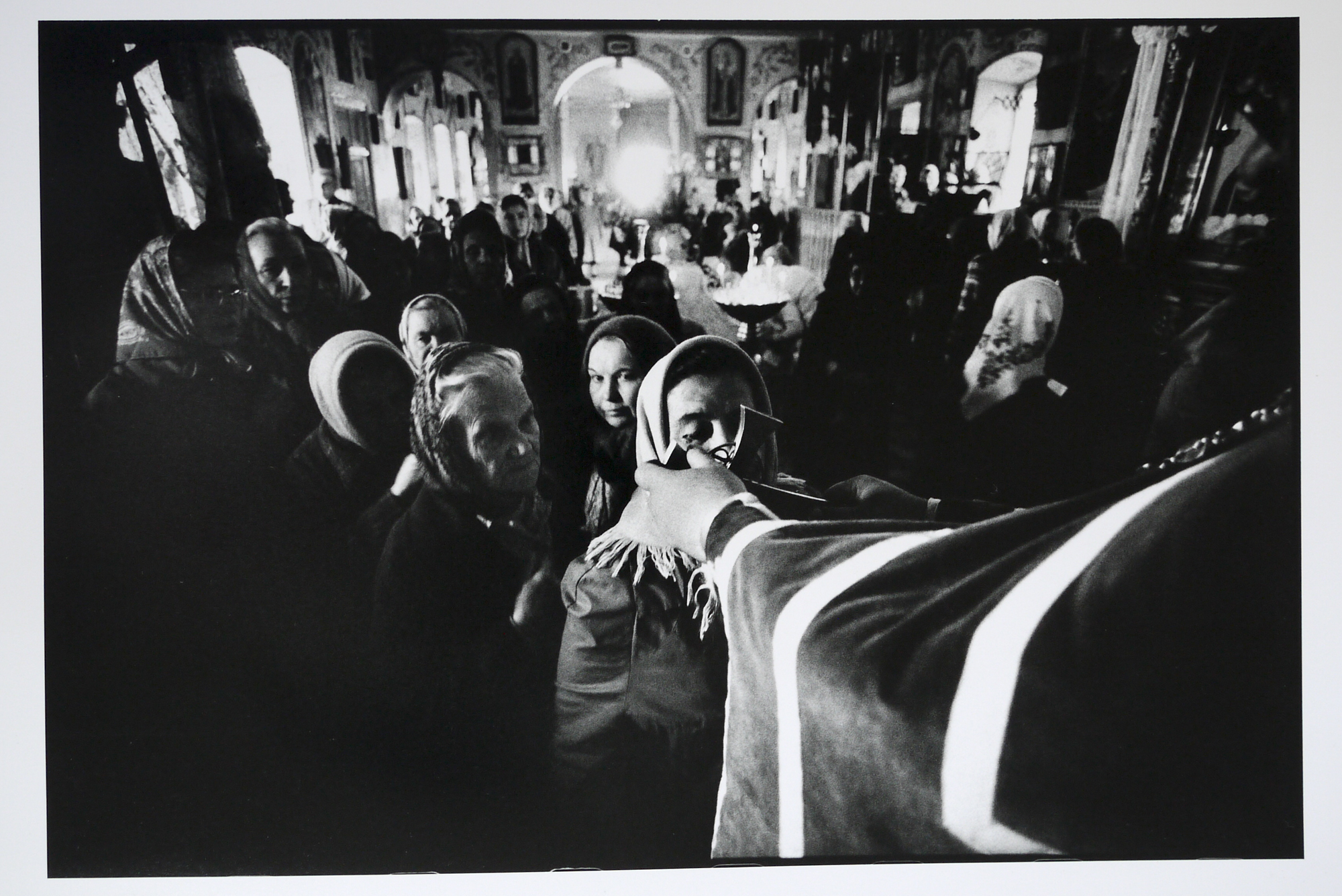 How do you see things panning out for Ukraine?
I think it’ll bump along like it’s always done, going from one fiscal crisis to another and constantly needing bailouts – a bit like Greece. Bailouts are just used to keep people, and whole places, in line. You’re trapped.

I think oligarchs will remain in power for quite a long time unless there’s a proper movement from the left that can get rid of them but that doesn’t seem likely. I don’t think there’s a strong leftist movement there at the moment. 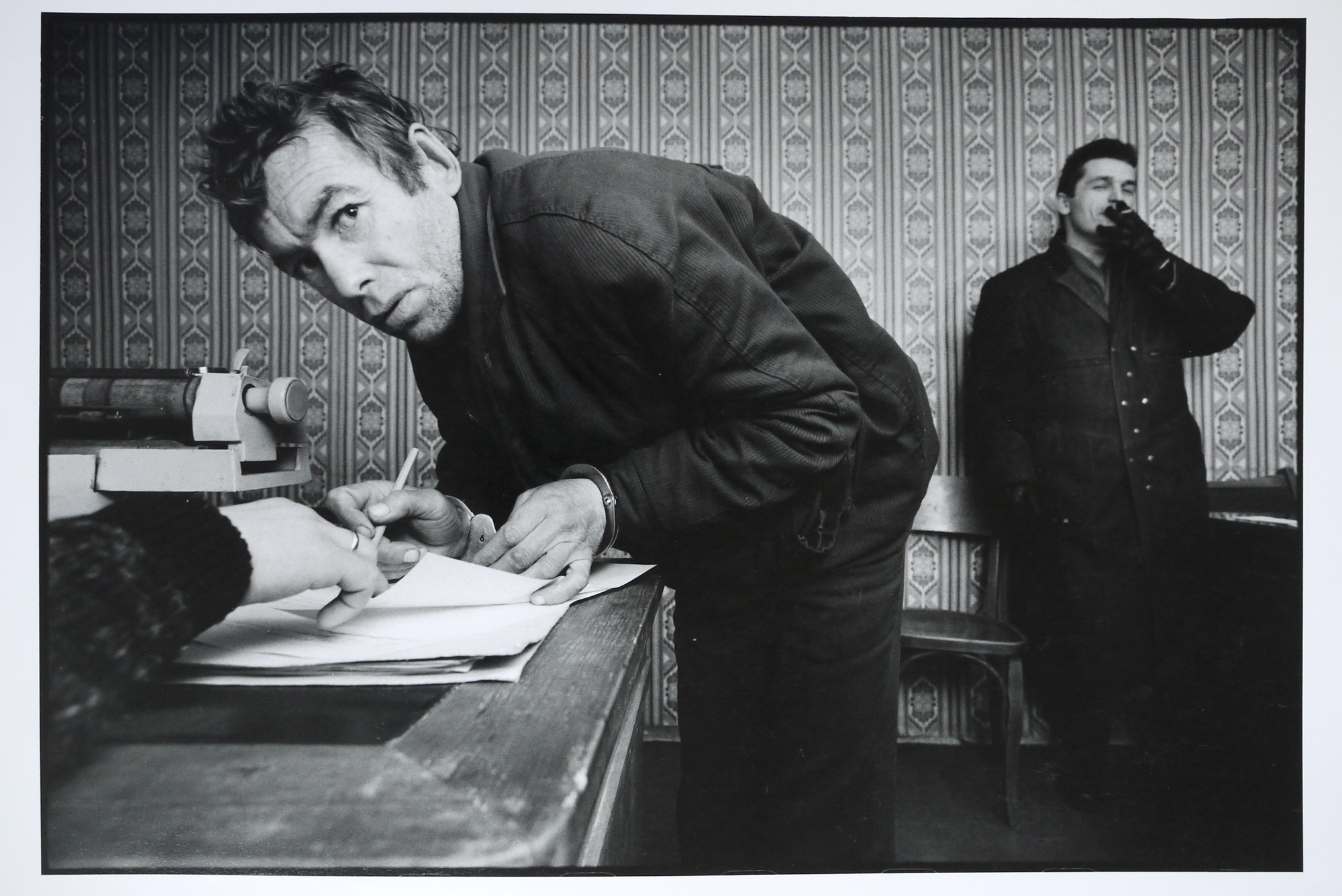 A petty thief signing his confession at the local police station. The arresting officer stands in the background, December 1992.

During your 2014 visit to Kiev, you returned to the UK once things calmed down only to head straight back over there when it kicked off again. No one was paying or even asking you to do this, so what was your thought process there?
It had calmed down but I could also see how part of the ultra nationalists had fermented that night when everything exploded. A photographer who I’d met there was freaking out. Someone stood next to him had their head blown off.

When I phoned him, he was getting on the first plane to Germany because he felt it was too dangerous. But as soon as the presidential palace had been abandoned and the national guard had gone, I knew instinctively that it was perfectly safe to go there.

The old regime had left and they weren’t coming back. I can measure danger. I wouldn’t go to places like Syria where it’s totally unpredictable.

I enquired about going back to Donetsk around six months ago but it seemed quite difficult and I don’t know what I would have been able to achieve.

There’s a big risk, not of being kidnapped, but of getting your equipment stolen or being taken by someone and having to pay them lots of money to get out. That’s what journalists in Kiev were telling me. 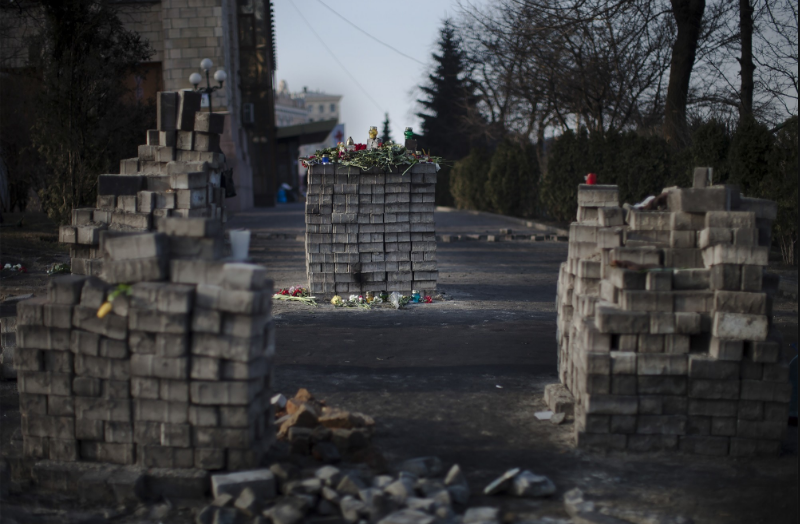 Piles of bricks to memorialise where protesters had been shot. Kiev, February 2014.

Has that happened to you before?
The first day I was in Caracas, a 15-year-old kid came up to me with a gun and wanted my cameras. Then some guys jumped off a couple of motorbikes and started taking me apart, basically. Not hurting me – I just stood there. I didn’t realise at the time but my producer said I had a gun at the back of my head.

At one point the guy in front of me was fumbling as he tried to take my wedding ring off, so for a second I thought I could take his gun. Of course, I didn’t know about the guy behind me who would have just blown my head off. 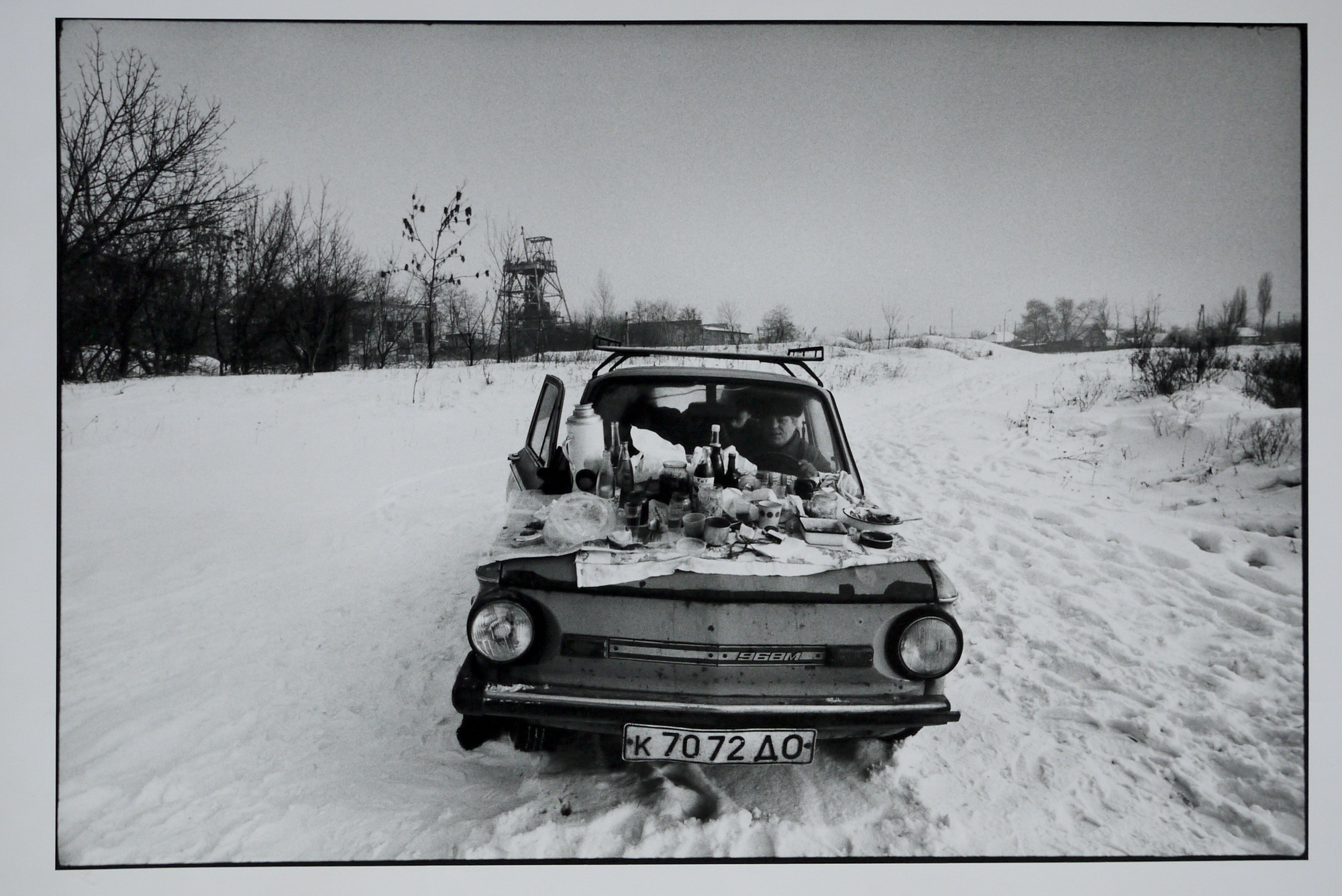 You’ve said that there’s no point in going somewhere as a photographer unless you’ve got something to say. What did you want to express with Ukraine?
To show that people can take up arms and go to the barricades. I went to Cairo about a year before just to show a popular uprising – made up of ordinary people who can take to the streets and forcefully change governments through a collective will.

The problem is that, ultimately, what that produces is much more complicated. Look at what happened in Cairo: the military junta is back in power and a democratic government has been thrown out. So, really, you’ve got the same political class governing Ukraine.

People can try to change things but it needs more than just marching on the streets. It’s a long-term political engagement.

There’s only so much you can say through photography. I just wanted to show a portrait of how ordinary people are affected and how they’re involved in it.

Linkedin
RELATED ARTICLES
OTHER ARTICLES
Theo McInnes’s photos of the annual event provide an intriguing snapshot of contemporary Britain.
Tristan O’Neill’s shots of dancers caught in moments of reverie at the height of rave’s golden age are a testament to the UK’s legendary club culture.
Photographer Becky Tyrell went down to the fading banger and stock raceway to meet a community desperate to keep it alive.
The action took place in response to the 200 asylum-seeking children who were placed in hotels run by the Home Office who have gone missing.
Since 2007, Gideon Mendel has made 20 trips to document floods in 13 countries. The result is an alarming record of what has already been lost to the climate emergency.
After blocking the Scottish government’s gender recognition reform bill, Westminster is now devising further changes to the law to make it harder for trans people to self-identify.