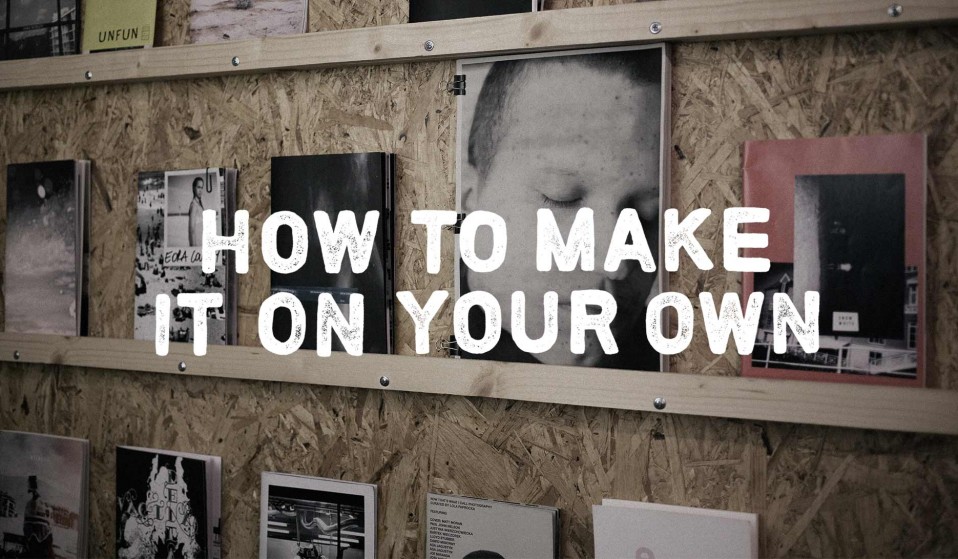 Tired of rejection in an elitist industry, photographer Ken Flaherty decided to build an art space in his living room.

Tired of rejection in an elitist industry, photographer Ken Flaherty decided to build an art space in his living room.

Between the market stalls and neighbourhood shops of Ridley Road, Hackney – hidden among bellowing locals, fish heads, saris and jewels – is the unassuming entrance to a gallery called Doomed: a sunken art space for students, community collectives and emerging photographers to showcase their work.

“I couldn’t find any photography galleries that weren’t really polished,” says Doomed’s founder Ken Flaherty, a ’70s punk with a flamboyant silver undercut. “There were no places for emerging photographers to show their work.”

Taking inspiration from ’80s art fixture Maureen Paley, who set up a gallery in her own Bethnal Green living room, Doomed was born (among the detritus of a tennis table, an old motorbike and a jukebox). “I was sitting here surrounded by all this stuff, and I thought, ‘Hold on, I’ve been in galleries much, much smaller than this,’” says Ken. “So we got some money together, built some walls, and put on our first show.” That was 2011. Fast forward to today, and Doomed is clocking up over forty different exhibits a year. 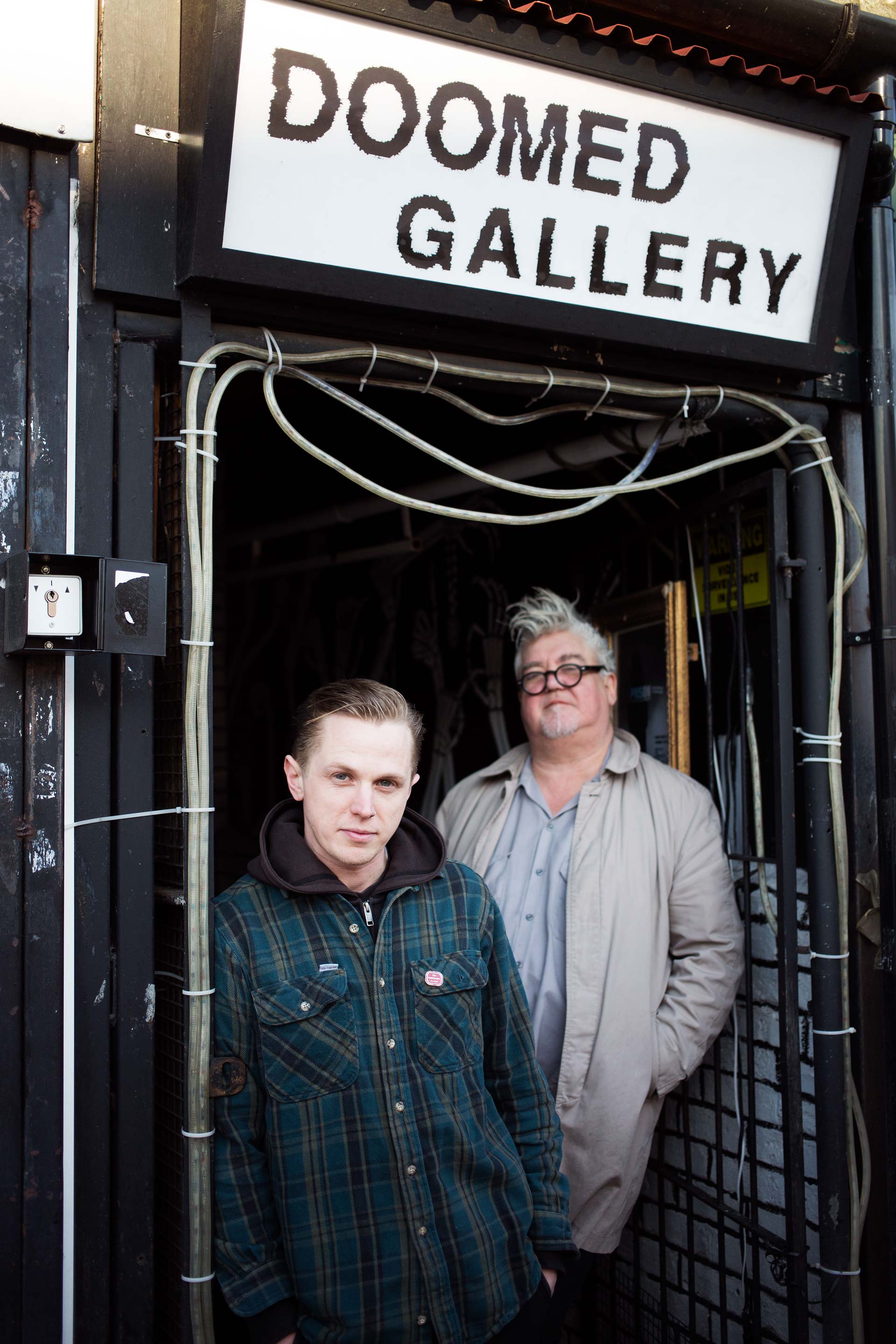 Left to right, Matt Martin and Ken Flaherty outside Doomed

The venue itself is as DIY as it gets: a ten by four metre floor space painted Dulux white; two makeshift walls for picture exhibits; and a small residential garden outback. A bar sits in the corner of the venue, its stools nicely distressed, while acerbic homemade stickers plaster the fridge.

The anarchic, freewheeling looseness is very much intentional. “I don’t massively enjoy the gallery experience,” Ken confesses. “I don’t think they’re much fun. So we try and make it enjoyable – not so self-serious, where people feel they have to bow down to works of art.”

Doomed’s curator, Matt Martin, agrees: “It’s a place people can actually hang out in. Not just somewhere you visit, pick up your free drink, and then leave. We want people to hang here for the whole night and properly get to know everyone.”

Ken credits the grassroots communal vibe of the gallery to Matt, founder of zine collective The Photocopy Club, and vet of the punk and creative communities of London and Brighton. “Matt’s brought in a lot of people who work outside the gallery system,” says Ken. “It’s now much more driven by people who wouldn’t normally do exhibitions.” 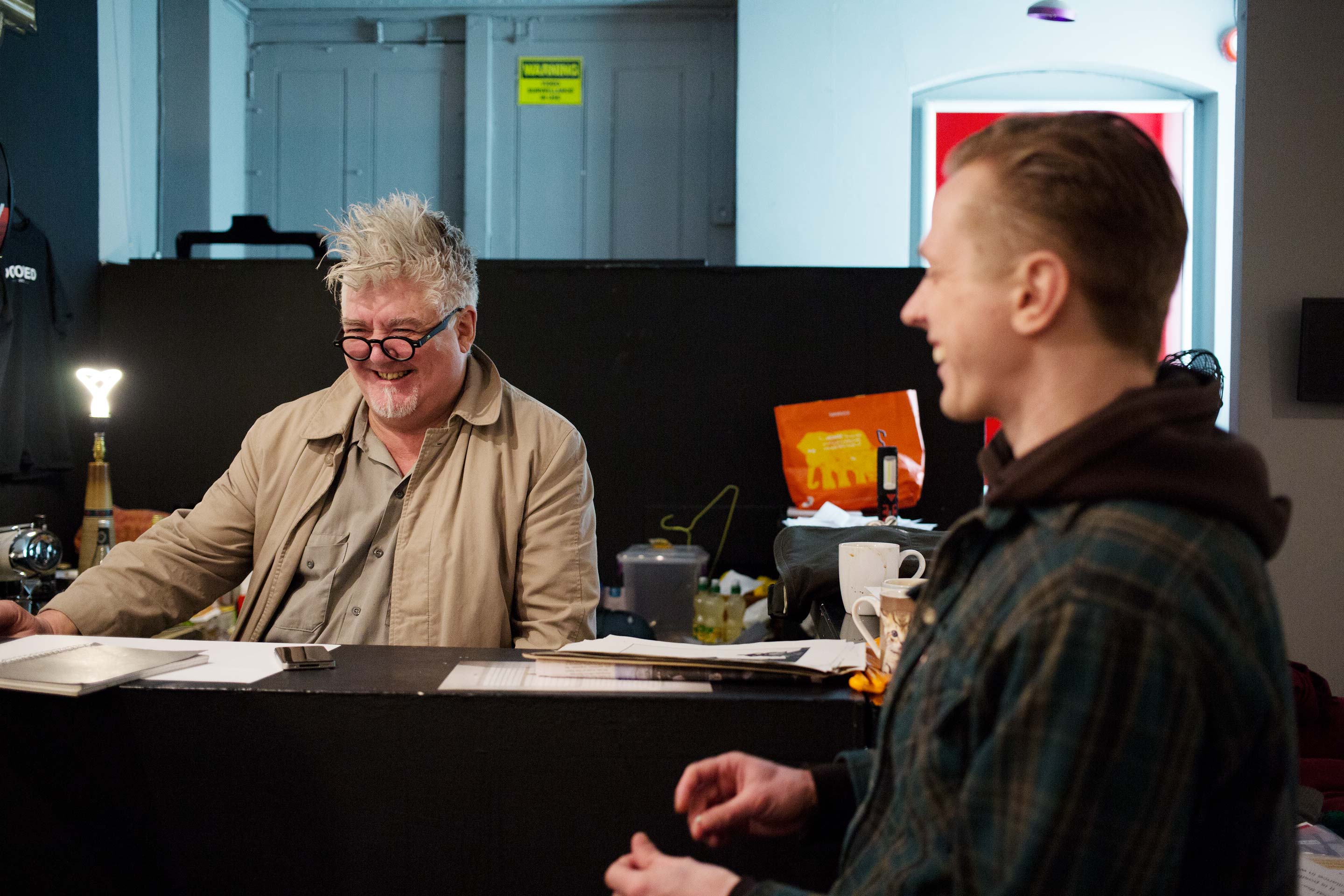 Doomed continues to flourish but both Matt – who works as a freelance photographer – and Ken – who’s studying for a Masters in photography at Westminster University – are under no illusions that the gallery can exclusively sustain them. But creating an affordable space for young photographers to show their work isn’t just an act of philanthropy.

“I learn quite a lot from younger people, far more than I do looking at the established art market,” says Ken. “I find it very difficult to align myself to regular culture. I come from the first wave of punks. I was right there in the Roxy, literally right at the epicentre of it, and I’ve got that anti-everything sort of ethos. So coming into contact with new and emerging artists – I find it quite inspiring.” Adam White

How do I get my gallery off the ground?

Think outside the box –
“Exhibit your work anywhere and anyhow. Don’t just think you can only do it in a place with four white walls. You don’t have to have a big budget, and you don’t have to rent an expensive gallery. I’ve known people who have exhibited in a castle with projections, in old scout halls, even in fruit and veg shops. Someone I knew exhibited in a pub. You could put on an exhibition anywhere.”

Exhibit where you live –
“If you start up a gallery in the space that you live in, it can actually help you keep it going. Primarily you’re just paying rent to survive as an actual tenant – and you’re also letting people into your home every weekend too.” 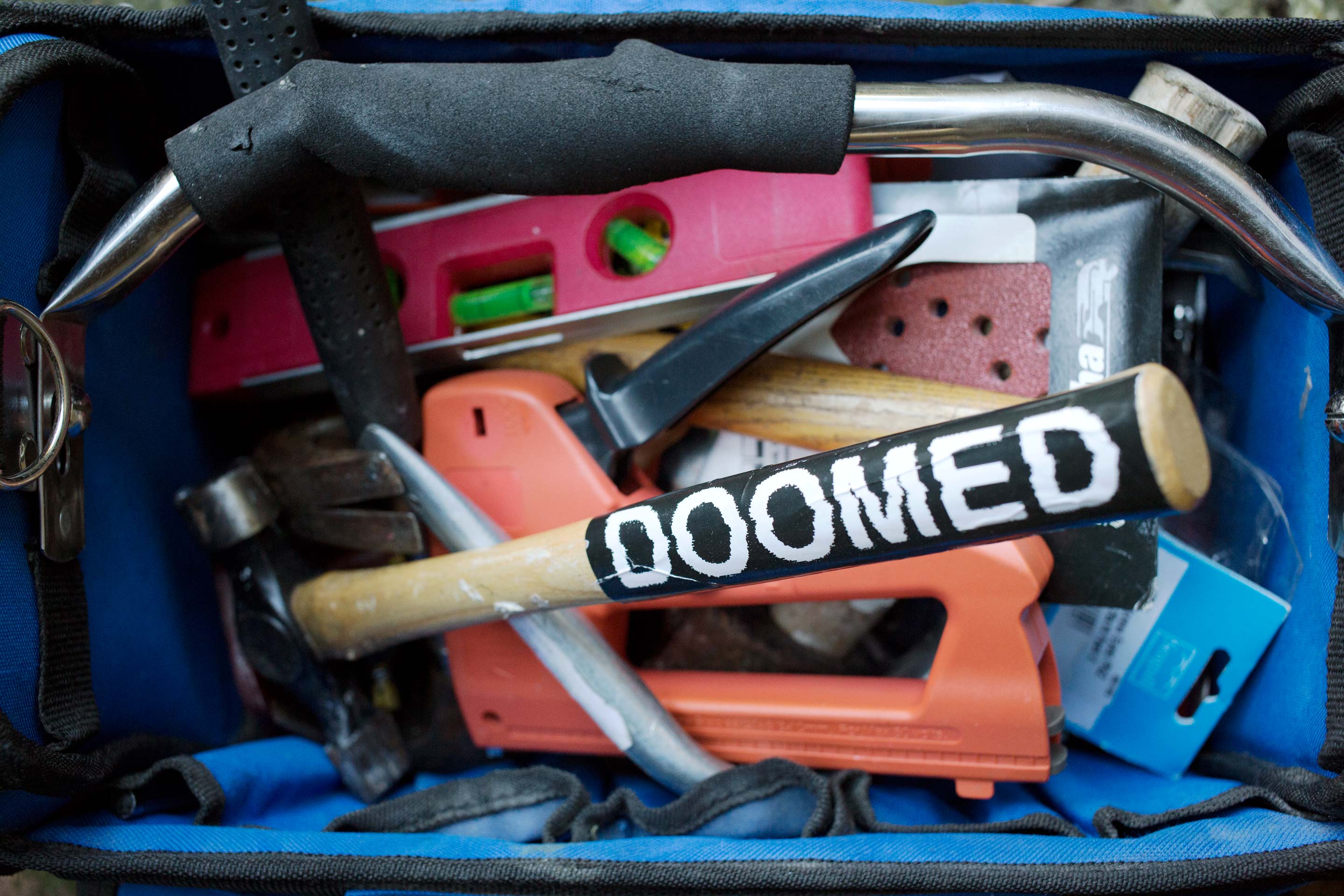 Jump on movements –
“Our first show was the work of a friend of mine who had shot Nirvana playing at Reading Festival. We got the pictures and just put them on the wall. But we opened during the Photomonth Festival in East London, and used it as a launch pad. That got the word out, and from there came a very organic growth.”

Encourage creative freedom –
“We want people to come to the gallery and use it in whatever way they can, not just pictures on the wall. We try and encourage people to do more or less whatever they want with the gallery, and that in itself makes people want to exhibit.”

Embrace the struggle –
“I think this experience has showed us that if you can keep something running long enough, instead of letting it implode on itself, you can sometimes just struggle through. It’s a bit like living on a prayer, but it’s also an incredibly worthy, rewarding thing to keep going.”

Find out more about Doomed Gallery.

This story originally appeared in Huck 54 – The Defiance Issue. Get it now from the Huck Shop or subscribe to make sure you don’t miss another.

Linkedin
RELATED ARTICLES
OTHER ARTICLES
The action took place in response to the 200 asylum-seeking children who were placed in hotels run by the Home Office who have gone missing.
Tristan O’Neill’s shots of dancers caught in moments of reverie at the height of rave’s golden age are a testament to the UK’s legendary club culture.
Photographer Becky Tyrell went down to the fading banger and stock raceway to meet a community desperate to keep it alive.
Photographer Sean Maung reflects on documenting a small town in Pennsylvania afflicted by high levels of unemployment, poverty, violence, crime, and addiction.
Social prescribing connects people with non-medical support to improve their health and wellbeing – but some experts worry it’s just a stick plaster solution.
Author Edward Banches dicusses his new book, which examines the hard rock and metal scenes in five African countries: Botswana, Togo, South Africa, Kenya and Ghana.