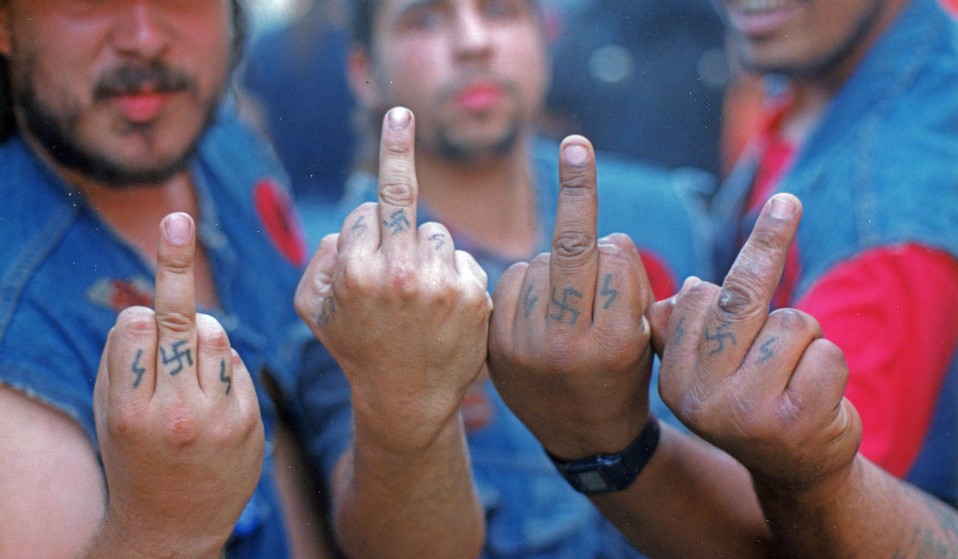 The uniformed street gangs who inspired The Warriors were violent pillars of community identity, before being destroyed by gentrification and the drug trade.

The uniformed street gangs who inspired cult classic The Warriors were violent pillars of community identity, before being swept away by gentrification and the commercialisation of the drug trade.

The Satan’s Sinners Nomads, the Lower East Side’s last street gang to wear colours, was disbanded by its leader Cochise in December 1993. After stabbing two of the gang’s members during a disagreement, throwing them into the East River and leaving them for dead, Cochise was on his way to prison, where he would serve 18 years for Attempted Murder. “Just before I went up north to Clinton Correctional facility, I broke up the gang and I began to reflect on what I did with my life,” he remembers. “I promised myself and my family that I would change.” And so a chapter in the city’s popular history was closed forever.

Gangs have always been an integral part of New York City’s identity. Since the earliest immigrants stepped off boats, they’ve banded together to try and escape poverty, protect one another, and find kinship. From the Irish Mob, and the Italian and Jewish mafias, to the Latin Kings, Bloods and Crips who control much of the drug trade today, gangs have always shaped the city’s culture. But perhaps the most culturally significant were the mid-20th Century street gangs, who wore their identifying colours with pride and helped give birth to art forms that have become synonymous with NYC, such as breakdancing, doo-wop, graffiti and hip-hop. However, as gentrification has swept in, they’ve been wiped out, along with other aspects of the city’s once-vibrant street culture.

The colourful crews who battled for control of every block in the city’s tougher neighbourhoods were immortalised in Walter Hill’s cult 1979 movie, The Warriors. But by the 1970s, the traditional street gangs were already in decline. Following the Vietnam War drugs grew to dominate, and gangs became less about neighbourhood identity and survival and all about controlling this lucrative trade. Disputes over territory escalated from street brawls to drive-by shootings, while gang members themselves slid into bland anonymity as it was better for business.

Artist, photographer and activist Clayton Patterson has documented gang activity on the Lower East Side since moving there in 1979. In 1988 he met the Satan’s Sinners Nomads, became fascinated with how they were fighting to keep traditional elements of the old neighbourhood gang life alive and began photographing them. 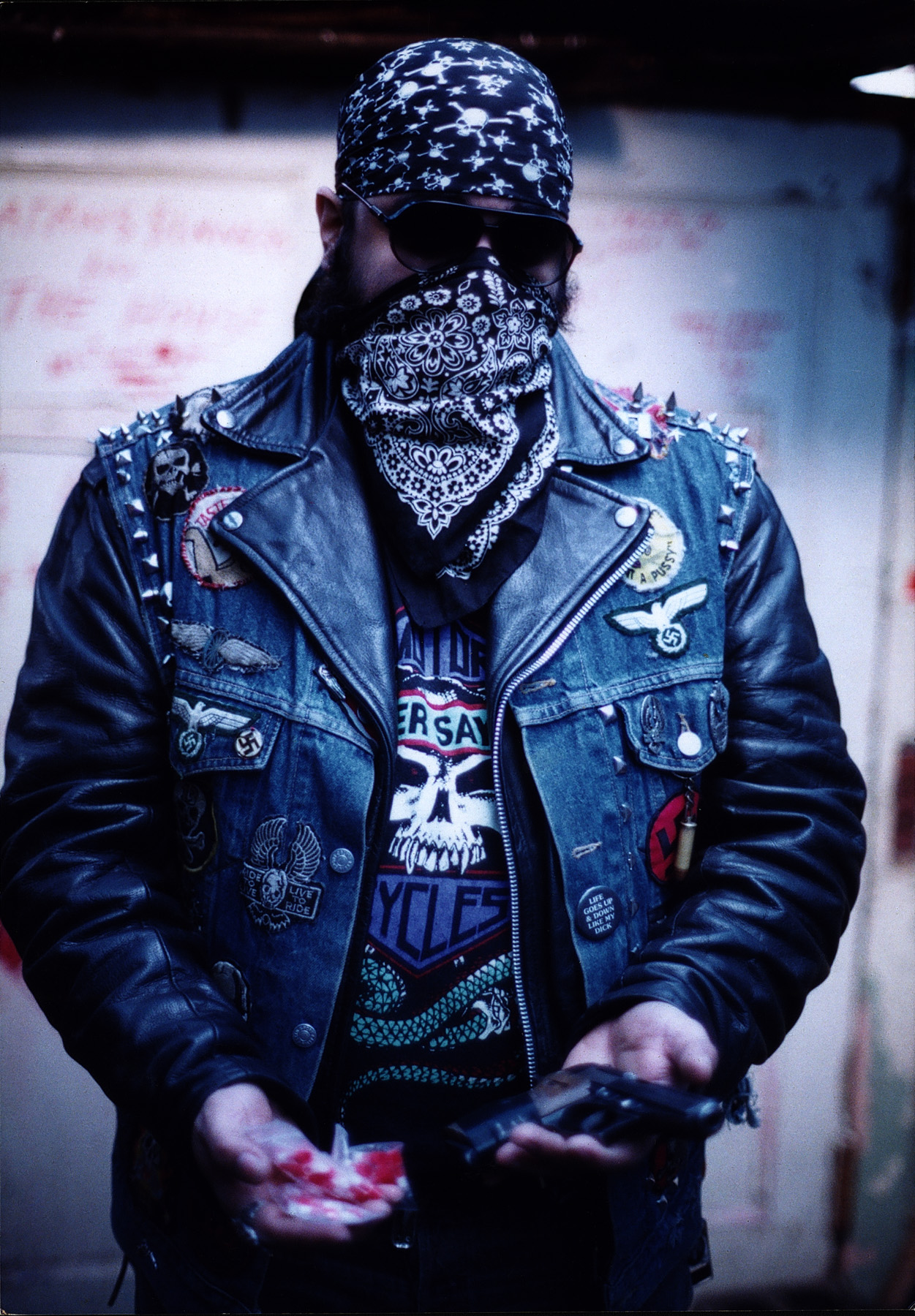 Cochise in 1992. A crack dealer aggravated Cochise so he took away the dealer‘s crack and gun and threw everything into the river.

Since being released from prison many years later, former leader Jose “Cochise” Quiles has left the gang life behind, embraced art and now shares the stories of his past with young people to encourage them away from the dangerous path. In an attempt to preserve the history of a largely forgotten and misunderstood culture, he recently collaborated with Clayton on a book, The Street Gangs Of The Lower East Side.

The immigrant-dominated cultural melting pot of the Lower East Side remained one of the most deprived and anarchic neighbourhoods, which provided an outpost for some of the city’s last classical street gangs – like the Satan’s Sinners Nomads and their contemporaries, such as the Allen Boys and the Forsyth Street Boys. The severe economic decline of the inner city and a policy of benign neglect left the area with scores of derelict buildings and empty lots, which became 24/7 open-air drug markets. These local gangs were formed around representing the neighbourhood, social brotherhood and looking out for one-another in a dangerous area the police could not control. Their colours an important statement of identity and bound the gangs together. 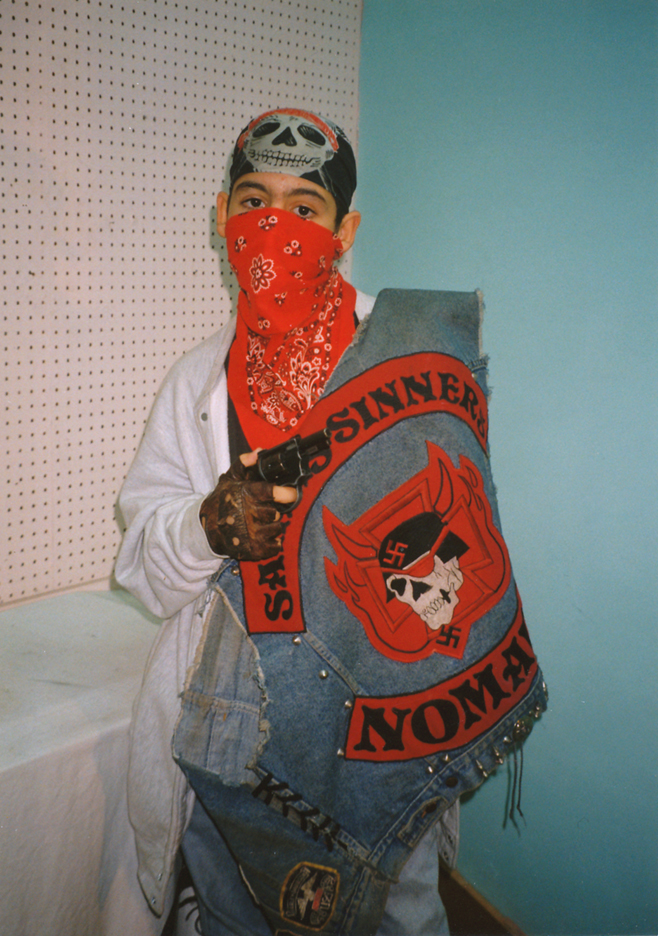 Piro in front of a Cochise painting. Piro was the youngest SSN joining at age 13. 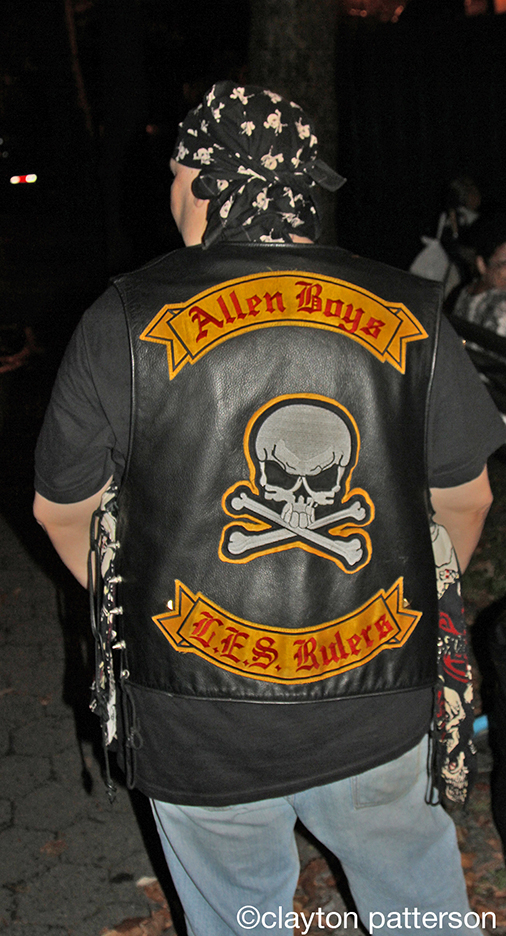 A member of the Allen Boys.

“People in all sorts of cultures, groups, gangs, clicks, and so on, like to separate themselves from the rest of the population,” Clayton says, giving high school fraternity jackets as an example. “It gives them a certain status in their mind, as belonging to something that’s exclusive, unique, individual. They’re part of the privileged group that can wear those images and gangs are the same. It gives you a certain kind of individual power, the group collective, and that imagery, which brings to mind the group collective, conveys a sense of power.”

As a young Puerto-Rican kid growing up on the LES without a father, Cochise was taken in by the allure of the gangs’ attire, but they also offered him a way to find and understand his own identity. “NYC back in the late ‘60s and ‘70s was very violent and I was infatuated with [gang culture],” Cochise remembers. “I looked up to the gang leaders. I liked their style, I liked their swagger and the way they wore their so-called street uniform: the cut-up denim jackets with the gang colours on the back, the black motorcycle boots, the skull buckles, the tattoos, the handkerchiefs, the outlaw hats. Each gang had a different name and different types of colours – I was very drawn to that. I sought to be like them, even though they were very violent. But we were being schooled at the same time. I’m Puerto-Rican and I learned my culture through these gang leaders because they were around longer than I was.”

Tompkins Square park on the LES was a symbol of the police’s lack of control. It was the last park in the city to remain without a curfew and home to Tent City, an encampment of homeless people. It was here in 1988 that the Satan’s Sinners Nomads was founded, when Cochise met Spider, a central figure in the TSP Homeless movement, and Mantis, who sold crack for a Harlem Dominican boss and also robbed cars. 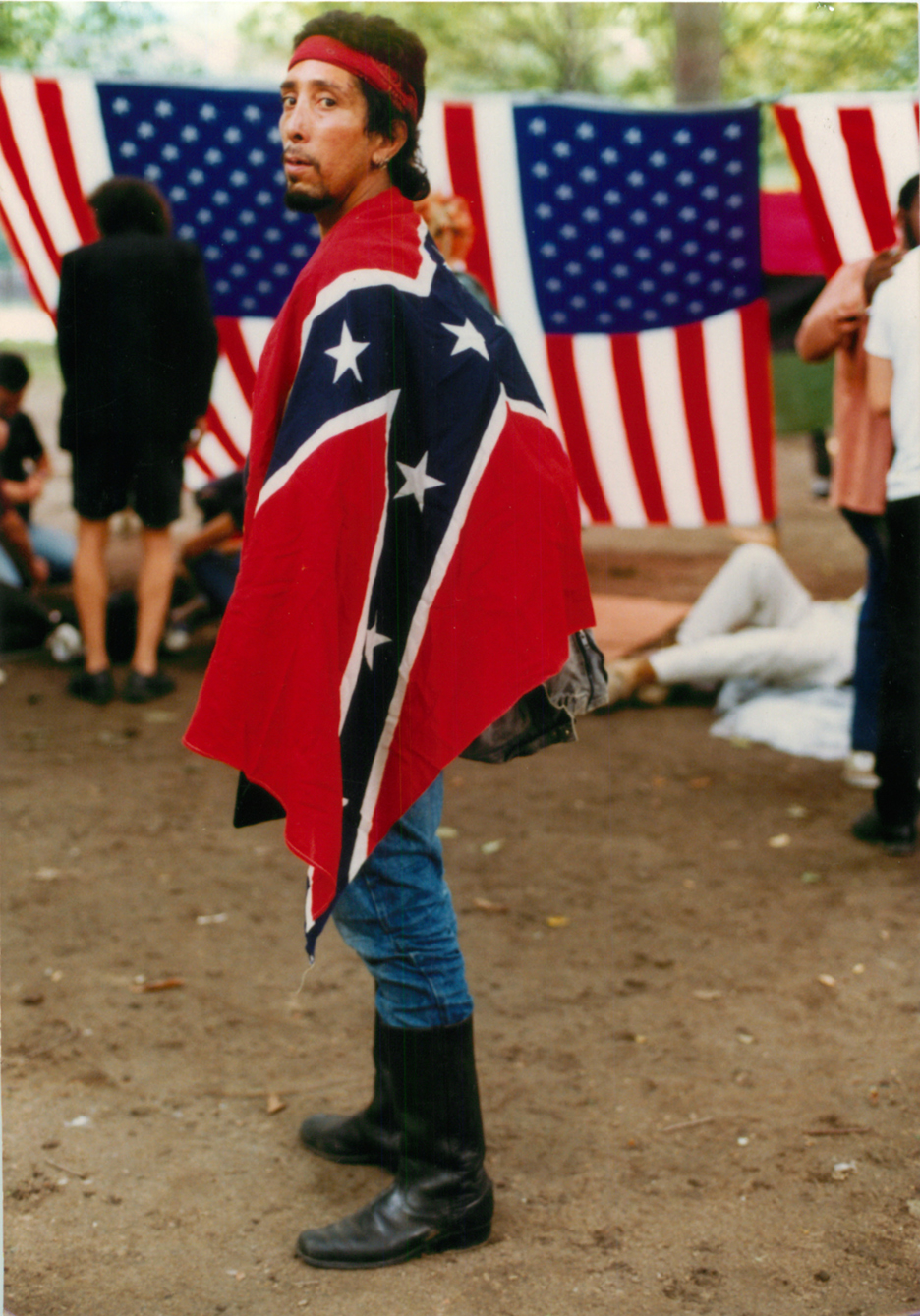 Spider wearing rebel flag in Tompkins Square Park on Flag Day in 1989. The idea behind Flag Day was to set up American Flags as shelters and the cops would have to desecrate the flag to evict park residents. 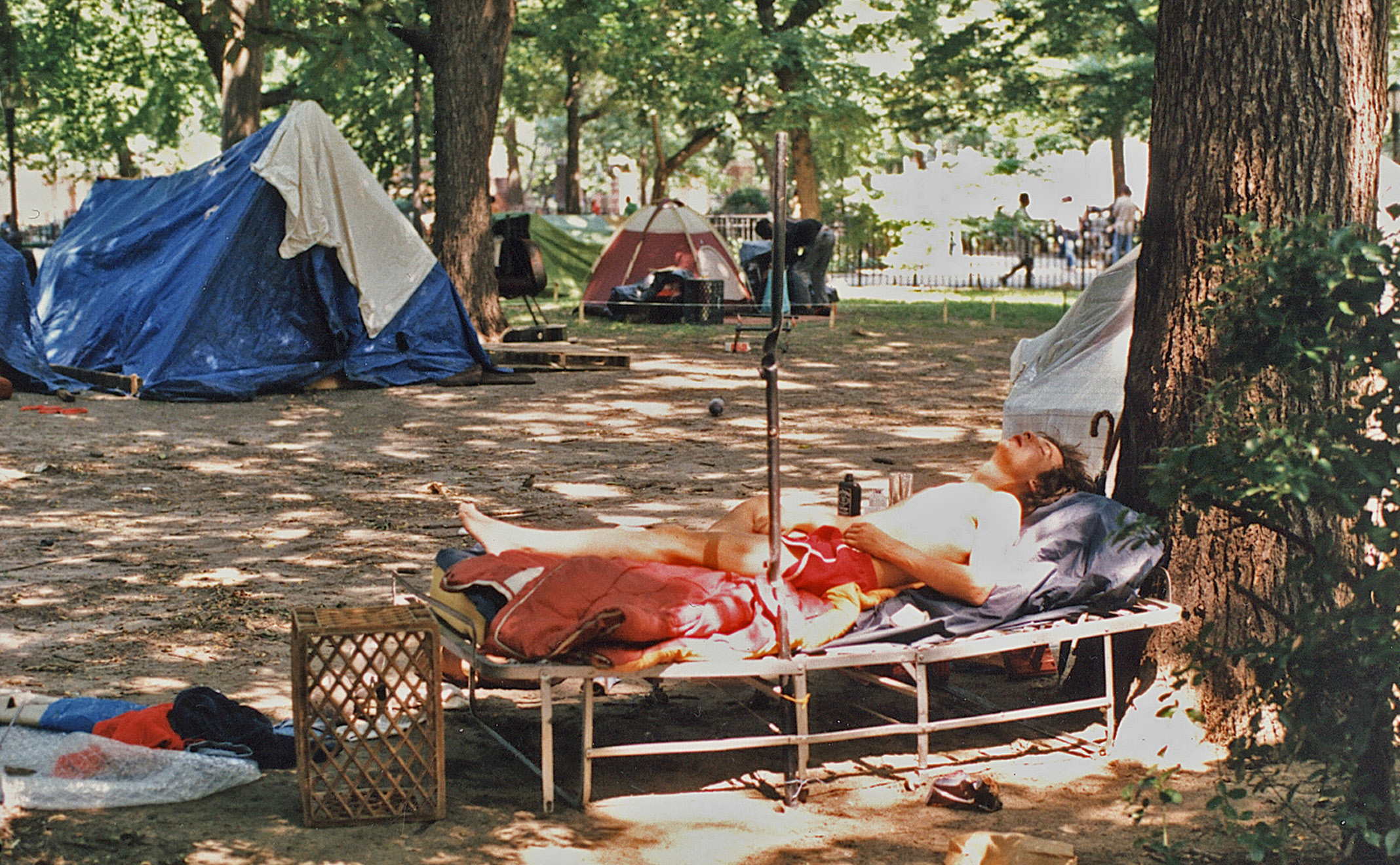 Cochise designed the gang’s colours, which included an embroidered, white warrior skull, swastikas, a red Maltese cross and a WW2 German Gestapo helmet, among other decorations. Cochise explained that “the red swastika symbolises blood, the blood of our enemies, those who chose to come against us,” but was not meant to be anti-Semitic as much as to be anti-social – a mystical image that creates fear and loathing. Other street gangs used the numbers 666, a biblical reference to Satan, and FTW, an abbreviation of ‘Fuck the World’.

Violence was a part of everyday life in New York City during this era and gangs have been dismissed as part of the menace. “We had our guns, 38s, sawed off shotguns, baseball bats, garrison belts, leather belts, chains and sticks,” he says. “That’s how we fought our rumbles.”

But violence of street gangs rarely spilled out of their own world – and they played a significant role in community cohesion. “Street gangs are heavily involved with the identity of the neighbourhood,” Clayton explained. “When violence was coming in from other areas, they kept people out – it was community defence in a sense. They maintained the peace and stopped people running around, robbing people’s mothers.” 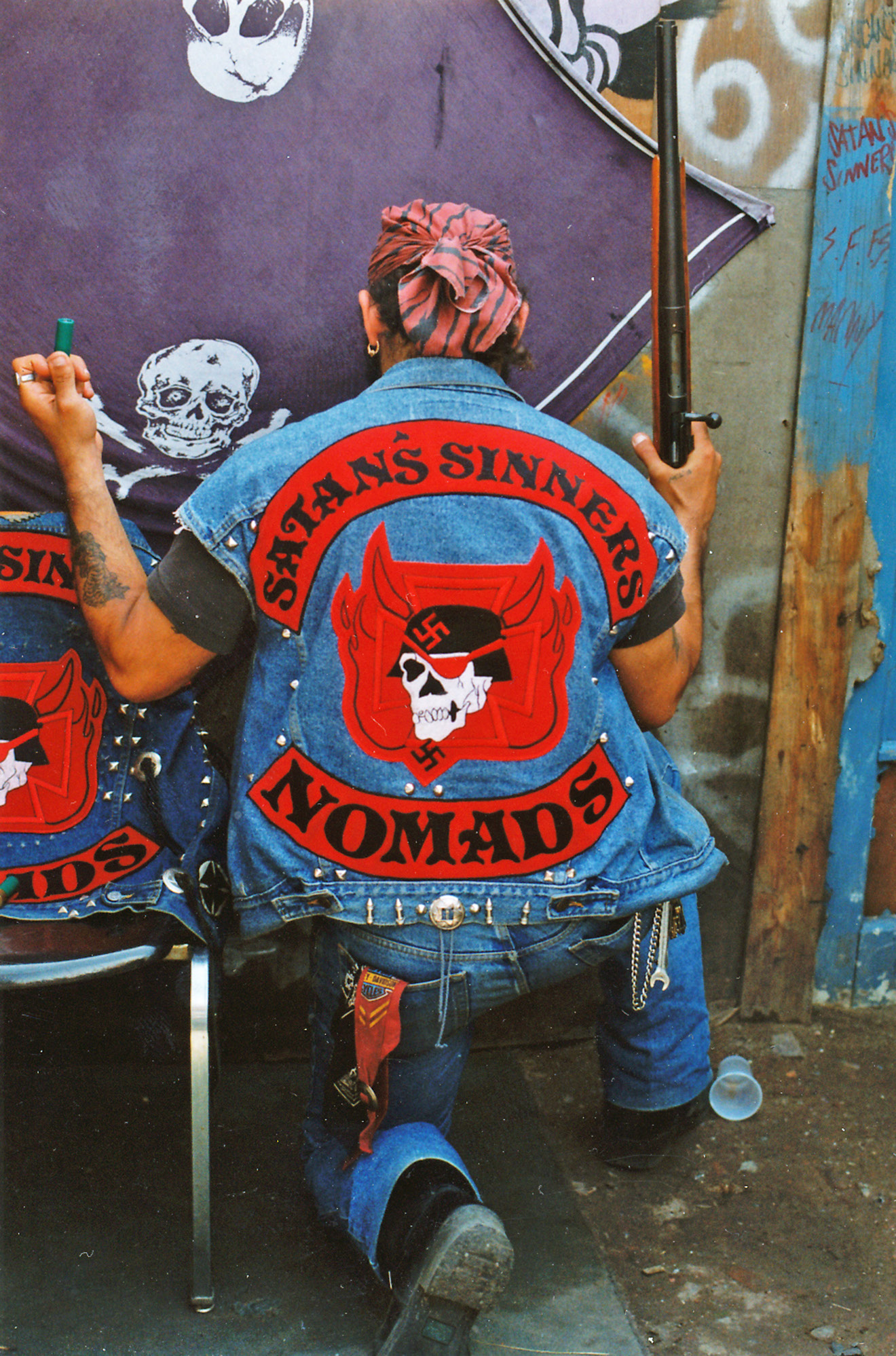 Rocco in 1992, holding up shotgun and shotgun shell. Red handkerchief in left pocket which some members wore. 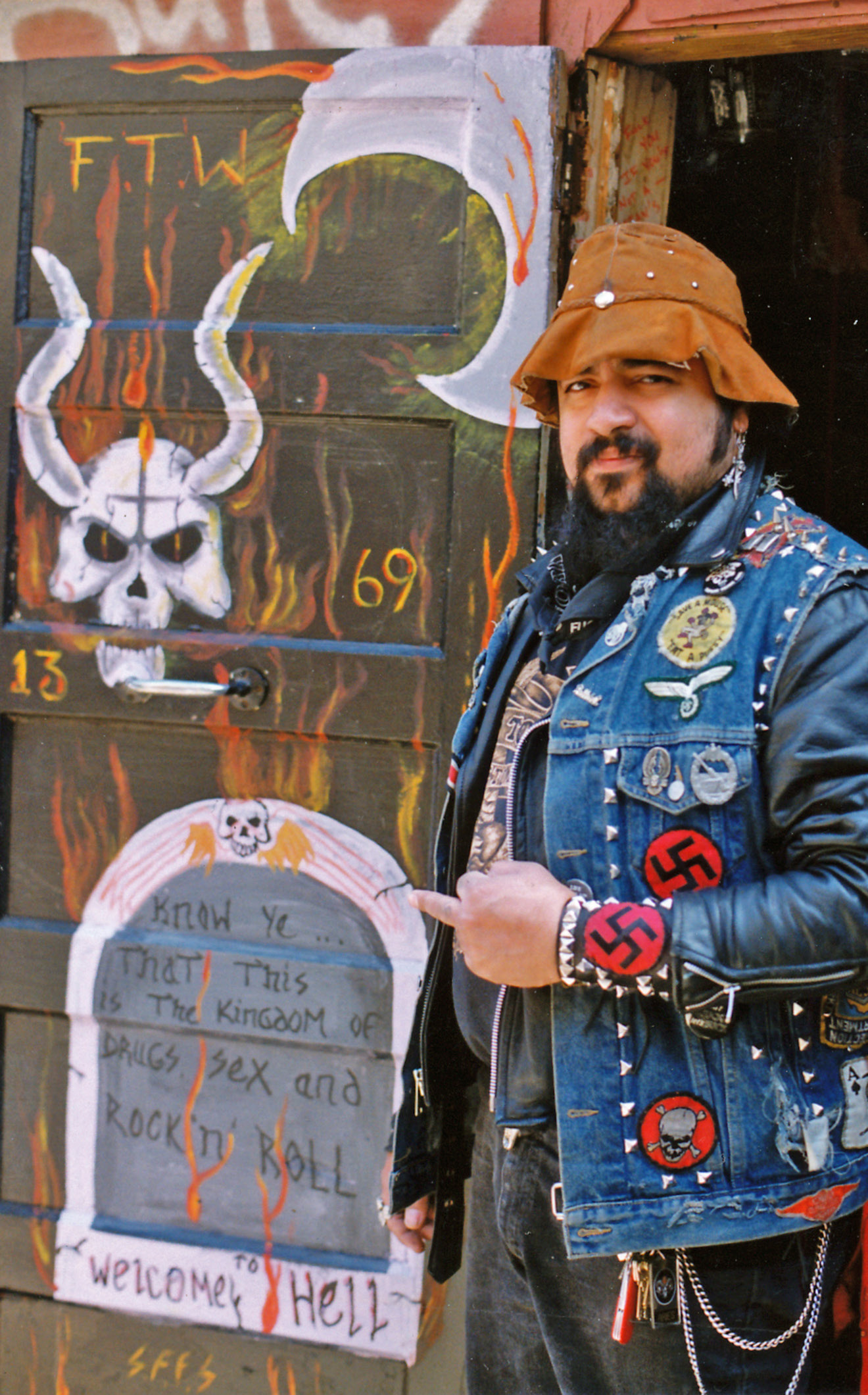 Cochise in 1992, in front of Club House door he painted.

As the drug trade boomed, gangs went underground, began to tool up and any positive connections to the community began to disappear. “The gangs of today have a lot more weaponry than we did back then, we didn’t have Uzis or Glock 9mms,” Cochise explains. “They’re far more organised and so deep into drugs, there is no sense of camaraderie or brotherhood. It’s all about dealing a drug for a particular organisation. If you have to kill somebody you kill somebody, but there is no loyalty in that, there is no schooling as far as learning your history, your culture, it’s just hanging out in the neighbourhood, selling drugs, getting high.”

This evolution was wrapped up in the gentrification of NYC, which began in earnest on the Lower East Side and would have profound consequences for other parts of the city. The Tompkins Square Park police riot in 1988 (which Clayton videoed in order to prove it was the police who were responsible for the violence) led to the establishment of the Mollen Commission, which substantially reorganised the NYPD. Taming the radical fires of the Lower East Side became research and development for the newly effective and well-organised force, which went on to stamp out low-level crime across the city for the first time – in the process wiping out much of the city’s street culture, making the wearing of colours impossible and paving the way for gentrification. 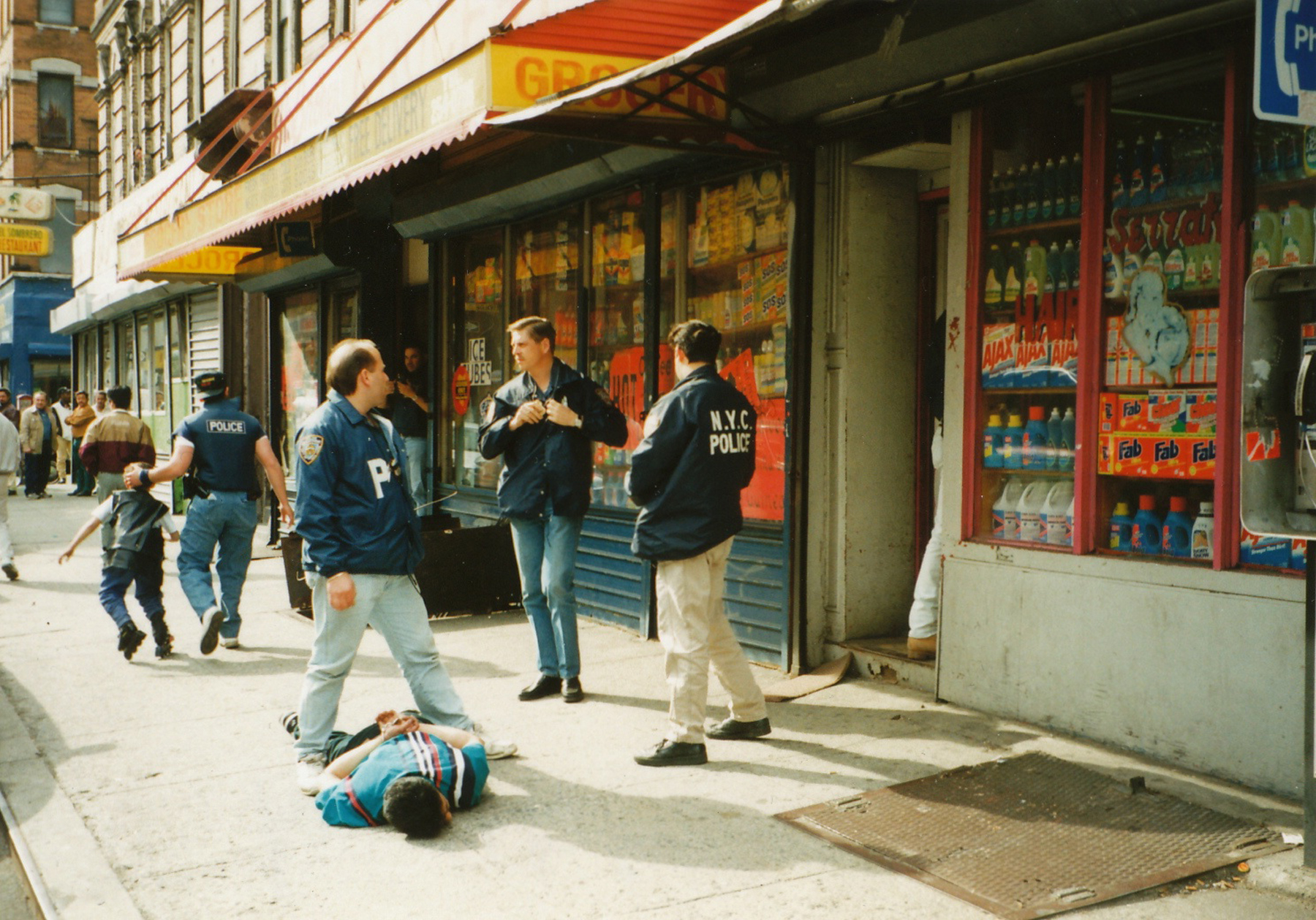 Drug arrest at 179 Essex street in 1995. Typical example of a neighbourhood grocery store whose main source of income was selling hard drugs. The Lower East Side was one of the most economically profitable and open public drug markets in America and probably the world. Drugs were sold openly all over the minority section of the community.

“I look at them like the Starbucks of the gang world. Because instead of having the local Satan’s Sinners Nomads, you might have the Bloods, the Crips or the Latin Kings, who have worked their way across the country through the prison network and exist to sell drugs,” he continues. “So you have this homogenisation, which is another form of gentrification and goes hand in hand with the expansion of corporate culture, the breakdown of the neighbourhood and the loss of community identity.”

The Street Gangs Of The Lower East Side is by Clayton Patterson and Jose “Cochise” Quiles.

Linkedin
RELATED ARTICLES
OTHER ARTICLES
With the singer’s tour in full swing, we sat down the musical production company who made the electrifying show possible.
Following the release of their third album, the duo talk collaboration, family and connecting with the dead.
We catch up with the singer in her London studio to connect the dots between music, painting and her relationship with the city.
Jamel Shabazz’s photos honour those who were lost and those who survived one of the most brutal eras in recent history.
After being subject to racism growing up, Kavi Pujara’s photo series allowed him to reconnect with and reimagine his hometown.
A campaign led by ex-torture survivors and refugee organisations has left the Tories with no planes left to carry out their callous scheme.