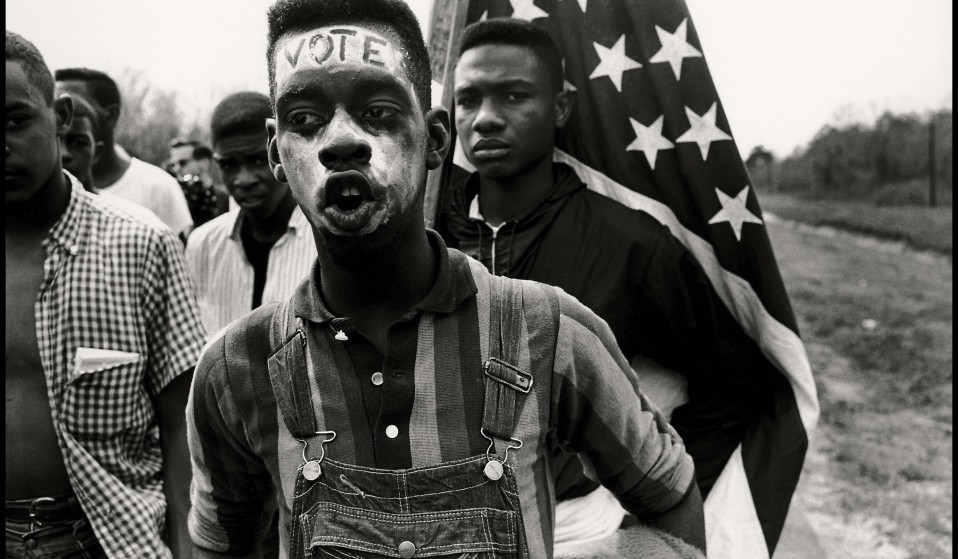 For their first square print sale of 2018, Magnum invite photographers to explore and reexamine their own personal relationship with freedom.

As part of their first square print sale of 2018, Magnum ask photographers to explore the notion of freedom, inviting them to reexamine their definition of what it means to be truly free.

Be it personal, political or creative, the mechanics of what it means to be truly free are shaped solely by the individual. Rarely – if ever – will it mean the same thing to two different people.

For their first square print sale of 2018, Magnum Photos asked photographers to reexamine their definition of the term, inviting them to explore their own personal relationship with freedom and their various encounters with it over the years: from shooting the Paris riots of 1968, to capturing the withstanding idea of the American dream of the 21st century.

During the sale – which runs from Monday 4 – Friday 8 June, 2018 – prints are available at the Magnum Photos Shop for $100 each. Images are printed on 6×6-inch archival paper and either signed by the artist or stamped by their estate. 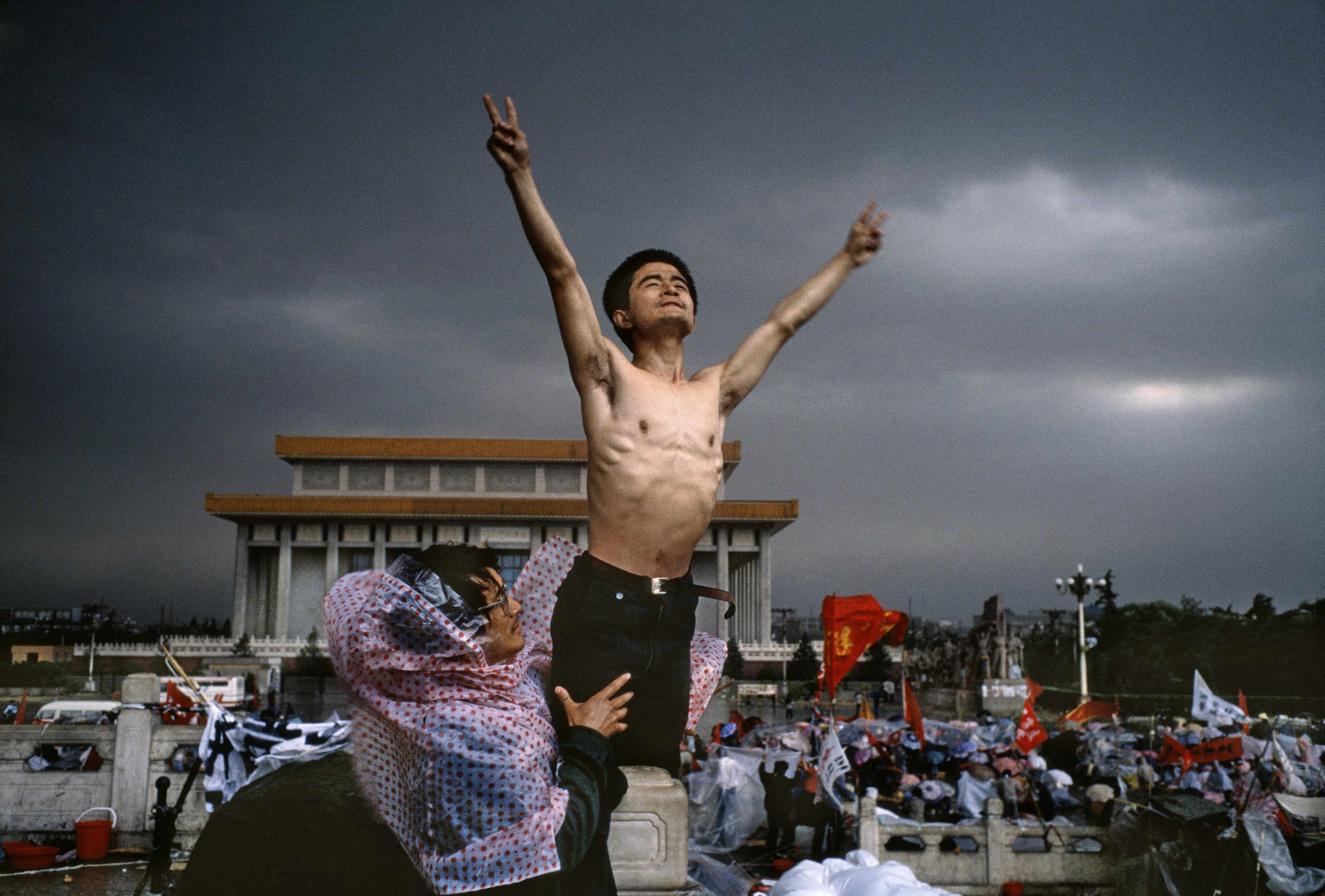 “‘Man is free, but men aren’t. There are no limits to the freedom of one, there is no freedom for all. All is an empty room, a clumsy abstraction until one finds one’s independence is lost.’ – Louis Aragon (1925).

This photograph was taken in late May, 1989, during the Tiananmen Square uprising, led by Chinese students and their supporters. They were protesting corruption and activating for freedom of expression.” 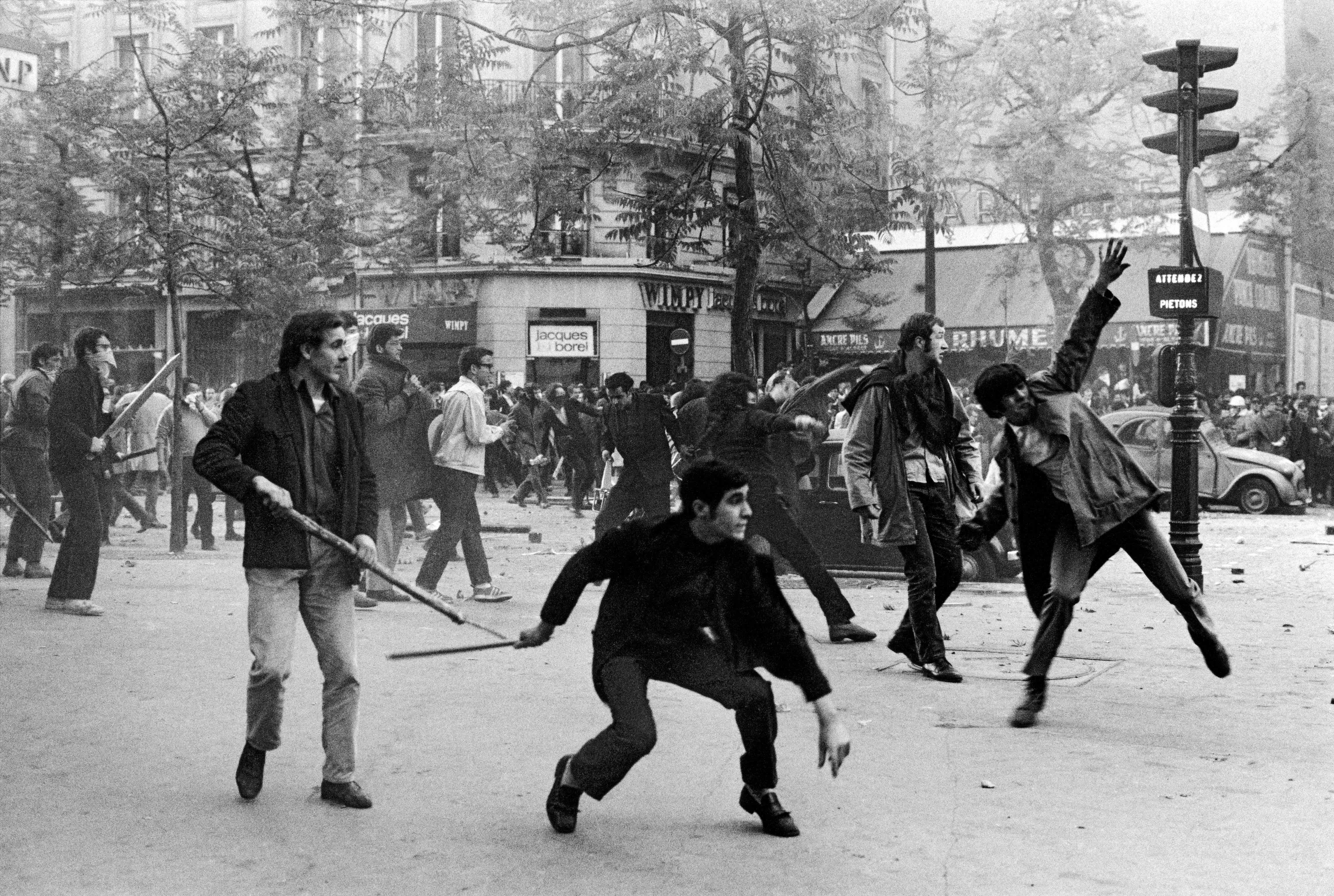 “After a long trip in Southeast Asia (the Vietnam War was raging) and Japan, I returned to Paris in the Spring of ’68, where major riots were taking place. I photographed the majority of demonstrations in Paris. For weeks, my clothes were soaked from the stubborn odor of tear gas.

There was an urgency to communicate, to speak with one another, to question everything; it was the rebellion of a generation against that which society had prepared for it, against all that came from above. May ’68 was also an indispensable luxur at the time of the Prague Spring, as Prague was being crushed by the tanks from the Warsaw Pact.” 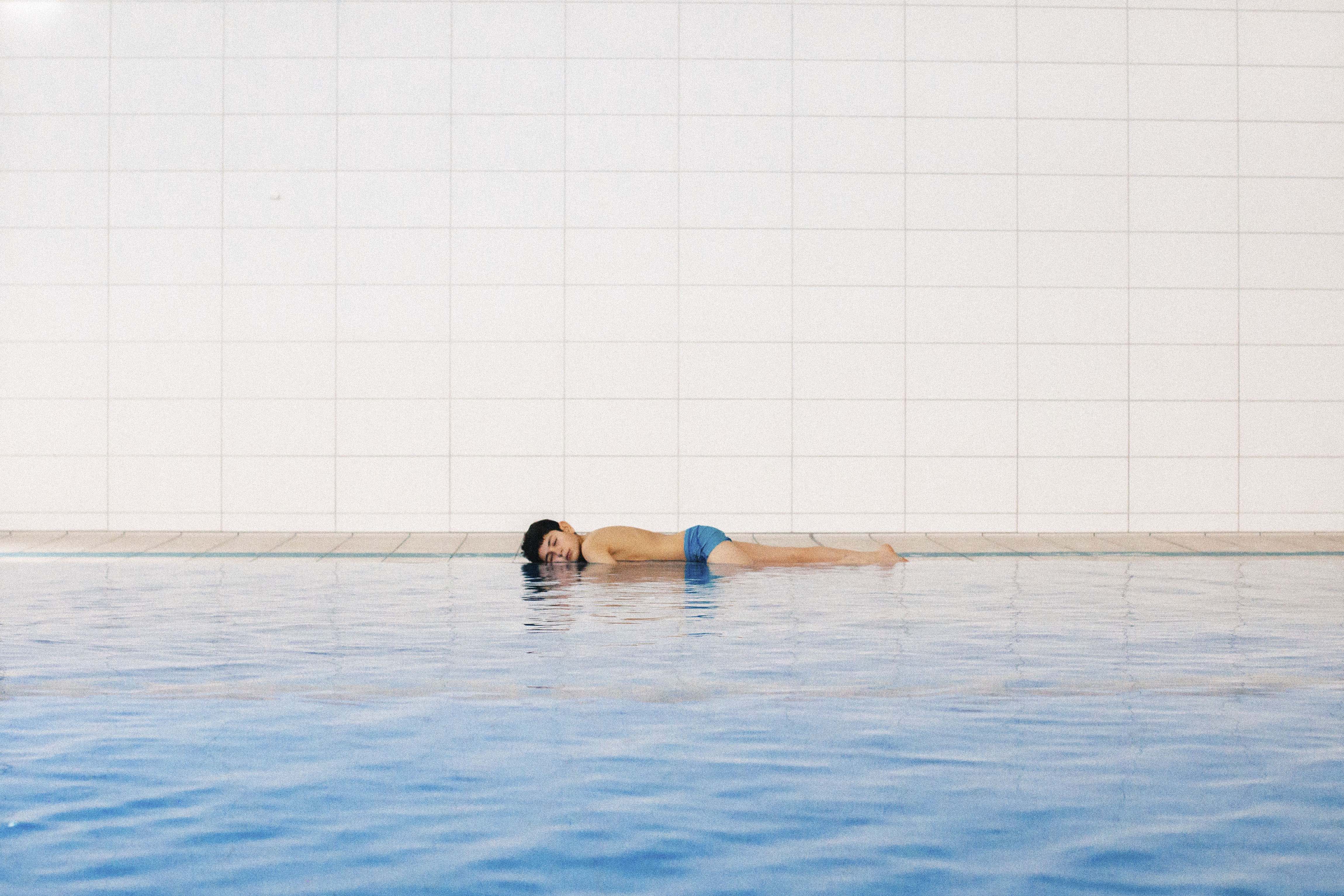 “It was night when Doud boarded a small rubber boat. It was his first time seeing the ocean, and now he was amongst a group of refugees, escaping their homes in search of freedom elsewhere. Doud didn’t know how to swim and feared the boat would sink.

A year later, now in Germany, he is with a handful of other refugees learning to swim as a way of overcoming their fear of water associated with the journey they made to Europe. When I look at this image, I see the trauma that accompanied Doud’s sacrifice. It’s a constant duality for me: there is no freedom without that risk.” 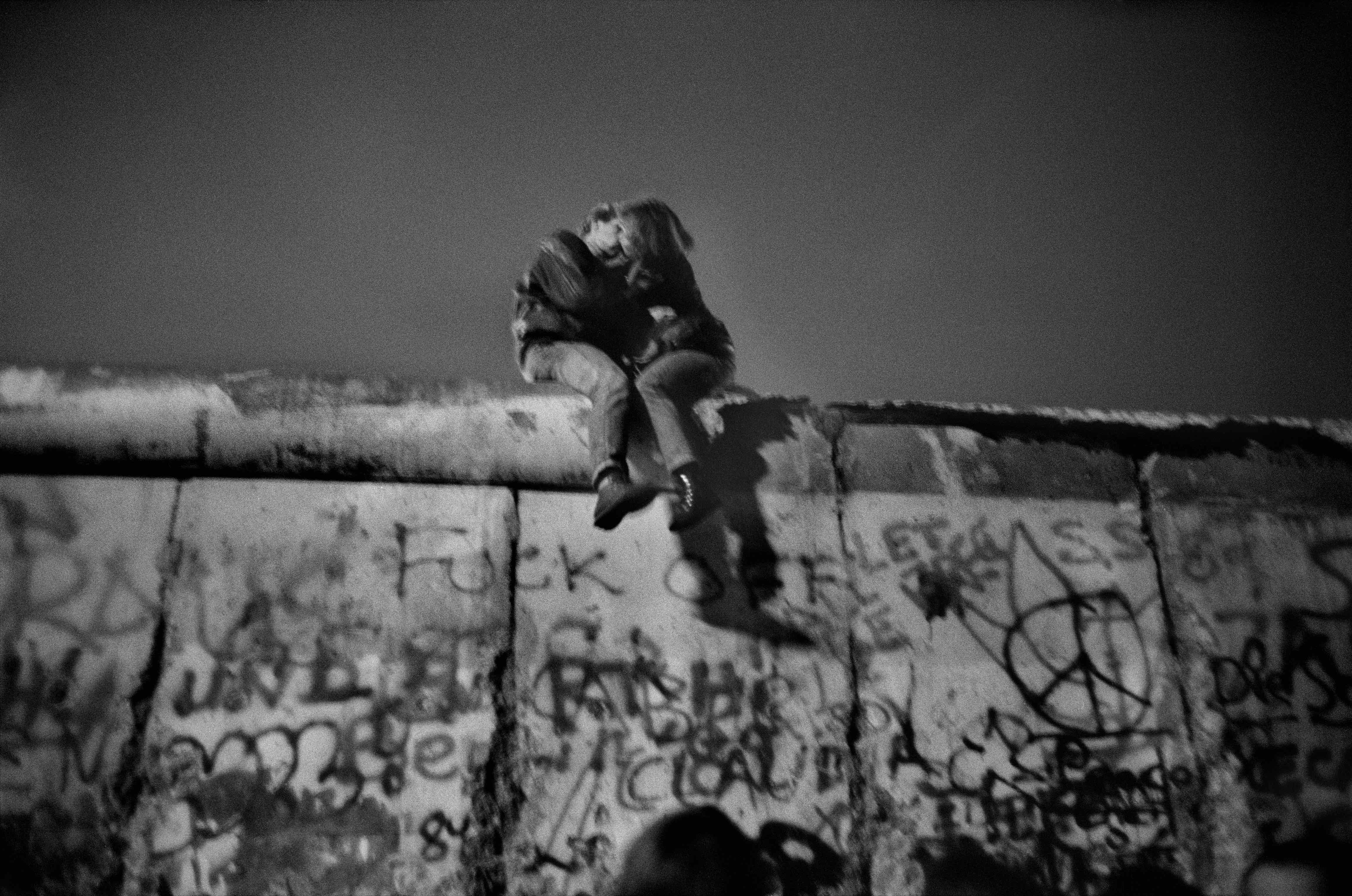 “A few days after the fall of the Berlin Wall (the 9th of November, 1989), joy and enthusiasm were continuous. The euphoria grew even greater on New Year’s Eve. A very dense human tide had gathered around the Brandenburg Gate: warmth, embraces here and there … In this incessant frenzy, tears blended with laughter. People of all ages, backgrounds and nationalities were becoming closer as the fireworks and squibs exploded relentlessly. Champagne was flowing.

After photographing the jubilation of this overexcited crowd, I decided to move to a quiet place. I glimpsed, hidden by a row of shrubs, a young couple sitting astride the top of the wall. They were surrendering to this intimate and peaceful moment to love each other and celebrate this new freedom.” 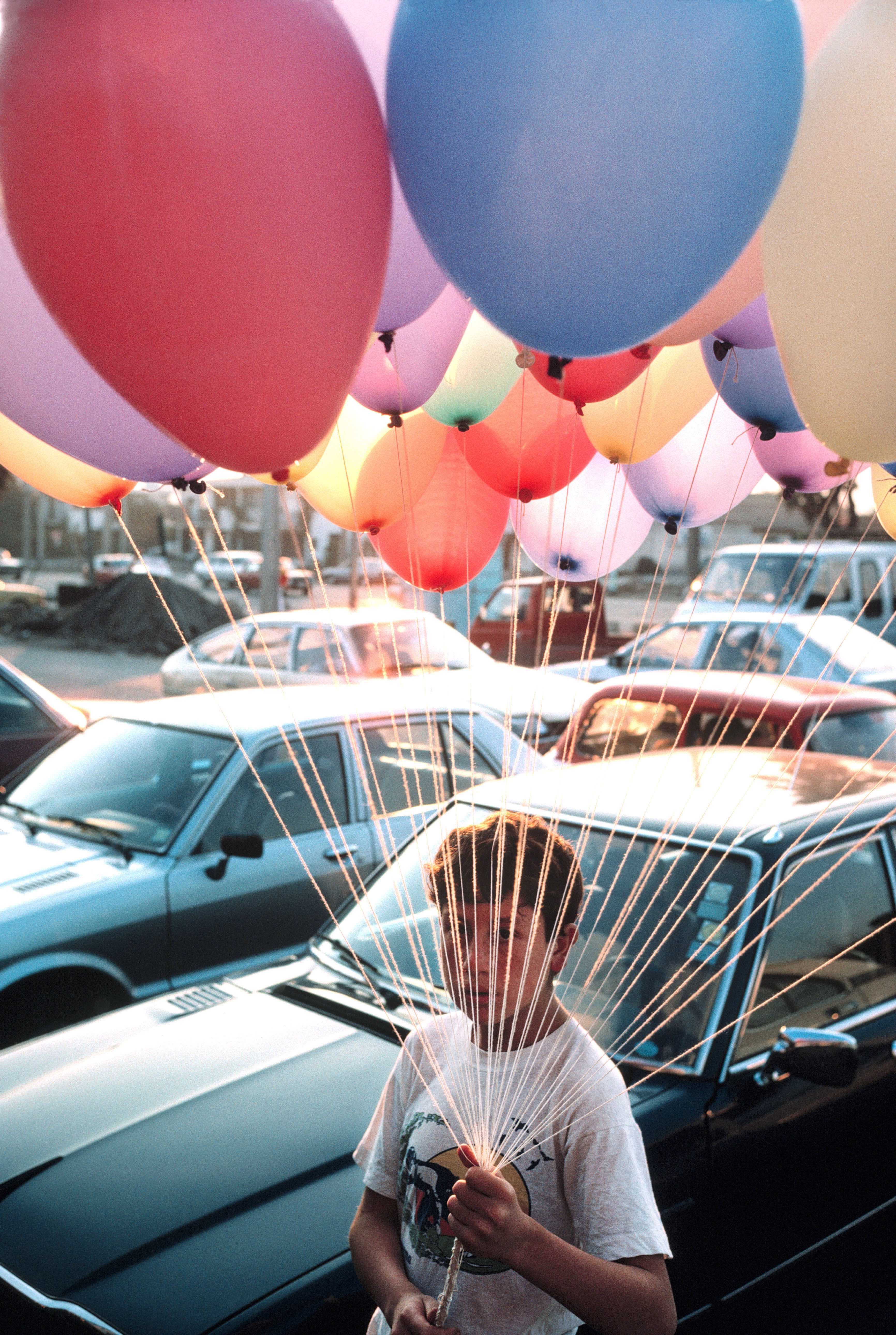 “On my right wrist is a small tattoo: a red balloon. Why? It’s in honour of the ’50s French classic short film The Red Balloon. Saw it when I was a kid. Watched it last week.

The last scene has always been burned into the back of my brain. When I saw this boy in Santiago, Chile, that ultimate image of freedom popped into my head. There are all kinds of freedom. Creative freedom being one of the most rewarding.” 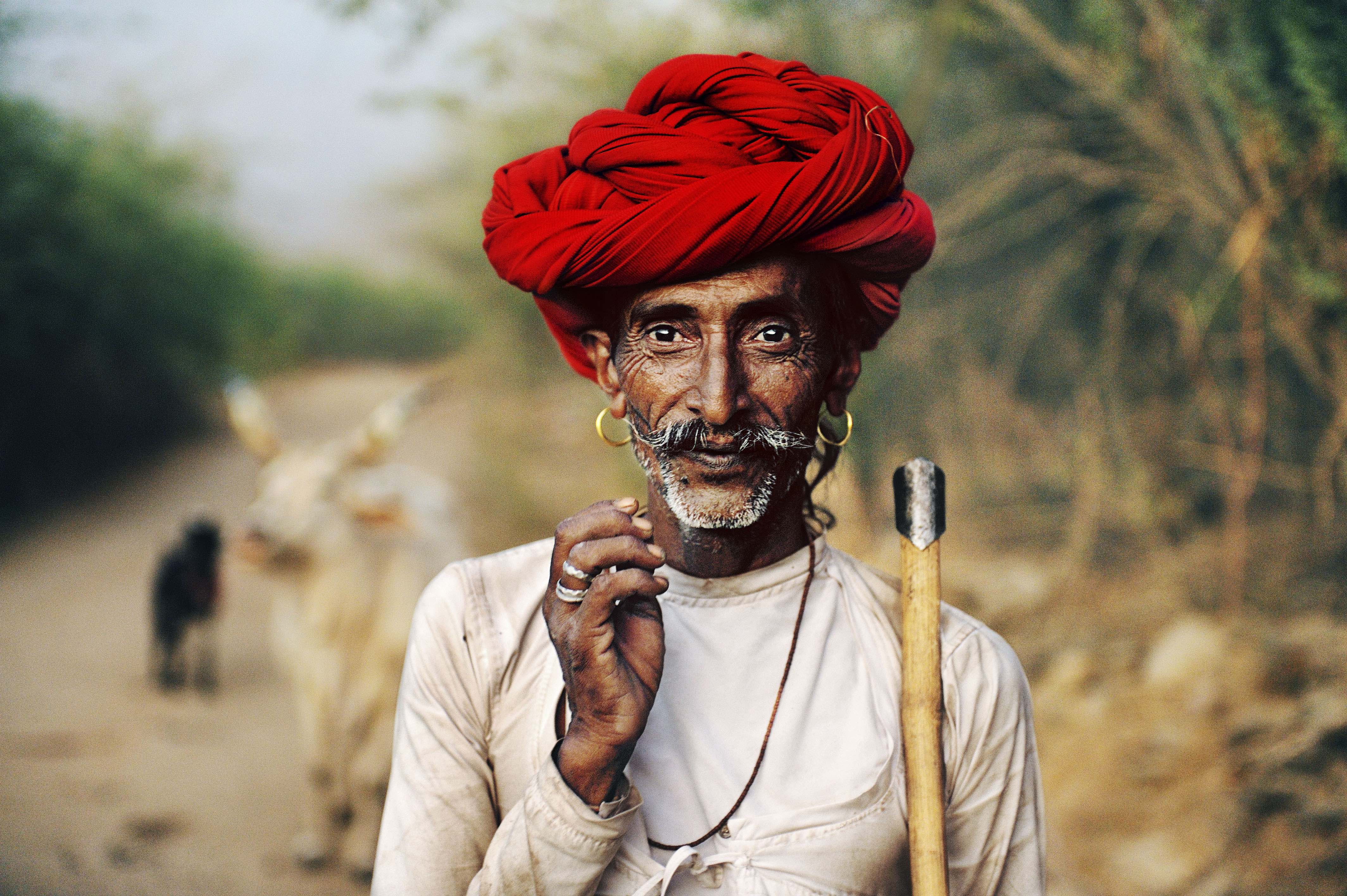 “A Rabari herdsman in Rajasthan, India, leads his livestock to the spot where they’ll rest for the night. He carries an axe, which he uses for cutting fodder. Their semi-nomadic way of life is threatened by urbanisation, government policies and the loss of grazing land.” 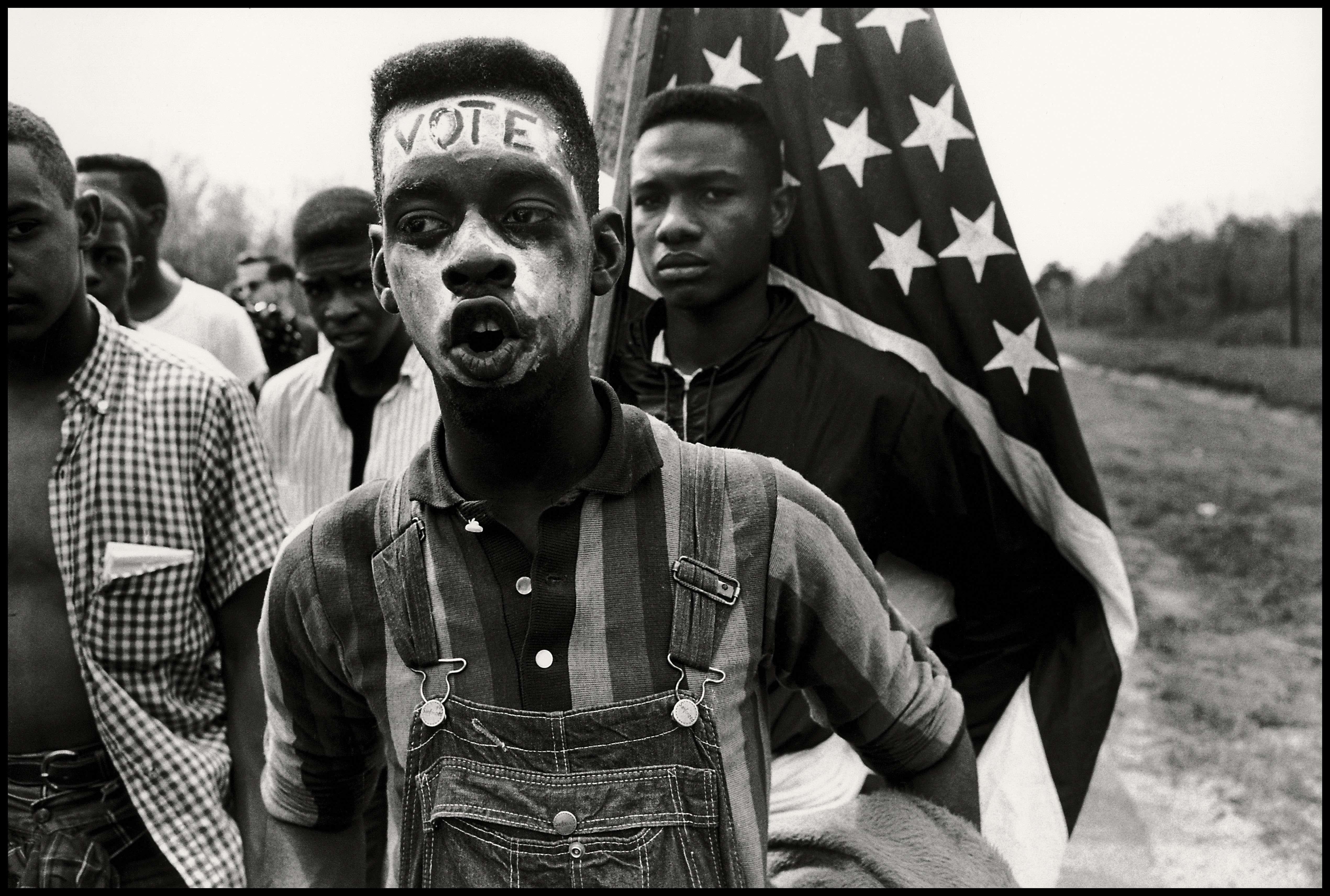 “From 1961 to 1965, I bore witness to various demonstrations in the civil rights movement. In this photograph, a group of civil rights demonstrators march from Selma to Montgomery to fight for the right to vote. Freedom was then, as it remains today, something that had to be fought for.” 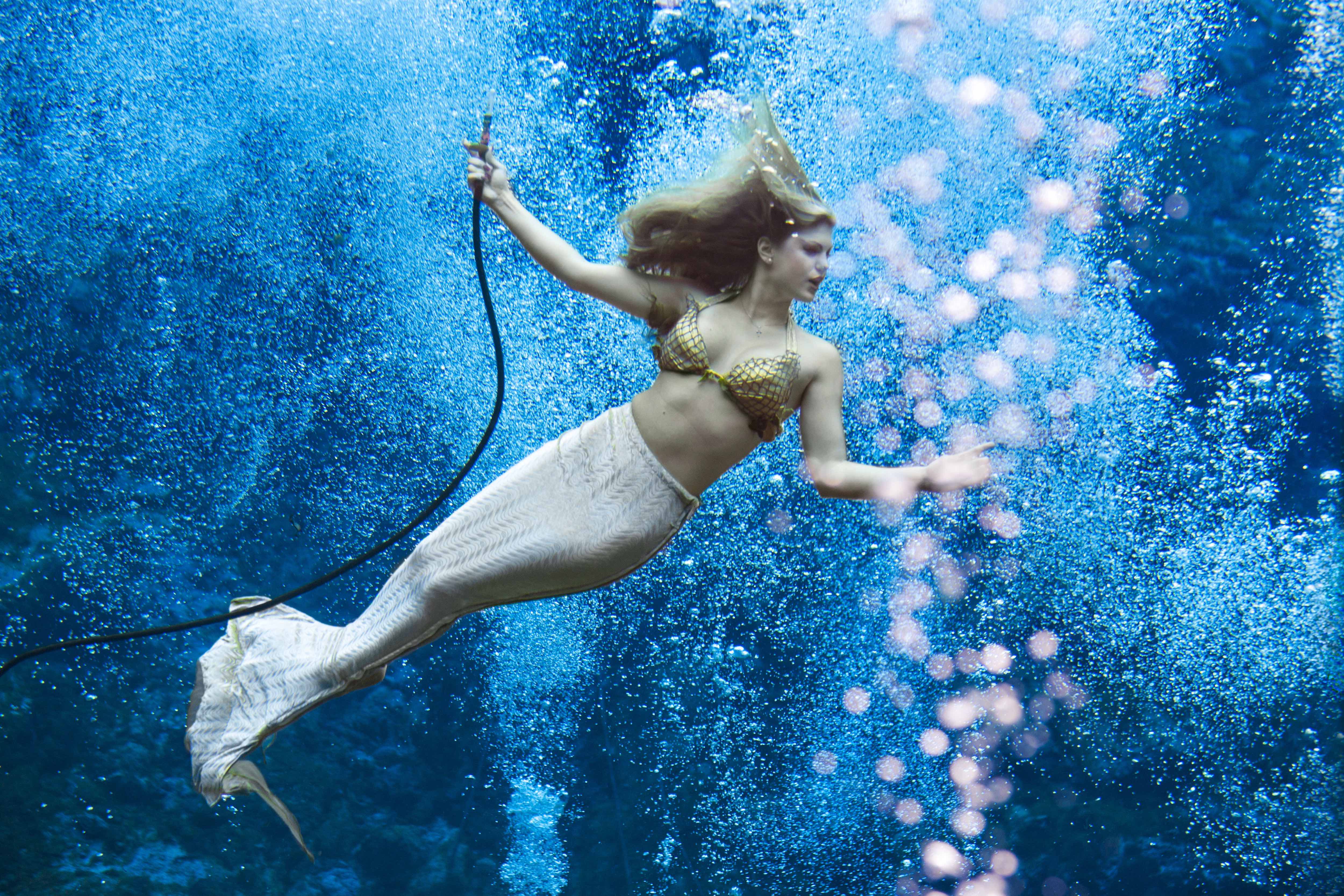 “Weeki Wachee Springs State Park. Florida, USA. 2007. Freedom is to fly, to dream, to imagine, to fulfil desires, to dare, to be yourself without limits, to think without barriers, without mandates. It is being the owner of your own body and your ideas and respecting other’s liberties.” 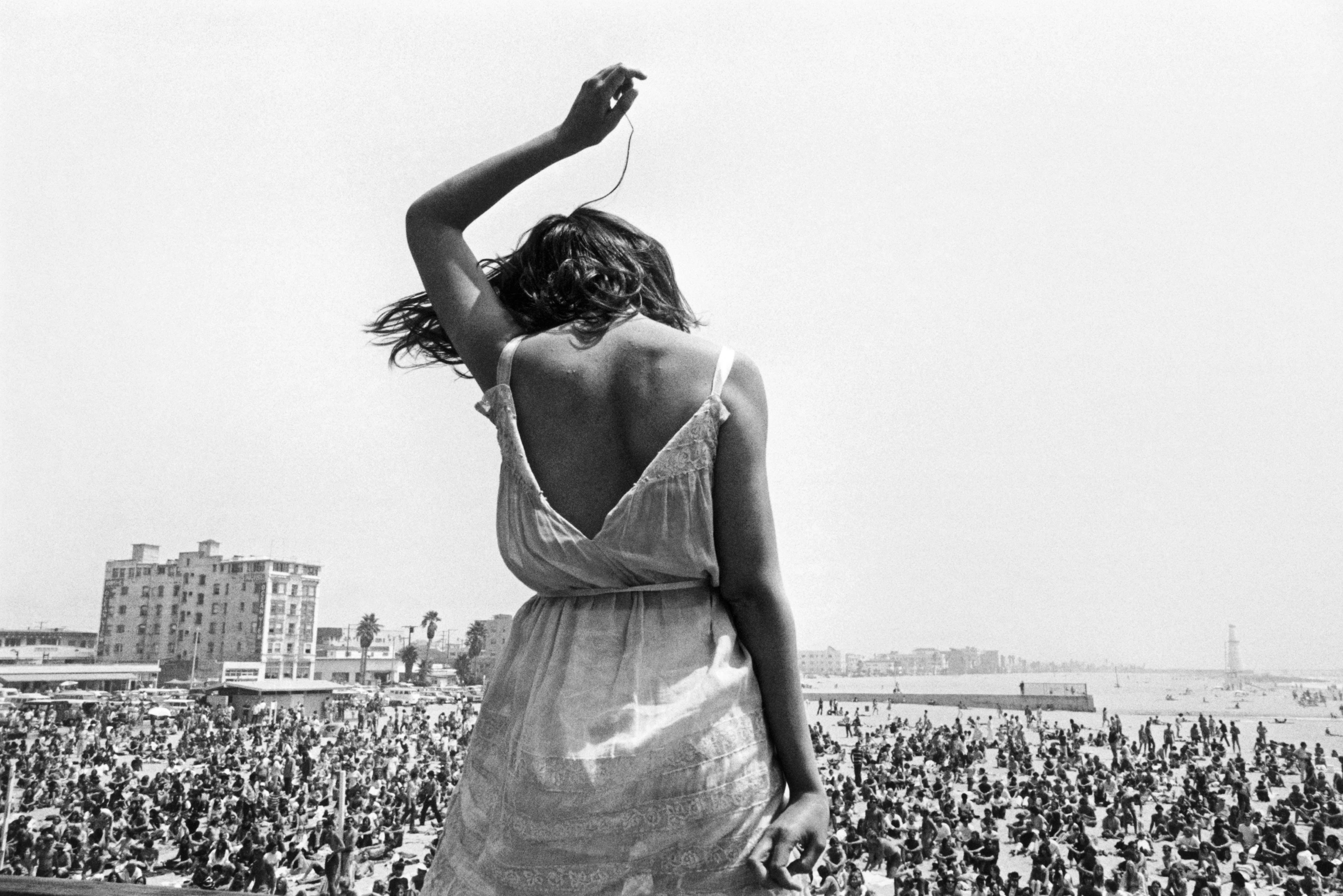 “Fifteen years since my first trip West, I have some new thoughts about gloryville. Every idea that Western man explores in his pursuit of the best of all possible worlds will be searched at the head lab-California. Technological and spiritual quests vibrate throughout the state, intermingling, often creating the ethereal. It is from this freewheeling potpourri of search that the momentary ensembles in space spring, presenting to the photographer his surrealistic image.

However, to the Californians it is all so ordinary, almost mundane. The sensibility of these conditioned victims is where it is all at, right, left, up and down. Our future is being determined in the lab out West. There, a recent trip blew my mind across this state of being, as I collected images along the way to remember the transient quality of the Big Trip.” (Preface to California Trip, Grossman Publishers, 1970) 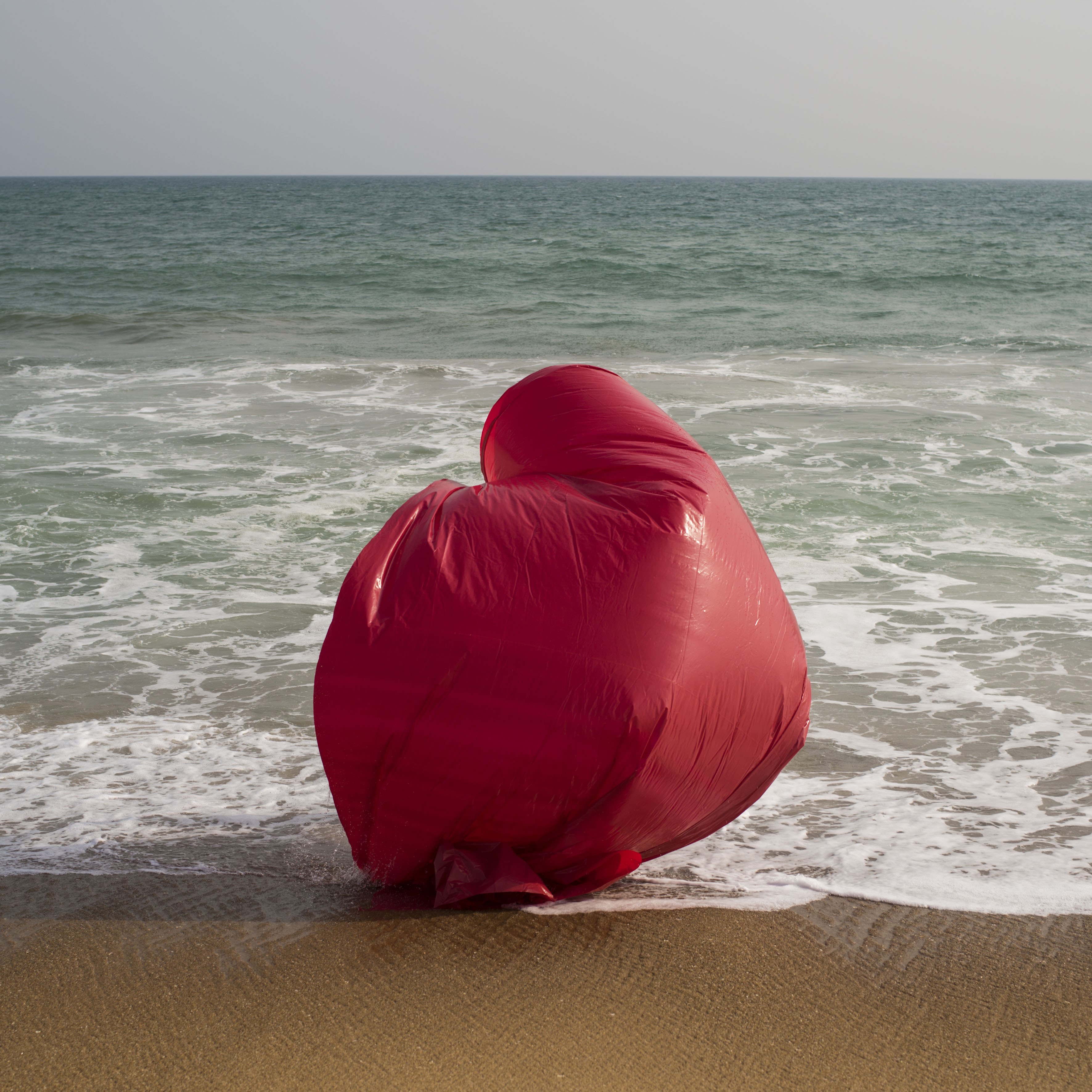 “This image was shot on the beach of Ouidah in 2016, a small town in Benin, where most slaves were shipped from Africa to America. It is an outtake from the series ‘Midnight at the Crossroads’ that I did in collaboration with Bruno Morais.

Traveling to different strategic shores, we followed the path of Legba, the Yoruba spirit in charge of the energy of life, and one who is thought to trick you along your journey in order that you may take control of your life and question everything. The different transformations of this spirit in Benin, Cuba, Brazil and Haiti, for example, are indicative of its overarching power and meaning within the history of slavery; he turned religion into a form of resistance.” 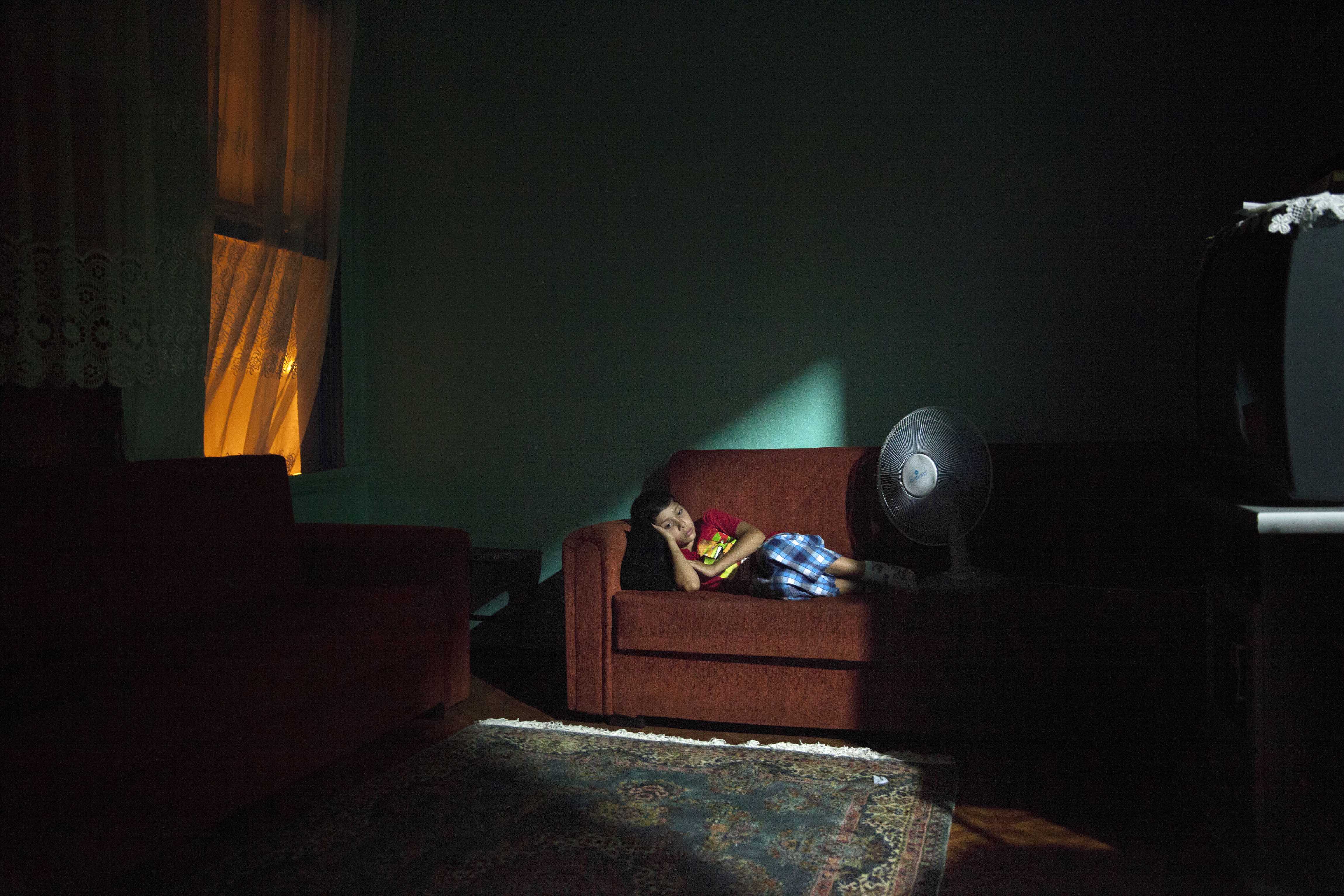 “I used to think that I was a street photographer. I pushed myself to take photos on the streets, but in a way, it never felt comfortable. I always had the feeling that I was ‘stealing’ photos from people. With Ou Menya, my project in Russia, things changed. I entered people’s homes to photograph the intimacy of families, and for the very first time, I felt both connected and at ease with the medium, as well as toward the people I was photographing.

Although I may have been physically ‘trapped’ inside the house, for the first time I felt free. The relationships I built with the people I photographed was crucial to this evolution. I now see photography as a conversation, even though we don’t often share the same language.” 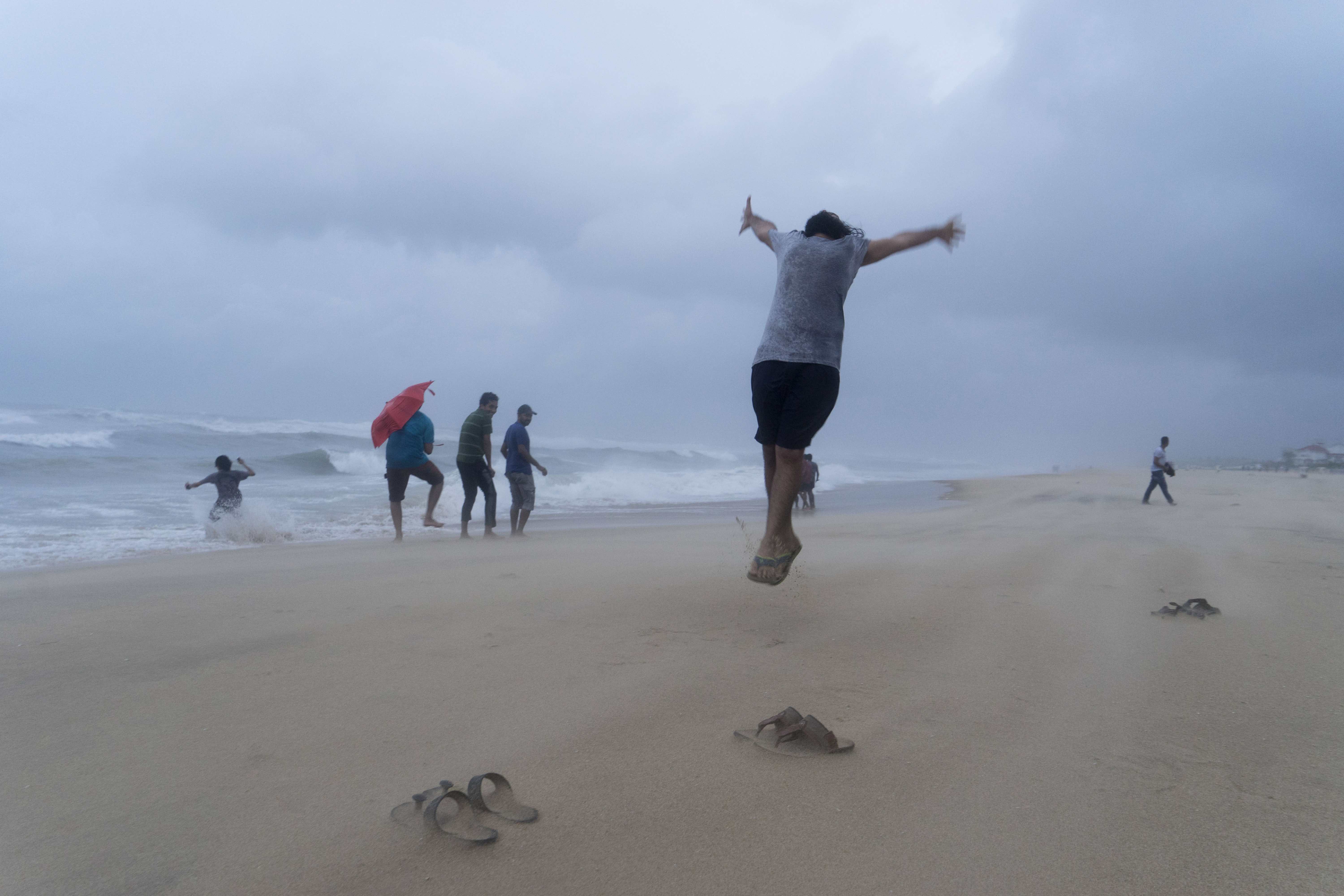 “A cyclone was approaching the coast off Chennai in India. We were in the midst of an intensive photo workshop, and most of the participants were dodging the howling rain and gusty wind.

But those who let go of everything to be part of the cyclone, had a sandy but sweet taste of Mother Nature-spiced with danger. Be part of the flow and/or the current, but know who you are. That is, to me, the meaning of freedom.”

Signed and estate stamped, museum quality, 6×6” prints from over 70 artists will exceptionally be available for $100, for 5 days only from the Magnum shop.

Linkedin
RELATED ARTICLES
OTHER ARTICLES
Photographer Arthur Grace recalls travelling through the Soviet Bloc and finding ways to evade the surveillance of his work.
In her new book, the author explores the country’s housing crisis in human terms and calls for radical action to address a broken system.
Whether it's partygate, the climate crisis or the spiralling cost of living, the fightback begins on the picket lines writes Tommy Vickerstaff
The curators of a new exhibition are hoping to shed light on Plymouth’s vibrant but often overlooked nightlife.
In the latest instalment of Photographers in Conversation, the chronicler of raves, protests and beyond explains why he’s drawn to such specifically visceral environments.
Freddie Miller’s new series of photographs investigates who today’s trainspotters are and what drives their unfettered enthusiasm.