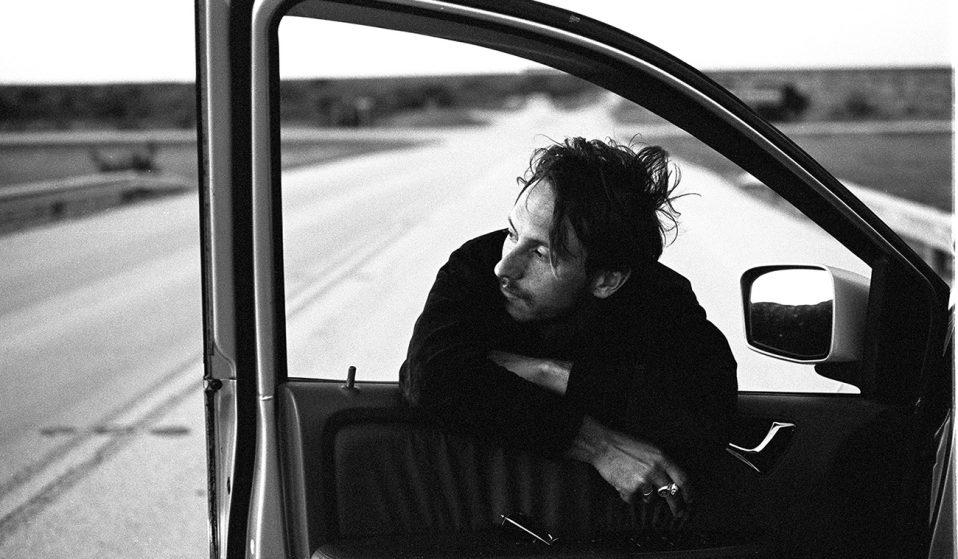 Pro skater Mason Silva is entering a new phase of his career, embracing film photography as a way to stay grounded in the present.

Mason Silva doesn’t like days off. He’s too single-minded for that. It’s what makes the 22-year-old a pro skater in the truest sense: hitting the streets of Long Beach from noon to dusk every day, scouting spots, practising tough tricks, staying out of reach for hours at a time.

“I tend to obsess about skating a lot,” he says, “and it’s hard to think about it all the time because it’s not necessarily always available to you, like when our body just isn’t physically up to it.”

A couple of years ago, Mason realised that the amount of downtime involved in inter- national skate trips actually kinda sucked. As a way to kill time, he began toying with a Nikon camera that the photographer Brian Gaberman gifted him, capturing candid moments that illustrate what a travelling life actually looks like. The interminable pauses. The empty spaces. The cuts and grazes. The countless little ways that exhaustion manifests itself. 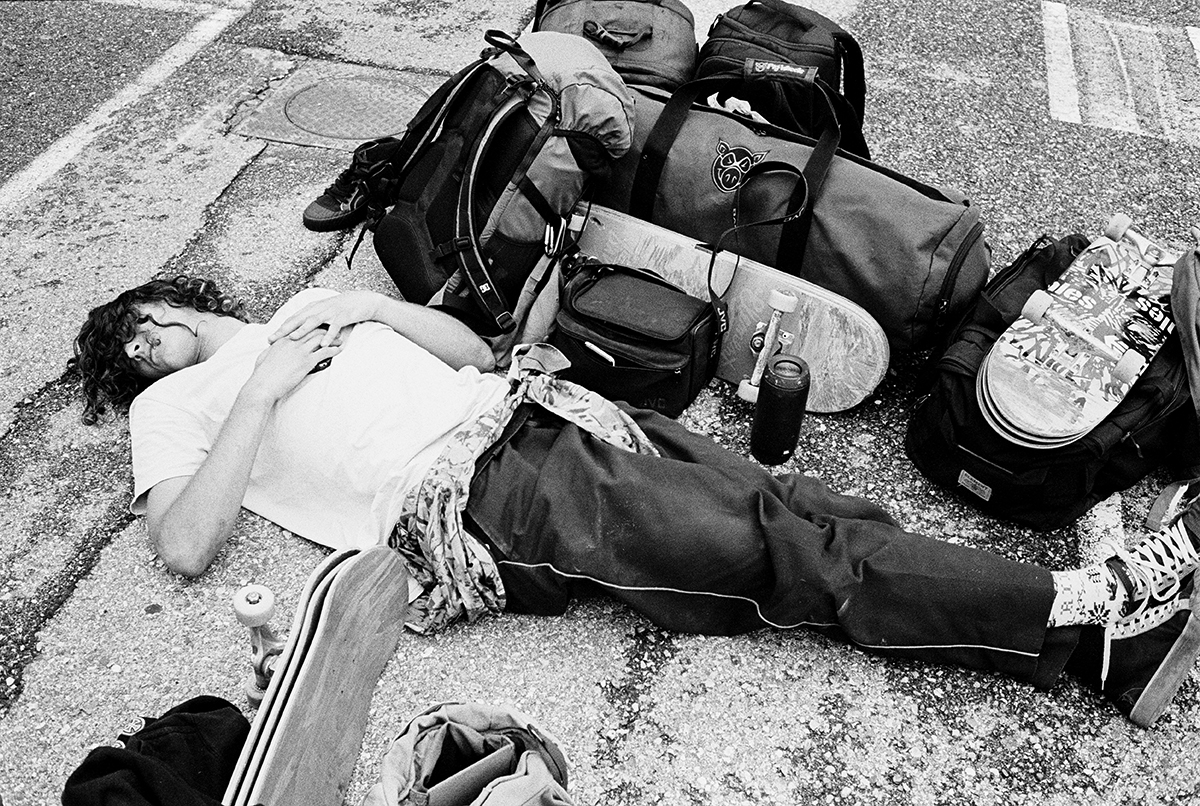 “There’s no glamour to it,” he says, break- ing into a laugh. “People might think we’re skating all day – occasionally stopping to have catered food – when in reality you might be sitting on a kerb, eating sandwich meat, talking shit to your friends as you wait around for hours. But the other thing is that we’re always in odd areas, slightly off-grid, where there are so many random situations worth documenting.”

Mason is a man of few words. There’s a precision to everything he says, a mellow sensibility that prefers to keep things simple. Growing up among an athletic family of four in Manhattan Beach, California, he first got into skate videos at the age of seven and later began filming his first tricks outside the house. Over time, the editing process – the figuring out of what works in a part and what doesn’t – ended up influencing his skating as much as anything else.

Getting into analogue photography stirred up a similar knack for attention to detail. When fellow skater and photographer Ray Barbee taught Mason to develop his own negatives at home, he realised that the pro- cess offered a familiar sense of freedom and creative control from start to finish – a perfect outlet for whenever he struggled to get his mind off skating. 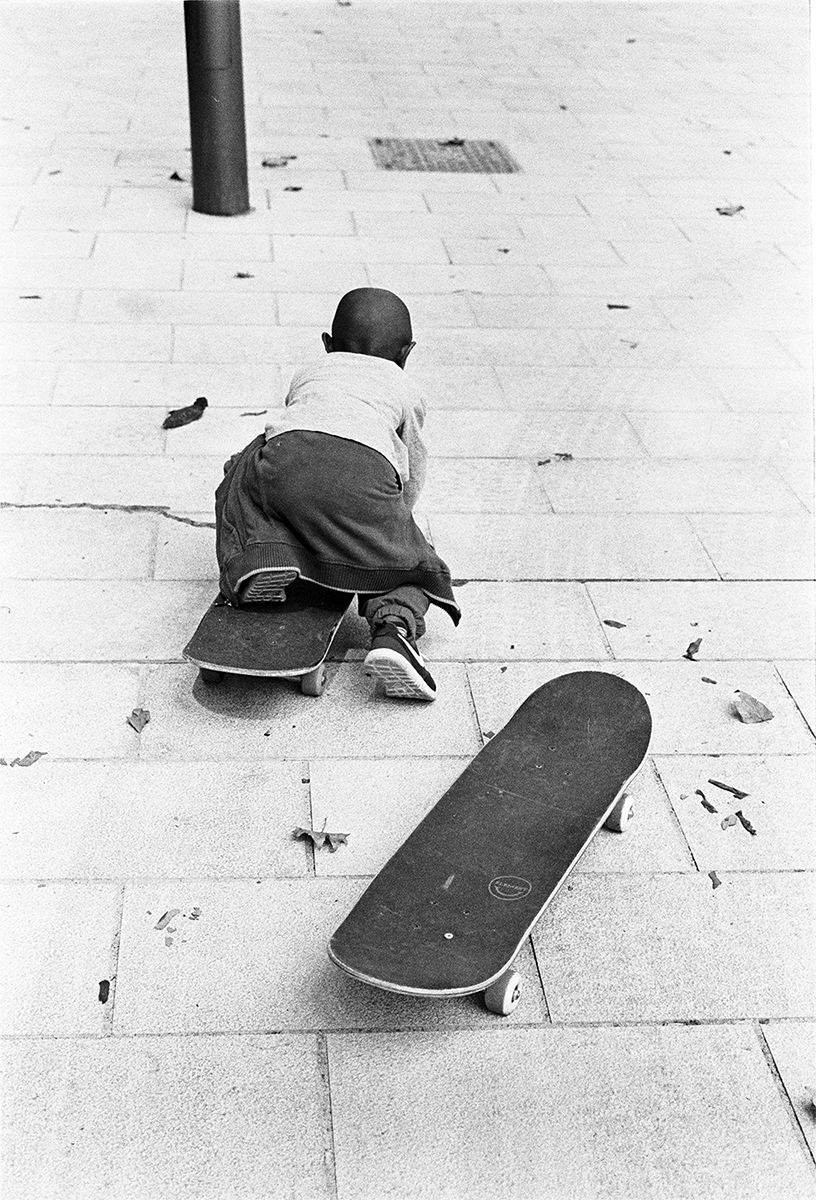 “By no means do I know what I’m doing – it’s a constant learning process,” he says. “But I think skaters naturally have an eye for things that look visually pleasing because the right skate spot has to be perfect not only in practical terms but visually, too. It has to look good for the footage, so we’re always searching for interesting things that will translate within the frame.”

That attitude has drawn Mason into a community of like-minded skater-turned- photographers. Figures he looked up to – like French Fred and Ed Templeton – have become valued sources of wisdom. They also tend to recognise the value of broadening your horizons in an industry known for grinding people down and casting them aside the moment they cease to be useful.

It’s a side of the business that feels increasingly harder to ignore, given the number of skaters who rose to the top only to become cautionary tales. This interview takes place just days after British skater Ben Raemers took his own life at the age of 28 – and Mason is quick to acknowledge the need for skaters to be more mindful of the path ahead of them, particularly one with so many pitfalls.

“Sometimes I think that therapy should be mandatory,” he says. “Mental health gets joked about way too often between skaters and it needs to be taken more seriously… You never know where skating will lead you, so you have to try to keep a level head.” 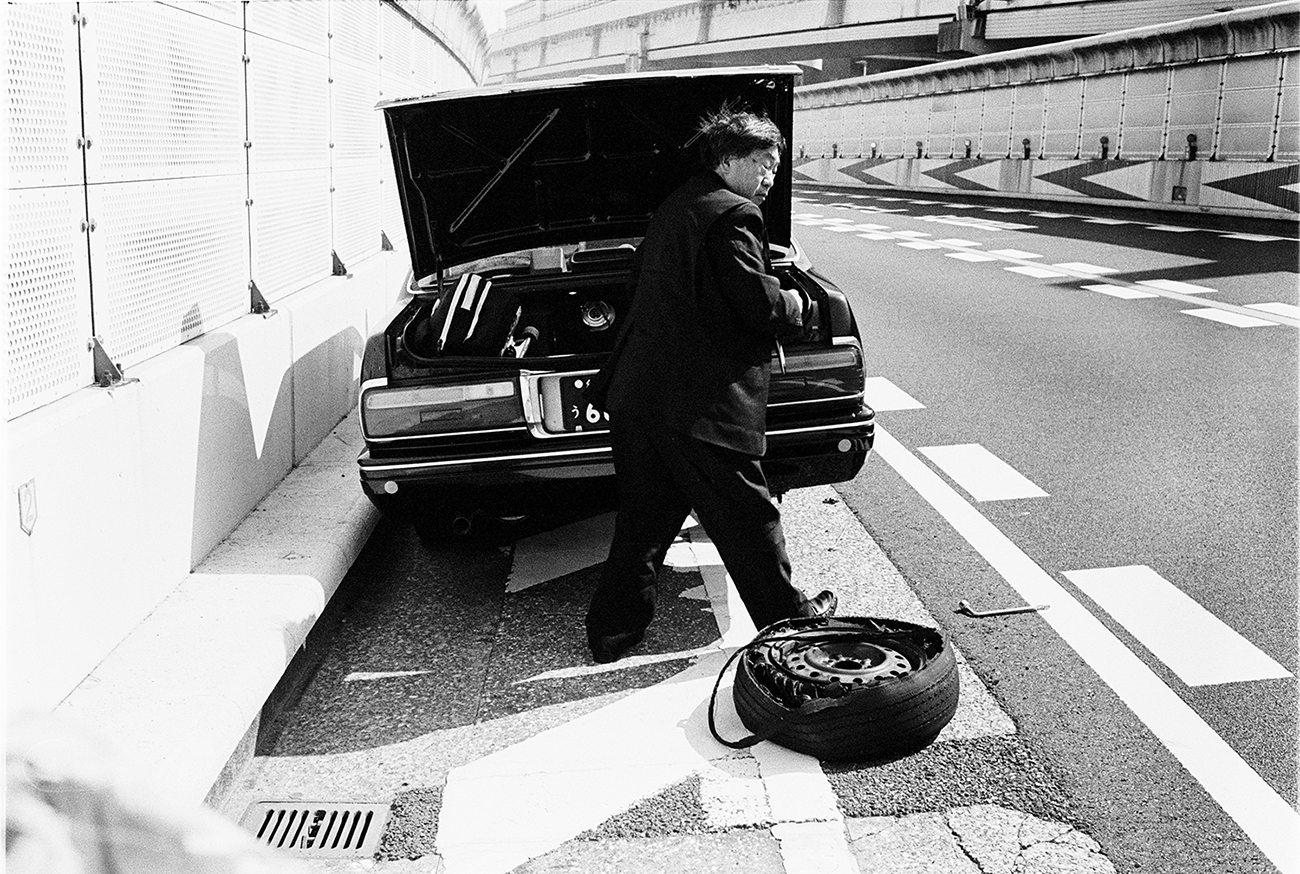 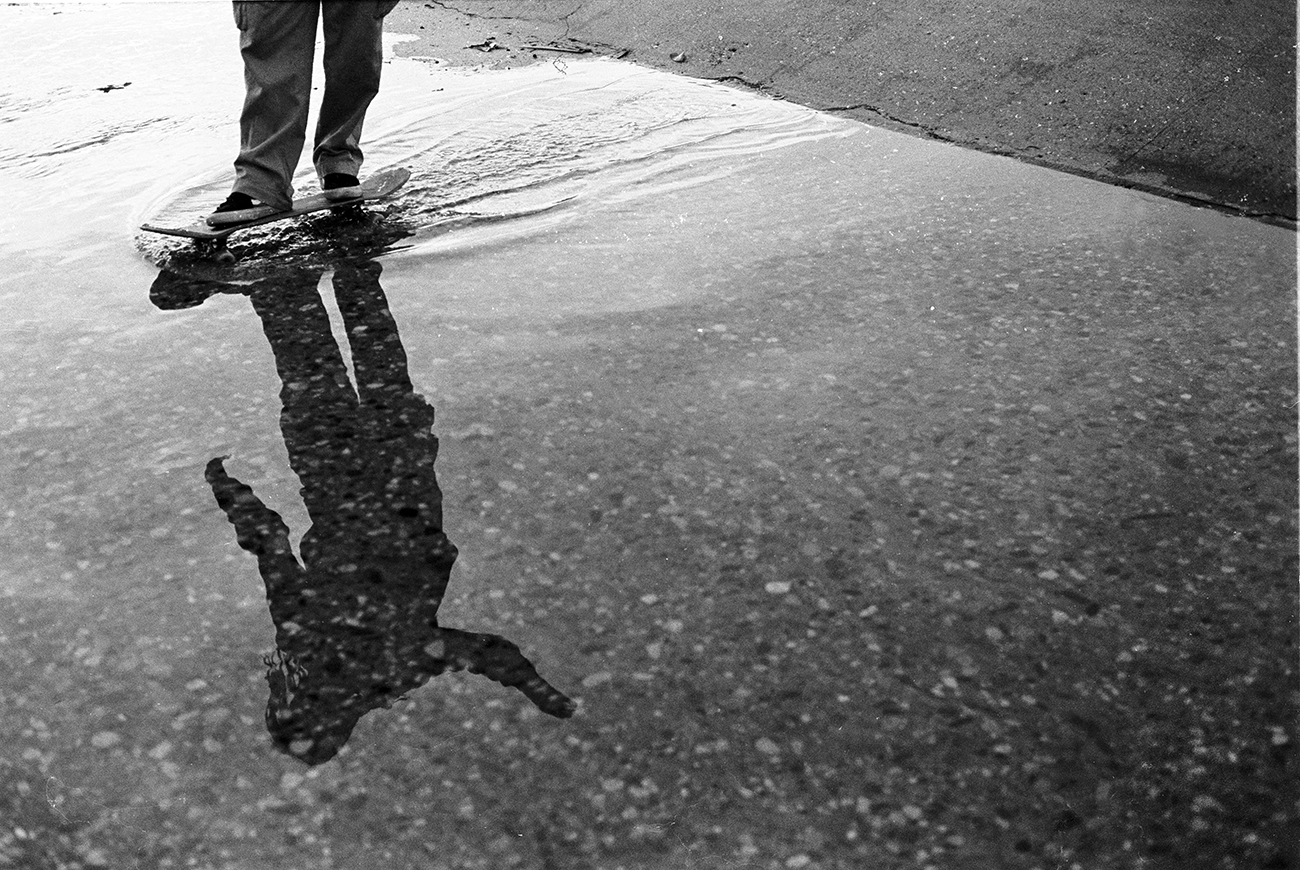 Mason is embarking on a new phase of his career. In January, he stunned the skate industry after deciding to part ways with Element, his board sponsor since the age of 14, even though he had no replacement lined up. But that relative uncertainty, he feels, is balanced out by a newfound sense of independence and an ability to make the most out of the present.

“The whole reason I got into shooting film was documenting my friends on trips, the good times I want to remember forever,” he says now. “And when we go on those trips, we’re not thinking about anything else but where we are, what we’re doing and who we’re with. It’s an easy time to have a clear mind and I think that’s one of the greatest things you can have in life: a point or a moment where you don’t have to think about anything else besides what’s happening in the now. Just recognising that feels good.” 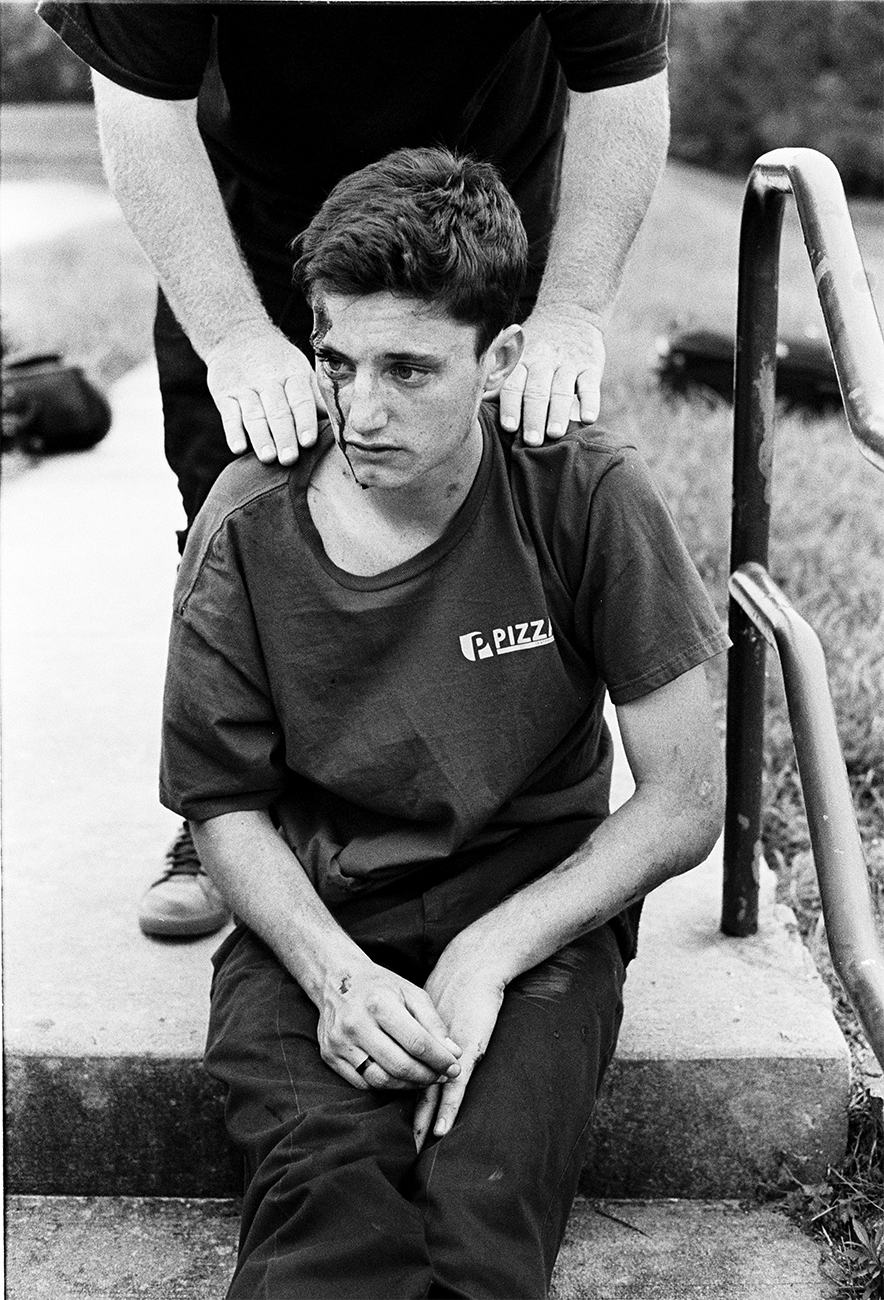 Linkedin
RELATED ARTICLES
OTHER ARTICLES
After fleeing the war in Ukraine, people are finding it impossible to secure affordable and decent housing in the UK.
After blocking the Scottish government’s gender recognition reform bill, Westminster is now devising further changes to the law to make it harder for trans people to self-identify.
Campaigners reflect on what the supreme court’s decision to allow buffer zones in NI means for the future of reproductive rights in the UK.
Mass crustacean die-offs in the North East have led a community of fishermen to take action to save their seas.
After building his reputation covering the US civil rights movement in the 1960s, the photographer went on to produce some of the most enduring images of the past century.
A new podcast is opening up the conversation between trans women and trans amorous men in the hope of building coalitions.