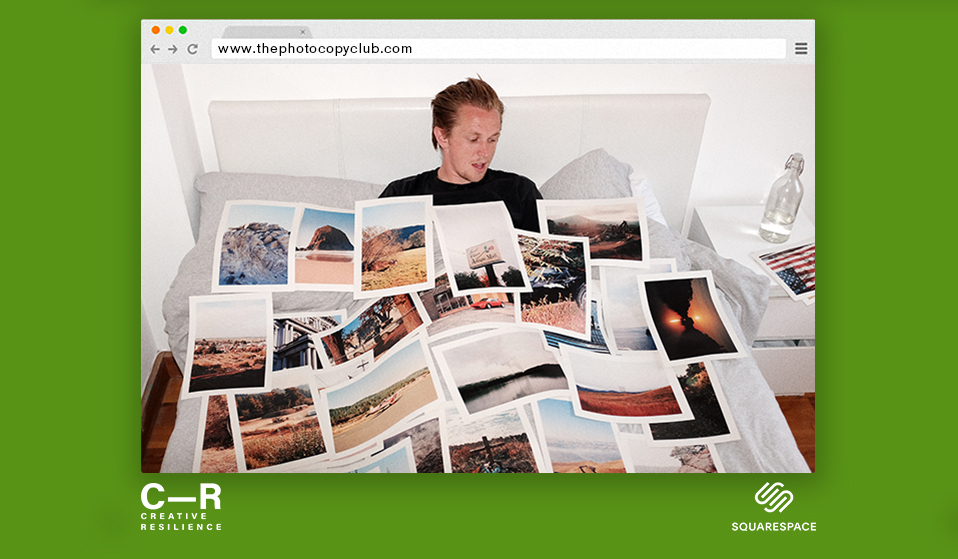 In the latest instalment of Creative Resilience, we profile Matt Martin: photographer, curator and founder of The Photocopy Club.

Surviving the perils of being a freelancer is tough – now more than ever. In partnership with Squarespace, we’re supporting independent artists to create original work that responds to these testing times. Here, photographer and curator Matt Martin tells us how he uses photography to build community.

You can usually find photographer and curator Matt Martin at the PhotoBookCafe. Situated on a (normally) bustling corner of Shoreditch, London, Matt’s base is both a gallery space and caffeine vendor; before the Covid-19 pandemic, it was rapidly establishing itself as a temple of photographic practice in a layered corner of the English capital. “It was great to be able to meet so many photographers and artists face-to-face, as well as to have so many amazing photo books at hand,” he says. “Those days can’t come back soon enough.”

Even with the strictures imposed by a long and convoluted London lockdown, the PhotobookCafe – which was started by Rapid Eye’s Lee Williams – is hanging in there as a point of perennial creative resilience. The place acts as a drop-off and pick-up point for Rapid Eye – the photo lab up the road – which has darkrooms and colour facilities that cater for a whole range of photographers. But as well as providing an inspiring and comfortable place for people to share their work, Matt uses his space as a hub for the community that is The Photocopy Club. 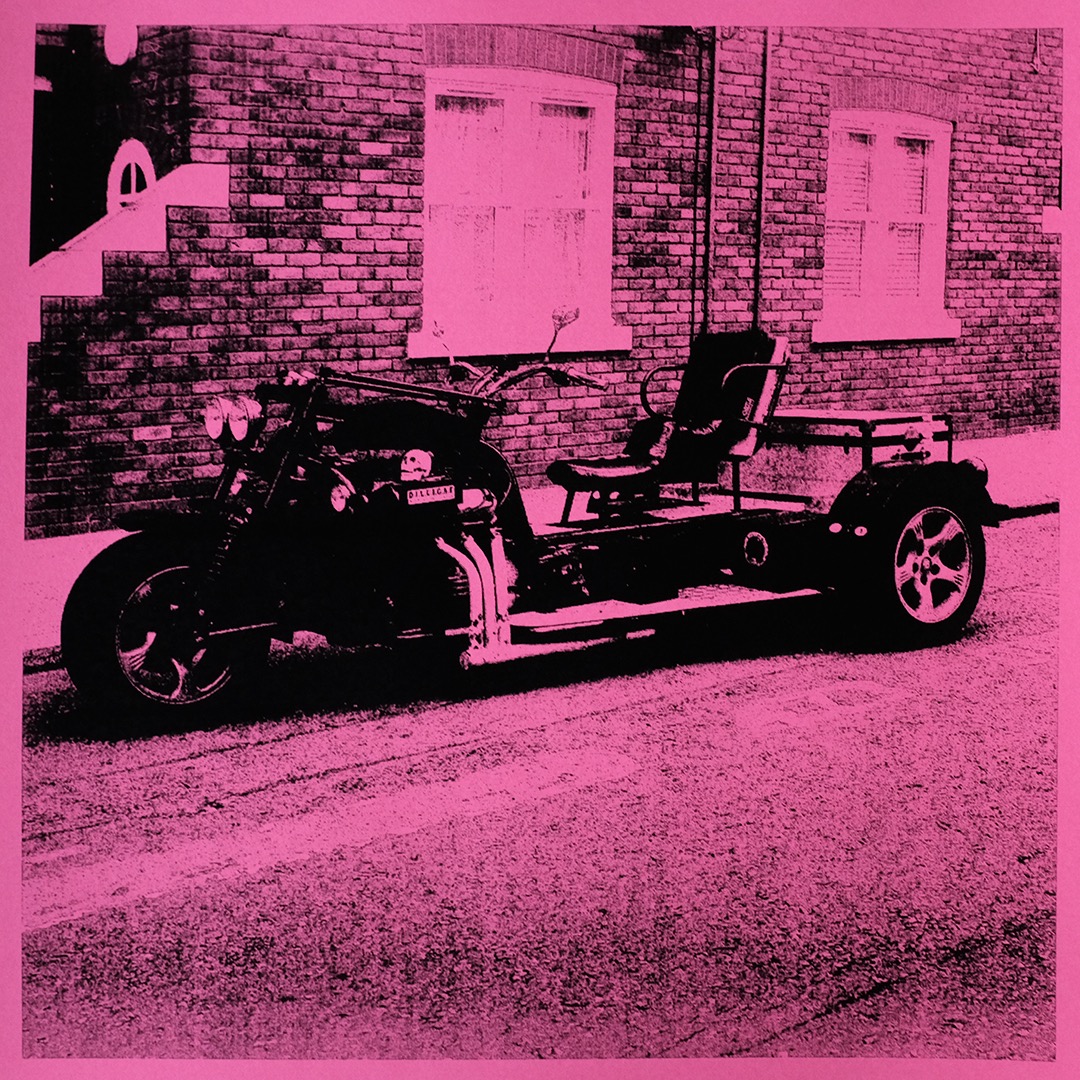 “The last few months have been a weird one in terms of making work. I’m so used to being on the road in one shape or another. Always planning the next trip. My last few projects have bounced around shooting between London and the states.”

The Photocopy Club is a collective of visual artists, photographers and zine makers who, since 2011, have been building community through creativity. “The idea with this club was to make an open exhibition, where it was completely affordable to everyone,” says Matt, who honed his curatorial chops at Ken Flaherty’s Doomed Gallery – which, until its closure in 2018, occupied a space on Dalston’s gorgeously chaotic Ridley Road. “At Doomed I learned so much. We were able to give a platform for artists who used photography. The Photocopy Club is a way of extending that ethos – a way to make photography tangible and to support the creation of innovative and intriguing work.”

The idea itself is simple. You print your photographs on a photocopier, any size you like. You sign and date the back of the print and send it in to Matt. Then he shows the work at a Photocopy Club group exhibition. Everyone is on the same level playing field, as no one knows who the artists are. Punters buy the work for £5 purely on the image they see on the wall – not the strength of the name attached to it. 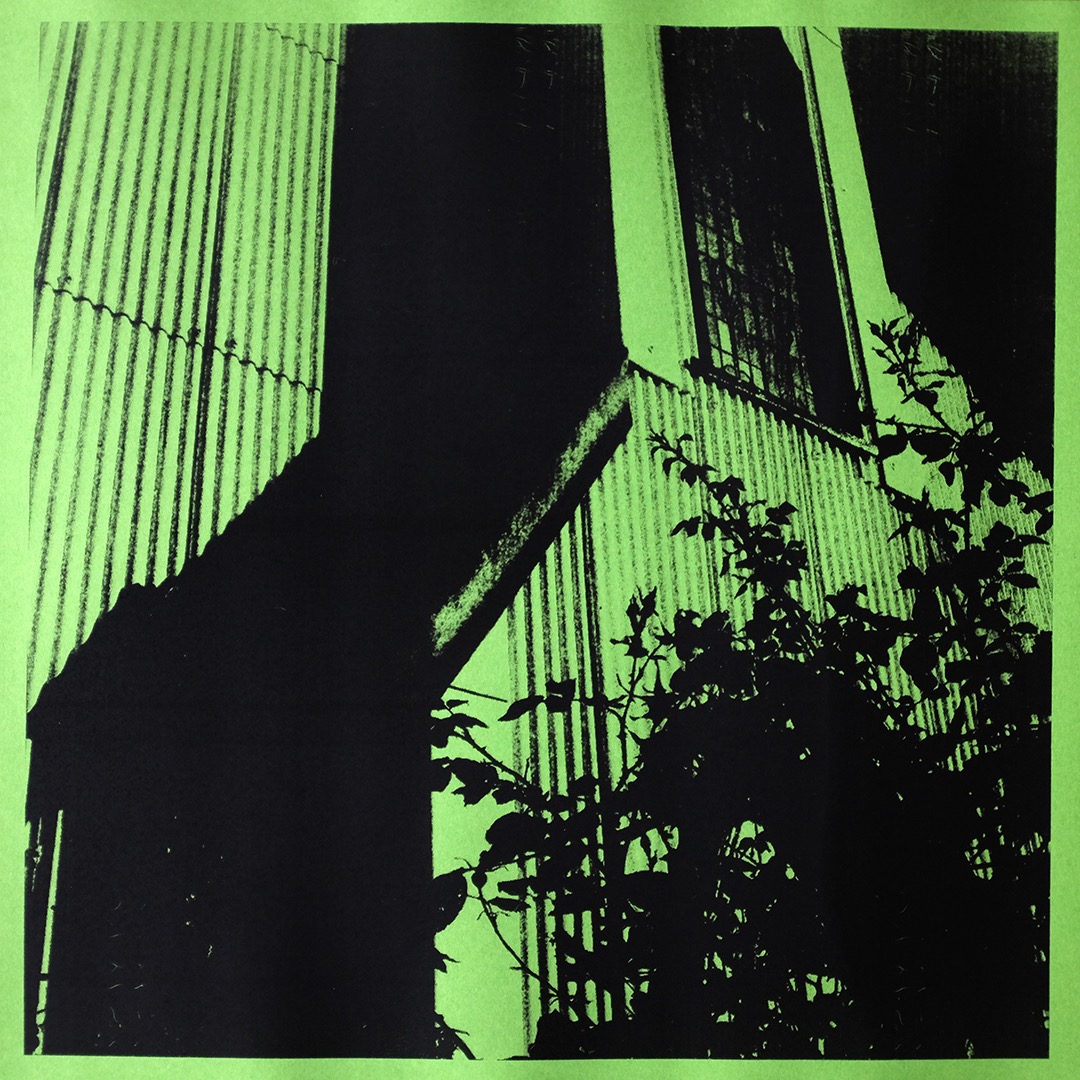 ”Shooting in London for me has always been more about details. I wanted to expand on the work, not just as a xerox print, but using the square format, making the images work graphically, like designing a record sleeve.”

In this sense, The Photocopy Club is a democratising force. But it also helps answer a question faced by many aspiring photographers: how do you share your work without it getting lost in the digital cacophony? “Printing your photograph makes the work itself tangible – but it also feeds back directly to the process of photography itself,” Matt says. “Putting your photos through a process you’ve never used before and then being included in an exhibition – in London or Poland or Berlin – the effect of all this changes the work itself.”

Matt grew up in Devon, in England’s West Country, and began taking pictures at further education college. But he eschewed an academic route in favour of the bump and hustle of the market, instead placing himself right in the centre of mass photographic culture – AKA the high street photo chain Snappy Snaps – where he was able to access unlimited printing and development facilities. “I ended up making these little booklets where I would staple together my stuff because I didn’t really know anything about things like In-Design,” he remembers.

“I have always photographed old classic cars around the city, but to combine this with architecture and detailed photographs with a link to the American landscape was something I had not done before.”

This was at the turn of the century, meaning that Matt was at the heart of an explosion that saw the rise of sites such as Tumblr and Blogspot: web platforms that facilitated photo sharing across time and space. He was into skateboarding, punk and surfing – cultures built on photography and film – and, thanks to the emergence of these digital communities, was able to meet like-minded people, with whom he could share ideas and work.

It’s this idea, of far-reaching creative bonds, that motivates him today. Despite the Photography Club’s emphasis on the material, Matt is clear that it wouldn’t – and couldn’t – exist without the power of the internet: for him, that is where the initial connection is built. The Squarespace platform in particular has been integral in helping Matt foster connectivity. “It has enabled us to really demonstrate what we do and to inspire other people to get involved,” he says. “The Squarespace platform takes the things those early platforms did to the next level. It allows you not only to curate your own work, but it’s easy to adapt the site as the work progresses, [which] of course opens your work up easily to feedback. And that is golden.”

The Photocopy Club has had a freeing impact on his own, personal work, too. “Once I realised that curation, book-making, running workshops and doing bits of education was the side of photography that I really loved, I realised I could actually just photograph what I wanted to most, which was landscapes and documentary-style work,” he says. “That completely freed me up.” 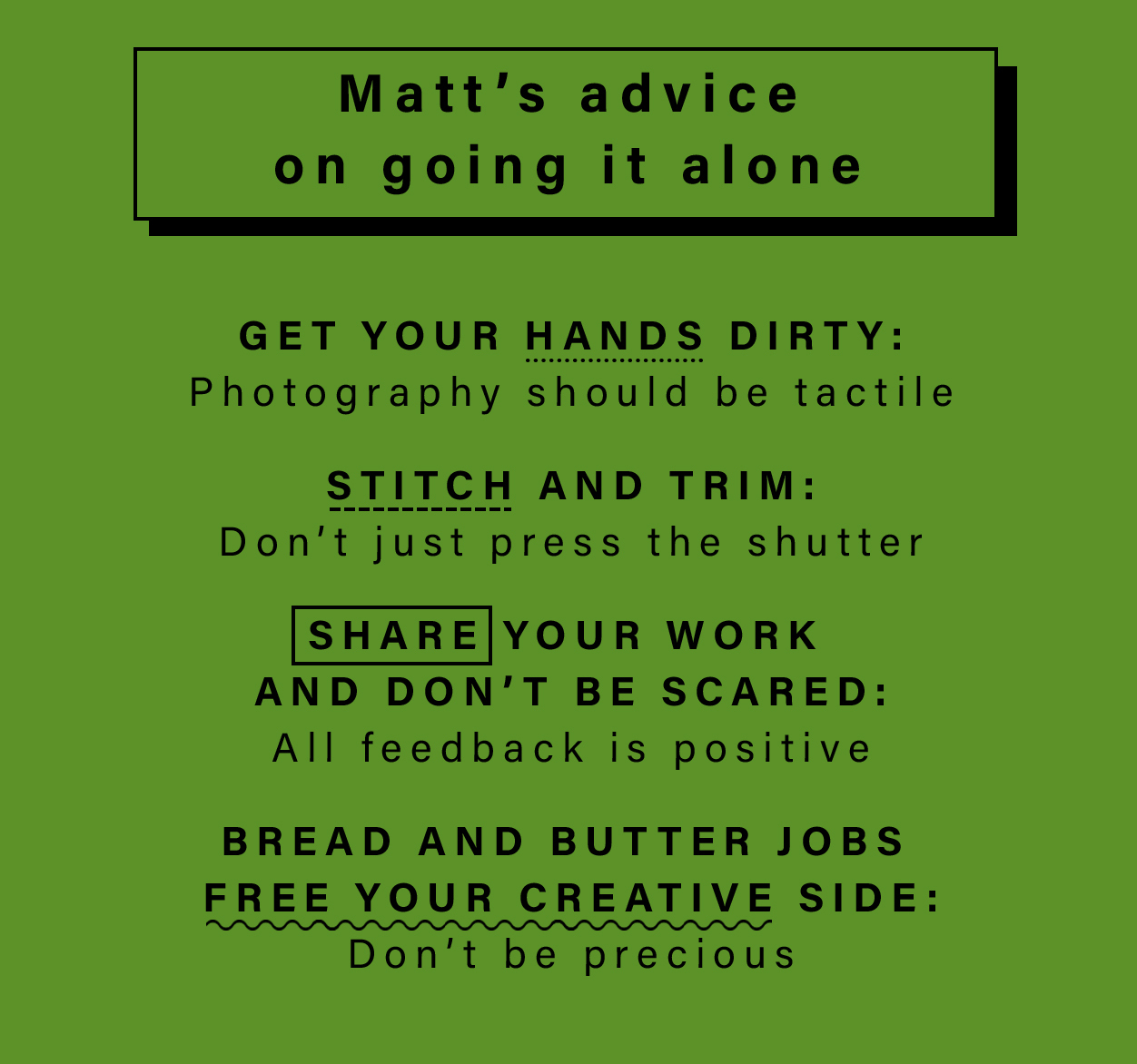 His most recent project, American Xerography in Colour, launched just before the pandemic took hold. It saw him driving around the U.S. for two months, making solely colour landscape work. “The aim was to try and make something that could sit amongst Robert Frank and Lee Friedlander, and be a document of a particular view of America. It was 35mm colour film photography, printing everything on a colour xerox, scanning that in and then printing it big.”

Matt has seen first-hand how photography can bring people together. Which is why The Photocopy Club is about making photography accessible to everyone. For him, it’s a case of providing the opportunity for connection and collaboration to anyone who wants it, creating communities at a time when they’re more important than ever.

“The timelessness of a photograph is really important to me – and community is so important to people,” he says. “It’s about being able to gather images and capture them tangibly, and to build groups of people who come together to share this timelessness. History doesn’t exist in statues, it doesn’t exist in the news or what governments are telling us. It exists in the books, in the documents we make and preserve. It’s this moment in time that’s so important, and we all share that given moment… that’s what The Photocopy Club is all about.” 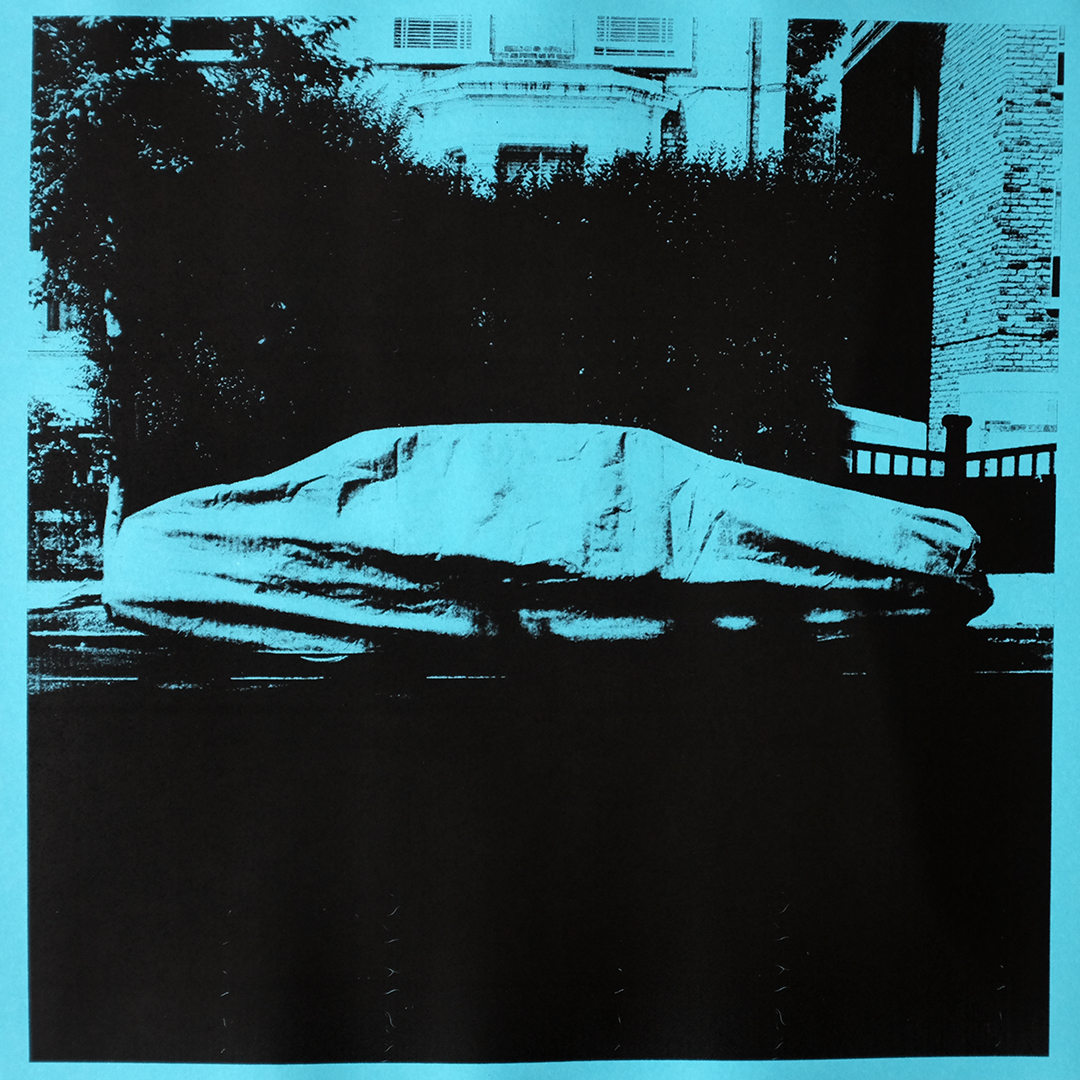 “Once you start searching for something it’s all you see. Every turn, down every small street you can find little pockets of American west scattered around Hackney.”

Matt Martin and all of the creatives featured in our Creative Resilience series use Squarespace as an easy and affordable website builder to get their work out there in a beautiful way. If you’re thinking of sharing your own vision with the world, start building your Squarespace website today with a free trial – no credit card required! Use the discount code HUCKMAG when you’re ready to go live.

Linkedin
RELATED ARTICLES
OTHER ARTICLES
As the Scottish government announces a rent freeze, an activist with Living Rent who fought and won shares how they did it, and what must come next.
A group of young Palestinians have found temporary freedom in the act of parkour, reimagining wreckage and ruins as a series of high-octane playgrounds.
A 37-year-old woman shares how her abortion led her to become a clinic worker, and the abuse she’s received in that role.
A new project is documenting formerly incarcerated people as they transition back into civilian life.
Rogue landlords are exploiting young and inexperienced renters and leaving them in mental and financial turmoil, reports Niall Hignett.
In his 2008 series, the photographer pictured himself as Angela Davis, Martin Luther King Jr., Malcolm X, and other prominent figures.