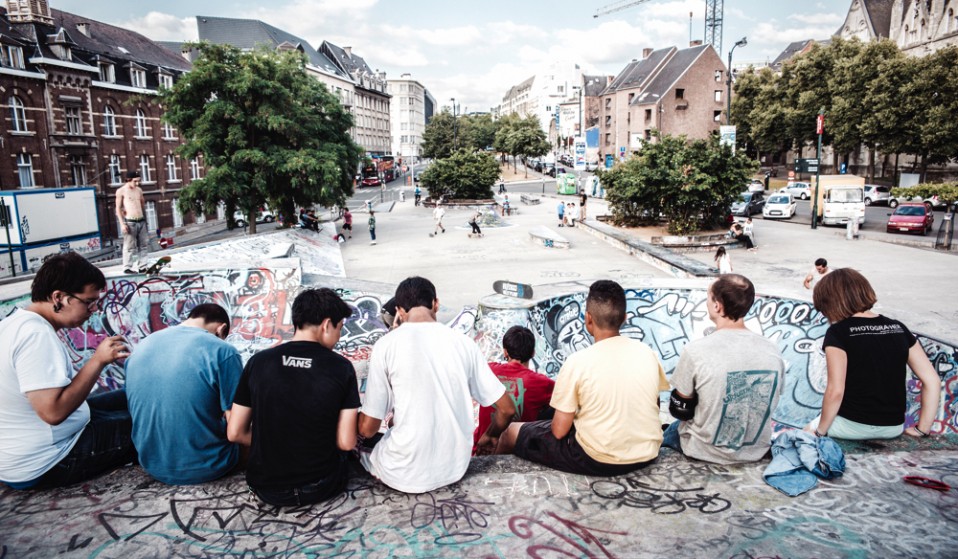 The media has painted Brussels as a city of immigrant ghettos, intolerance and radicalisation. But at Les Ursulines skate park, kids from all backgrounds skate together in peace.

The media has painted Brussels as a city of immigrant ghettos, intolerance and radicalisation. But at Les Ursulines skate park, kids from all backgrounds skate together in peace.

Armed police raids on suspects connected to the Paris terror attacks have put Brussels under the spotlight. If you believe what you read, the Belgian capital is the poster child for failed integration: a divided city of immigrant ghettos, no-go zones and Europe’s radicalisation capital.

But when Italian photographer Giacomo Cosua arrived at Les Ursulines skate park in central Brussels, he found a very different story. He met kids from all different backgrounds, coming together to skate and hang out.

Music, skateboarding and the kids’ punk attitude to life proved stronger than the cultural, racial and religious differences that many would expect to drive them apart. 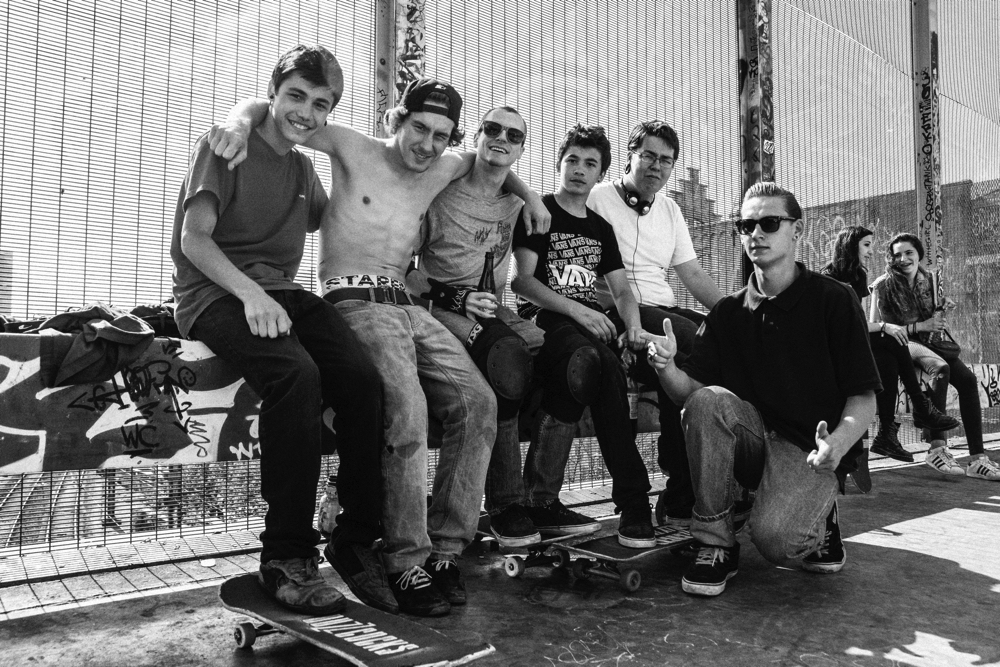 “I’d never seen a skatepark with this kind of environment, with kids coming from such different backgrounds,” Giacomo explains. “At home in Italy and while I’ve been travelling, I’ve seen a lot of skateparks but none with so many different cultures. It was super cool to see a Moroccan girl with a hijab skating alongside other kids from first and second generation immigrant backgrounds.

“As the home of the EU, Brussels is one of the symbols of the European community and for me this skatepark really showed what immigration and integration means,” he continues. “There’s no common religion or language or background, the only common thing for these kids is having fun and skateboarding. Nobody told them how to integrate, they just have skateboarding and the friendship that brings.” 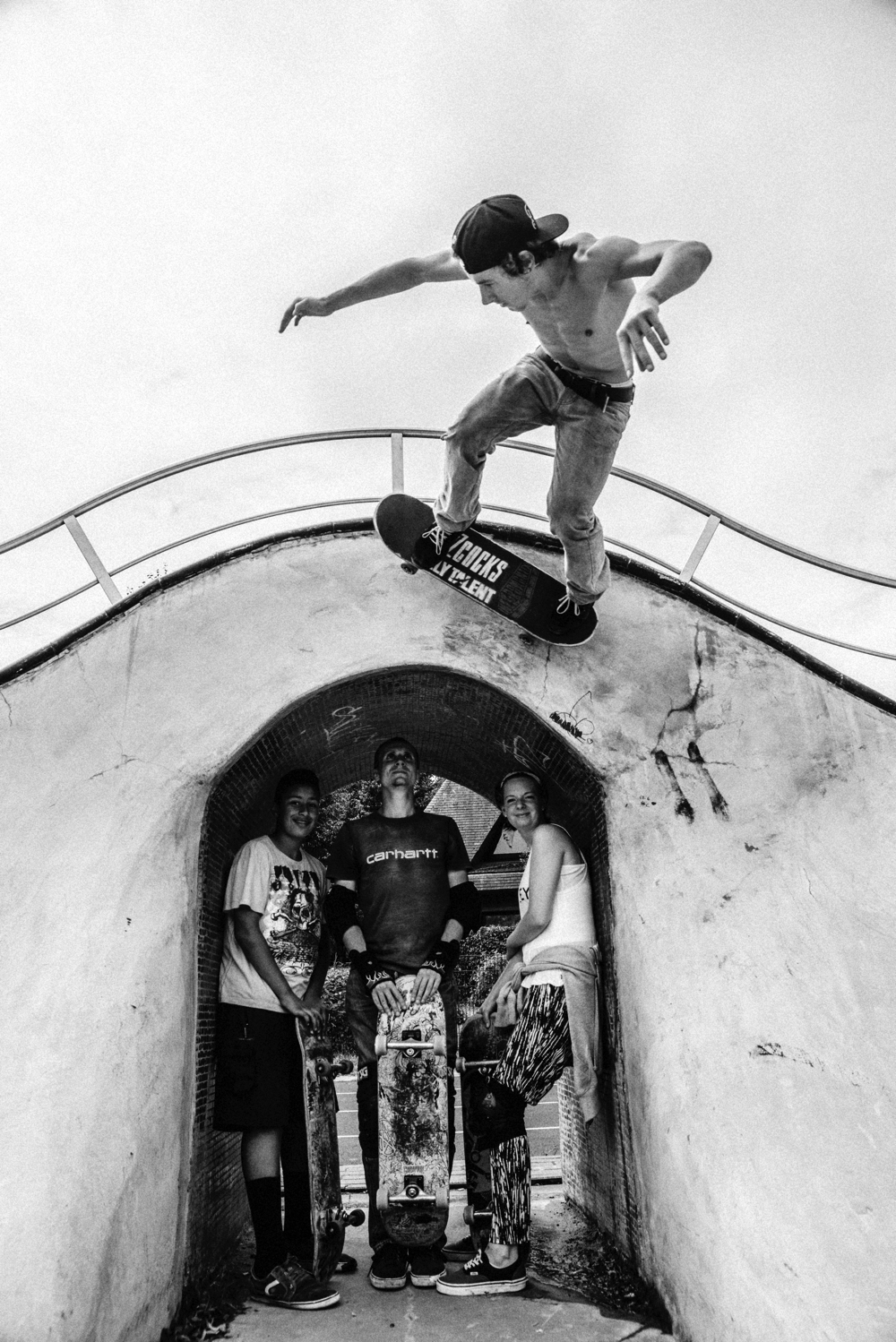 Over a month this summer, Giacomo spent time getting to know the diverse crew of skaters from across the city who’ve made Les Ursulines their home. Here are some of their stories. 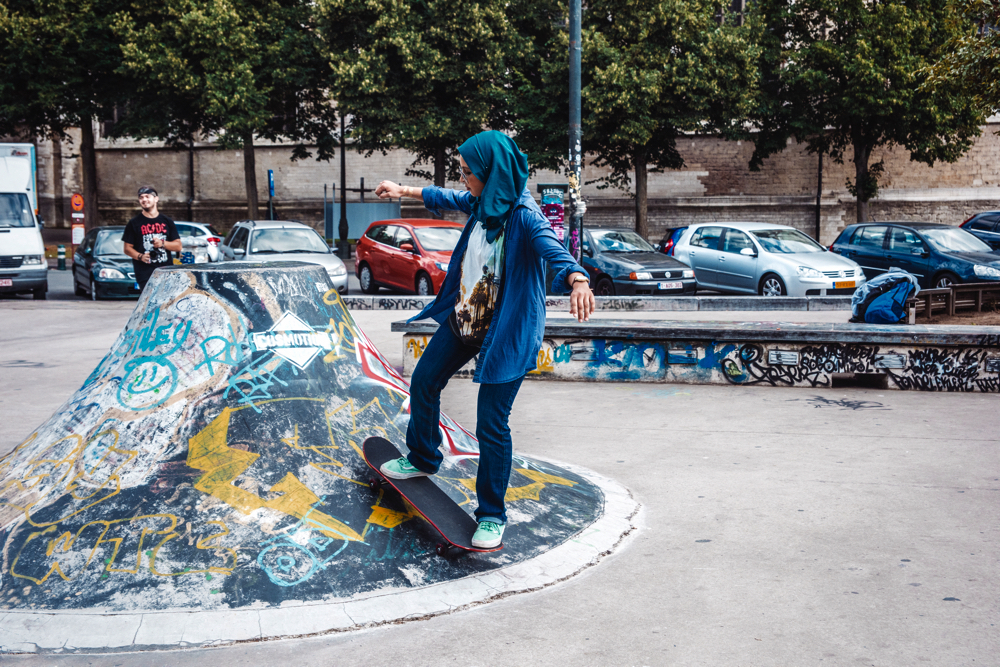 Fatima moved from Casablanca, Morocco to Brussels three years ago to study landscape architecture at Gembloux Agro-Bio Tech – Université de Liège. “Thanks to skateboarding, I was able to open my eyes about many different aspects of life, in particular to be integrated in this society,” she explains. “Our group of skaters is multi-cultural and there is no prejudice. To be part of this group is something that makes me happy, and I think it shows a good message to the rest of society”. 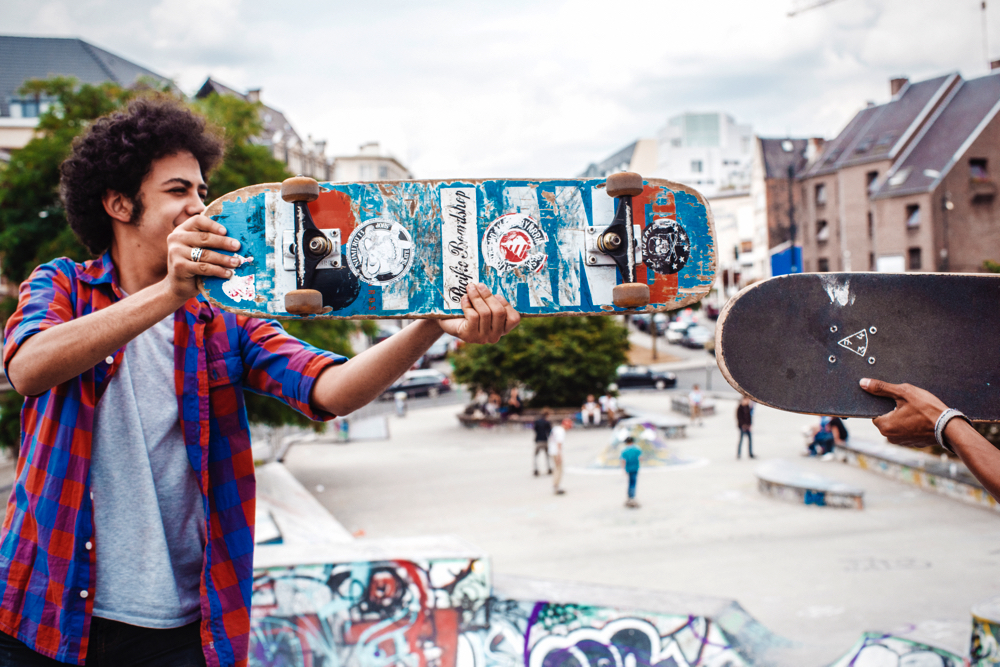 Ramy’s mother is Moroccan and his father is Egyptian but he moved to Brussels from Barcelona two years ago. “When my family moved to Brussels I didn’t know anybody here, I didn’t have any friends,” he remembers. “But one day my life changed: it was when I found a skateboard in a flea market and started to practice at Des Ursulines. After a few weeks I met some guys there and now they are my friends. We go to the skatepark almost every day or cruise around the city with our skateboards.”

Giacomo explains, “These kids grew up in the streets. Their references are music, skate and punk. They’re a new generation who wants to keep this culture alive. It’s totally connected to being rebellious, and for sure they do crazy things.” 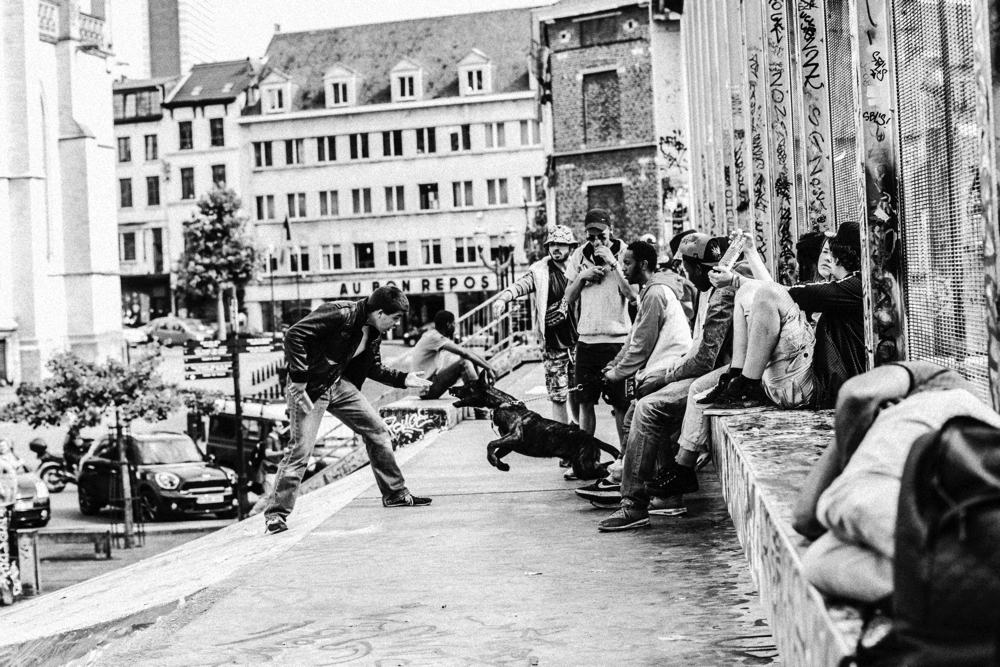 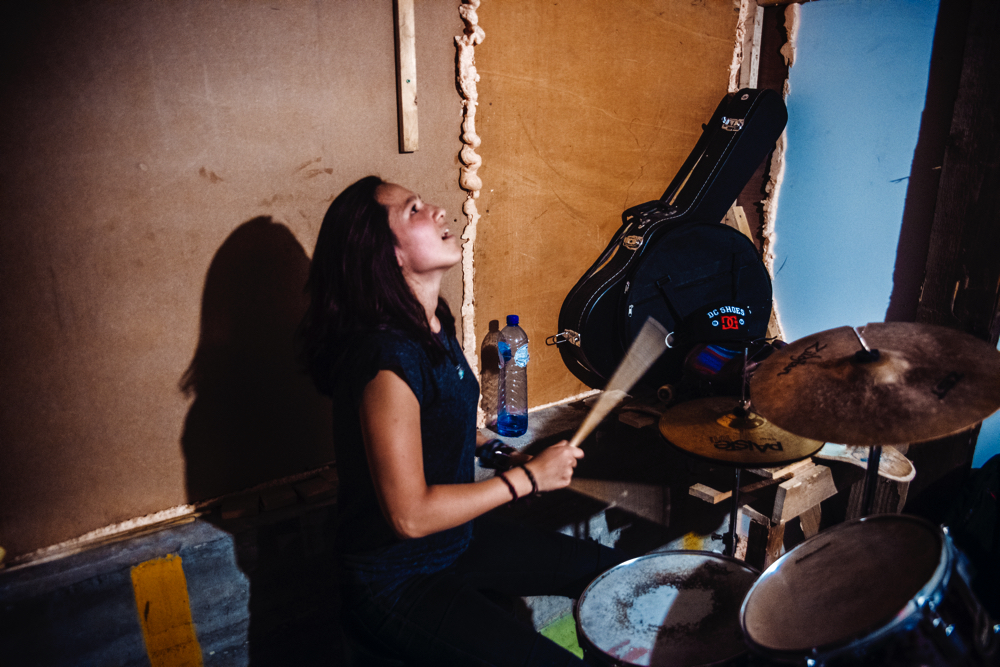 Daniela was born in Brussels but her family is Bolivian. Together with other kids from the park, she plays in a band called Rumble Pit. “Music is really important for them,” Giacomo explains. “Like skateboarding, music was one of the things that brought them together. They listen to the Smiths, the Ramones, Joy Division, etc. You might not expect it from kids so young, but if you chat to them about the Clash, they know what they’re talking about because it’s the music they play together. They practice at a space in a big hangar that also has an indoor skate park.” 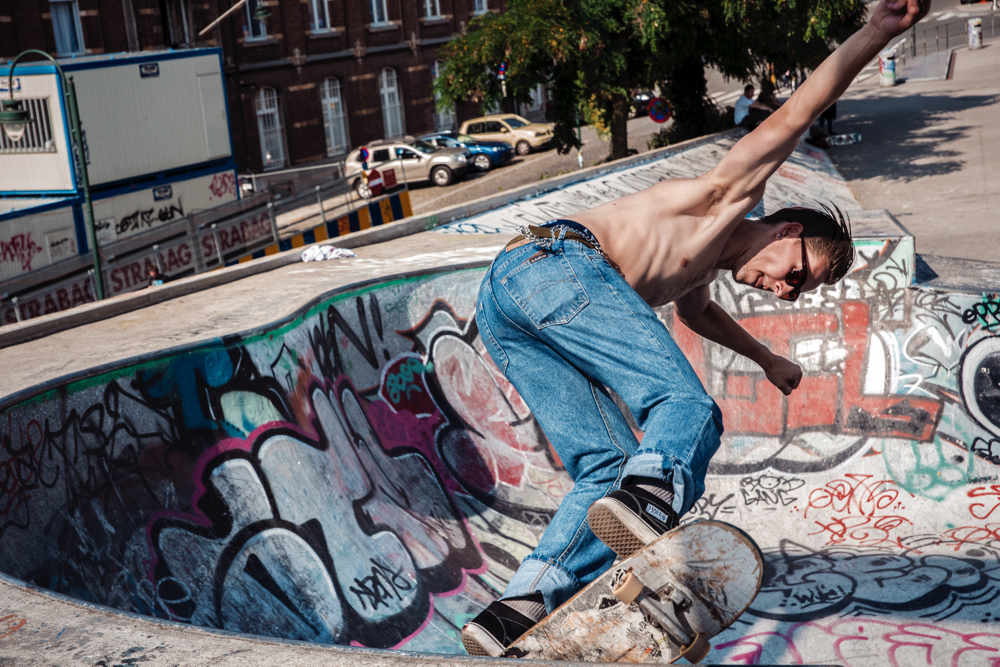 Devit is Belgian but his family is Polish. He speaks perfect French but also speaks Polish at home so he doesn’t forget where he comes from, because roots are important. Playing in a band and skating together are the elements that bind his friendship with the other kids in the park. In between tricks, he pauses a moment to reflect: “We are human beings and we can coexist.”

Linkedin
RELATED ARTICLES
OTHER ARTICLES
In the latest instalment of Photographers in Conversation, the chronicler of raves, protests and beyond explains why he’s drawn to such specifically visceral environments.
Over a dozen Stop Deportation activists locked themselves to each other outside a detention centre to prevent coaches taking those due to be on the Rwanda deportation flight from leaving.
Finland-born photographer Sirkka-Liisa Konttinen looks back on her decades-long documentation of life in Northern England.
In her new book, the author explores the country’s housing crisis in human terms and calls for radical action to address a broken system.
On the fifth anniversary of the tower fire, around 18,000 joined the walk to remember the 72 dead and to demand justice.
Proposals to introduce a minimum GCSE threshold for student loans will disproportionately affect those from marginalised backgrounds.