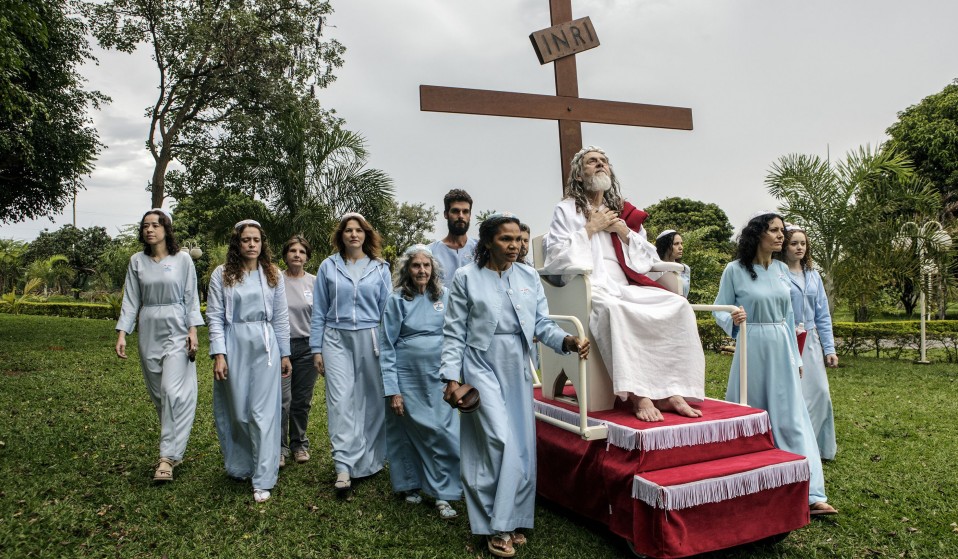 From Middlesborough’s Messiah to the Jesus of Brasilia – photographer Jonas Bendiksen finds the leaders convincing themselves (and others) that they’re the second coming.

From Middlesborough’s Messiah to the Jesus of Brasilia – photographer Jonas Bendiksen finds the leaders convincing themselves (and others) that they’re the second coming.

Before he began to find, chronicle, and photograph the lives of people who think that they are the Messiah – seven men from different parts of the world who believe, sincerely, that they are the Second Coming of Jesus Christ – Jonas Bendiksen was an agnostic photojournalist from Norway. He had worked for Magnum as an intern, before setting up in Russia to capture life on the edges of the former Soviet Union – a project that would turn into his 2006 book, Satellites.

But faith – and his own lack of it – stuck in the back of Bendiksen’s mind. A story from his time in Russia about a man called Vissarion – a Messiah in Siberia, a fired traffic cop with 5000 disciples – recaptured his imagination. He found Vissarion and then continued his search. He then found more Messiahs in England, Brazil, Russia, South Africa, Zambia, Japan, and the Philippines – each with their own stories, followers, and gospels.

His new book, The Last Testament, treats these subjects with a plain lack of scepticism that, at least on the page, translates to something like faith. Bendiksen’s photographs are prefaced by each Messiah’s own Gospel (printed on biblically thin paper), and the author’s own story of meeting his subject. 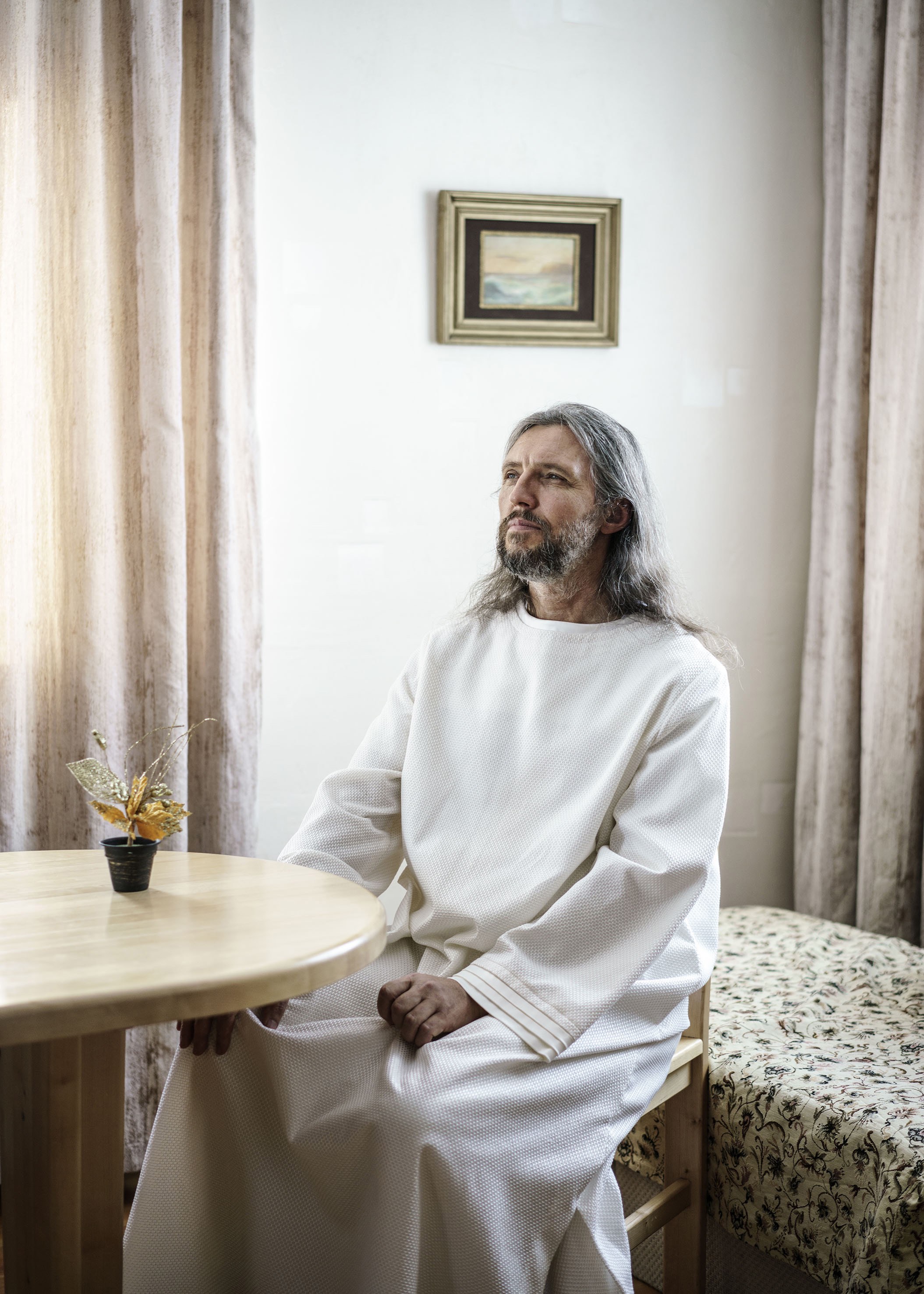 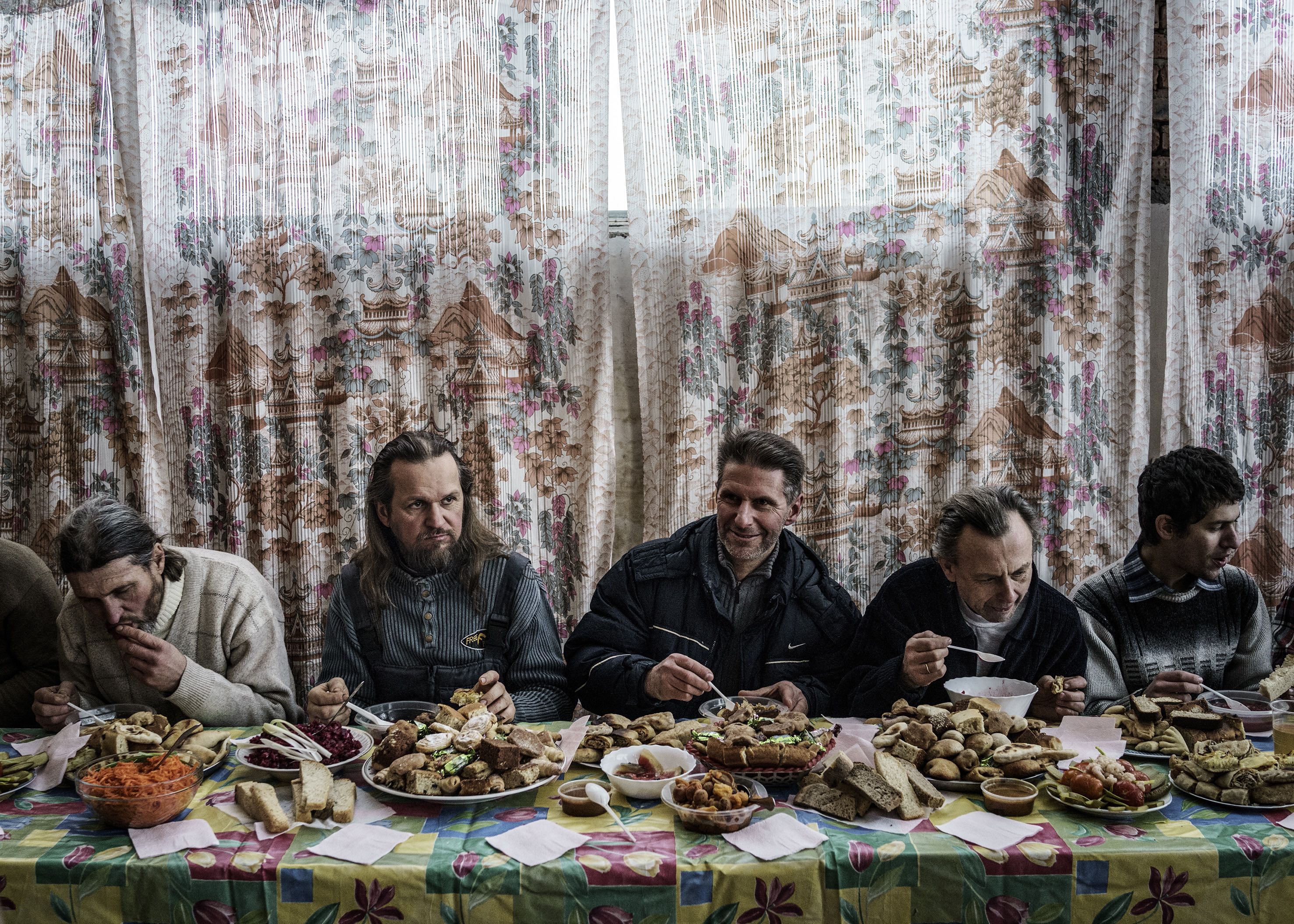 He doesn’t contradict the effortfully supernatural, syntactically slapdash writings of each New Jesus. In the first gospel, from the Zambian “Jesus of Kitwe,” we read: “I have preachers who will be able to preach my word all around the world that will read my people to heaven kingdom. This will start here on earth till the end comes meaning I am here to rule the whole world for I am the king of kings. CONTACT 0966698358 THE LONG AWAITED MESSIAH RESIDE IN KITWE ZAMBIA.”

Bendiksen’s story begins in a similar, if more succinct fashion. “Jesus of Nazareth was a carpenter by trade. Upon his return two thousand years later, he operates two unlicensed taxis in Kitwe, Zambia.” 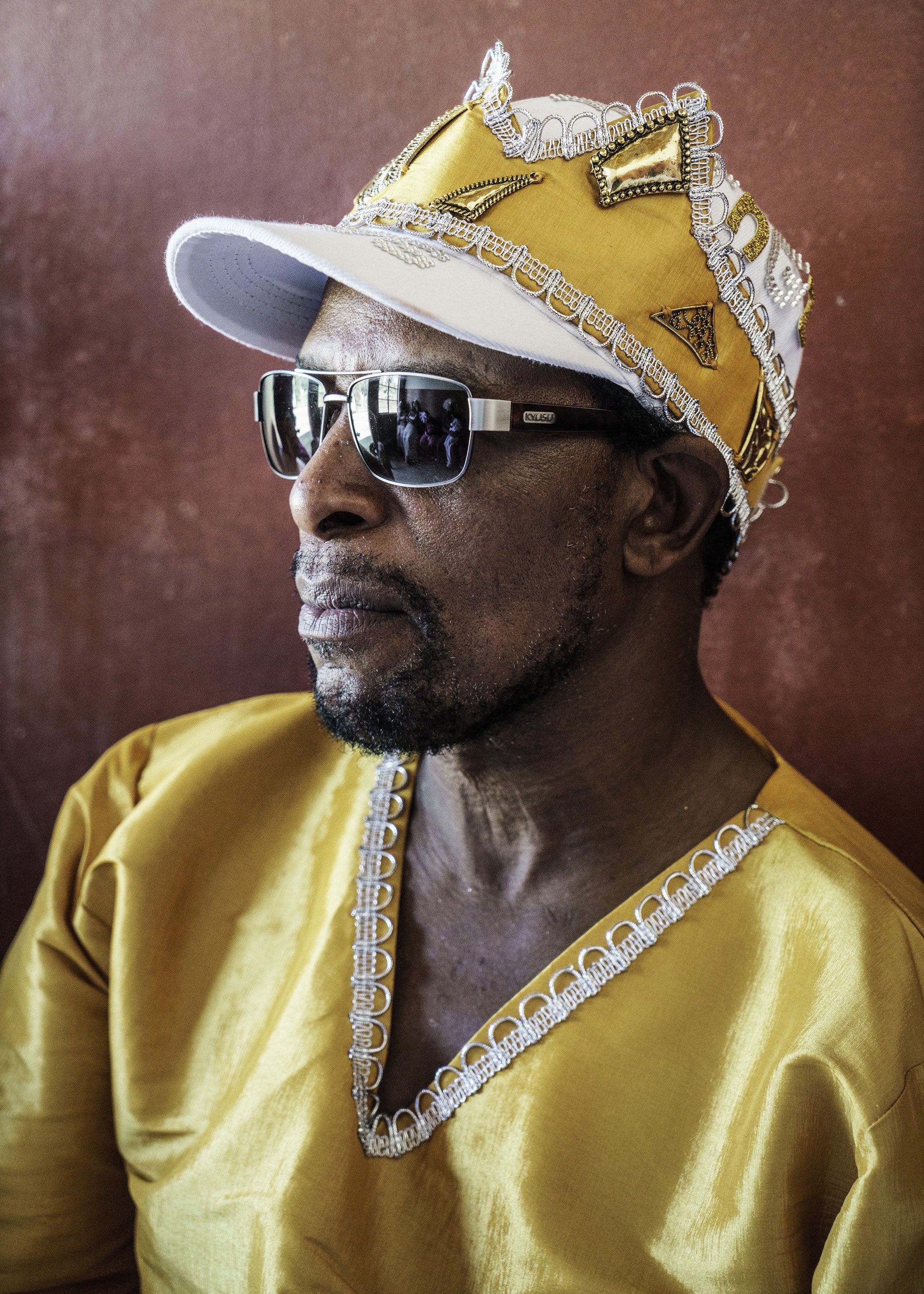 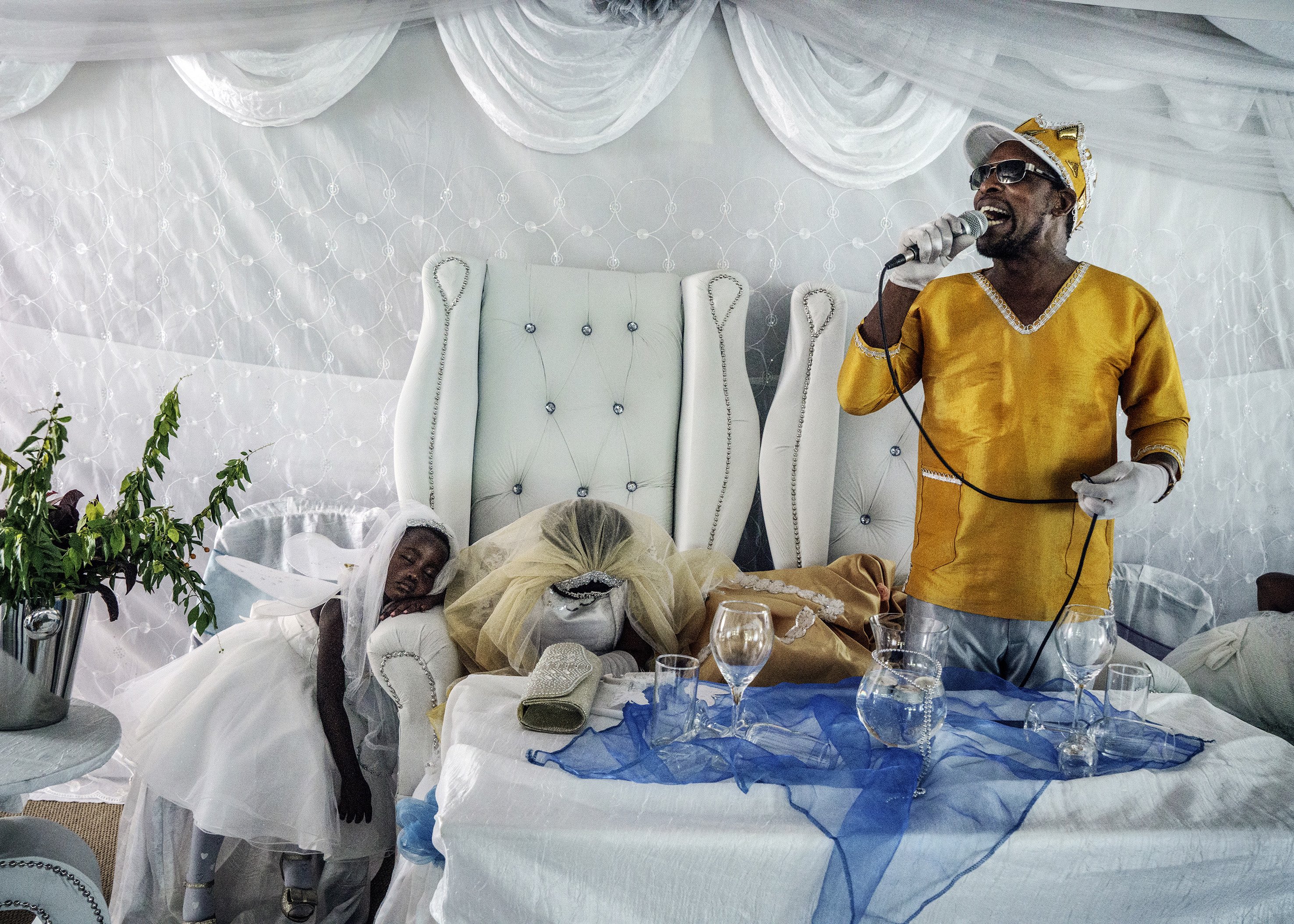 Bendiksen’s photography drives at that same blend of divine and mundane. Shayler the Christ is pictured staring at the sky, goggles on, a rolled-up cigarette coming up to his lips; Jesus Matayoshi of Japan stands on top of a minivan, serenely spreading his Gospel with the noise of Tokyo’s advertisements behind him; in South Africa, Moses Hlongwane, the Lord of Lords, eats a white bread dinner on his bed. Bendiksen can embrace the surreal nature of these situations without ignoring the world continuing unbothered around them.

Bendiksen remains an agnostic himself. He’s just a truer agnostic than he was before. If someone is the Messiah, he asks, why not one of these guys?

We called him at his home in Norway to talk about the genesis of the book, his shaken lack of faith, and the aesthetics of a Messiah complex. 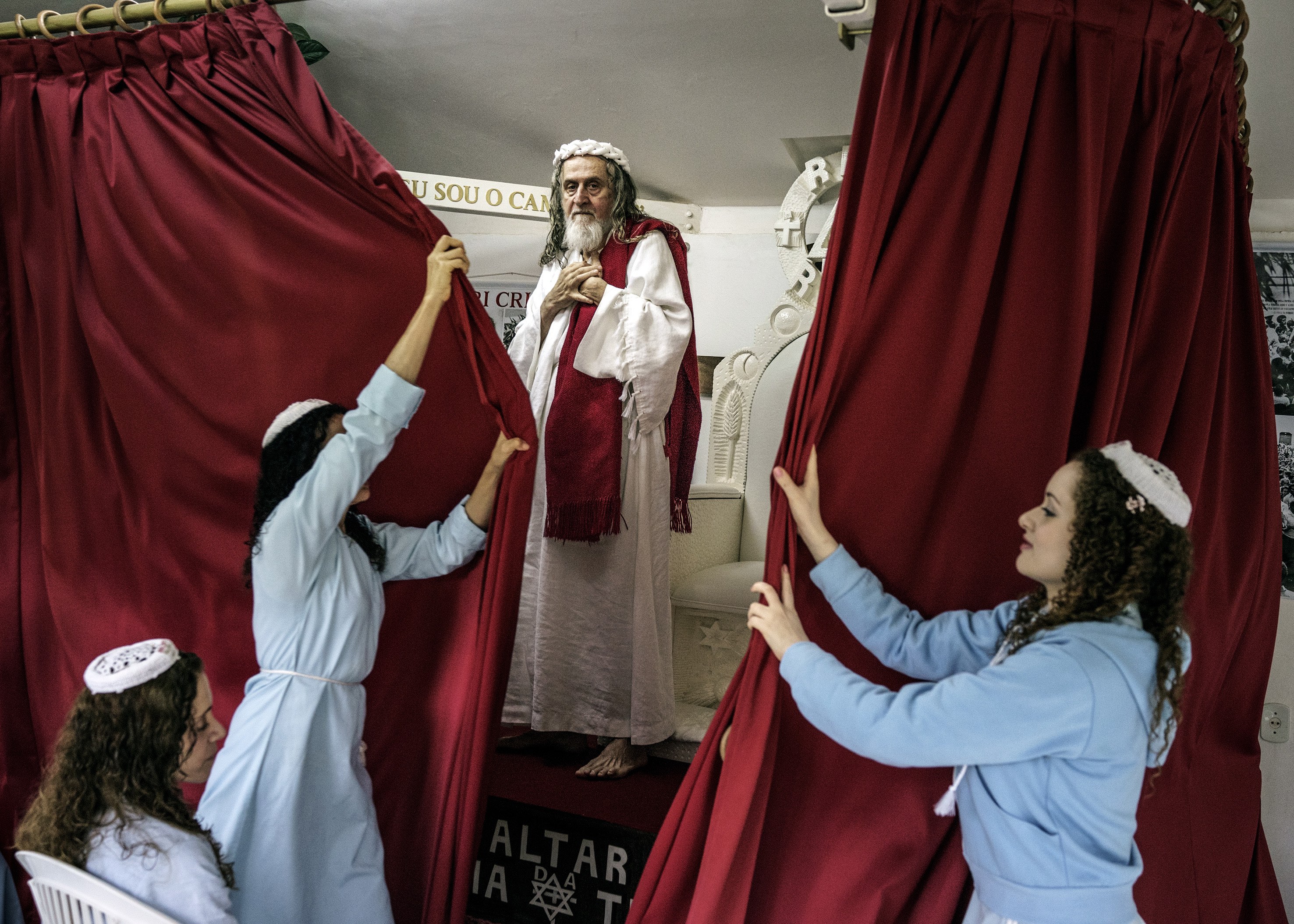 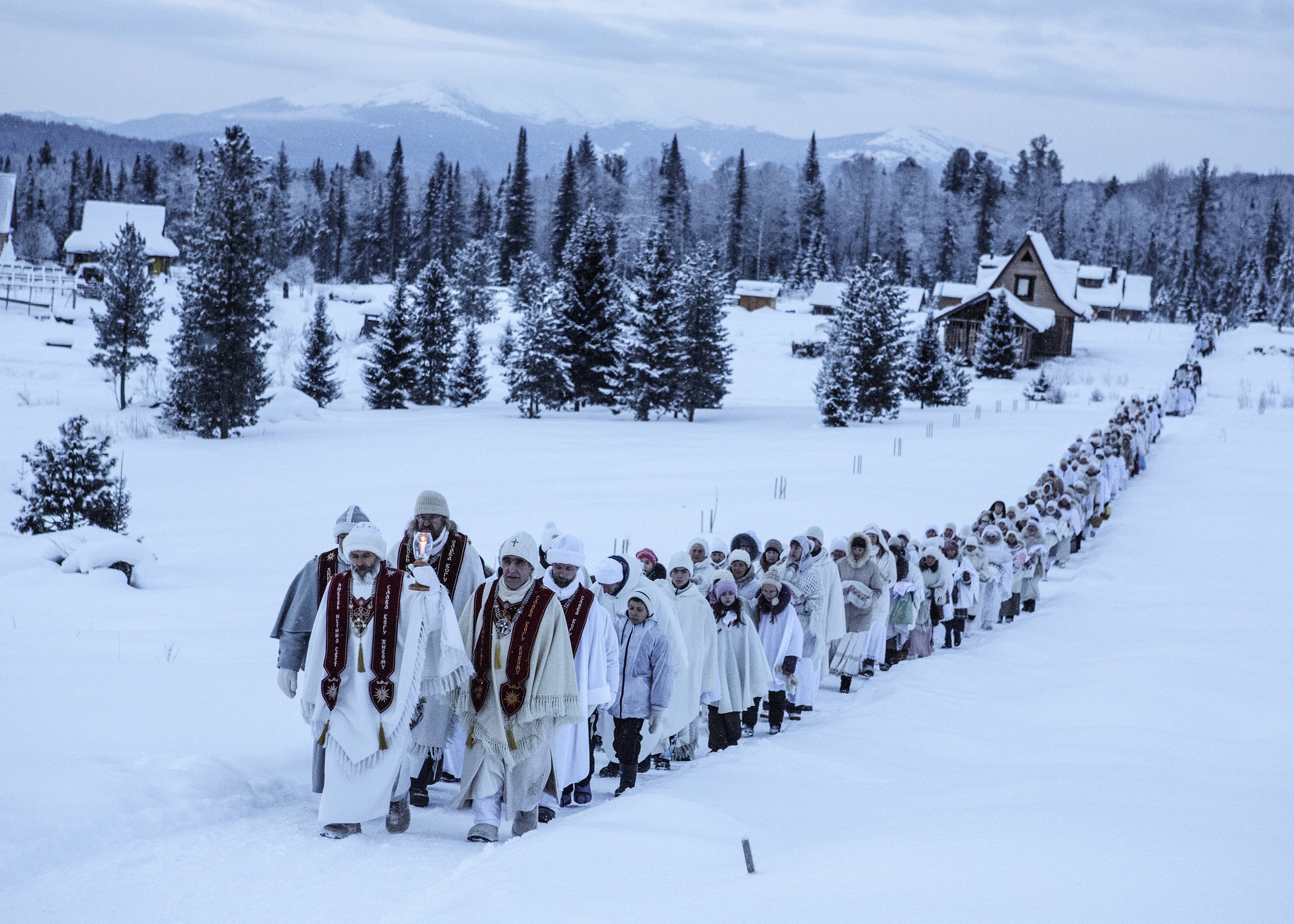 What inspired this project?
In the last few years, I’ve had this sort of fascination for faith and religion. I guess it’s just an opening of a newspaper on any given day and seeing – contrary to many people’s predictions – that faith remains solid, a huge influence and force in society around us. I guess faith always has been a bit of a mystery to me with my background.

I didn’t grow up in a home with God. I’ve always looked at faith as something fascinatingly unknown to me. So, that’s why I wanted to sort of go and somehow explore faith, and belief. If it was influenced by this or that body of work… I mean in the moment and everything like that. It’s one long continuum of what I am concerned about and fascinated by and curious about at any given time. That’s what I go out and make work about.

Being interested in faith is one thing, but this is a particular way of coming at faith. You’ve chosen an odd extreme. How did you even make contact and find out about these characters?
One of these men I have known about for a long time. In the late 90s, I read a piece in a Russian paper about Vissarion, the Siberian Messiah. He’d set up his community out there at that time, and I remember being fascinated about that. I guess he’s always been somewhere in the back of my mind. My personal architecture is one of science and logic and what I can touch and feel. But then thinking about faith – everyone has asked the question, ‘What Would Jesus Do? What would it be like if, after 2000 years, Christ did return as prophesied? What would he think of our world, all the mess we made?’

For me, it’s the most beautifully simple and suitable way to look at this. Here’s the chance – I can actually go up and meet Jesus himself and ask the questions I have, and maybe there will be some answers, and I can touch and feel how his believers feel in his presence, and maybe I can sample that somehow. 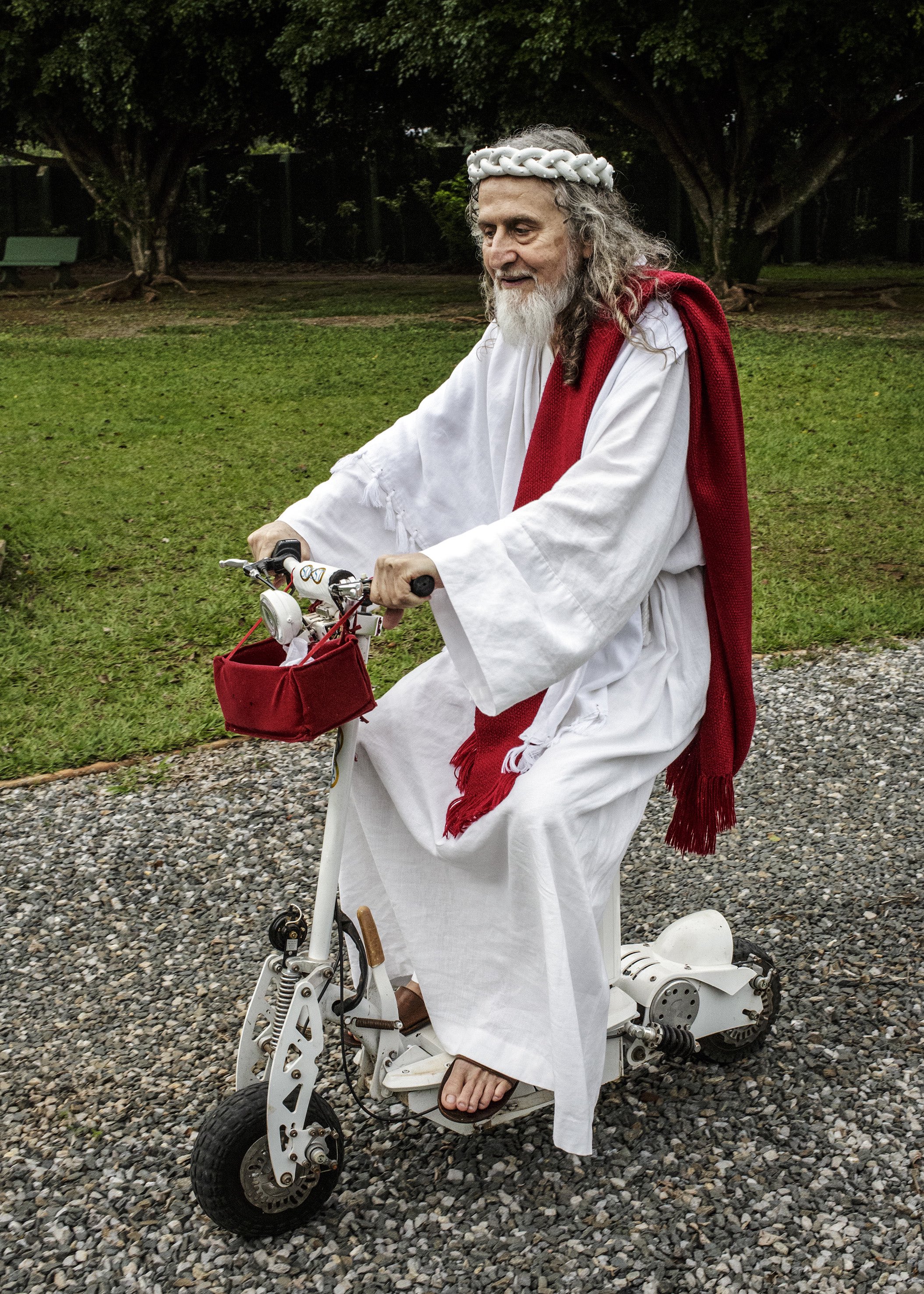 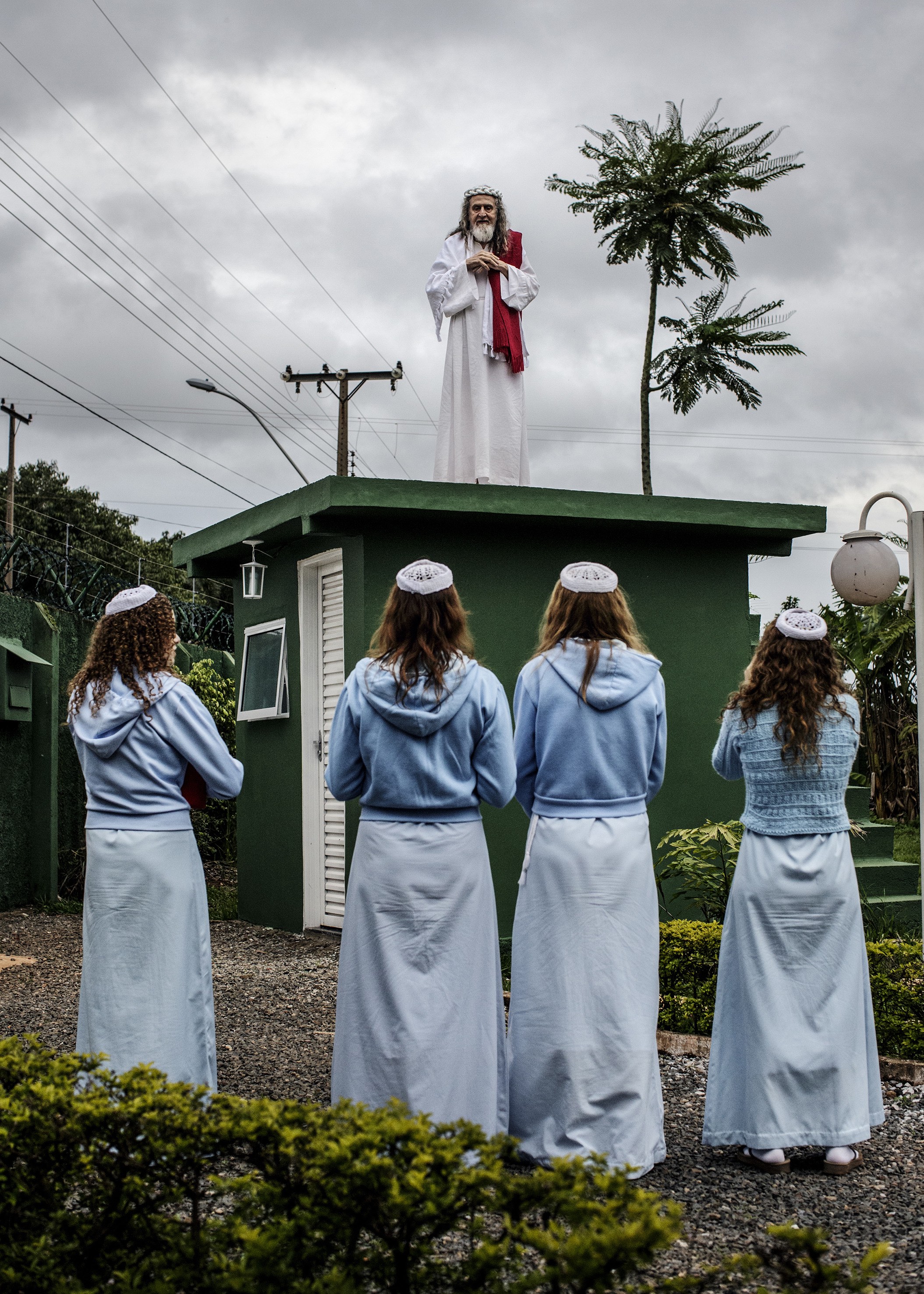 That comes through in your interview style, too – you treat these people without scepticism.
I wasn’t interested in going out there to try to critically assess the pros and the cons. I’m asking if the teachings of any one of these people are any less plausible than any other line of faith, any other belief system. Why wouldn’t it be one of these? Where is the point on the line between faith and delusion? People tend to look at these guys and the instant reaction they have is, ‘This guy must be mad; they’re all mad.’ Well, why? Why is it mad to believe? It’s not mad to believe that Jesus one day will return, but it’s suddenly madness when he shows up?

What is the impact of a camera when you’re in these scenarios? Did it give you more access? Did it bring you closer to your subjects, or did you feel more distance because of the need to photograph and then create that sort of barrier?
It’s sort of impossible to say. I am a photographer and photography is how I tell stories, so that was sort of a set premise. I mean, I was in touch with one guy that is not in the book But he was saying, ‘Nice to hear from you, but there’s a commandment against making graven images, and photography is graven images. So obviously, I can’t let myself be photographed by you.’ So that stopped it right there.

The Messiahs are, to varying degrees, concerned with the aesthetics of the whole thing. Some of them have recreated an aesthetic that’s very reminiscent of the Renaissance painters’ version of what Jesus looked like. You can see those same aesthetics at work. When a photographer is there, that somehow naturally recreates itself, and there is a whole visual profile that they are aware of. In other cases, they were completely unconcerned about those things. So it’s hard to say if it brought me closer or further away because, to them, that’s who I was – I was someone who would bring the gospel out to the world using a camera. 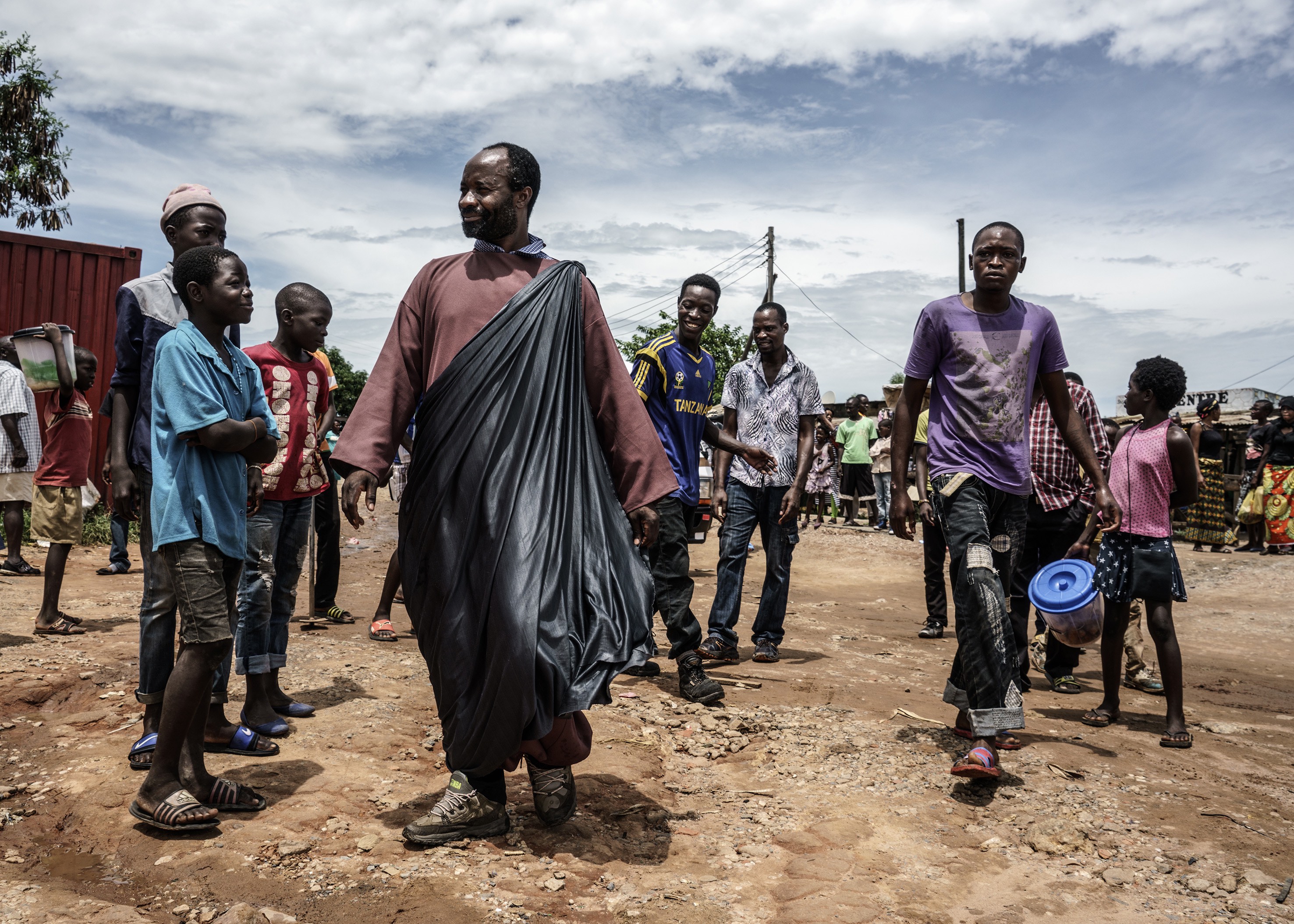 Was it ever difficult to pull yourself away? You seem on the verge of getting caught up with these messiahs at times. Did it lead you to the brink of it?
Maybe not to the brink of being able to release myself from me. Like I say, my own composition – the mechanics of how I work – is fairly set. I can’t, on willpower alone or by experience, switch off that sceptic’s view. But for many moments throughout this project, I felt like I was at least able to visit that other, more magical world, where everything around me has meaning. Whatever meaning I get in my life, I have to create on my own, with the people around me. I find a lot of meaning in life through that. But, of course, for the disciples of these Messiahs, their world in many ways has more meaning than mine, because they see their life having a very cosmic meaning – a key role in the end narrative of mankind as we know it. That’s a totally different level! And I guess, I was able to visit that world. Because it is a magical and wonderful world, and it was fantastic, I have to say, to sort of be part of it for a little while.

Some of the societies that I visited, [they had] terrific communities. I would love to my own communities be more like that. I could certainly fantasize about how wonderful it would be to sort of drop everything to go live here with the Messiah. I could see it being an excellent life in many ways. I guess it has changed me in a sense.

I have always operated on the premise that this is the key question—no matter what the situation: “Is something factual or not? Is it true or not?” But now, spending time with these communities, I have to say I’m not so sure. I see the impact these Messiahs have on their followers. Is it really that important to establish if Christo really is the Messiah or not? I don’t know. Leave it open.

The interview has been edited for length and clarity. The Last Testament is published by Aperture / GOST and available to buy now on Gost books.

Linkedin
RELATED ARTICLES
OTHER ARTICLES
Photographer Bud Glick recounts documenting everyday life in the area, and what it taught him about the Chinese immigrant experience.
One year on from the fall of Afghanistan to the Taliban, Tiara Ataii speaks to those who have been forced to make the treacherous journey to Europe for safety, and the barriers and horrors they have faced.
Following the release of his latest album, the rapper talks about finding a new approach to songwriting, attitudes to poverty, and why his music is more than a political statement.
A new series of photos by Johny Pitts shines a light on communities and subcultures that have all too often been overlooked.
We introduce our series spotlighting the voices of people who’ve been impacted by anti-abortion laws and anti-choice protestors.
The author discusses her new memoir, which offers a sobering reflection on the racism and otherness she’s experienced along with a joyful celebration of her culinary heritage.