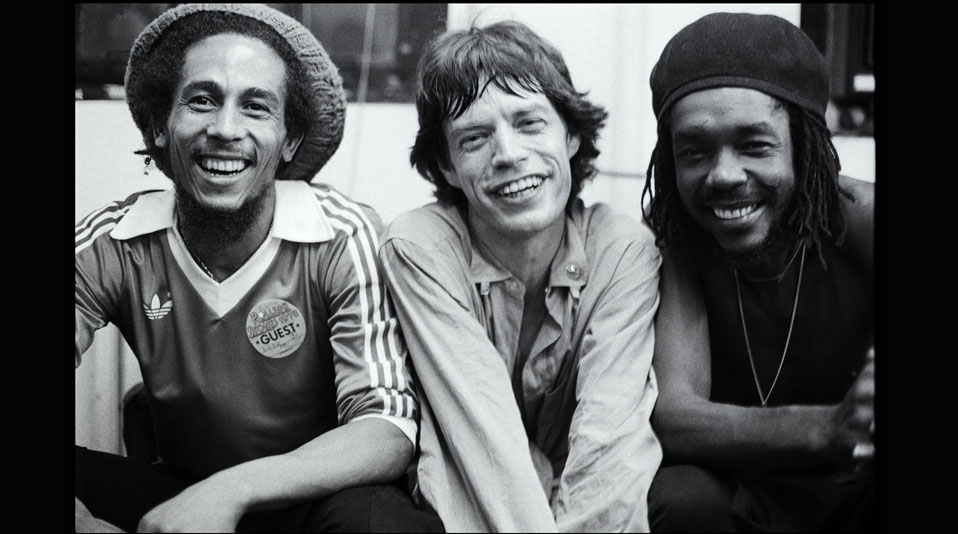 Iconic music photographer Michael Putland reflects on one of his favourite photos from his archives featuring Bob Marley, Mick Jagger and Peter Tosh.

Iconic music photographer Michael Putland reflects on one of his favourite photos from his archives featuring Bob Marley, Mick Jagger and Peter Tosh.

Second up is iconic music photographer Michael Putland, whose incredible body of concert and documentary photography – featuring everyone from Siouxsie Sioux to The Clash – is being celebrated by Getty Images Gallery in a 50-year retrospective next month.

“I left school when I was 16 and I got a job as a photography assistant, because I’d always loved photography. And I’d always loved music. So I’d go to concerts in the evenings and take little old cameras around and snap the artists as they were on stage. I found I could sell one or two of the prints and it all just developed from that really.

It was much easier back then. There were very few people doing it. You go to a big concert now and 40 people are shooting the show then they’re all escorted out of the hall after two numbers. I always used to shoot the whole show. The national press weren’t interested in those days, and there wasn’t much music press, so the artists were very pleased we were there trying to take their pictures. And you’d always get to go to the afterparty.

That’s how it was with this picture of Bob, Mick and Pete. An afterparty in the dressing room for a small amount of people. The Stones had done a gig in the Palladium Theatre in New York in 1978 and it Mick had just come off stage. All the Stones were there, as well as Bob Marley, Peter Tosh, Paul and Linda McCartney. It was a very elite group, if you like. And obviously I knew the Stones very well at that time, so I just snapped it really, it was a lovely moment.

I’ve always tried to photograph people’s character. And I think I’ve captured that, certainly with Bob and Mick, the pleasure in the moment. If I had a gift it was catching the person, catching what they were. And this was before digital, when it all became about making the person beautiful. I was more of a photojournalist. I always worked very hard never to take a photograph in those personal circumstances that I thought people wouldn’t like. I felt very privileged to be given that freedom. I loved the band and I was always respectful to them. I’d been watching them since their very early days because I was only a few years younger than them. That’s how it was in those days, The Who used to play my local pub. It was a fantastic period of time.

This is an image that people seem to like very much and people often ask me for it to hang on their walls. I think after my first Stones tour in 1973 people started to treat me differently. They thought, ‘Oh you must be okay!’ and I started working with really good people after that.

The first photographer I assisted said to me, ‘Kid, keep it simple.’ If you give me too many lights or a flash set-up I just go to pieces but if I’m in a darkened room with a little bit of light coming through and an atmosphere, then what skill I have, will shine through.”

Michael Putland’s retrospective A Life in Music – 50 Years on The Road runs at the Getty Images Gallery on Eastcastle Street, near Oxford Circus, from October 22 to November 22.