Issue Archive / Being a photographer in an age of unrest 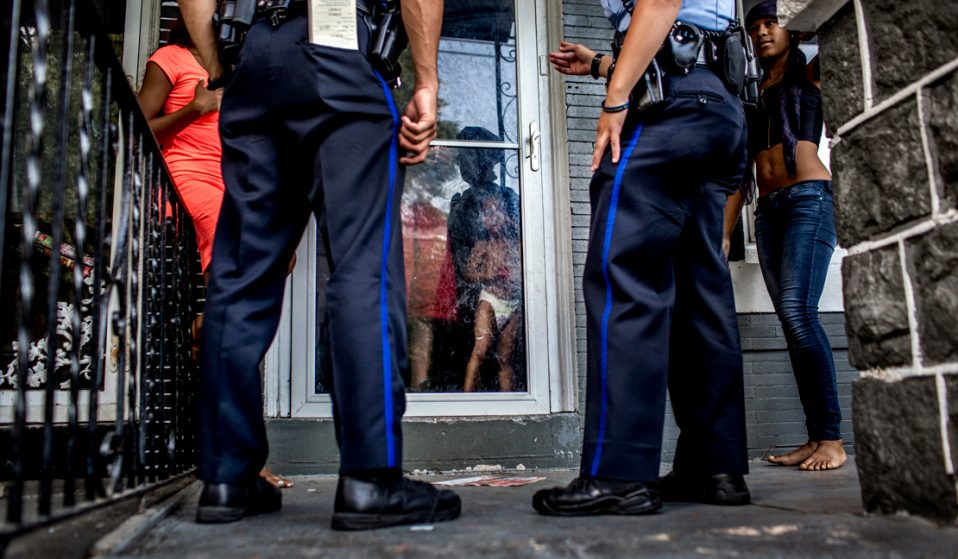 Natalie Keyssar’s photography uncovers the impact of social and political structures on everyday lives, capturing the messiness of uncertainty.

From the US to Latin America, Natalie Keyssar’s photography uncovers the impact of social and political structures on everyday lives – capturing the violence of inequality and the messiness of uncertainty.

I grew up in Durham, North Carolina, during the 1990s – a time when the American Dream felt like it was collapsing in on itself. One of my earliest perceptions of the world around me was that the system was broken. I was comfortably middle class and had a lot of friends with less, as well as other friends with more.

I’ve spent a lot of my life moving between different worlds that don’t interact with each other much, and I think it gave me some formative lessons on privilege and the violence of inequality that in many ways set the foundation for my work. 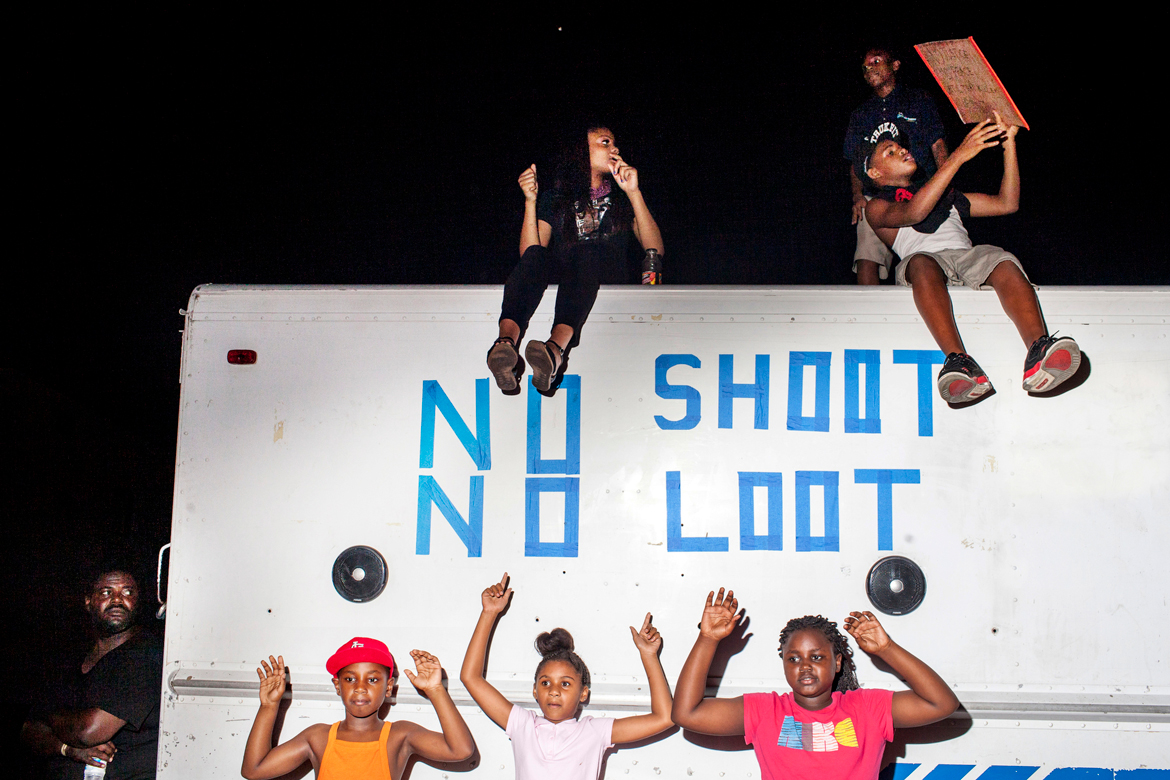 Children dance to music playing from a truck during a protest in Ferguson, Missouri, 2014. Moments later, riot police insisted that the protesters keep marching in circles around the designated protest area and not stop to dance.

The first of my friends went to jail when I was 16. The day before his court date, we tried to pack the youth he was about to lose into one manic all-nighter. The next morning he tried to see his public defender before court as they had never spoken and he didn’t really understand what was in store for him.

I went along for moral support… but when the secretary told us the lawyer wouldn’t see him before the trial, I burst into tears of rage. It seemed like the poor went to jail and the rich went to college.

A lot of the issues that plague the US, like the opioid crisis and the business of prisons, felt personal before they became part of my work. I’ve been lucky. A lot of my perspective on the world and my work comes from the complexity of my feelings about that luck. 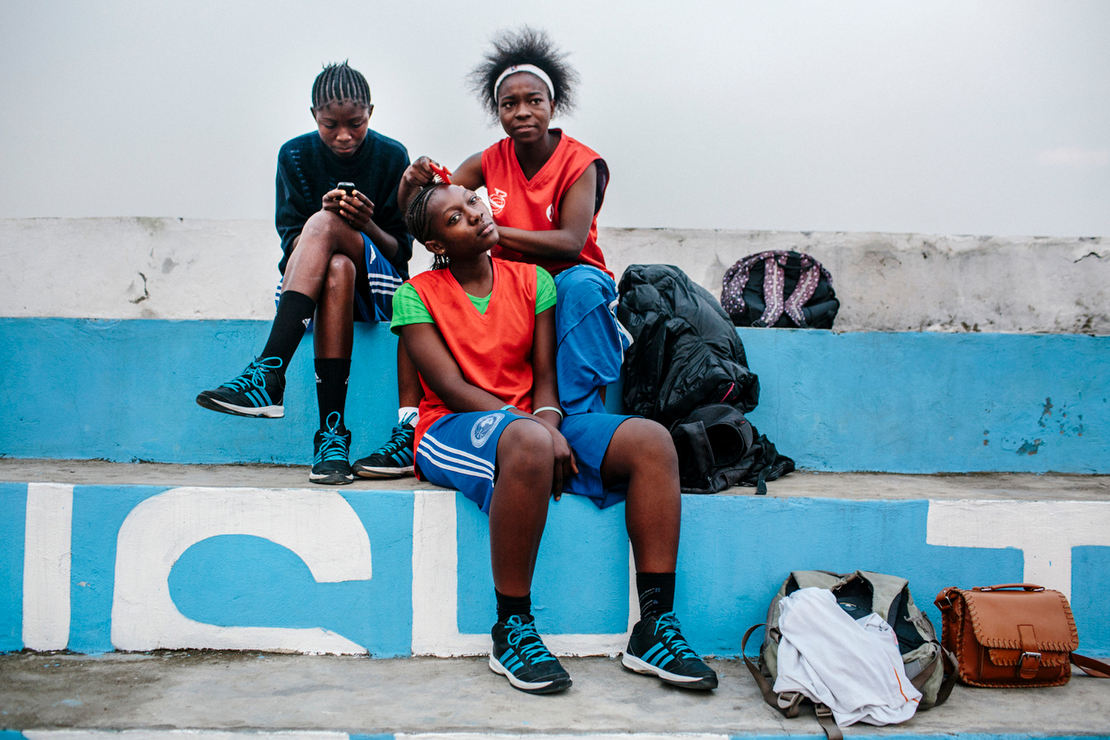 Basketball players on the sidelines of a game at Maison Des Jeunes, DR Congo, 2015.

When I moved to New York for college at 18, it felt like I’d jumped across a chasm between north and south. People would share their perception about where I came from and I had no reference for the place they were imagining.

Back then, before I became a photographer, I painted as a fine arts student – and my paintings were always garbage unless I cared about the subject. And by “care” I mean big emotions. In love. Enraged. Heartbroken. All the better if all of the above.

I think I stopped painting and started shooting because it cut out a lot of these barriers between myself and the issues or people I wanted to work with. 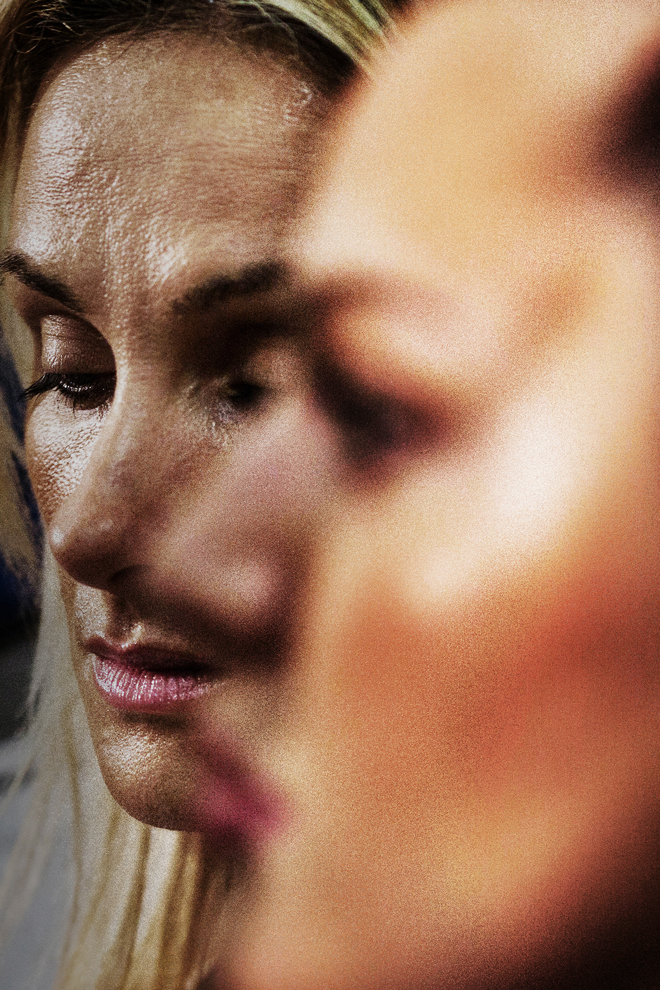 Now I bounce between North America and Latin America. Sometimes I feel like I understand more about the US when I get back, sometimes less. I’m still thinking about luck.

I can still get on another plane and fly out – and I always do – while so many people I photograph can’t and never will, all by an accident of birth. That’s a blessing and a debt and something that I try not to ever take for granted.

I’ve been trying to document the political and social power structures we create and how they affect us on a personal level. Can individuals and groups really change our systems? 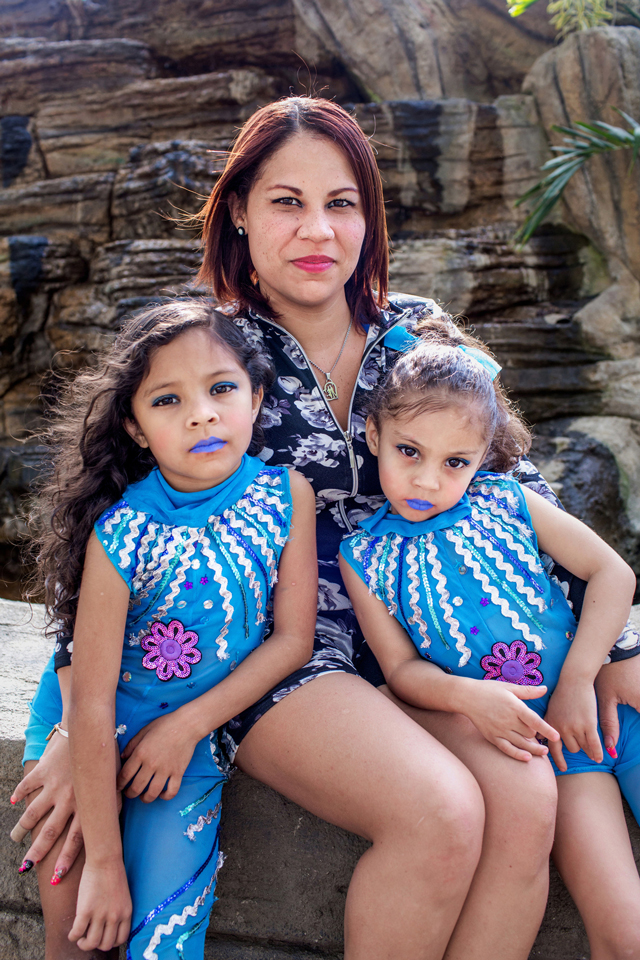 Katiuska and her daughters, Krisbeilly and Karelys, at a carnival party in Caracas, Venezuela.

We create all kinds of rituals, like protest, out of a desire to believe that we can. I shoot a lot of people I profoundly admire for their personal and public efforts to make their communities better, whether it’s through art or protest or sheer survival in the face of terrible odds. I think a lot about what those people have given up.

We make history into clean narratives after the fact but, in real time, it’s a mess – and that mess fascinates me. The heroes become victims while the villains get made into heroes; some of the greatest stories are accidents and some of the most important fights become lost and forgotten.

I’m trying to show what it all looks like at ground-level when the TV cameras get flipped off, the “action” is over and everyone goes home. At this point it all starts to meld together for me into the same surreal narrative. 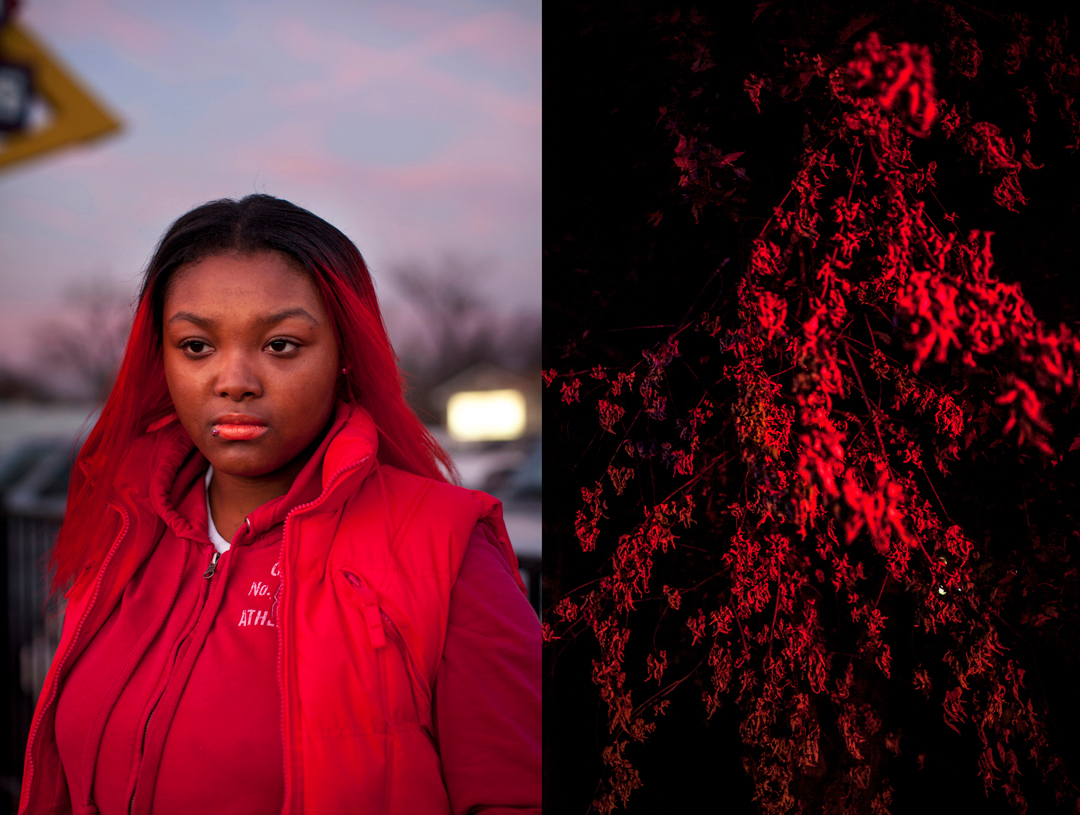 Golden Dawn in Greece reminds me of the refugee crisis here at home. Hearing stories about police brutality in El Salvador causes Ferguson and Flatbush and Durham and Caracas to flash in my head.

I find myself making an audio version of that game ‘Exquisite Corpse’: the one where you draw different body parts without seeing the rest of the image, then unfold the paper to reveal a strange creature born of the collective imagination. My version is pieced together from political speeches from different countries that echo in my mind.

When I started this work, I saw more straight lines. I had certain political beliefs, certain ideas about right and wrong. Having spent the last eight years looking at political unrest at home and abroad, I’ve lost nearly all of my certainty. 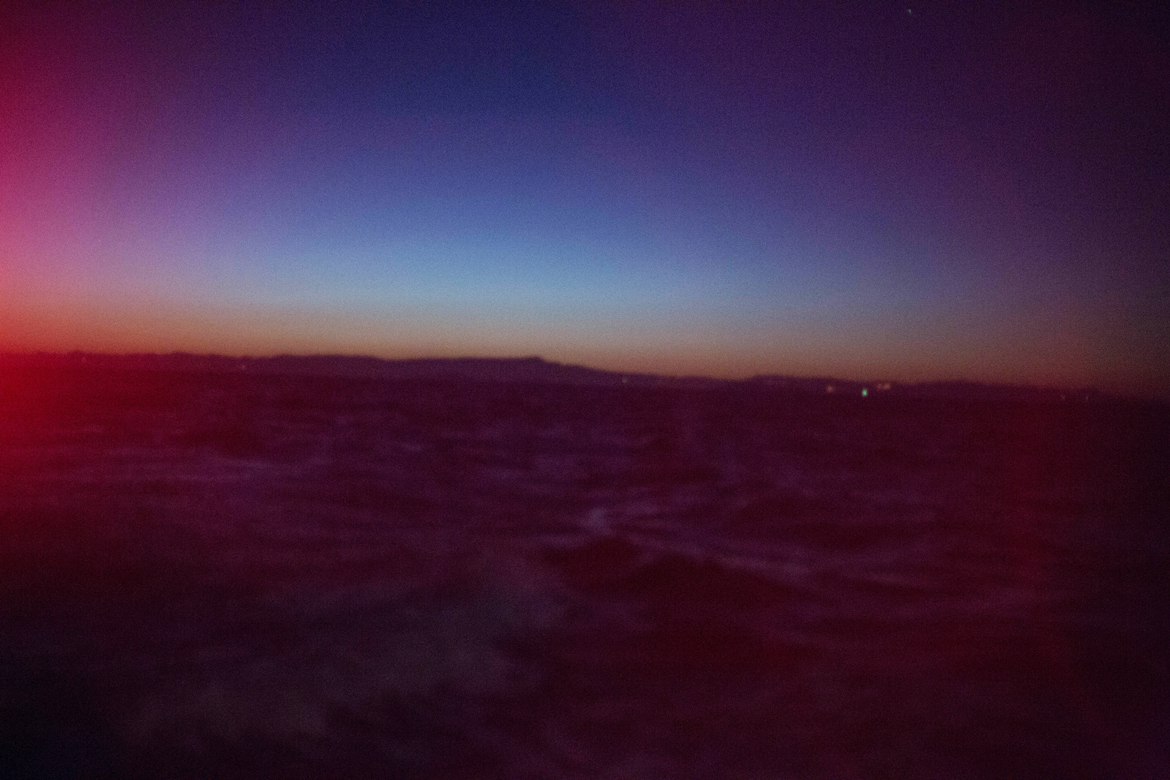 A sliver of sea
separating Greece from Turkey.

There’s been a little too much of the bad guys doing their best and good guys doing their worst. Things that I thought made sense from a distance seem chaotic up close. I see a lot more grey now – and I just hope that leaning into the uncertainty makes me a more interesting photographer.

I just started a new project in North Carolina because I feel like I have more to learn from my own home than ever. I think that’s the most important thing about photography: not the pictures you make, but what you learned while making them.

Linkedin
RELATED ARTICLES
OTHER ARTICLES
Photographer Robin Graubard’s debut book offers an unflinching record of turbulence and change across the Balkans.
While protests over abortion rights rage in the US, access to abortion services is still almost nonexistent in parts of the UK.
In the last of our dispatches from OFFF Barcelona, Rufus Deuchler and Vincent Gault discuss the future of creative process.
Our new magazine is here, starring the inimitable Mitski. Order your copy now and join us on a trip around the world.
The revered showbiz chronicler recalls his journalistic beginnings, documenting subcultural scraps in the ’80s.
New legislation is set to make it more difficult to hold Israel accountable for its human rights abuses.