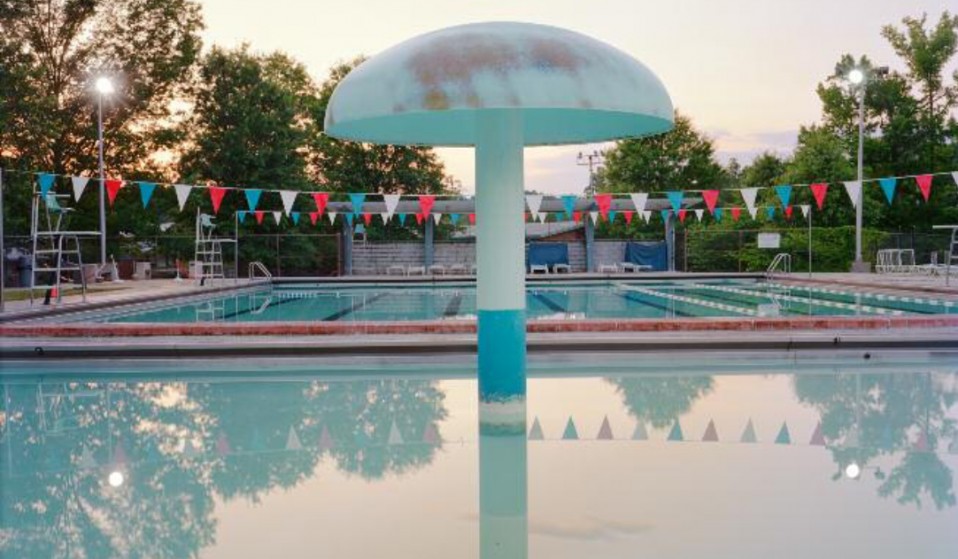 Photographer Jason Reblando uncovers one of the most ambitious but overlooked programs in American history: the 'anti-capitalist' neighbourhoods designed to bring people together.

Photographer Jason Reblando uncovers one of the most ambitious but overlooked programs in American history: the 'anti-capitalist' neighbourhoods designed to bring people together.

When Jason Reblando first moved to Chicago, he wanted to get to know the place by exploring its various areas – a path that drew to him to boxing rings around the city.

The boxers he’d photograph there often lived in public housing, which in turn drew him to Stateway Gardens, a complex of high-rise towers.

Jason spent four years documenting its residents before the place was demolished in 2006, just as his path took another twist. 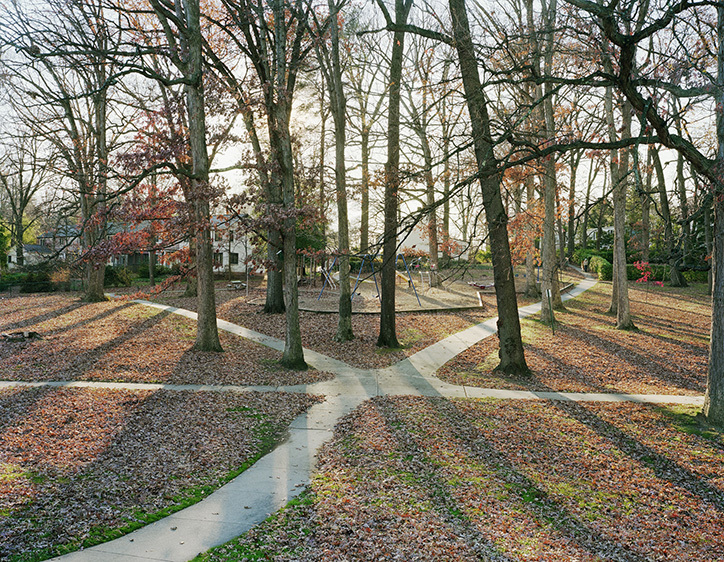 That’s when he learned about another type of public housing complex: one made of low-rise red brick buildings, with lush courtyards, stretched along the banks of the Chicago River. If that sounds idyllic, Jason says, it’s because it is.

He wanted to marry the best aspects of ‘town’ and ‘country. In other words, Jason explains, the social and economic advantages of living in a community with the vibrancy of the natural world. 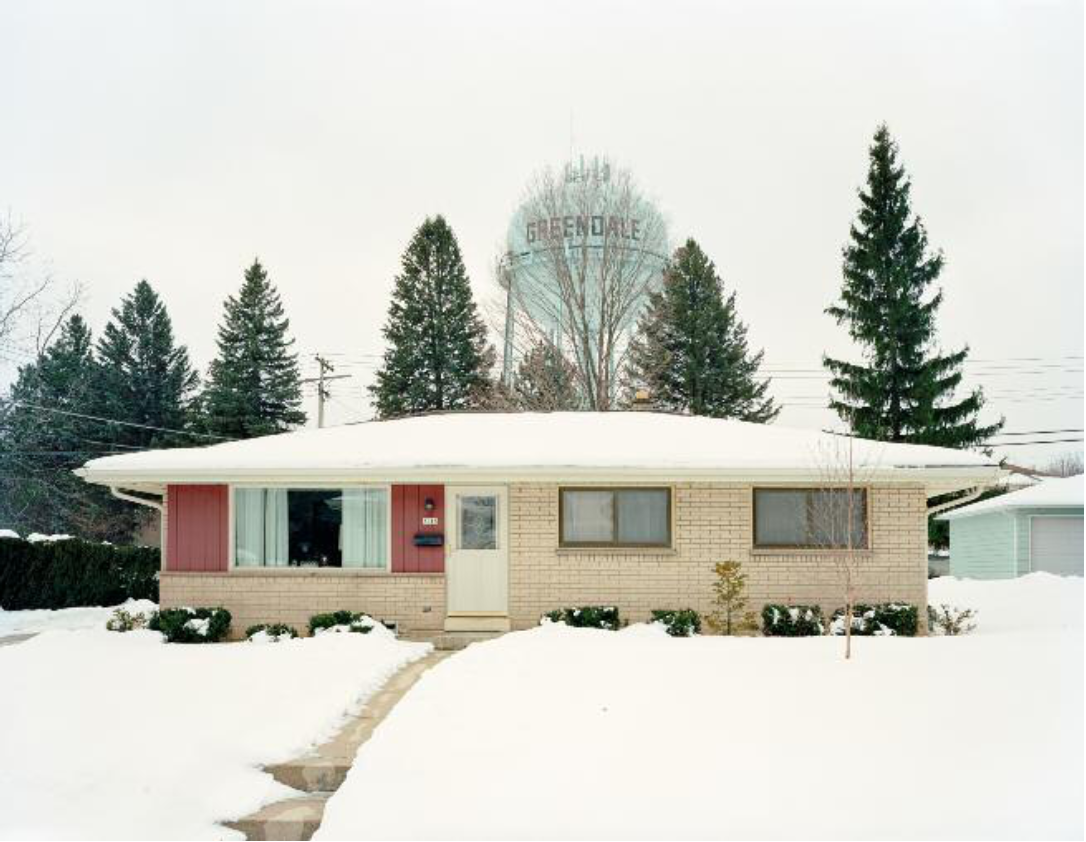 The photographer then discovered that three pilot ‘Greenbelt Towns’ had been constructed along the same principles – part of a plan to create hundreds of new communities across America as a social and economic response to the Great Depression.

“Up to that point, I often associated government housing with low-cost projects that were wilfully neglected,” says Jason, who grew up in Long Island, New York, during the 1970s.

“When I first visited the three Greenbelt Towns, however, it felt like a true expression of [Howard’s] values, designed and managed with careful planning: communal activities, natural landscaping and cooperatively owned businesses.” 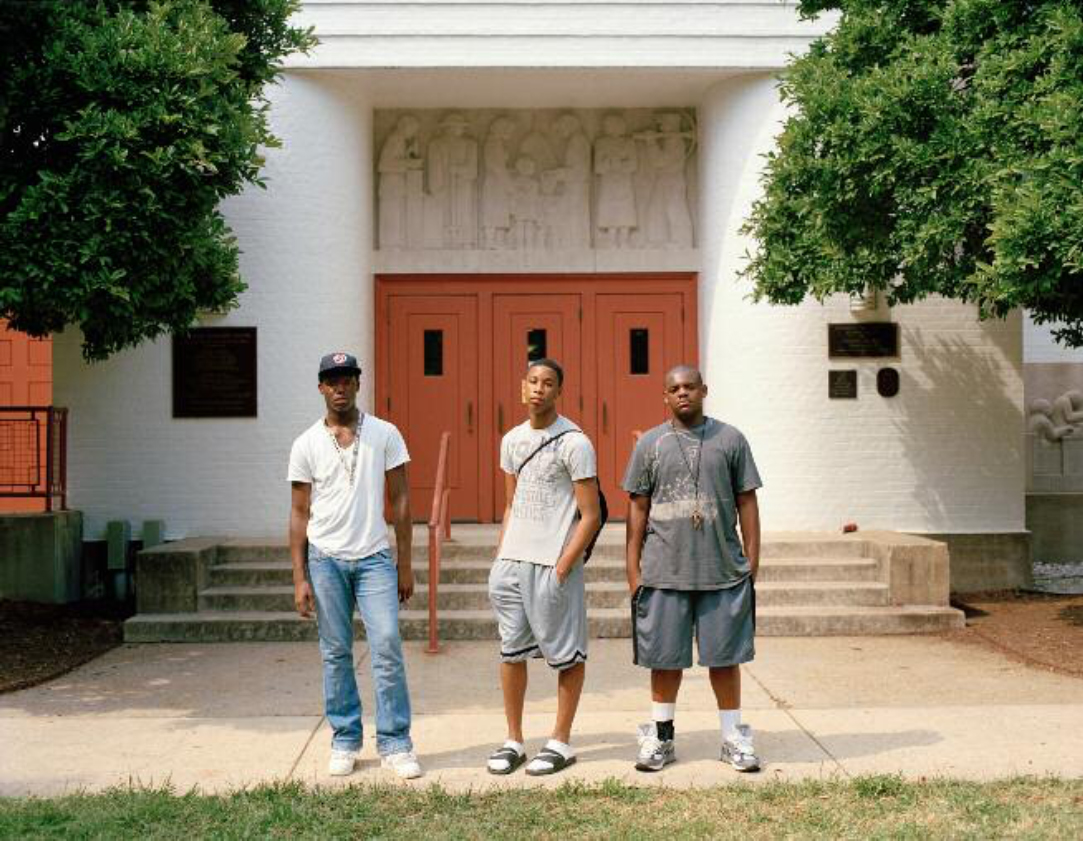 Drawn to the concept of utopia as a place, Jason made repeated visits to the towns with a 4×5 view camera mounted on a tripod, covered in cloth – a conspicuous sight that worked as a natural conversation starter.

That access helped him dig beneath the surface of life in these communities.

“As the child of Filipino immigrants,” he says. “I have had a long-abiding and deeply held interest in what makes people move from one place to another, whether they choose to move or are forced into movement, or whether they move collectively or as individuals.” 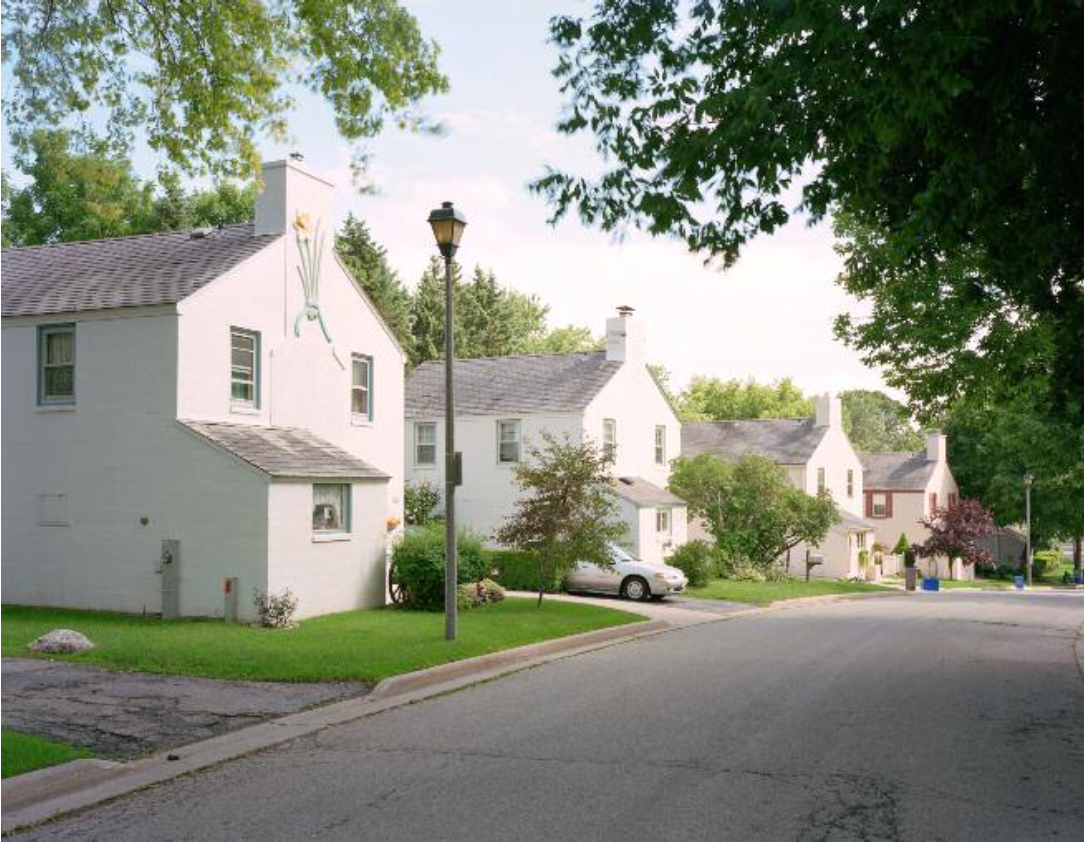 It might sound presumptuous, Jason goes on, but he believes that just living in one of these Greenbelt Towns makes you more likely to buy into the idea that communities are stronger when people look out for each other.

“Even 80 years after the founding of the towns, residents still feel connected to the legacy of the New Deal,” says Jason.

“What continues to surprise me is the complex history behind the towns, such as the accusations and suspicions of them being aligned with socialism. There was no shortage of detractors. 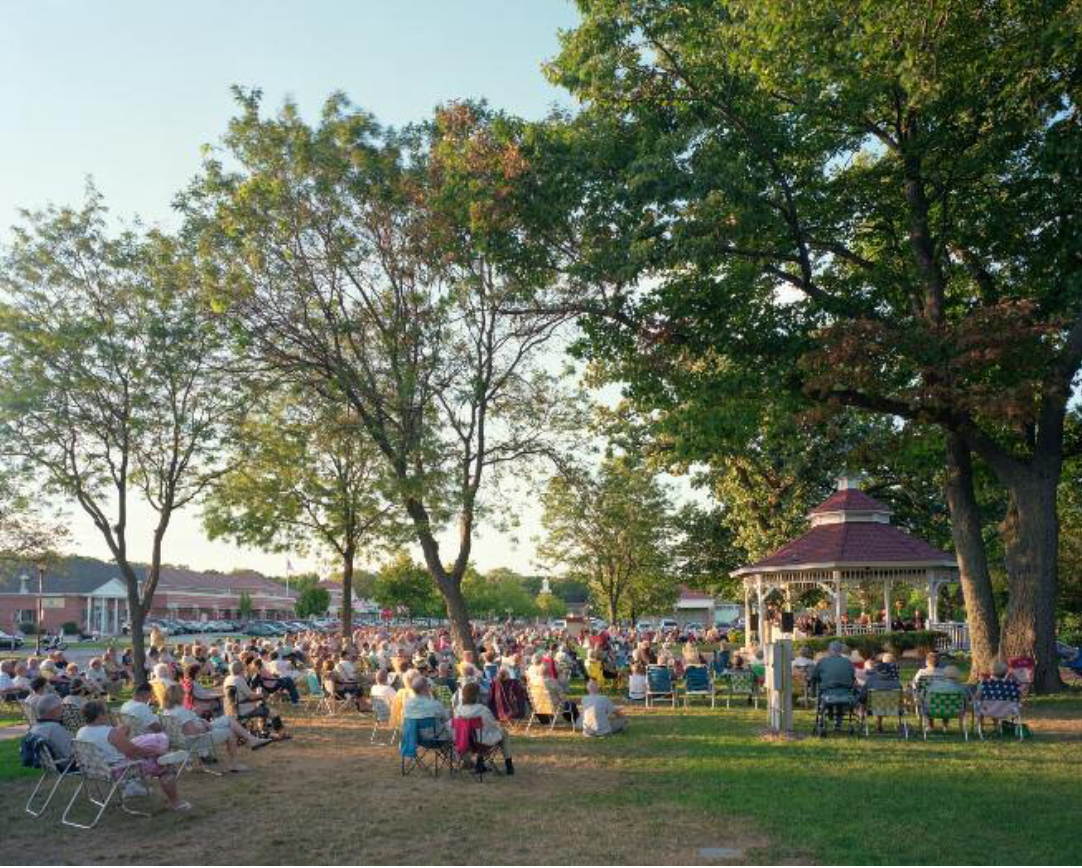 “Opponents contended that planned government communities represented threats to American businesses. These ideological battles continue today as we watch the battle over the fate of our Affordable Care Act play out. The political divides that existed back then are still alive and well.”

If there’s one image that epitomises the essence of Jason’s photobook about these communities, New Deal Utopias, he says it’s the one with a set of lawn chairs – lined up by a resident in Greendale, Wisconsin, to reserve a spot for a Fourth of July parade. 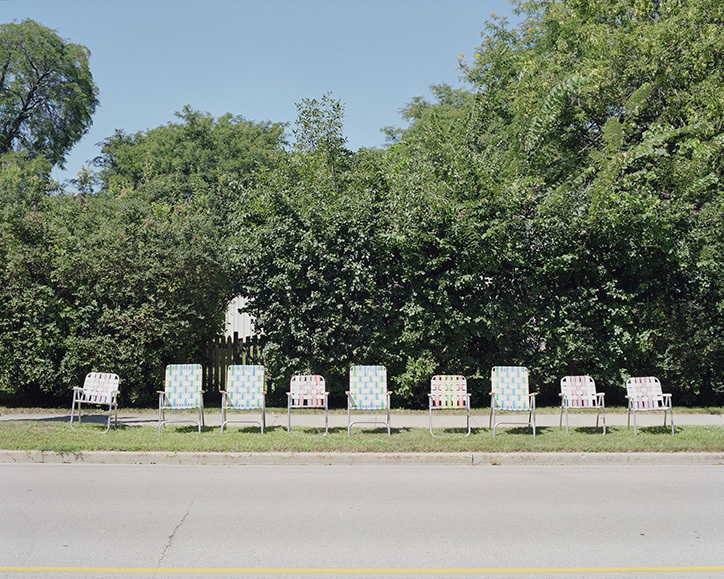 “In many of the images throughout the book there is a cool sterility and a sense of order,” he says. “Many utopian visions set out to make order out of chaos. Certainly this image refers to the enjoyment of a wholesome celebration, but there is also a tension between the rigidity of the placement of the chairs and the wild backdrop of the trees.”

Community, Jason believes, is also integral to developing as a photographer. The best thing you can do is assemble a network of people you know personally – be it peers or teachers – with whom you can share work and feedback.

“I enjoy the solitary nature of photography, but I think it’s important not to exist in a vacuum,” he says. 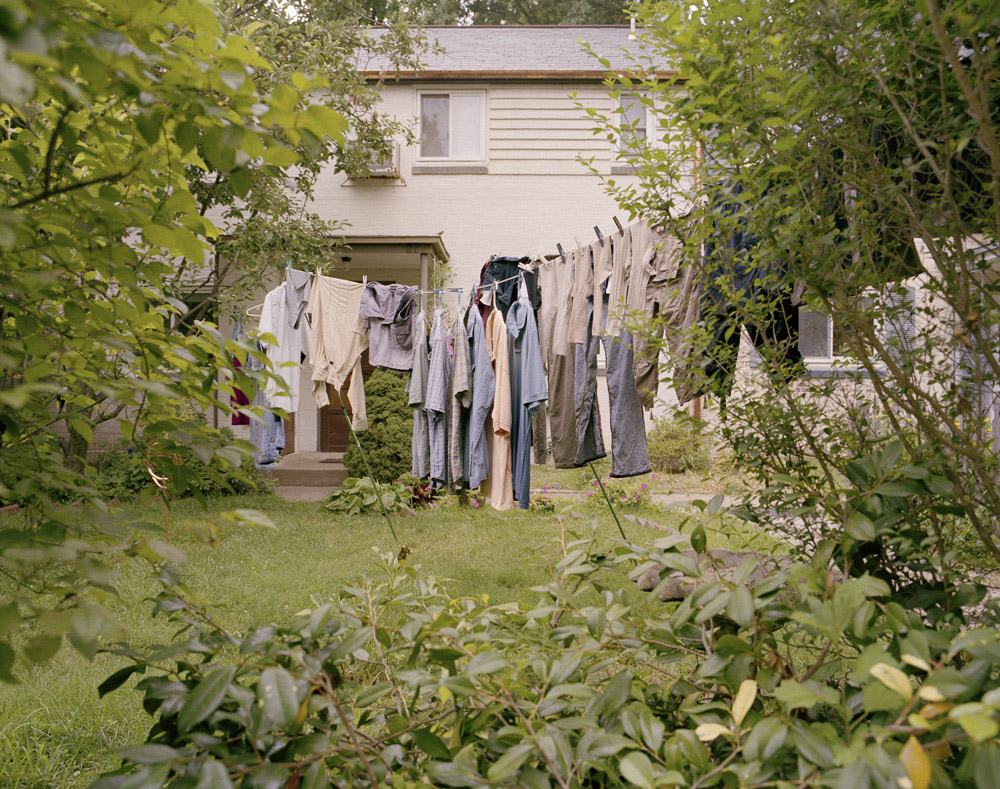 “While ‘likes’ on Facebook and Instagram can be gratifying, I think serious discussions and conversations about work are absolutely essential.

“Having a creative community to rely upon really forces you to articulate your thoughts about what you’re trying to communicate with your images. It’s a way to stay inspired and also a way to be held accountable.”

Linkedin
RELATED ARTICLES
OTHER ARTICLES
Photographer Sean Maung reflects on documenting a small town in Pennsylvania afflicted by high levels of unemployment, poverty, violence, crime, and addiction.
Jeffrey Henson Scales intimate portraits and protest images of the BPP and its leaders offer a rare insight into organisation at a time of societal upheaval.
David 'Dee' Delgado’s photo project is about honouring and uplifting the city of his youth, and a world rapidly disappearing under the relentless onslaught of gentrification.
Campaigners reflect on what the supreme court’s decision to allow buffer zones in NI means for the future of reproductive rights in the UK.
After blocking the Scottish government’s gender recognition reform bill, Westminster is now devising further changes to the law to make it harder for trans people to self-identify.
Activists and campaigners are fighting back against new laws that would seriously undermine the ability to take industrial action, calling it an attack on fundamental workers' rights.