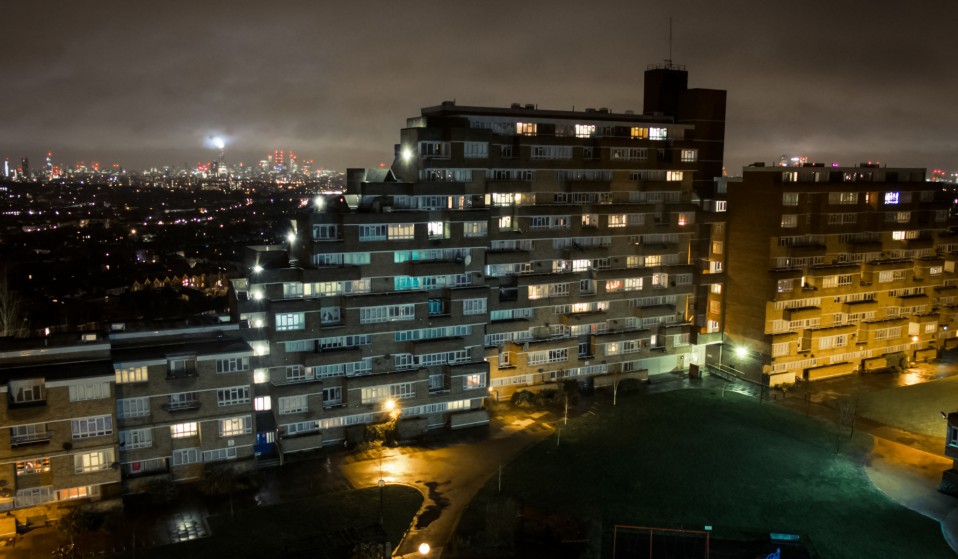 Over the last ten years, Keysound Recordings has become one of electronic music’s essential taste-making labels, under label boss, Rinse FM resident and all-round UK underground guru, Martin Clark (aka Blackdown). Vital to the label’s sound and success is Clark’s heightened awareness of the environments from which the sounds of grime, dubstep, funky house and other London-born genres emerged.

“One of the main ideas of Keysound is of keysounds being like sonic cornerstones,” explains Clark, “The records we were putting out were inspired by bits of London, so having pictures of those actual locations on the record sleeves makes sense because they start to explain where this music is from and why it sounds like it does.”

While looking for images to illustrate the sleeves of the label’s early releases Clark stumbled upon the work of Nico Hogg, whose poignant and witty photos of overlooked London have provided a perfect parallel to Keysound’s releases for nearly a decade. 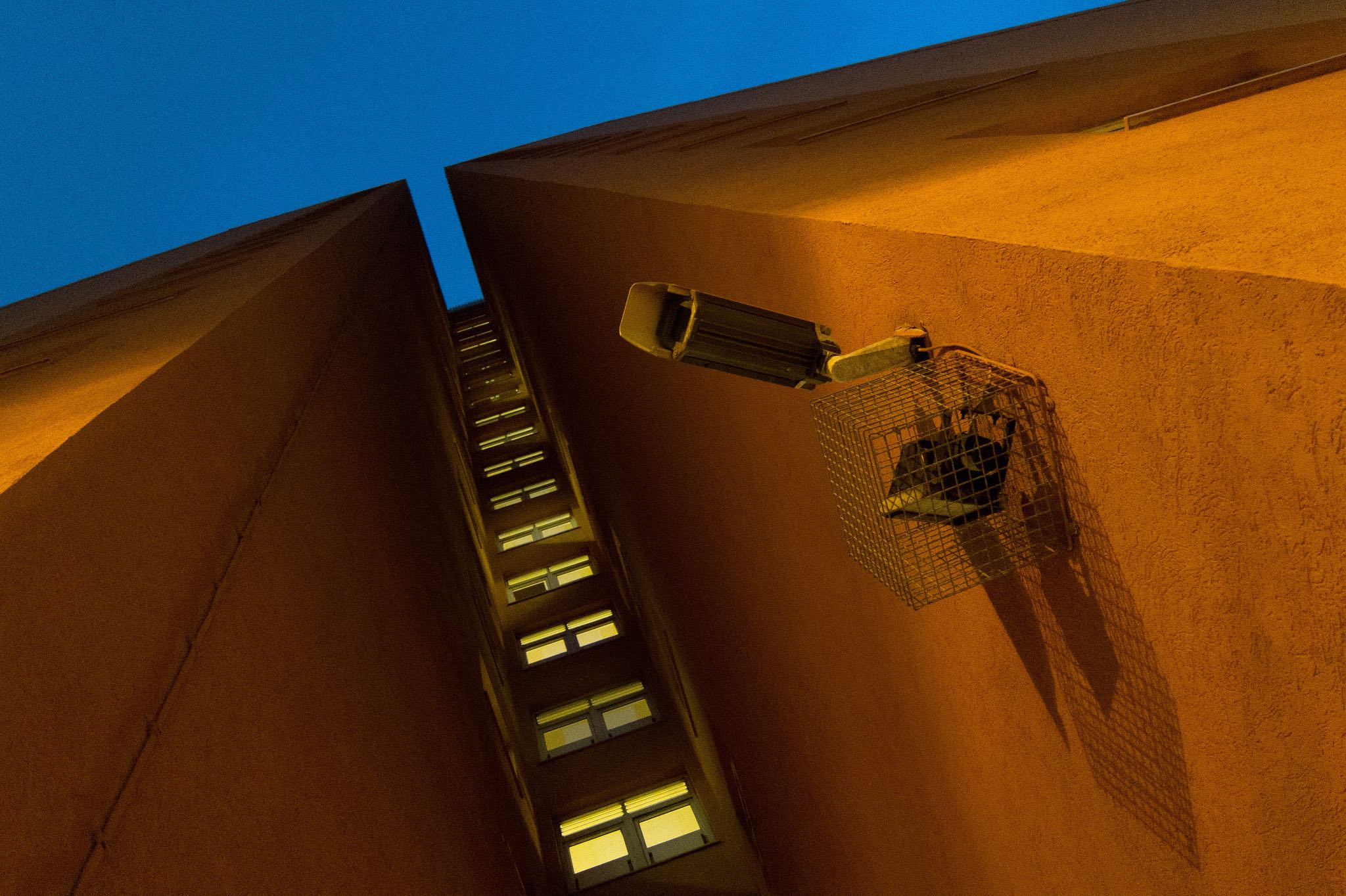 Following a bizarre twist of fate in which Chanel used Burial’s ‘Temple Sleeper’ (a 2015 Keysound release) in a fashion show without permission, the label found itself compensated and Clark was able to explore a new venture: “I thought right I’ve got a little bit of budget here, I’m going to put this back into the label and give Nico a chance.”

The result is Signs & Signifiers, a newly published photobook of Hogg’s work which is at once a stunning depiction of London architecture and a vital record of a decade of change on the peripheries of the metropolis. Huck chatted to Nico about putting together the book, the ordinary beauty of estates and London’s doomed future.

London is clearly a major theme in your work, but it’s a view of the overlooked areas of the city, especially the outskirts that you focus on. Why were these areas of particular interest to you?
Because that’s where I’m from. If you look at the bit of Tottenham where I’m from on a map you can see its right on the fringe between inner London and what you could call inner suburban London. Demographically it’s a blend of the two but in terms of the townscape it’s right on the cusp. So I always looked at the two and saw the distinctions very clearly. It also struck me that the classic London of Georgian streets and so on was very well documented, but a little further out into Tottenham, that was very poorly documented. I would go online and I would look for any proof that this place existed in any meaningful sense and it wasn’t there. So if nobody else was going to document these areas, then I would. 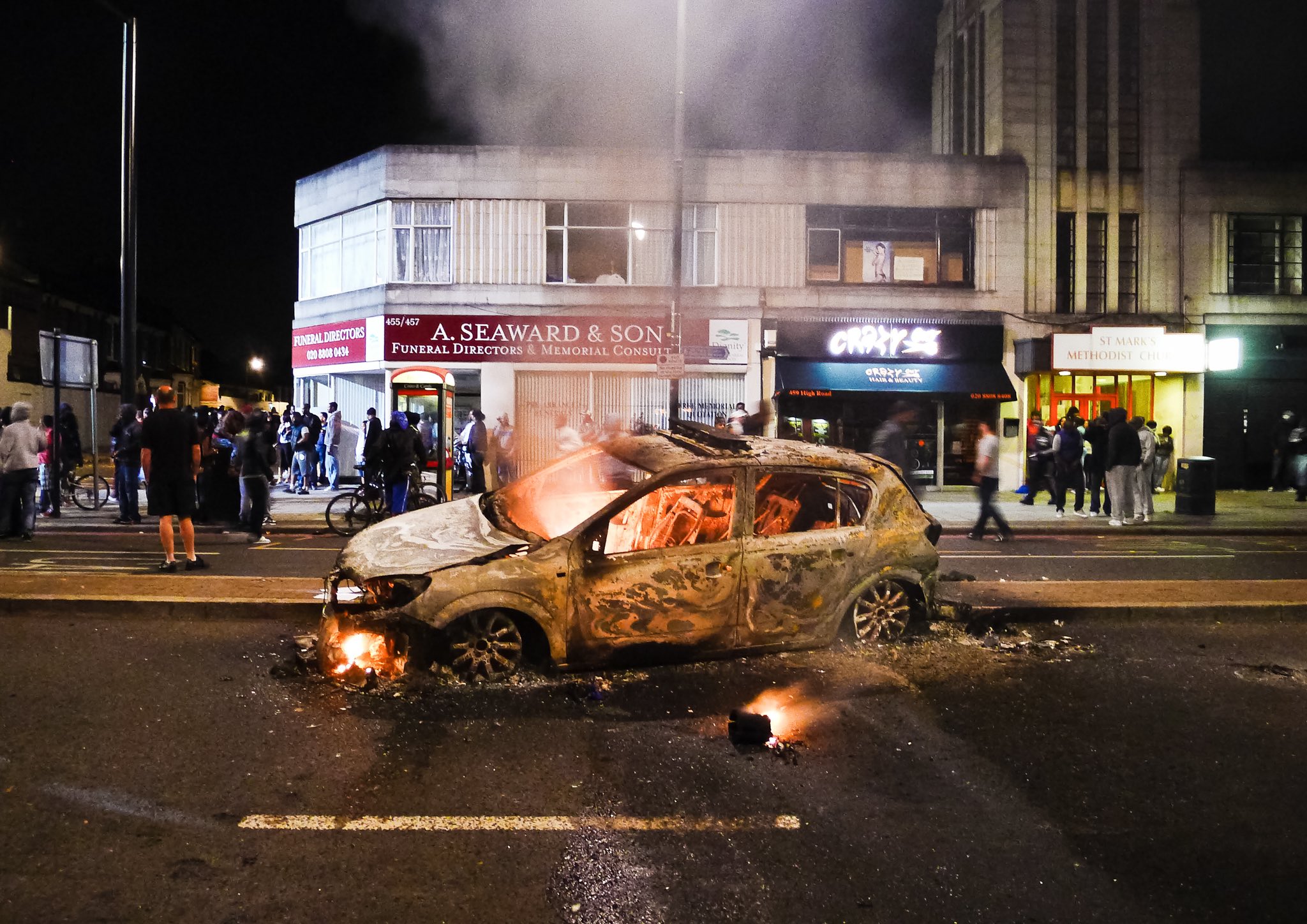 This idea of documenting is clearly important to you, do you see your work as a way of recording these areas, almost like a historical project?
It felt like it at the time. In hindsight I think it’s a little more nuanced than that. There was a drive to document elements of change in social housing. I grew up in social housing and I still live in social housing; it’s a very important thing to me. Clearly there has been a lot of change there and I have wanted to make a record of that: what’s been, what’s going, what’s replacing it and what’s the story behind that.

Social housing has been such a potent symbol of change in London over the last ten years, what would you see as the most significant changes in social housing that you’ve observed over that period?
All but a couple of what I would consider the most notorious estates have gone from the landscape; they’ve been completely redeveloped. When I started most of these already had masterplans in place, they were going to be pulled down and it was partly knowing that that was going to happen that kind of spurred be on to go out and make sure I got to these places before work really started.

For instance, the old Stonebridge estate in Harlesden: it’s been comprehensively redeveloped now, but it was such a forbidding place to be in its latter days. I’ve been to estates around the country of a similar architectural bent, and nowhere has really affected me in the way that Stonebridge did. It was a real warren of concrete, a kind of mazy place where you felt like you had to watch your back. 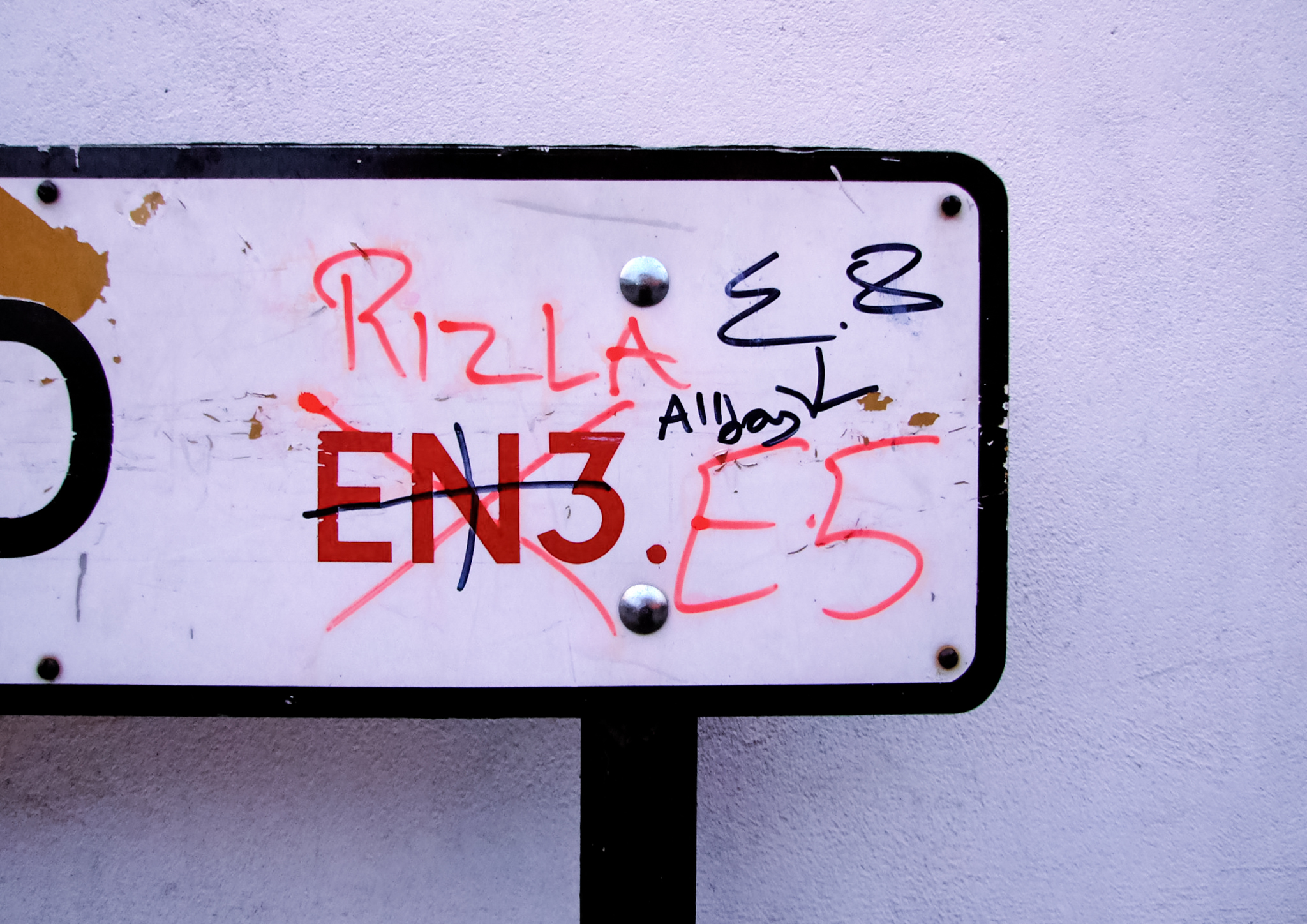 And was it replaced with more social housing?
Some of it was social housing. The fashion now is to have a higher density of housing that is more street oriented and within that mix you’ll have some social housing and some for private rental. The idea is that with a more balanced mix of households you will get a calmer sort of environment. But there’s a bit of the old Stonebridge in there, it’s not changed a huge amount.

There seems to be a tension in your photos between a critique of the mismanagement of the estates and a kind romanticism in the lighting and framing. How does that tension play out when you are shooting?
This is actually something which is still a conflict in my mind because there’s this media tendency to paint estates in the worst possible light otherwise no one will notice them. But I’ve always been happiest when I’ve been able to make a place look as ordinary as it can in a way which people will still appreciate. Really I want to do it for the people that live there. Often they will come back later and look at the picture and say, “Yeah, I used to live here and you’ve captured this place in the way I remember it”. It’s hard to try and really qualify it, but it comes from my experience of living on an estate and trying to ascribe a familiar feeling to that place in an image.

In one section of the book you capture conversations occurring through graffiti and the conflict between these informal messages and the signage of local authorities. What drew you to these?
I always enjoy it when a piece of officialdom or an edict is cast down. I also think I appreciate seeing things like that because in a lot of these places it’s difficult to get a sense of any kind of community communication or cohesion and this is a kind of evidence that it is there in a strange little way. It’s that and it’s the general speed with which the authorities will quash that conversation by scrubbing the graffiti away. A lot of these conversations won’t last long and that in itself feeds back into how the council will feel about how they are managing the place. Often there is a big rift between the condition that an estate’s in, the opinions of the tenants, and how the council feel they are doing managing the place. Often there is very little communication between the two parties and so these little conversations are like shout-outs, little cries of frustration. I like to document those. 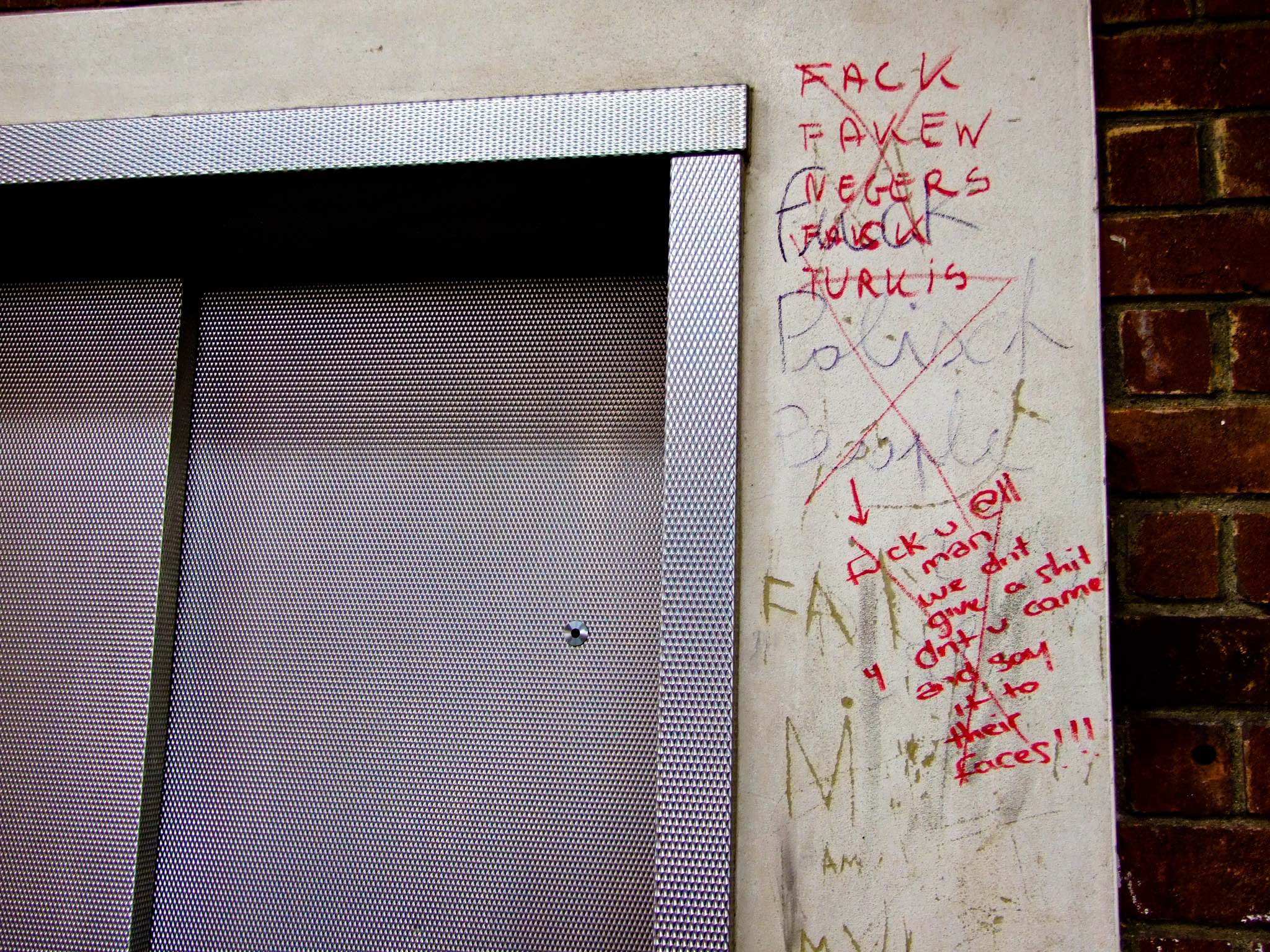 Based on your observations of the city over the last ten years, how do you feel about the direction in which London is going?
I am deeply concerned. I think a lot of what I’m capturing in London now is slowly being washed away. The whole strata is just going to vanish in the next 15 years and I feel like I’m probably going to be disappearing with that tide, so it’s quite a personal concern for me. The result’s going to be you’re going to have a movement of populations to the very margins. Borders, edges and margins of places are something that I’ve always thought about when I’m out shooting. I mean a suburban area is not just a suburban area, it’s an area that exists having received an influx of people from somewhere at a certain time and a certain culture has developed as a result. And we are going to get that happening again and again and again as people get priced out of inner London. I can keep looking for these manifestations and things that signify that change where I can, or at least I’m certainly going to try to. 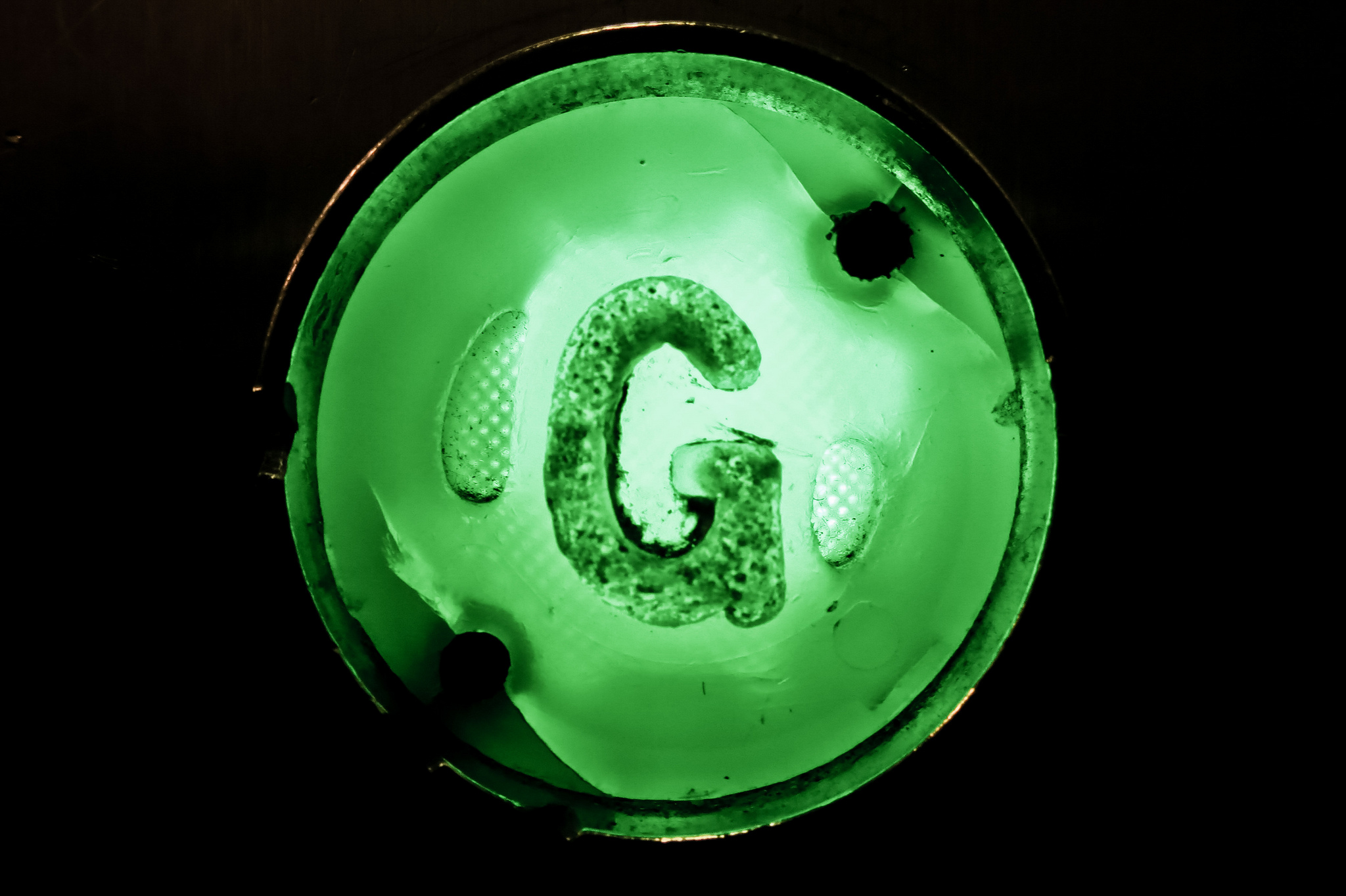 So in terms of actually putting the book together, how did you find the process of taking centre stage and putting all your work in one place?
Although I’ve enjoyed documenting things in a certain way and immersing myself in these townscapes, I’ve never really had any urgency to pull it all together into one cohesive body of work. It’s taken Martin Clark, the spirit of Keysound and the realisation that we are both looking at London in the same way to bring this together. The music is kind of reflecting London in that manner as well. It’s taken all that coming together for us to be able to produce the book and I think we’ve done it quite well. I think it sings the same sort of tune – it feels like a Keysound product.

Check out Nico Hogg’s Signs & Signifiers and download a free chapter over at Keysound.

Linkedin
RELATED ARTICLES
OTHER ARTICLES
Cindy Campbell recounts how her brother ushered in a new era of musical culture at a party she held in the Bronx in ‘70s.
Financial turmoil is pushing people who work in the sex industry into more dangerous and desperate situations as a means of survival.
As the Scottish government announces a rent freeze, an activist with Living Rent who fought and won shares how they did it, and what must come next.
The workforce is now gearing up for industrial action after receiving a measly pay rise, reports Ella Glover.
A group of young Palestinians have found temporary freedom in the act of parkour, reimagining wreckage and ruins as a series of high-octane playgrounds.
Photographer David Corio’s archive offers a glimpse inside a revolutionary era of music and nightlife.