Art & Culture / Photography / The photographer using a camera to make sense of Dakar, her new home 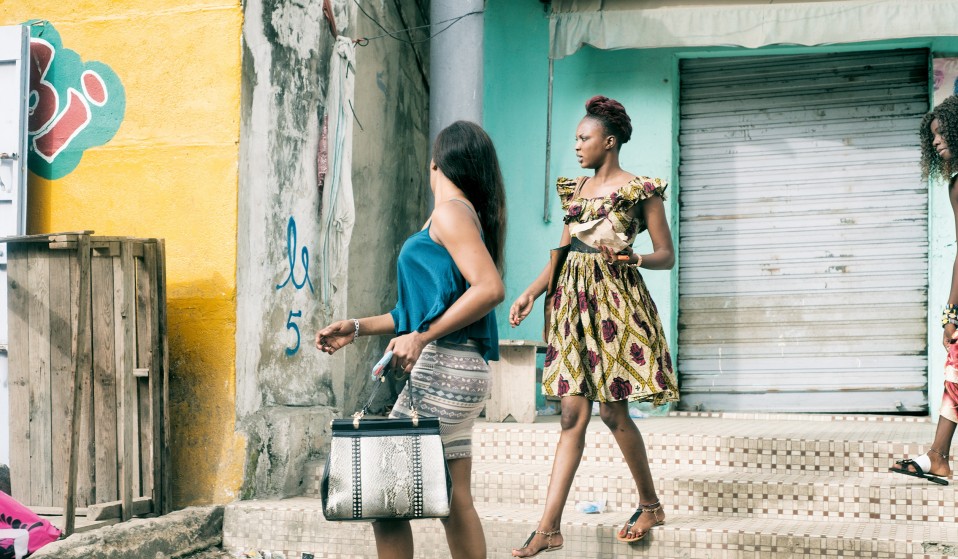 When Emmanuelle Andrianjafy moved from Paris to Dakar she felt like an outsider in her new home. She picked up a camera, and soon the city made sense.

When Emmanuelle Andrianjafy moved from Paris to Dakar she felt like an outsider in her new home. She picked up a camera, and soon the city made sense.

Madagascar-born photographer Emmanuelle Andrianjafy didn’t feel at home when she first moved from Paris to Dakar back in 2011. That feeling didn’t just come from having moved continents again, everything about her new surroundings felt alien. To Emmanuelle the Senegalese capital was unfamiliar, chaotic and vibrant, permanently in a cycle of destruction and reconstruction, unlike anything she had experienced before.

It would’ve been easy to shut herself off – to choose to interact as little as possible with her new home and remain a distant outsider. But Emmanuelle chose not to. She picked up a camera, feeling for the first time the need to photograph, and took to the streets, at first alone and then with an interpreter, immersing herself completely in the city she now calls home.

Nothing’s In Vain is a collection of images taken by Emmanuelle during that process of understanding and exploring – a book in which photographs become words, telling stories of all the multitudes of Dakar. 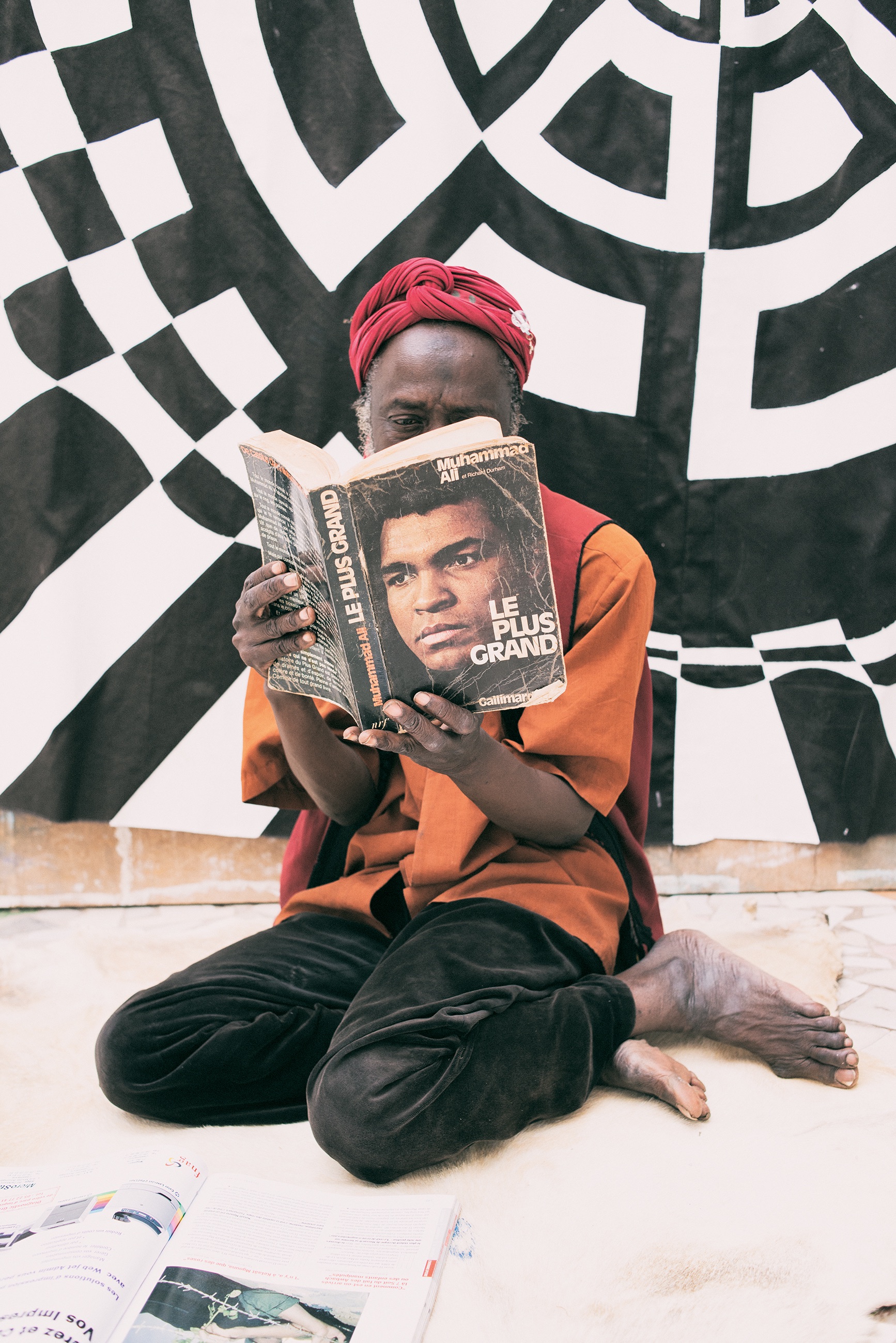 How would you describe Dakar to a complete outsider?
Dakar is a coastal city, an immense construction site, loud, undisciplined, in transition, energetic – it’s alive. For me, it’s a place that constantly raises questions. The landscapes of Dakar manifest human instincts, traits, and emotions I only experience here. They reflect our time. The atmosphere is draining. Things are simple and complicated at the same time.

I think it’s a city you have to experience in order to get a sense of it. We respond differently to places. I tell people who ask about Dakar they have to see for themselves, not for one or two weeks, but for much longer, because I believe time is necessary. There is so much information to absorb from the city. And to those interested in coming, it’s a safe place.

Having grown up in Madagascar, were there any familiarities at all you could feel between Senegal and your home country, or was everything radically different?
I left Madagascar 17 years ago and although I went back almost every year, it has been a long time, so I don’t really know if I have an answer to this question.

I can honestly say I did not expect to be disoriented by Dakar. Though it doesn’t entirely define us, we [Madagascar and Senegal] are former French colonies, and developing countries. I’m often frustrated to not understand the situations we are in, and discouraged by the solutions we design – those are the feelings that prevail. Many things feel like a déjà vu, new and different at the same time. 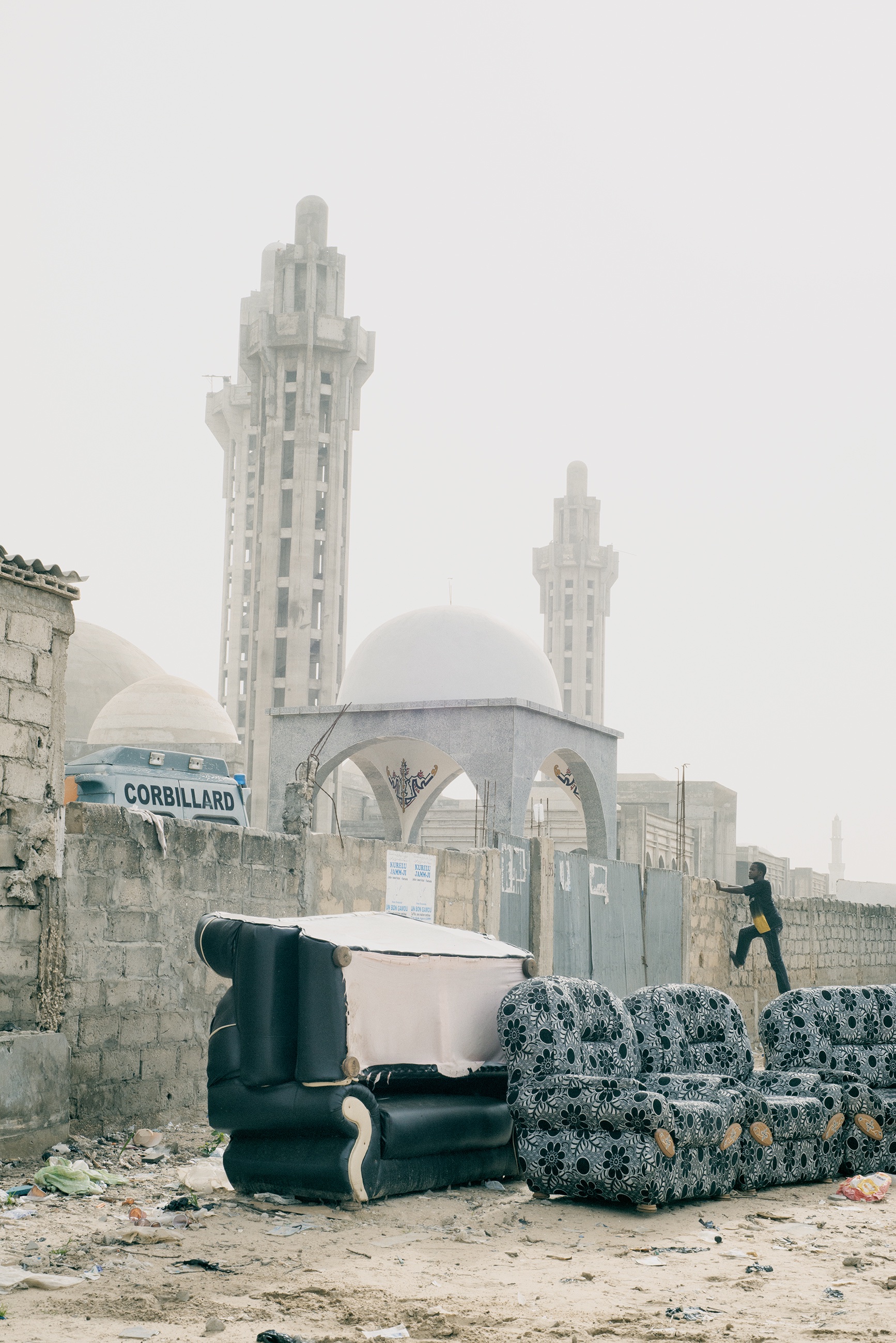 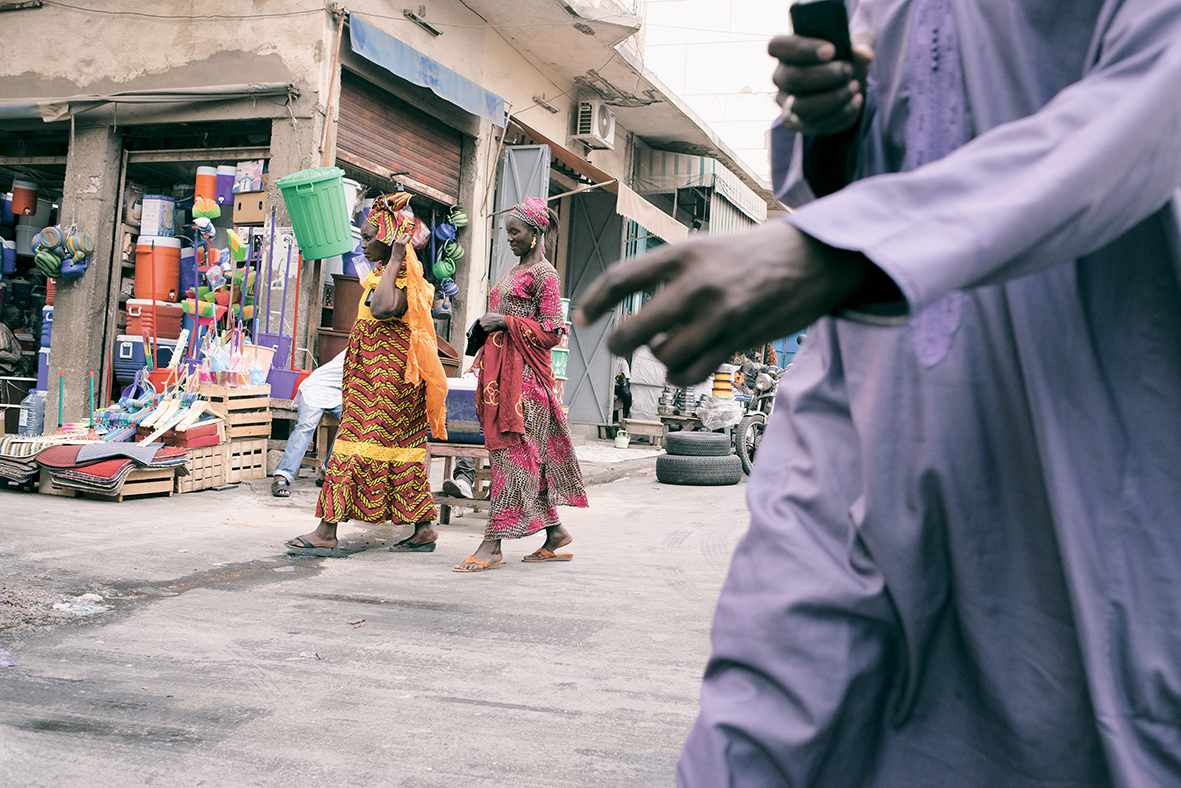 Going from being an electrical engineer to a photographer must’ve been quite a change – what inspired you to pursue photography?
When I started feeling uncomfortable in Dakar, it [photography] felt logical, because I wanted to understand [the city] – to confront it. It simply turned out I can photograph, and that’s how it happened. Photography, at the time when I started back in 2013, was a means to clarify my relationship to the city, to express myself, the same way I guess one would write. That was the first time I felt the need to photograph. I owned a camera since 2009 and I could take pictures before – like anyone else I guess.

Would you consider yourself self-taught, and if so, do you feel like that influences your way of photographing at all?
I do consider myself self-taught, although I did attend a workshop – Atelier Smedsby – during 2 years while working on this project. The workshop helped because I had no idea how to start and structure the project. When you’re new to a field, it helps to have people who can advise.

I don’t feel influenced by any photographer, I don’t feel the need to conform to a specific visual or photographic language, I feel unrestrained. For this project, I was quite clear why I wanted to photograph. I found my method which was simply to experiment, to photograph intuitively, and to produce – which seems obvious, but is not always simple.

I’ve learned that time is also essential to my photography. This is not a project I could have finished in a couple of months. I needed the time to form my impressions of the city, to explore – which started before this project itself began. The time to get acquainted to the pictures, the time for editing. 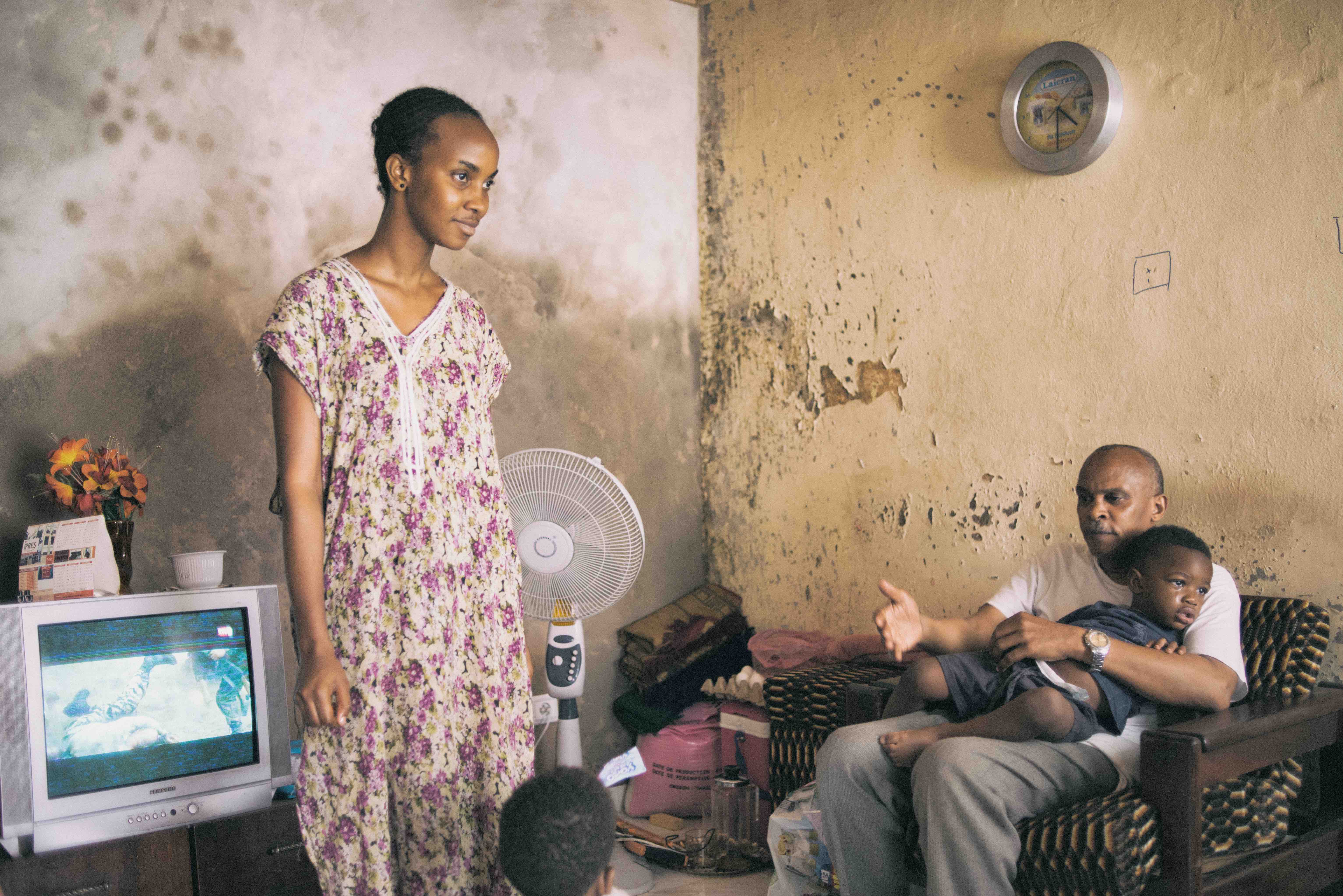 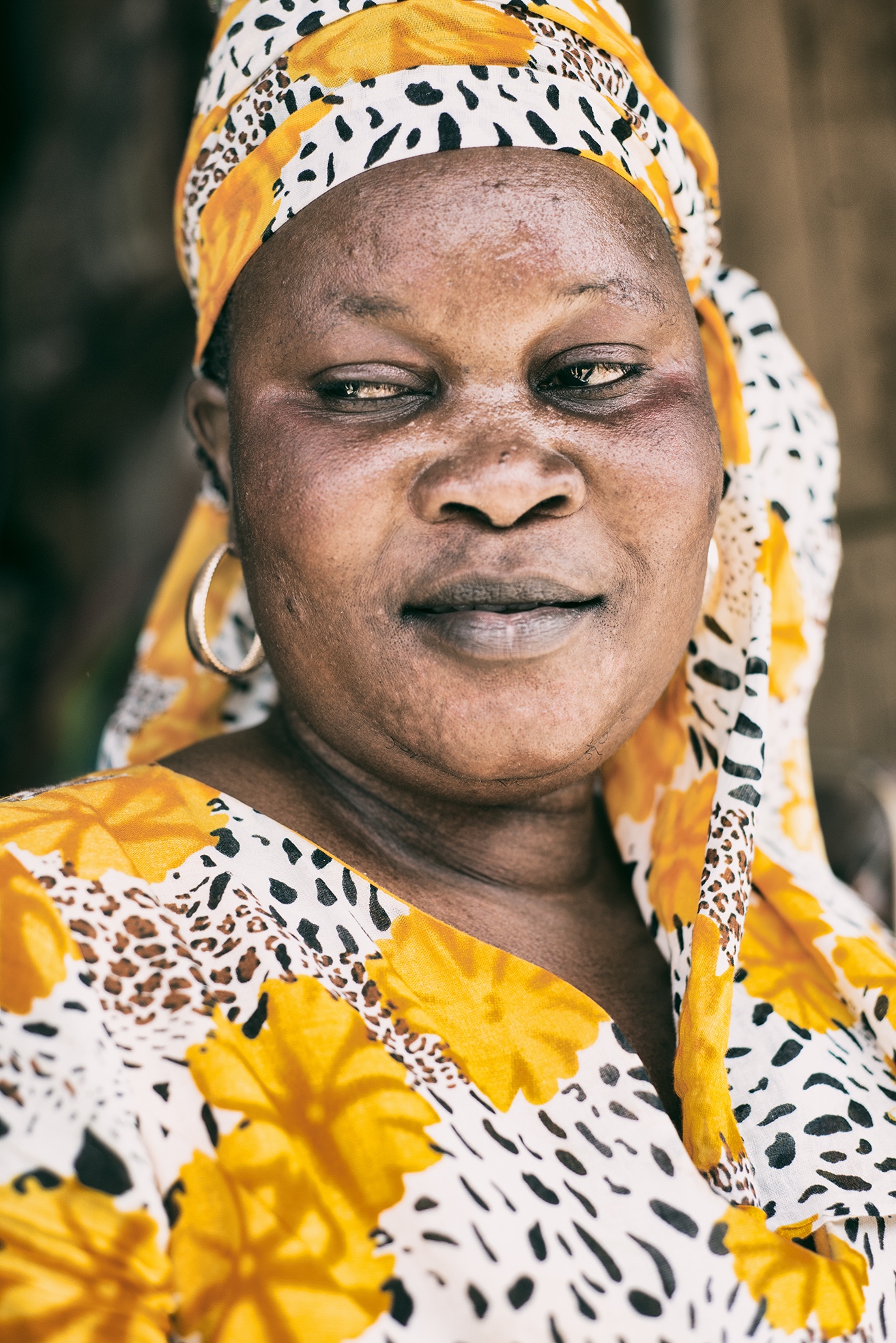 In Nothing’s In Vain, you give us a glimpse into people’s homes – how did you build that relationship of trust?
Dakar is not a camera friendly place – that was my main issue when I started photographing. It doesn’t help that I don’t have a way with people and that I naturally tend to avoid human contact, as it is exhausting for me, generally speaking. So I hired a fixer. It helps to be accompanied by a local and that is how I got access. Sometimes we went to see family and other times simply entered random houses. For interiors, people were comfortable because I was with someone they could trust.

For portraits, we would walk the streets, and when I was interested in a person, the fixer would start the conversation. It started with long greetings, introducing ourselves, he would explain that we’re exploring the city, and in the very end he would ask if I could take a picture. Nothing complicated – for him. The discussions with the older people were about my origin, the neighbourhood, family, religion, and ended in prayers. With the younger ones, not much talking was involved, I guess they were simply happy to get portrayed. We did get quite a lot of refusals.

However, once I knew I wanted to make a book out of the project and needed more portraits, it was more straightforward and to my surprise easier: we mentioned it was for a book, showed the dummy and people agreed. 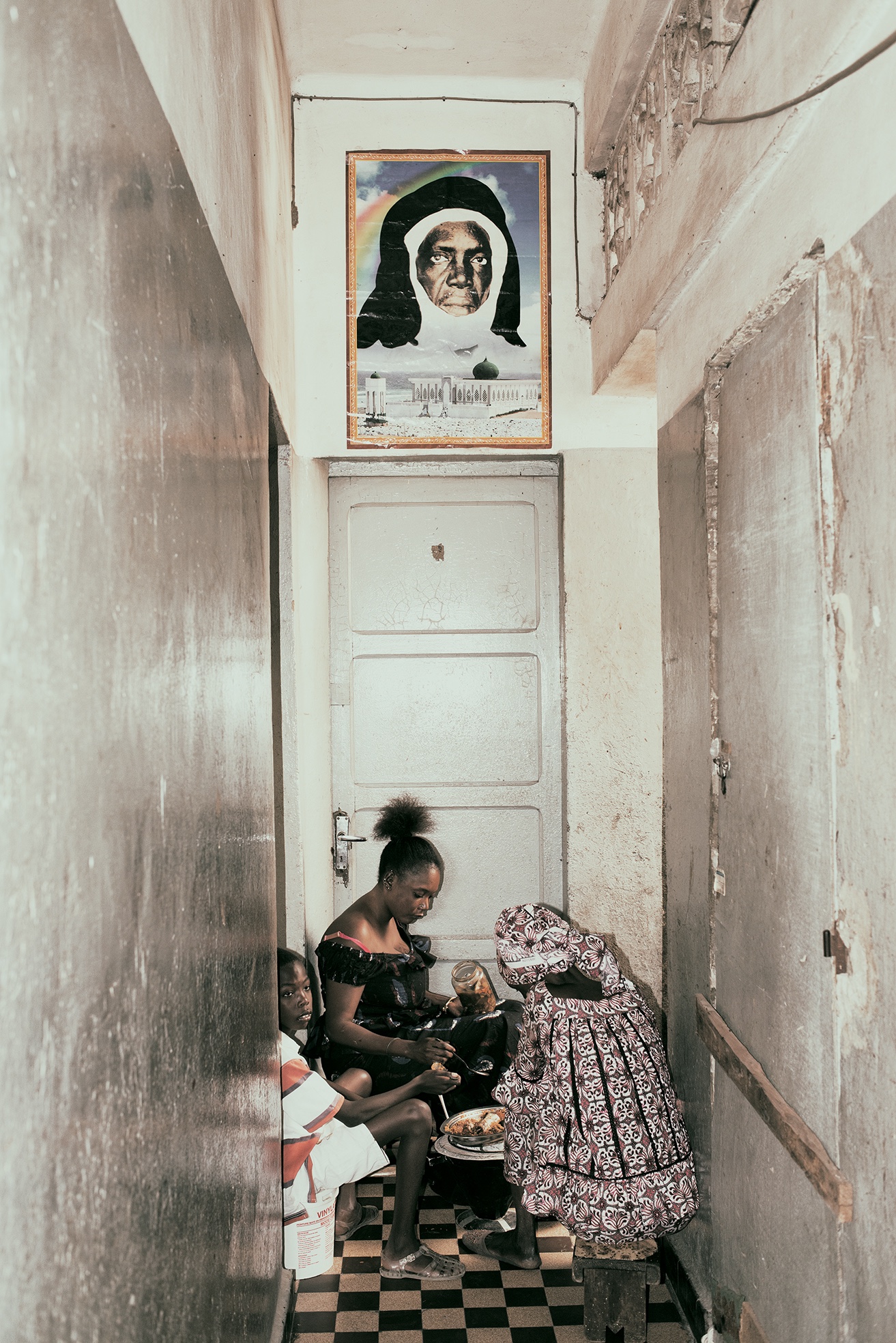 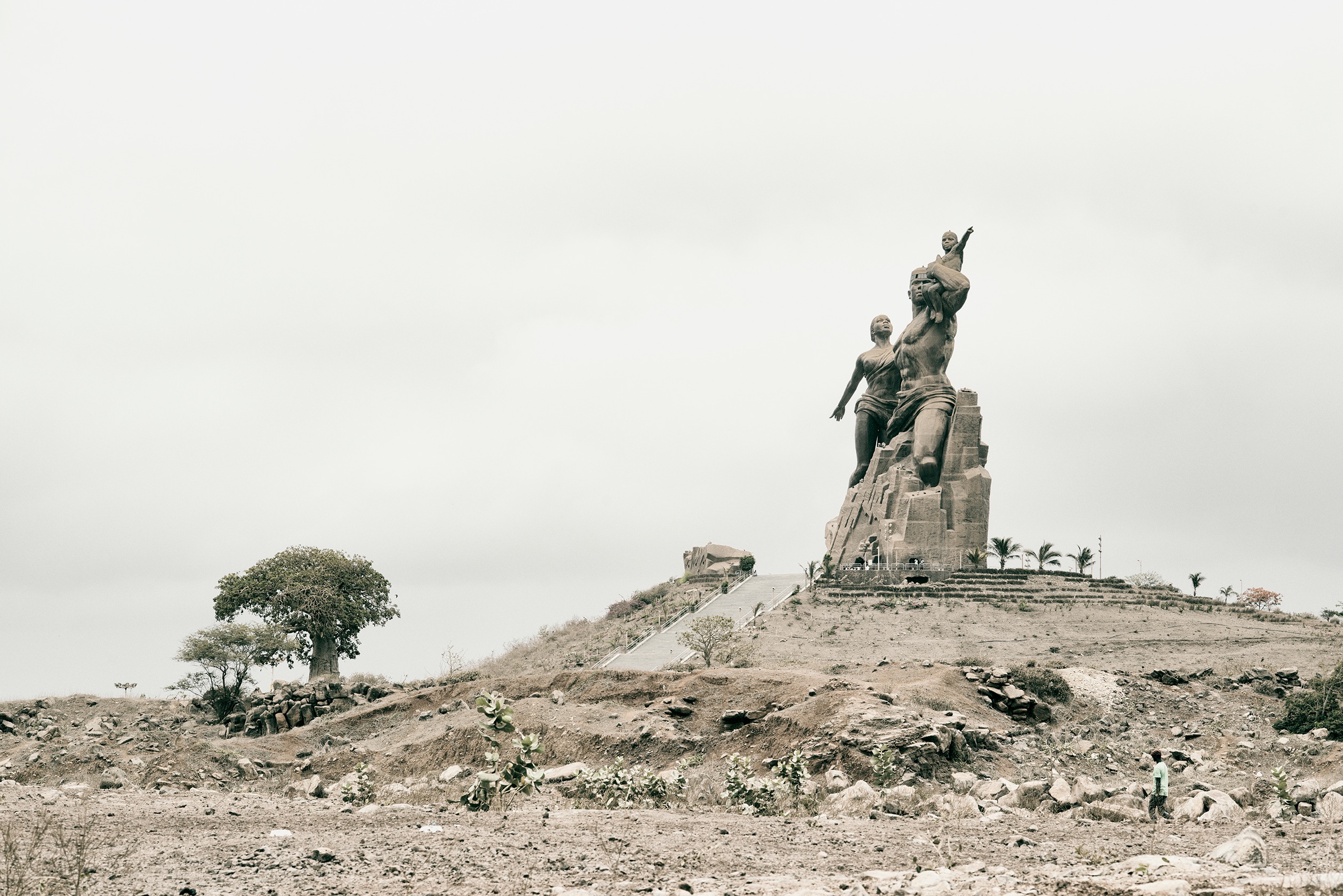 As an outsider, what captured your attention most when photographing the people and streets of Dakar?
I guess it’s the physical landscape first. The ocean. The land is flat, dry, almost treeless. Sandy streets, constructions, abandoned structures. Then the presence of people. I’m aware of an ambience, a general feeling. But the streets are just like any streets, it’s a scene, with buildings, houses, people, shops, animals, etc.

I simply observe. It’s hard to plan anything in the streets, you just have to be there and things happen. I just chose the neighbourhood I want to photograph. There’s a picture of a young man standing on a sofa in the street looking over the wall of an immense mosque under construction. I went to that area several times because I was intrigued by the mosque.

As for choosing the people for portraits, it’s not something I can always explain. Like I explained, with the fixer we were just walking the streets and I would observe and select those I felt had something. It could be elegance, an expression, tenderness, age. 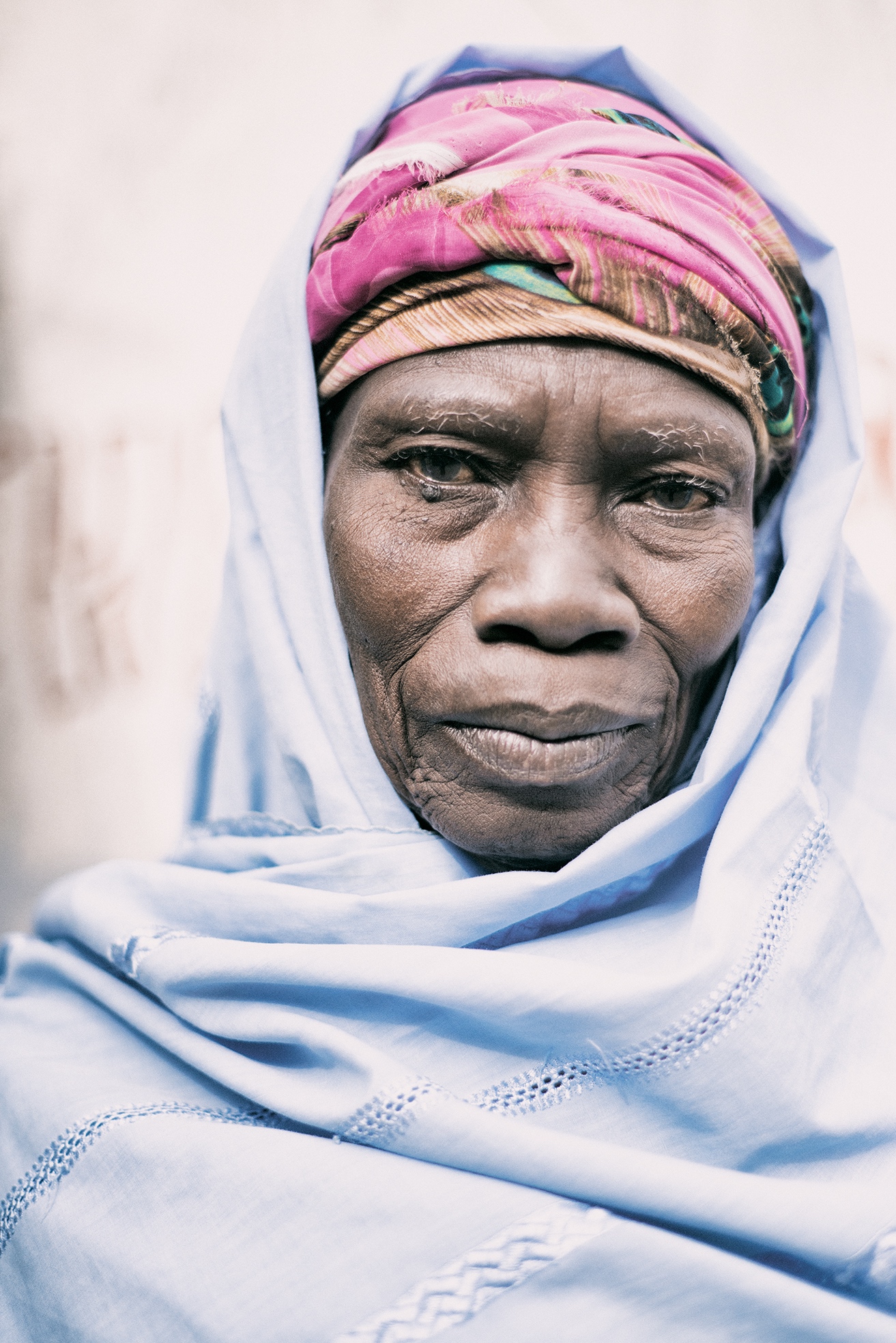 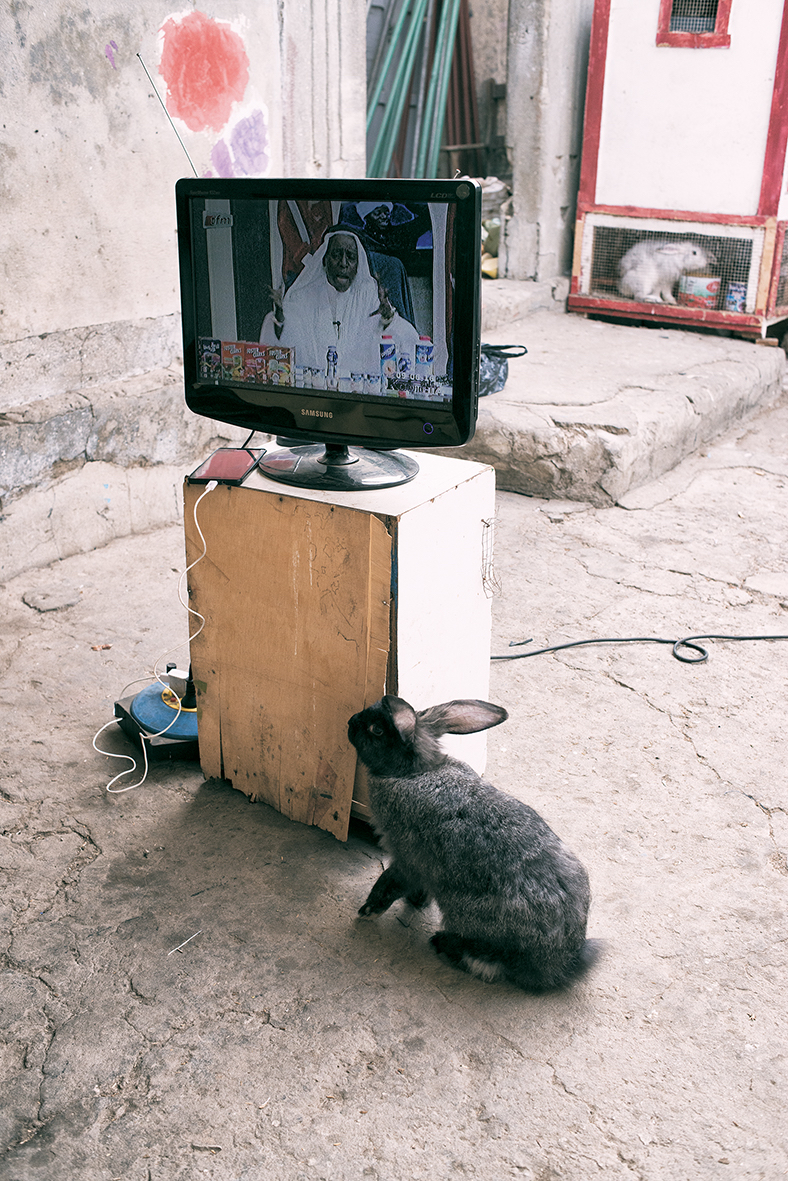 Did anything take you surprise when you were out shooting?
Several times I was close to being attacked physically because I was photographing the streets. It’s not a pleasant experience being surrounded by angry people. It was also one of the reasons why I hired a fixer. However I would say that doing the portraits turned out special.

For a couple of months I refused to consider taking portraits because people are not my main interest. I didn’t feel comfortable approaching people I did not know personally for a picture. I was convinced it wouldn’t bring much to the project. In retrospect, I don’t regret having gone through the process, even though it was a laborious one for me. I’m also satisfied that I used a method where everyone was comfortable. I find the portraits sensitive and powerful. The book would have been quite different without them.

Considering this ​has been described as quite a personal project of discovery, do you have any future plans for another photographic series?
I have now lived half of my life abroad. My parents and my brother live in Madagascar. I miss and don’t miss my home country, and I feel disconnected to it in many ways. I will be going back to Madagascar.

Nothing’s In Vain, by Emmanuelle Andrianjafy is out now, published by MACK.

Linkedin
RELATED ARTICLES
OTHER ARTICLES
David 'Dee' Delgado’s photo project is about honouring and uplifting the city of his youth, and a world rapidly disappearing under the relentless onslaught of gentrification.
Jeffrey Henson Scales intimate portraits and protest images of the BPP and its leaders offer a rare insight into organisation at a time of societal upheaval.
Photographer Sean Maung reflects on documenting a small town in Pennsylvania afflicted by high levels of unemployment, poverty, violence, crime, and addiction.
Yohon Tatum, aka Legendary Father of the House of Tisci, reflects on nurturing a new generation of talent.
A new podcast is opening up the conversation between trans women and trans amorous men in the hope of building coalitions.
Campaigners reflect on what the supreme court’s decision to allow buffer zones in NI means for the future of reproductive rights in the UK.