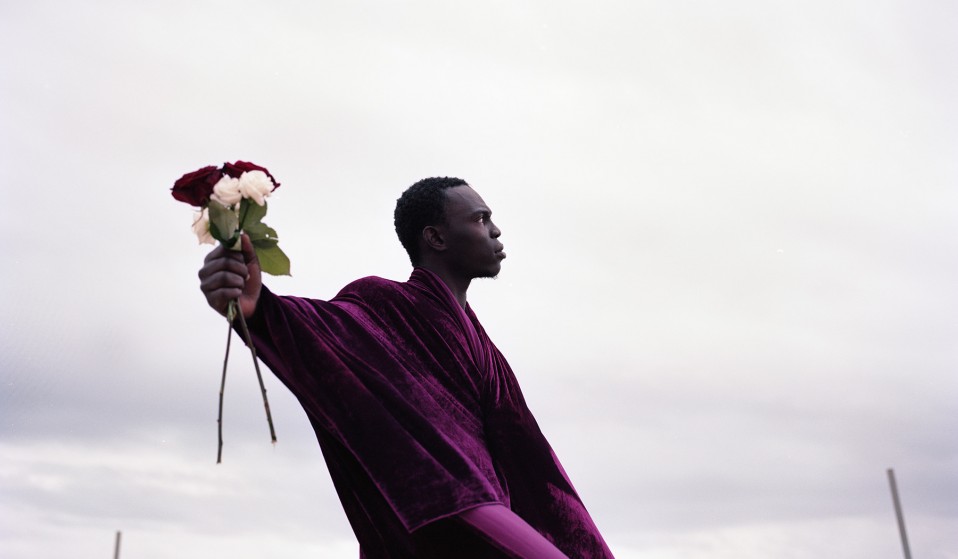 Sickened by dehumanising media coverage, Daniel Castro Garcia and Thomas Saxby set out to present an intimate and empowering portrayal of migrants' lives.

Sickened by dehumanising media coverage, Daniel Castro Garcia and Thomas Saxby set out to present an intimate and empowering portrayal of migrants' lives in ‘Foreigner: Migration into Europe 2015-2016’.

In November 2015, photographer Daniel Castro Garcia was standing on a beach in Lesbos, Greece. A number of dinghies had just arrived from Turkey, and as the wet and weary refugees they carried jumped out of the flimsy boats on to the shore, an army of photographer were lying in wait.

“I remember moments when there were five, six, ten photographers around me,” Daniel says, “photographing exactly the same thing I was and all you could hear was, click, click, click, click. There was almost something incredibly violent about it. It was a moment where I had to shake myself and think, ‘This is not why I’m here, this is not the way we wanted to present this story.’”

Foreigner: Migration into Europe 2015-2016 is an attempt to challenge the tired and dehumanising portrayal of the migration crisis that we’ve become all too familiar with in mainstream media. The remarkable photobook comes from John Radcliffe Studio, which is a collaboration between photographer Daniel and designer Thomas Saxby. 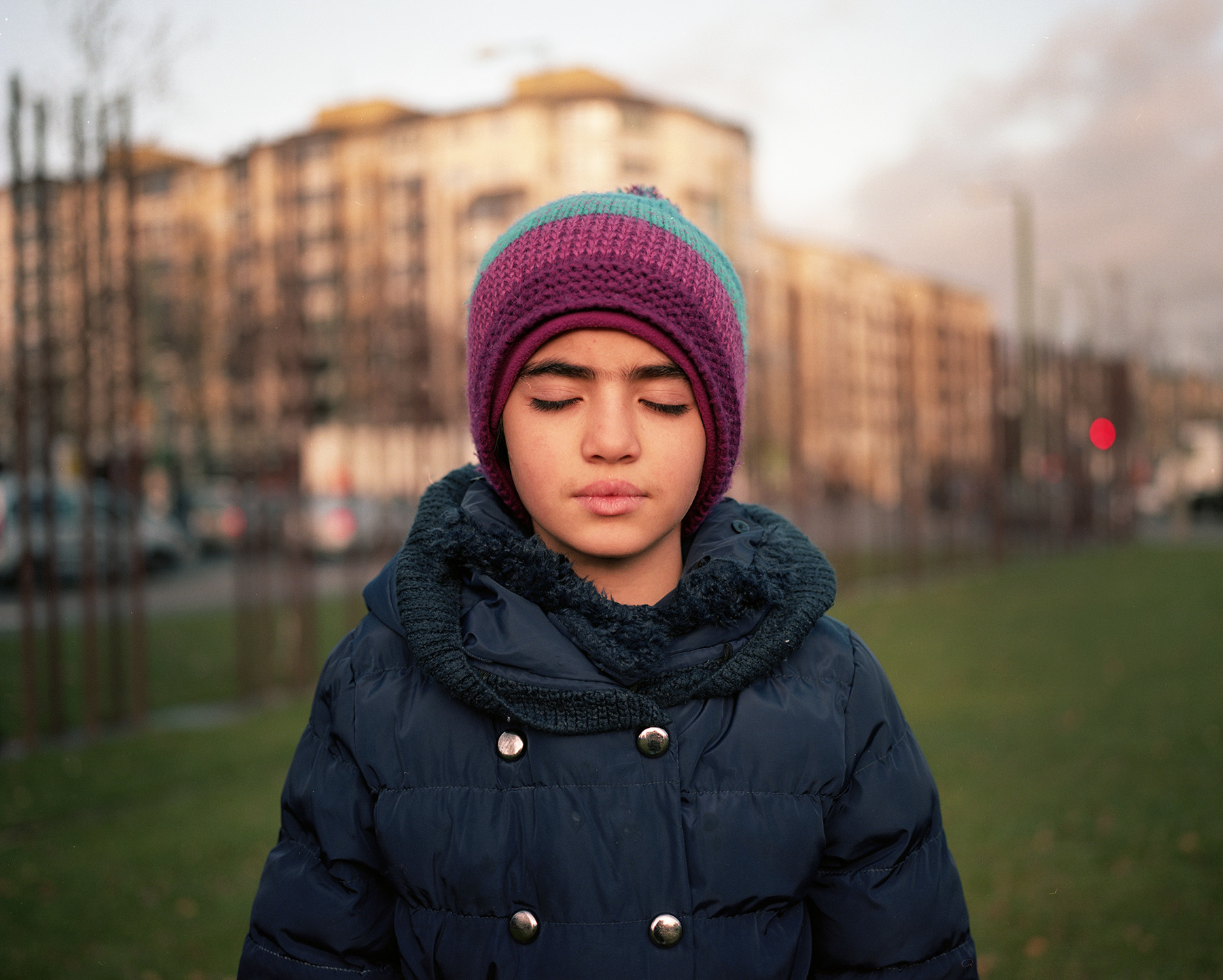 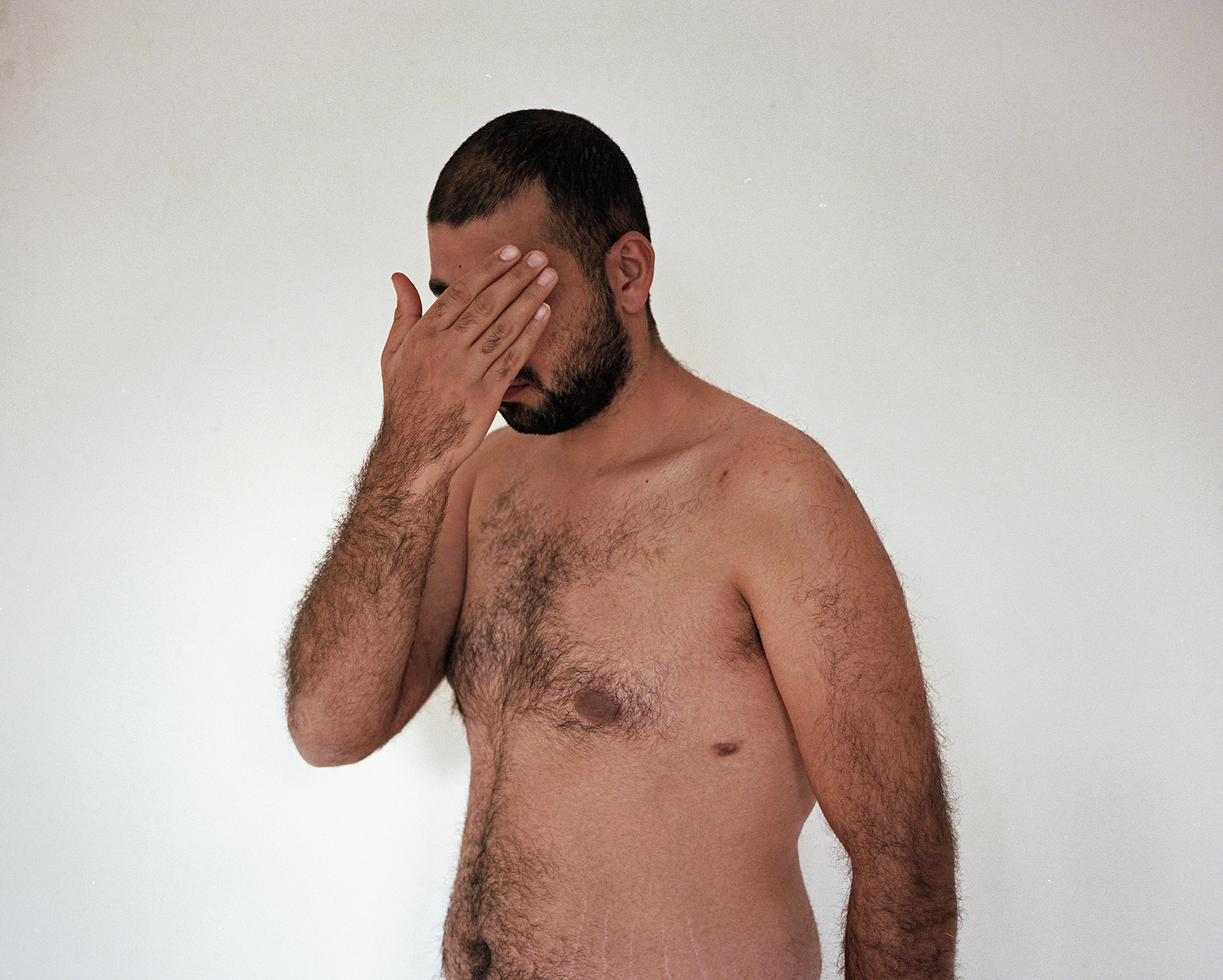 The project began in earnest in April 2015, when two boats capsized in the Mediterranean, leading to the loss of nearly a thousand lives. “The media reaction in the UK was quite perverse,” Daniel remembers. “Reports used words like ‘swarms’ and ‘cockroaches’. We both felt that the image-making, the writing and the analysis around this subject was very sensationalist and very cold, using over-dramatic shots of great masses of people, faceless crowds. We felt that there was an opportunity to focus on people and tell more human stories.”

The pair took a totally different approach to documenting the refugee crisis, embarking a long-term project that saw them create intimate portraits with a large medium format film camera across the continent. “We were trying to create images that went against what you’d see on the front pages of newspapers,” Thomas explains. 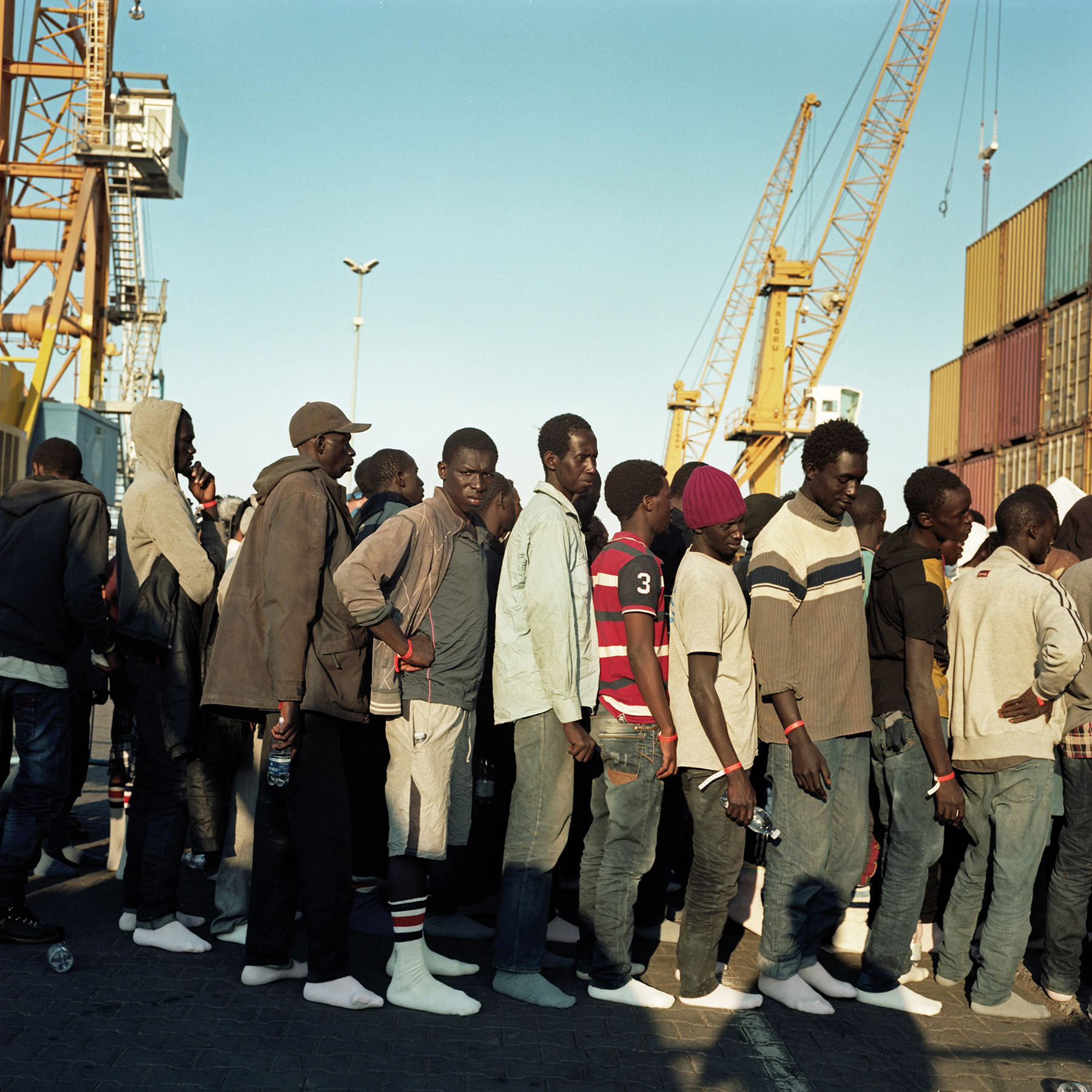 Port of Catania, Sicily, Italy, June 2015. A queue of migrants wait to be processed by the Italian authorities. Upon arrival the first items people are given by the Italian Red Cross, are a bottle of water and a pair of white socks. 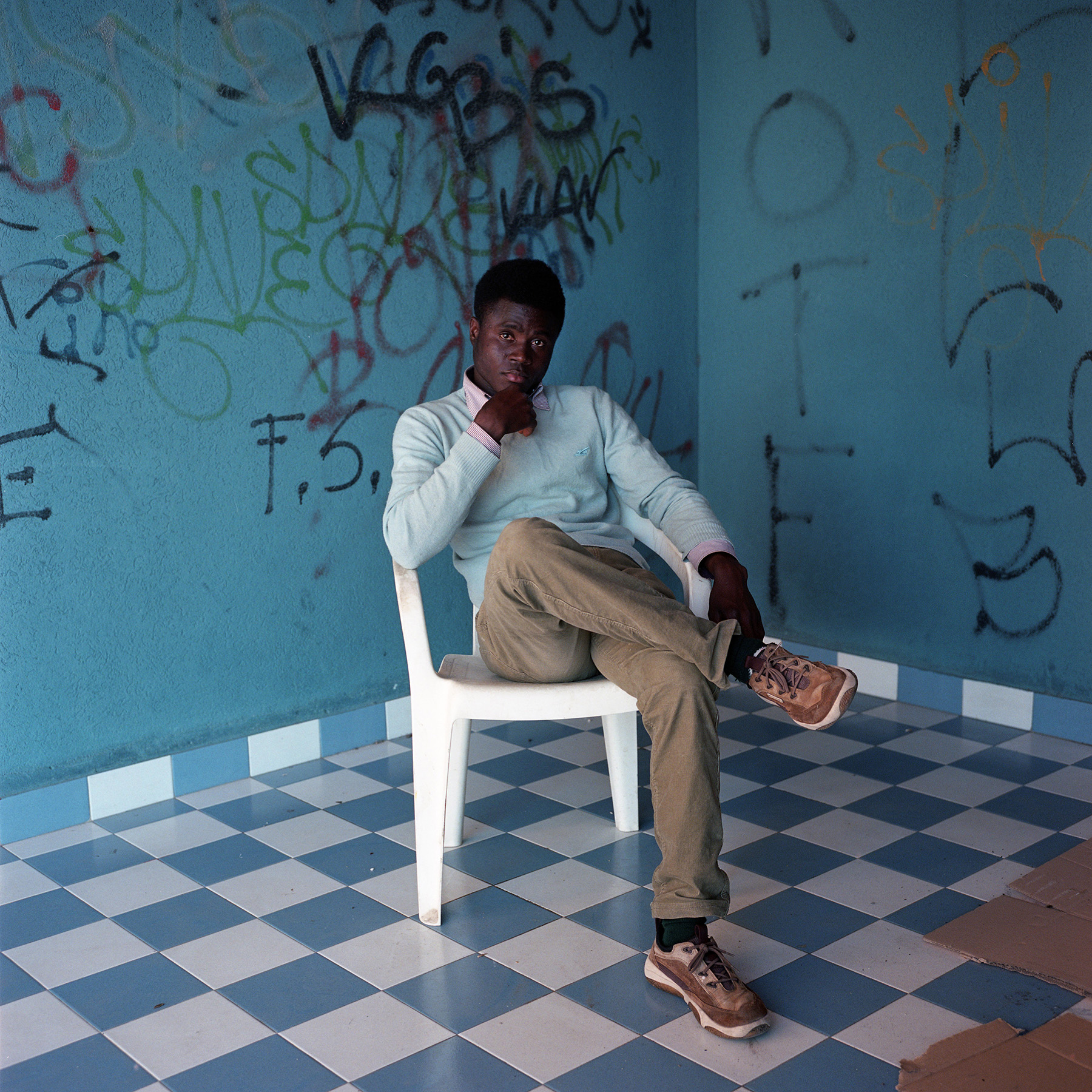 In just over a year, Thomas and Daniel criss-crossed Europe, stopping to talk and photograph with migrants, attempting to follow as many of them as they could at different points in their journey. They passed through hotspots including Lampedusa in Italy, Lesbos in Greece, Catania in Italy; the Calais ‘Jungle’ refugee camp in France and Idomeni in Greece, but unlike coverage elsewhere, they were conscious of giving a voice to the people they photographed – through images and text. 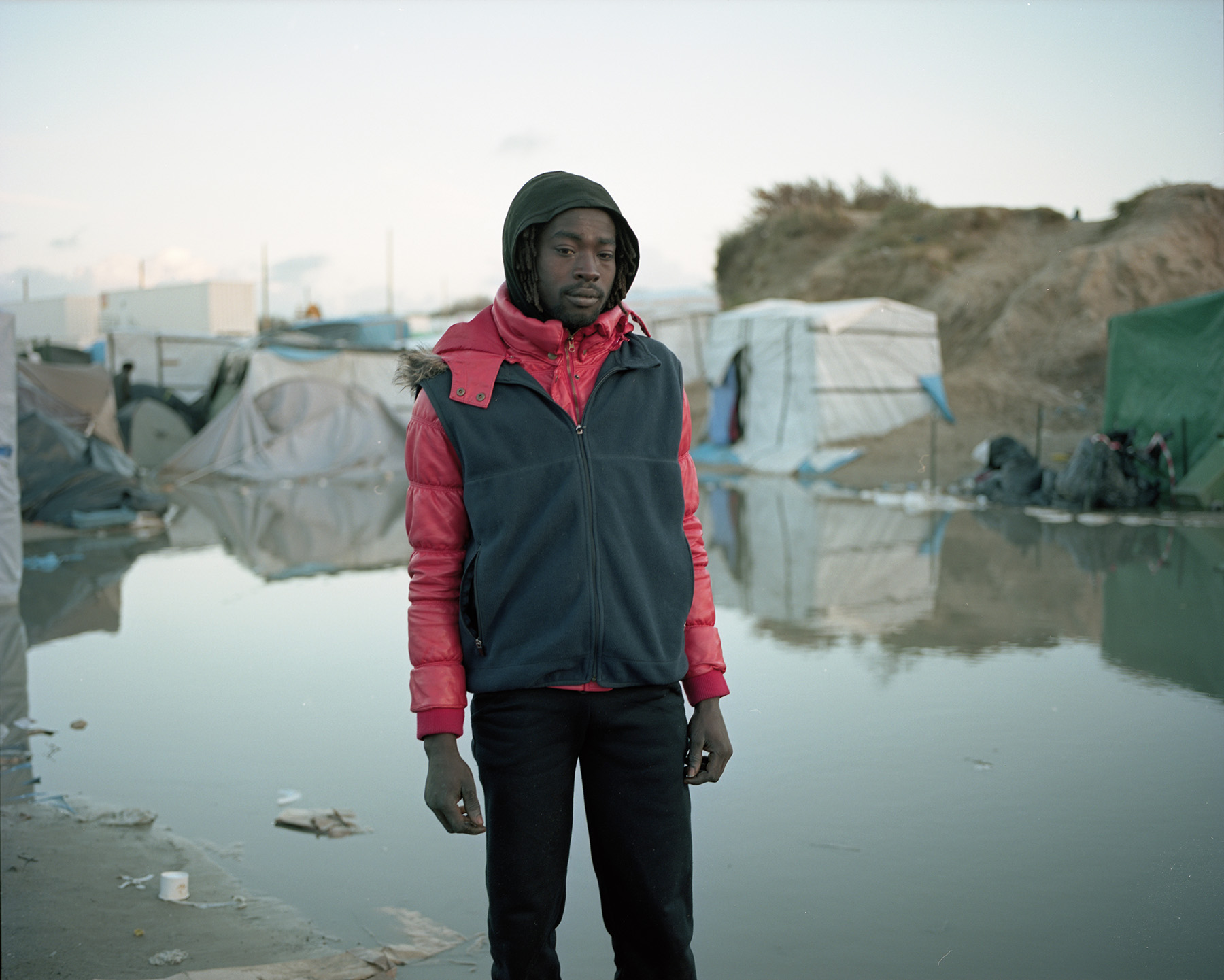 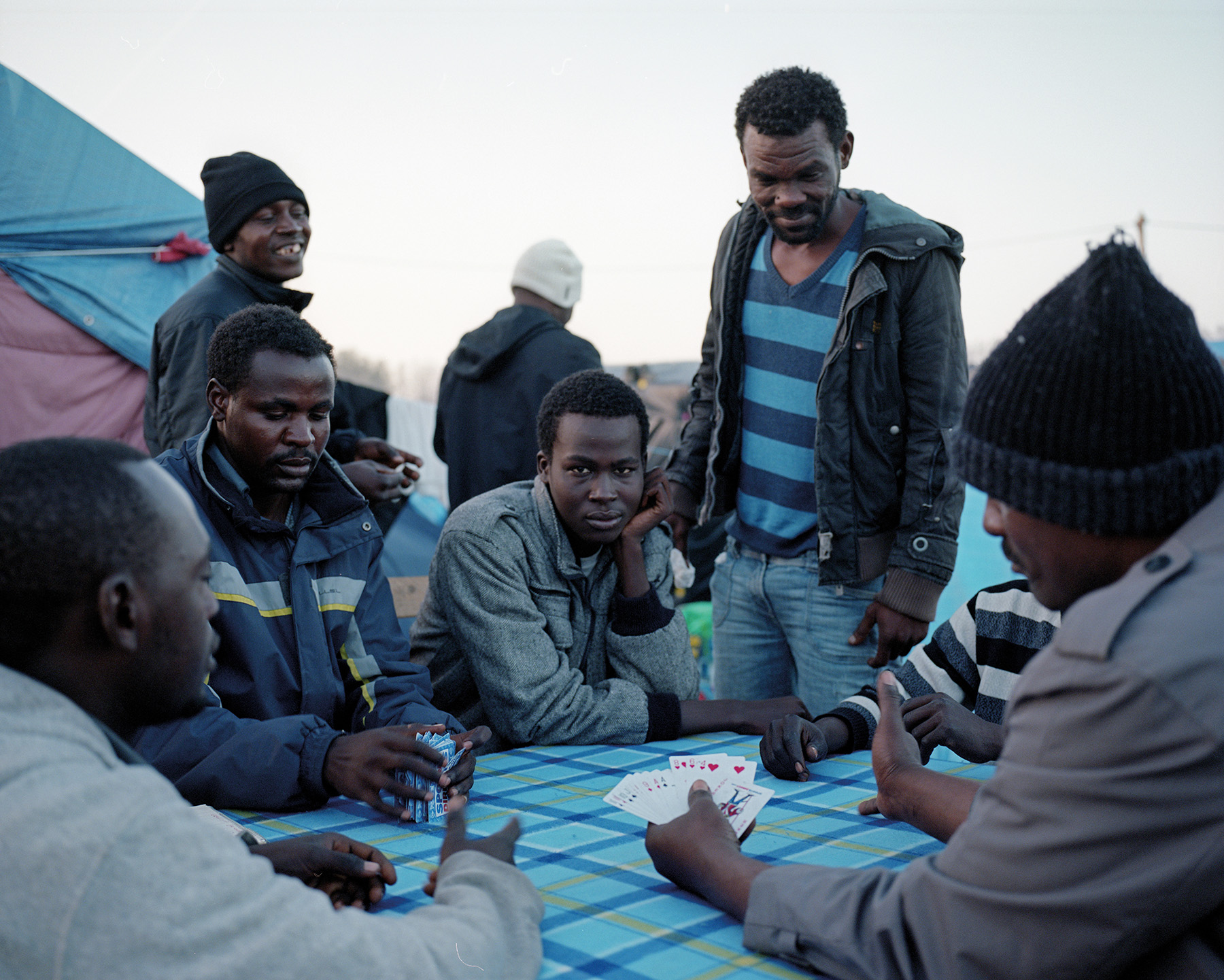 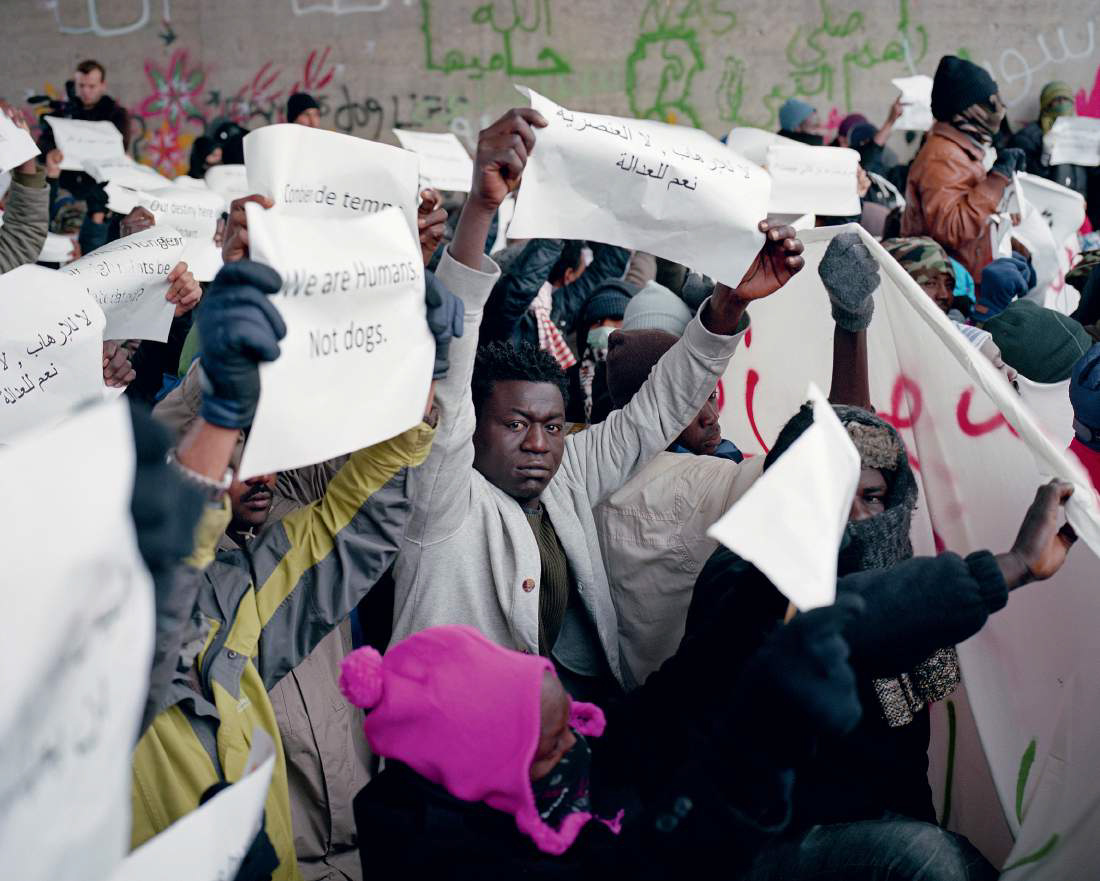 In Calais, they photographed a protest in solidarity with a migrant named Yusuf who had been killed in a hit-and-run on the motorway near the ‘Jungle’ camp. The marchers carried signs and placards that read, ‘We are, humans not dogs’, ‘Europe, do you hear our call from Calais?’ and ‘Yes to justice, no to terrorism.’

“There weren’t many photographers there and that experience underlined the sense of photography being this medium between people in Calais and the rest of the world,” Thomas explains. “You were functioning as a microphone for these people, a way of broadcasting their message, their situation, their opinions. Without the few [photographers] who were there, that march would have been that much easier to ignore.” 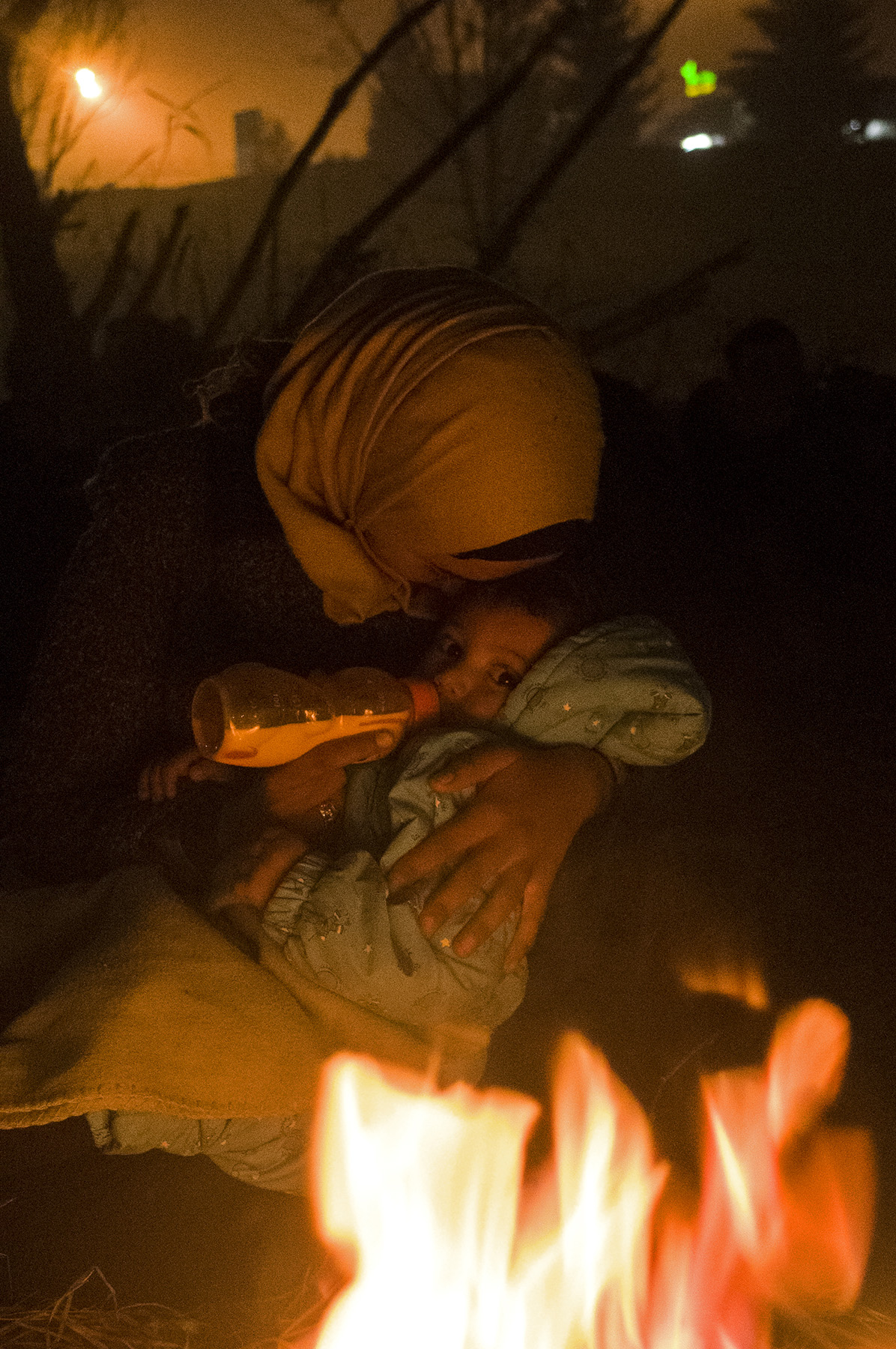 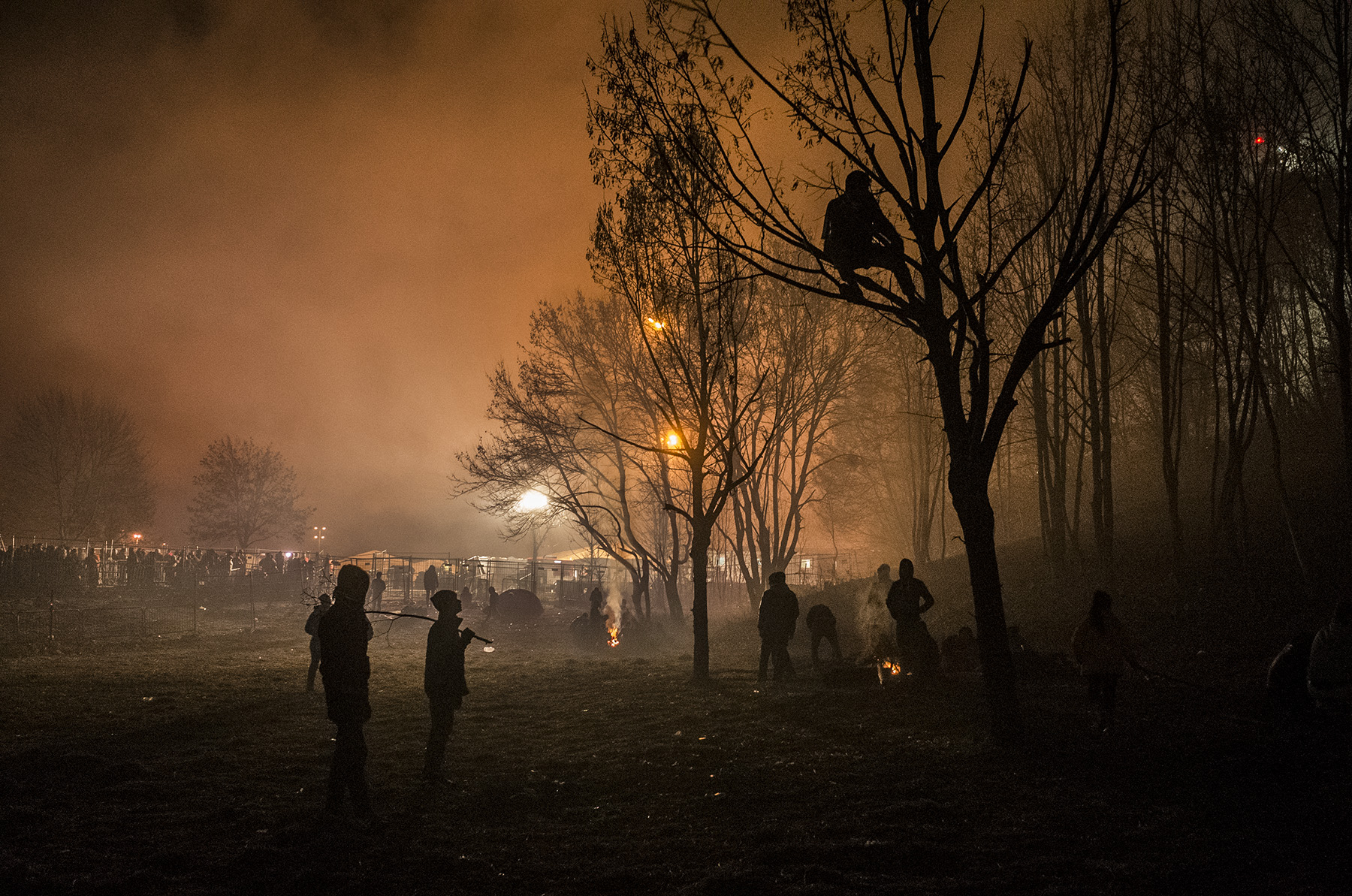 Šentilj, Slovenia, November 2015. After hours of waiting, groups of people move into a nearby field and use tree branches to make fires and keep warm.

Conventional photojournalism-style images appear in the book (shot on digital and presented in black and white, to separate them from the other images shot on film) but it is made up primarily of medium format portraits. This approach builds on Daniel’s previous work, but was an attempt to create something more empowering and dignifying. Working with the bulky film camera required a substantial period of time and preparation, which meant that creating each image was the product of a collaboration with the subject, who brought their own voice. 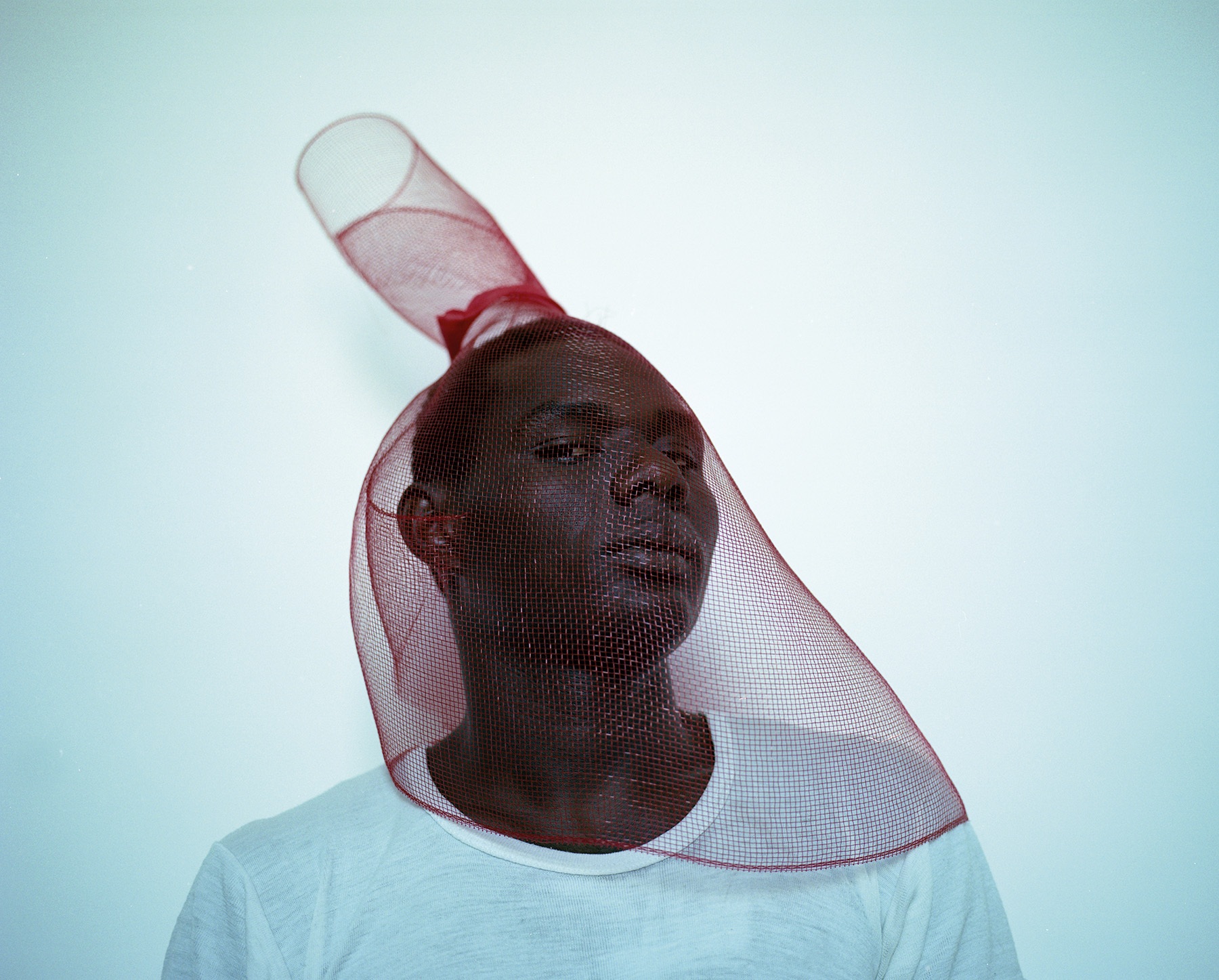 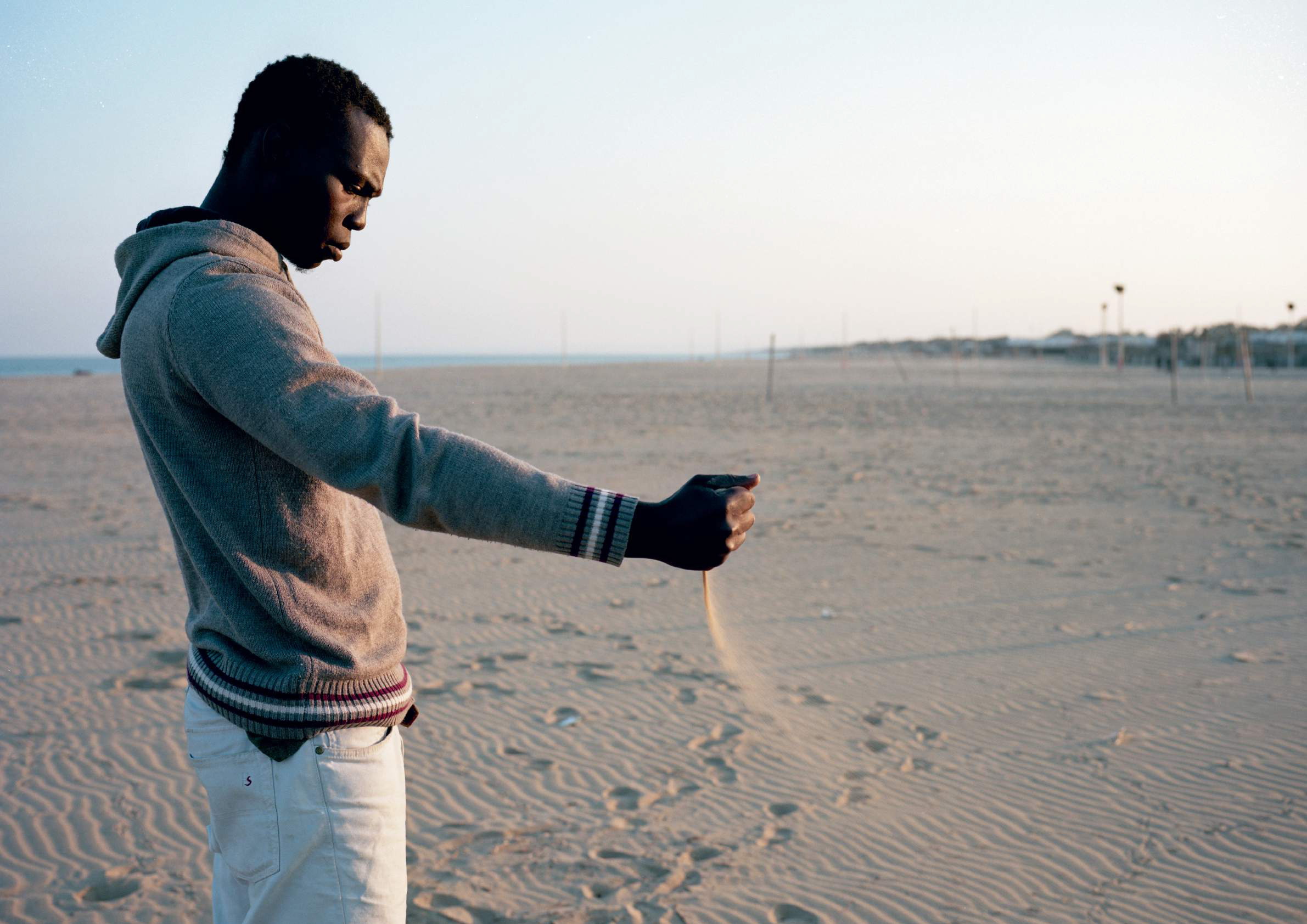 Daniel remembers one image, shot with Aly Gadiaga from Sengal, who the pair met on a number of occasions and developed a strong relationship with. They worked together to represent Aly’s feeling that, at 26 and without seeing his family for six years, time was passing with little hope of a better life in sight. They arrived at the portrait of Aly with sand being blown out of his hands.

“For us, also this project wanted to look at the idea of psychological trauma and creating a platform for people to be able to express what’s actually going on in their minds,” Daniel explains. “It was about finding a way to let them express how it feels to have gone through the traumas that they’ve experienced. Hopefully anyone who understands that image can empathise with it and consider that people are not just facts and figures. Everybody has a story and everybody deserves the opportunity to be heard.” 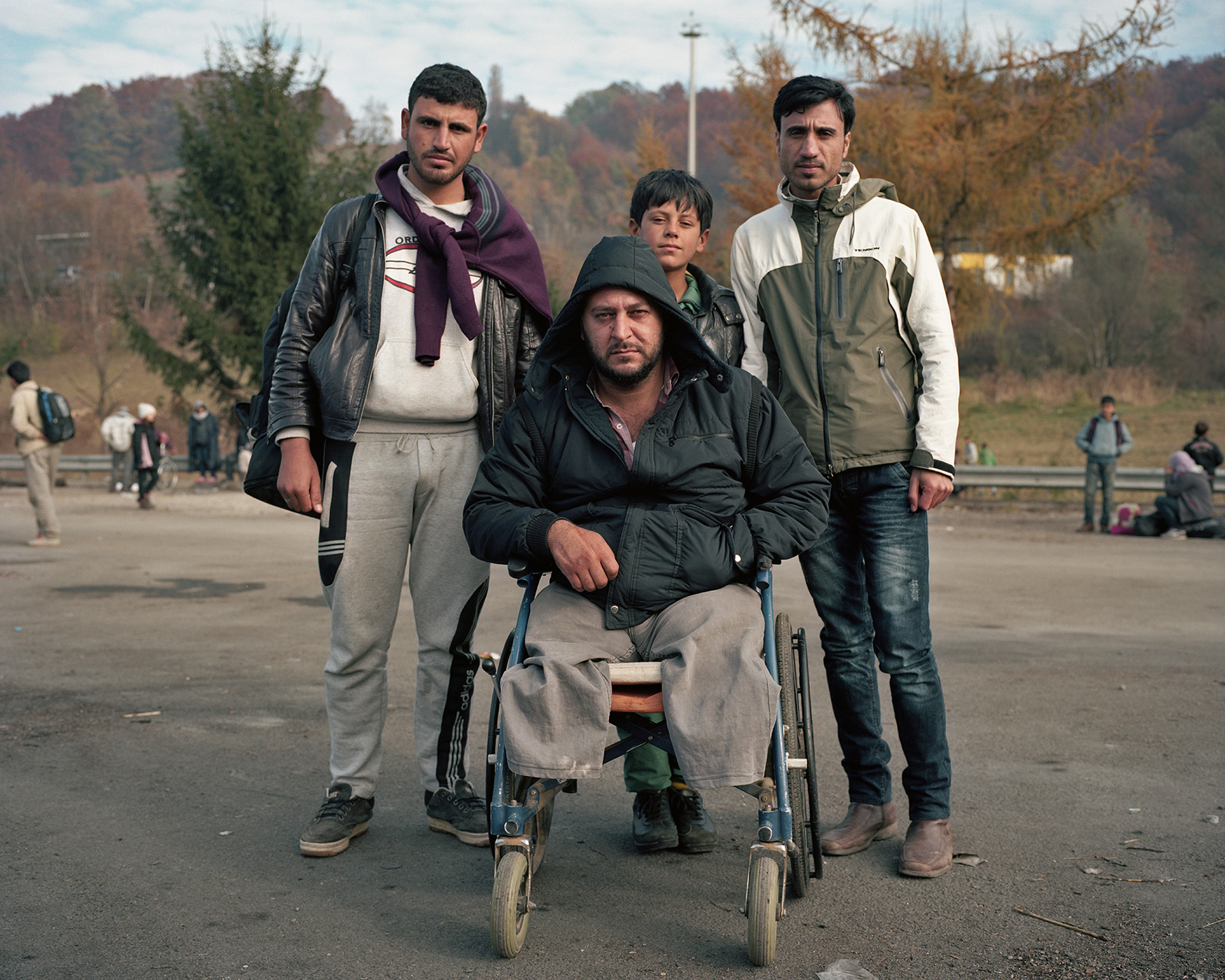 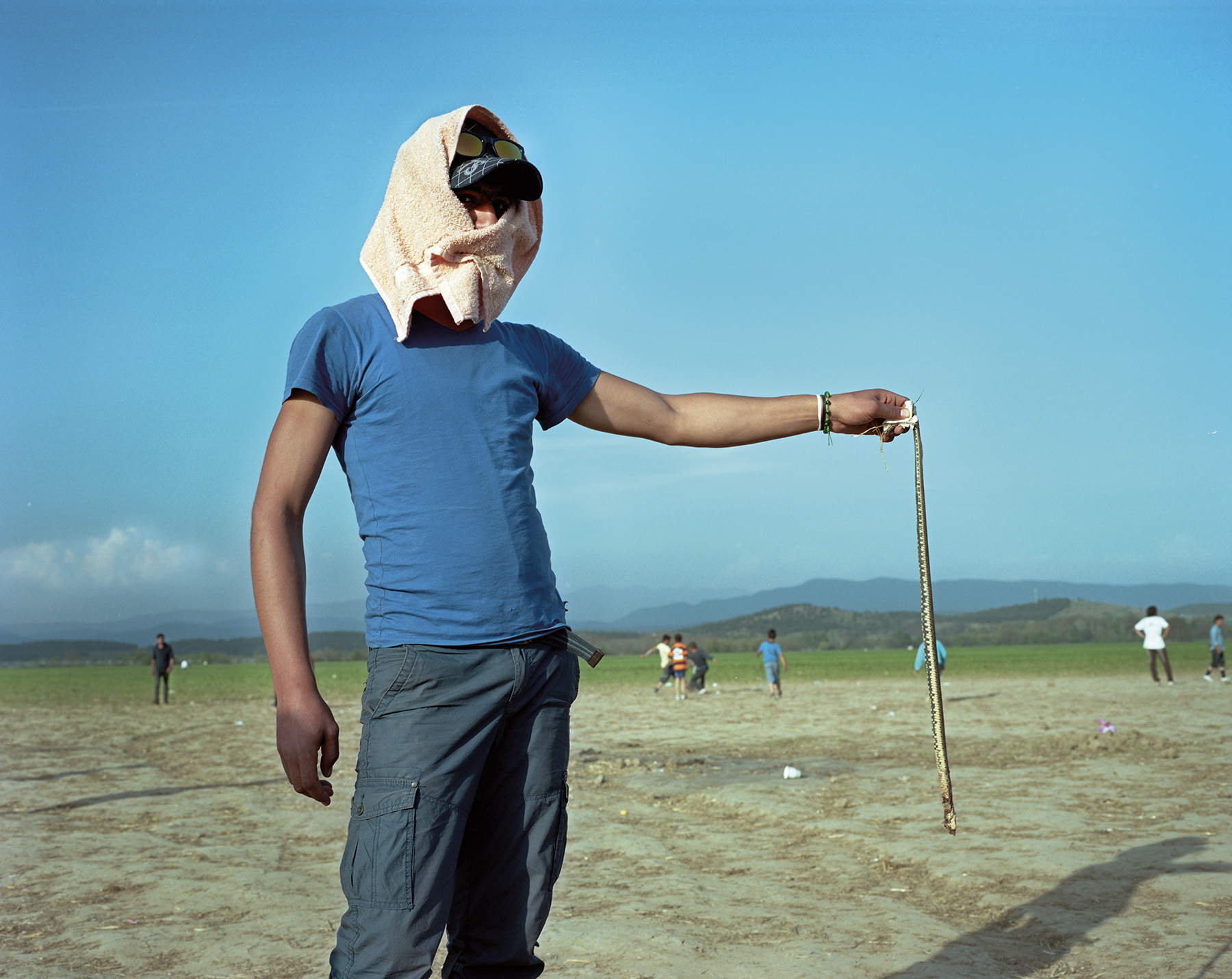 Idomeni, Greece, April 2016. Man holds a snake that he found and killed near a children’s play area. 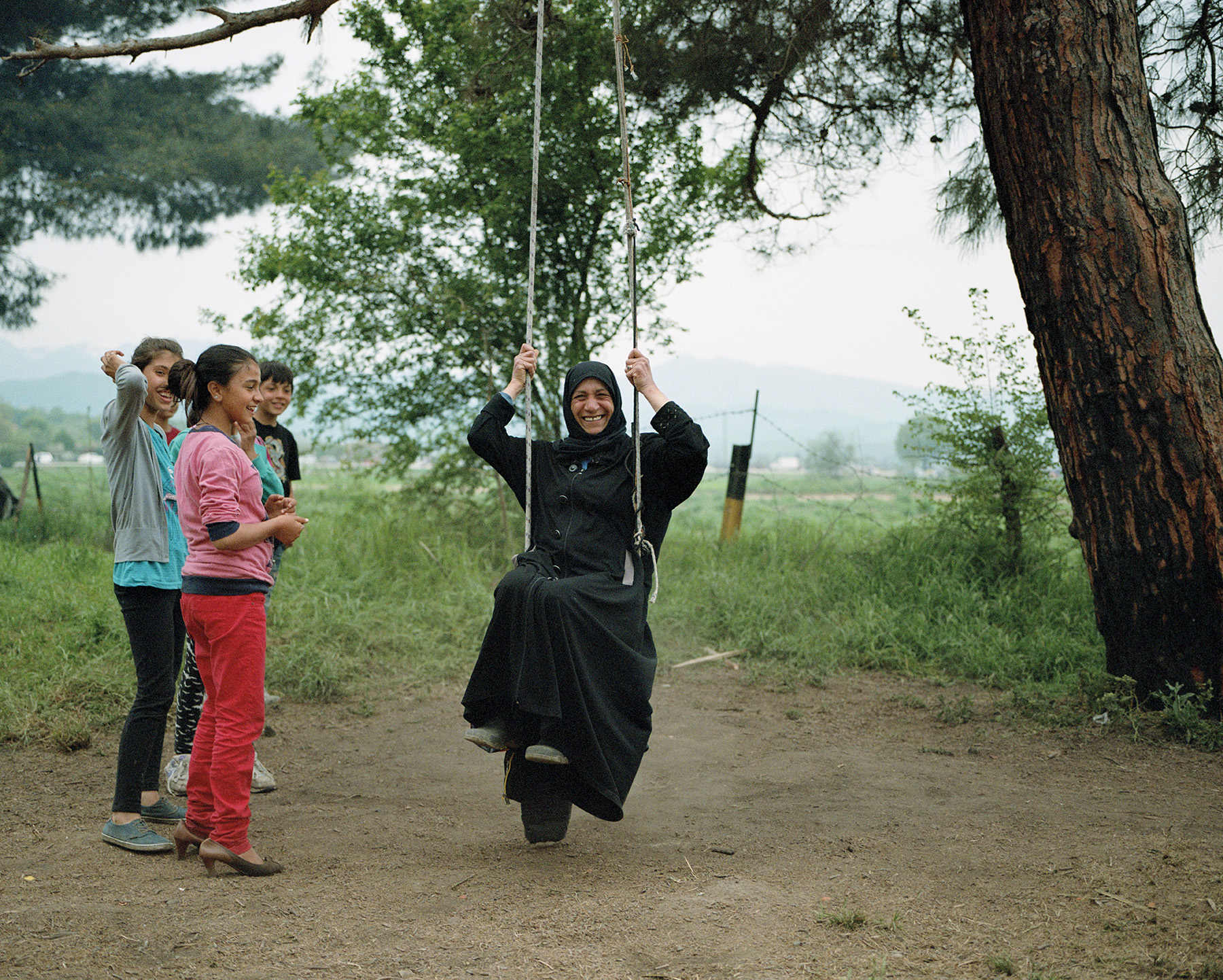 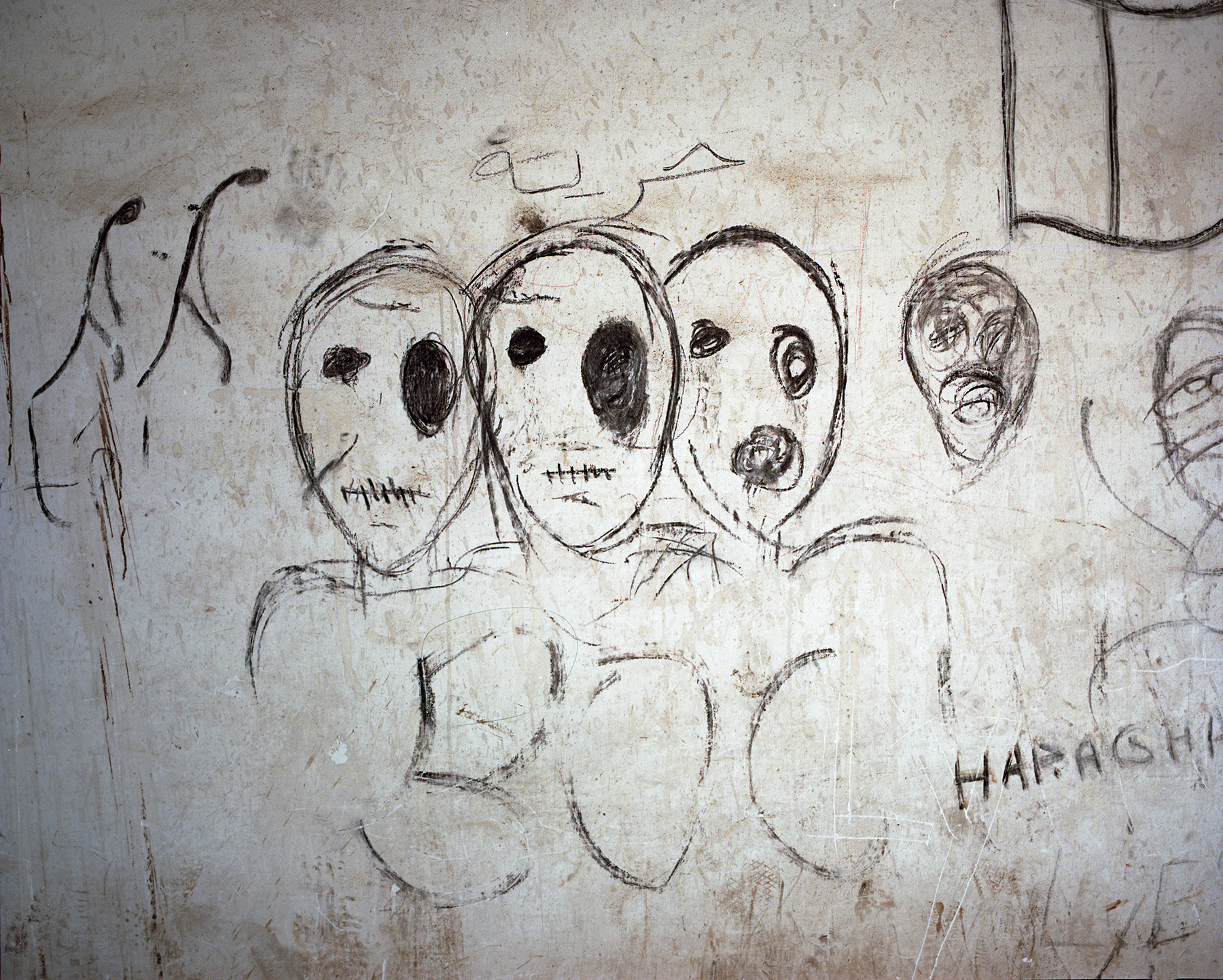 Foreigner: Migration into Europe 2015-2016 from John Radcliffe Studio is published by Mack Books.

Daniel Castro Garcia and Thomas Saxby will be talking about the book and signing copies at The Photographer’s Gallery, London, on Wednesday 13 July, 18.00 – 20.00.

Linkedin
RELATED ARTICLES
OTHER ARTICLES
At his West Bank restaurant, Fadi Kattan established himself as the voice of modern Palestinian cuisine. Now, he’s bringing his innovative, bold flavours to the UK’s capital.
Photographer Becky Tyrell went down to the fading banger and stock raceway to meet a community desperate to keep it alive.
Since 2007, Gideon Mendel has made 20 trips to document floods in 13 countries. The result is an alarming record of what has already been lost to the climate emergency.
Tristan O’Neill’s shots of dancers caught in moments of reverie at the height of rave’s golden age are a testament to the UK’s legendary club culture.
Photographer Sean Maung reflects on documenting a small town in Pennsylvania afflicted by high levels of unemployment, poverty, violence, crime, and addiction.
AI companies that develop image-generators using copyrighted artwork from the internet are coming under fire from artists who say that it amounts to theft.