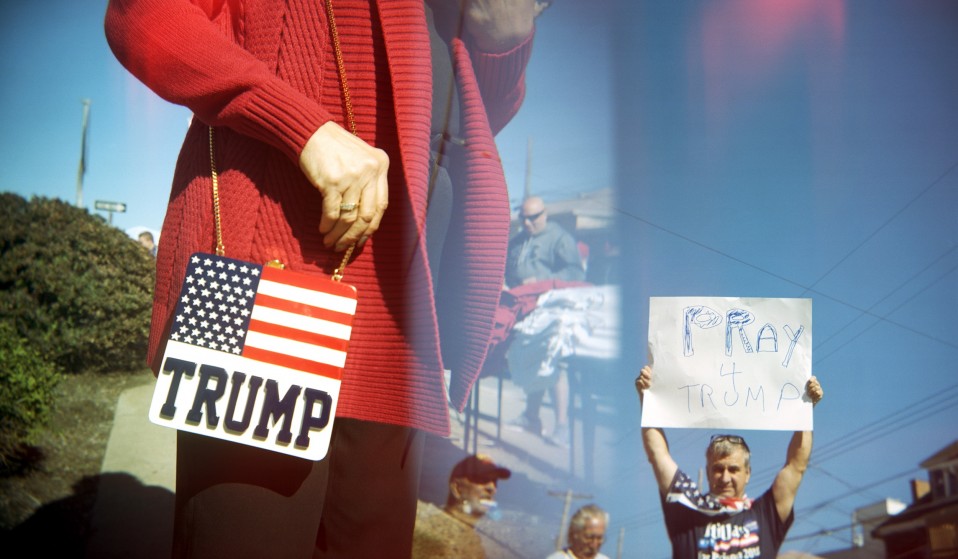 Canadian photographer Sarah Palmer's latest project, Drunk on Trump, captures the hysteria reigning across the United States as the Presidential race comes to a chaotic climax.

Canadian photographer Sarah Palmer's latest project, Drunk on Trump, captures the hysteria reigning across the United States as the Presidential race comes to a chaotic climax.

It’s a crucial time for Donald Trump. While he babbles on about ‘locker room banter’ and grabbing women by the p**sy, the U.S election result date is fast approaching. Despite his dangerous, stomach turning remarks, Trump supporters remain loyal to this shitbag Republican: attending rallies, wearing wacky t-shirts with trump’s face on, chanting ‘make America great again’ whatever the fuck that means.

Whether it’s a bizarre fascination or indignation towards Donald Trump, Canadian photographer Sarah Palmer has become a little bit obsessed with the cult of Trump. Sarah’s technique of using multi-frame shots – where two images are merged together – creates a disjointed picture, what she describes as a drunken effect, capturing from an outsider’s perspective the hysteria sweeping through the nation.

Why did you choose to explore the Trump phenomenon?
It all started out of curiosity and wanting to experience everything I had seen and heard about him and his rallies, firsthand. I also wanted to document it in my style of multi-frame exposures, as it lends well to the feeling of chaos and confusion that surrounds his campaign and events.

What was the message you were trying to put across through this project?
I wanted viewers to feel what it’s like to be at these rallies and the Republican National Convention. There’s often so much to see and hear that you get lost in focusing on one particular thing, so I wanted to merge those visuals together as I experienced them.

Being a Canadian, what is the general consensus on trump in Canada?
I think most of us are collectively incredulous that this is happening there. I find the extremes between conservative and liberal so much more evident in the U.S., so that of course comes out when you have someone as opinionated and right wing as Donald Trump is, running for one of the two major parties there. I think my images show how strange and confusing it is to be at these events, so hopefully it reflects the general consensus because that’s what a lot of the talk around Trump involves here, at least in my social circles, social media and just in the general media I read here.

Did you speak to Trump supporters about their reasoning?
I would wait in line to get into the rallies with everyone else, so I talked to a lot of people.  The general answer I would get is that people were fed up with the way the government is run now, and they believe Trump will make the changes needed. They want jobs back in America, lower taxes, a wall built. Some democrats told me there were now voting for Trump because Hillary is ‘too liberal’ for them.

More drastic supporters told me things like they didn’t want Muslims in the country, one man told me the media lies about everything and that he gets all of his information from infowars.

What is the common theme that all your photographs share?
I try to bring as much emotion as I can to my images, so that the viewer can also try and apply their own experiences and perceptions to them. I want people to feel whats going on, and it not just be a record of an event or time. 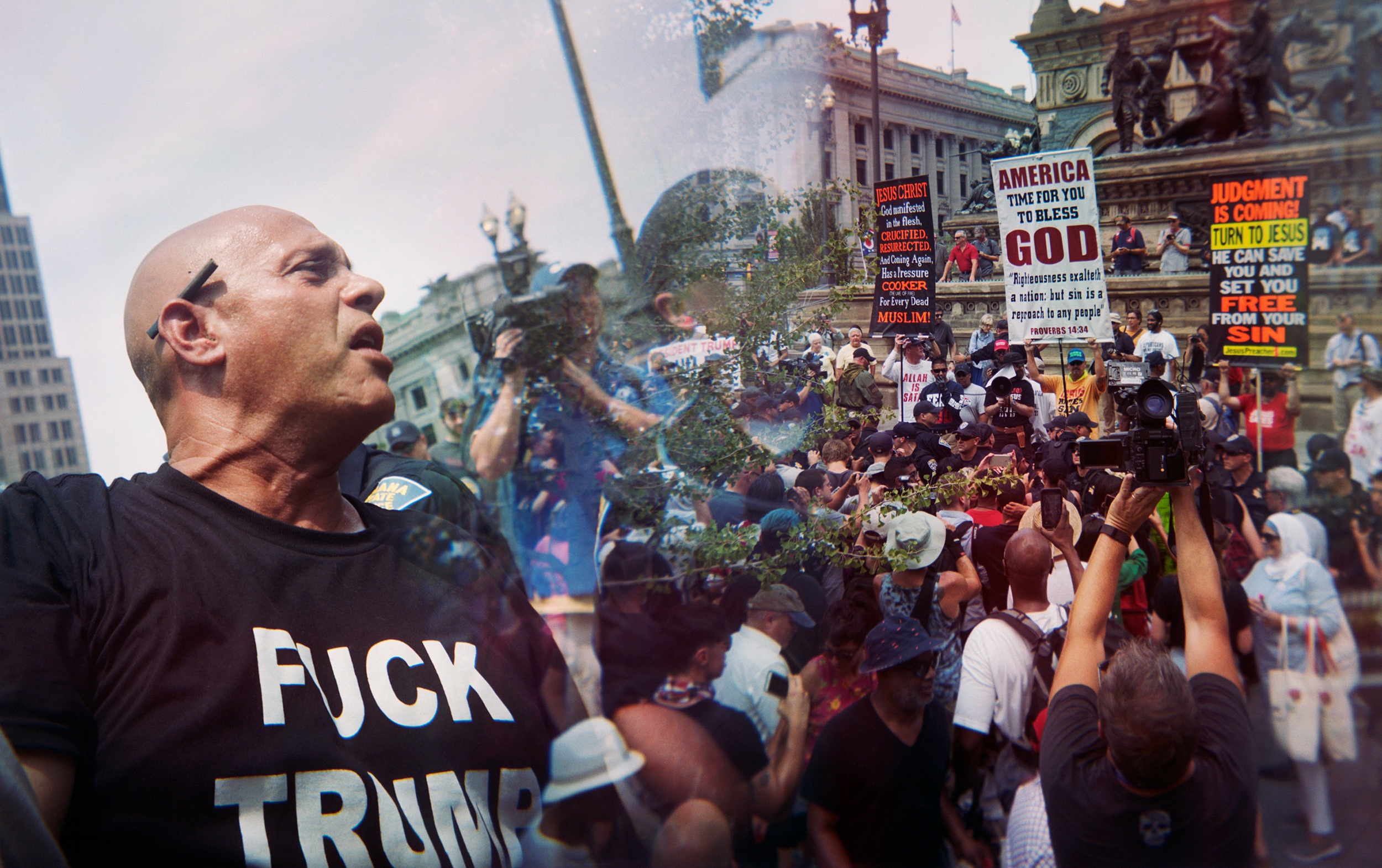 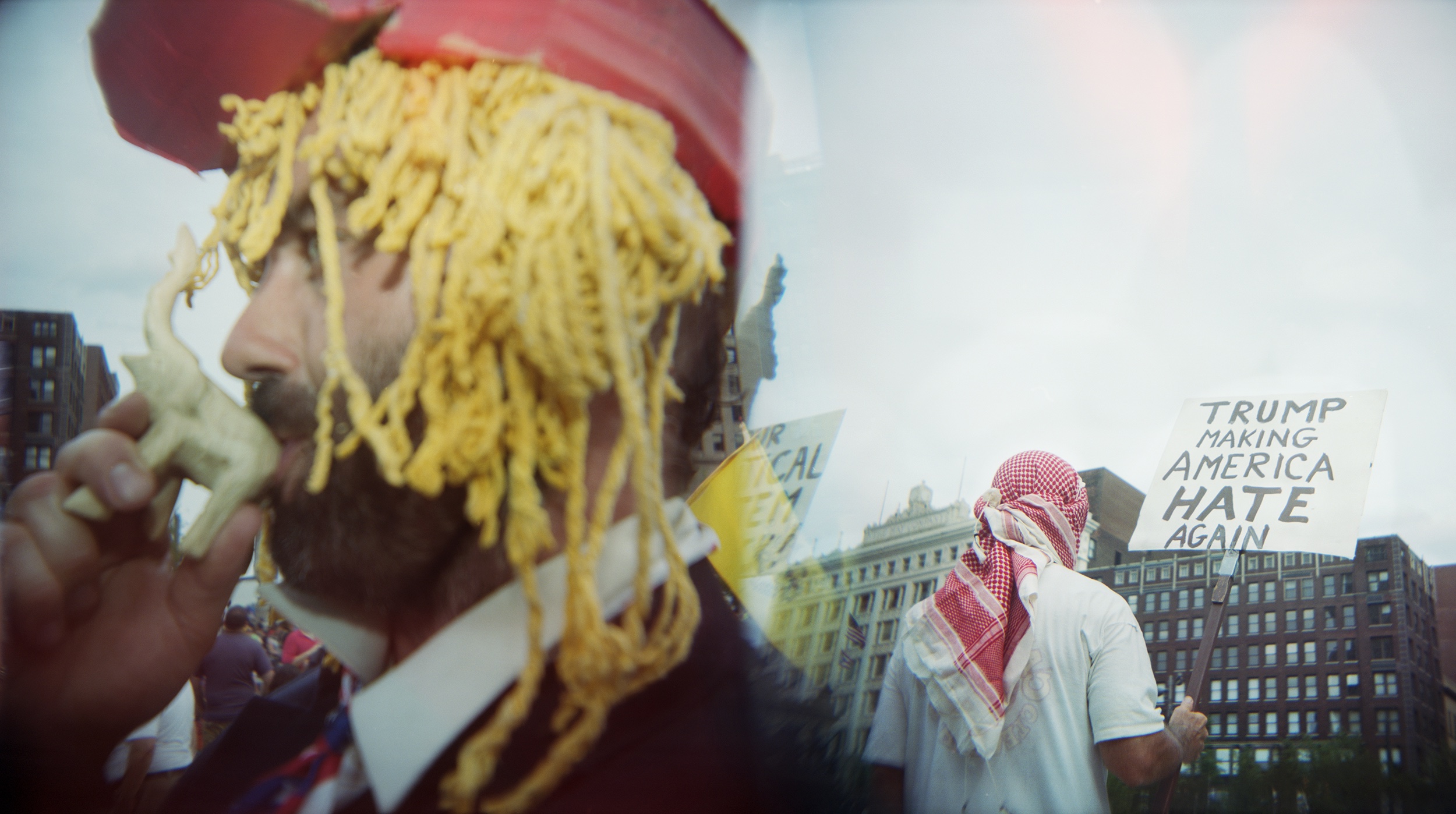 How many rallies did you and how were they different?
I went to three rallies and the Republican National Convention. I went to one that held up to 10,000 people and then another last week that was in a high school gymnasium, holding a few thousand.  The one with 10,000 people was more surreal. It felt like we were at a show, waiting for the star to come on.

It was dark, with dramatic lights, food for sale and loud music.  The recent one I went to felt more real. I was able to focus on the individuals more, hear more conversations, feel more of the intensity. People were just generally angrier and more open about their opinions there. It was the day after the second debate and the audio recording being released a few days earlier, which I think added a lot of tension to the atmosphere there.

You say the Trump rally was like ‘a confusing dream’ what do you mean by this?
There’s just so much to look at and process, so when I would get back from these rallies, it would be difficult to separate my memories and feelings individually, much like when you wake up from a dream. You remember it, but sometimes it’s difficult to tell someone what exactly it was you experienced.

Linkedin
RELATED ARTICLES
OTHER ARTICLES
As the pandemic forces droves more people into hardship, landlords and letting agents are capitalising on our worsening housing emergency.
The musician, DJ and founder of Monika Enterprise reflects on a career defined by revolution and rule-breaking.
Photographer Alice Mann reflects on capturing the camaraderie and discipline it takes to succeed in a highly-competitive sport.
During the pandemic, Made In Hackney launched a meal service that has since proved vital for many, made up of vegan dishes that reflect the borough‘s cultural diversity.
Ahead of the policing bill reaching its final stages in the Lords, protestors came together to rally against the legislation.
In 1984, Martin Shakeshaft set out to document the miner’s strike as it really happened, using his photography as a tool for activism.