Art & Culture / Photography / What American activism looks like in 2016 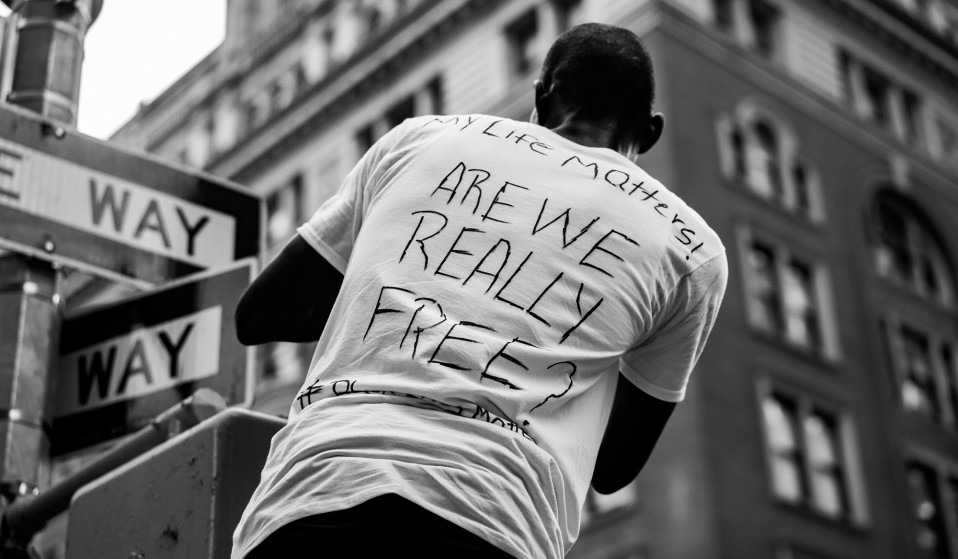 New York based photographer Pete Voelker's passion for activism sees him immortalising some of the most important political movements of the 21st century.

Pete Voelker’s passion for both photography and activism may have started young, but the ignition of social justice movements across the United States in the last few years pulled him into action. Now this New York based photographer is immortalising some of the most important political movements of the 21st century.

If a radical challenging the system with all the passion and drive in the world does so when nobody is around to photograph them, does their action still make a difference?

Well yes, of course it does, but the ability of images to capture activists on the frontline and spread their message can’t be forgotten. Pete Voelker’s photographs of some of the most poignant political and social campaigning in the United States over the last two years shows just how powerful this process can be.

Hailing from an Air Force Base in southern Illinois, Voelker moved to New York City after art college, and it’s here he’s dedicated his life to documenting the revolutions happening around him every day – big or small. 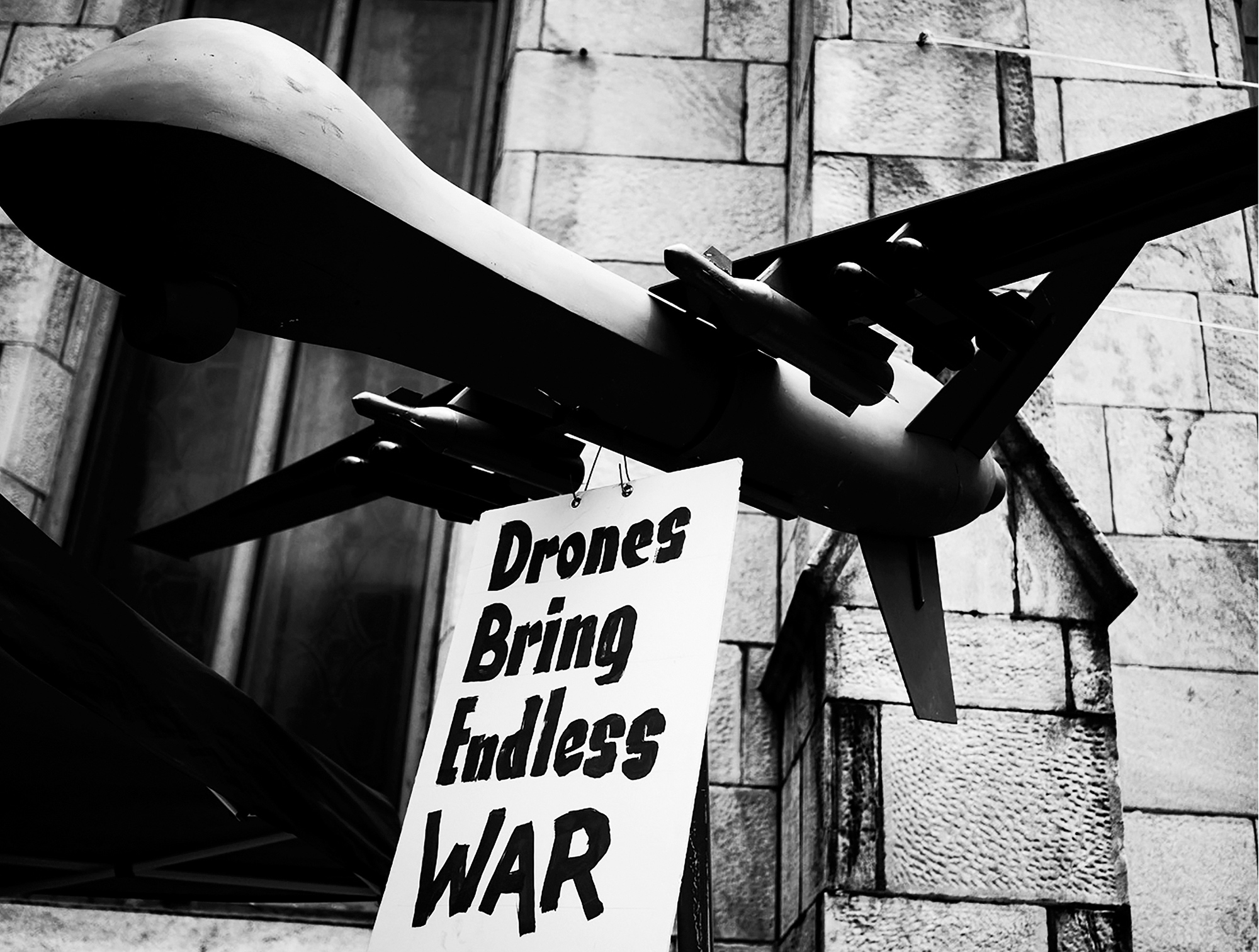 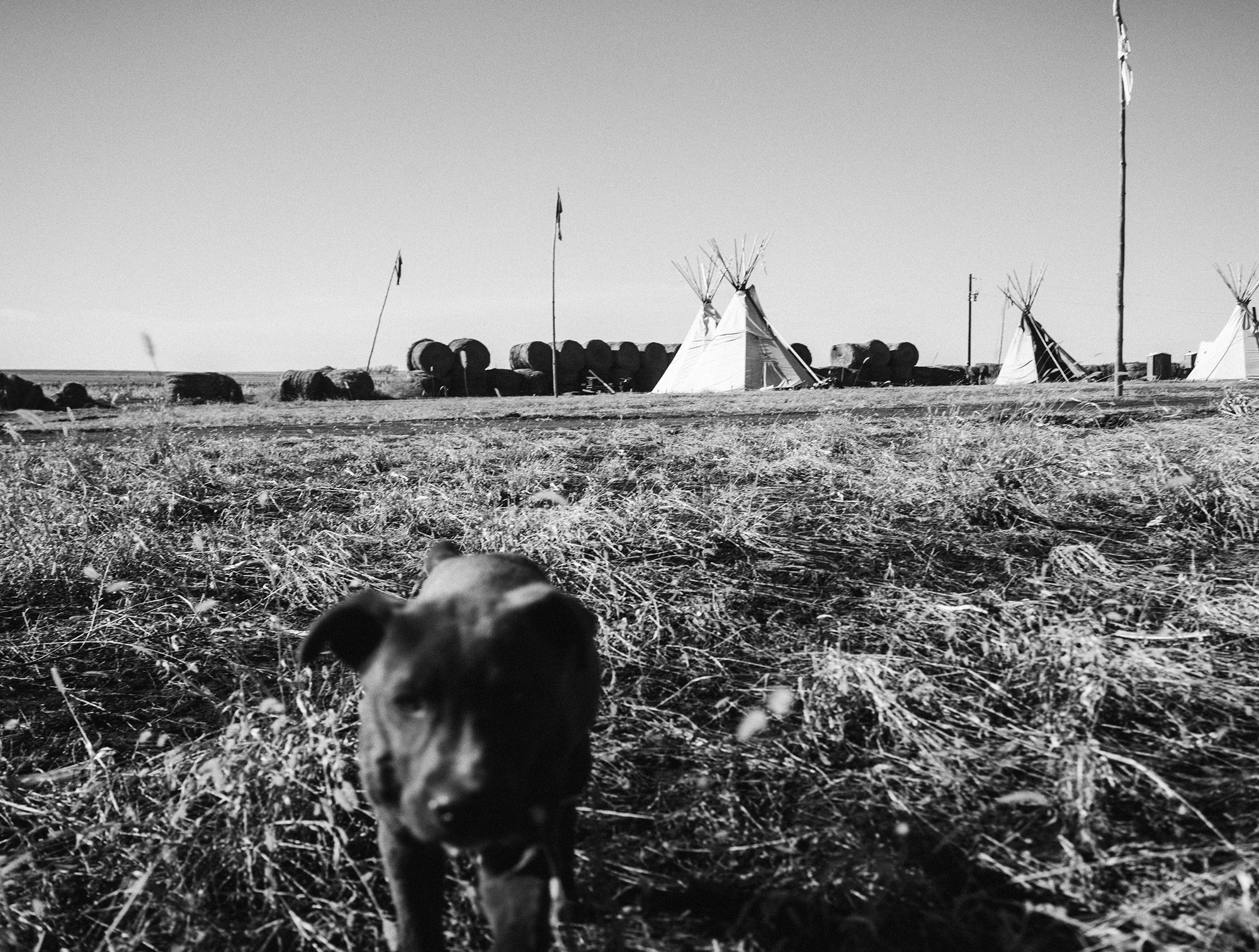 “System Change Not Climate Change” is the second book of his work, set to be exhibited in London this week. “The title of the book is a fairly common phrase seen on signage at demonstrations around the USA,” he says, when I ask him where the name came from. “It’s representative of the need to address systemic problems within the governance of society, as well as our rapidly changing climate.”

That Voelker’s photography spans such a diverse range of causes and communities is what makes this collection so valuable. From Black Lives Matter to the anti-war movement, his pictures transcend colours, class and creeds, highlighting the determination and resilience which resonates with each one of his subjects. 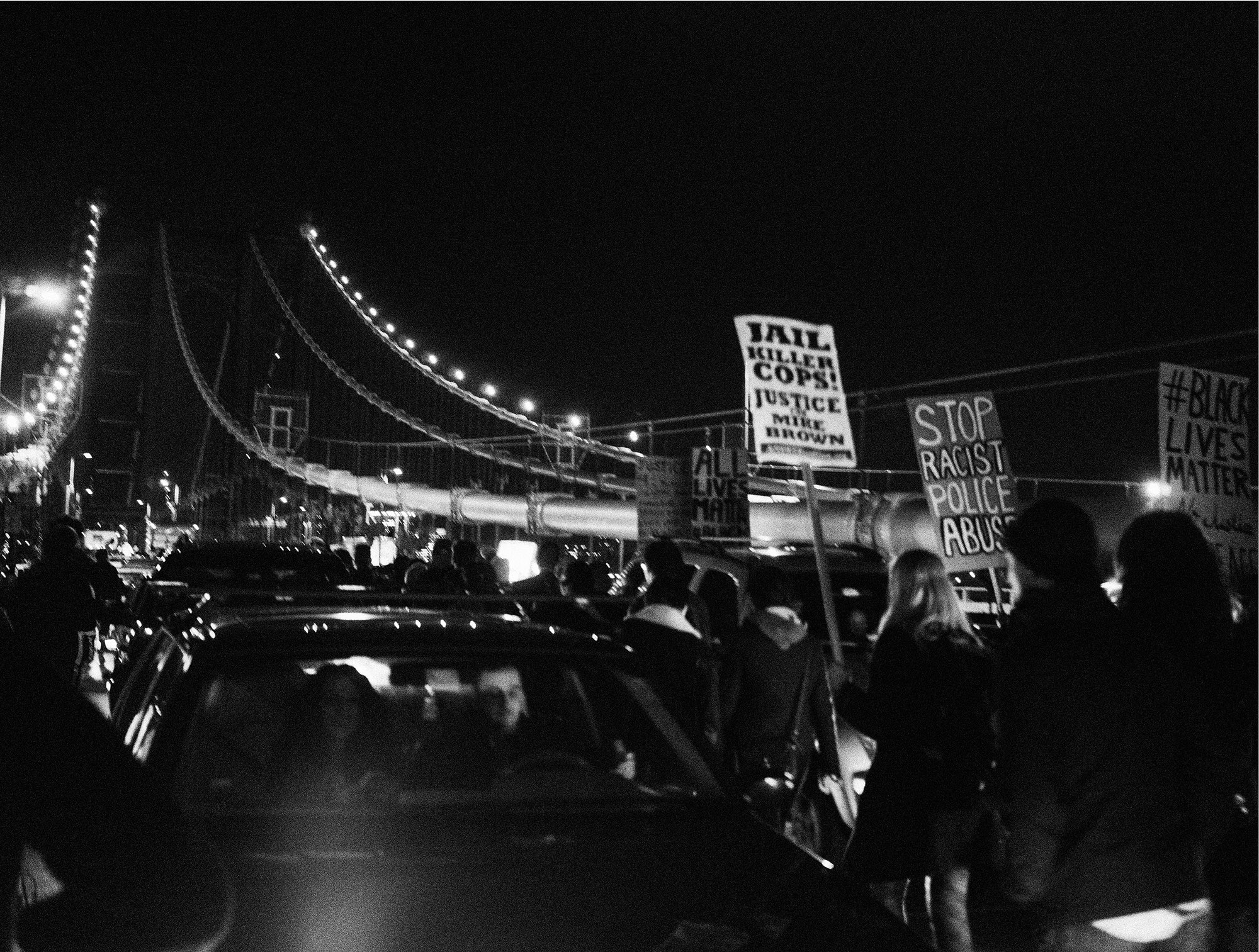 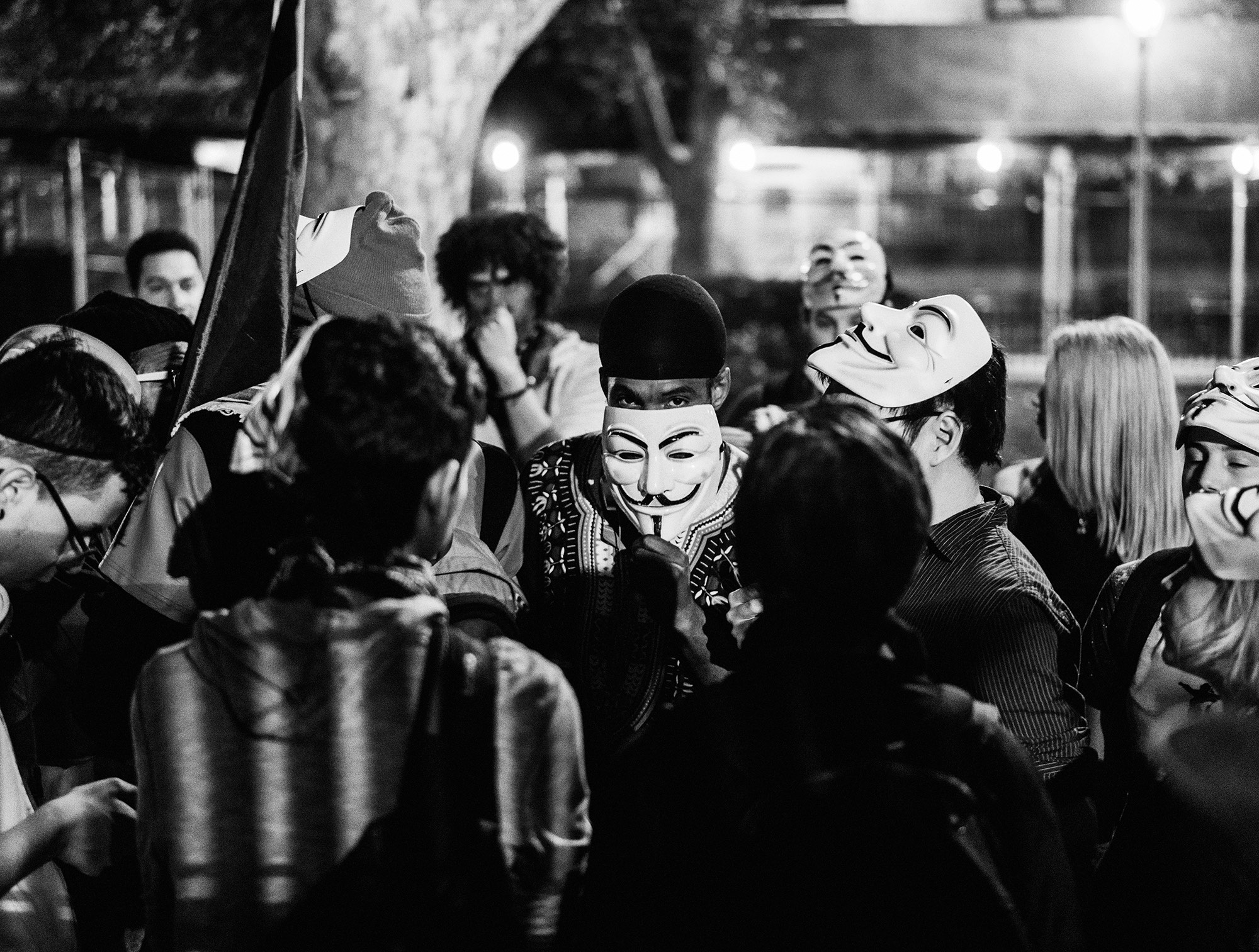 Did your involvement in activism prompt your love of photography, or was it the other way round?
I grew up in a military family and always had an interest in politics and social justice issues. While in high school I attended an anti-IMF World Bank rally in Washington, DC where I was first exposed to zine culture and activism in general. But I think the camera was already in my hand. I took photos and meandered through the crowd learning as I went along.

It wasn’t until 2014 when I decided to focus my photography on protests and social injustice.  The increasing awareness of police brutality and oppression across the United States provoked a sense of urgency for me.  After the murder of Eric Garner I found myself compelled to hit the streets and march through the night with thousands of others.  By the end of the night I had taken a few hundred photos.

What’s the most important demonstration you’ve been a part of?
No matter which side of the aisle the cause falls on, the raw emotion and dedication from demonstrators is unbelievably powerful and moving.  I’ve shed so many tears listening to the stories of families affected by police violence, but a small rally held in the shadow of the UN building on Roosevelt Island, NYC, still resonates deeply. It was the 3 year anniversary of the Syrian Civil War, in fact it was a vigil more than a demonstration and it correlated with similar events around the world. I didn’t take many photographs because the gut wrenching experiences people were sharing overwhelmed me. 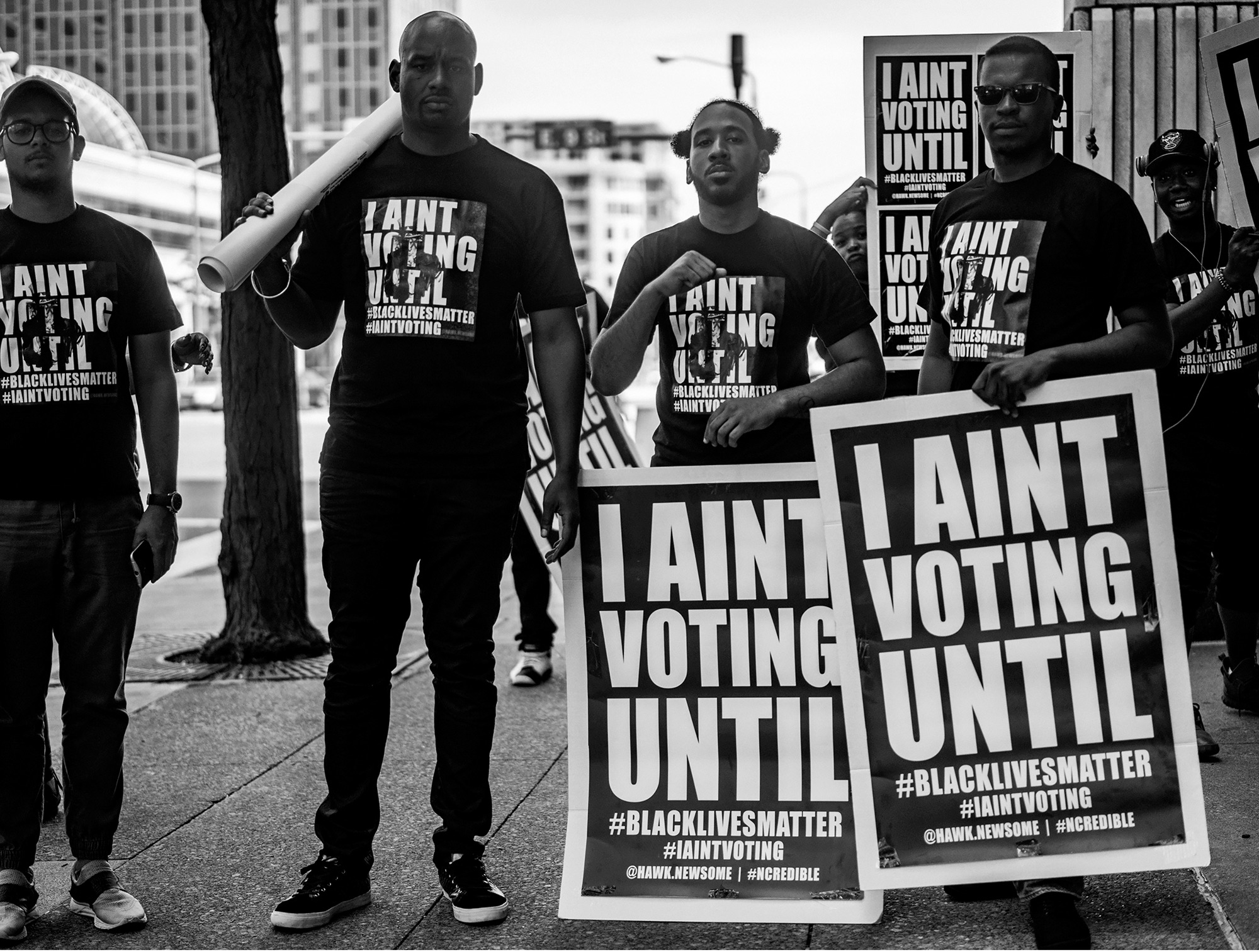 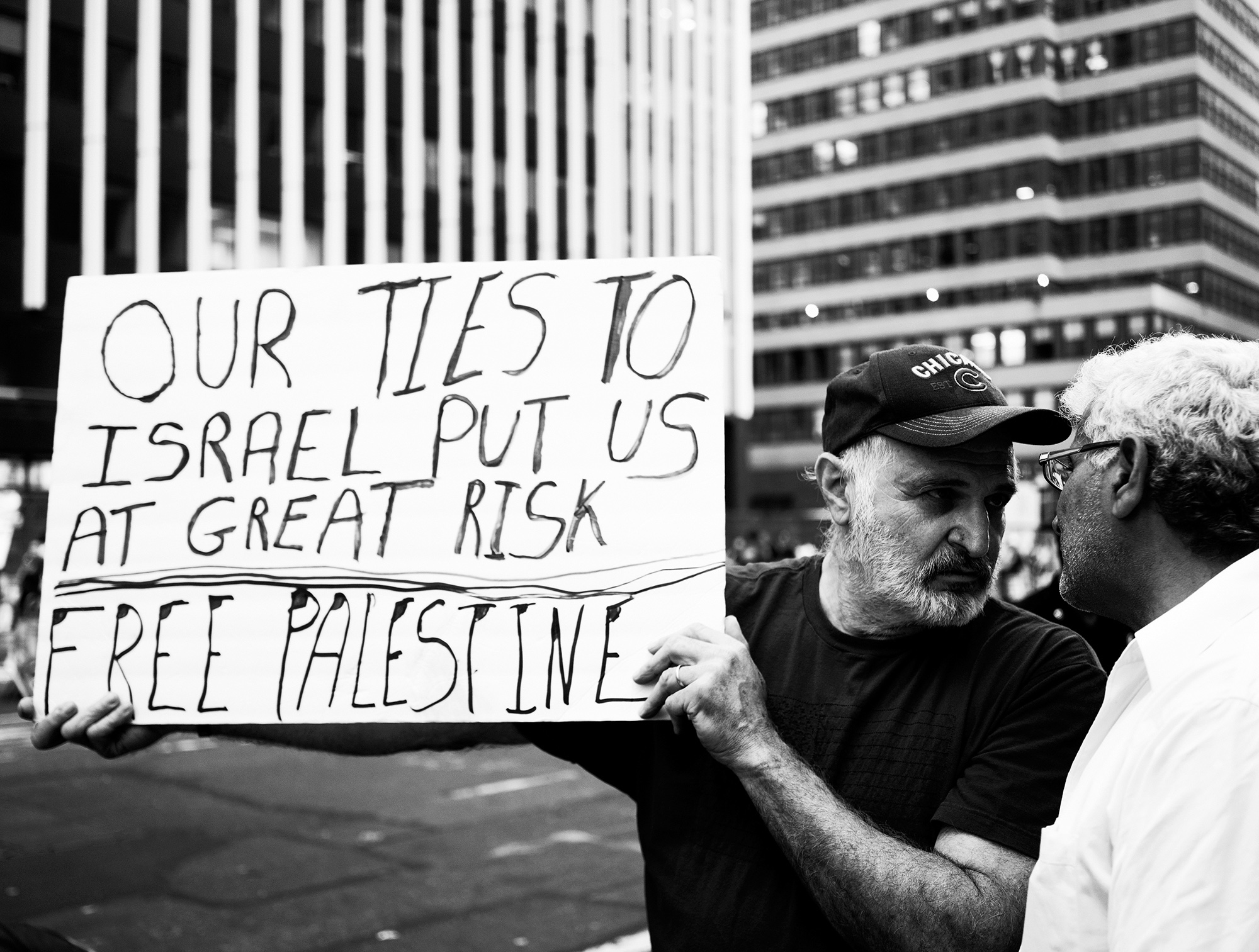 Did you come up against any opposition to your work? Were you ever in physical danger documenting demonstrations?
I’ve had a few violent experiences while covering demonstrations, but there are two that stand out for me. The Freddie Gray march [through New York City] was not permitted, and after months of marches around the city for other police brutality instances the NYPD was not accommodating to the protest.

Within a few hundred meters after leaving Union Square, officers halted the march, first there was a burst of pepper spray and then they began grabbing and detaining demonstrators. Told to get to the sidewalk I was given a quick reprieve from the corralling at the front of the march but before I could make it to safety a woman being slammed against a car distracted me. While documenting her experience I was thrown to the ground by three officers at once. This landed me in jail for the night with 150+ others and a court appearance a month later.

The flag burning [in Brooklyn, 2015] was a bit different. Possibly one of the most provocative forms of protest, it prompted a counter protest which far outnumbered the flag burners. A motorcycle club/gang showed up to try and prevent the burning of the flag.

One demonstrator was pushed to the ground and punched as they threatened the lives of others and literally chased the demonstrators out of Fort Greene Park. Breaking my neutrality, I urged people to calm down and one of the MC members spat in my face. These guys were very intimidating and seemingly untouchable; there were no repercussions for them for violence they created. 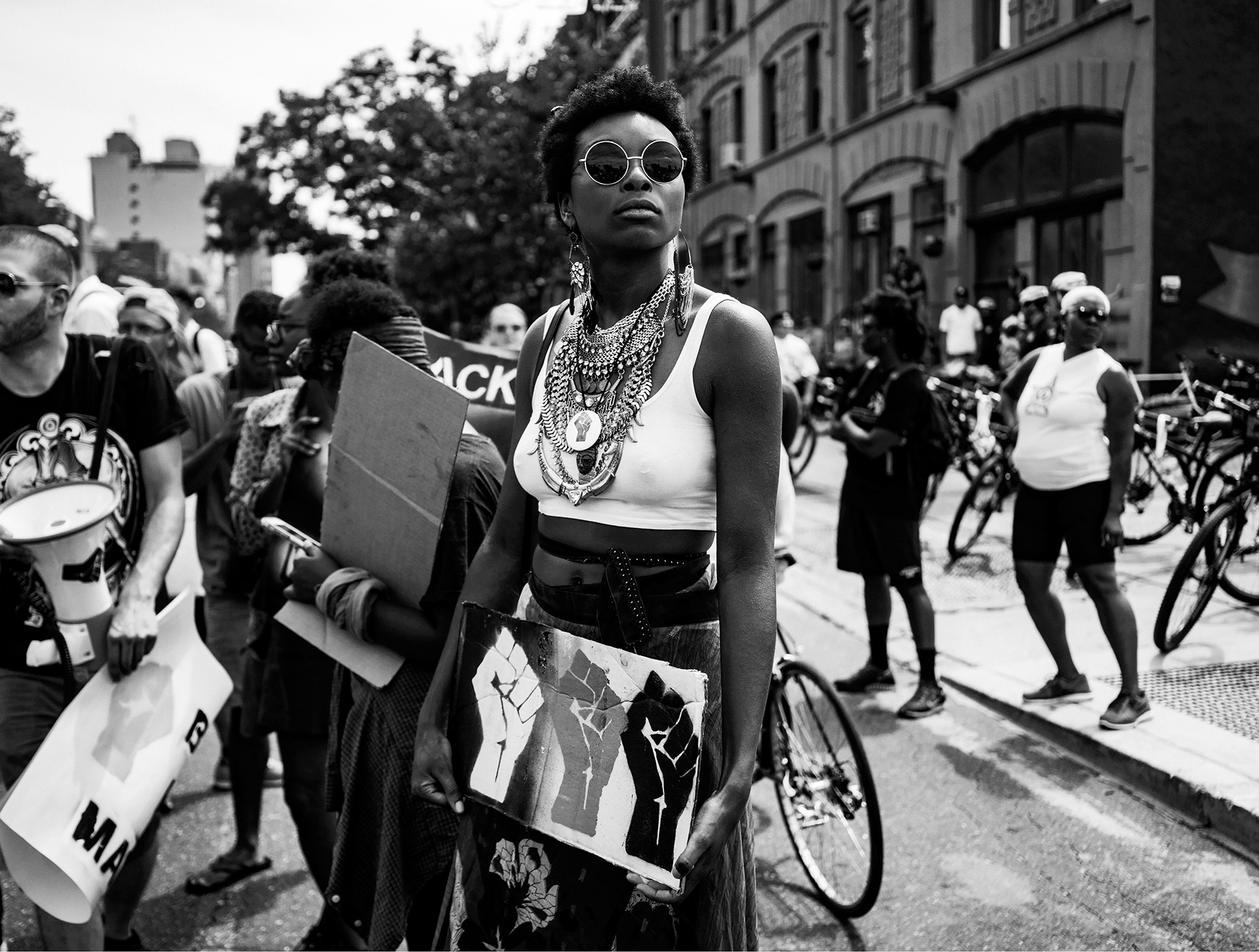 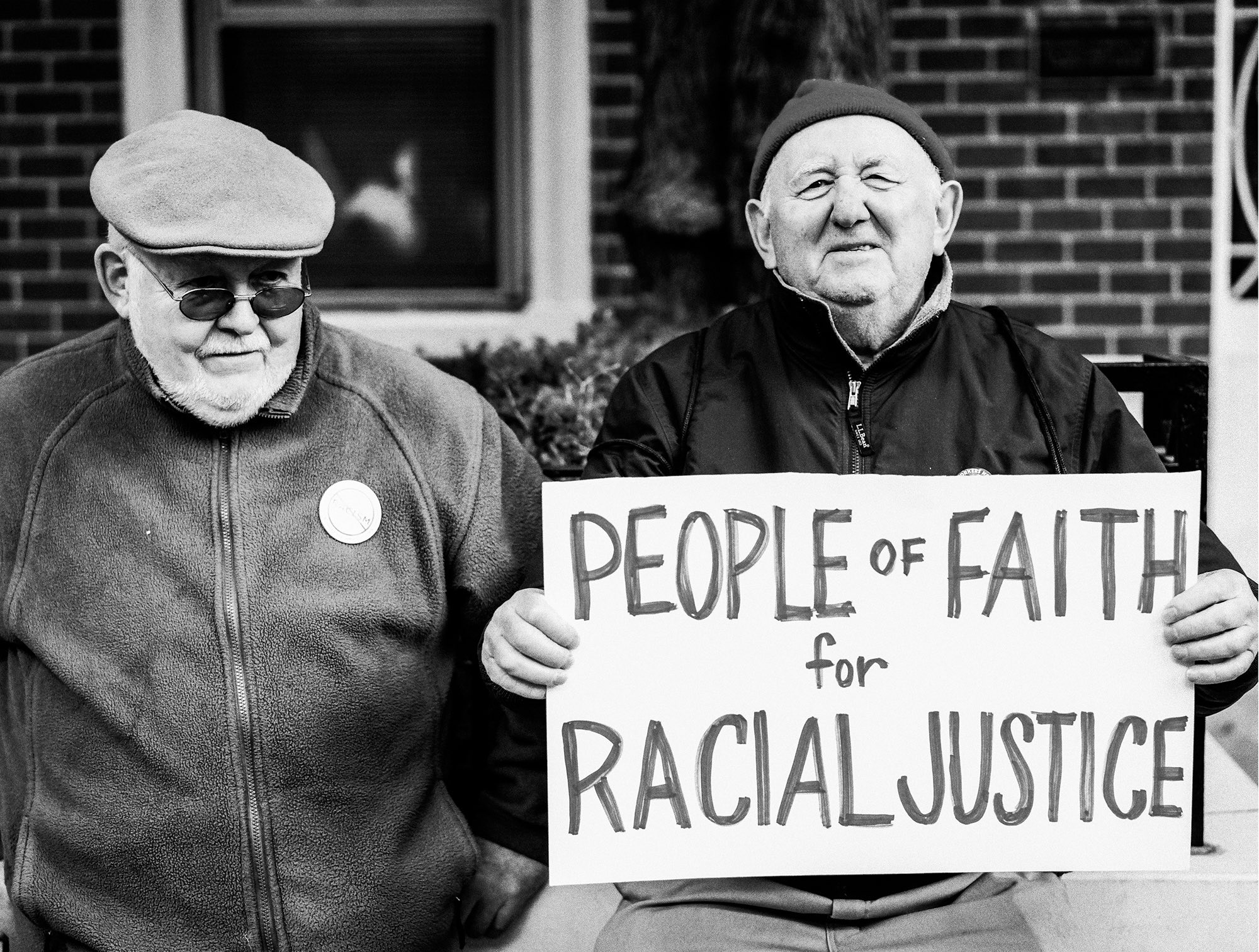 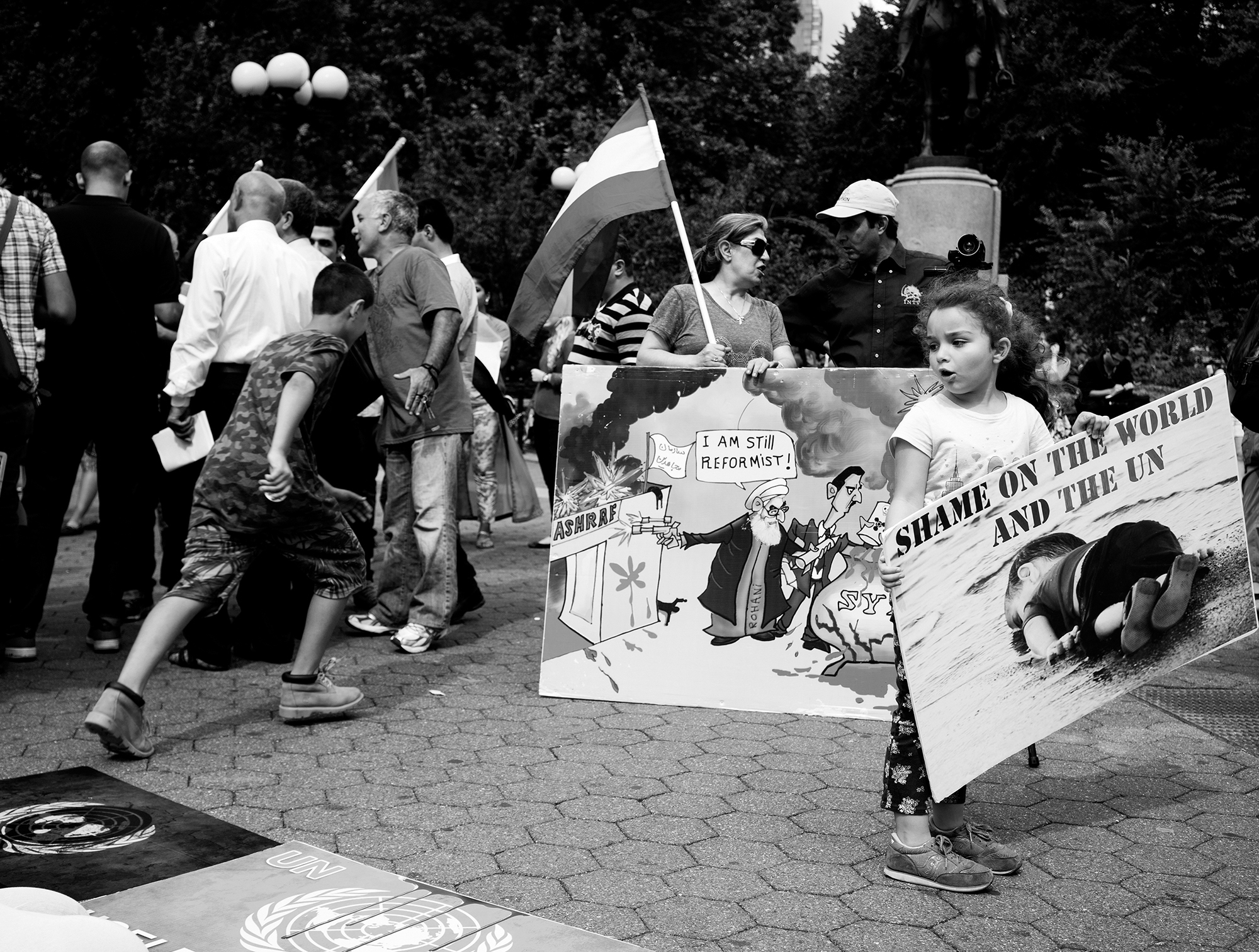 Why is it time for another book of your work?
I decided to create this edit of imagery because of how important these issues are and because 2016 is a massive election year. I believe that even if only a few people see my book and images, its important to help spur as much discussion as possible.

Linkedin
RELATED ARTICLES
OTHER ARTICLES
Photographer Becky Tyrell went down to the fading banger and stock raceway to meet a community desperate to keep it alive.
David 'Dee' Delgado’s photo project is about honouring and uplifting the city of his youth, and a world rapidly disappearing under the relentless onslaught of gentrification.
A new podcast is opening up the conversation between trans women and trans amorous men in the hope of building coalitions.
A new law change is enabling Britain’s donor-conceived children to know the truth about their origins – but campaigners say the fertility industry must do more to protect people.
A recent High Court ruling against the right to wild camp in Dartmoor National Park sparked the largest land protest in history – and campaigners say their fight is not over yet.
Theo McInnes’s photos of the annual event provide an intriguing snapshot of contemporary Britain.