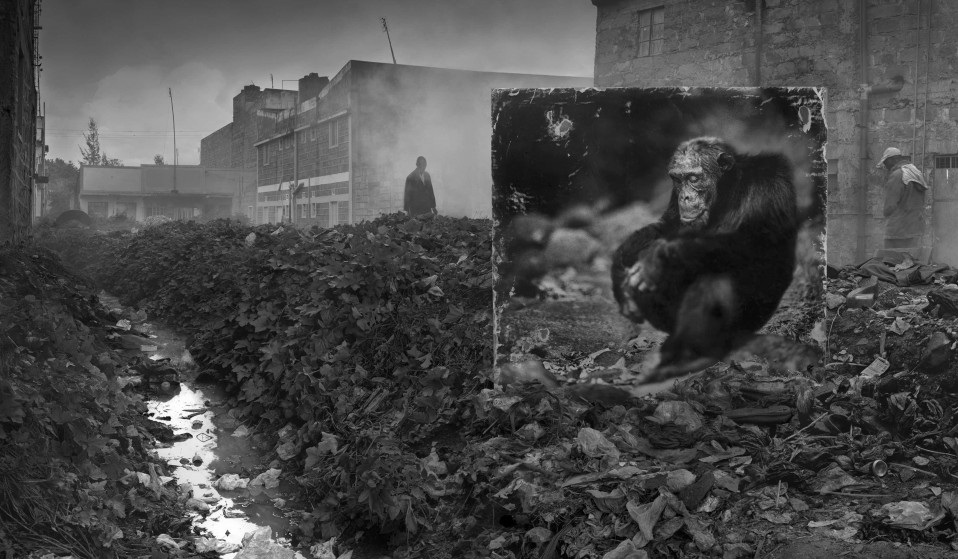 Photographing wildlife is a bittersweet career. Since 2001, fine art photographer Nick Brandt has been documenting the natural world and animals of East Africa – while seeing them disappear before his eyes. During the course of his career, he’s watched countless species driven from their homes and had their habitats destroyed.

His African trilogy, completed three years ago, On This Earth, A Shadow Falls, Across the Ravaged Land, ended with a somber conclusion: the process of devastation across the continent continues to escalate.

Brandt’s latest project, Inherit The Dust takes wild animals back to the landscapes where they used to roam free. But this is no triumphant return, animals from his own wildlife photographs are printed on panels and left to compete with – or be ignored by – the garbage pickers, street children and concrete infrastructure, that have taken their place. The once mighty beasts of the wild are reduced to ghosts in the urban landscape.

Huck spoke to Nick about using photography to provoke change and his experiences documenting disappearance.

What drew you to documenting animals and led you to East Africa?
Spending time in East Africa, in the wilds, I realised that photography was the way to express my lifelong feelings about animals and the endangered natural world, in a way that I thought had not been done before. Animals and nature were my first love, not photography. Photography was merely the best medium for me to express my feelings about the disappearing natural world.

Actually, it’s much more complex and monumental than that. Mainly, it’s about all of us. The terrifying number of us, and the impact of the very finite amount of space and resources for so many humans.

Could you share a story behind creating one of your images?
It drives me crazy when people think that the panels were just dropped in in Photoshop. So I’d like to mention one photo in particular, because for me, it confirms the superiority of real life, compared to Photoshop.

In ‘Underpass With Elephants’, 2015 (Lean Back, Your Life is On Track), I wanted just one person, probably a child, to see the animals in the panel, while all around, nobody else did. But I never imagined that this tiny boy on the right, a child of one of the many homeless people sleeping out on the land beneath this underpass, would wander into frame, fascinated by these giant elephants, and touch them with what appears to be a stick in his hand.

I never imagined the cruelly juxtaposed billboard beyond, featuring a well-to-do middle class African man leaning back in his garden chair, with the tag line beneath: Lean Back, Your Life is On Track. I never imagined that the elephants would look so trapped between the two gargantuan concrete pillars, the matriarch appearing to be looking almost sympathetically at the humans also rendered homeless. I never imagined that her trunk would appear to be practically resting on the ground in front of the panel, not confined to the panel itself.

I never imagined all the homeless children sniffing glue. It’s hard to see clearly on a computer screen, but all those kids, some as young as 6 or 7 years old, were high on glue from the bottles hanging from their faces.

‘Making of Inherit the Dust’

‘Road To Factory With Zebra’

How effective do you feel art projects like this can be in making change?
Good question. Honestly, I really don’t know how effective they can be. But one has to try and at least hope to be an incremental cog in the wheel of change, part of a cumulative awareness and outcry that eventually filters its way through to government and industry, where policy changes can be made to improve the planet in a meaningful way.

Nick Brandt’s Inherit The Dust is out now, published by Edwynn Houk Editions.

Inherit the Dust will be presented at PhotoLondon Art Fair at Somerset House, 19-22 May, by Atlas Gallery.

Linkedin
RELATED ARTICLES
OTHER ARTICLES
A series of photos by the late Jerry Dantzic taken in 1957 show a tender side to the iconic Jazz musician.
Steel City is often overlooked when it comes to the country's cultural radar despite its role in shaping electronic music.
The government’s brutal crackdown on NGOs has left victims of rape without anywhere to seek help. And now, as the country plays a key role is Russia’s war, things are only getting worse.
With the virus now a global health emergency, we must take steps to fight misinformation and demand a swift UK-wide vaccine roll out, writes Phil Samba.
Yesterday, rail workers came together to protest poor pay, working conditions and job cuts in their latest round of strikes.
Last week, Tower Hamlets council removed its nudity-restricting licensing conditions in a huge win for London’s kink community.