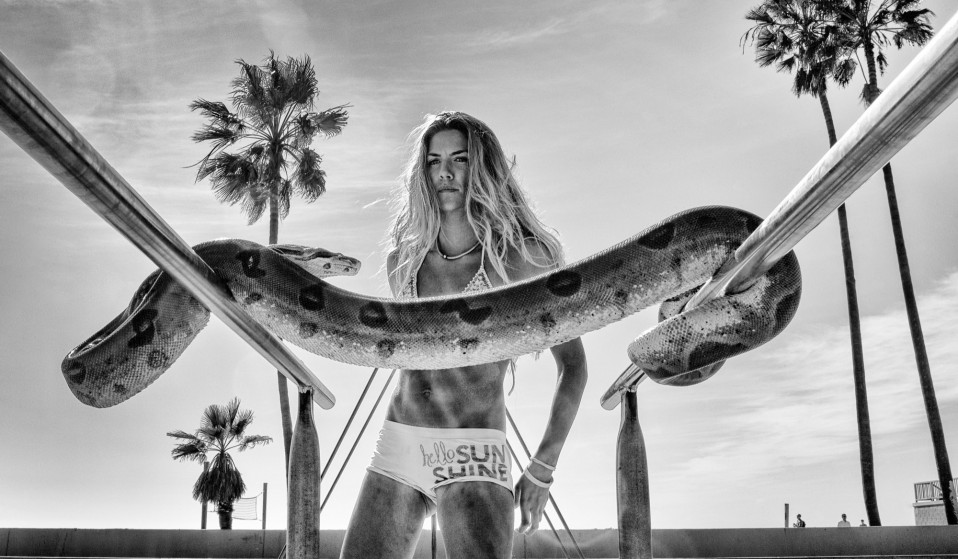 When Dotan Saguy made the leap from business developer to street photographer, he immersed himself in California's world-famous tourist attraction: a real-life circus on the verge of being gentrified.

When Dotan Saguy made the leap from business developer to street photographer, he immersed himself in California's world-famous tourist attraction: a real-life circus on the verge of being gentrified.

A few years ago, Dotan Saguy tied to hone his street photography skills by spreading out across Los Angeles, always asking himself, ‘Where should I shoot today?’

More of than not, he’d end up in Venice Beach. “It’s a bit ironic because Venice is in many ways the antithesis of LA but it’s the place I empathise with most,” he says. “I love its diversity, its anti-materialism, its rebellious nature.

“Once I stepped back and considered it as a serious project, I also realised the potential it had. It’s such an iconic place and gentrification is threatening to change it beyond recognition. In other words, it was becoming urgent to document this endangered culture.” 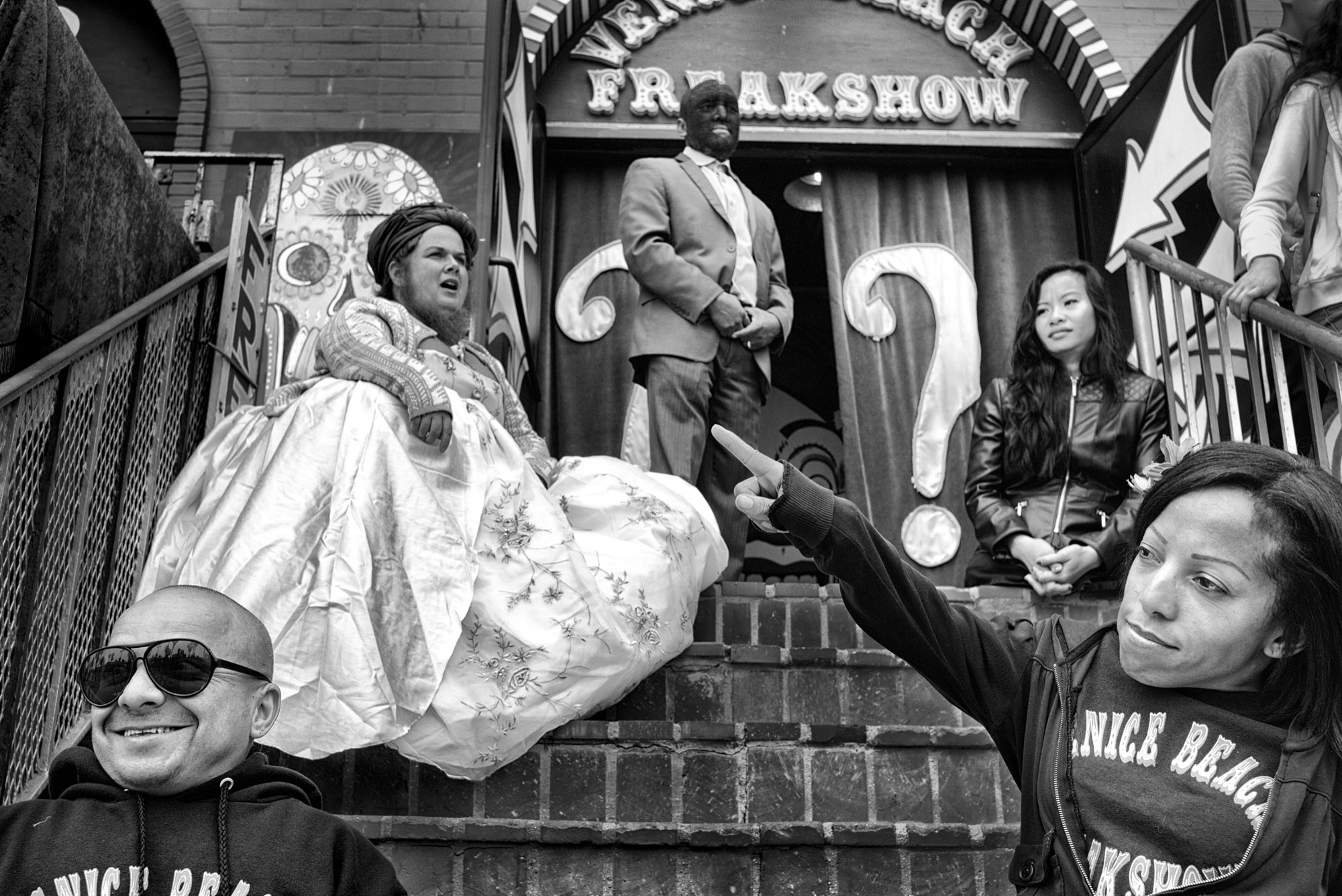 “The closing of the Venice Beach Freakshow on April 30th 2017 may have been one of the most emblematic moments I witnessed in the gentrification of Venice Beach.”
© Dotan Saguy

That decision coincided with a significant shift in Dotan’s life. Born in a small kibbutz just south of Israel’s Lebanese border, he grew-up in a modest Parisian suburb, lived in Manhattan during 9/11 and moved to Los Angeles in 2003, where he now lives with his wife and two teenage kids.

As they were getting married 25 years ago, the couple asked a few friends to buy them a Nikon SLR for their wedding present, thinking it would be a fun way to learn something creative together. 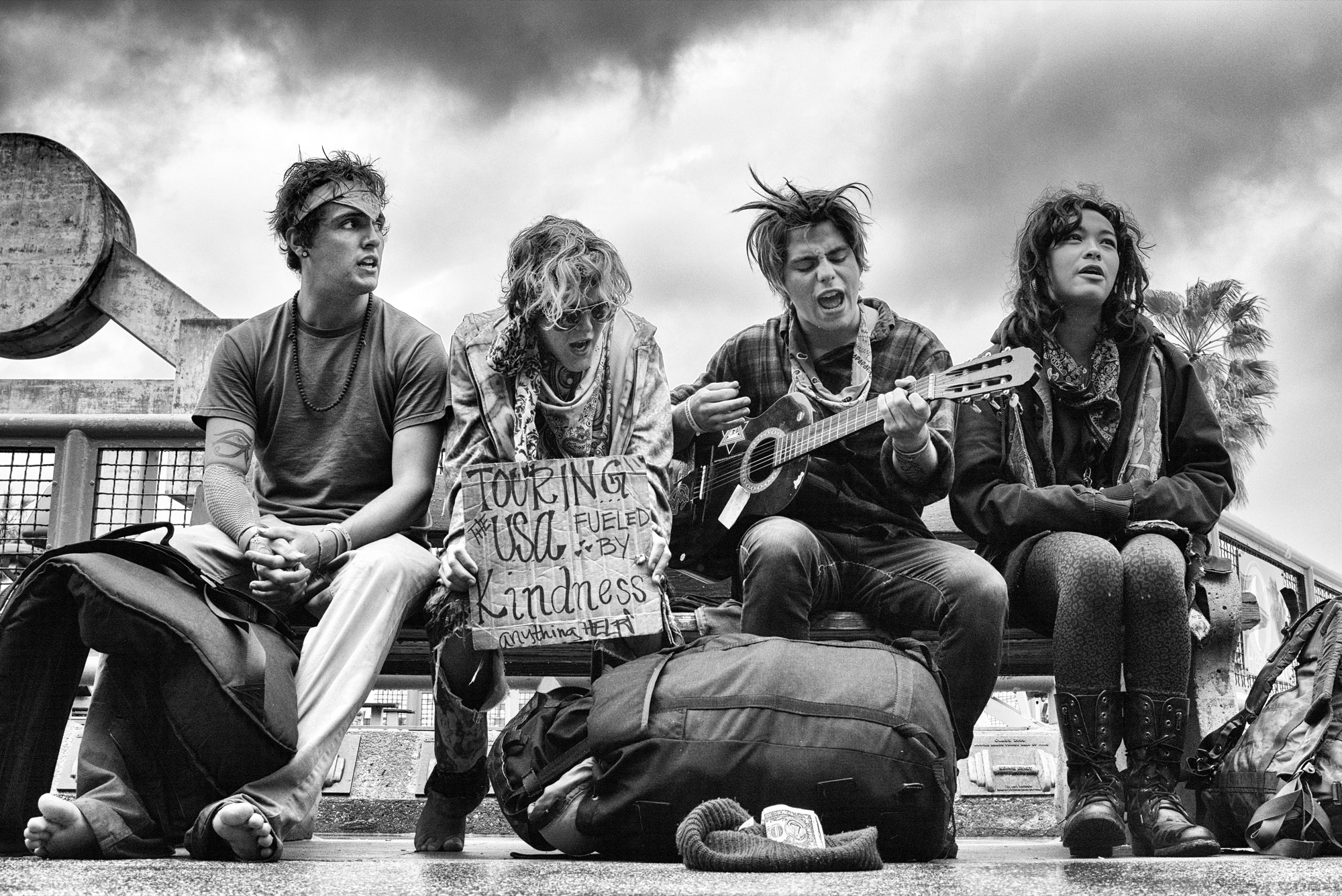 A group of young hippies sing on a bench across from the Muscle Beach Gym.
© Dotan Saguy

Dotan has spent most his career in high-tech business, having trained as a computer engineer before becoming a mobile app entrepreneur.

Over time, the 47-year-old – a bit shy and introverted by nature – realised that photography could connect him with people and worlds he wouldn’t encounter otherwise. “It felt like gaining a superpower,” he says. 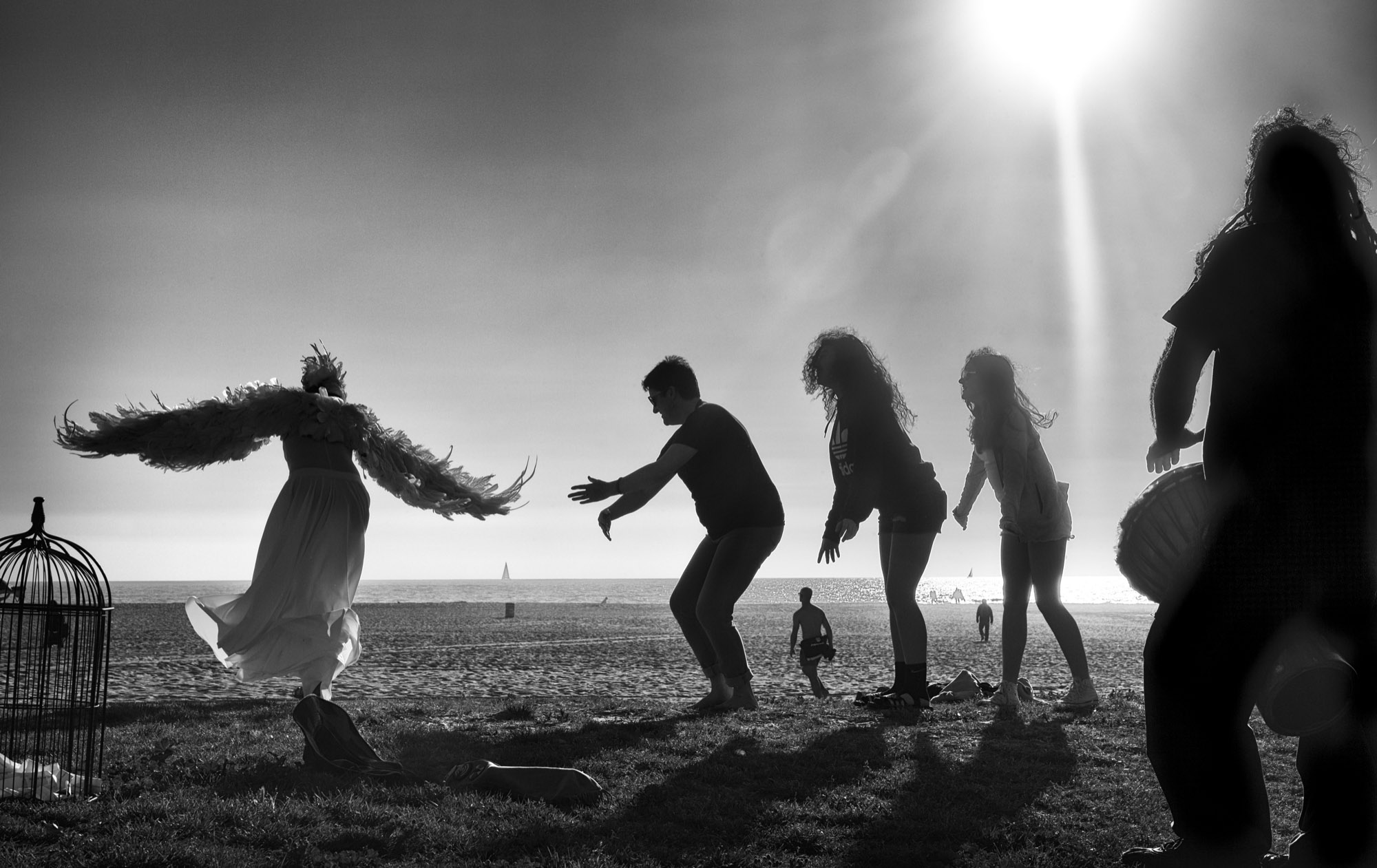 An improvised performance by Elizabeth – a local ar- tist dressed as a white bird, and Freedom, a homeless musician – spontaneously turns into a group dance as a handful of spectators joins in.© Dotan Saguy

So in 2015, Dotan decided to delegate more of his business work and immerse himself in street photography – attending a class at the local community college, taking photojournalism workshops and picking up bylines for the likes of National Geographic and ABC News.

“But in today’s ultra competitive photojournalism world, the sad truth is that even with all this early success no one was going to give me paid assignments yet – so I assigned myself some long term personal projects that were dear to me,” he says. “One of them was the Venice Beach project.” 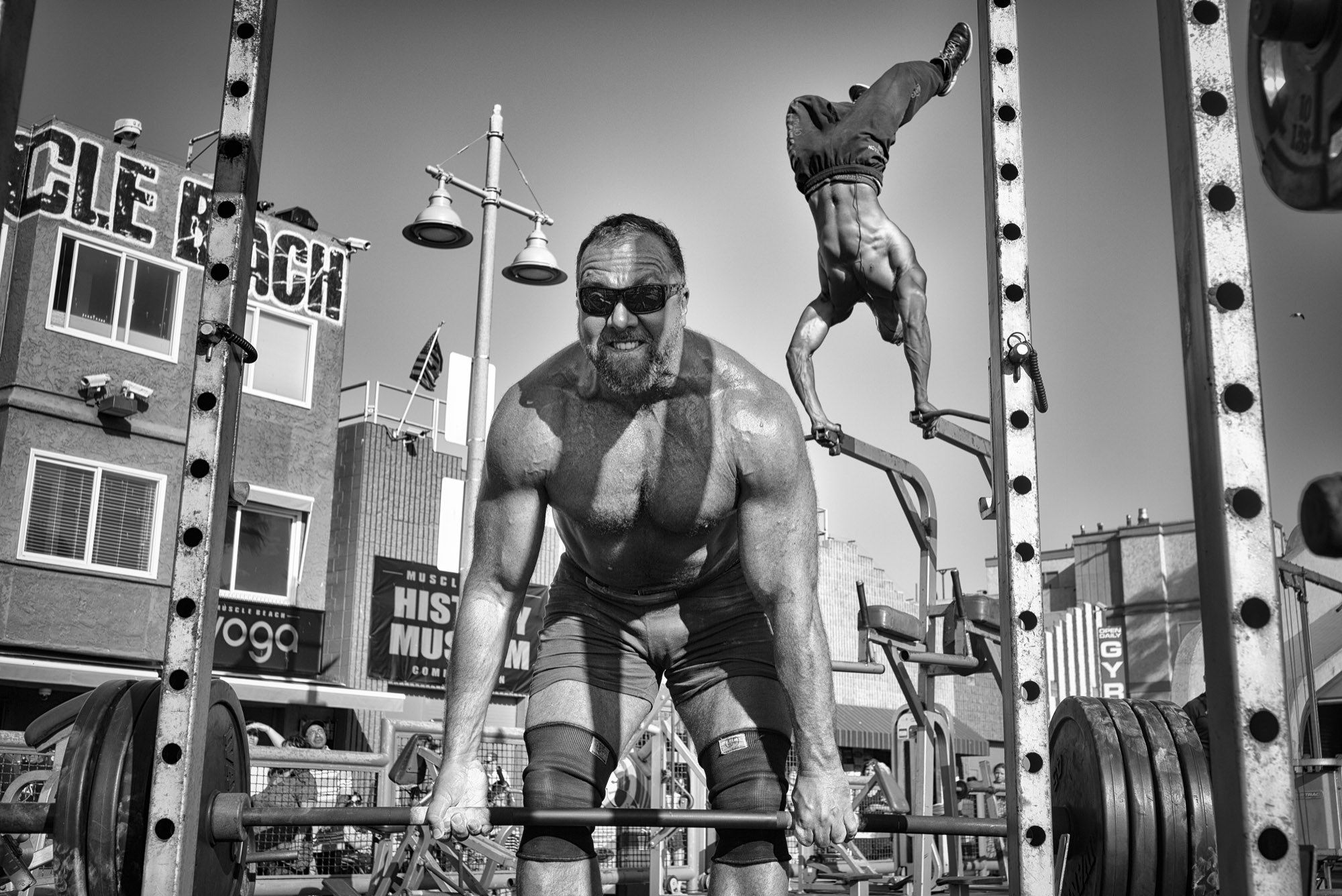 At first, Dotan would try to approach interesting scenes as inconspicuously as possible, blending into the swarms of tourists with their own cameras. Aiming for “hard-to-shoot chance encounters”, he realised that it would take hundreds of visits to successfully capture enough of them.

Clocking up 500 hours, Dotan lost count of the number of times he came back empty handed… but it was so much fun that it never felt like a grind. 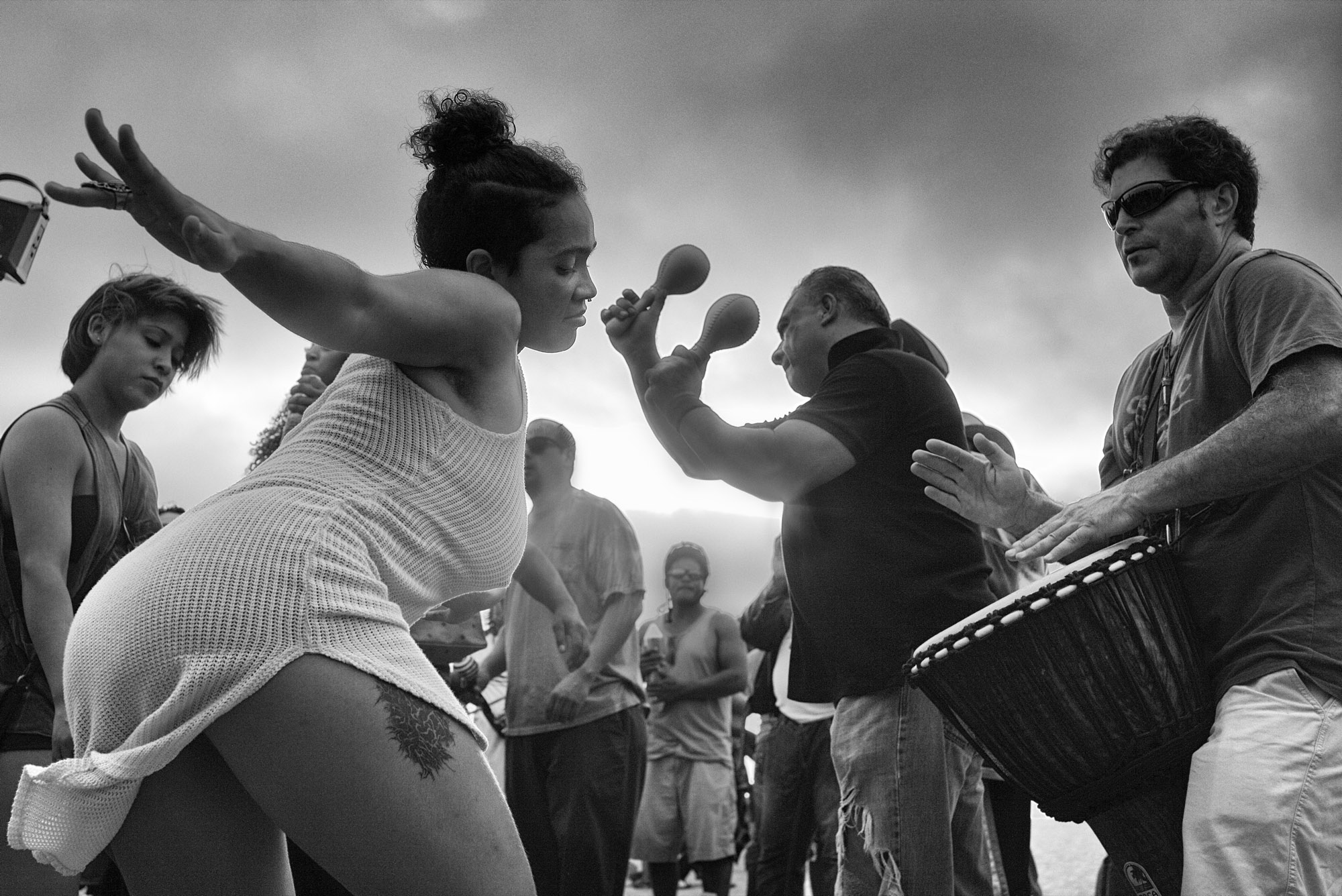 A young woman dances to the entrancing rhythms at the Venice Beach Drum Circle, as the sun sets over the ocean on a warm summer evening. © Dotan Saguy

Instead he found himself trying to layer complex elements, often in motion, so that everything would fall into place at one precise moment.

“It’s like solving a 4-dimensional visual puzzle, time being one of the dimensions,” he says. “Looking for these shots is immensely satisfying. It puts me in a meditative state to chase them.” 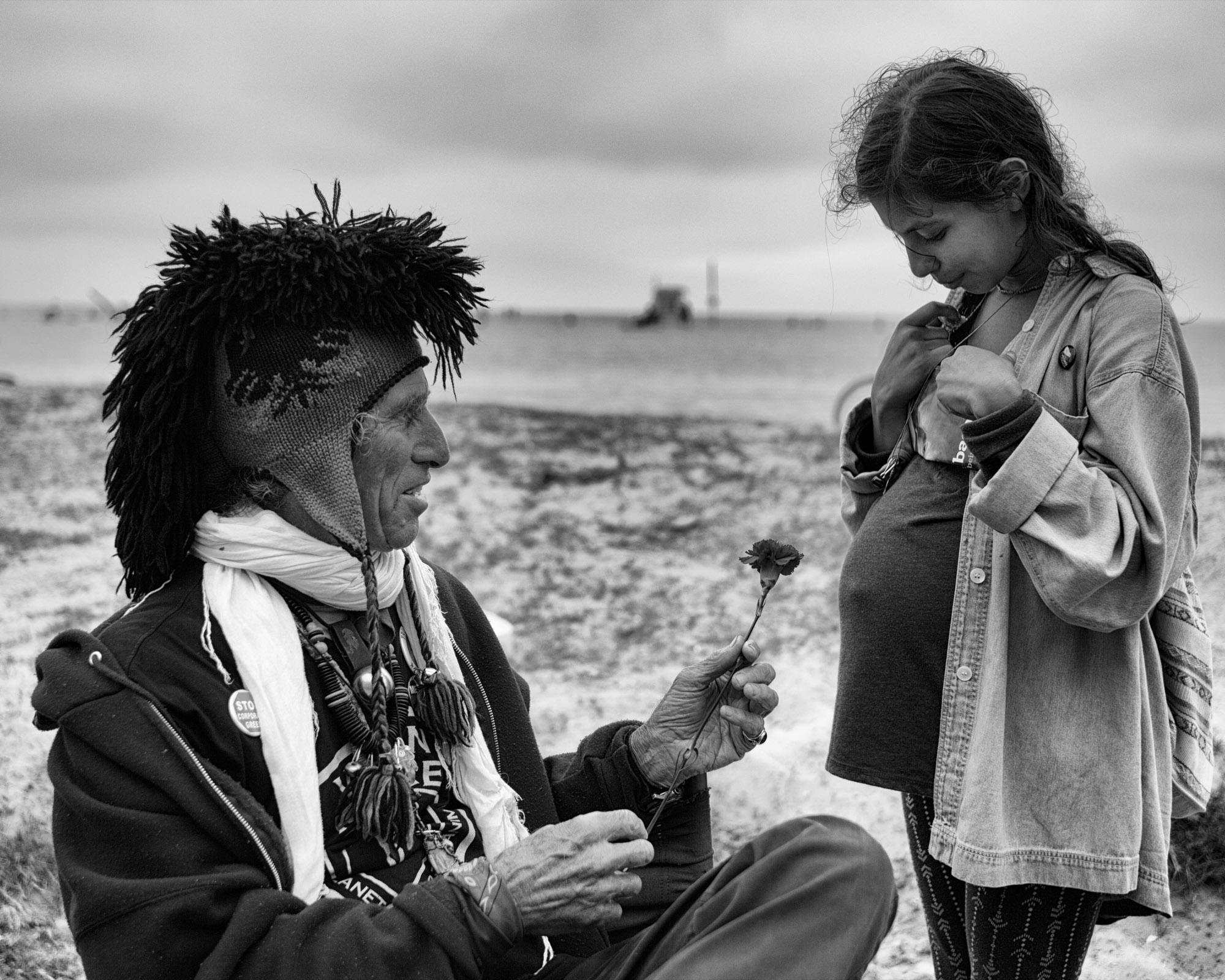 The older man, who goes by the name of “Jingles,” has been preaching for animal rights and a vegan lifestyle for many years from his booth on the Venice Boardwalk. © Dotan Saguy

One day early on in the project, Dotan arrived on the boardwalk and almost immediately found a local mom and her five-year-old son playing with two giant boas in a sand pit behind the Muscle Beach Gym.

He introduced himself, found out what they were doing (minding the snakes while a street performer took a break) and spent time soaking up their stories. 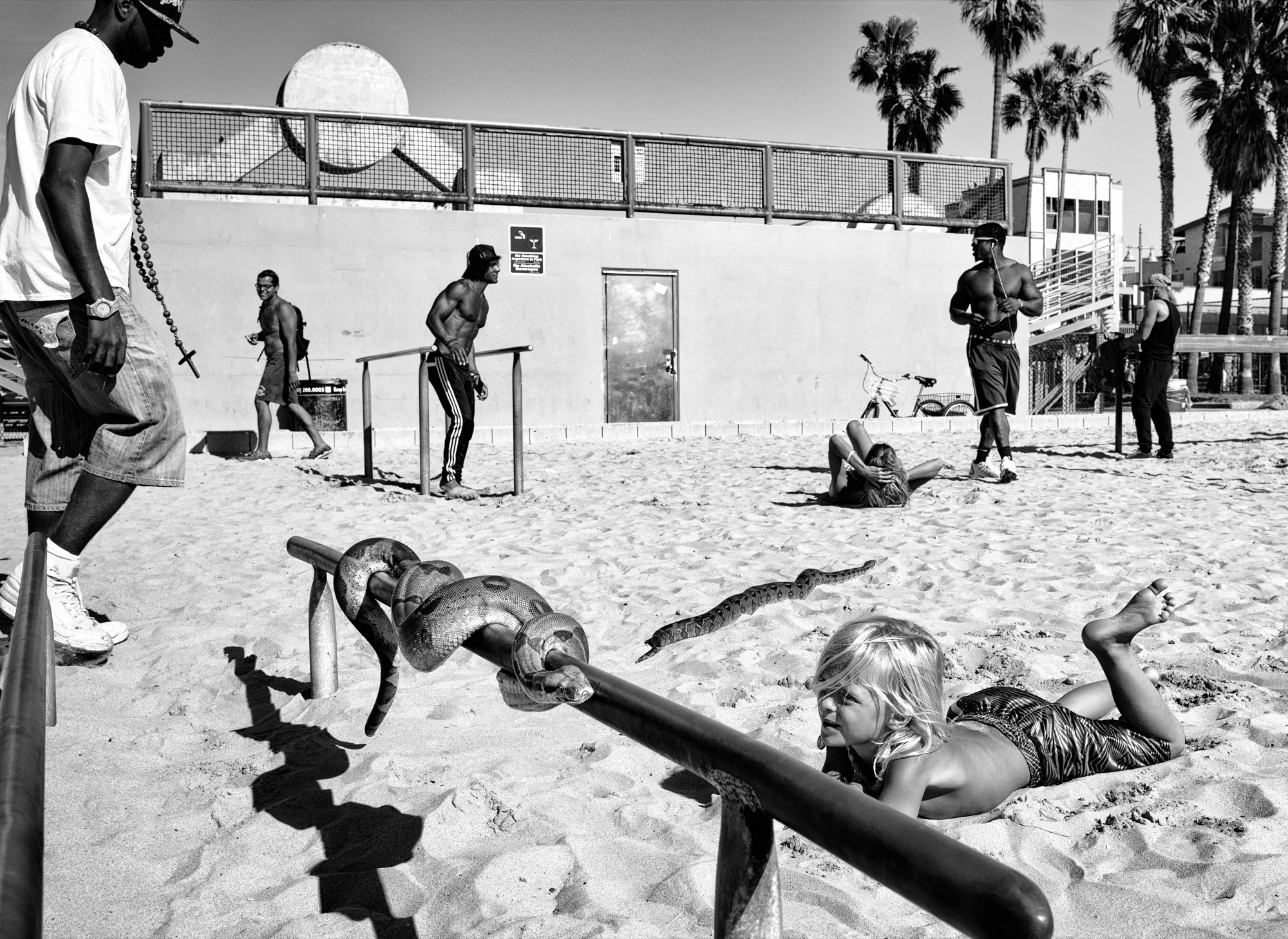 Five-year-old Jackson watches a boa constrictor while anot- her slithers toward his mom Jenna, relaxing nearby in the sand.

That generosity of sprit, that sense of people looking out for each other, was something that surprised Dotan again and again.

“There’s a lot beneath the surface that most tourists don’t see,” he says. “Tourists walk through the Venice boardwalk and all they see are homeless people, freaks, wild kids and buff bodybuilders. 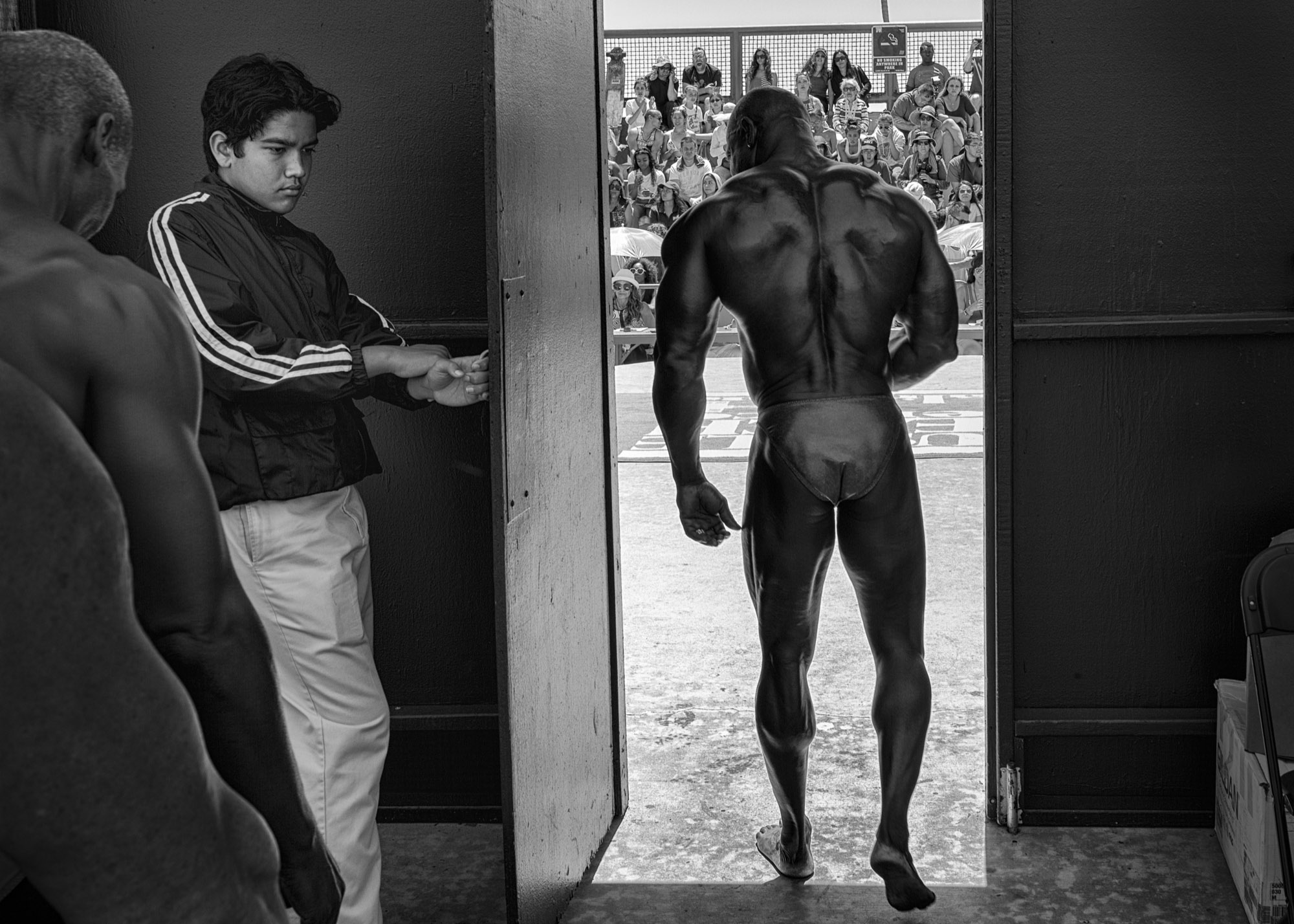 An oiled-up body builder wearing nothing but a speedo enters the stage of the Mr. Muscle Beach contest. © Dotan Saguy

“They go to Venice because on the surface it looks like a circus. But If you spend enough time there you find out that they’re all people with a story to tell.

“The vast majority of them are good, kind, generous people. Some of them have suffered a lot and definitely have their quirks. But that only makes them more interesting in my eyes.” 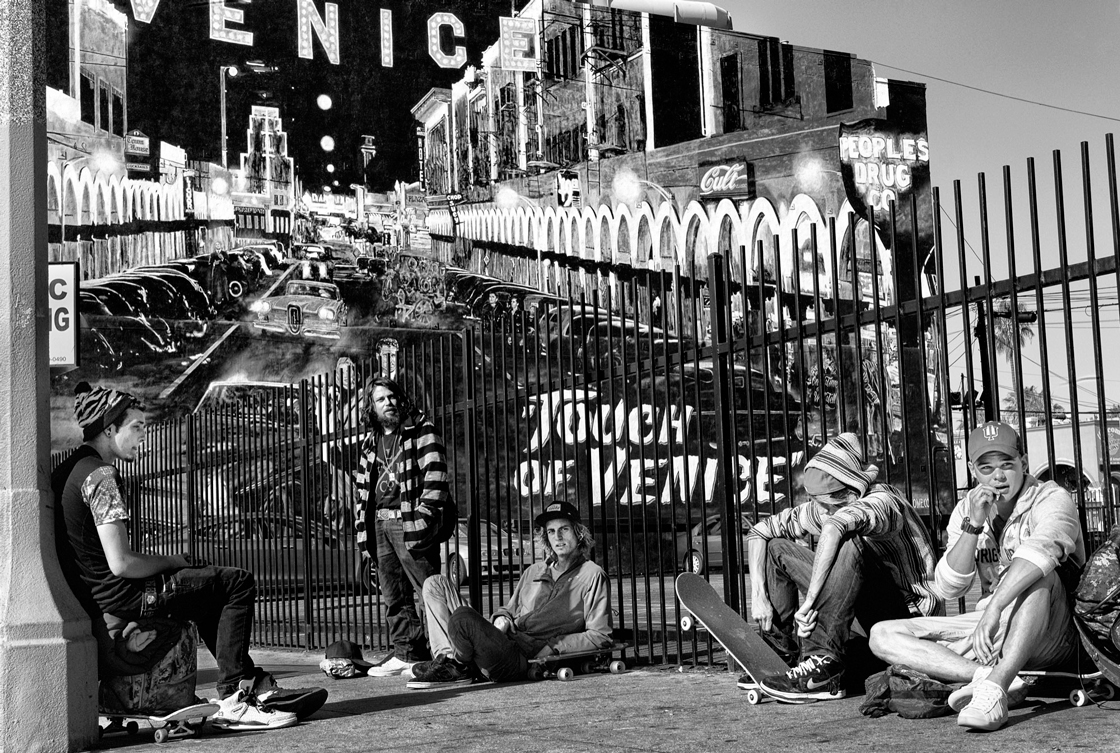 A group of young skateboarders gather to smoke marijuana in the early morning sun in front of the iconic Touch of Venice mural on Windward Avenue. © Dotan Saguy

Now that Dotan has distilled the project into a photo book, Venice Beach: The Last Days of a Bohemian Paradise, he can look back at his business background and see how it informed his path into photography.

One standout piece of advice came from a book called Good to Great: Why Some Companies Make the Leap… and Others Don’t by Jim C. Collins. 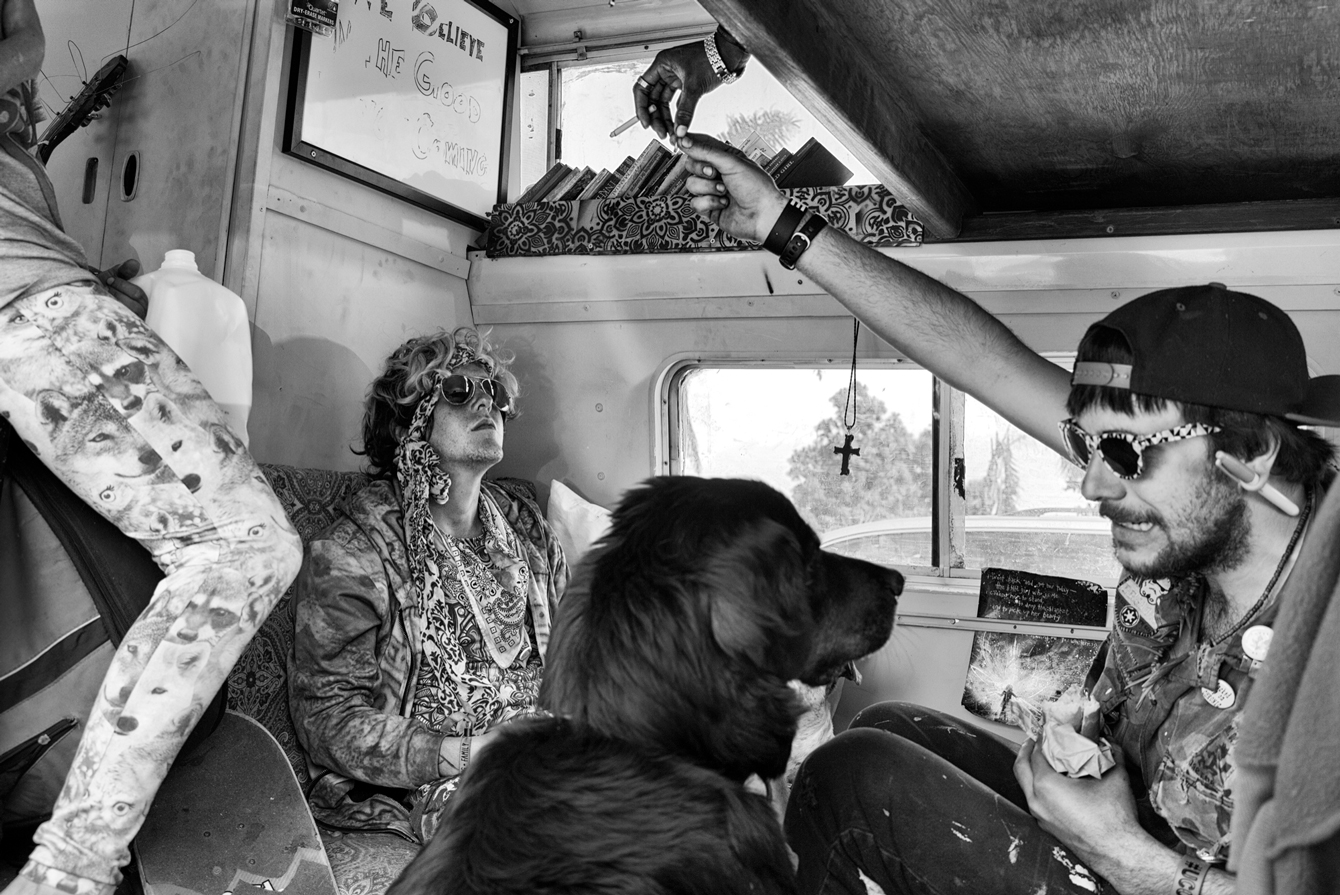 A lot is going on in this old van parked outside the Venice Beach dog park, where the bohemian lifestyle is in full swing. © Dotan Saguy

It explained how successful businesses pick the right projects to work on through the ‘Hedgehog Concept’. It’s about putting yourself at the intersection of three overlapping circles: what you’re passionate about doing, what you’re ideally positioned to pursue and what can advance your career.

“Time is such a precious resource and it’s so easy to get sidetracked that having this advice as a compass is invaluable,” says Dotan. 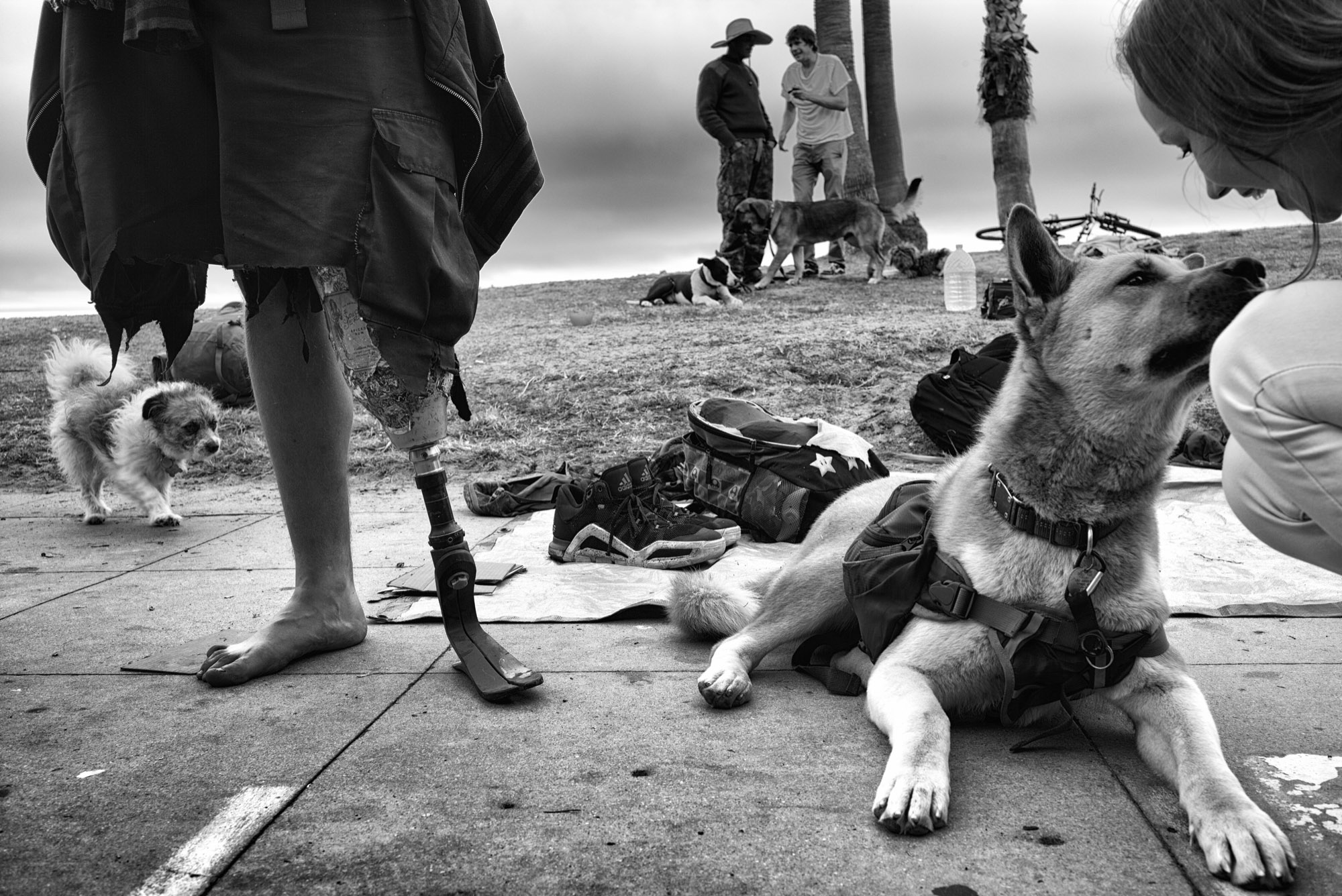 “Hopper, the young man with an artificial leg in the foreground, and his friend T – a middle-aged hippie with the hat in the background — hang out with their many dogs on the Venice boardwalk. A young woman stops to pet one of the furry companions. Within the category that we call ‘the homeless’ is a diverse mix of people. Some are chronically homeless and suffer from mental illness. Others – like T and Hopper – proudly identify as “home free” and come to Venice to live the bohemian lifestyle for a few days before setting sail for another destination. © Dotan Saguy

“By deliberately and consistently focusing on work that I’m passionate about, that I am ideally positioned to shoot and that is publishable has led me to projects such as this one.

“And I think that once you find the right projects for you, developing your style is no longer a concern because your style finds you.”

Linkedin
RELATED ARTICLES
OTHER ARTICLES
For over a decade, gamblers have won big by employing people to place live bets from the court. But does this dubious method still work?
Sean Maung’s photos are a love letter to the Black and brown communities that make up New York.
With skyrocketing rents, packed out viewings, bidding wars and more, renting in London has never been harder.
Rogue landlords are exploiting young and inexperienced renters and leaving them in mental and financial turmoil, reports Niall Hignett.
The two-day long event returned to London this year, showcasing a spectacular parade, steel bands and Caribbean food.
Financial turmoil is pushing people who work in the sex industry into more dangerous and desperate situations as a means of survival.