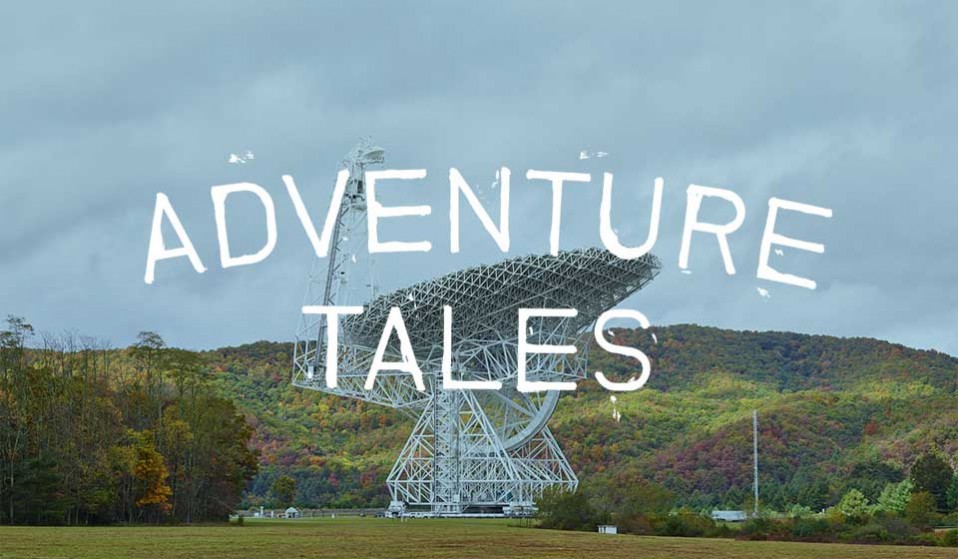 This time, British photographer Emile Holba who in Huck 51 ventured into West Virginia’s National Radio Quiet Zone, 13,000 square miles of radio silence where electrical interference is prohibited to allow the giant Green Bank radio telescope to pick up signals from outer-space. Grab a copy of the mag or check out his great BBC Radio Four series Welcome the Quiet Zone to find out more.

What do you picture when you hear the word ‘adventure’?
Wilderness – entering the unknown.

What did adventure mean to you when you were a kid?
Investigating alternate worlds outside the mean streets of Hertfordshire…

What does adventure mean to you now?
More than just embarking on a physical journey, like camping in arid tundra for the first time or slogging miles over sea ice. Adventure is now seeking a non-exploitative path through our increasingly homogenised planet.

When was the last time you felt completely out of your comfort zone?
Truly understanding the meaning of ‘deep cold’ during the coldest part of winter on Baffin Island. Also truly appreciating how completely reliant one is on modern fabrics and clothing design without the pan-generational skills to combat deep cold that’s passed down through local Inuit communities. Air temperatures of below -50ºc is scary as hell.

When were you last scared?
Being trapped underwater between a rock and a raft in fast flowing rapids. No air pockets and being seemingly stuck for ages before the water spat me out and sent me downstream on my back.

What’s the most adventurous thing you’ve ever done?
Hanging out of the side of a helicopter photographing the absolute destruction of virgin Boreal Forest to construct S.A.G.D oil extraction infrastructure in the depths of winter in North Eastern Alberta, Canada for Greenpeace Norge. The global energy industry’s dirtiest (and largest) secret is very far from prying eyes. Zooming low over the remote, zero-populated wilderness juxtaposed with infrastructure lifted straight out of Blade Runner’s opening skyline was extraordinary.

If your life was an adventure novel, what would the title be?
The World Is Not So Small After All.

When was the last time you saw something completely new for the first time?
Technicians swapping out receiver horns costing $6million-a-pop on top of the receiver room suspended 200ft above the 2.3 acre antenna of the Green Bank Telescope in West Virginia. They were swapping horns out like they were batteries in a game console. Totally new to me and totally surreal.

How do you bring adventure into your everyday life?
Enquire and converse with people.

Complete the sentence: A life without adventure is…..?
Like being a potato without ever being chips.

If you were on a yoga retreat, or in therapy, and were told to picture ‘your happy place’, what would it look like?
Pretty well anywhere in Western Montana in fall.

What in life gets your adrenalin pumping?
Mountain biking – I bought my first bike in 1989 and have loved the versatility of cross country biking ever since.

If you had to walk around the world, what would you carry in your backpack?
Totally cliched for a photographer I’m afraid – a camera with a super sharp standard prime lens.

What’s the one thing on your bucket list you’ve never told anyone about before?
I don’t have a bucket list however I wouldn’t pass up investigating the volcanic ranges in Russia’s far east.

Reddit
RELATED ARTICLES
OTHER ARTICLES
The Adventure Issue takes Huck’s search for an indie culture manifesto into uncharted territory.
South Korean photographer Pep Kim has documented New York City’s skate scene with a fresh, outsider’s perspective since arriving from South Korea.
With a surf film festival in London and a predilection for cold-water surfing, Chris Nelson finds adventure in unexpected places. Here he reflects on the wild tales of his life.