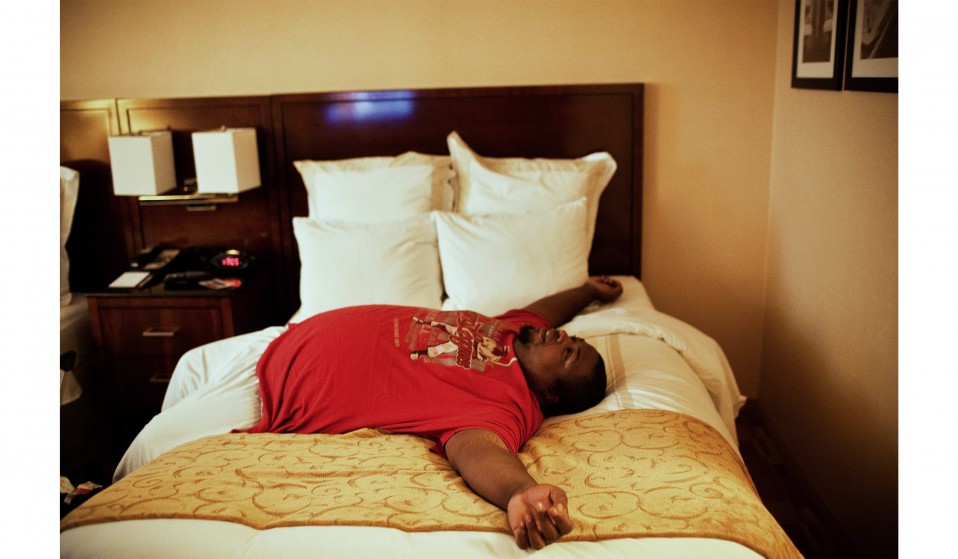 Jared Soares’ Small Town Hip Hop project taught him the value of engaging with the community you hope to capture.

Jared Soares’ Small Town Hip Hop project taught him the value of engaging with the community you hope to capture.

Jared Soares is a portrait and documentary photographer based in Washington DC. Through his Small Town Hip Hop project he learned the importance of community and that to do work that mattered to him, he needed to be more than just an dispassionate observer of his surroundings.

When I started working on Small Town Hip Hop, the photographs I was making were in the tradition of witnessing candid moments in the lives of individuals as they unfolded in front of my camera. The early work from that project was hollow and a carbon copy of work done by other photographers that had been marked in my psychology as classic and successful. Since this was my first self-­initiated project, I was figuring out my voice, trying to get comfortable with who I am as a photographer and attempting to develop my own way of seeing.

It wasn’t until two years into the project that I realised I was making a self­-portrait through the people I was photographing in the hip hop scene in Roanoke, Virginia. This became apparent while I spent time with Poe Mack, a rapper from Salem, Virginia on a couple tour dates in 2011.

Before hitting the road to Atlanta, Georgia for a concert, where Poe Mack would be the opening act, the longest I had spent with him was maybe an hour. Roanoke, Virginia is a small place and the number of rappers is even smaller, so everyone with a serious interest in hip hop knows each other. I had met Poe Mack in passing at his home studio, where he was recording a rapper that I happened to be following around for the day. Poe and I kept in touch and when I found he was going on a small East Coast tour, I proposed the idea of tagging along. In generous fashion, he obliged.

Nine hours in a car is a long time but it’s a great opportunity for conversation. While bombing our way down Interstate 85 through the Carolinas, Poe shared his creative process, motivations for his music and how he treated every aspect that goes into song-craft. As I listened, I kept seeing similarities with what I was doing with photography. Poe and I were much the same, two young men, trying to develop their skills and to push themselves creatively with the hope of reaching a goal. Our journeys as artists paralleled each other.

Though I’ve moved on from Small Town Hip Hop, the project was a catalyst for exploring my backyard, wherever I happen to be living. The concept of community is a cul­-de-­sac that I’m wandering around and seem to come back to with each project, big or small. I’m immersed in the idea of showing a specific group and how they identify themselves to depict traits that can be read as universal. I’m no longer a fly ­on ­the ­wall, just looking for differences.

Photo caption: Poe Mack tries to grab a quick rest after driving for several hours to from Virginia to Georgia in order to open for 9th Wonder. He was tired. I was tired. But he was excited for the opportunity to get to introduce his music to larger audience and I was happy to be a part of the journey.

Find out more about Jared Soares.

Linkedin
RELATED ARTICLES
OTHER ARTICLES
Last week, Tower Hamlets council removed its nudity-restricting licensing conditions in a huge win for London’s kink community.
Steel City is often overlooked when it comes to the country's cultural radar despite its role in shaping electronic music.
A young woman recounts her experience of being harassed by anti-choice campaigners as she was seeking an abortion in Glasgow.
Following the release of his latest album, the rapper talks about finding a new approach to songwriting, attitudes to poverty, and why his music is more than a political statement.
One year on from the fall of Afghanistan to the Taliban, Tiara Ataii speaks to those who have been forced to make the treacherous journey to Europe for safety, and the barriers and horrors they have faced.
Protestors gathered outside Downing Street following the latest atrocities committed by Israel against Palestinians living in the besieged strip.