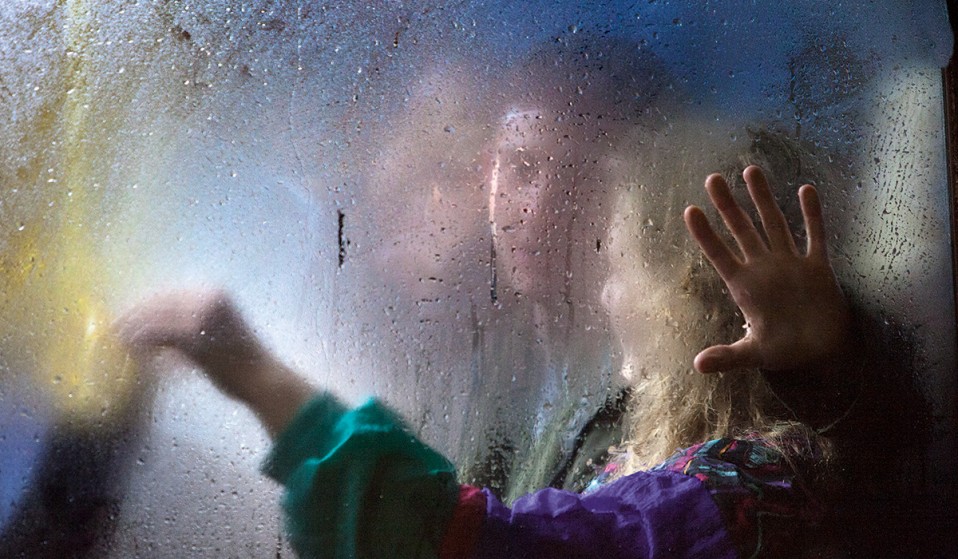 Across two frosty winters, Nick Turpin photographed travellers on the night bus through steamed-up windows. Capturing a cross section of society, crammed into one space yet separated by thoughts and daydreams, his images have come together to create On the Night Bus.

Lurking in the shadows with his camera poised, the Elephant and Castle roundabout in London became something of a second home to Nick Turpin on cold, wet nights over the last two winters. Ensuring that the weather and temperature worked accordingly to steam up the bus windows in the seasonal darkness, Turpin discovered a diverse range of captivating characters.

It would be easy to mistake the photographs in On the Night Bus for paintings. Where blurred bus windows soften the contours of faces and figures behind them, impressionism meets hyperrealism; the lighting is almost akin to a Rembrandt. Filled with romantic possibility, Turpin’s compositions offer a unique insight into the lives of others. 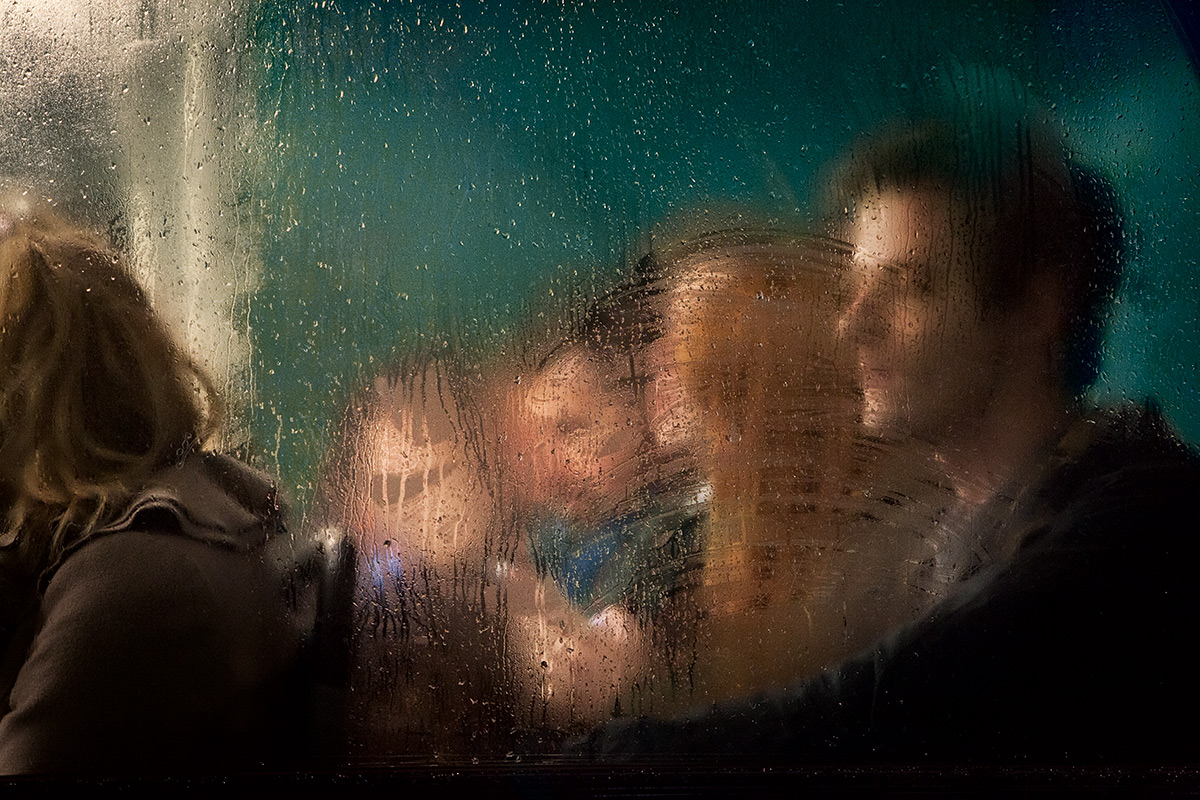 Why did you choose London for this project?
London has been my home for 28 years, it’s the biggest city in Europe and I’ve photographed on its streets for most of that time. This series started with a single observation one evening from a street-side café table and grew from there, I saw a figure in a frosted steamed up bus window and thought, that’s often me in there. I was really surprised at how beautiful this mundane scene was.

I have often travelled to photograph but there is something autobiographical about photographing in your own home city, it has more personal relevance but it’s also harder to find the special and unusual in the familiar. 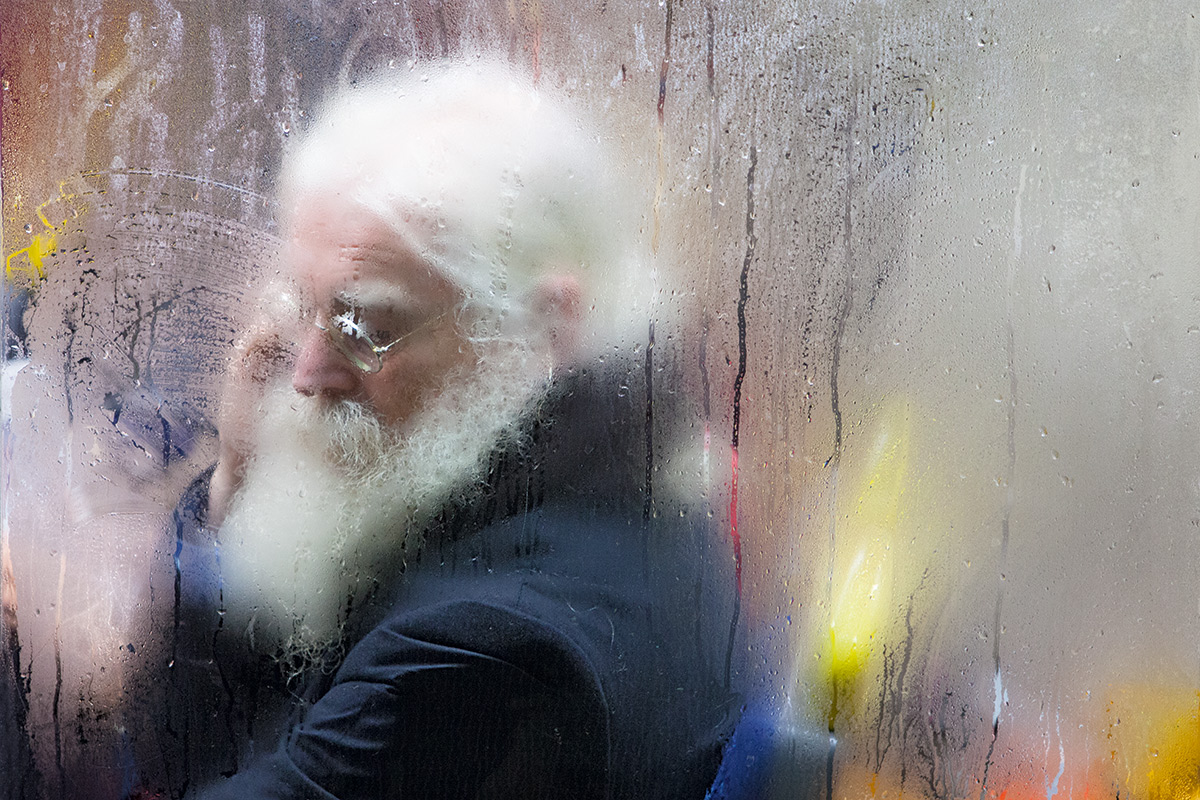 Why did you choose to take all of the photographs during winter?
As a street photographer I take most of my pictures in the good weather and light of the spring and summer months, I deliberately wanted to set myself a winter project, something I could do between commissions in the darker, wetter days. On the Night Bus certainly ticked that box.

I had to shoot in a big coat with fingerless gloves and hang around in the cold and wet through the rush hour on many evenings. The cold temperatures and wet weather were inherent parts of the picture making, I would only go out if it had been wet during the day or if the temperature was down in low single figures. This is when I would find the steamed up glass and droplets of water that made the images so painterly.

Photography is a revelatory act so I was making a study rather than trying to say something with this work. I didn’t know what I would find when I started intimately watching commuters. I became fascinated by seeing these people between work and home when they weren’t in acquaintance with people they knew. Mine was a rare glimpse into the real person in transit between two worlds. 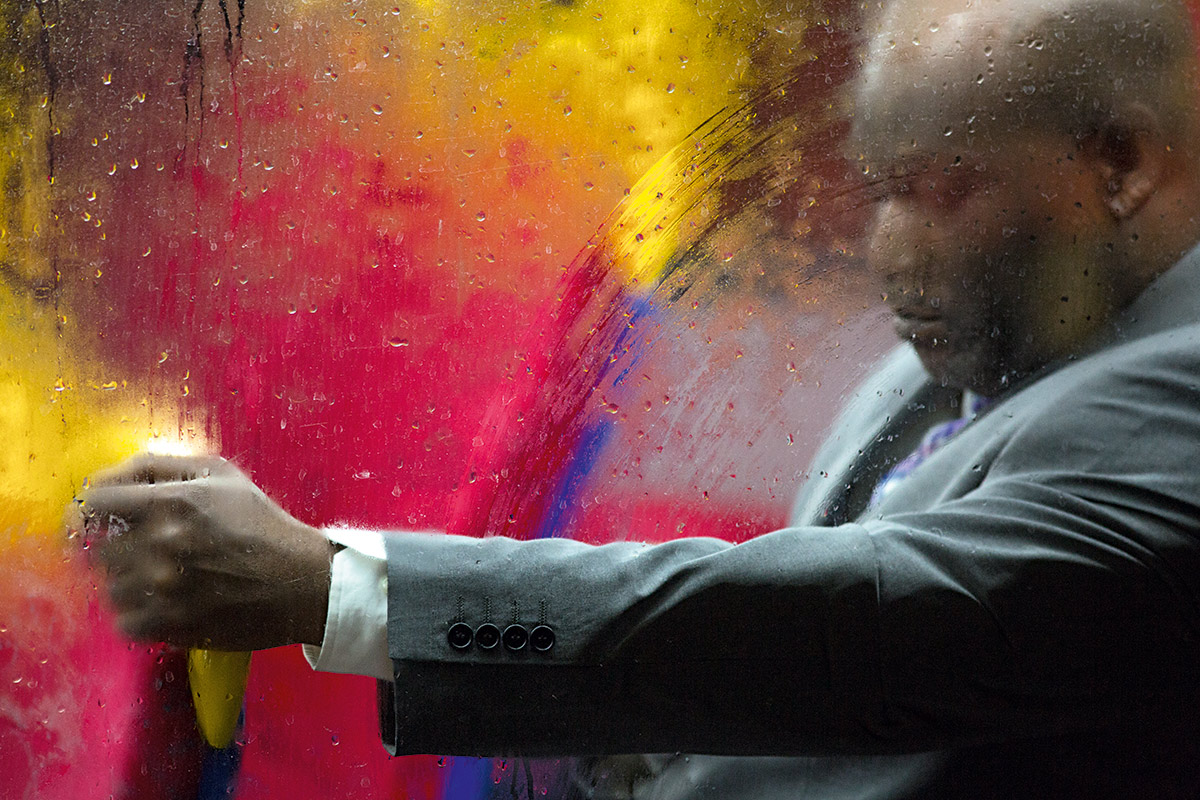 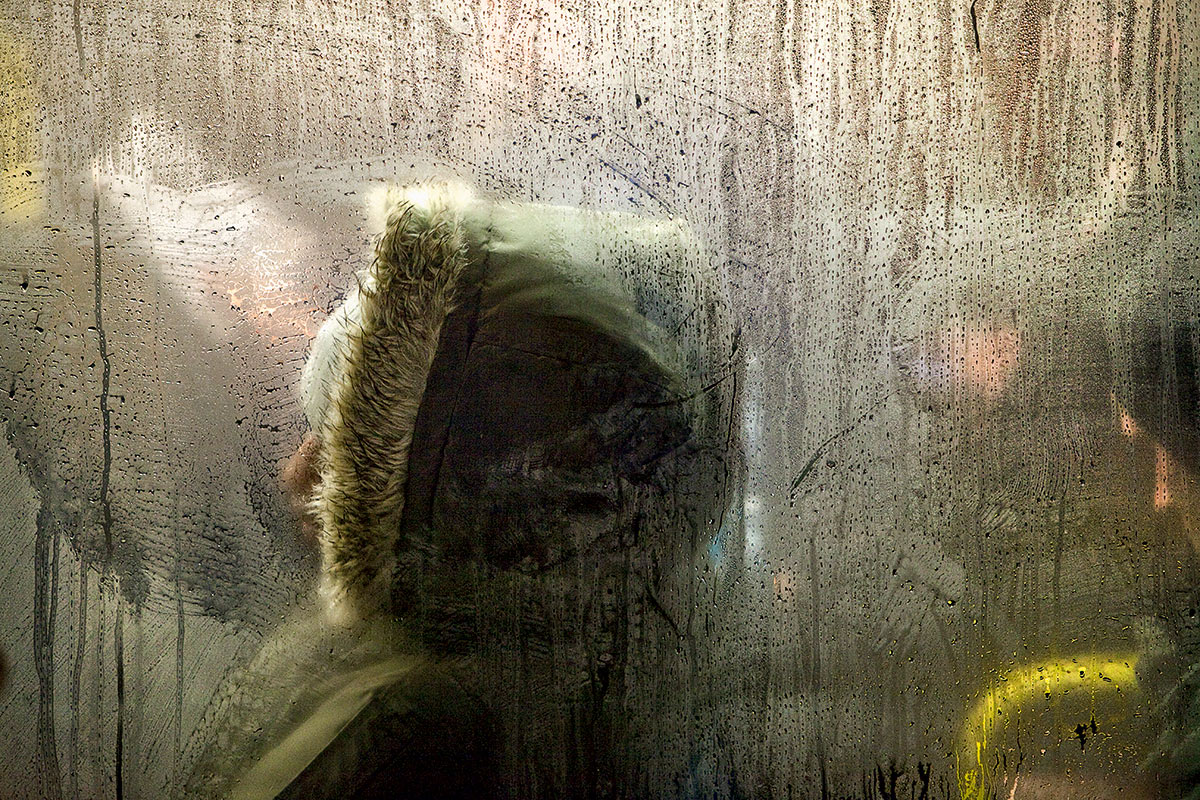 Were peopled weirded out by what you were doing?
Only one person ever saw me from the bus, in four years of making these shots, I was looking down this long lens from out in the dark and then suddenly there was eye contact. I lowered the camera and this guy gave me a huge smile and I laughed back, it was kind of a nice moment. I would also see the same people again and again but just wearing different clothes and reading different books, I have several pictures of the same people from different months and years.

What intrigued you about bus commuters specifically?
There is something about people in transit, they are off guard, vulnerable, staring, thinking, glassy eyed. I felt I was seeing people in a private moment but in a public place. It is a rare situation to candidly observe a stranger so intimately but the glass window and the dark night facilitated these close glimpses into another person’s day. 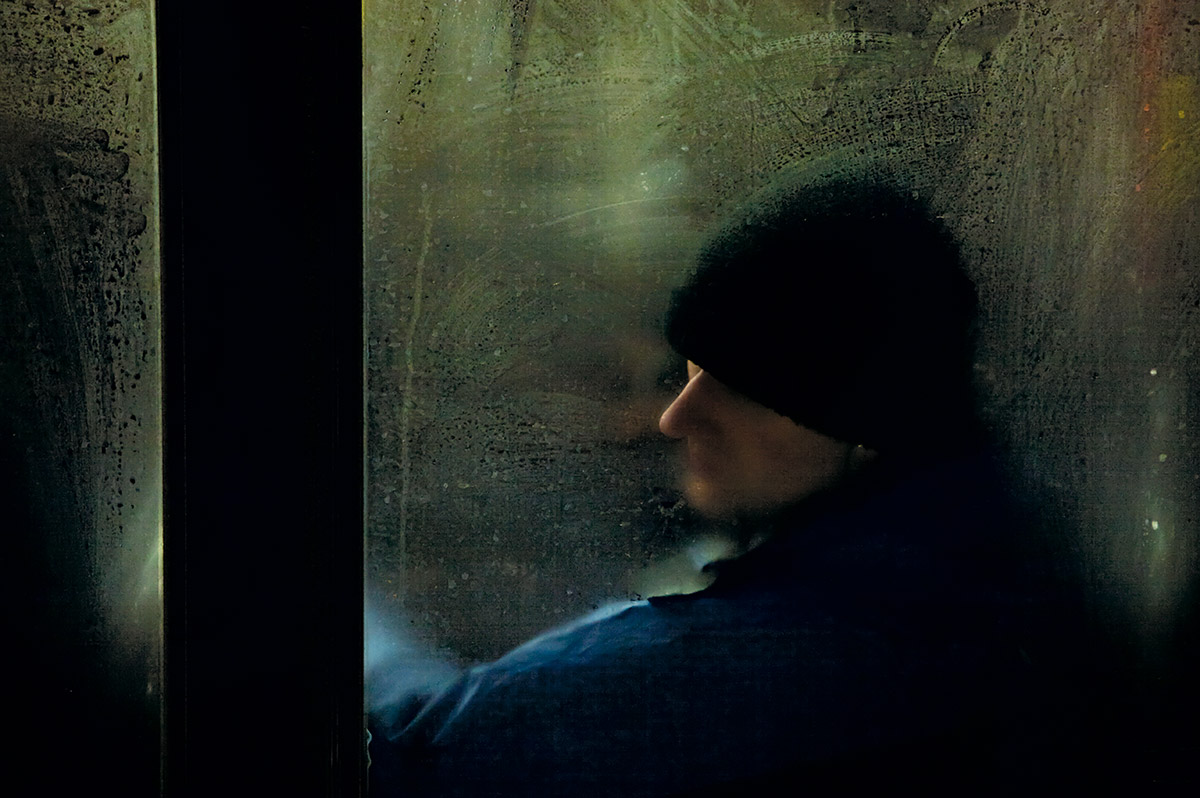 What did you notice about the different kinds of people on these buses?
The bus passengers passing through Elephant and Castle in South London, where the pictures were made, were a complete cross section of society, all ages, classes and ethnic backgrounds brought together for this one journey. A lot of people were using digital devices to pass the time, a lot wore headphones but most just sat and stared as if the journey was a time for thought and daydream.

You say that ‘there’s a strong relationship between the photograph and the scene recorded’, what do you mean by this?
The photograph is a flat, two dimensional pattern of tones and colours that we interpret into a picture. Many question to what extent it can be a document of an actual three dimensional scene or event. But I see the photograph used constantly in society as a record of good times, of family or lovers of achievements and of the last remaining evidence that a person was here.

My mother asks me for pictures of my children and never for a moment questions the relationship between the paper image she holds and the flesh and blood children she loves. I still believe that capturing a moment to hold forever is the camera’s best trick and it is at the heart of all my picture making. 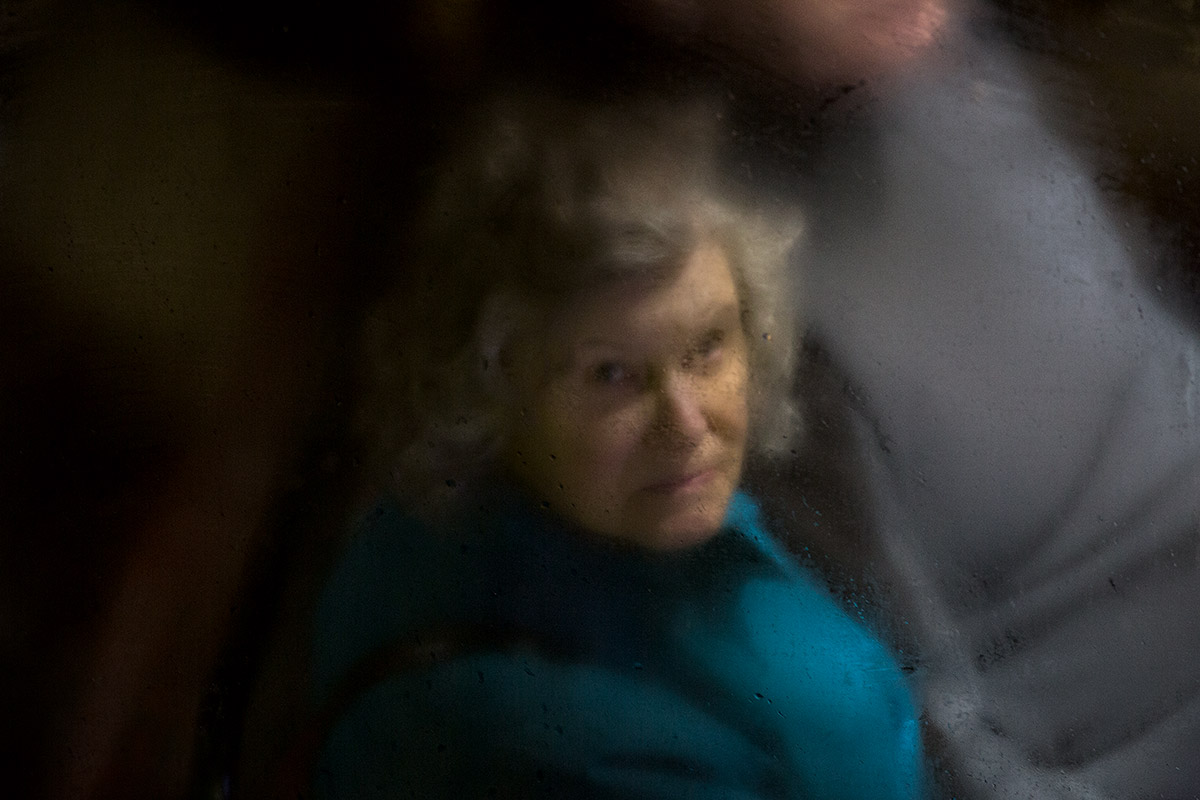 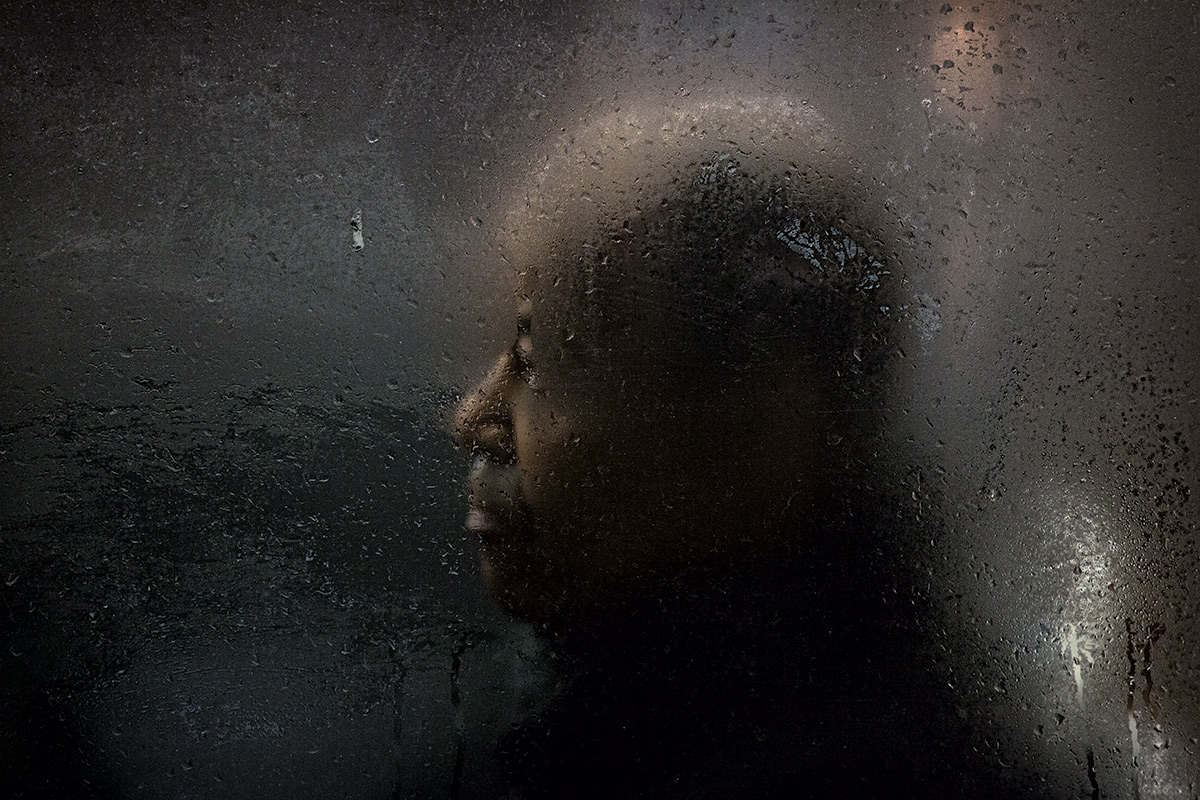 I’m very aware of the anonymity of living in a huge city like London, I know hundreds of people here but I don’t expect to ever see any of them as I walk the streets. I think you can see that in my bus pictures, the passengers are alone and anonymous in the company they are keeping for their short journey. I also have a sense that cities represent some sort of pinnacle of human development, we had to organise ourselves as a species and learn to cooperate, trade and farm in order for cities to be supported.

Cities are the centres of political power, culture, education and the arts and yet I wonder if we have lost a sense of community and kinship with the people around us: many of us don’t know our neighbours and rarely speak to a stranger on the tube. I think my photographs touch upon that distance between us all, even though we are all physically packed close together in flats and trains and buses.

On the Night Bus is published by Hoxton Mini Press.

Linkedin
RELATED ARTICLES
OTHER ARTICLES
Satirical culture in the UK routinely protects the powerful and punches down. It’s time people stopped laughing along, writes Elia Cugini.
Shifting the focus from the cost of living crisis to tackling obesity while many starve or freeze is farcical and pointless, writes Fatzine founder Gina Tonic.
Following the success of her debut novel, the Tottenham native is restating her commitment to the place that made her.
With their latest capsule collection, SCRT have constructed their own mythology, based on the story of a fictional meteor shower that hit a small Scottish town.
The revered showbiz chronicler recalls his journalistic beginnings, documenting subcultural scraps in the ’80s.
Following the release of his newly republished 1991 book, Redheads, the American photographer reflects on his celebration of ginger people and their magnetic power.