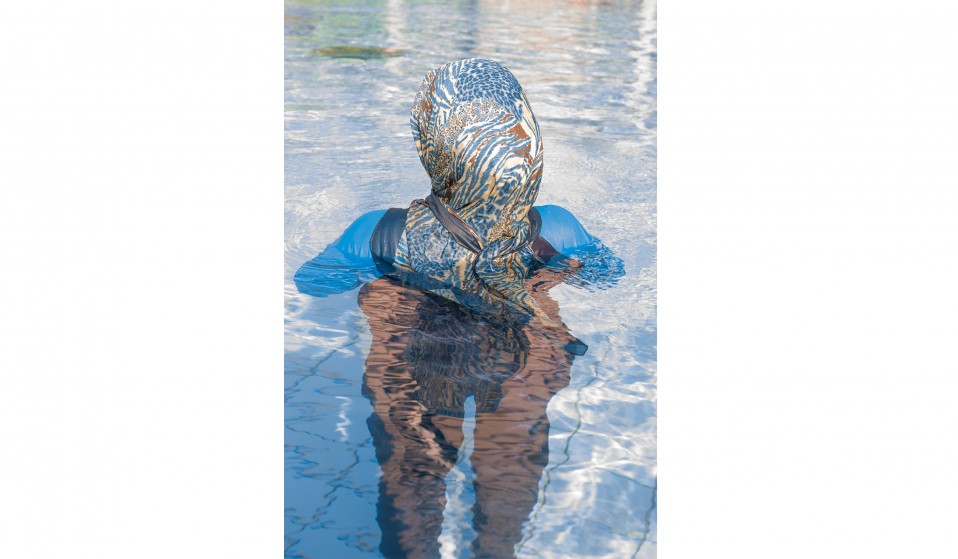 Photographer Melina Papageorgiou’s Burkini series challenges how Muslim women are represented and the stereotypes perpetuated about the Middle East.

Photographer Melina Papageorgiou’s Burkini series challenges how Muslim women are represented and the stereotypes perpetuated about the Middle East.

Since childhood, photographer Melina Papageorgiou has been fascinated by water. “I grew up in Greece near the sea and I was always in the water,” she says. “For me, water is an element of expression, of freedom and of moving your bodily freely. It’s this magical, open place where you can be yourself.”

While living in Libya as a young teen, Melina saw a Muslim woman entering the water fully-clothed for the first time. “I was fascinated,” she says. “It left a lasting impression on me, unconsciously.” Her curiosity was reawakened years later, when she saw a burkini for the first time. 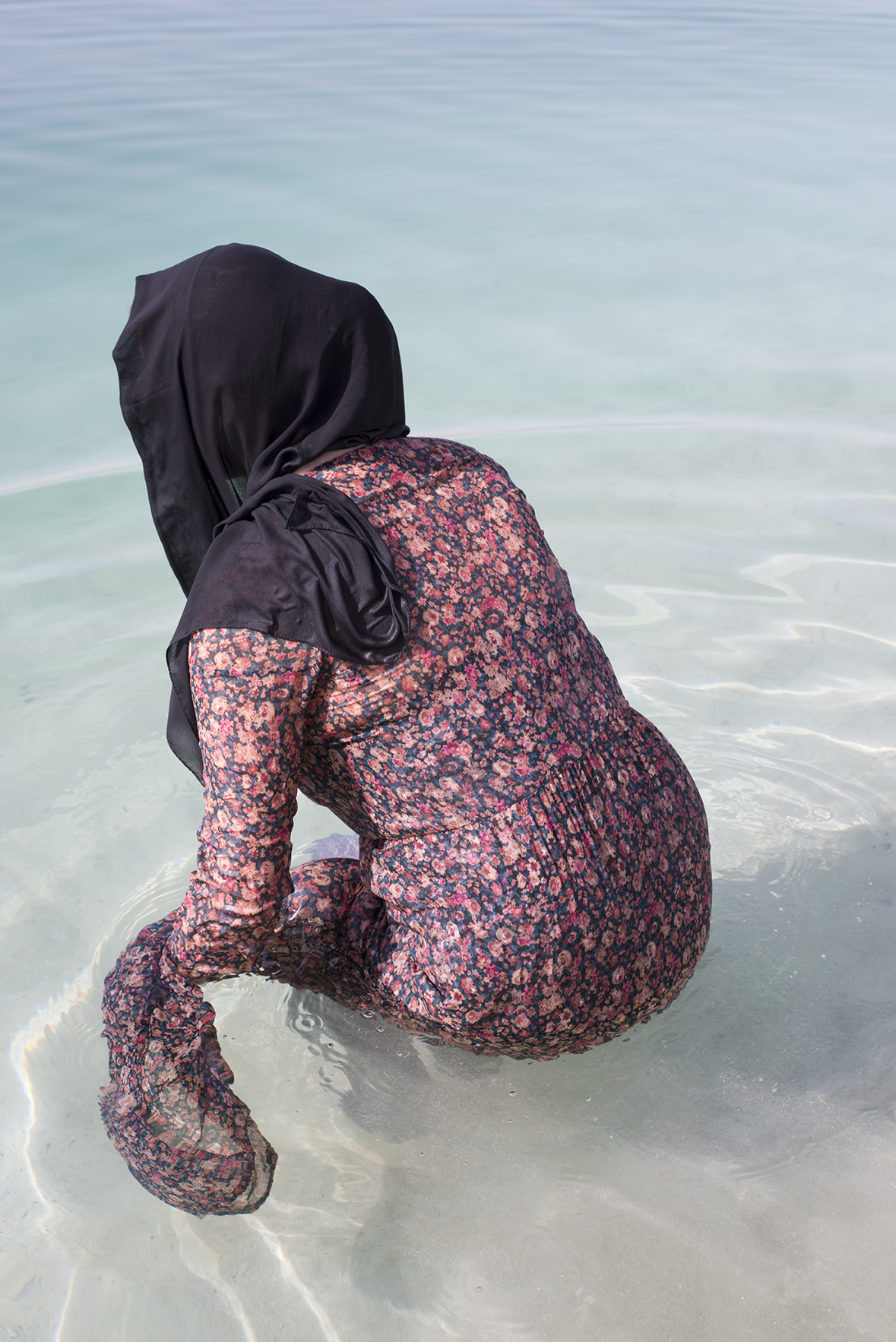 The burkini was invented in 2004 by Aheda Zanetti, an Australian Muslim, to give women the choice of a more practical way to enjoy sport, swimming or the beach, without compromising the principles of their faith. As the burkini’s popularity has grown, sections of European society have become fixated on it too – although from a much-less empathetic perspective than Melina’s.

The furore around the French burkini ban was the high water mark of an often bitter and polarised debate over the highly-politicised item of clothing. Its defenders argue it signifies a liberalisation of restrictions on Muslim women and their growing participation in activities like sport, while critics see it as a dark tool of oppression and a threat to European values. 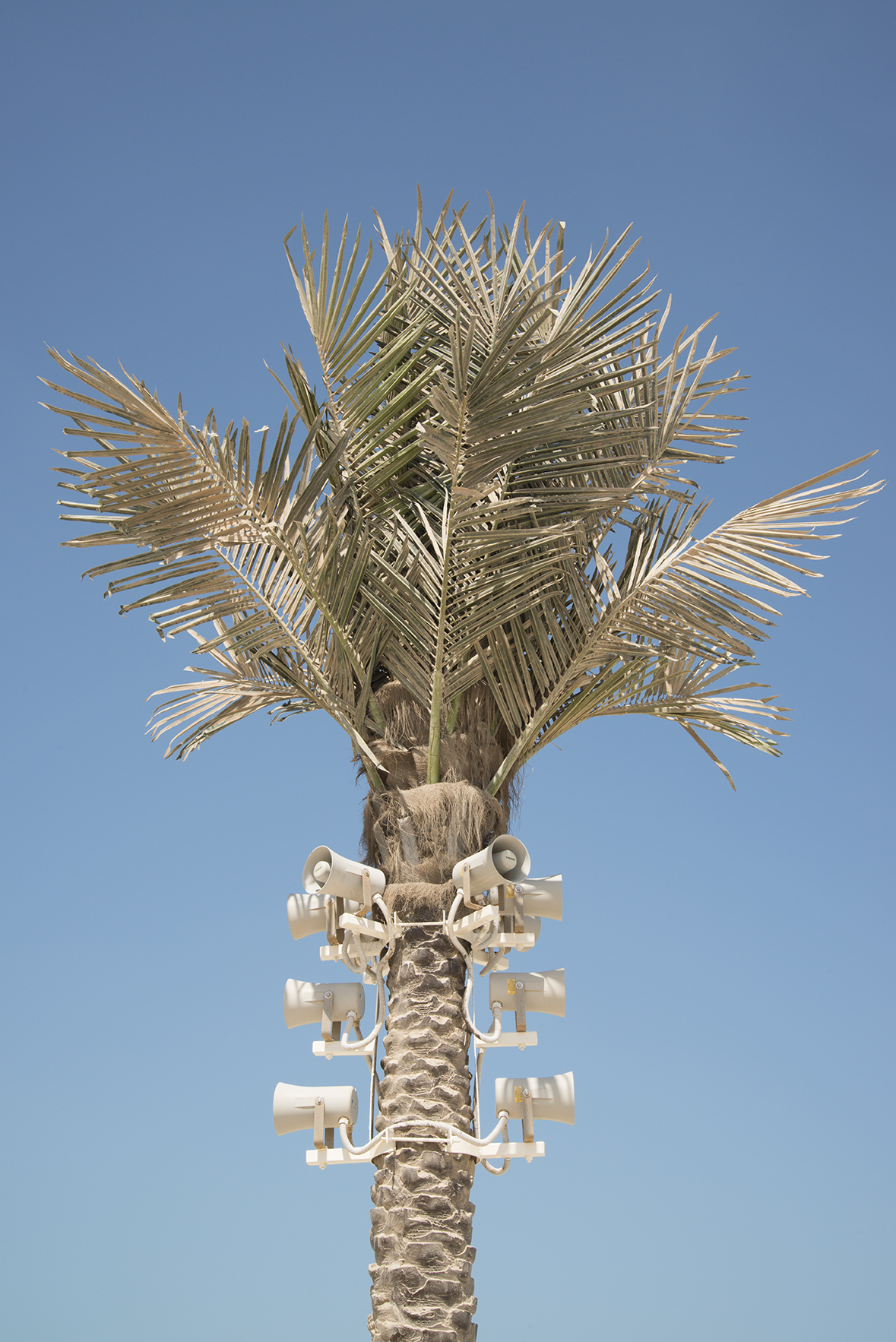 Melina’s photobook Burkini is a challenge to the negativity that surrounds the whole debate. It’s a celebration of the burkini – for their beauty and unique aesthetic qualities – and the women who wear them, whose voices are so rarely heard. Shot in Abu Dhabi in the United Arab Emirates, Burkini is a tender photographic study that blows away the veil of stigma surrounding the much-maligned garment and the Arab society in which these women live.

“You’re always faced with these fanatic, polarised opinions in any discussions of the burkini: either it’s a tool of oppression or an object of liberation for women,” Melina explains. “I’m not interested in whether the burkini is good or bad – there’s no idea of right and wrong. I wanted to show the complexities and subjectivities around the burkini, to give this debate more nuance. There’s a truth that exists between these two extreme perspectives. 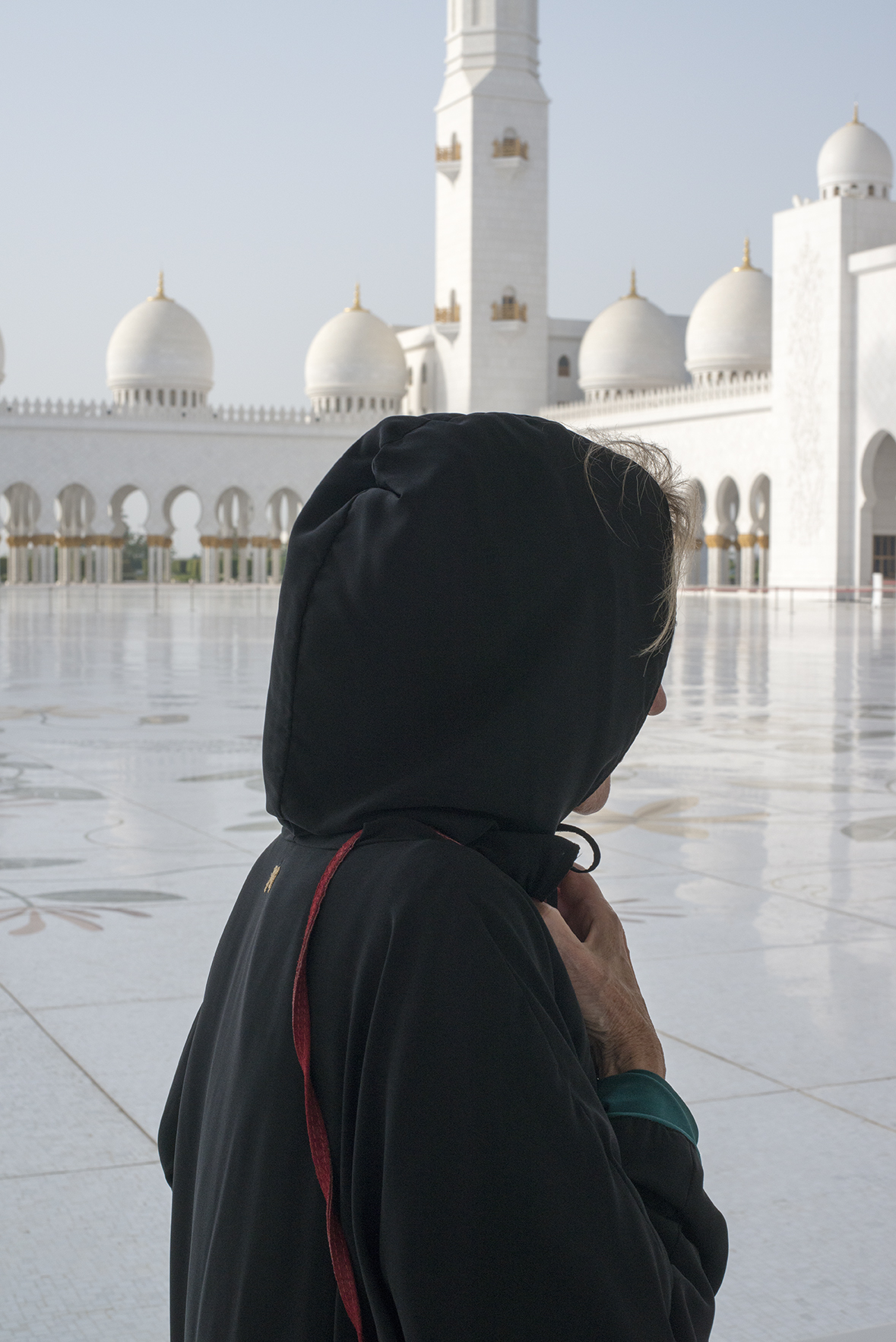 “I didn’t want to fuel the drama,” Melina continues. “Many photographs of Muslims over-dramatise or sensationalise them. I just wanted to talk with the women I photographed. I always asked their permission first, and was careful of showing respect as an outsider in their country, so that I could make a thoughtful project. I wanted to go beyond the stereotypes, to leave the subject open for interpretation.”

Although the stories of the women don’t appear in the book, those conversations informed Melina’s eye and her portrayal of Abu Dhabi society. Melina is conscious of avoiding black and white narratives, resisting falling into discussions of right and wrong. She recognises Europe is not the liberal paradise for women that many during the burkini debate have claimed it to be. “Growing up in Europe, the day comes when you realise the world is not so nice, that’s for sure,” she says. 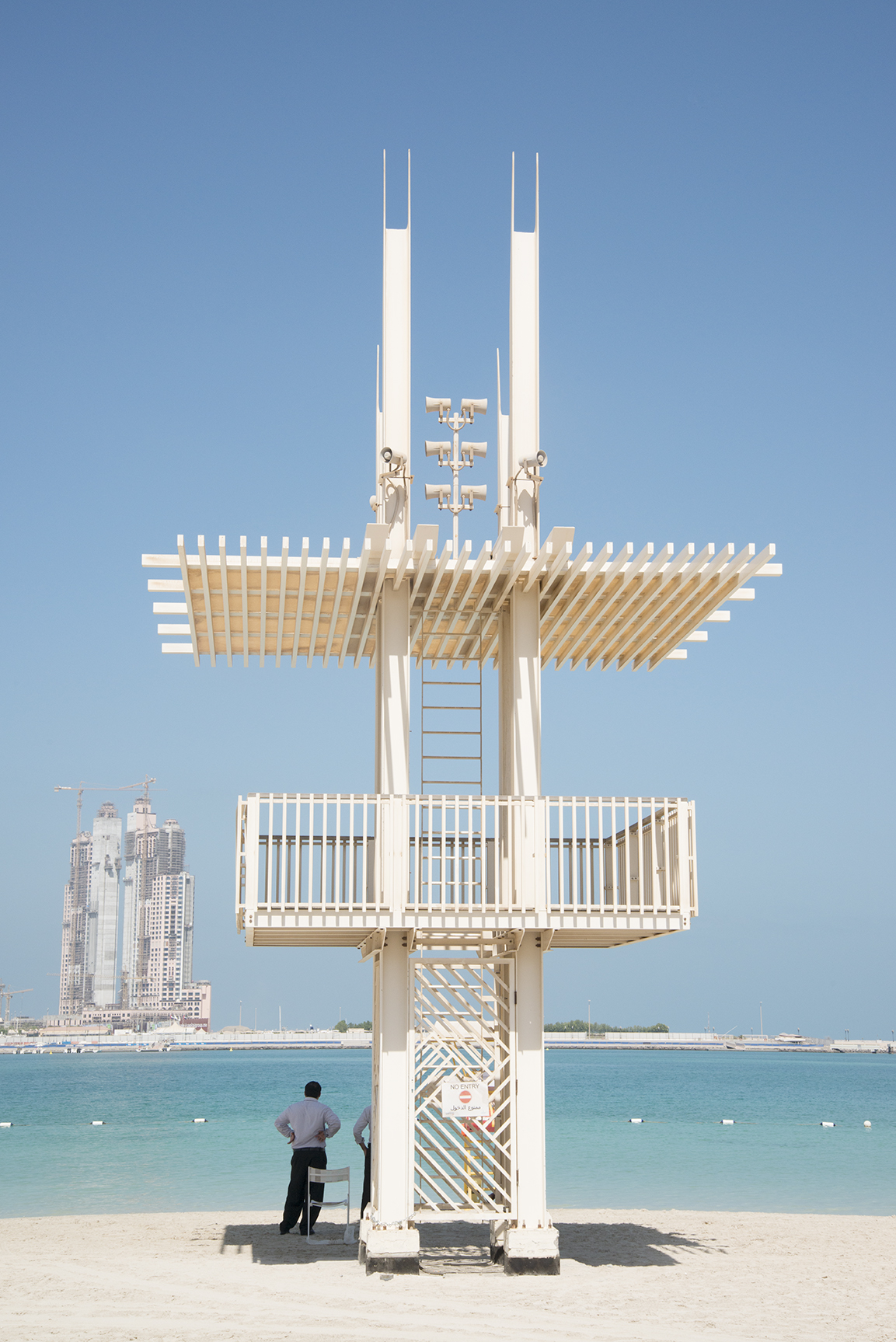 Policing of women’s bodies goes on in Europe, just as it does in the Middle East – with French police’s confrontation of burkini-wearing women this summer, an obvious example.

Melina’s up-close style focusses in on details – a wet burkini covered with sand or the colourful fabric being pulled by the water’s current – partly as a way of shutting out the wider social debates, to allow an appreciation for the objects on their own aesthetic terms. “I’m interested in photographing from near-by because I want to capture the details, the shapes, surfaces, patterns and materials,” she explains. 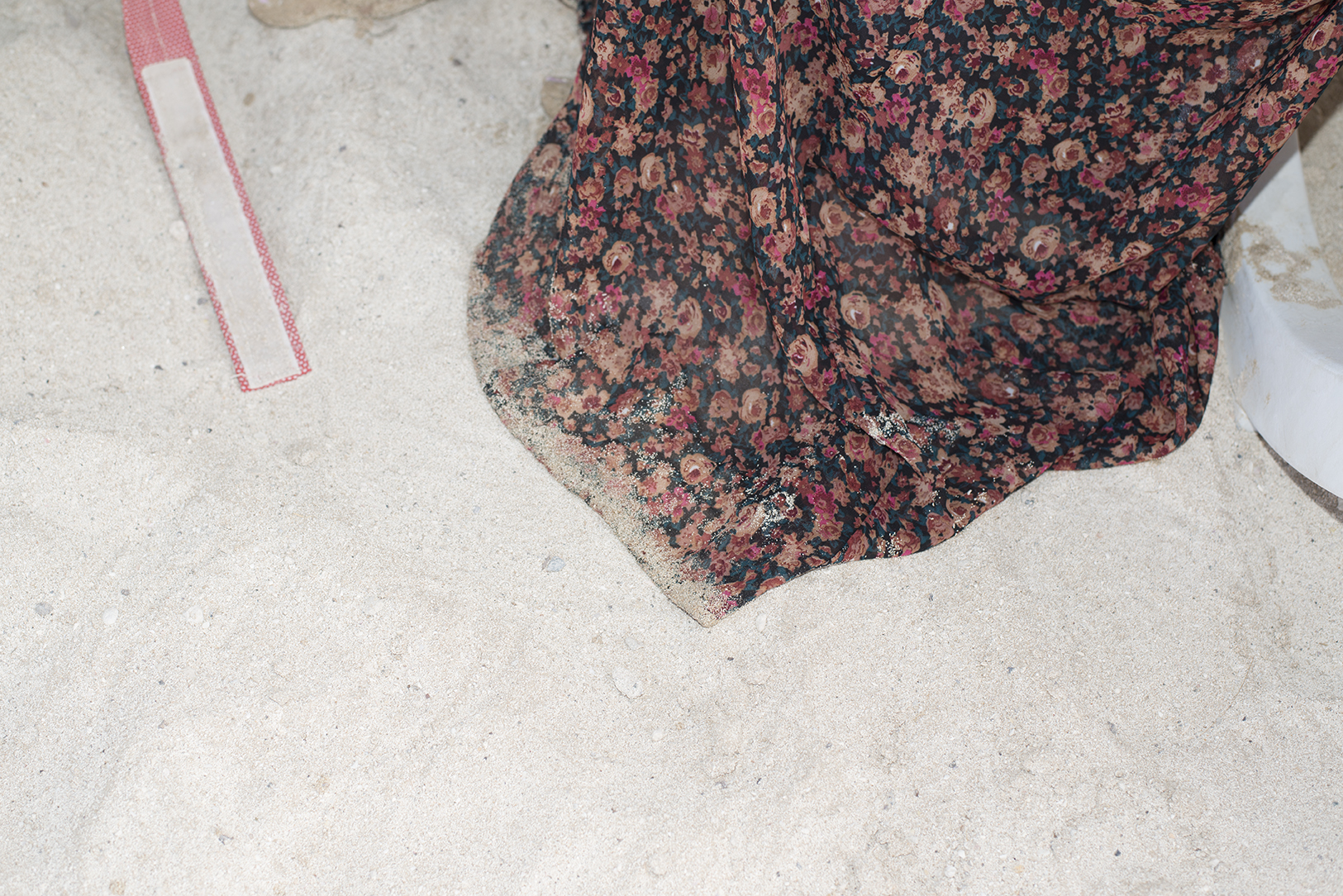 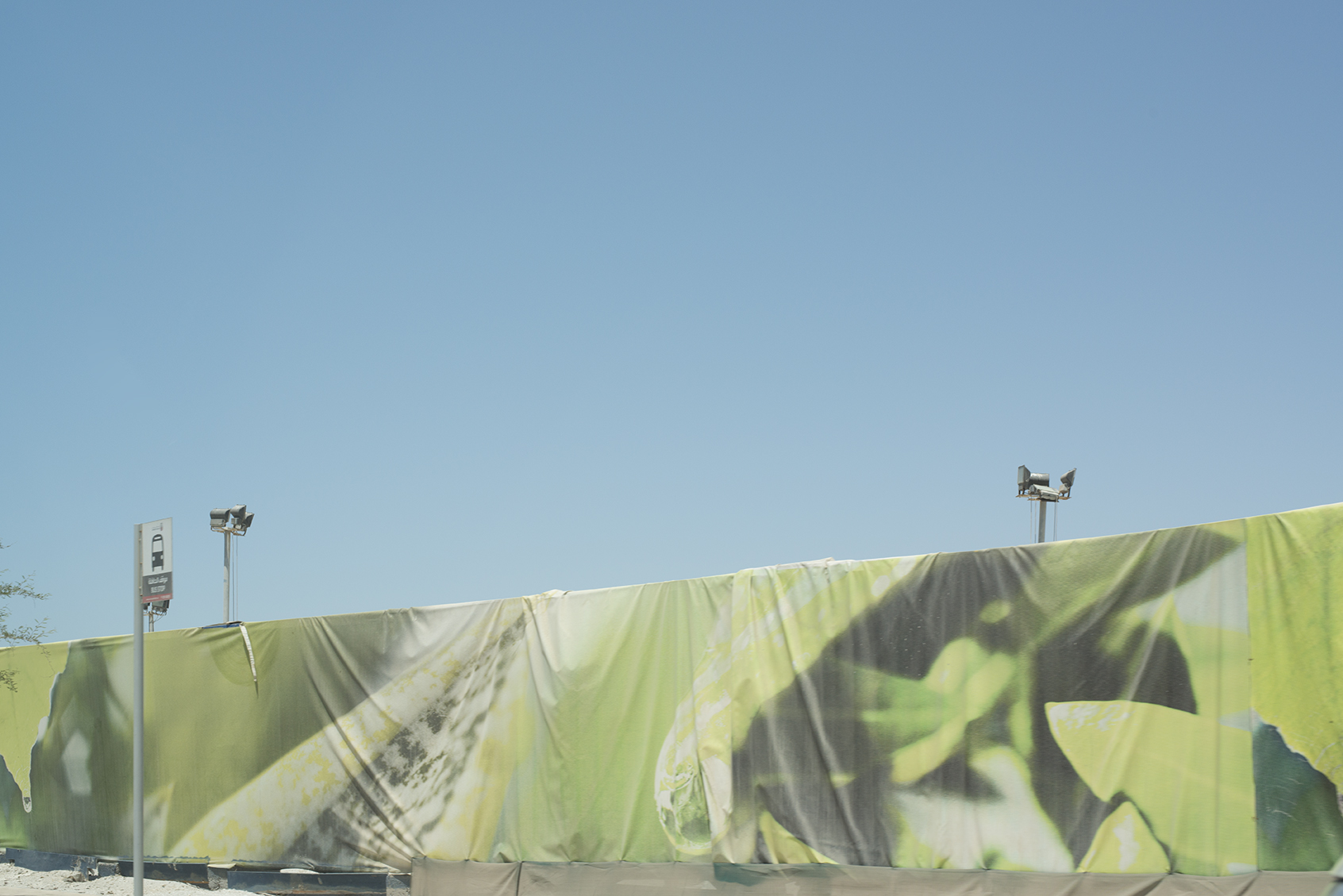 As a European, Melina noticed how differently the modern, wealthy city of Abu Dhabi has evolved, partly to deal with the heat, but also to privilege private space. The marvellous beaches are largely ignored because they’re too hot and people shuttle between one air-conditioned block and the next. It’s not just women bodies that are wrapped up in burkinis, but buildings wrapped in hoardings and people wrapped up in the protective bubbles of their cars.

This leads to a claustrophobic existence, which is emphasised through Melina’s photographic style. “I began focussing on this artificial world that everyone lives in Abu Dhabi,” she explains. “Society is all very hidden. There are far less opportunities for strangers to meet in passing. As a foreigner, you live a very separate and distant life.” 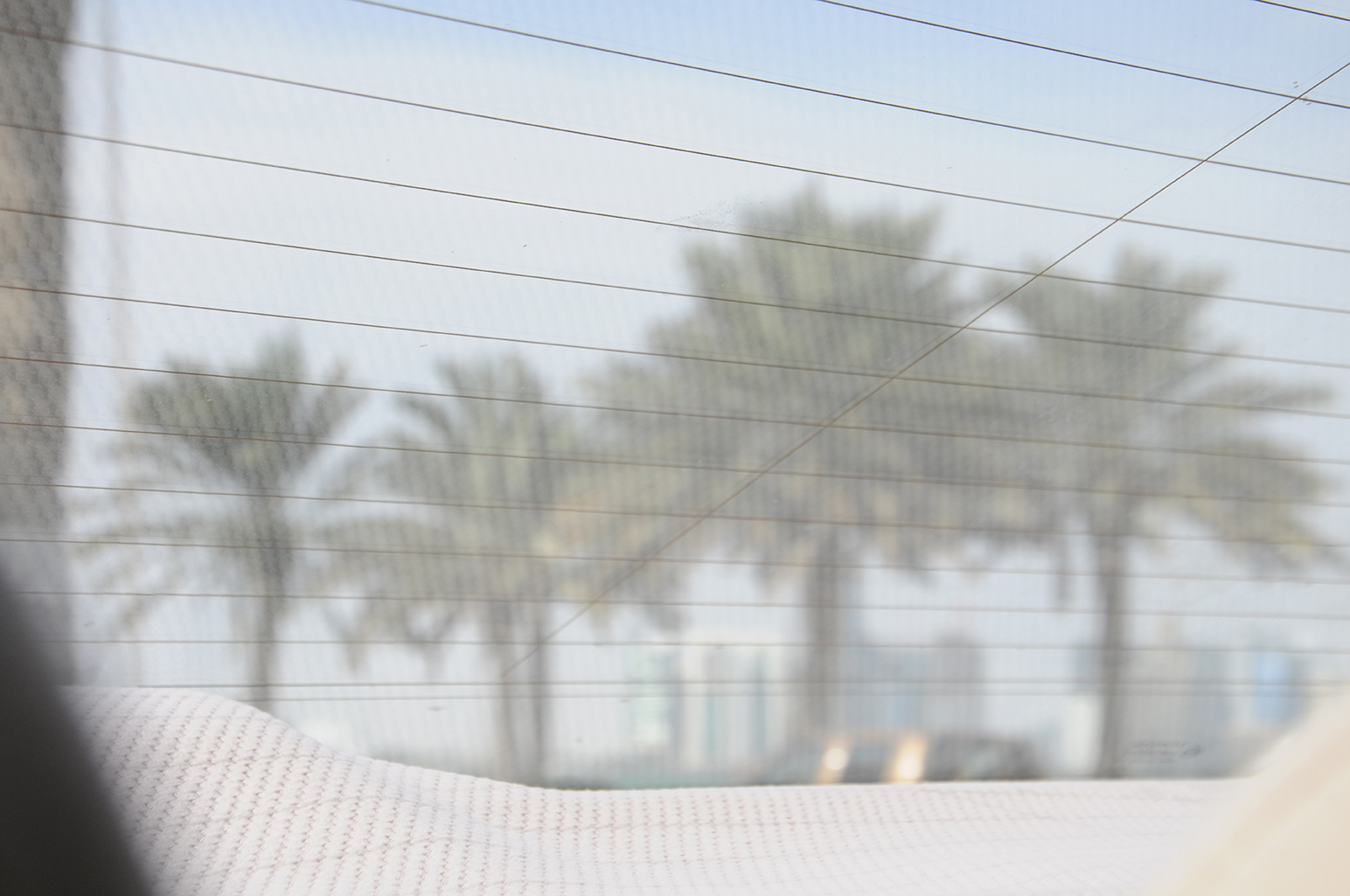 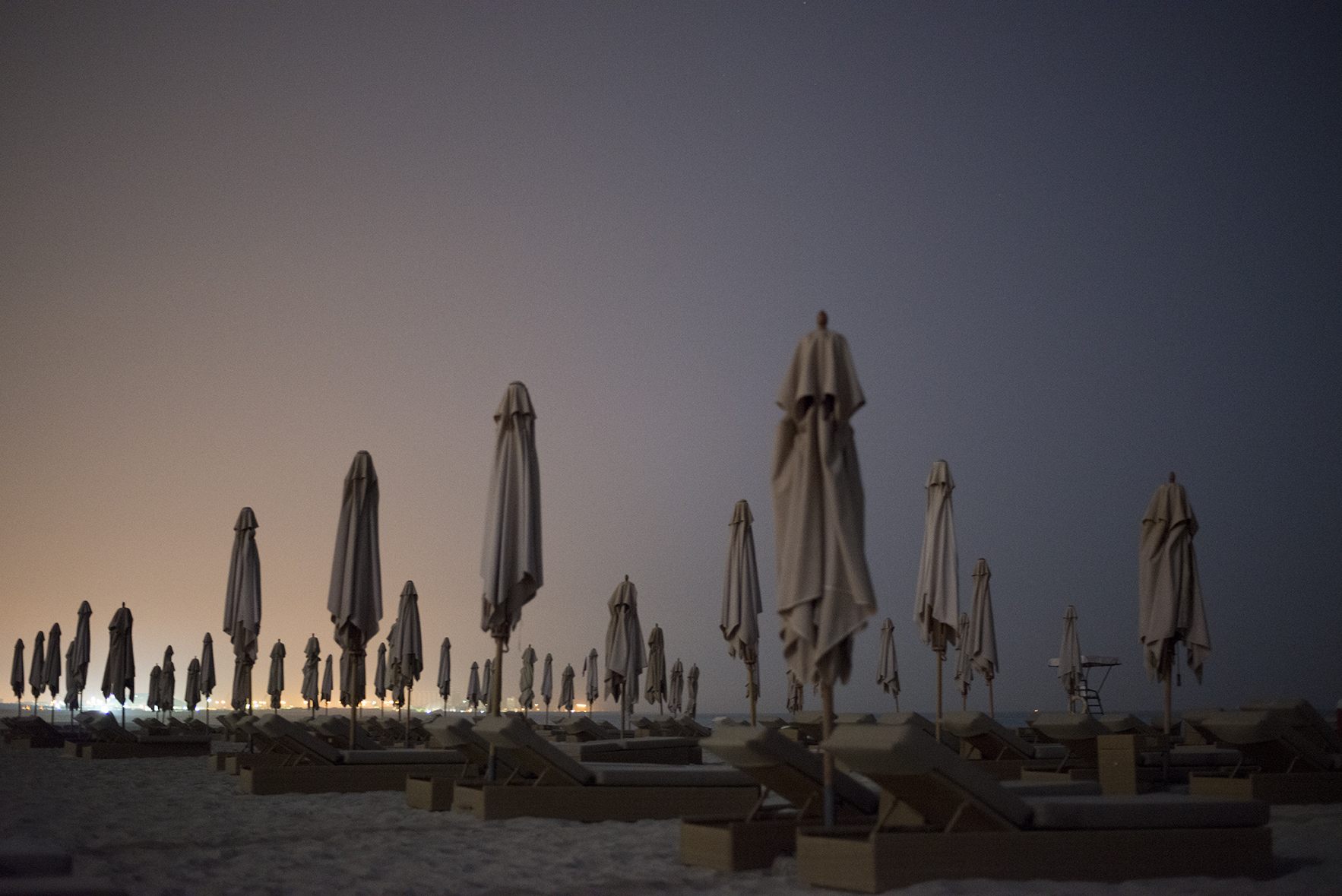 For Melina, women’s own views should dominate in any debates on acceptable dress. “In our times we need to start taking decisions for ourselves, to be free to decide whether we want to wear a burkini or any other item of clothing,” she says.

This is still yet to be achieved, in Europe, the Middle East of elsewhere. But with limitations on democracy and freedom of speech in the UAE, challenging the status quo takes courage – although Melina feels that, for women, this is beginning to change. 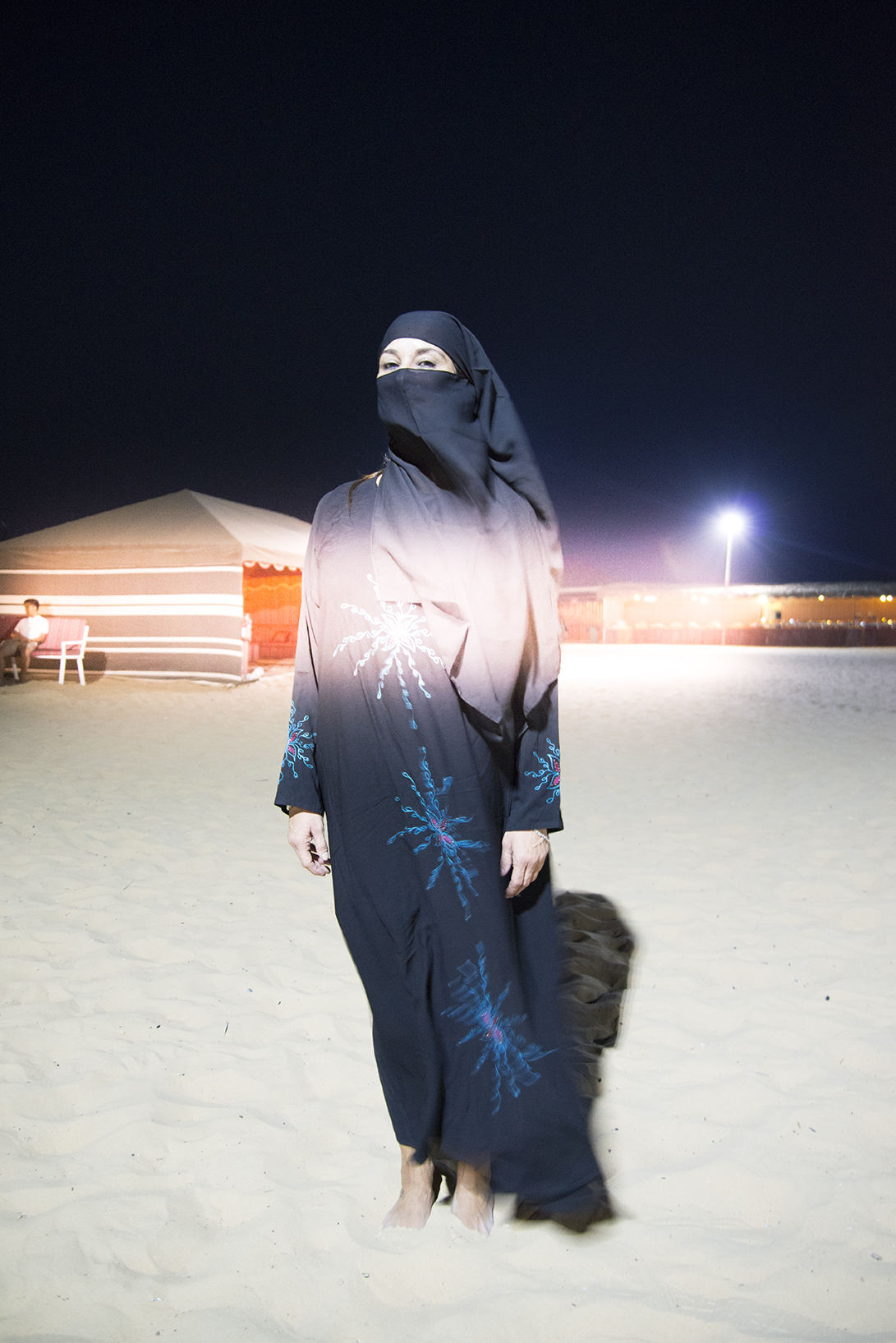 “I’m interested in supporting people to take their own decisions as individuals – which is something relatively new, but developing in Arabic countries,” she says. “I hope women continue to find their voices and stand up to wear what they want.”

Linkedin
RELATED ARTICLES
OTHER ARTICLES
The action took place in response to the 200 asylum-seeking children who were placed in hotels run by the Home Office who have gone missing.
A new film from Berghaus traces the story of Adam Raja, who left behind a turbulent upbringing to discover the healing power of climbing.
A new podcast is opening up the conversation between trans women and trans amorous men in the hope of building coalitions.
A recent High Court ruling against the right to wild camp in Dartmoor National Park sparked the largest land protest in history – and campaigners say their fight is not over yet.
Tristan O’Neill’s shots of dancers caught in moments of reverie at the height of rave’s golden age are a testament to the UK’s legendary club culture.
Since 2007, Gideon Mendel has made 20 trips to document floods in 13 countries. The result is an alarming record of what has already been lost to the climate emergency.