Art & Culture / Photography / Beneath the surface of the Mediterranean migrants crisis 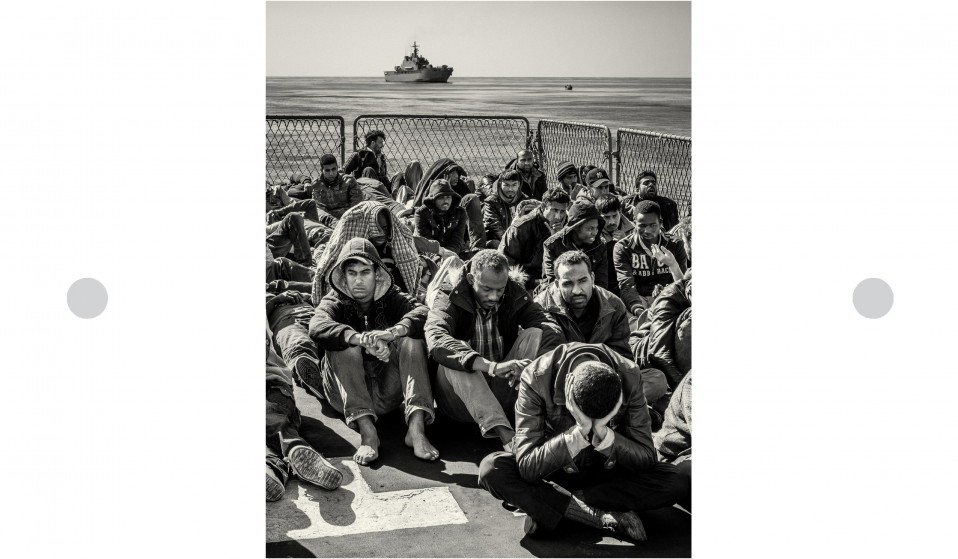 i
This group of mainly Syrian migrants has just been rescued by Italian Navy frigate Grecale somewhere between Lampedusa and Libya. They will be taken to a Temporary Migrants Centre in Mineo, Sicily. – Mediterranean Sea. 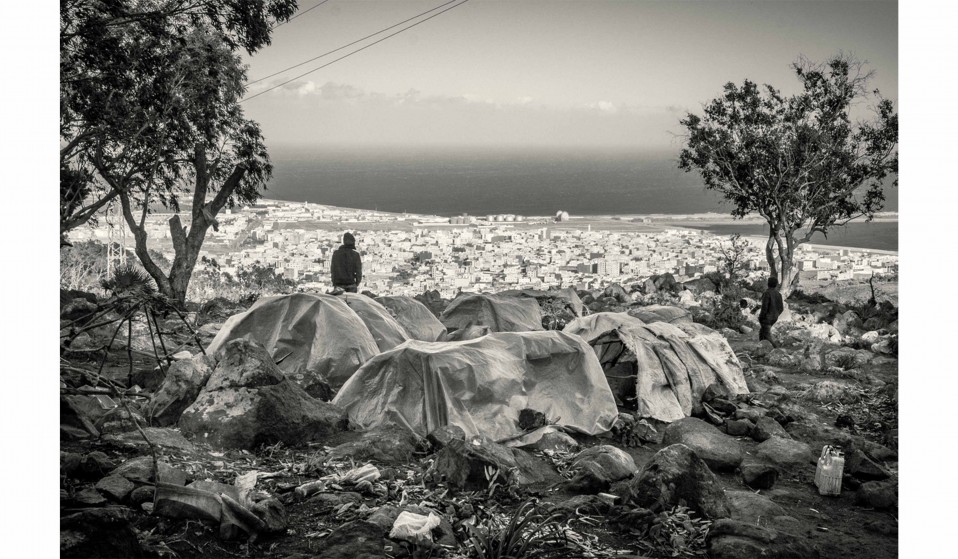 i
A migrant looks over the Mediterranean Sea and city of Nador from a makeshift camp where migrants, mostly men from Sub-Saharan Africa wait to enter Melilla, a Spanish enclave where they can claim asylum. – Mount Gurugu, Morocco. 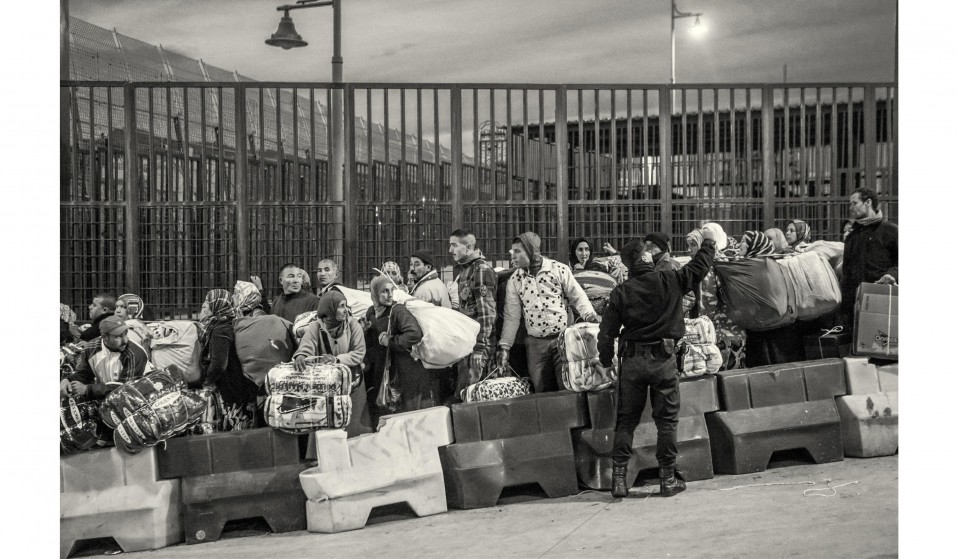 i
housands of Moroccans from Nador travel into Melilla, Spain, with special passports that allow them to work. It is legal to return with anything they can carry. Here a Spanish policeman observes returning Moroccans. – Melilla, Spain. 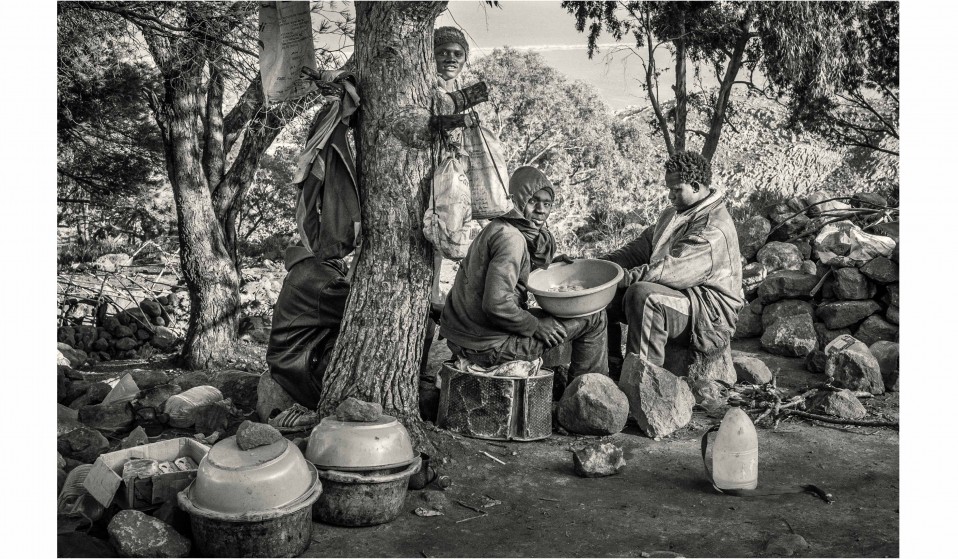 i
Migrants from Mali and elsewhere camp here for months or years waiting to jump the fence to enter Melilla. Living conditions are harsh, since Morocco prevented Médecins Sans Frontières from operating in the area. – Mount Gurugu, Morocco. 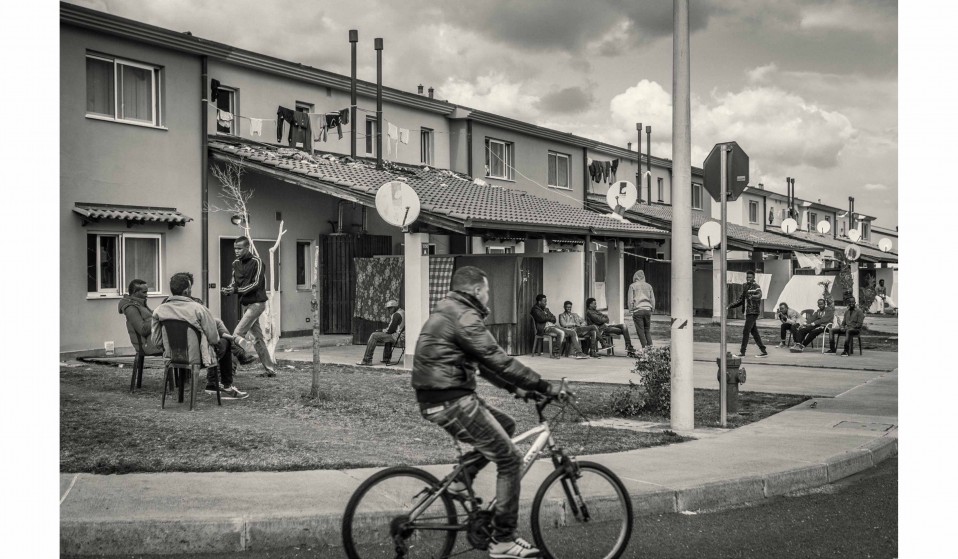 i
Mineo Asylum Seekers Welcoming Centre is the largest of its kind in Europe. Adapted to shelter 2,000 migrants in 2011, it formerly housed US military families. Now 4,000 people await acceptance into Europe or deportation. – Mineo, Sicily. 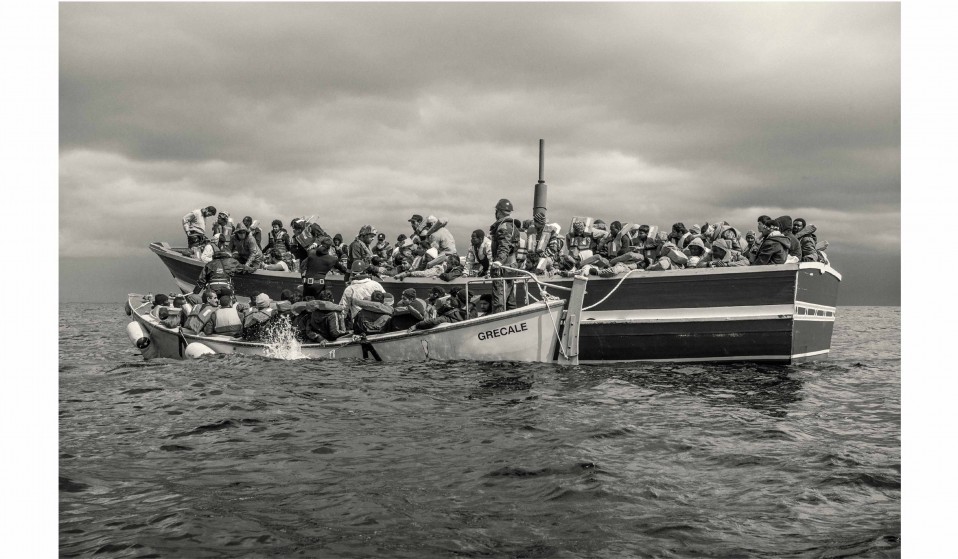 i
Italian sailors transfer 219 migrants to another navy ship. When they left Libya the night before, smugglers gave them a satellite phone to arrange their rescue with Italian authorities once within international waters. – South of Lampedusa, Italy. 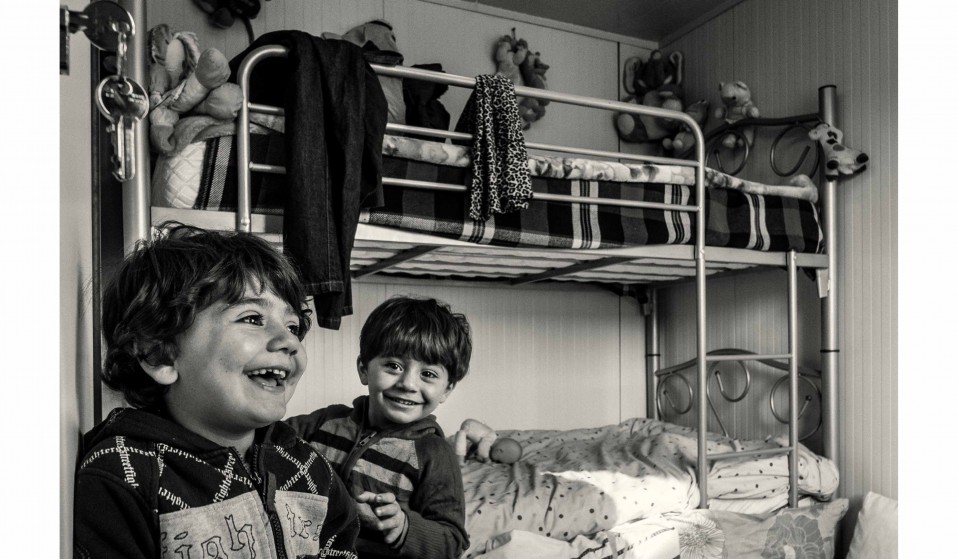 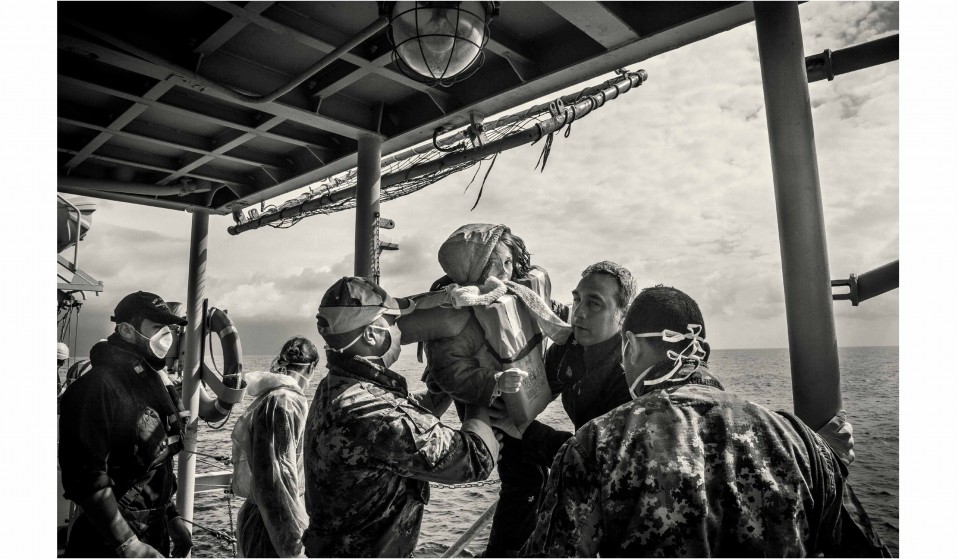 i
Sailors bring a young Syrian girl onboard the Italian Navy frigate Grecale. The Grecale is part of operation Mare Nostrum, looking for migrant boats making the hazardous crossing from Libya. – South of Lampedusa, Italy. 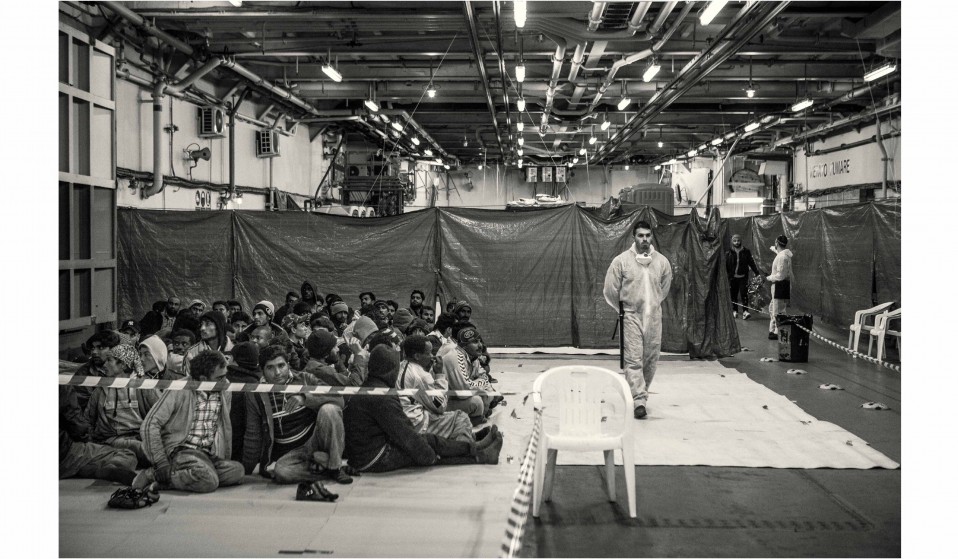 i
Migrants are processed aboard Italian Navy vessel San Giusto before being taken to a reception centre in Sicily then accepted as asylum seekers or sent back to their country of origin. – South of Lampedusa, Italy.

Carlos Spottorno goes beyond the border to capture a picture of immigration few people choose to see.

Carlos Spottorno goes beyond the border to capture a picture of immigration few people choose to see.

They come from Morocco, Mali, Yemen and Cote d’Ivoire; from Syria, Afghanistan and Iraq. Tens of thousands of people are on the move at any given time, trying desperately to get into Europe – on rafts, on foot and tucked away in lorries. They leave their home countries because poverty, war and hunger have made their lives intolerable and they’re determined to find a better life.

Immigration in Europe has become a divisive issue. When it comes to EU immigration policy, the member states are somewhat schizophrenic. Those at the heart of the club – like France, Britain, Germany, the Netherlands – are the most popular destinations for migrants. Yet these countries contribute little in terms of the actual dirty work, with border security left to peripheral countries, like Italy, Spain, Greece and Bulgaria. They are the guardians of Fortress Europe.

This project was triggered by my interest in geopolitics and how power shifts between nations over time. But because we live history minute by minute, it’s hard to condense what is happening. My goal was to capture a broader picture, to explore a complex issue rather than take a stance. The bedrock of this project is the construction of the European Union, and what the EU may look like in five, ten, 100 years from now. But at the heart of this story are people.

One place that really impacted me was a refugee camp in the woods in Morocco. It’s a really bad situation. People live in the middle of nowhere – no drinking water, food or medicine – in really harsh conditions. Many come from Sub-Saharan Africa and have been there for years. They’ve spent everything they have and risked their lives, but this misery is only part of their journey. They still have to jump an enormous fence into Melilla in Spain.

The deepest impact came later, though, during a high-sea rescue operation off the Italian coast. You are in this warship, a safe place, and suddenly you see a small dot on the horizon. As you get closer that dot becomes a boat of 200 people who will likely drown if they aren’t rescued. Seeing that firsthand, you’re suddenly hit by what it really means to be lost at sea. You understand what this journey means. These people jump into a boat in Libya in the middle of the night, having lived in a cramped apartment for weeks. Human trafficking is big business. Each boat holds 200 people; each

I also focused on people patrolling the border, because they have a problem too. The EU has been struggling in the last decade and there are some decisions they have to take. First, we need to distinguish between immigration and refugees. That’s absolutely necessary. A person who comes more or less voluntarily to Europe is very different to someone who is running away from war. Europe needs to welcome anyone who is running away from misery, starvation or death. But some people are not happy to welcome them in, and anti-immigration groups, like Germany’s PEGIDA, are on the up.

It may not be constructive to ask people to change their nature. It’s not smart for locals to ask newcomers to change their ways, or for authorities to ask locals to change all their non- religious values. But we are all missing the point. The point is not only whether or not more or less people should come to Europe, and how to deal with integration. The point is that we must attack the roots of the problem. And that means acting against colonial economies. It means stopping helping dictators, and closing tax havens. Political colonialism may have ended, but economic colonialism is harsher than nineteenth century colonialism ever was.

And yet there is no one talking seriously about this. The colonial economy is related to the banking system, and the banking system is what allows you and I to buy a house. So even from an individual point of view, the whole system is intertwined. But intergovernmental institutions were created to solve problems that individuals cannot solve by themselves, so we should use these institutions to provoke political change.

Now, why are the media not doing that? I have no idea. Instead, they distract us with debates: ‘Should we accept one million or two million immigrants?’ But that is not the issue, because unless we establish a fair global economy, that is never going to change. It doesn’t matter how long or big the fences are; people will always be willing to go to a safer place. They will always choose to jump.

Linkedin
RELATED ARTICLES
OTHER ARTICLES
Photographer Becky Tyrell went down to the fading banger and stock raceway to meet a community desperate to keep it alive.
Social prescribing connects people with non-medical support to improve their health and wellbeing – but some experts worry it’s just a stick plaster solution.
A new law change is enabling Britain’s donor-conceived children to know the truth about their origins – but campaigners say the fertility industry must do more to protect people.
Tristan O’Neill’s shots of dancers caught in moments of reverie at the height of rave’s golden age are a testament to the UK’s legendary club culture.
Filmmaker Laura Poitras discusses her new documentary which traces the remarkable life of the artist-activist and the impact of her battle against the US opioid crisis.
As she gears up for the release of her first book, the 24-year-old climate activist talks standing up to authority and building a more inclusive movement.