Art & Culture / Photography / In Pictures: Looking back at the Arab Spring five years on 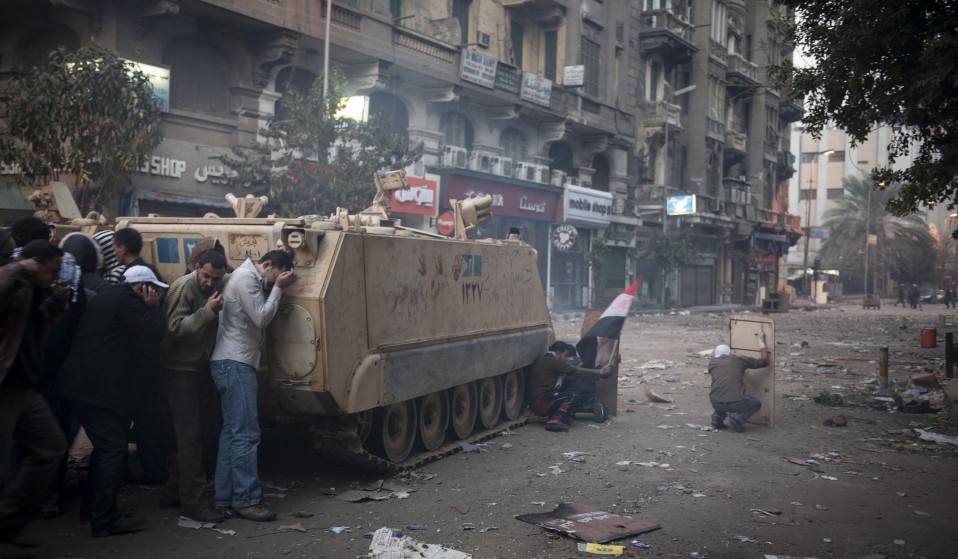 On the 5th anniversary of protests in Egypt’s capital, we asked Huck photographers look back on the spirit of the Arab Spring and share the stills they remember most.

On the fifth anniversary of protests in Egypt’s capital, we asked Huck photographers Guy Martin, Pauline Beugnies, Lindsay Mackenzie and Monique Jaques about the stills they remember most.

January 25, 2011, protests broke out in Cairo’s Tahrir Square. They had already spread throughout Tunisia and Algeria the month before – and January would mark the beginning of protests across the Arab world, springing it into a long and violent period of upheaval which more or less continues to this day.

Tahrir Square is iconic of the Arab Spring – an epicentre for major demonstrations, occupied on and off by protesters, the site of beatings at the hand of security forces and in the constant gaze of news stations as Egypt transitioned from dictatorship, to democracy, and back to dictatorship again.

On the 5th anniversy of the demonstrations, we asked Huck photographers who had been at the Cairo protests to tell us about the photograph they had taken which best captured the spirit of the Arab Spring

“I took this picture on 26 January, 2011, the day after protests swept through the centre of Cairo. They were calling for – amongst other things – the end of President Hosni Mubarak’s rule. As we now know, the spirit and movement of those days was brutally crushed. But in those early halcyon moments of late January the feeling on the streets of Cairo was, I think, cautious euphoria. People didn’t quite know what the next stages of a ‘revolution’ were supposed to look like. How were they supposed to behave? Who was their leader? How do you go about getting the president of your country to stand down? What on earth is the next step?

“This picture was taken on a street around Tahrir Square. The bits of paper in the air are lyrics and slogans to songs and chants for people to sing: the revolution was so new that they didn’t even know what to sing – so the people in the apartments above were throwing down instructions on what to do. I think it gives just a little insight into how freedom of expression, the idea of protesting and freedom of thought were brutally put down for so long in Egypt, and then there is this beautiful moment of people grabbing this new movement and idea of protest. Sure there were more ‘iconic’ moments in the battle for Hosni Mubarak to step down – camel charges, stone throwing and the sheer mass of people in Tahrir Square. But for me, this small moment at the dawn of a revolution is the one that sticks with me the most. I think it’s a hopeful image. And that’s what January, five years ago was all about. Hope for a better future.” 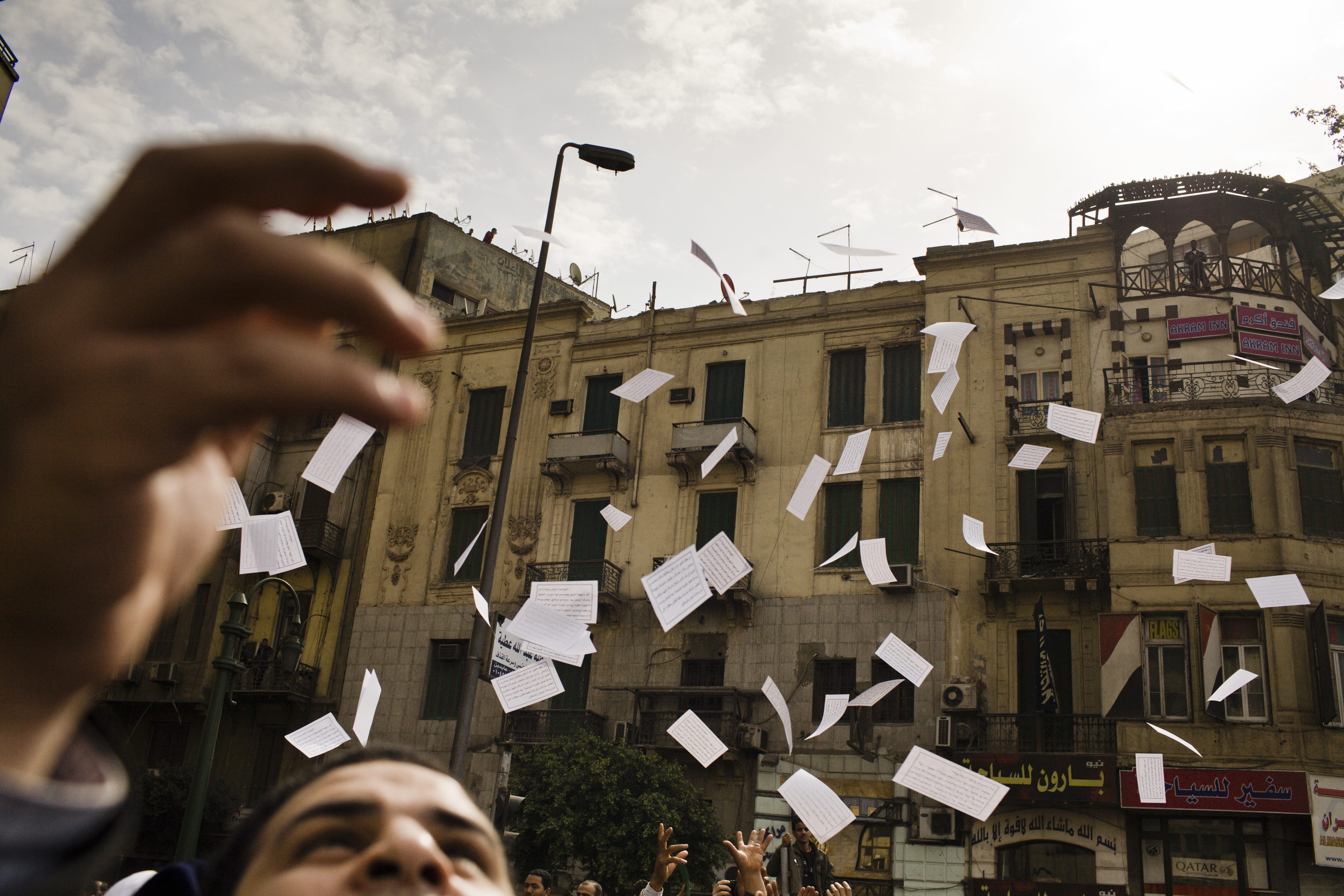 “‘4 February 2015. Ahmed was sentenced to life in prison…’ I do not understand. I read the article several times. He was sentenced with 229 others for … a demonstration! Accused of “illegal gathering,” “incitement to violence” and of “carrying weapons illegally” in the clashes with the police in front the Ministers council in December 2011. It is absurd but it doesn’t seem to move a lot of people in Europe. I remember Ahmed, seen in the picture, on January 25, 2011, marching to Tahrir Square unbelieving they made it. ‘But why did the police let us go so easily?’ He wondered. It did not last. Ahmed was arrested and sentenced for the first time in 2013. In May 2014, Ahmed was hospitalized, severely weakened by a long hunger strike. But I knew he would pull through. But life in prison? I do not understand. What threat can he represent for this authoritarian military state?” (Translated by Beugnies from her book Generation Tahrir) 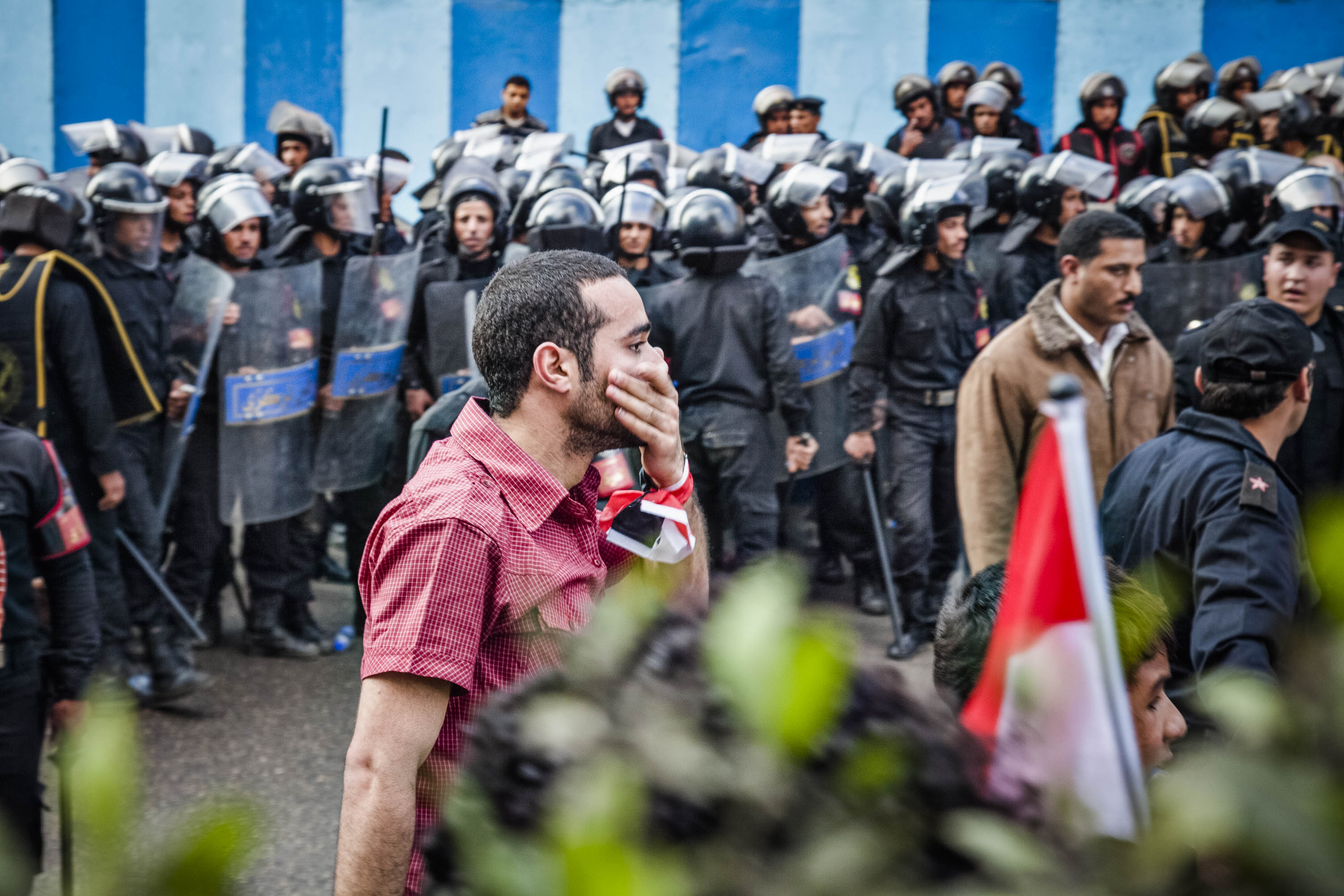 “One afternoon during the initial protests in Tahrir Square everyone started jumping up and down and cheering and shouting that Mubarak had stepped down. I started taking photos – all blurry with the excitement of the moment. After a few minutes, it turned out that it was a rumour. The energy dissipated.

“It would be another week before Mubarak fell. I didn’t publish this image at that time in photo sets about the Revolution because it was confusing and inaccurate – it looked like an image of people celebrating the fall of Mubarak, but it wasn’t – it was people celebrating something that turned out to be untrue. Now when I look back, perhaps it’s the most accurate image I have of the Arab Spring. It was a false alarm. Everything was a false alarm. But the joy was real.” 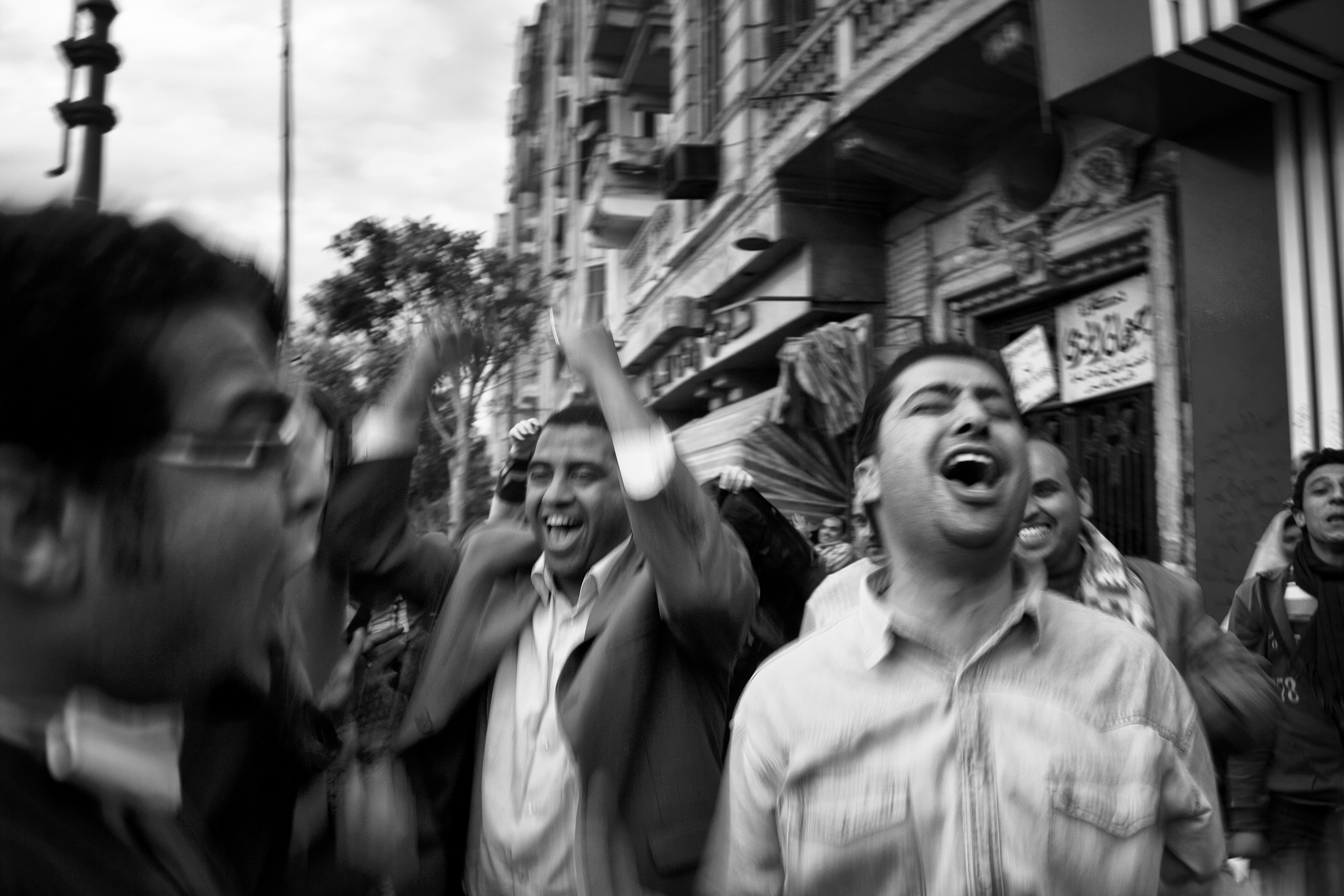 “No one knew what was going to happen with the revolution, but everyone in Tahrir Square knew it had to happen. I never saw anything as powerful as what was going on in those days before President Hosni Mubarak fell.

I was 25 at the time, any my only other experience was covering Afghanistan, a country so crippled and exhausted from the 2008 surge that a revolution would be impossible. I was living in Istanbul at the time and boarded a flight to Cairo the second night of the clashes. I didn’t think it would last long and didn’t pack much, only enough for about two days. I was wrong.

“On the street it felt as if people were ready to pay for the change they wanted with blood and tears. Men returning from the frontlines stamped handprints of blood on the police APC’s as they fell back in defeat. When they started carrying out bodies of those wounded or dead it was clear that Egypt would never be the same.

“In the alley outside the mosque they were using to treat the wounded a man came up to me and asked, ‘Why are they doing this to us?” I said I didn’t know. And like him I didn’t know what would happen next- that Mubarak would fall, President Morsi would be elected and later removed, and the country would spiral down leaving those who sacrificed so much with nothing but hope for better.” 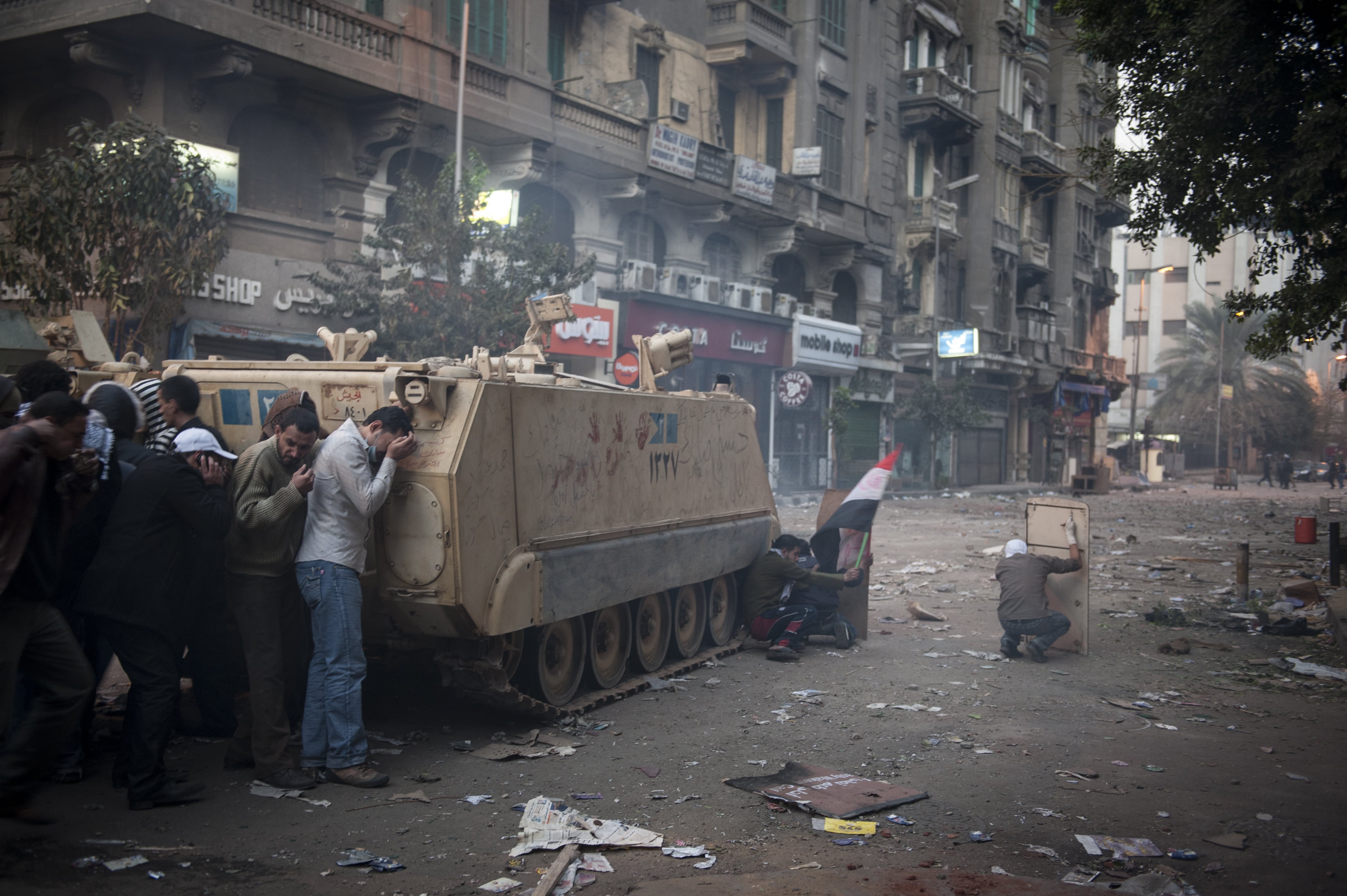 Linkedin
RELATED ARTICLES
OTHER ARTICLES
As Ukraine erupted in conflict, Brendan Hoffman jumped on the next flight – confronting his own shattered reality in the process.
Whether it's Sisters Uncut or the photographers turning acts of domestic violence into inspirational art, activists are discovering innovative means to promote social change.
Metal music culture represents much of what ISIS hate. It's also kind of similar. An academic shares some thoughts on the new countercultures of the Middle East.
As the media sets its sights on Tunisia once again for the country’s first democratic presidential election, Lindsay’s Mackenzie’s Instagram project reveals snapshots of the everyday lives sidelined by the explosive coverage of the region.
A wry take on life in Beirut into hard-edged comics and bomb-fuelled jazz.
Protest music is shifting shape in Egypt, as artists and bands from all walks of life challenge power and prejudice.