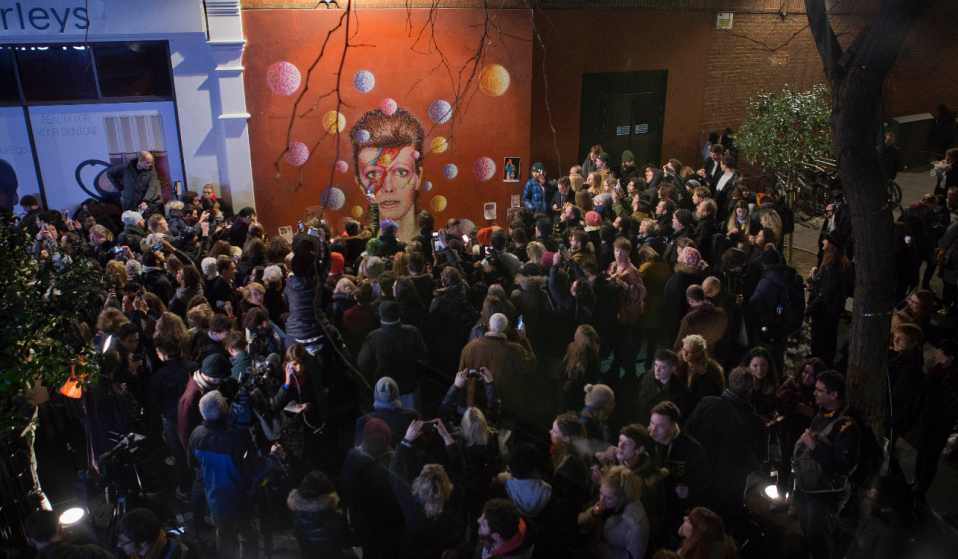 Fans from all over London gather in Brixton to celebrate the borough's most famous export, David Bowie, who died Sunday January 10.

Fans from all over London gather in Brixton to celebrate the borough's most famous export, David Bowie, who died Sunday January 10.

“Any time I get sad, start to feel lonely or afraid, I just scream, ‘I’m an alligator.’ That’s my mantra. That’s how much he means to me,” giggles 43-year old Lynette as she clutches a handful of flowers between the crush of bodies gathered outside Brixton’s Roxy cinema.

As we move through the heaving crowds gathered around David Bowie’s Brixton birthplace, slurred lyrics crash and wobble from every direction. Some people lay flowers silently outside the giant Aladdin Sane mural – the top of the red lighting bolt, sky-wide eyes and single dilated pupil the only part still visible over the sea of heads.

Away from the crowd, a circle of kids thrash and stumble through renditions of ‘Queen Bitch’ and ‘Suffragette City’ as a young man with an acoustic guitar wrangles the crowd into a sing-along, booze spilling out of bottles everywhere. Other people stand together in small, private groups with family members, recounting the moment Ziggy came smashing into their lives. 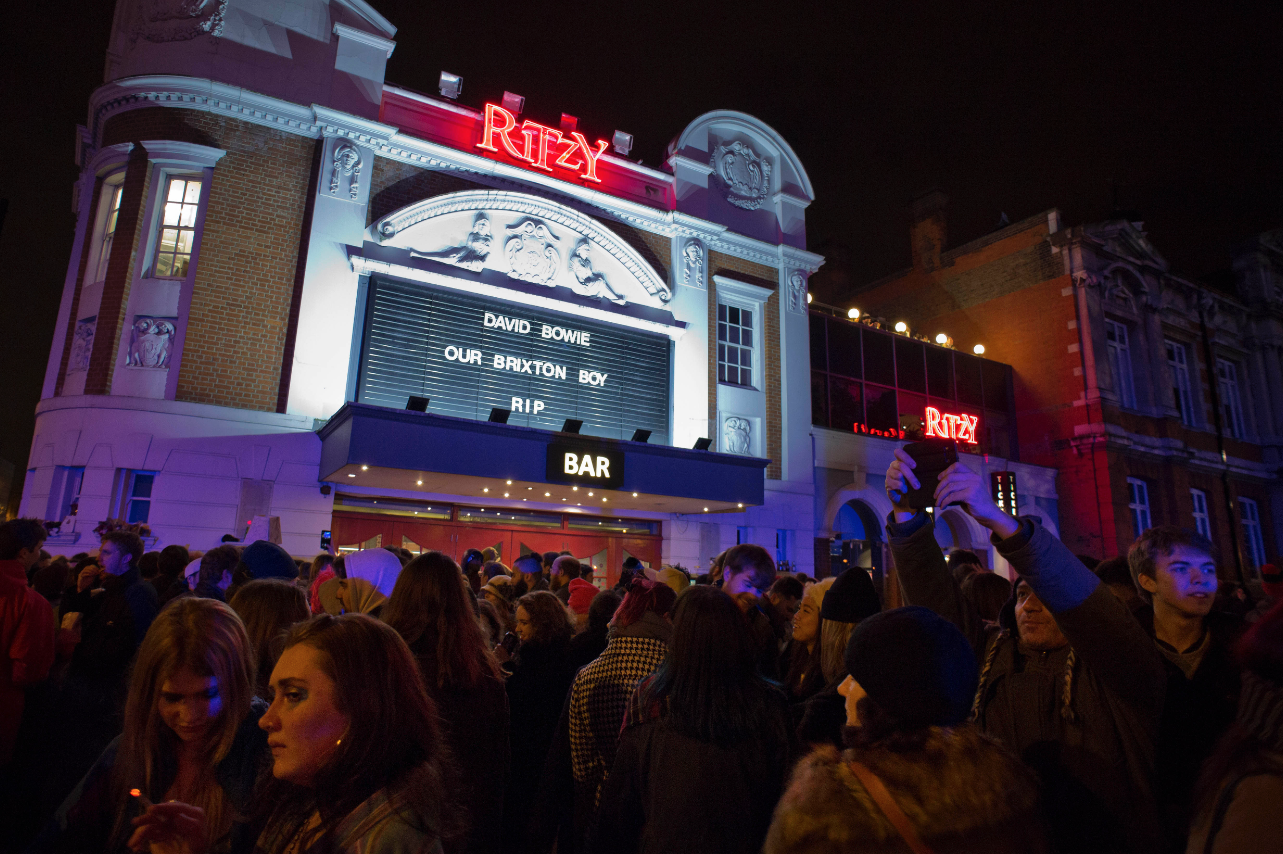 “The first Bowie song I heard was ‘Space Oddity’ when I was seven. Ever since then I’ve been terrified of space. Terrified of the idea of sailing away from everything and everyone you love. But Bowie was never afraid to sail into the unknown, was he?” Says 34-year old Jude as she cradles a glass of red wine.

On Sunday January 10, David Bowie passed away after a silent 18-month battle with cancer, just three days after the release of his 25th and final studio album. But one thing you instantly notice standing here in Brixton on a Monday night is the lack of sadness among the crowds. It feels like a national holiday – like the whole of London’s just been given the day off. However important Ziggy was, people are to celebrate his life, not mourn his death. 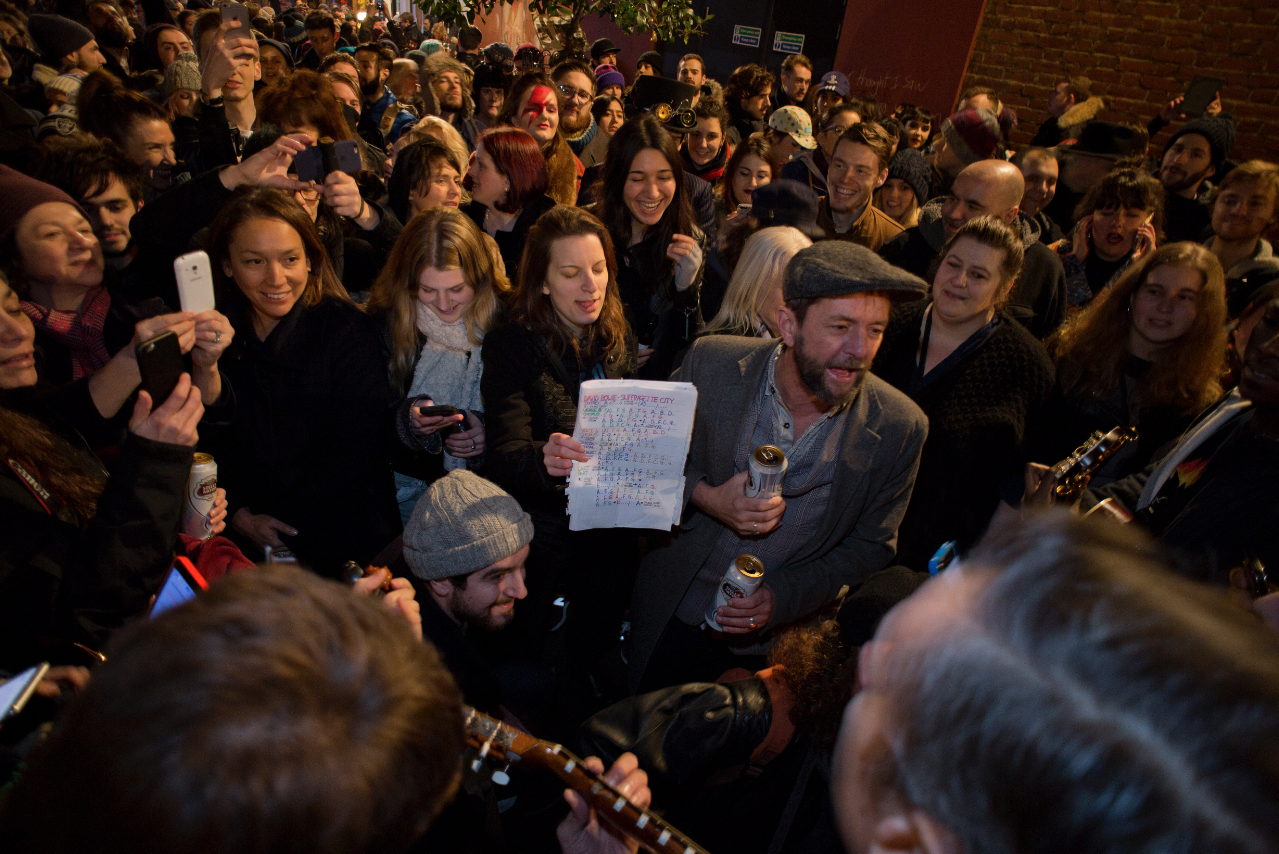 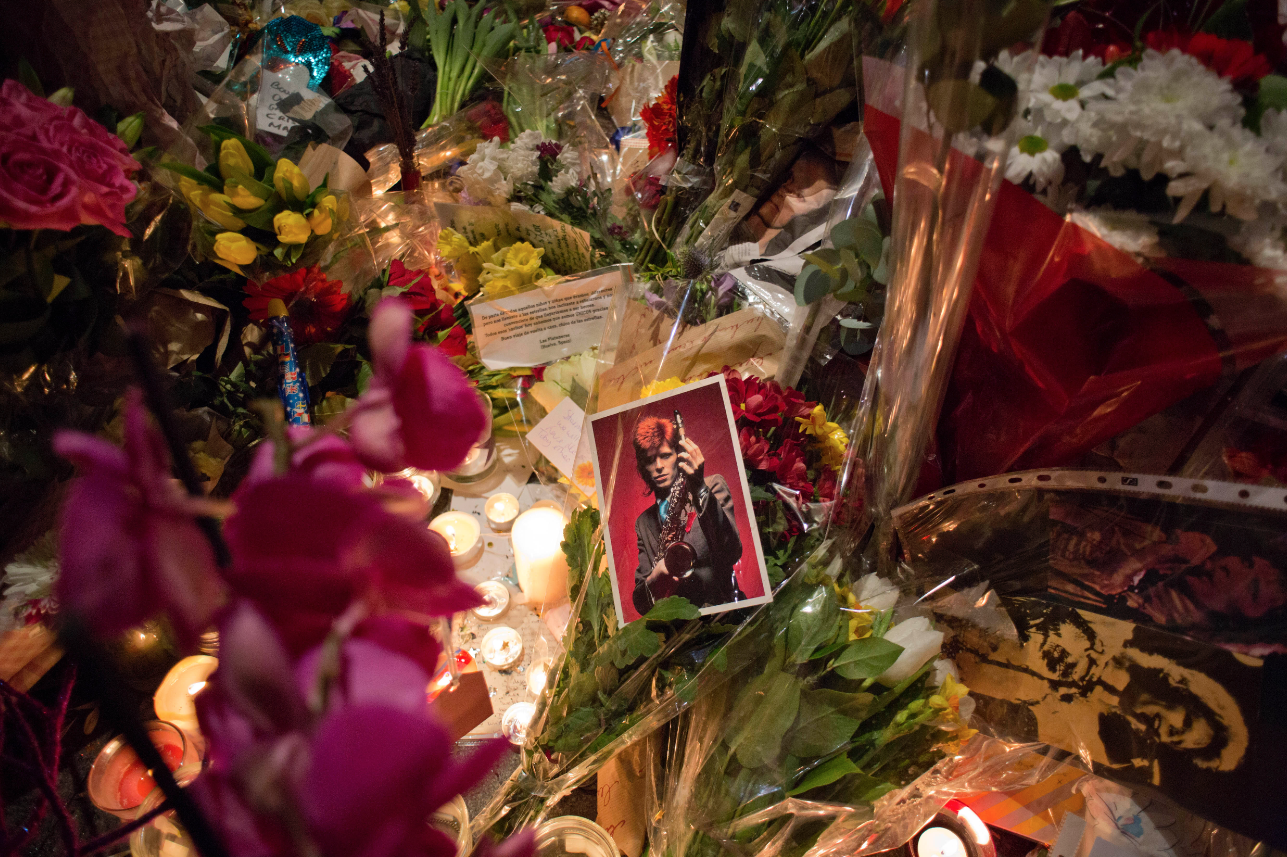 Wonky red lighting bolts drawn in lipstick and eyeliner appear on face after face. A woman wrestles through an opening in the crowd with, ‘We could be heroes,’ scrawled in freshly painted Tippex on her denim jacket. A young man slithers up and down the street in a pair of black heels, a gold choker and electric blue eyeshadow.

“I can’t pick my Bowie moment. There’s too may,” says 26-year old Ed, shivering slightly in his lace top. “I’m just one tiny facet of what he’s helped people through. He helped me come to terms with myself and what I wanted to be. I guess a good artist can communicate with so many different people in so many different ways, and each of them extremely personal. I’m only young and I wasn’t there at the beginning but when I first saw him I thought ‘Oh my God, I wanna be like this guy.’”

Next to him, two burly young men with beards and sweat-smeared lightning bolts stand drinking cans of beer with their mother Sharon, dressed head to toe in white fur. She shakes her head fondly, smiling a deep inner smile as she recounts her first memory to me. 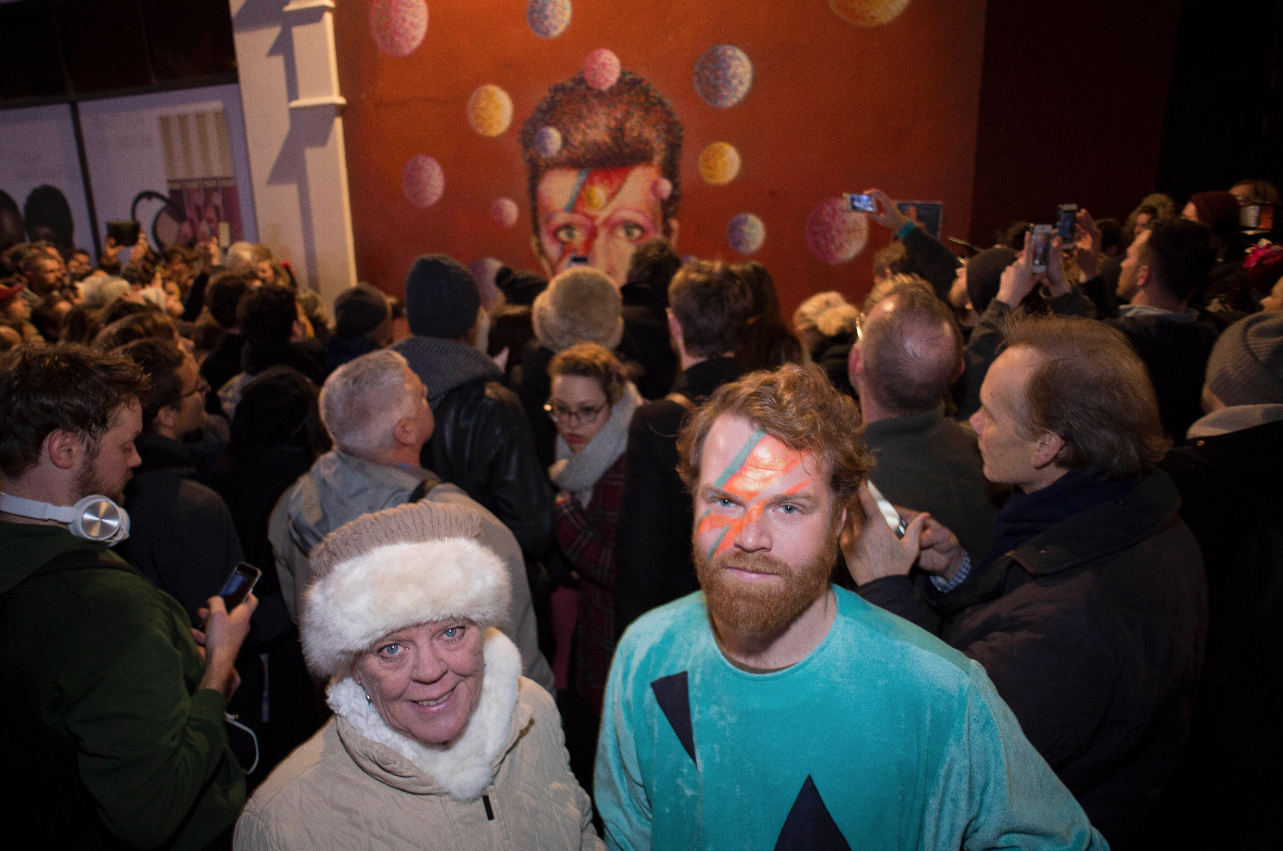 “It was 1973. I saw him at the Hammersmith Apollo. You know… that gig. We didn’t know it was such a big deal because he didn’t announce Ziggy’s retirement until right at the end of the concert. I was only 13 years old. I’d lied to my mother because she didn’t want me to go see this strange man in makeup. Then right at the end he poleaxed us all and broke up the band right there,” she says in a thick Cockney accent.

One of the most amazing things about the crowds gathered here is the mix of generations. It’s a rare thing: a rock star your parents listened to forming such a pivotal point in your own youth. And I think that’s why nobody seems to be sad. No one’s really upset because he’s always remain a deep fixture in the lives of many, forming not just a deeply personal connection, but a family one, too. And of course, it’s not just his lyrics and melodies that burned an indelible impression into many young hearts.

“Bowie shaped my formative years in many ways,” explains 51-year old Mark. “When I was eight years old I saw ‘Starman’ on Tops of the Pops. And that moment when Bowie put his arm around Mick Ronson, the seed in me that I’d struggled with since my youngest years just bloomed. I realised I was gay. And more than that, that it was ok and I didn’t need to be scared. And a lot of people will remember that moment just like I did. A gesture so small, but so, so massive for so many.”

And as we move down Coldharbour Lane, the street party gets busier. People spill across the streets and roads; my photographer takes a bright red glitter bomb over his face and camera. Everywhere you look there’s a sea of DIY Ziggys, Aladdins, Thin White Dukes. Everyone dressed in a hotchpotch raid-your-mother’s-cupboard attempt at glam that you imagine was no different back when people saw Ziggy play for the first time. 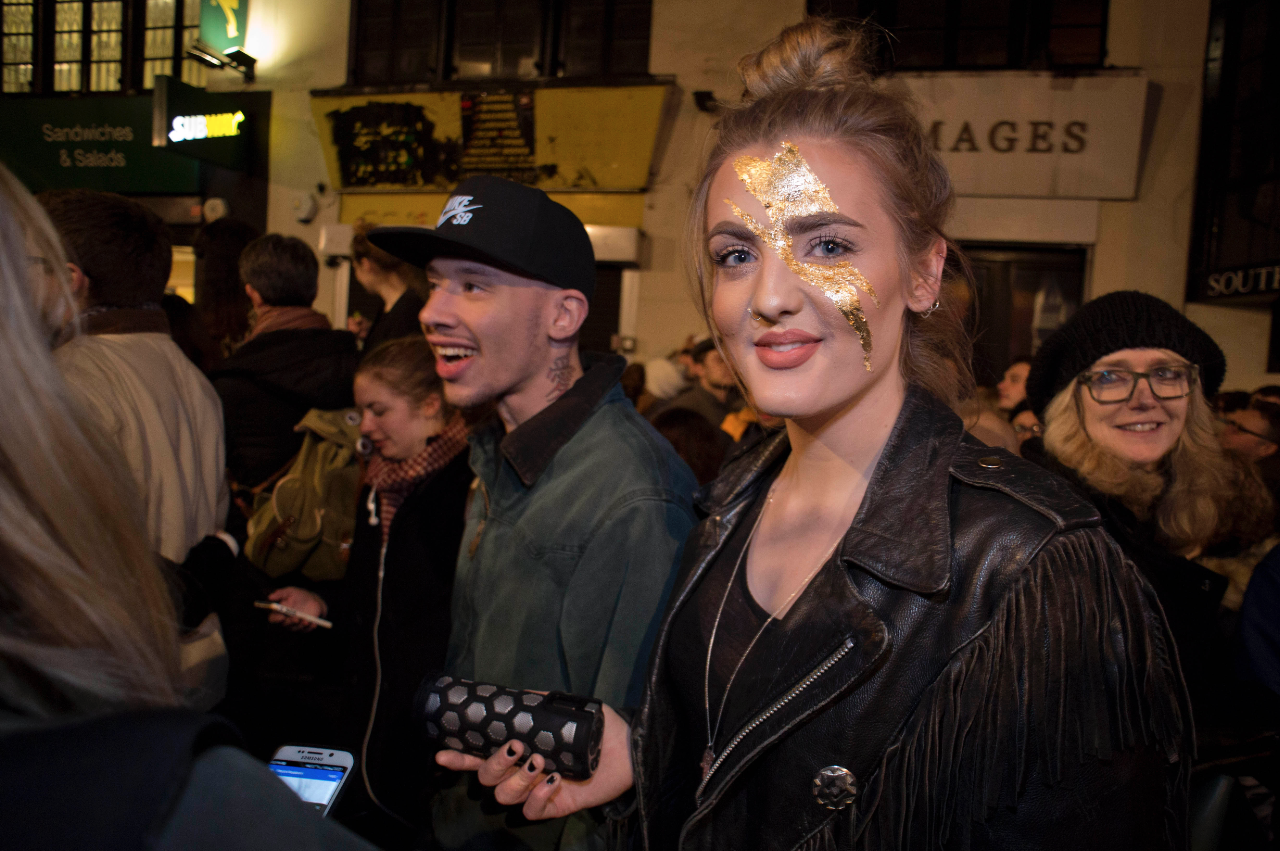 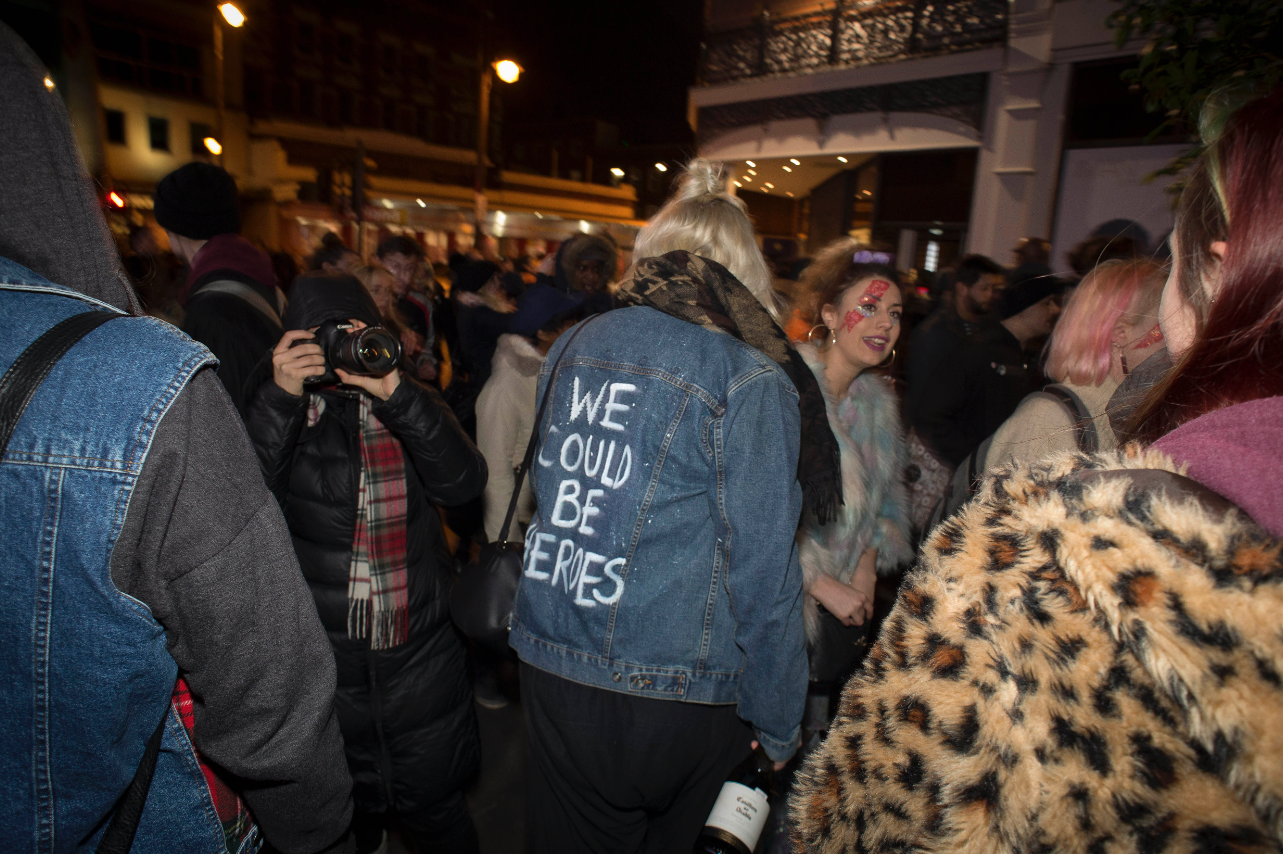 A Low-era Bowie with gelled red hair pushes her way past us into the Prince Albert and we slip inside. It’s nose-to-nose, the screen in the corner playing the video for ‘Jean Genie’, two girls kissing to its side, people on tables, chairs, everyone unable to move yet still thrashing about and throwing limbs to the wiry white funk riff of ‘Fame’.

“People talk about him re-inventing himself, but I don’t think that’s true,” slurs a young woman out back. “He invented and the decades struggled to catch him up. It’s as simple as that.”

The mood throughout Brixton isn’t one of death, but one of intense life. At the back of the pub in the garden, a mangled, drunken acapella of ‘The Man Who Sold The World’ reaches Mick Ronson’s famous guitar riff. Groups fiercely debate their favourite albums in conversations that’ll stay raging until the early hours. Everyone knows you can’t pick a favourite. That there’s an album for every mood. And through the song and celebration, there becomes little need to interview people. Everyone here has only one thing to say: The Duke is dead, long live The Duke.

“Imagine that. Someone who changed that many times over that many decades and still remained totally true to themselves. How many artists can you say that about?” exclaims the young woman next to me, drying a small tear from here eye and taking a sip of her drink. “You just never knew what he was going to do next. Even his death. It’s just so out of the blue. It’s just so Bowie.”

Linkedin
RELATED ARTICLES
OTHER ARTICLES
I grew up accompanied by David Bowie's ever-shifting, transformative music. So did my parents. As he succumbs to cancer at 69, it's time to take a look back at his life, legacy and cultural power.
Guy Henry Mueller is channelling the countercultural roots of California’s drag scene to flip perceptions. But guess what? He’s not gay.