Art & Culture / Photography / Ukraine in turmoil, seen through the eyes of a young local photographer 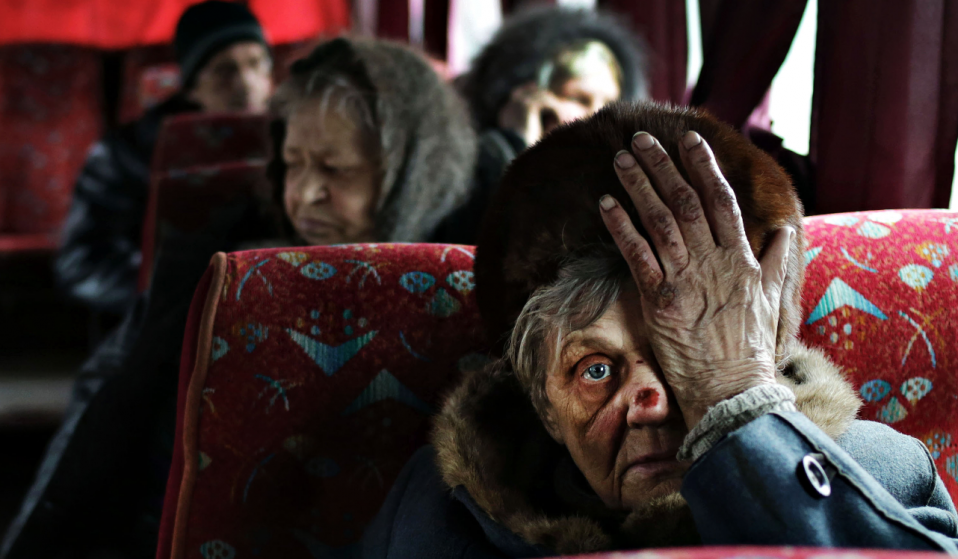 Ukrainian photographer Anastasia Vlasova cut her teeth on the frontlines, covering her first protest when she was just seventeen.

Ukrainian photographer Anastasia Vlasova cut her teeth on the frontlines, covering her first protest when she was just seventeen. At twenty-two, she’s witnessed a revolution and the grief of war. But it’s the people she met - and loved - along the way that taught her the lesson of a lifetime.

My mom and dad never did what they really wanted with their lives. My father is a seaman and my mother an engineer. They are successful, but it was never their choice. When it was my turn to make a choice, I figured I hit the jackpot. I decided to become a journalist.

At first I knew nothing about photojournalism. I’m from a small town in southern Ukraine, where there is no such profession. I got into photography in my first year at Kyiv University thanks to two senior students who are good friends now. It was a new world. I always loved telling stories that challenged people’s attitude, but telling stories in pictures was more exciting.

When I was seventeen, I got a job at an English language newspaper called the Kyiv Post where I covered local protests and city life. I always wanted to be a conflict photographer. Three years later, when the EuroMaidan revolution started in Kyiv, I figured this was my chance; I couldn’t stay away from the changes happening in my country. EuroMaidan was pushing the limits hard, and it was inspiring people to do the same. It was like a massive wave that catches you and just keeps rolling. 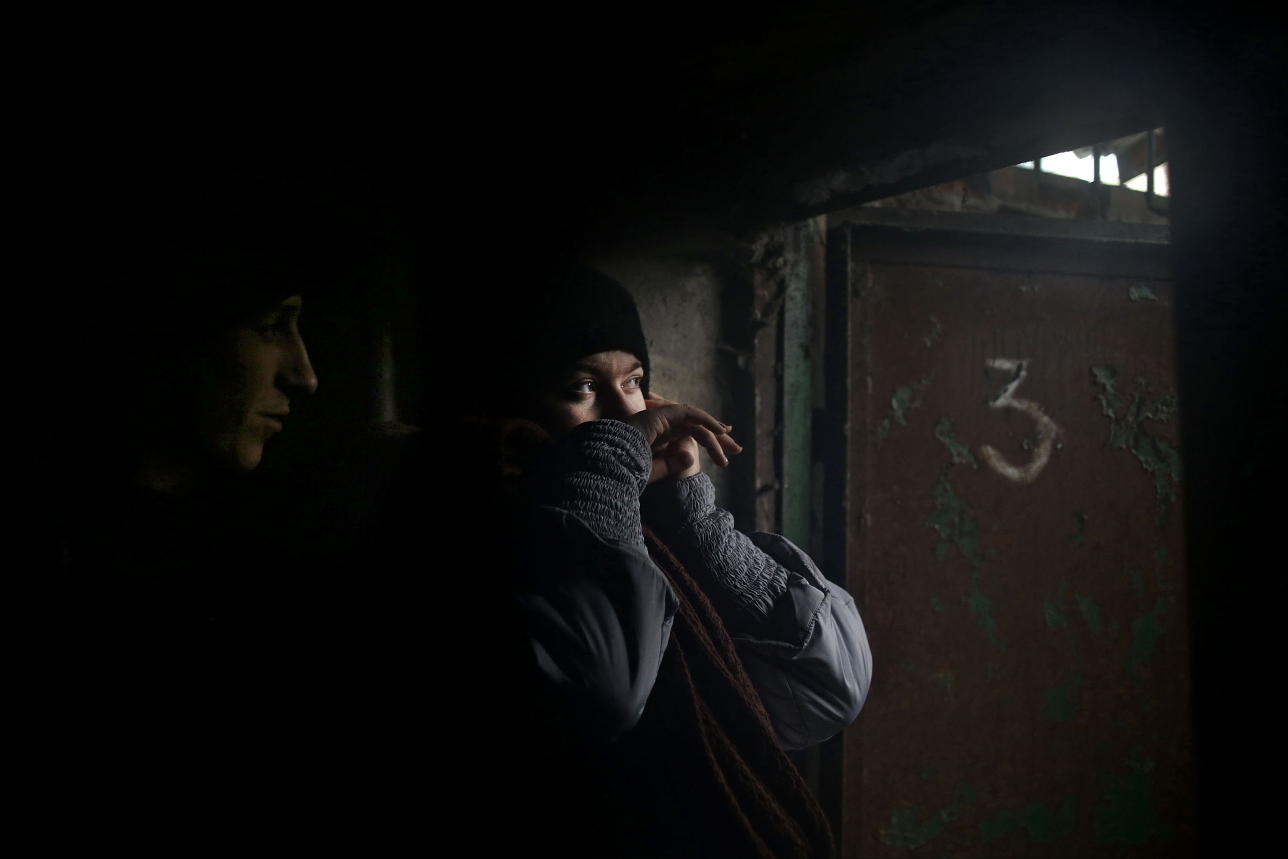 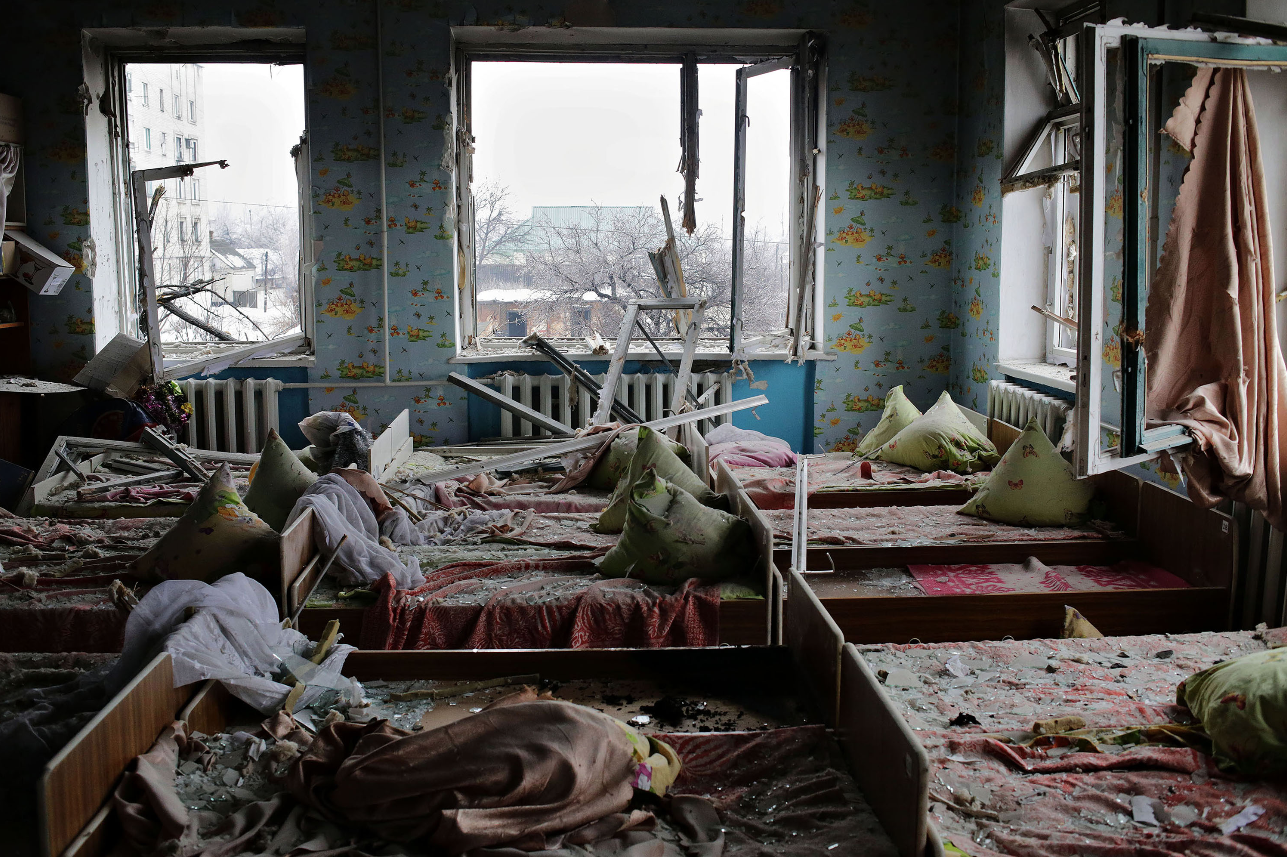 I was covering the clashes during EuroMaidan at Hrushevskoho Street when the riot police started firing rubber bullets at protesters. I was so scared, I panicked. I remember calling my mom and almost crying, saying: “I can’t move, but I feel that this is my place, this is the work I want to do in my life.” That was the moment that changed everything. I returned to photograph the clashes each day and in the end was no longer scared. But I couldn’t have done it without the EuroMaidan protesters – my compatriots – who stood up to fight for their rights. I couldn’t feel cold, tired or sad when I saw thousands of people risking their lives for our better future.

Right after president Yanukovych fled the country, Russia started to annex the Crimean peninsula. Then the war in Donbass started, so I kept following events – extremely sad events for me as a Ukrainian citizen. The main goal in my work is to understand people; I don’t want to tell others who’s ‘good’ or ‘bad’. I am Ukrainian, but I want to understand why people in Donbass started having separatist views, so I went to insurgent-controlled territories, even though I was detained and interrogated for having a Ukrainian passport.

I like taking similar risks with the people I photograph; I like to feel equal while we’re together. When I was photographing the evacuation from embattled Debaltseve in Eastern Ukraine, I hid in a city hall with locals trying to flee. We waited for a bus to take them to a calmer pro-Ukrainian town, but no one knew when it would arrive, and I made friends with people as we waited. The shelling was so loud; it was 500 meters away. We were together in the same situation. Some may say I’m stupid, but I made the decision to not wear a flack jacket. I didn’t what to make them feel that my life was for some reason more important than theirs. 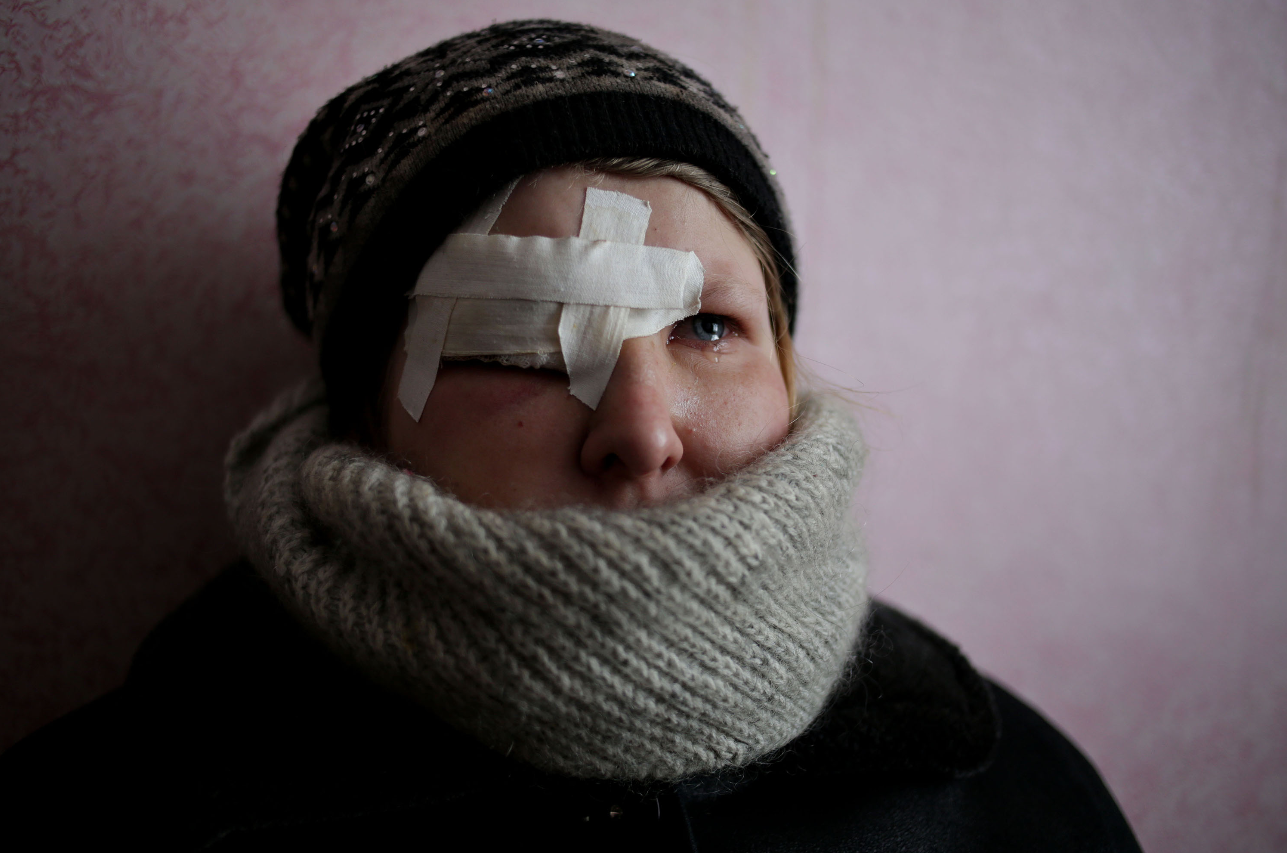 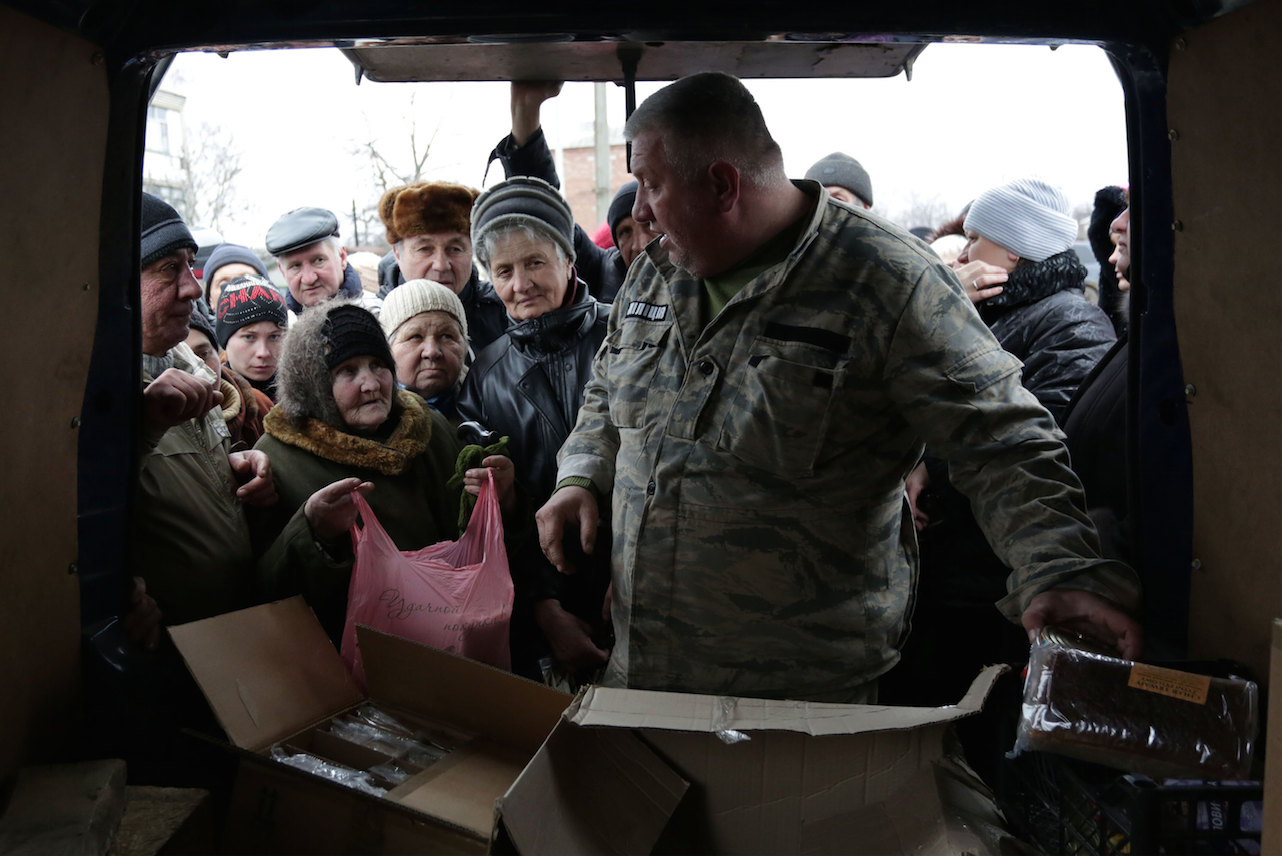 My good friend and mentor Anastasia Taylor-Lind – who also documented EuroMaiden – says, “War is personal.” And its personal for everyone. I will always leave my fingerprints in the pictures I make. And I like that fact, because I’m not a historian; I cannot always know the truth, but I can say what I know, what I saw and what I felt. I will always be afraid that war can come to my native southern town, Kherson, where my parents still live, because it’s not far from the frontline, and I will always be afraid that something might happen to my boyfriend, who serves in the army as a military paramedic.

I first met my boyfriend during EuroMaidan, and we met again in the war zone. He was one of the Ukrainian servicemen trapped in Debaltseve pocket last February. I was there, covering the conflict from the Ukrainian side, when they got trapped in Debaltseve for two weeks. We spent those two weeks forty kilometers from one another, separated by pro-Russian insurgents and shelling, but there wasn’t a single moment when we didn’t think about each other.

Before I met him, I was kind of addicted to war. I couldn’t stay away from it for a long time. Life in Kyiv didn’t seem real to me anymore, but the feelings that appeared between us made me understand that life is not only pain, grief and suffering, and I should appreciate every moment of happiness I have. 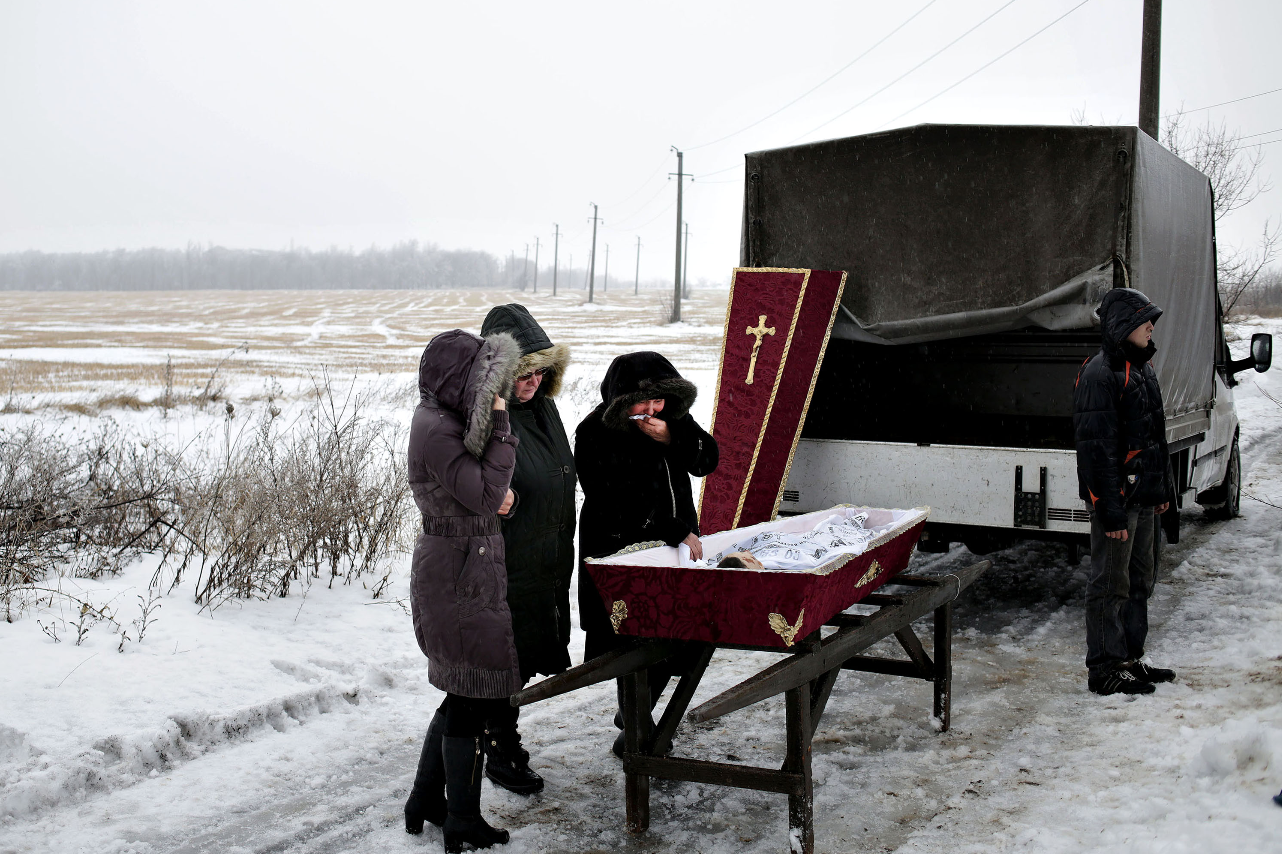 I used to doubt whether I was really issue-driven about the crisis, or whether it was just the adrenalin talking in my head. It’s the same with love; was I really in love with this man, or was it just the crazy situation bringing us together? Recently, I realised that not only are those feelings all real, they’re probably the most real thing in my life. Real are the feelings that we experience at the times when we’re pushed to our limits, and war is just one of many things that push us. I will never regret any decision I made to put myself in danger, because I care. And I will never regret opening my heart to the people that I’ve met.

This story originally featured in Huck 52.

Linkedin
RELATED ARTICLES
OTHER ARTICLES
Photojournalist Anastasia Vlasova has documented the conflict breaking her country apart since she was just seventeen. Here’s who she follows on Instagram.
Gentrification is taking its toll on the city’s cultural fabric. Artist and photographer Clayton Patterson throws his weight behind the #SaveNYC campaign.
Director of powerful documentary about the prescription drug problem in Oceana, West Virginia, comes clean about his Appalachian opus.