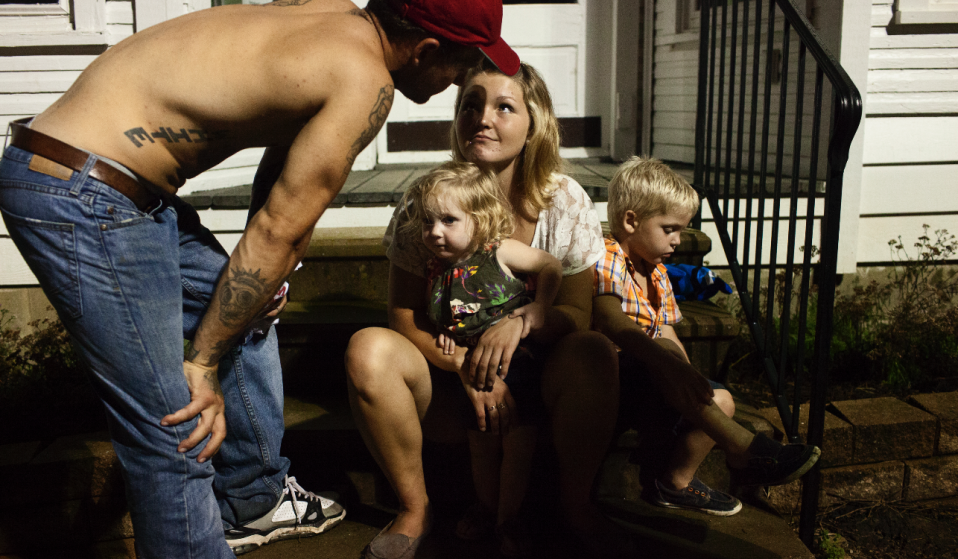 A chance encounter with a couple at a fayre in Ohio became a story that never ends for documentary photographer Sara Naomi Lewkowicz.

A chance encounter with a couple at a fayre in Ohio became a story that never ends for documentary photographer Sara Naomi Lewkowicz.

“I met Maggie and Shane my first weekend of grad school in Athens, Ohio. When you’re new in a community, you just do what any journalist would: you look at local newspapers for events. Fayres are always a good situation to meet people because they’re having fun, so I went to this carnival and saw this guy. He had tattoos on his face and neck and he was holding this really beautiful little girl. Admittedly, I was sort of horrified by the tattoos and had to check myself about how judgmental I was being. I went over and started to talk to him. That’s how I met Shane – the little girl he was holding was Memphis, his girlfriend Maggie’s daughter.

“Initially, when I see somebody a variety of things can spark my interest. Sometimes it’s the look on their face, sometimes it’s their interaction. I’ll just get a feeling, like a sixth sense. I had certain context clues that made me suspect Shane had been incarcerated. So I asked him, and he was very honest with me. Once I started talking to them both it was that honesty that drew me in. And I haven’t stopped documenting Maggie since. 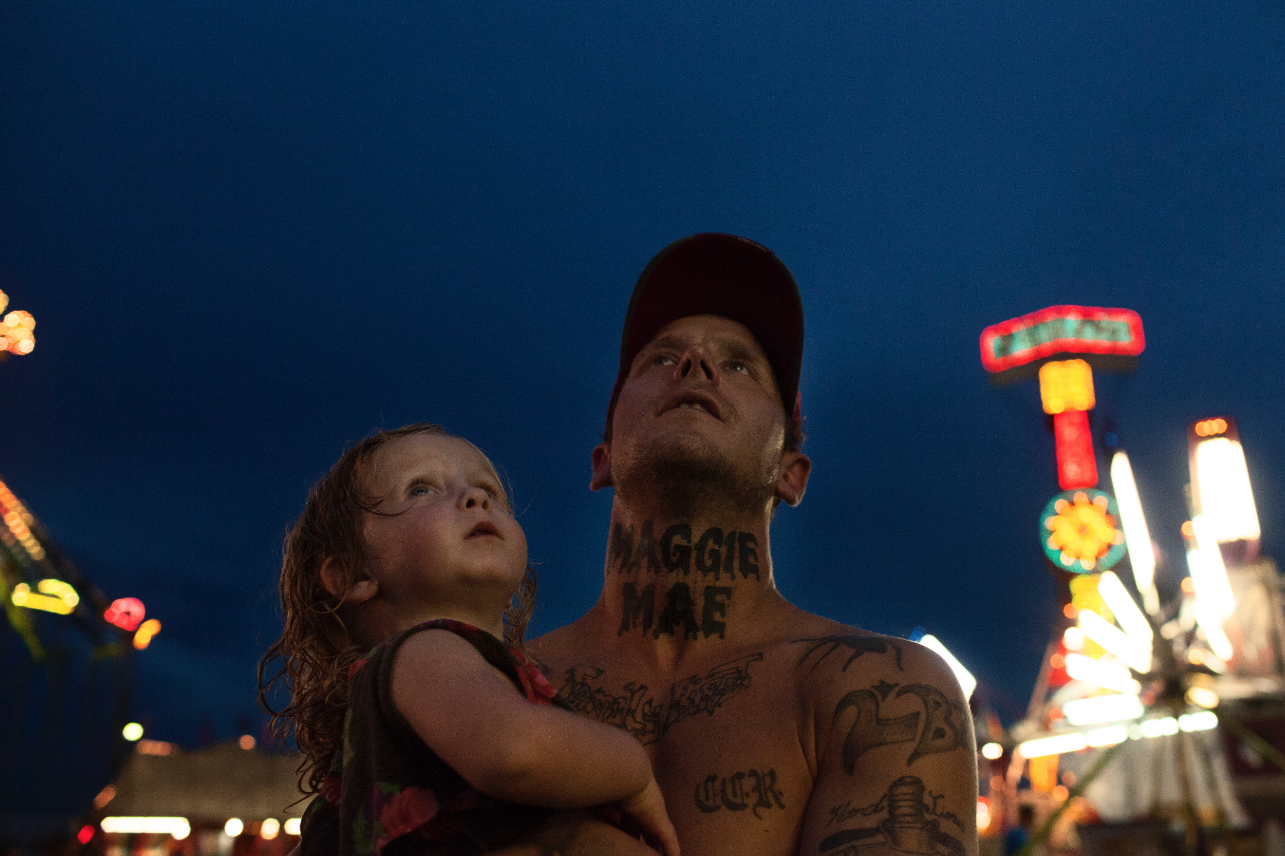 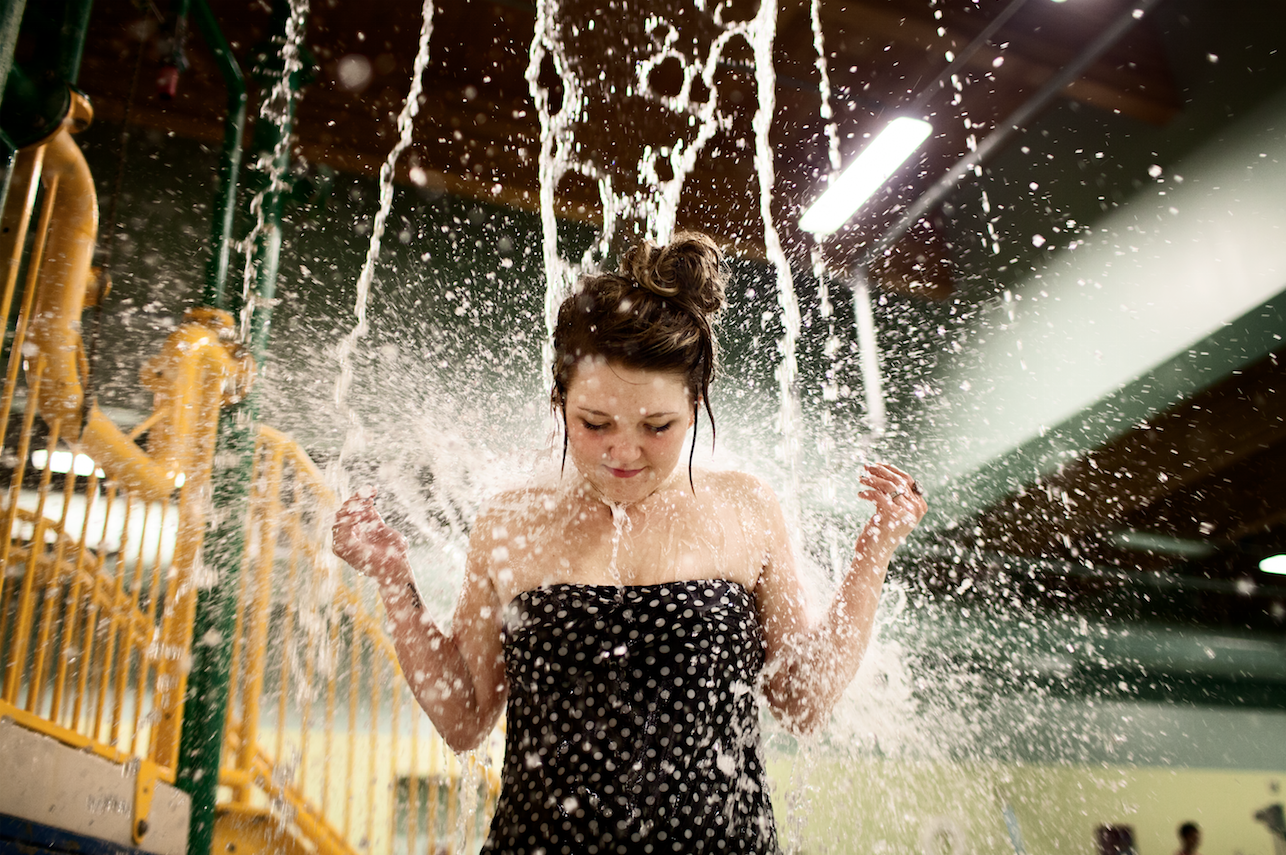 “I was twenty-nine when I met Maggie, she was nineteen. She was a single mom of two, in this intense relationship, and at first we just talked a lot. We had commonalities even though we grew up in very different ways. That’s the thing I strive to achieve: I may not be able to relate to being a teenage mother – I’ve never been a mother period – but I can relate to feeling frustrated. So when we talk, I can ask the right questions.

“As an undergrad student, I was not successful in doing stories. I could take a good single, but I had trouble with longer projects. A lot of it had to do with how anxious I was at connecting with people. If you’re not confident with your reasons for going up and talking to somebody then what reason do they have to be confident talking to you? I still get pretty nervous, so a lot of my process is about asking lots of questions – and also telling them things about me. They have to know me in order to trust me. And when I explain what I wanna do, there’ll be something in their tone of voice that suggests they feel comfortable. It’s a sense you get from people. It’s not necessarily what they say it’s how they say it. 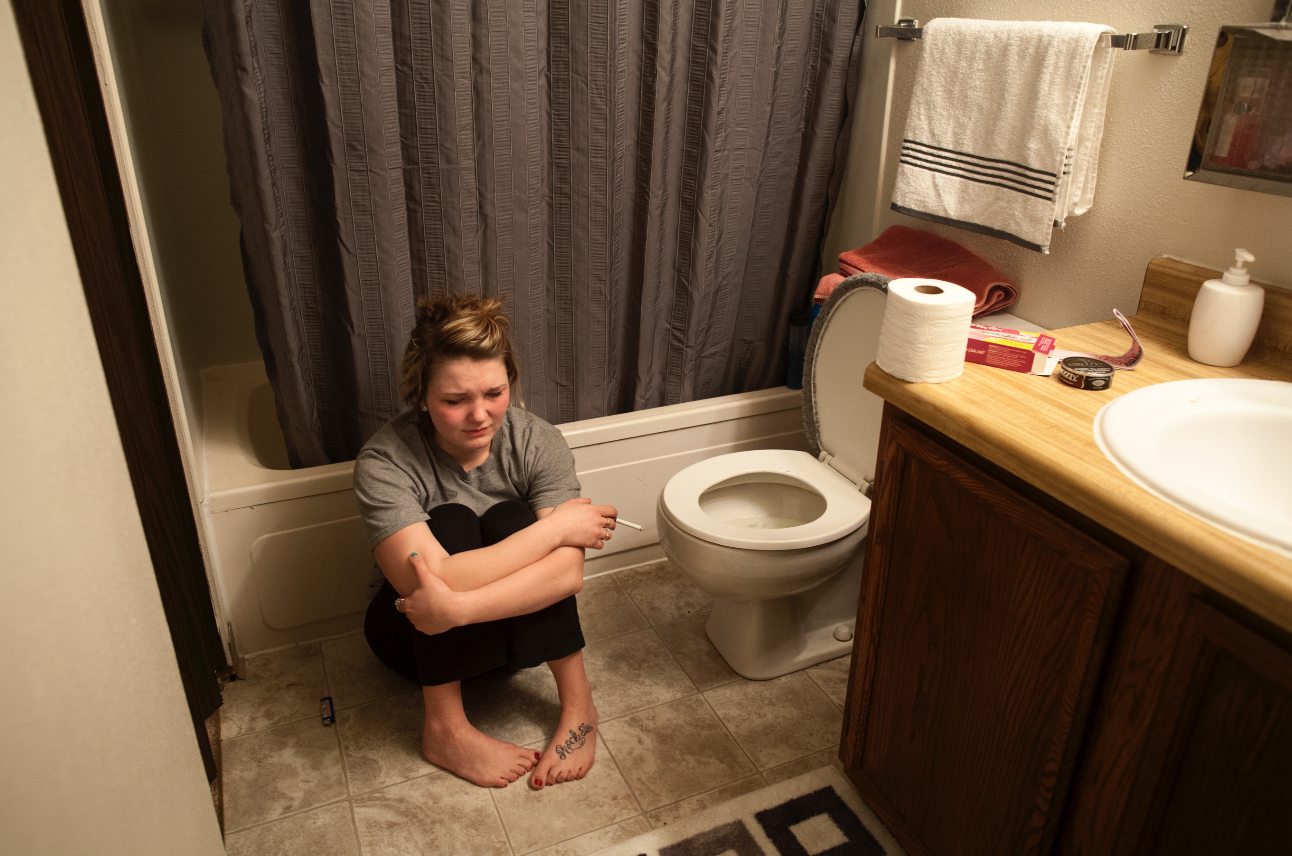 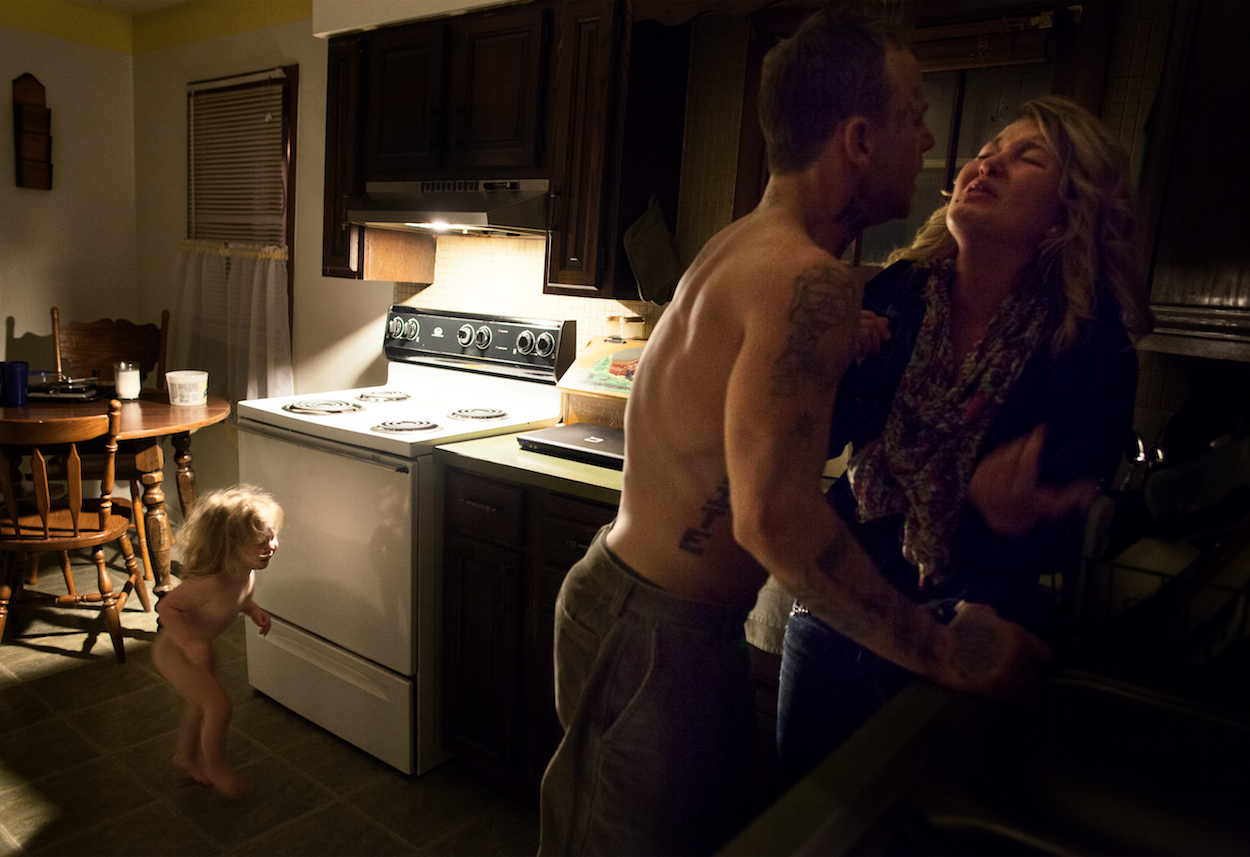 “One day Maggie was talking about them fighting and I don’t know why but I asked her, ‘Has he ever hit you?’ She said, ‘No’, but that he’d dragged her by her hair. I was shocked and upset and didn’t know how to react. I didn’t want to launch into a lecture about what she should do, so I just asked more questions and tried to listen.

“Two nights later, they were at a bar and there was some girl trying to dance on Shane. Maggie got jealous and left. Shane got angry and it just spiralled from there. I had to drive Shane back to the house and as soon as we got back, things just erupted. I didn’t question whether or not to shoot. And they didn’t pay me much mind. People talk about being a fly on the wall but I don’t think you should skulk around hoping people don’t notice you. For me its about being so present that they forget about you. You become like another piece of furniture.

“Domestic violence is the theme most people pick up on in this story. But it’s also about the struggles that young single mothers face, all the ways in which society makes them vulnerable to their fates. Maggie and Shane eventually broke up, and now she’s pregnant again with a new boyfriend, and Shane is in and out of prison on a downward spiral. Maggie always seems to seek out a relationship for emotional and perhaps financial reasons. It’s scary being alone when you’re young, and single moms don’t get nearly enough help. So the story it’s definitely not just about that violent night. And now it’s becoming about Memphis, too. She’s growing up in the same small town that Maggie did, so it’s about the long-term effects of these situations. 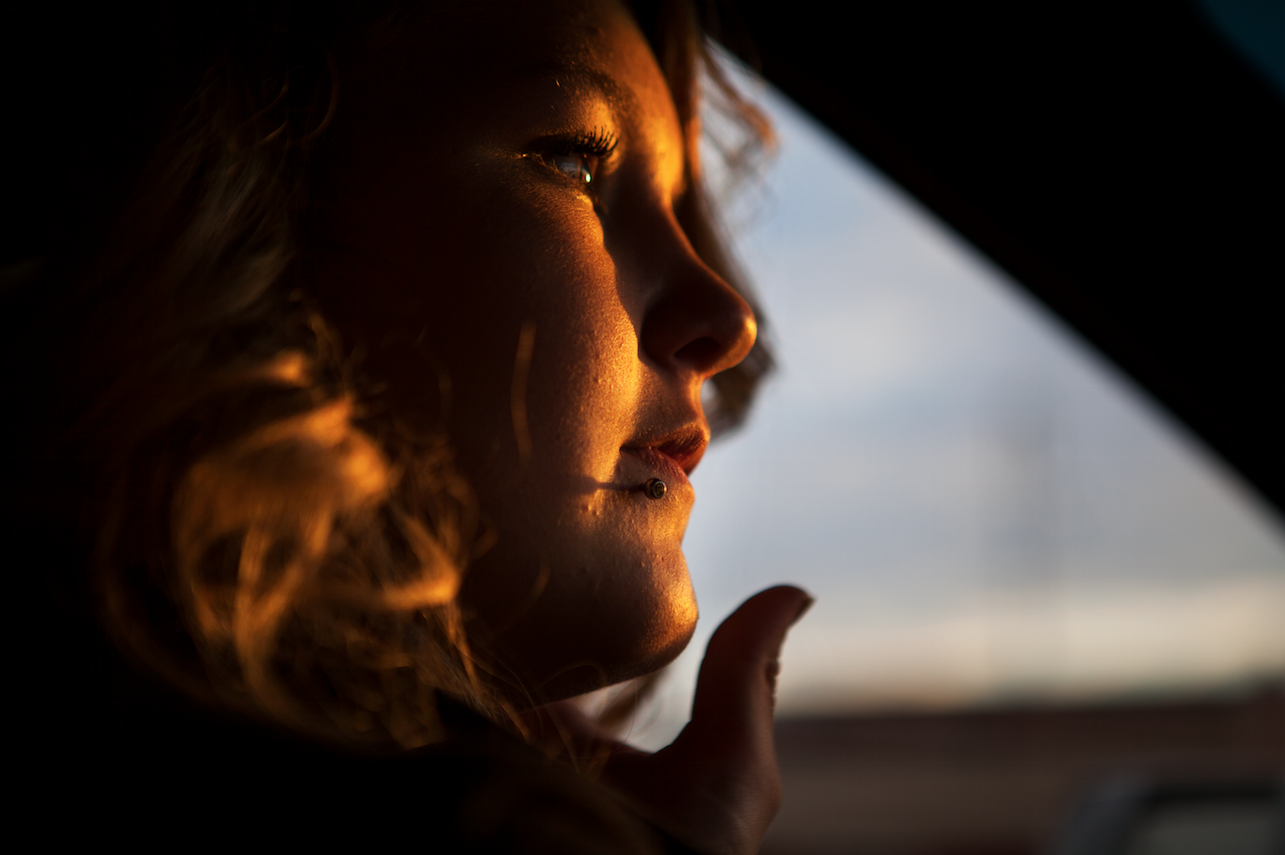 “As friends, Maggie and I speak very intimately and I’m sure our conversations have had a part in her growth. But Maggie didn’t need my project to learn anything new about herself. She’s living this life; she’s a highly intelligent, highly sensitive person who’s very attuned to things. But if there’s one thing this project has taught me, it’s that people will let you get close. You have to know your reasons – and trust those reasons – but people will let you get close because they want to be heard. They want to be valued and understood, but you have to make yourself vulnerable, too. It’s transactional. I read an article once that said human interactions are always transactional. And I think that’s true. You need to be open if you want people to be open with you.”

This first-person account by the photographer was based on an interview.

Linkedin
RELATED ARTICLES
OTHER ARTICLES
When Adriana Monsalve set out to capture the nuances of albinism, she began to understand her own sense of identity.
While UN climate talks open up in Paris, Beijing is in the midst of an environmental health crisis, with levels of pollution literally off the charts.
To celebrate the launch of Lucien Clarke's new pro Supra shoe, photographers James Edson and Daniel 'Snowy' Kinloch curate an exhibition of the mythical PWBC.