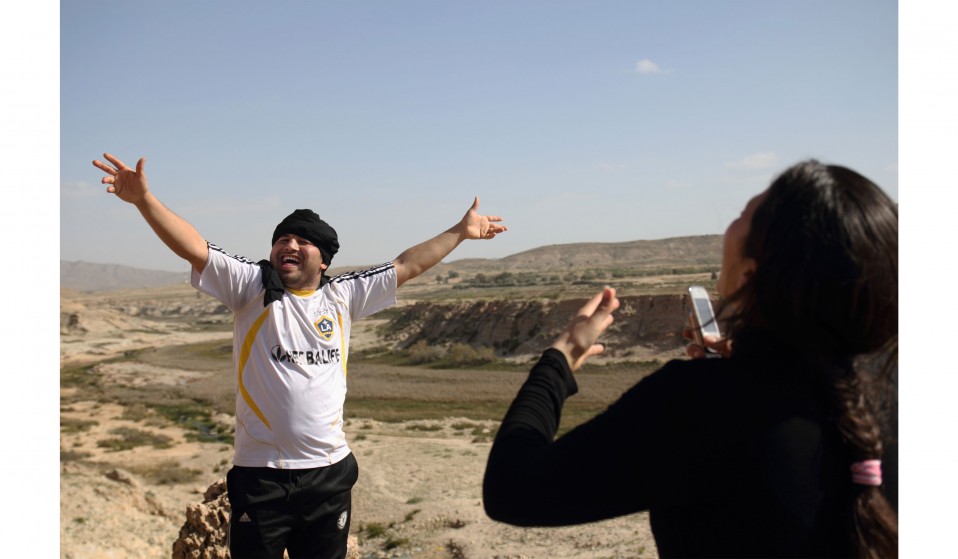 i
Sidi Bouzid, Tunisia, March 13, 2011 – Two friends of Mohamed Bouazizi – the young man who set himself on fire on December 17, 2010, in an act that became the catalyst for the revolution – take photos of each other in a valley outside Sidi Bouzid, where the self-immolation started. 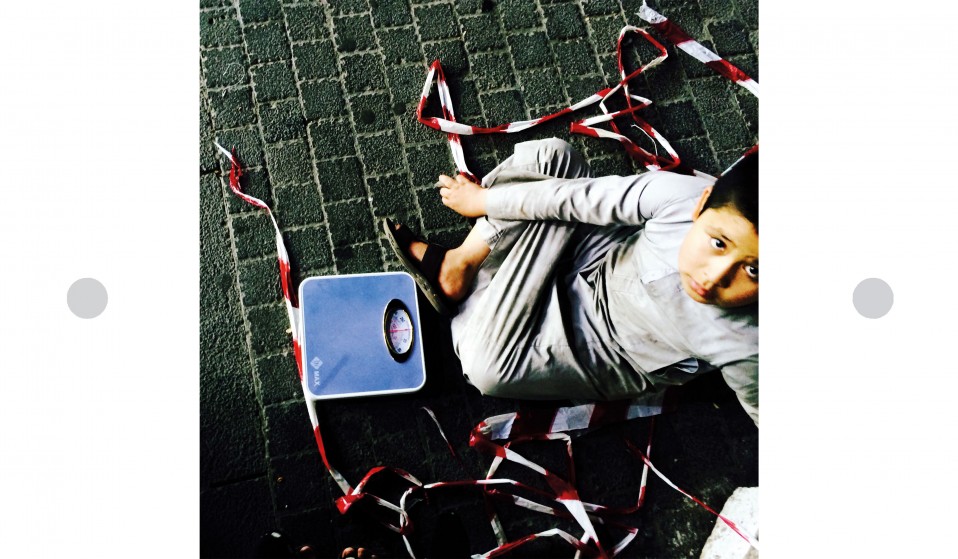 i
An Afghani child weighs passers-by for a living in Jeddah, @photisbyiman. 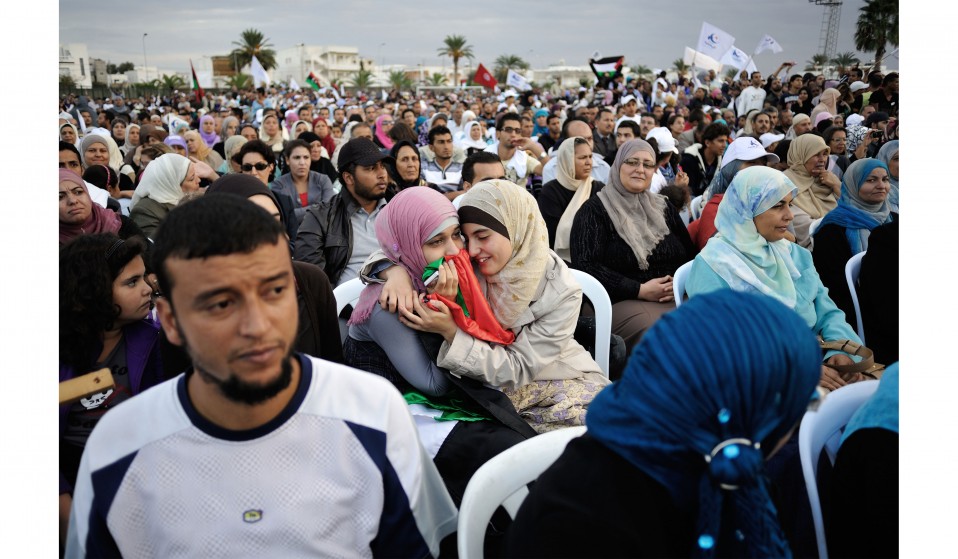 i
Ben Arous, October 21, 2011 – Two days before Tunisia’s first free elections, young supporters of the Islamist party Ennahda embraced during an election rally. During the era of Ben Ali, the party was banned and Islamists were often persecuted and imprisoned. 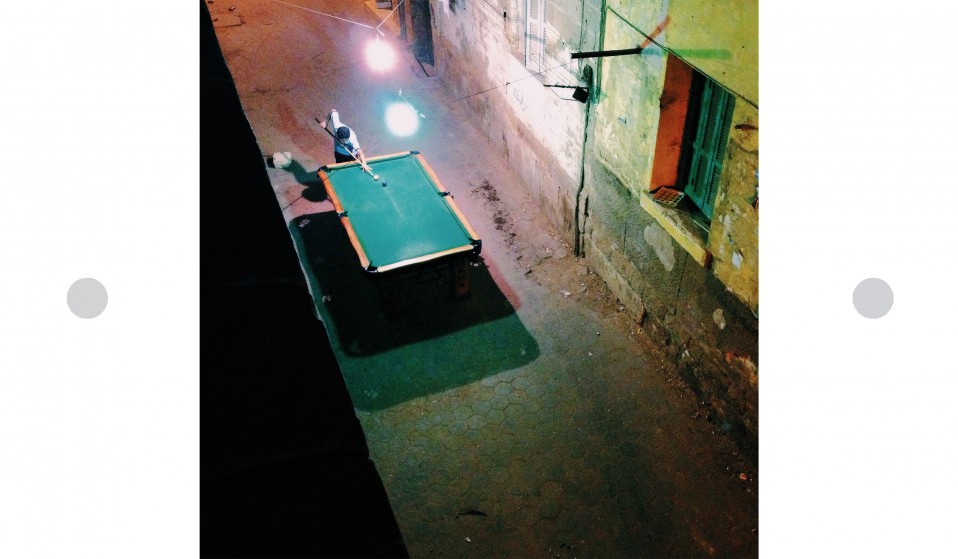 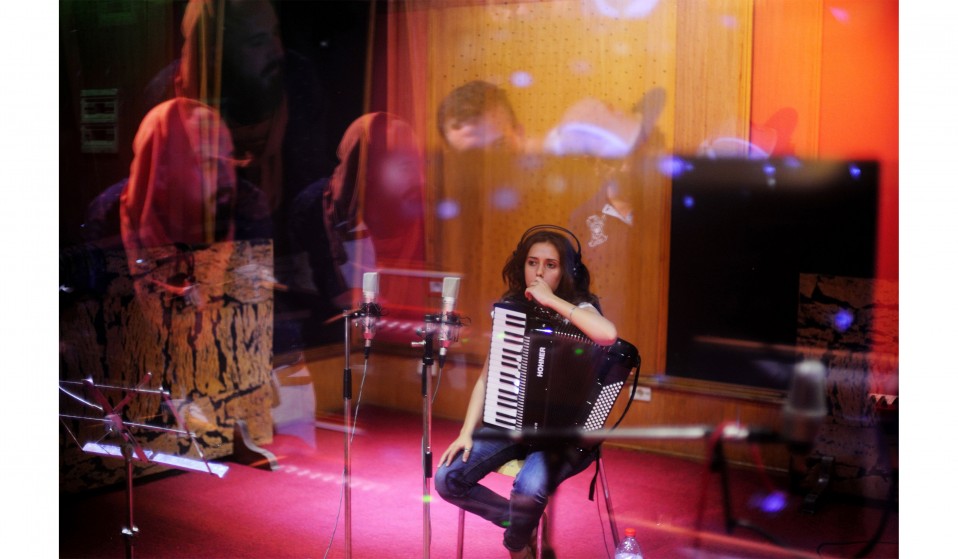 i
Tunis, Tunisia, October, 2012 – Musician Youssra El Hawary records in a private studio in Tunis. The recording session was part of a workshop for female Arab musicians to produce a record together. Participants included a Tunisian singer, a Libyan rapper, and an Egyptian accordion player. 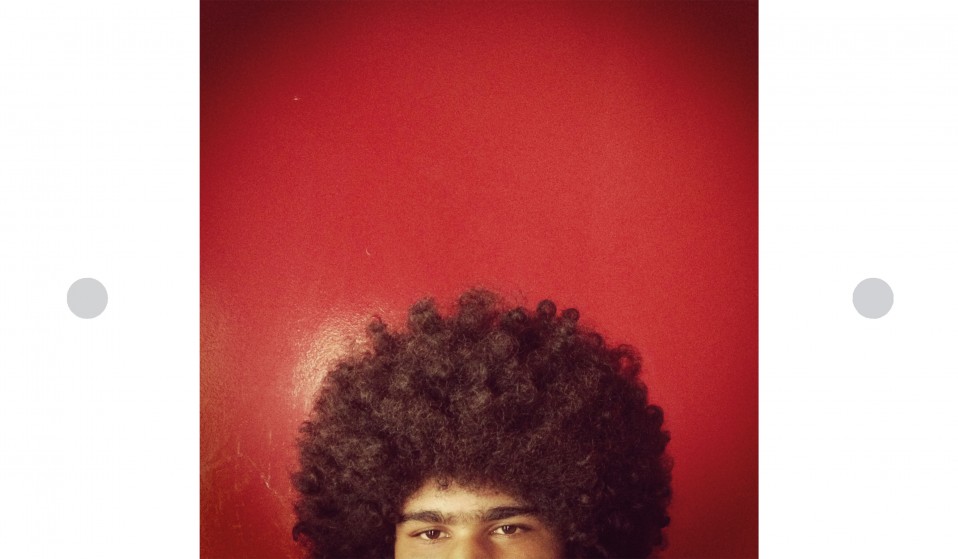 As the media sets its sights on Tunisia once again for the country’s first democratic presidential election, Lindsay’s Mackenzie’s Instagram project reveals snapshots of the everyday lives sidelined by the explosive coverage of the region.

As the media sets its sights on Tunisia once again for the country’s first democratic presidential election, Lindsay’s Mackenzie’s Instagram project reveals snapshots of the everyday lives sidelined by the explosive coverage of the region.

In January 2011, inspired by a young street vendor’s self- immolation, ordinary Tunisians walked onto the streets into a wall of tear gas and riot police to demand change. Zine El Abidine Ben Ali, their dictator of twenty-three years, fled the country.

It’s a familiar story. Reporting on the Arab Spring usually includes a nod to Tunisia as the ‘birthplace’ of the uprisings that spread across North Africa and the Middle East. But then it moves on.

I stayed. To me, it seemed important to document more than just the beginning. What happens next? It’s one thing to force a dictator to flee, but another to replace a dictatorial system with something else. Something else that works.

Someone had to take charge, but not take over. Elections, campaigns, political parties, a new constitution – the basic infrastructure of society had to emerge. A new national identity had to be defined; would it strike a balance between secular and religious beliefs? The root causes of the revolution – joblessness and stagnation, hopelessness and frustration – had to be addressed. 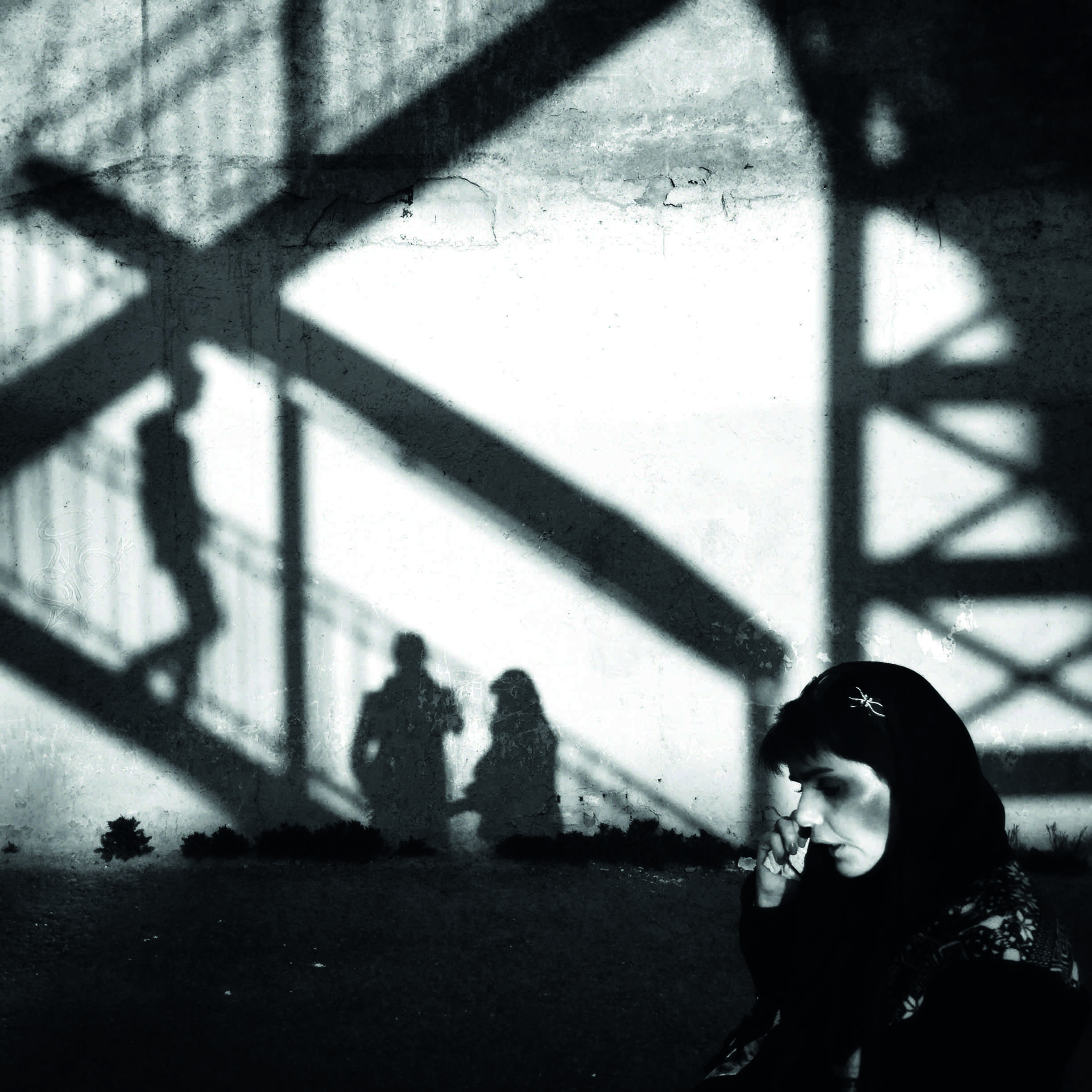 A woman talks on her phone as she walks up a street in west Tehran, @HanifShoaei.

Over the next two years I was based in Tunisia, it came to feel like home. But I hardly recognised the place when I looked at western mainstream media. The only photographs I sold to western media organisations were of women wearing niqabs, and protesting men with beards and black flags.

“MUSLIM RAGE”. That was the title of a Newsweek cover story in September 2012. The cover photo, predictably, focused on angry bearded men shouting at a protest.

And so it went.

On October 23, 2011, Tunisia organised its first truly free elections since independence in 1956. I watched the press corps arrive en masse to cover the story. But on October 20, three days before the elections, they all left. Libyan leader Muammar Gaddafi had been pulled out of a culvert and killed in Sirte, on camera, by a group of rebel fighters who then displayed his bullet-ridden body in a giant freezer in Misrata.

On the night of the Tunisian elections I ran into a friend and asked him if he voted. He proudly showed me his ink- stained finger and told me that the polling station where he was assigned to vote was his old high school. The classroom where he cast his ballot, he said, was where he once took a class about democracy during the dictatorship. “Today was the first day I could use what we learned in that class,” he told me, holding back tears.

But stories like these – the quiet dignity that marked Tunisia’s successful elections, the overwhelming voter turnout that put ‘modern’ democracies to shame – were overshadowed by grainy cellphone videos of the grisly mob death of the senile dictator next door. That was our only image of the Arab world that week. 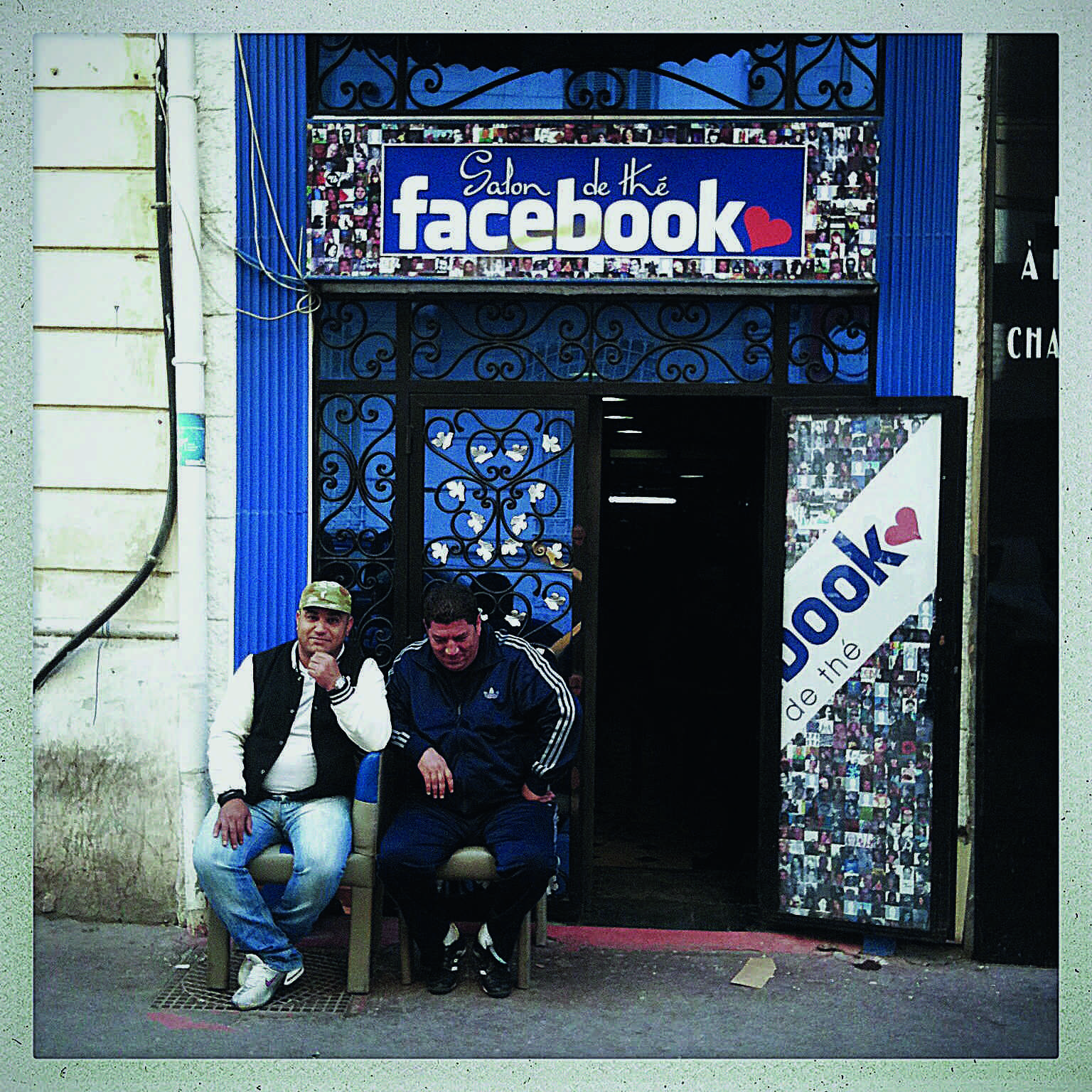 Patrons sit outside the Facebook Cafe in downtown Tunis, @lindsay_mackenzie.

As Tunisia tried to find its way, there was always something more tragic, more gruesome, more sensational. Tunisia’s transition hasn’t been problem free. Far from it. But it hasn’t descended into chaos. And so, for the most part, it hasn’t been covered. We only see the photos of women wearing niqabs and shouting bearded men.
It’s not that I believe that we shouldn’t cover those things. But that we shouldn’t cover those things exclusively. Repeatedly. And without context.

I couldn’t publish everyday images from Tunisia in the mainstream media, so I started posting them on Instagram. Inspired by Everyday Africa, another Instagram project founded by photojournalist Peter DiCampo and writer Austin Merrill, I gathered together a group of photographers from across North Africa and the Middle East to contribute to Everyday Middle East (@everydaymiddleeast). It may not be the most high-profile documentary photography platform, but I believe our portrayal of the region is more accurate than that of many ‘legitimate’ media outlets.

Maybe one day the ‘real’ media will grow up and find a way to cover ‘others’ more like we cover ourselves – as complicated beings, products of complicated circumstances, capable of a range of emotions. Until then, we’ll be on Instagram.

Linkedin
RELATED ARTICLES
OTHER ARTICLES
At his West Bank restaurant, Fadi Kattan established himself as the voice of modern Palestinian cuisine. Now, he’s bringing his innovative, bold flavours to the UK’s capital.
Activists and campaigners are fighting back against new laws that would seriously undermine the ability to take industrial action, calling it an attack on fundamental workers' rights.
Photographer Becky Tyrell went down to the fading banger and stock raceway to meet a community desperate to keep it alive.
Tristan O’Neill’s shots of dancers caught in moments of reverie at the height of rave’s golden age are a testament to the UK’s legendary club culture.
Social prescribing connects people with non-medical support to improve their health and wellbeing – but some experts worry it’s just a stick plaster solution.
Since 2007, Gideon Mendel has made 20 trips to document floods in 13 countries. The result is an alarming record of what has already been lost to the climate emergency.