Art & Culture / Photography / A secret history of cross-dressing, in photos 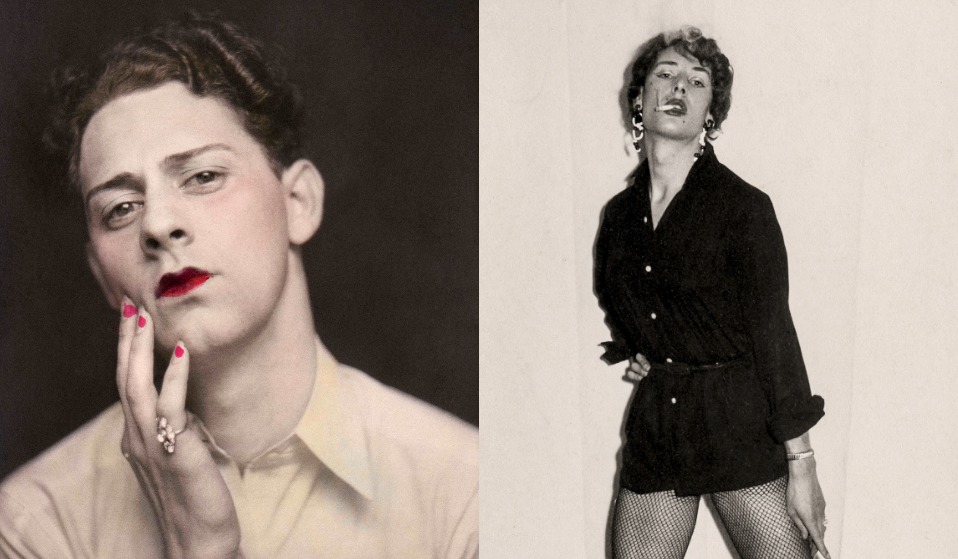 Sébastien Lifshitz has spent years trawling through flea markets, eBay and junk shops in an effort to trace the history of Europe’s cross-dressing culture. Now, his incredible collection is going on display at London’s Photographers Gallery.

Sébastien Lifshitz has spent years trawling through flea markets, eBay and junk shops in an effort to trace the history of Europe’s cross-dressing culture. Now, his incredible collection is going on display at London’s Photographers Gallery.

At the tender age of 10, Sébastien Lifshitz began collecting found photographs of men and women who refused to conform to the strictures of gender roles that demanded dressing according to an arbitrary set of rules. Here, in the privacy of their own space, they were free to don whatever clothing they wished and created a picture that stood as evidence to who they knew themselves to be.

Over the years, Lifshitz haunted flea markets, garage sales, junk shops, and eBay, amassing an impressive collection of amateur photographs of mostly anonymous men and women from Europe and the United States that date between 1880 and 1980. A selection of these works is on view in Under Cover: A Secret History of Cross-Dressers at The Photographer’s Gallery (February 23 – June 3, 2018).

“The subject of gender non-conformity and trans identity is something that feels very urgent right now: in our press, our social consciousness,” observes Karen McQuaid, Senior Curator at The Photographers’ Gallery. “We live with socially cultivated assumptions that men are one way and women are another when it comes to our dress, our actions, our accessories, our ambitions even – and historically there hasn’t been a lot of freedom in how we respond to these things. The more these issues are discussed openly, the more we educate each other and see gender as a spectrum.” 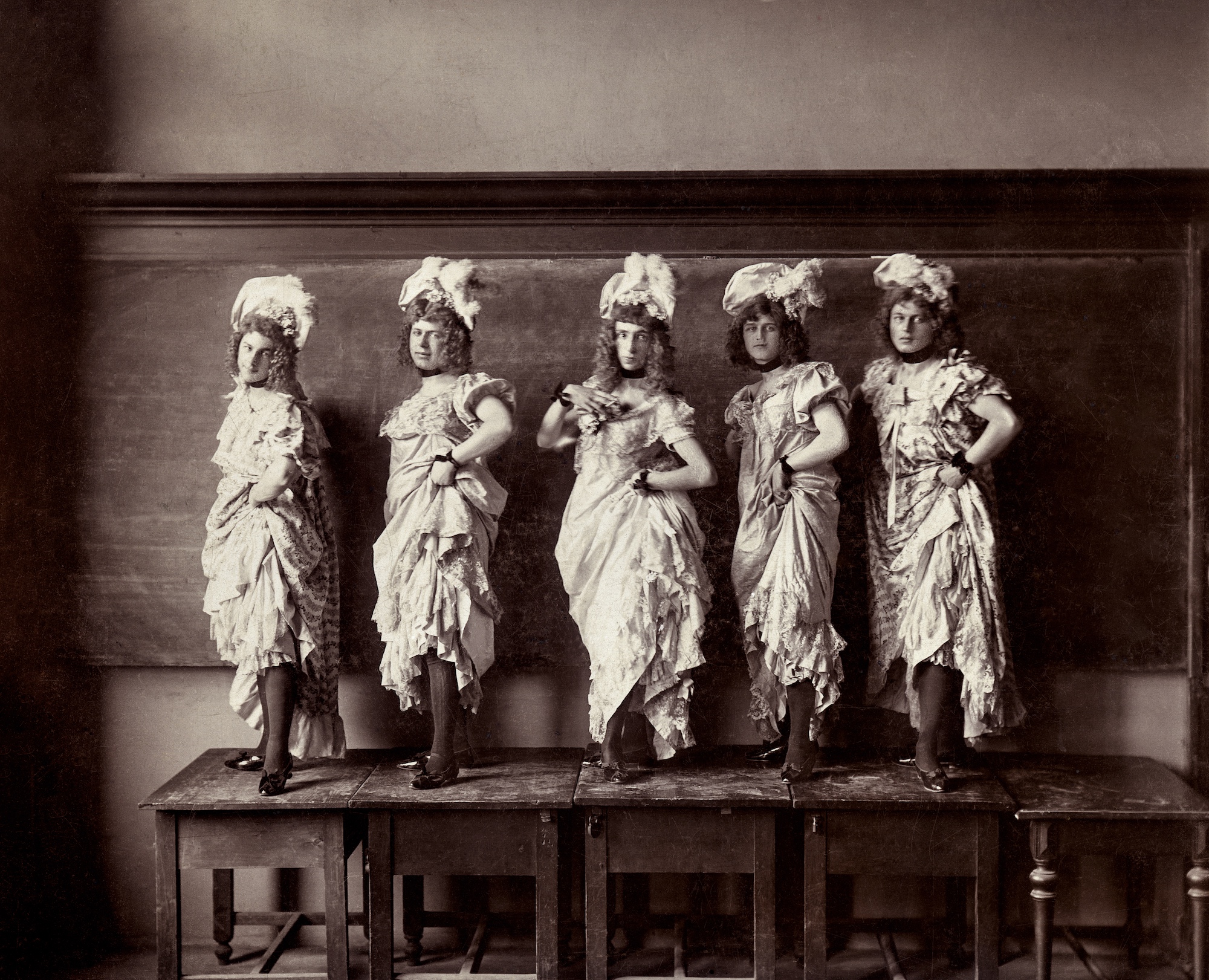 This sophistication is seen throughout Lifshitz’s collection, which reveals a wide range of styles and attitudes toward gender, costume, and identity. The more we look, the more we understand how limiting and disempowering it is to put gender inside a box and trap people within the confines of someone else’s definitions.

“One of the important things is to keep in mind is that the motivation for any of these individuals presenting as they do in front of the camera cannot be defined with any certainty,’ McQuaid explains. “There is a whole range of gender non-conforming presentations here, and one of the joys of the show is to dwell on those differences. We might come out of it with a broader understanding of how people deal with gender, dress, and identity. Because most people are unidentified we cannot say with certainty whether they were playing around in front of the camera or if this was a more serious part of their life, their identity and their practice.” 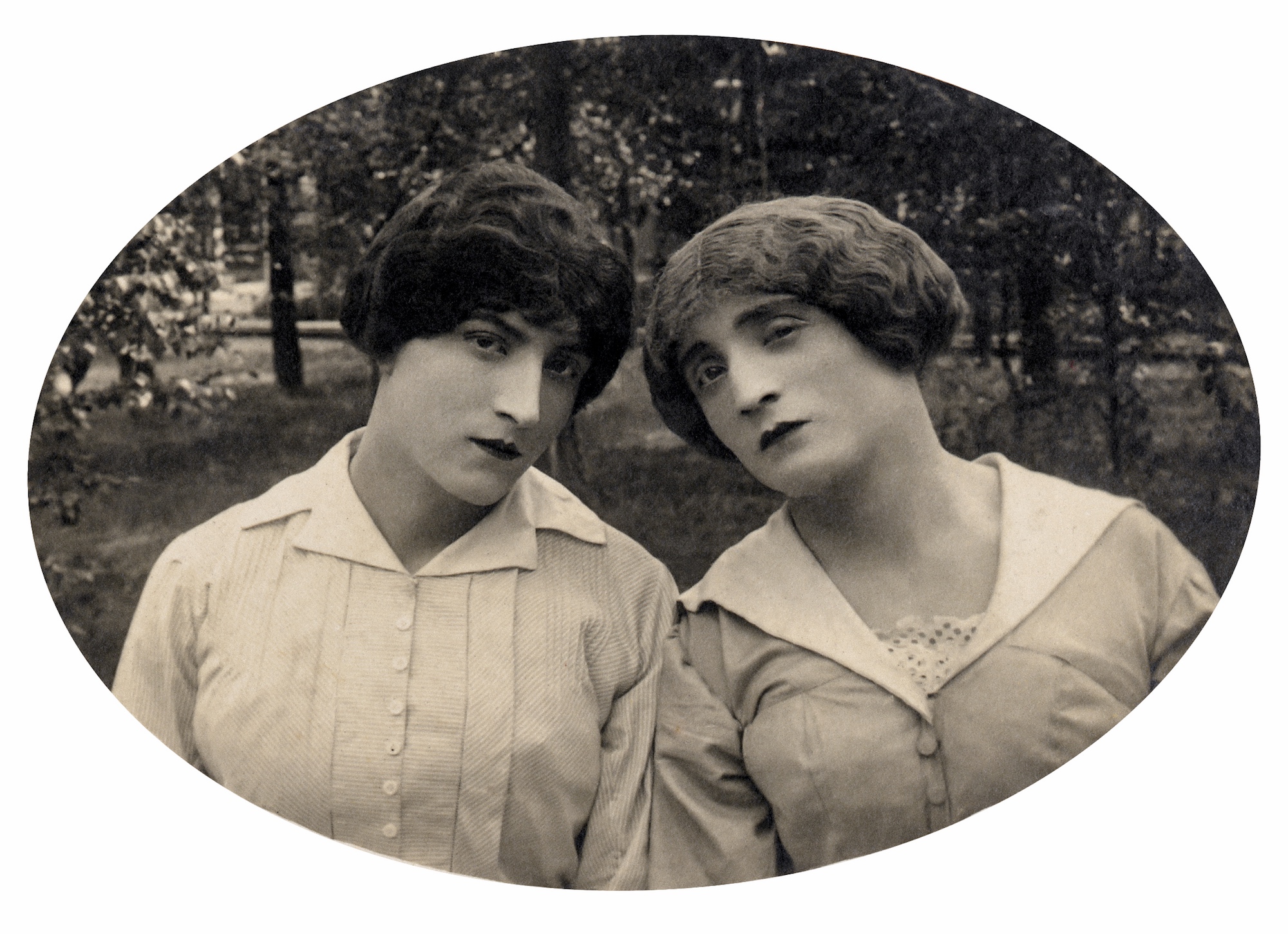 French prisoners of war in the German camp Königsbrück. Written on verso ‘Kriegsgefangenen- Sendung’. Germany, circa 1915.

The beauty of the photographs has a deeper resonance when you consider them as artefacts of a much deeper truth. “You have the documentary evidence of people who are purely resisting dominant and prescribed ways of being and that in itself is liberating to know – that it was persistent across all of these decades, communities, and societies,” McQuaid reveals. “You also have that much more private photographs, if someone does not want to present a certain way full time, and a lot of cross-dressers don’t; they say this is something I want to do part-time or sadly some people just don’t feel safe enough to, photography provides this amazing visual arbiter, proof that you have succeeded in achieving a look that you were aiming for.”

In this way, the photograph becomes a declaration of self, an object that exists as a testament to a secret that must be shared. “Sébastien was deeply affected by their lives, as he describes, ‘existence’s lived against the grain,’” McQuaid adds. “He was really struck by how courageous these people have to be to overcome the prejudices to be who they wanted to be.” 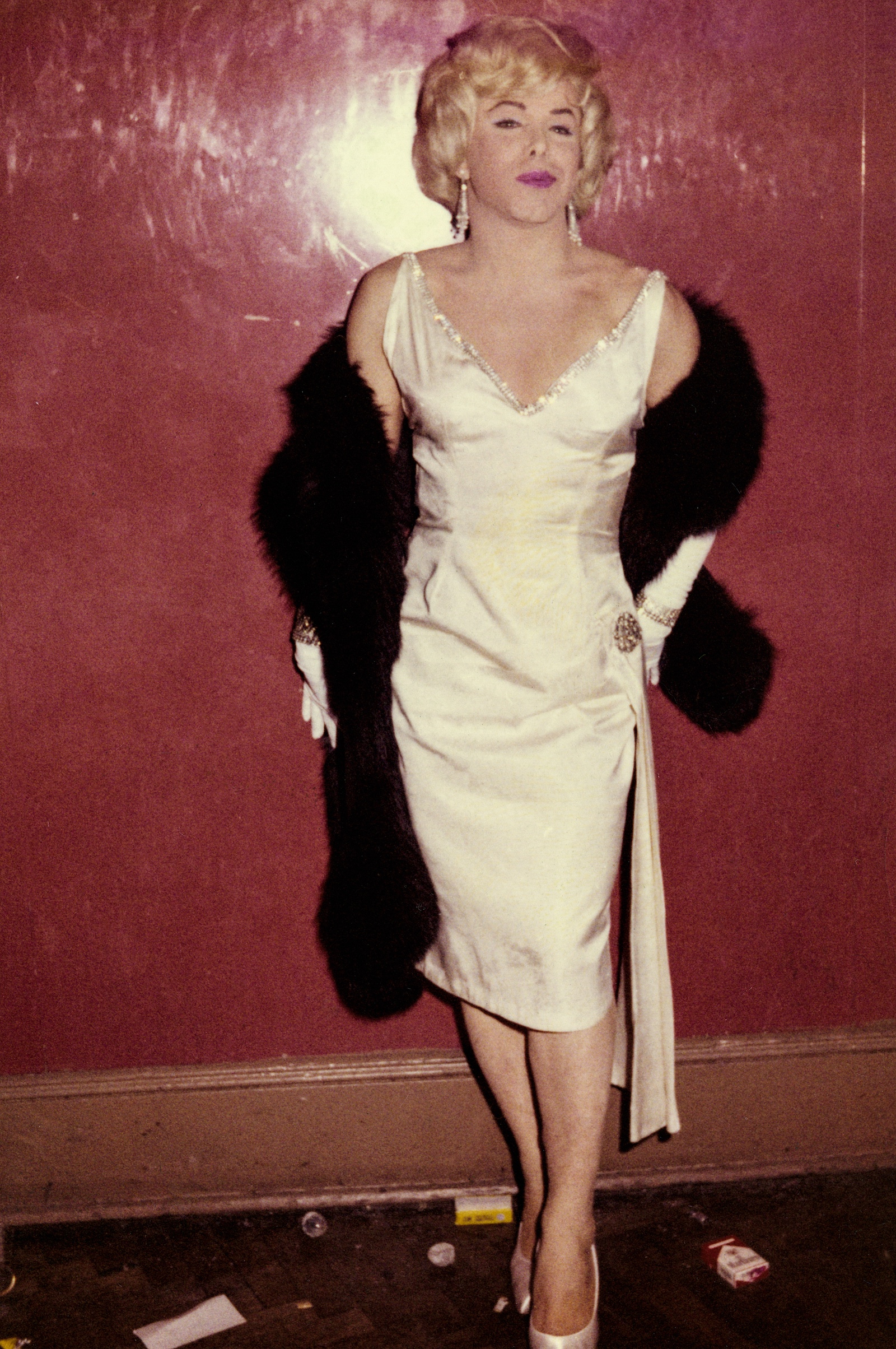 Behind the scenes at the cabaret, Kodachrome, United States, circa 1960. 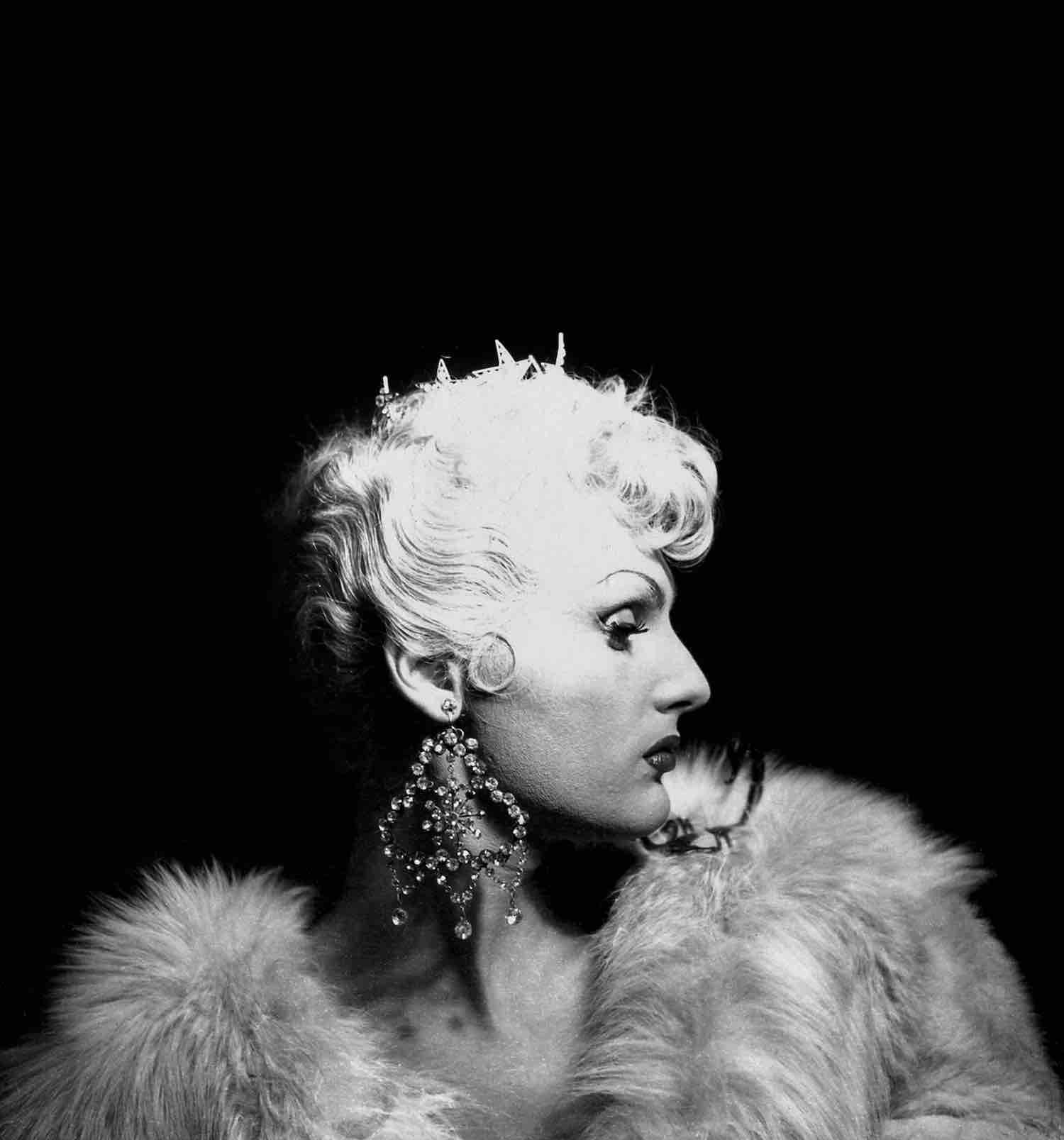 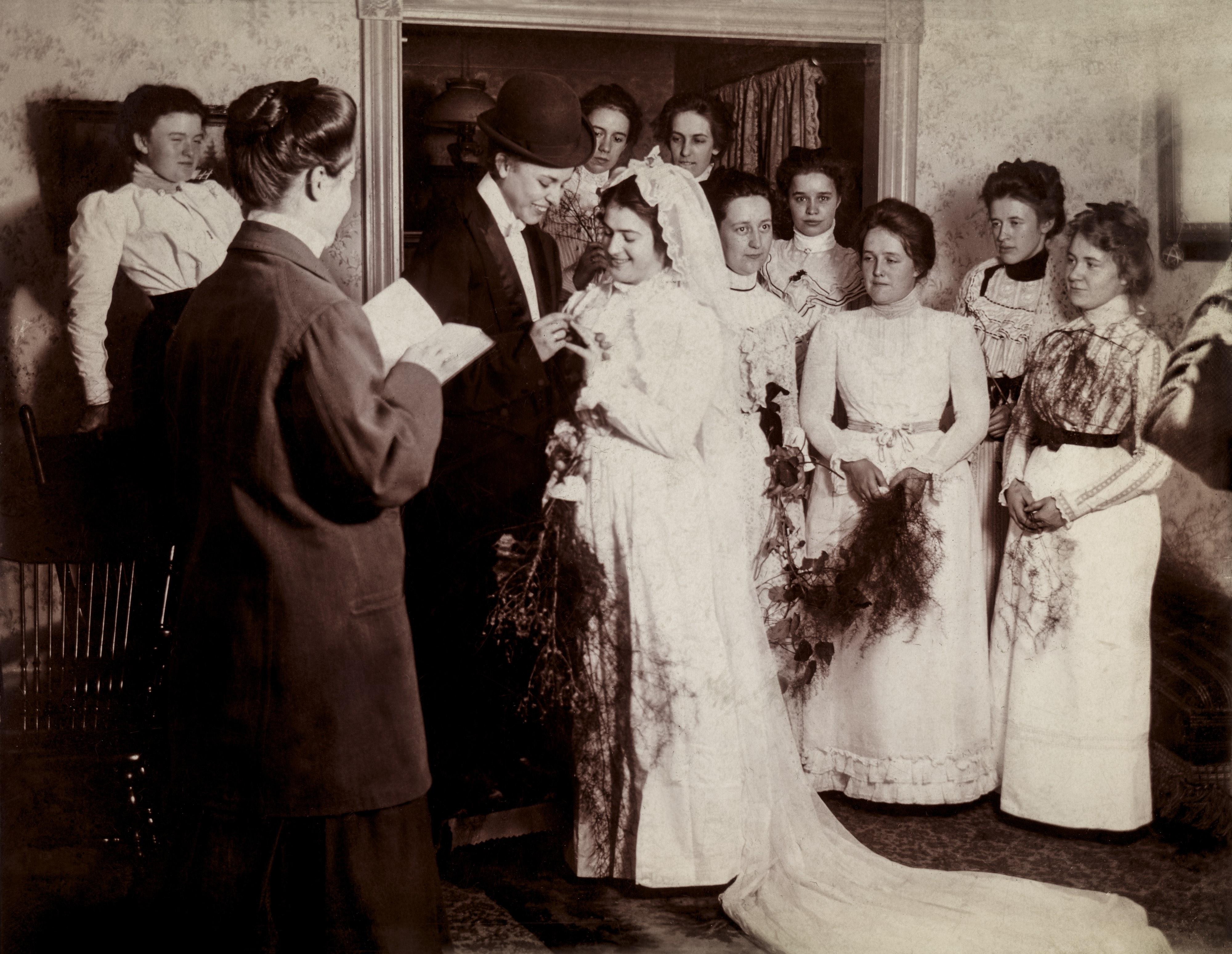 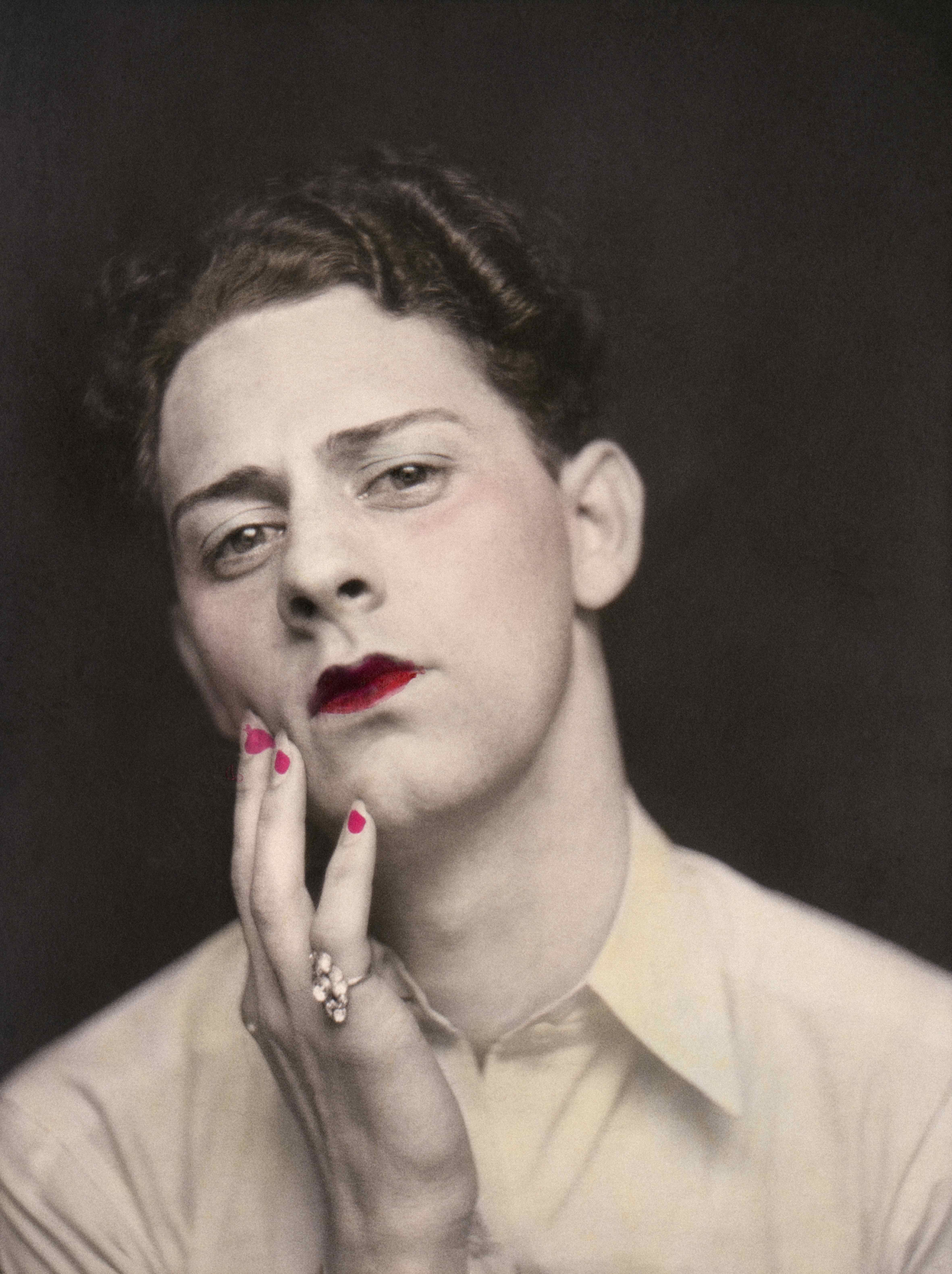 Man in makeup wearing ring. Photograph from a photo booth, with highlights of colour. United States, circa 1920. 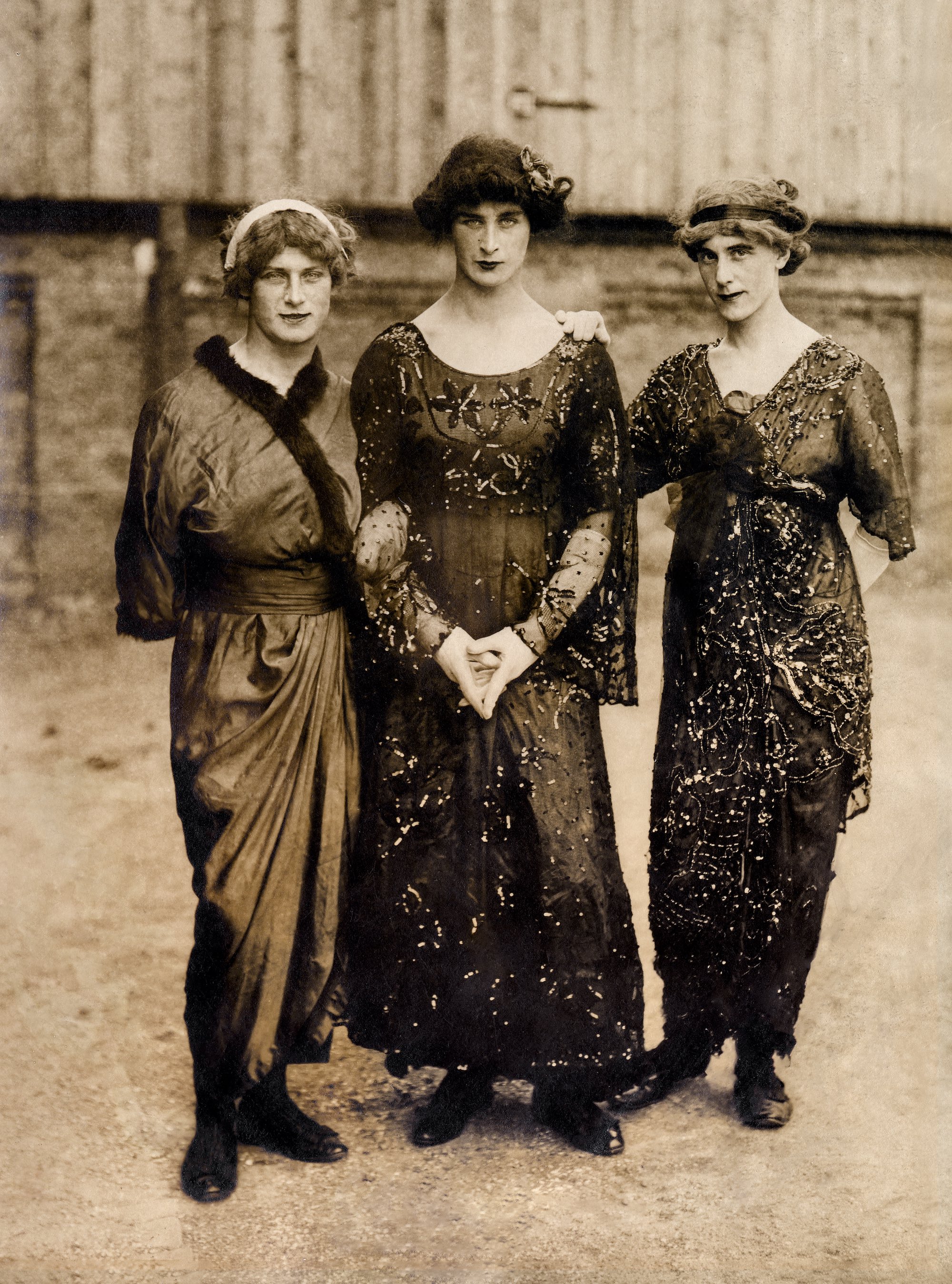 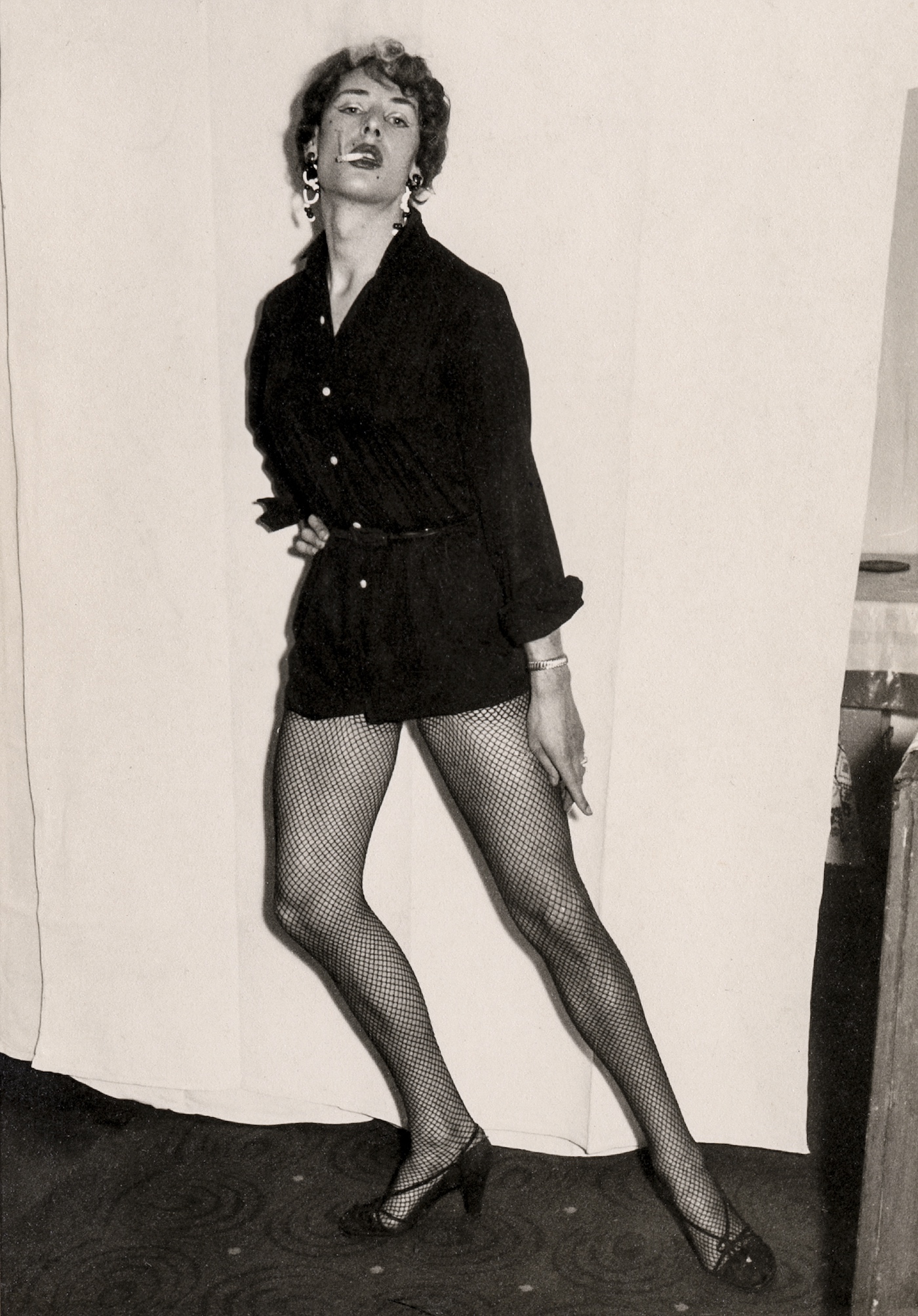 Man dressed as a woman, Mannheim, Germany, circa 1960. 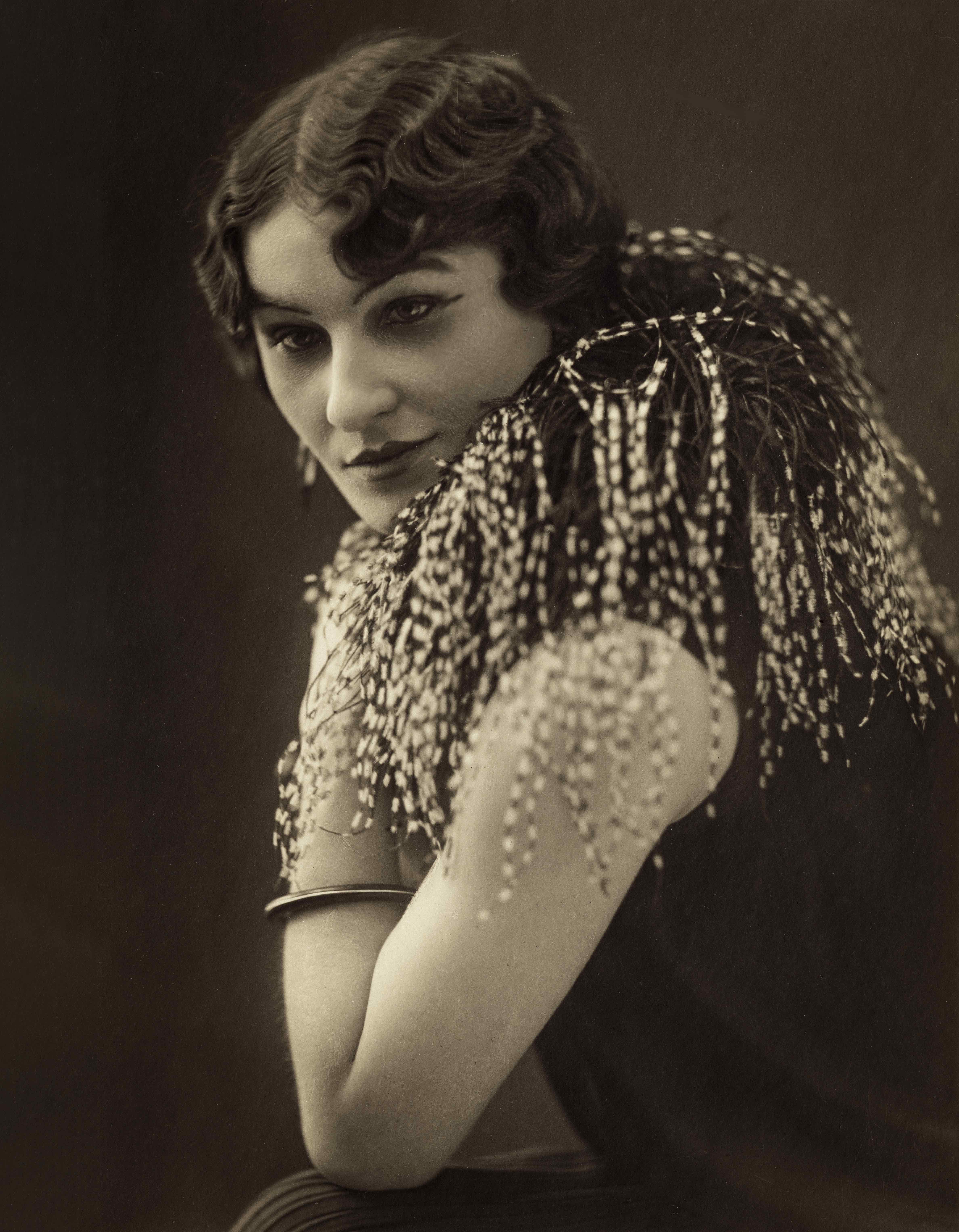 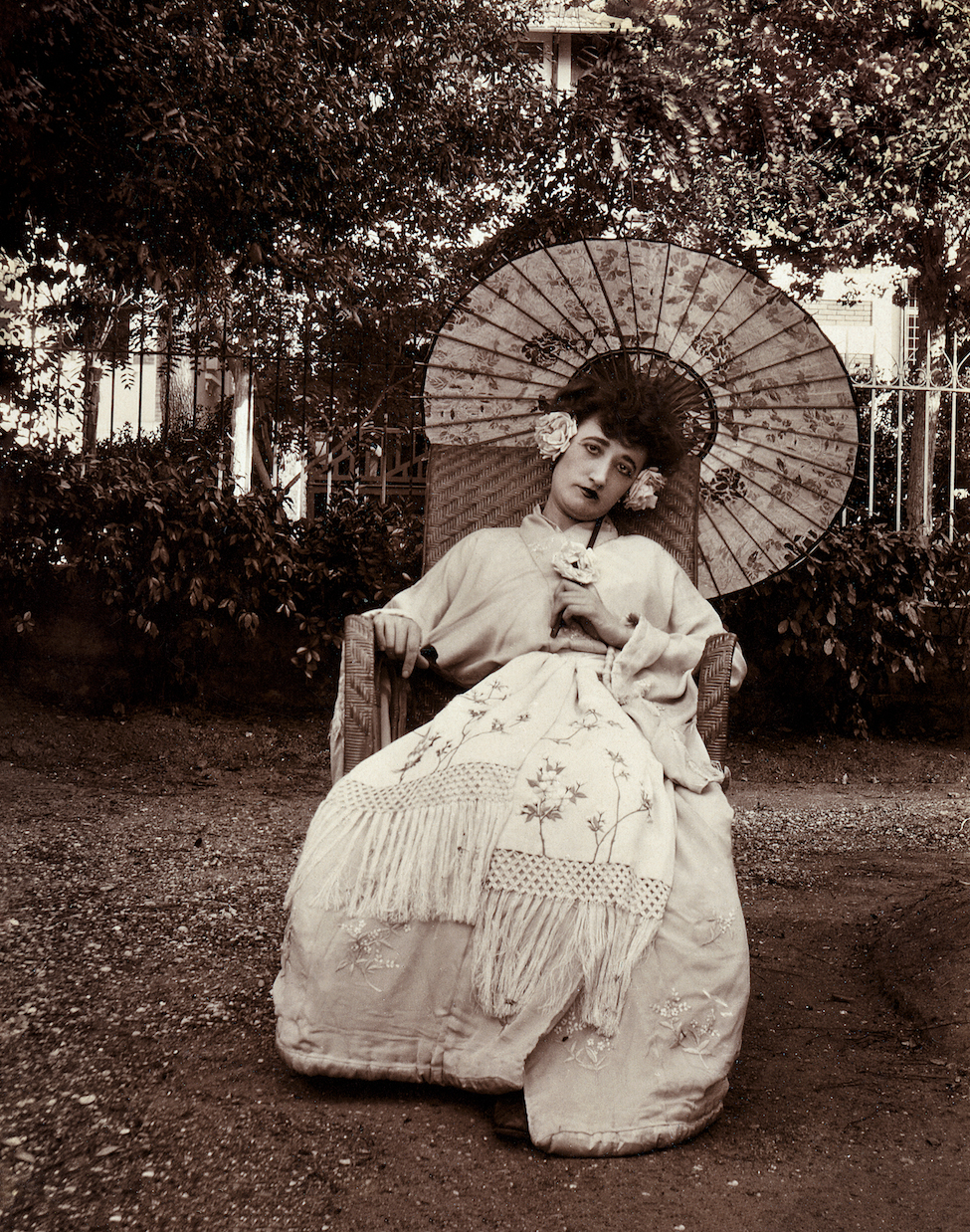 Under Cover: A Secret History of Cross-Dressers runs at London’s The Photographer’s Gallery from February 23 to June 3, 2018.

Linkedin
RELATED ARTICLES
OTHER ARTICLES
Over the weekend, London locals came together to resist a pre-planned police raid targeting delivery drivers.
After news broke last week around an expected reversal of the 1973 landmark law that made abortion legal in the US, protestors gathered in the UK in support of American women.
In our first OFFF Dispatch piece, the Arce Studio founder shares her tips on standing out from the crowd.
The revered showbiz chronicler recalls his journalistic beginnings, documenting subcultural scraps in the ’80s.
While protests over abortion rights rage in the US, access to abortion services is still almost nonexistent in parts of the UK.
Photographer Robin Graubard’s debut book offers an unflinching record of turbulence and change across the Balkans.