Art & Culture / Photography / The Travel Diary: A snapshot of life among the Sahara’s scorching sands 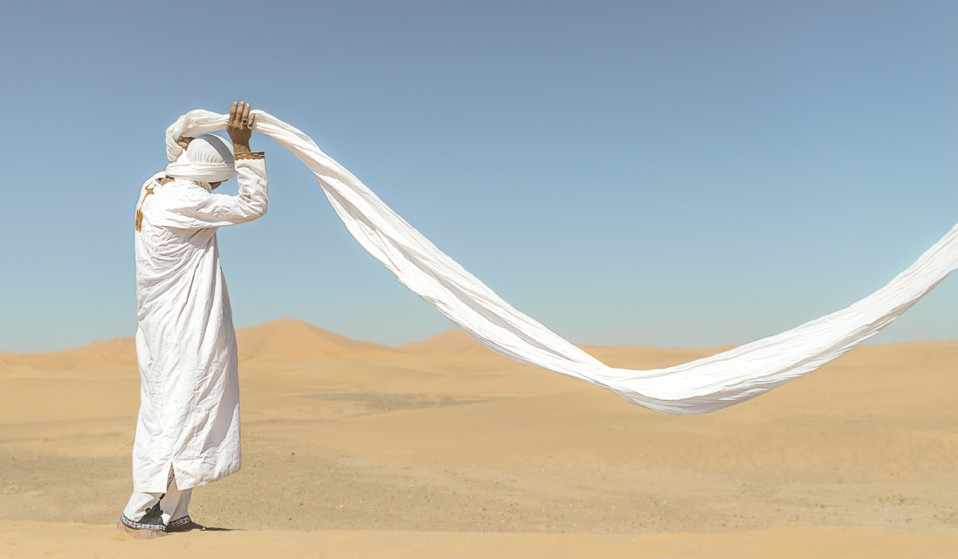 Two million nomadic Berber and Arabic people live in the Sahara. Photographer Mark Leaver explains how to experience their unique way of life.

Two million nomadic Berber and Arabic people live in the Sahara. Photographer Mark Leaver explains how to experience their unique way of life.

The Sahara desert spans eleven countries, covering over three and half million square miles, the majority of northern Africa. The rolling sand dunes and immense flats of the largest hot desert in the world are also home to an estimated two million nomadic Arabic and Berber folk, who’ve long built their lives in this inhospitable terrain.

From Morocco, the first step to get yourself into the Sahara is to rent a car in Marrakesh (assuming you don’t want to go with a large tour group; if you do, stop reading now). From Marrakesh, you take the patchy and largely unpaved roadways which snake their way through Morocco’s Atlas mountains. The mountain range cuts across Morocco from Agadir on the west coast to Errachidia in the east, where the rocky peaks gently fade into the Sahara. Two full days of agonisingly slow driving later, you’ll get to Ouarzazate, known as the ‘door of the desert’. This is where the barren Sahara begins. 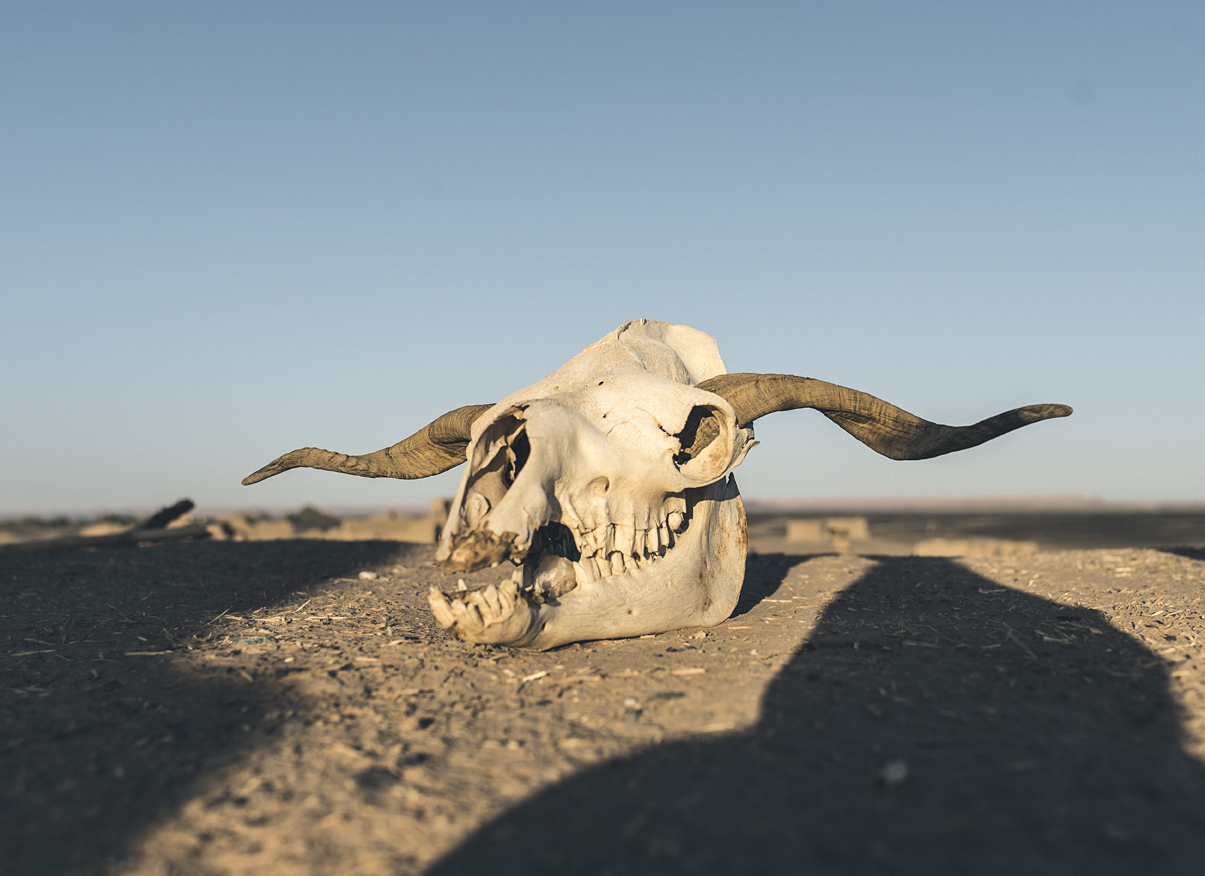 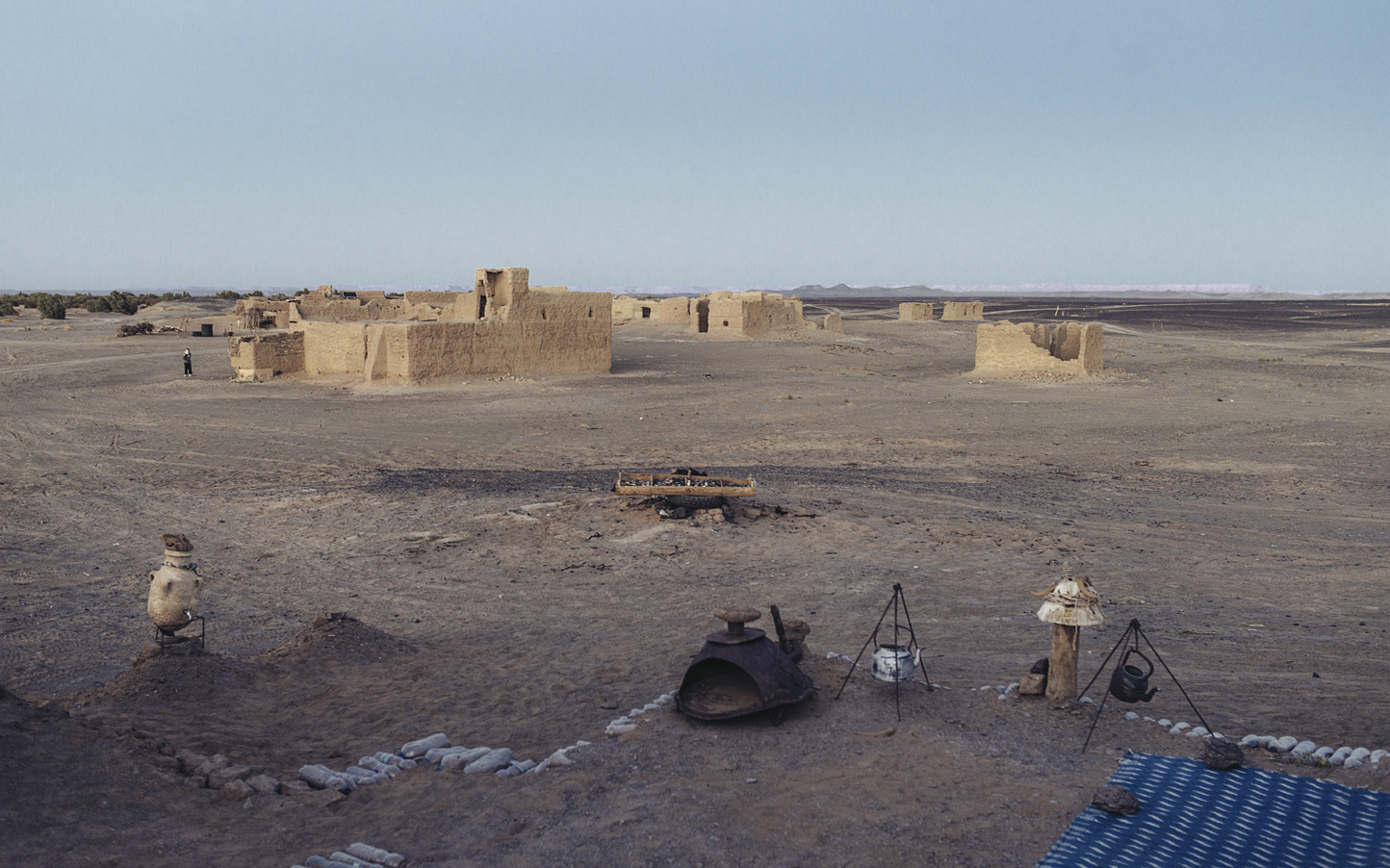 The picturesque landscape that surrounds Ouarzazate has played as a backdrop to countless Hollywood films, from Laurence of Arabia to Gladiator. Once you leave the town behind, you’re into the Sahara proper, but the iconic rolling desert sand dunes are still another two scenic days drive away to the south east.

Once you reach Merzouga, a village about fifty kilometres from the Algerian border, make sure you don’t fall victim to the first local who tries to take you to his hotel. Be savvy and shop around a bit to find the best deal.

A solid, in-between transport option involves riding out on camelback into the dunes for two days, with a guide to help you and your camel navigate the contoured maze of dunes. After a full day of camel riding from Merzouga, you’ll reach the edge of the sand and find yourself in the Sahara’s immense flats. 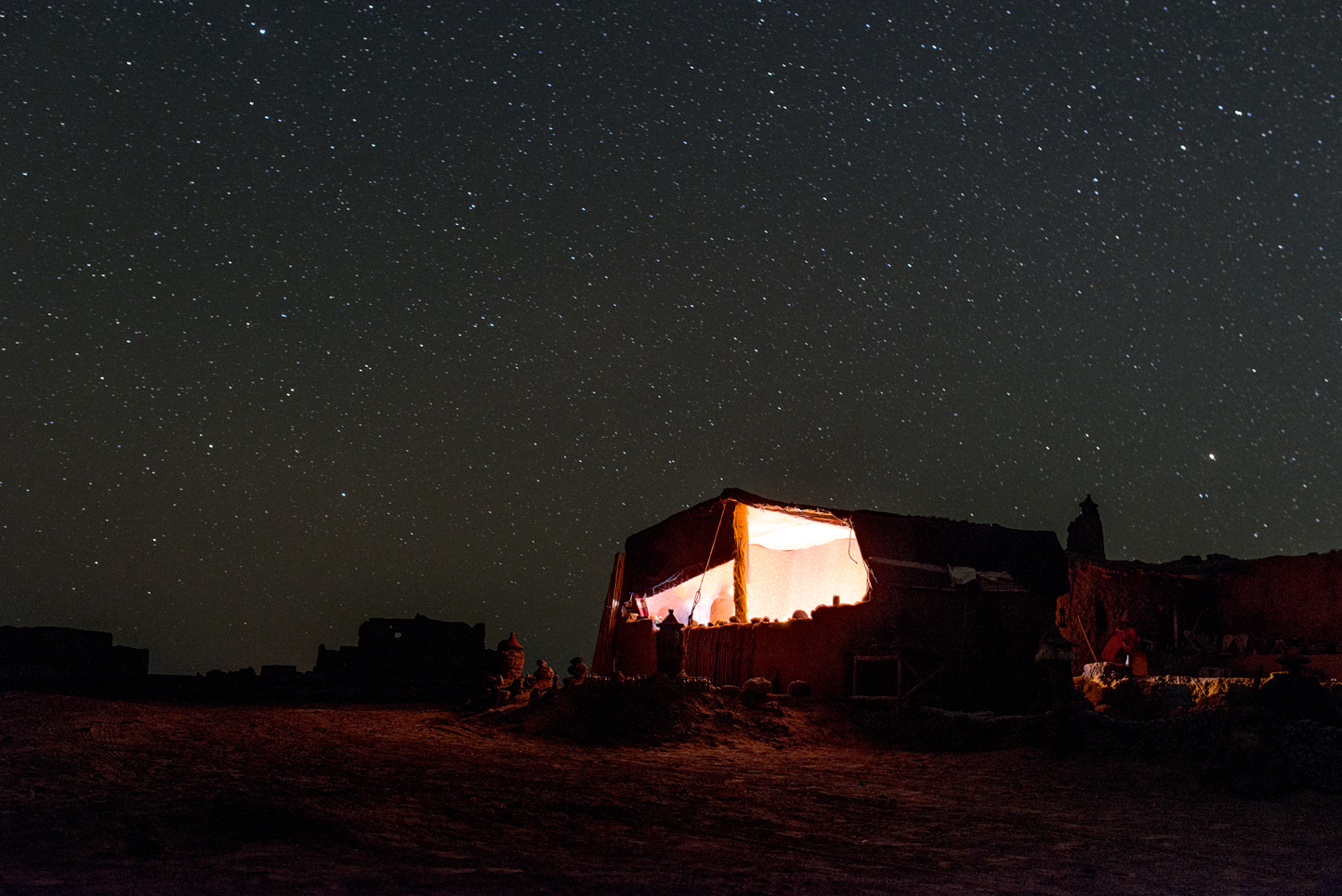 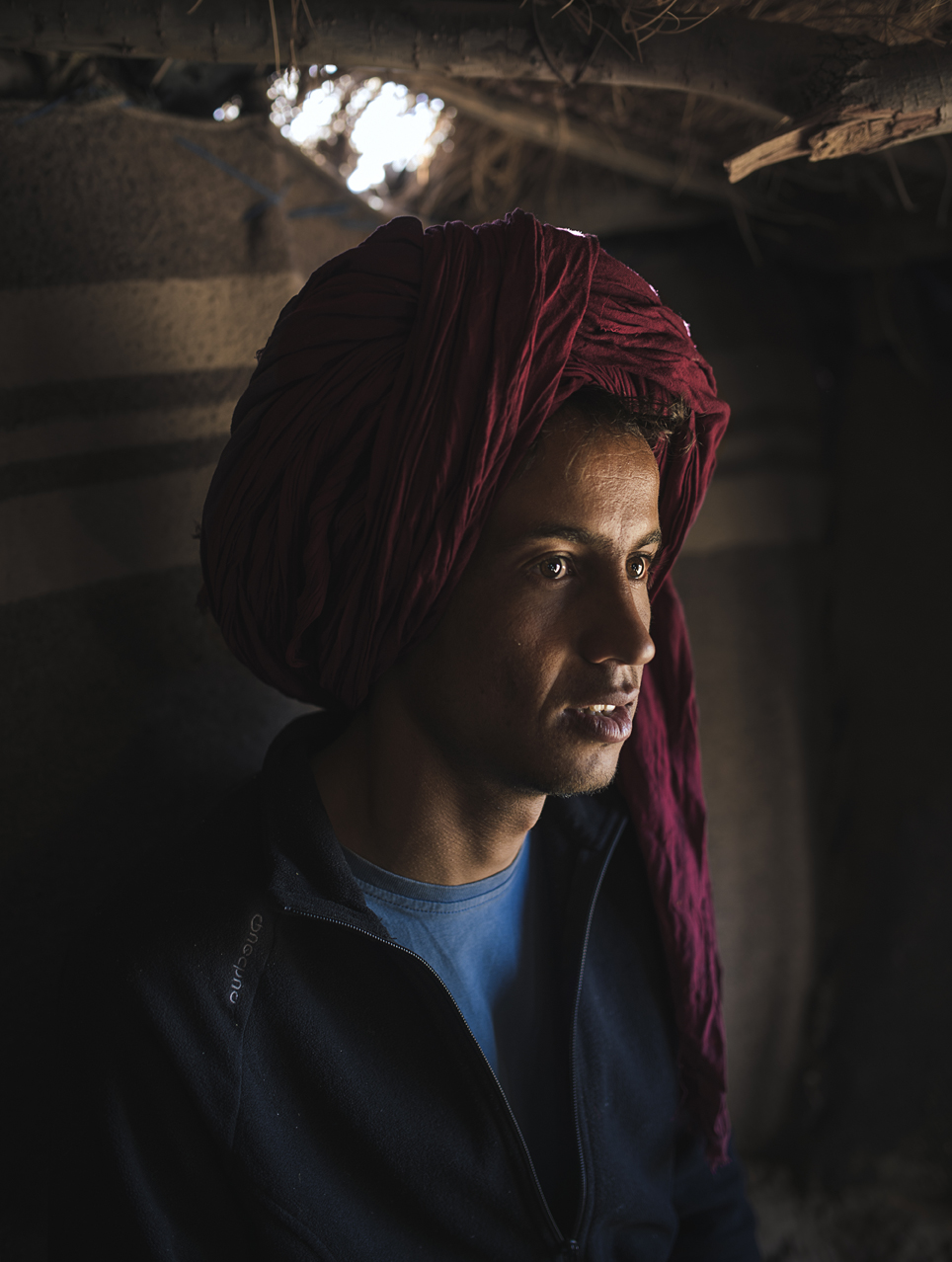 Look up ‘desert’ in the dictionary and you’ll find it defined as: ‘A barren or desolate area, especially dry, often sandy region of little rainfall, extreme temperatures, and sparse vegetation’. It’s not just about the sand. Here you’ll see cliffs on the horizon which mark the Algerian border. Once an open border, it’s now monitored constantly by the army to suppress criminal activity, there’s a four kilometre stretch of ‘no man’s land’ which separates the Moroccan and Algerian frontiers.

Venturing out into the flats for a few hours, you’ll notice that odd shapes emerge from the distance. On closer inspection, the ambiguous mirages transform into homes built out of the Saharan rock and earth, which blend seamlessly into the environment. These homes belong to desert nomads, who choose to live a life of solitude. Their homes are no closer than one kilometre apart and tend to come in clusters of between two and five. 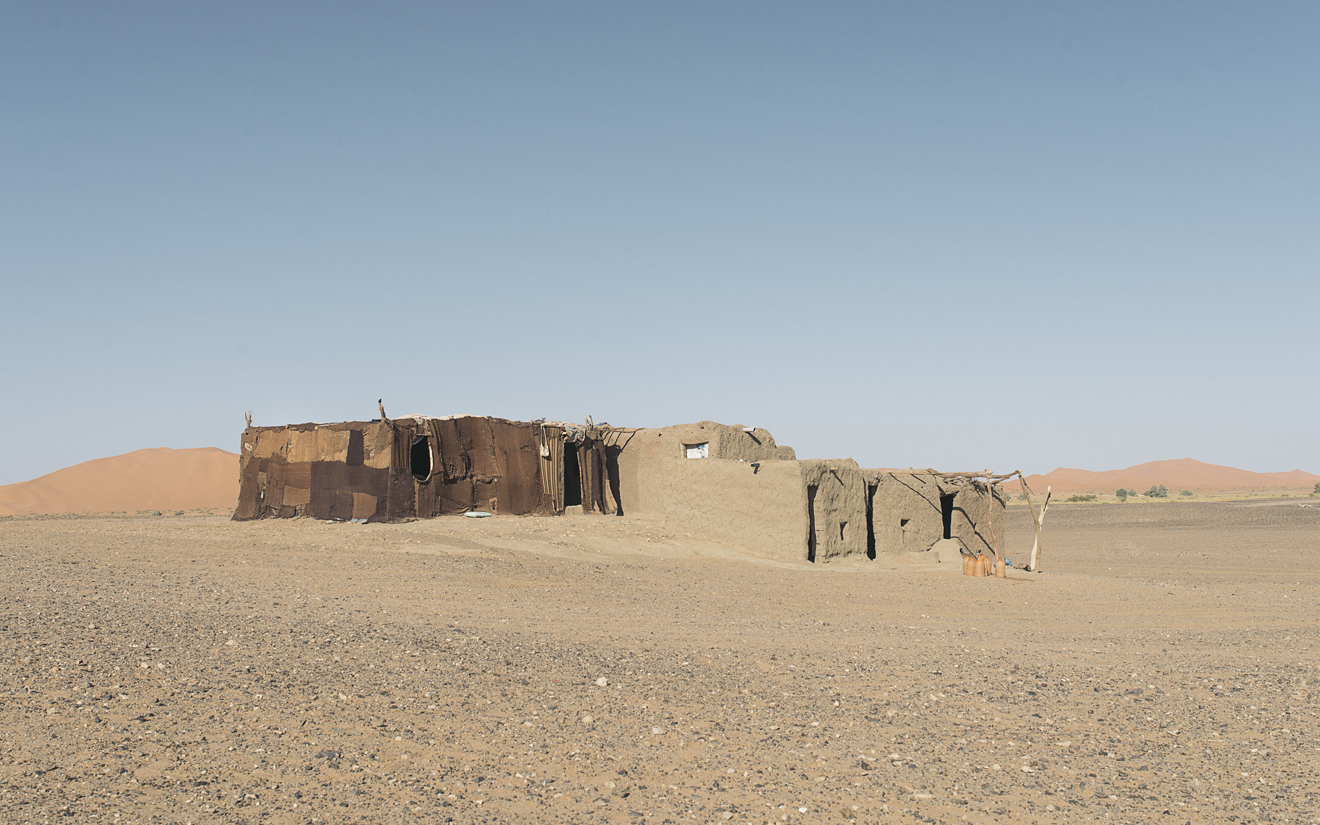 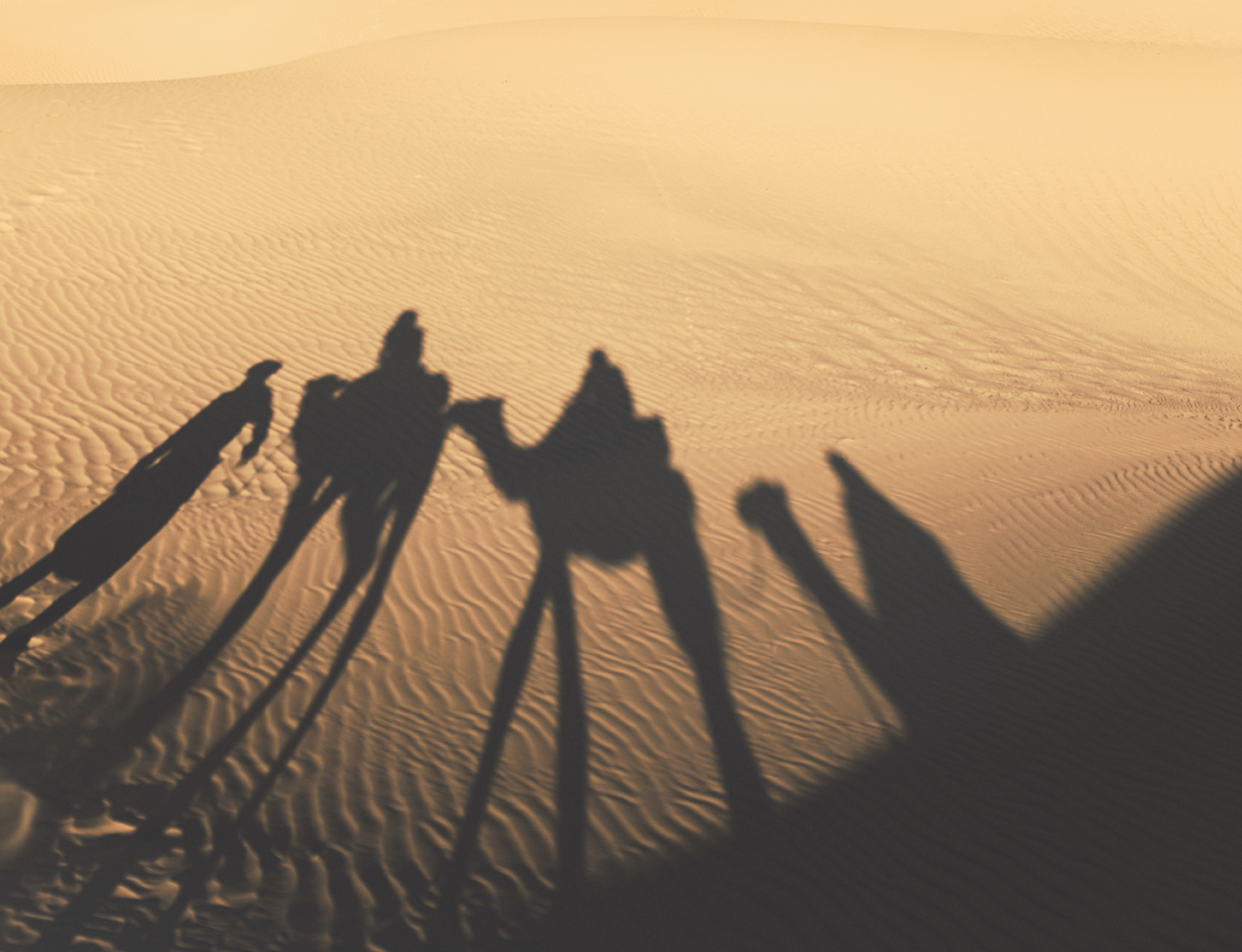 There’s no guarantee that you’ll be taken in for the night. It’s not possible to book in advance out here. But if you’re lucky, you’ll find someone willing to put you up. A small tip goes a long way and will secure you blankets and a home-cooked meal, most likely a traditional tagine.

Before long, after you’ve settled into your camelhair tent or desert hut, night will descend and you’ll play witness to one of the best night skies the earth has to offer. A haze of crowded stars appear from the darkness, creating the panoramic band of the Milky Way, spanning the night sky 180 degrees from horizon to horizon. The next morning you’ll be woken up by the sun rising over the flats.

After getting the day’s water for you and the camels from the closest well, you’ll push on through the flats via the dunes, in the direction of your next night’s camp. 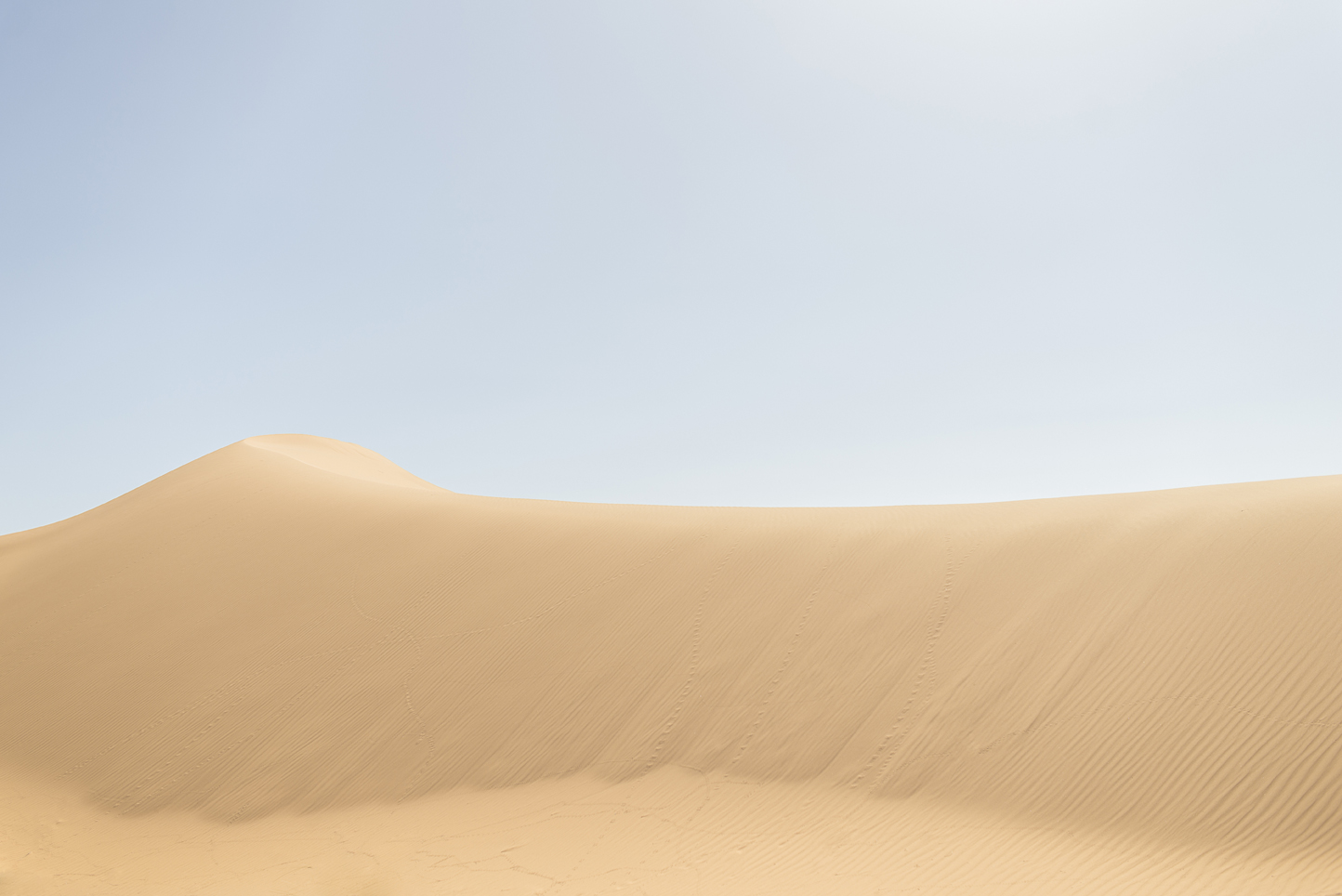 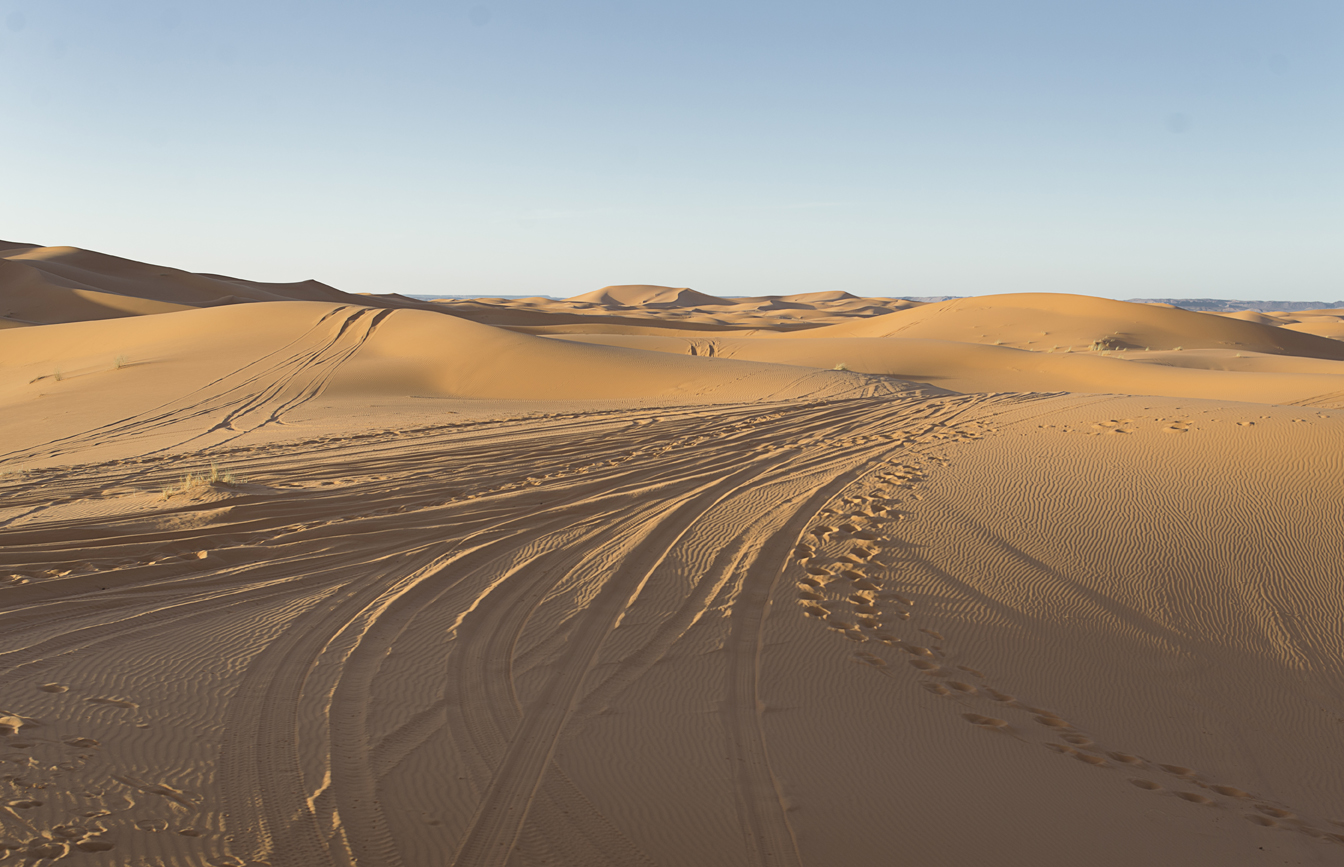 As you spend another day in the Sahara, the disregard for the natural beauty of the desert will become more and more apparent. There is a distinct lack of protection and law in the Sahara; it’s not a registered national park or anything along those lines. Protection is overlooked, due to the scarceness of both human and animal here. This leads locals and international travellers to destroy the majesty of the dunes with 4x4s, dirt bikes and fly tipping. It’s hard to enjoy a sunrise over the dunes when you can hear the roar of engines and see the motorway of tire tracks through the dunes.

This isn’t to discourage anyone from going. The Sahara desert is a truly amazing and unique landscape, like no other in the world. However, think again if you’re after a truly authentic experience that aligns with your romantic image of the desert drawn from films and novels.

The Sahara is changing. Westernisation is making the world smaller and diminishing nomadic lifestyle as it advances through the sands. We now live in an age where desert nomads ask for your Facebook. And on taking a second glance, you might just spot that your nomadic host is actually wearing a pair of Nike Airmax 90s. 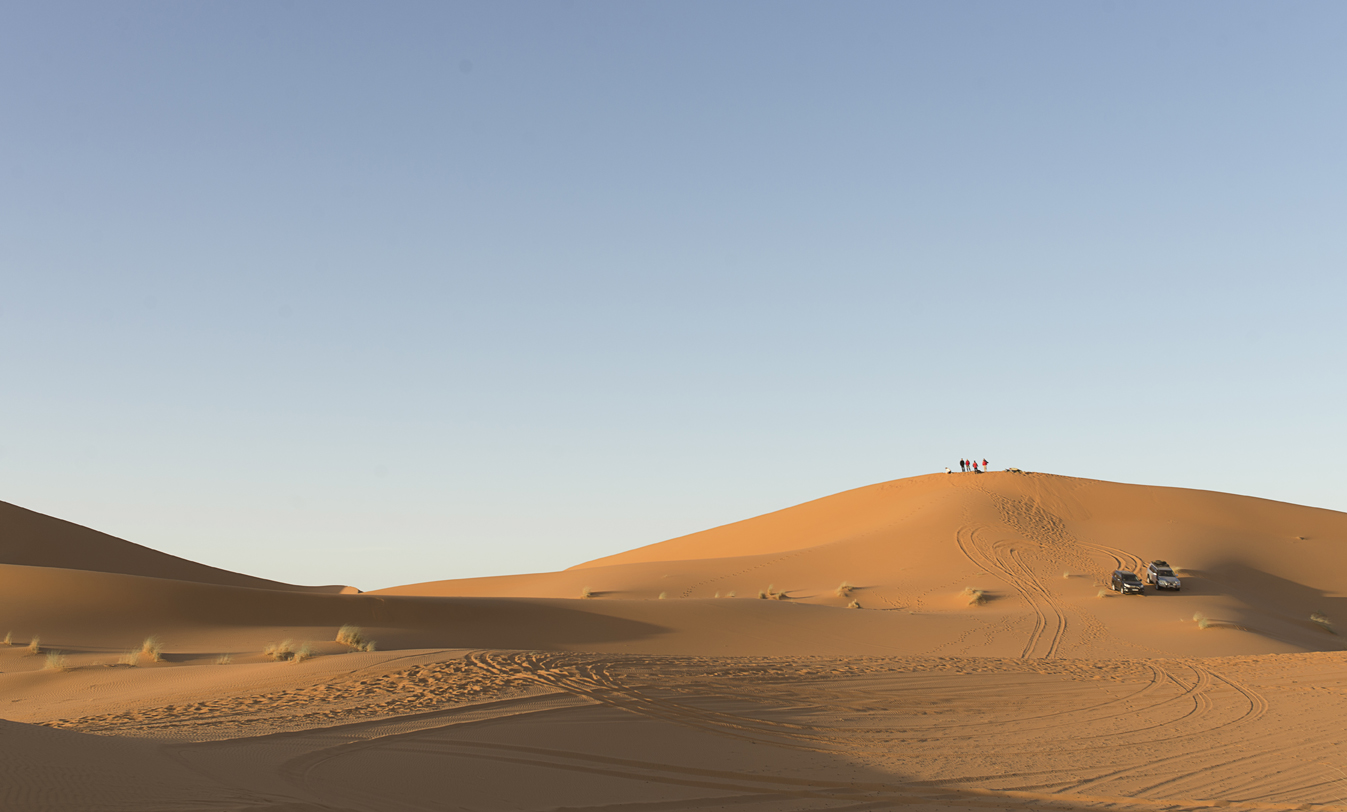 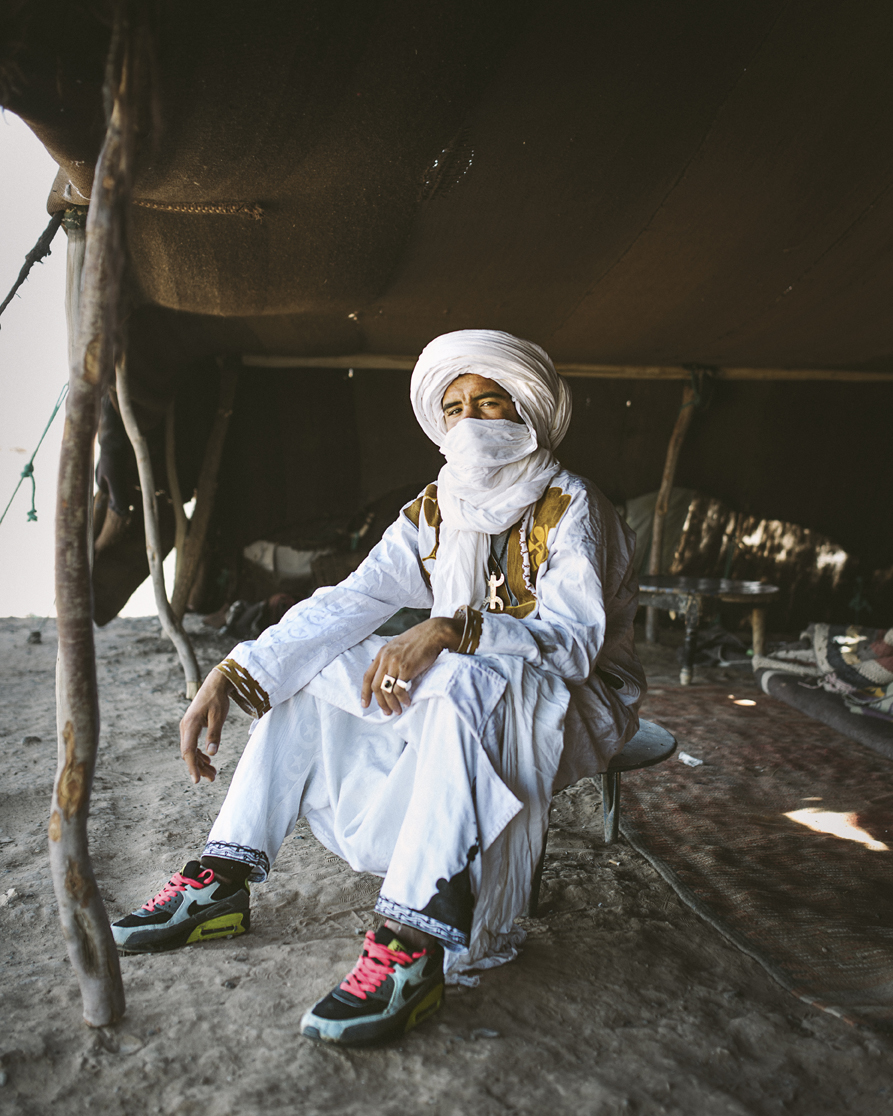 Linkedin
RELATED ARTICLES
OTHER ARTICLES
In his 2008 series, the photographer pictured himself as Angela Davis, Martin Luther King Jr., Malcolm X, and other prominent figures.
A 37-year-old woman shares how her abortion led her to become a clinic worker, and the abuse she’s received in that role.
As the Scottish government announces a rent freeze, an activist with Living Rent who fought and won shares how they did it, and what must come next.
Thousands attended the annual event this year to wheelie through the city and call for ‘knives down, bikes up’.
Rogue landlords are exploiting young and inexperienced renters and leaving them in mental and financial turmoil, reports Niall Hignett.
Rhiannon Adam spent three months capturing an ageing society wracked by division, isolation, and the aftermath of scandal.