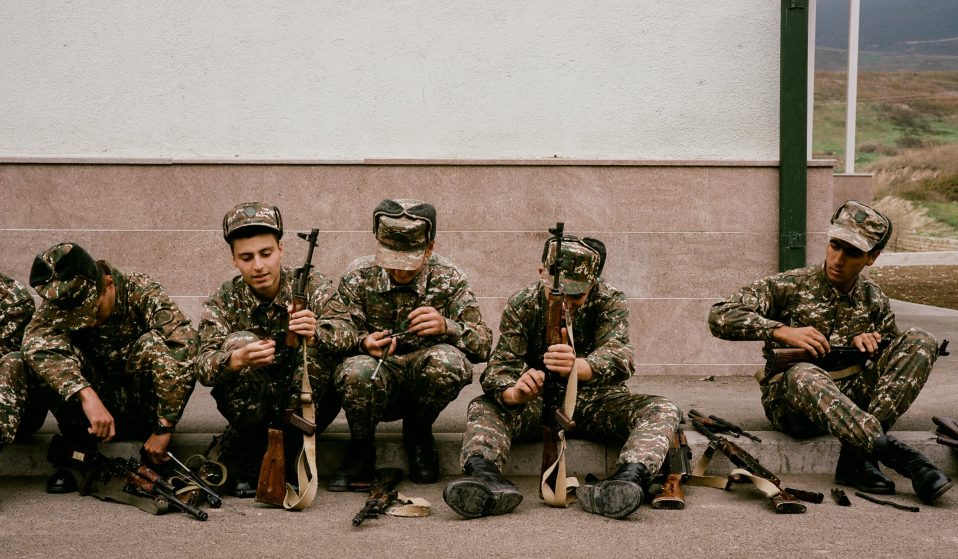 In his dark and atmospheric new project, The Karabakhians, photographer Gus Palmer documents the underreported conflict between Armenia and Azerbaijan.

In his dark and atmospheric new project, The Karabakhians, photographer Gus Palmer documents the underreported conflict between Armenia and Azerbaijan.

Since the collapse of the Soviet Union in 1991, the landlocked enclave of Nagorno Karabakh in the South Caucasus has been the core of dispute between Armenia and Azerbaijan.

While its origins stretch back to the early 20th century, the current conflict began in 1988, when the Karabakh Armenians demanded independence from Soviet Azerbaijan. Tensions mounted into a full-scale war in the early ’90s, before a shaky ceasefire was eventually signed in 1994.

Documentary photographer Gus Palmer was crossing from Georgia into Azerbaijan by night train when he first experienced the hostility between the two countries. 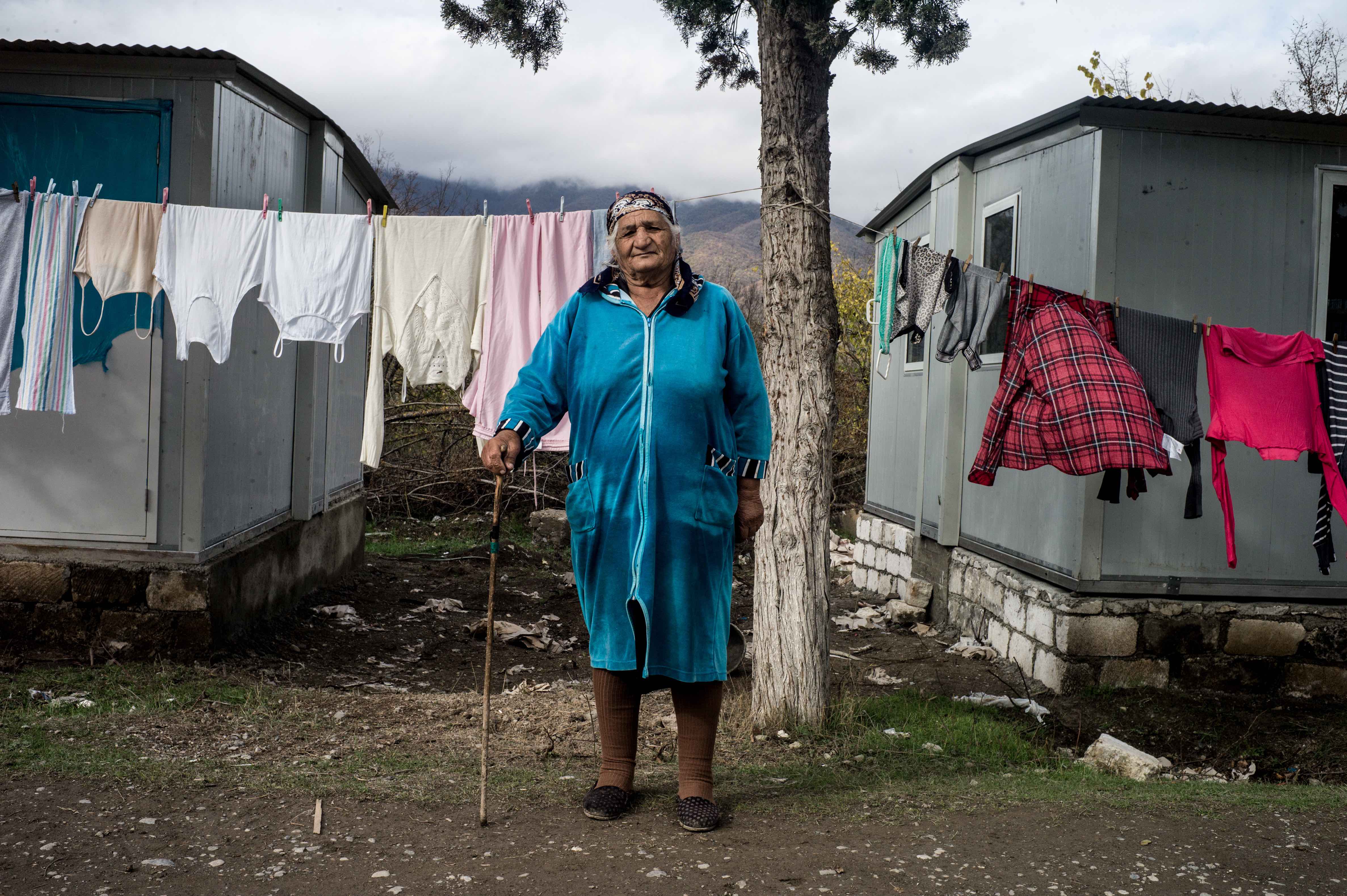 Marusya Babayan stands in front of her temporary accommodation in Alishan village, set up in the grounds of an old military hospital to house the residents of Talish whom fled the April war in 2016. She has still not been back to Talish, and says that the taste of the fruit is different here. November 2017

“Crossing the border at midnight, the Azeri authorities got on board to stamp our passports,” recalls Palmer. “And the only question before returning my passport was, ‘have you ever been or do you ever wish to I go to Armenia?’ I was fascinated by the hatred between the two countries after that.”

It was from here that Palmer began his photography project The Karabakhians, which saw him spend 10 days exploring the region. While on the ground, he worked with Armenian journalist Arman Gharibyan, who was able to help him communicate and get around.

During the 10 days, Palmer travelled to the frontline, where Armenian forces face Azerbaijan Armed Forces from trenches often compared to those used in World War l. 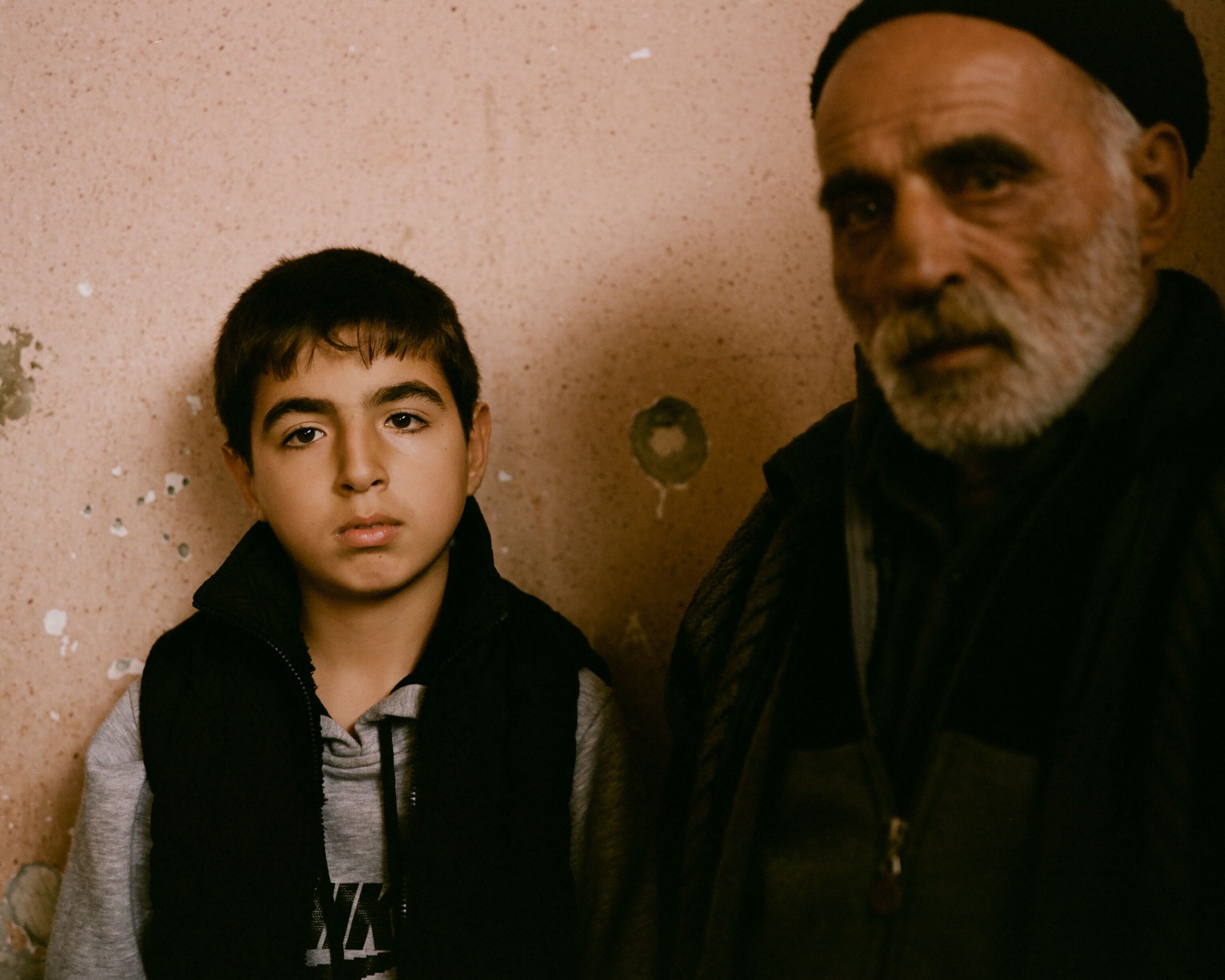 A young boy and his Granfather at their home in Matakert. The boy’s father was shot and killed early on in 2017 whilst at the frontline. November 2017

They also visited villages across the region meeting local people. “This is how we happened upon the mother of Levon, for instance, through meeting one person in the village and them recommending we visit the next person, and so on,” explains Palmer.

Asked how his experience of Karabakh matched up with his expectations, the photographer says: “It is always a surprise going somewhere where there is a military presence and seeing the simple things, such as cafes or children’s play parks. In a very cliche way, even though I was slightly expecting it and looking for it, the way in which life continues is always a surprise.” 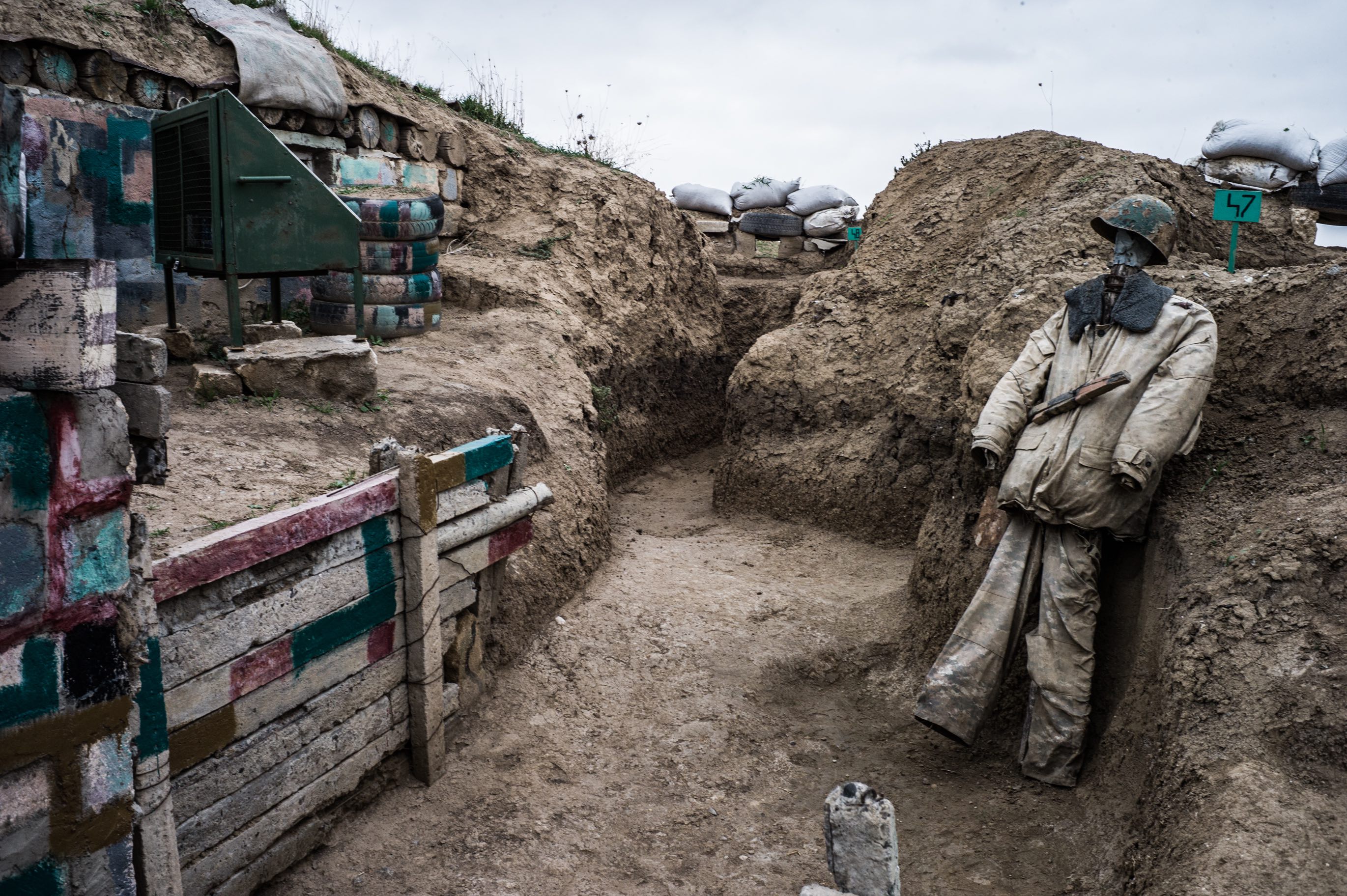 A view of the trenches from a frontline position in the Martuni region of Nagorno Karabakh.

As Palmer only had a limited number of days to work with, finding time was the main challenge. “As with most self-funded projects, I find it is always a strain to get an adequate amount of time to actually shoot,” he says. “In 10 days, it is very difficult to get a proper understanding of each of the stories I wanted to tell.”

“It is, however, something I am going to revisit, and hopefully over the coming years I will create and develop a well-rounded body of work.”

Ultimately, the message Palmer hopes to convey is that “even in a place that has been dominated by war for much of its existence, you can still find beauty.” 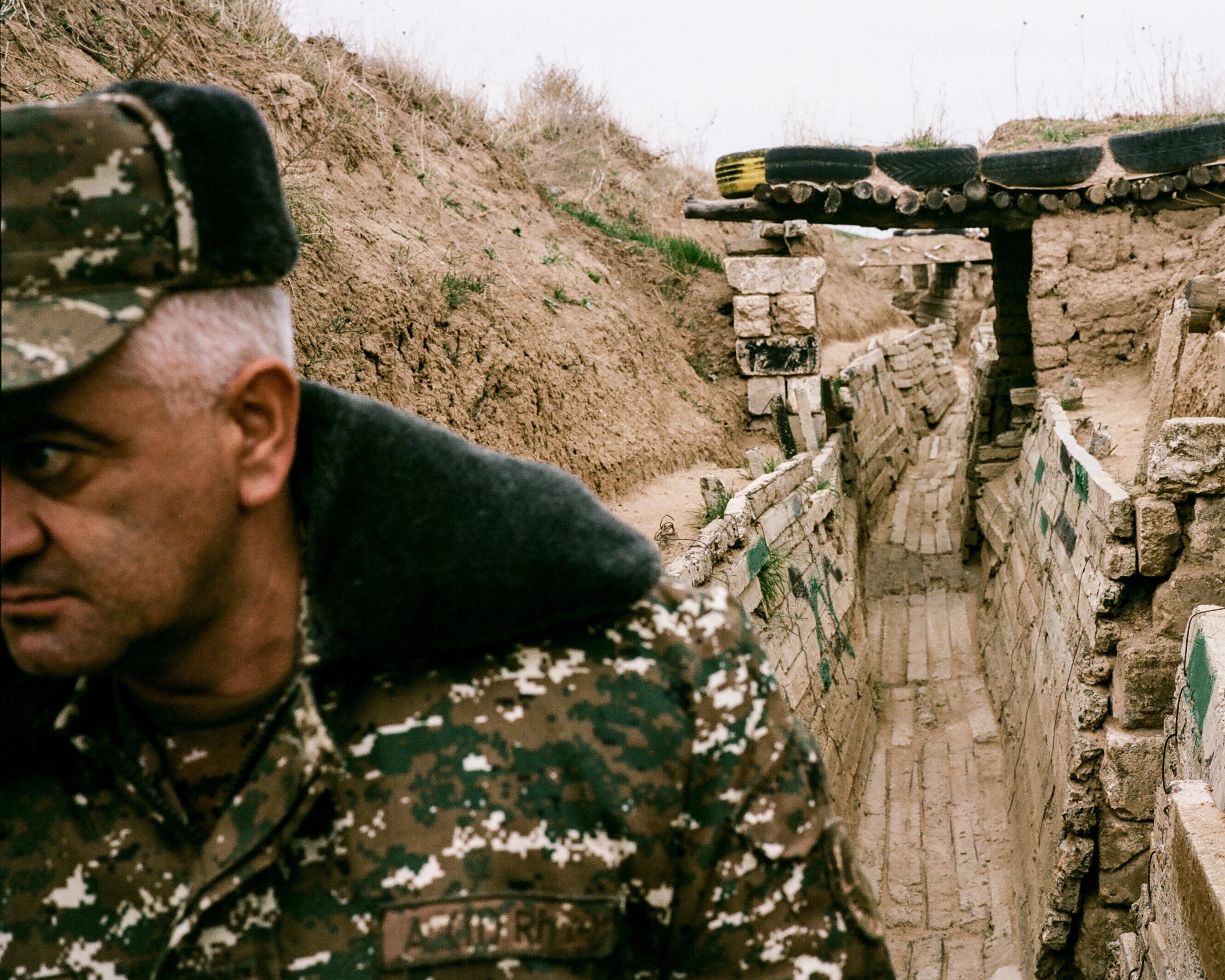 A commander visits the younger soldiers to boost morale on the front line in Martuni.    November 2017 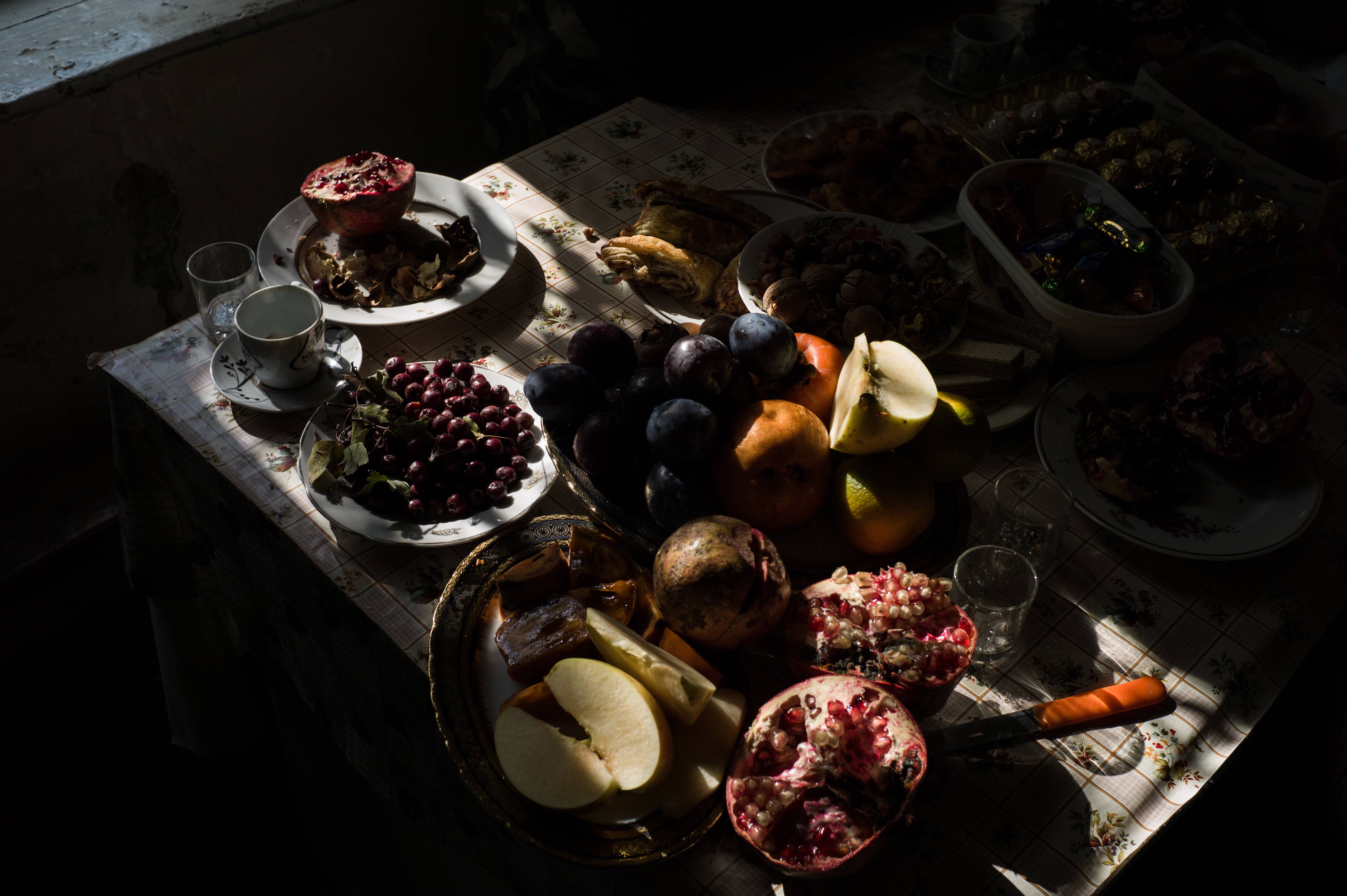 A breakfast spread at the Saliyans house, a village that neighbours Talish. Both in the line of contact. November 2017 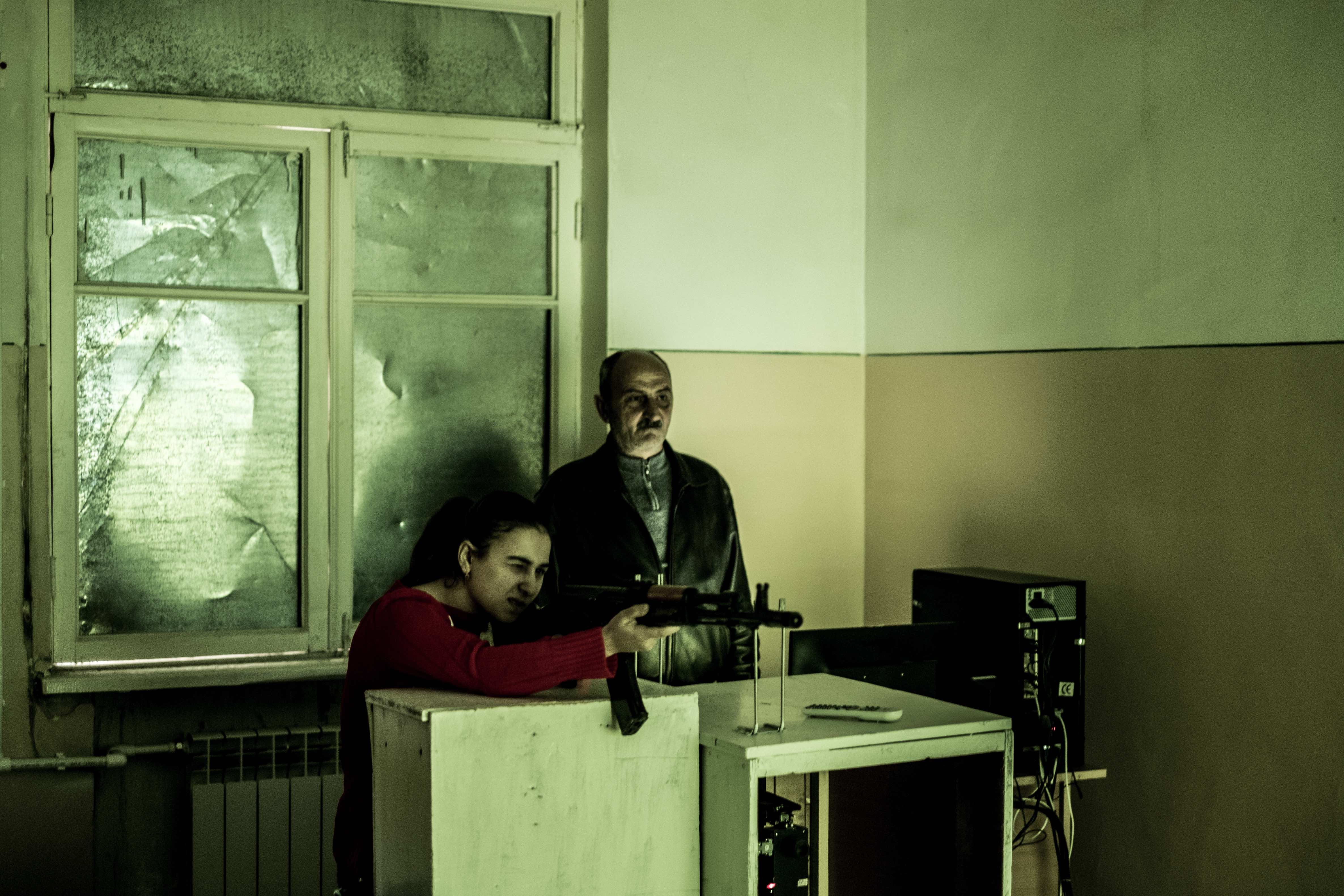 A student takes aim at a projected target in the primary school of Berdashen, it is mandatory for students to take target practice as one of the lessons at the school. November 2017 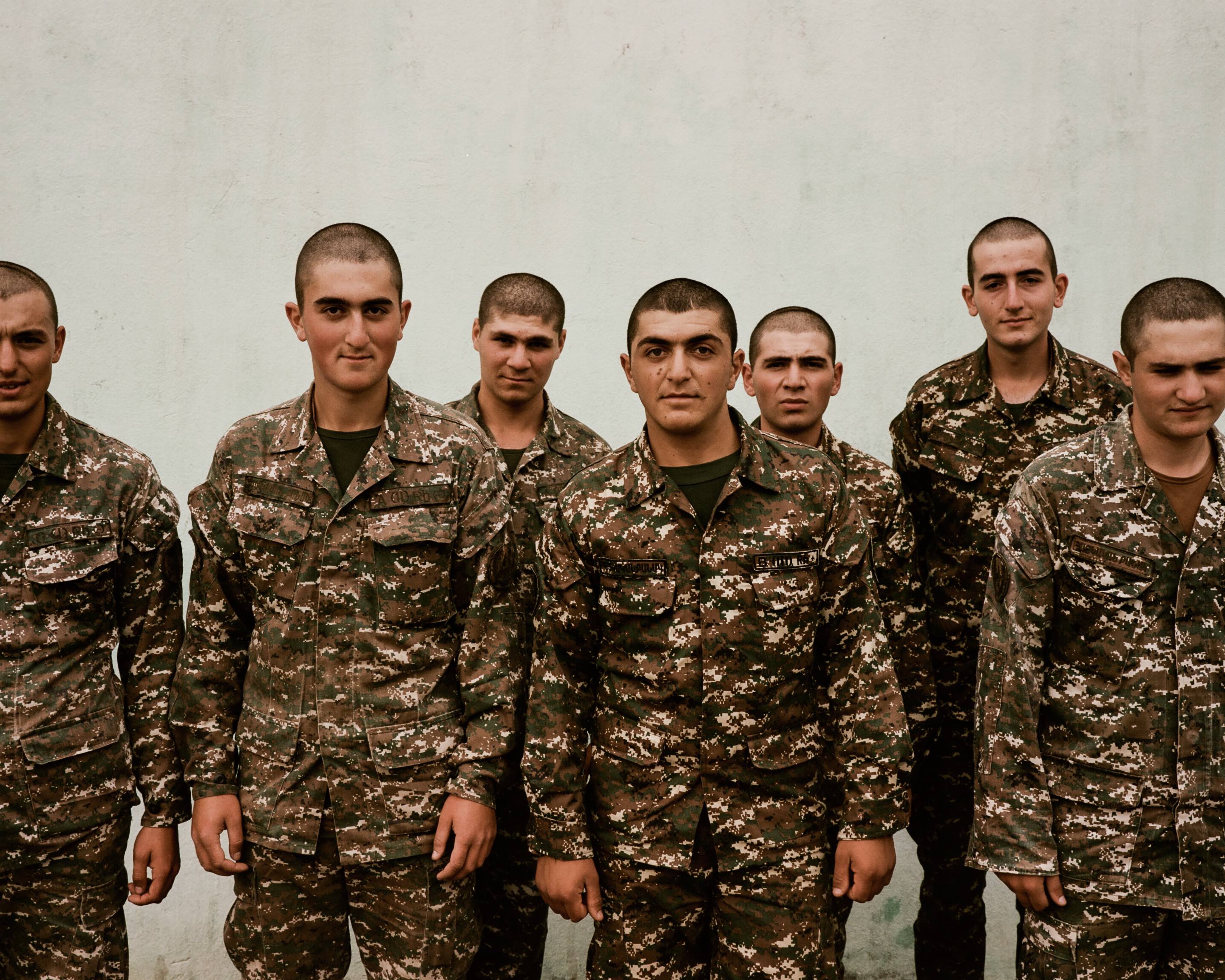 Conscript soldiers stand against a wall in a military base in the Martuni region of Nagorno Karabakh. All of Armenia’s eighteen year old males must complete two years of military service. November 2017 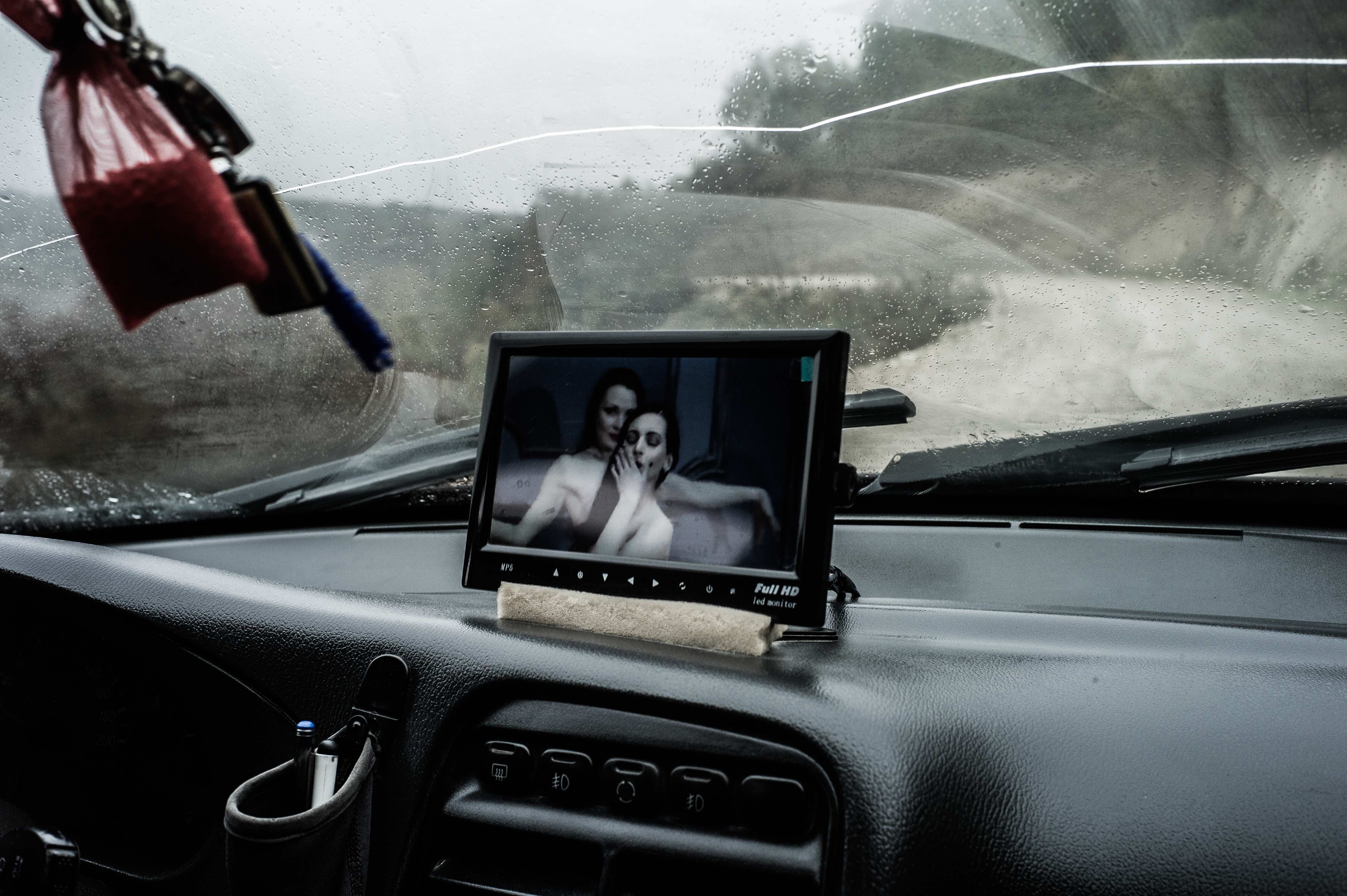 During a drive from Matakert to Talish, the driver of the taxi has a small screen that shows local music videos to the passengers. 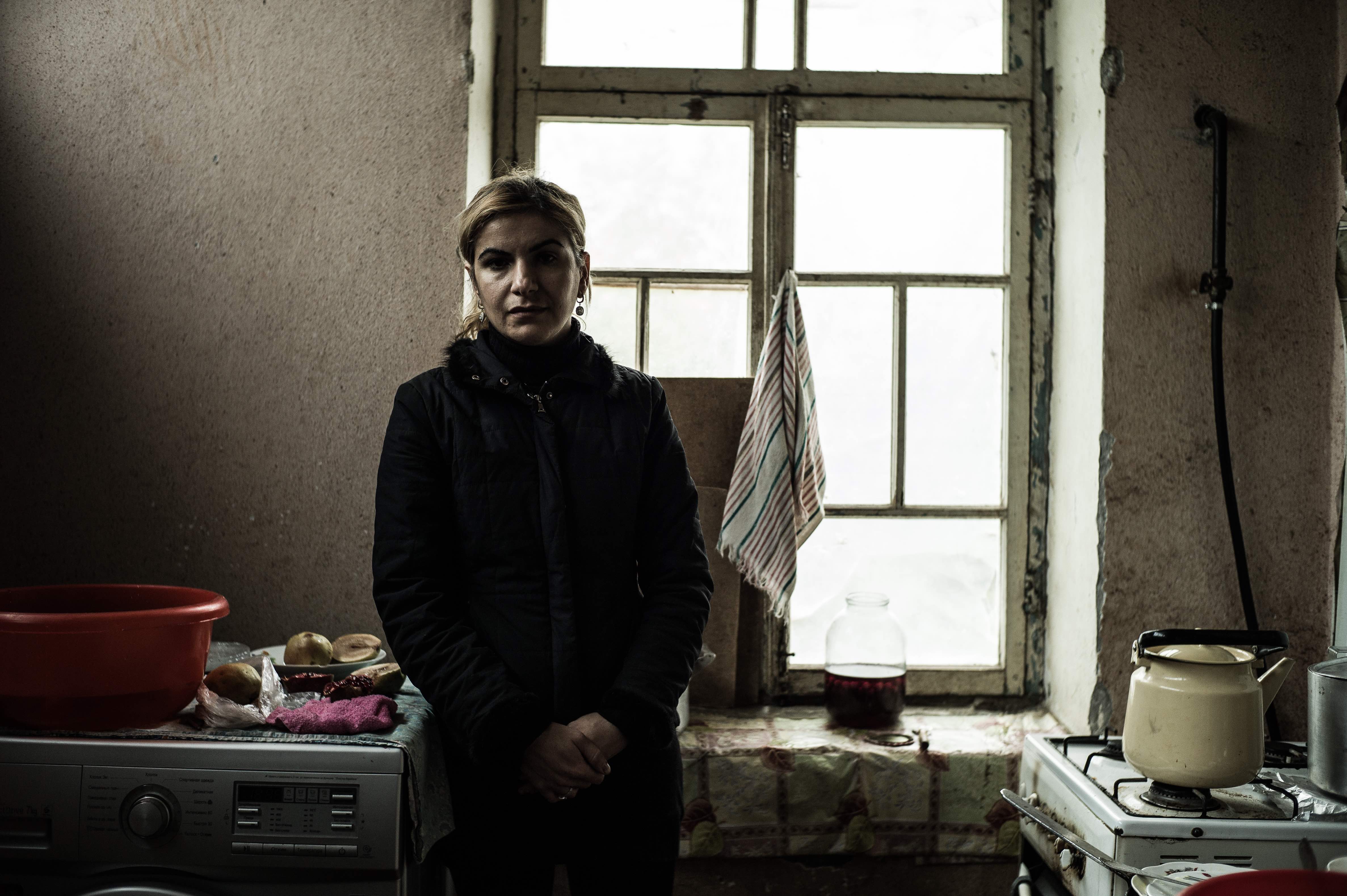 Anusha at home in Martakert, where she lives with her three children. Her husband was recently killed on the frontline. 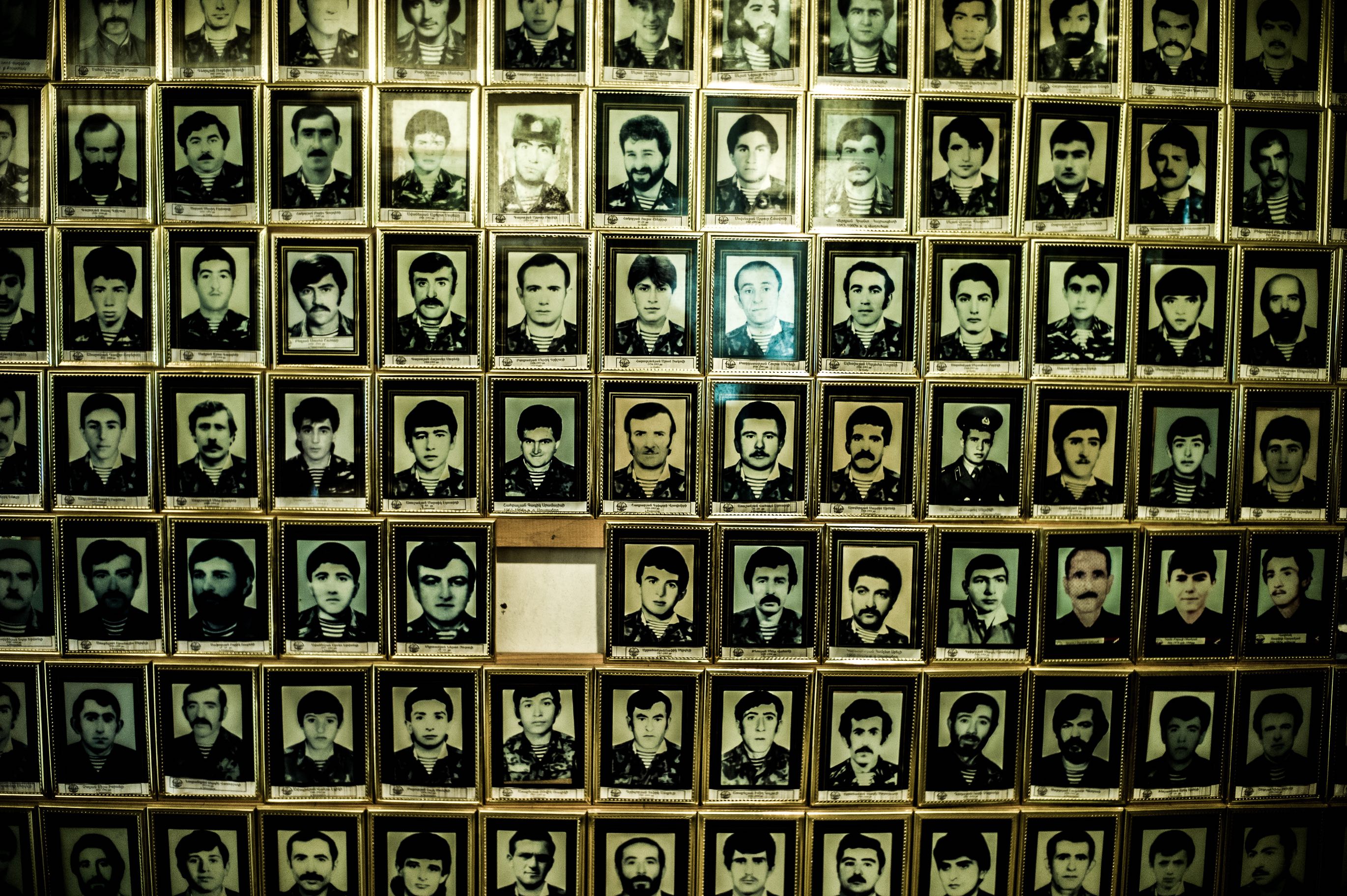 Portraits of the martyrs of the war in the 1990’s line the wall of the town hall in Matakert. 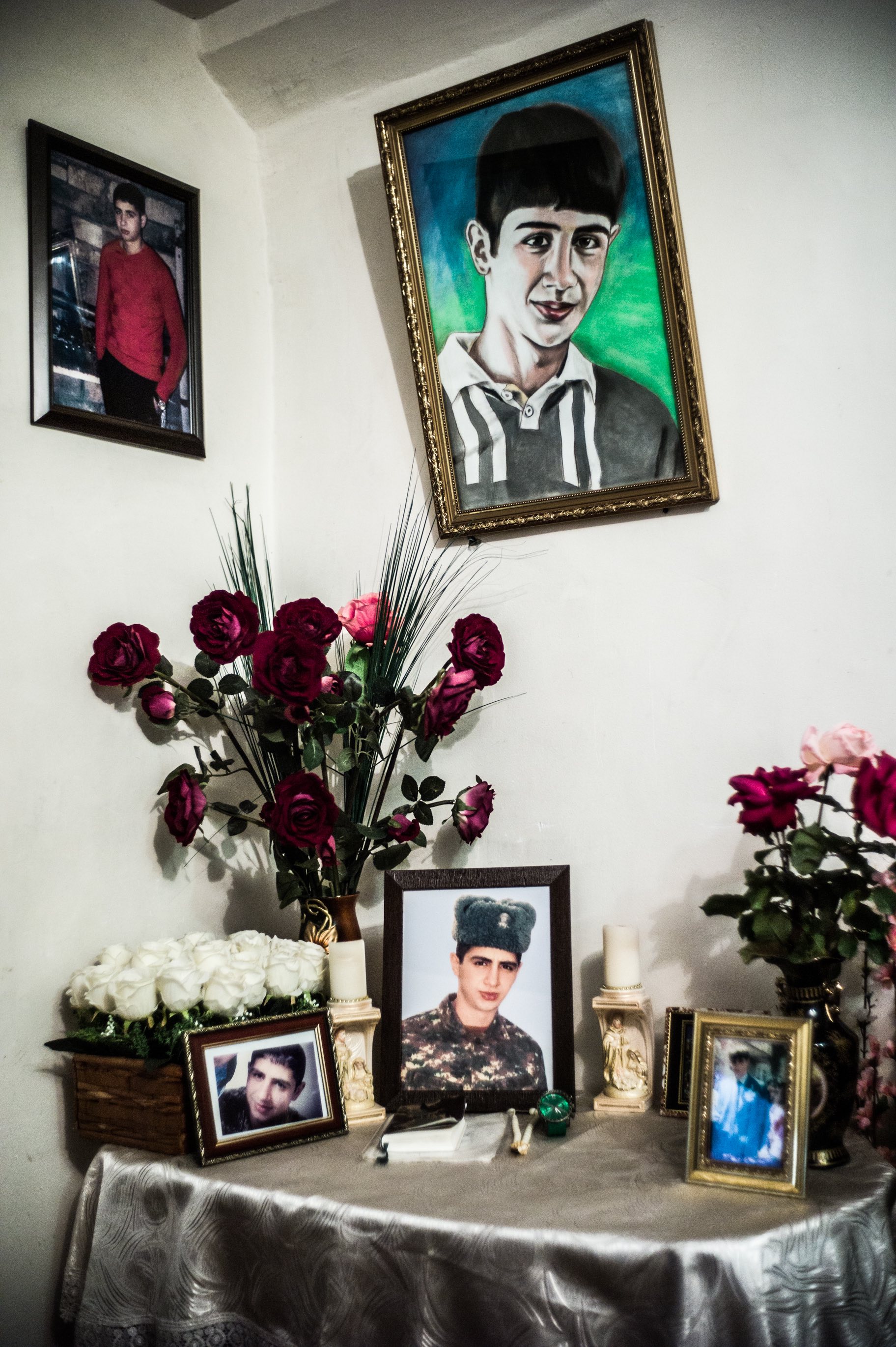 The mural for Levon in the living room of the families house. Levon was 19 years old when he was shot in the head by an Azeri sniper. 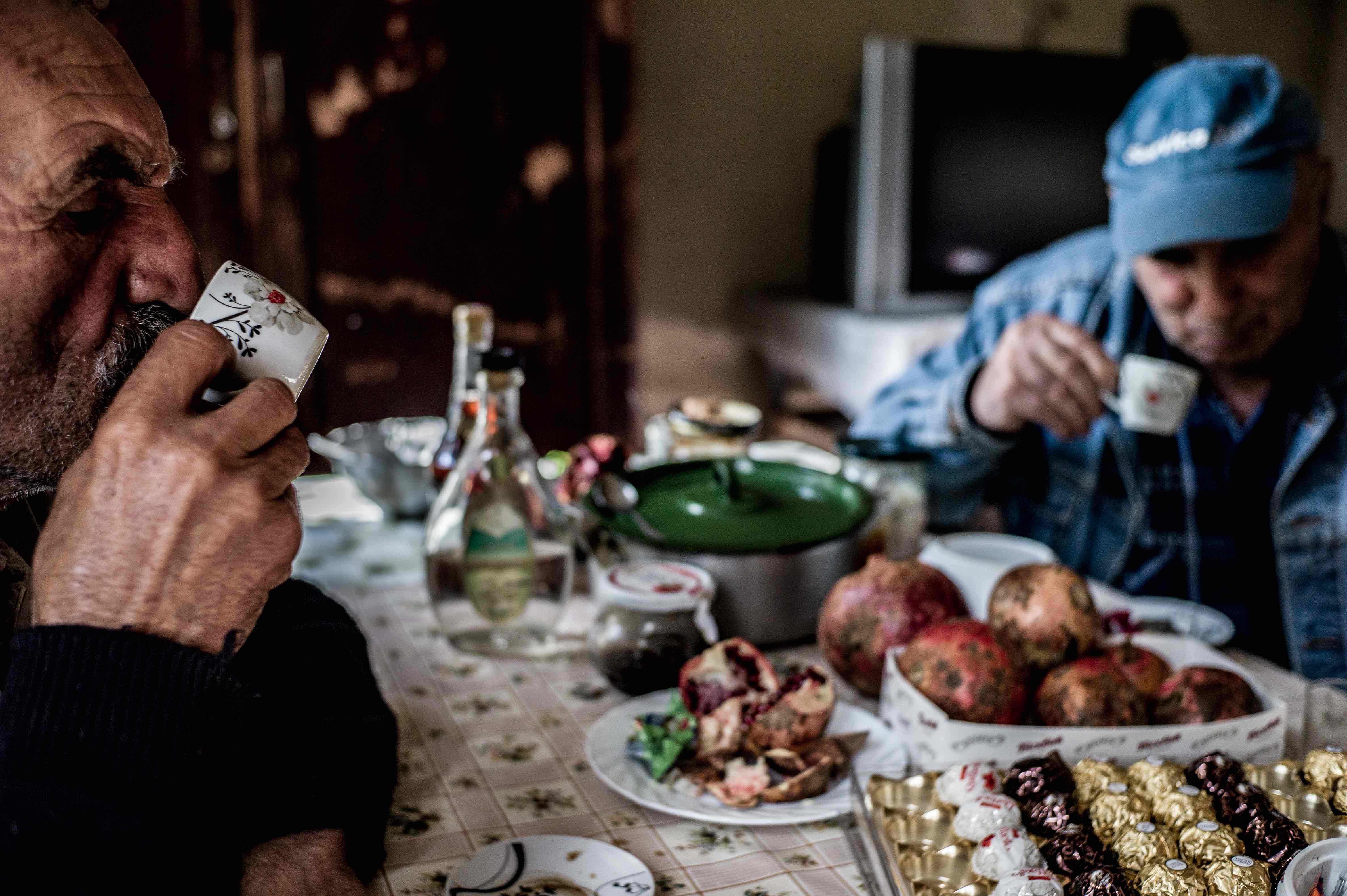 Men drink coffee at the Salyans house in the village of Aygestan. 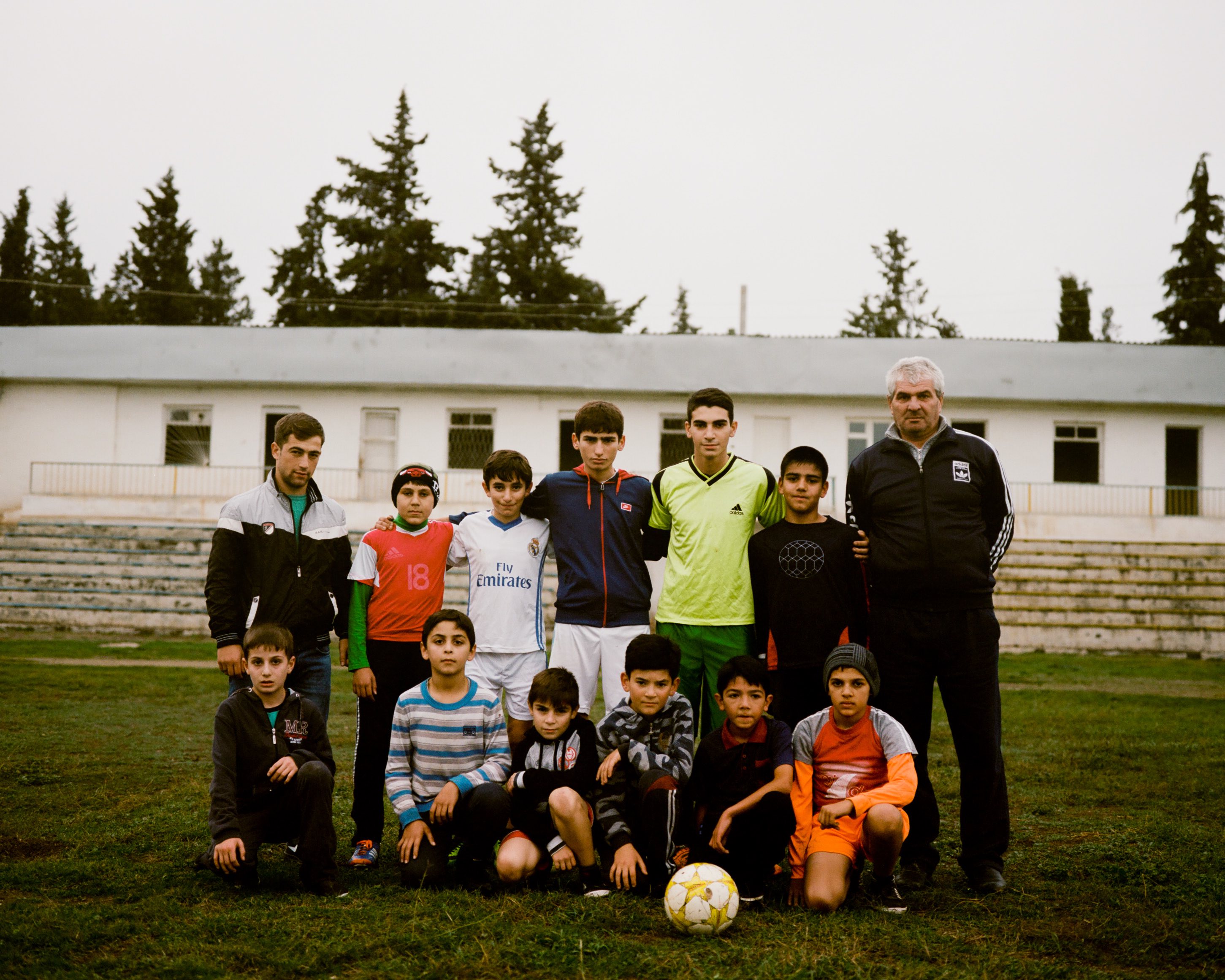 The football team in Matakert, minus a number of conscript soldiers who couldn’t make the training as they were stationed at the frontline nearby. November 2017

Find more of Gus’ work on his official website.

Linkedin
RELATED ARTICLES
OTHER ARTICLES
Financial turmoil is pushing people who work in the sex industry into more dangerous and desperate situations as a means of survival.
By turning a real-life crisis into daytime television fodder, TV bosses have once again shown themselves to be completely out of touch with audiences.
Ahead of the release of their first collaborative album, the producer and rapper talk psychedelics and the state of UK hip hop.
The workforce is now gearing up for industrial action after receiving a measly pay rise, reports Ella Glover.
Rhiannon Adam spent three months capturing an ageing society wracked by division, isolation, and the aftermath of scandal.
Sean Maung’s photos are a love letter to the Black and brown communities that make up New York.