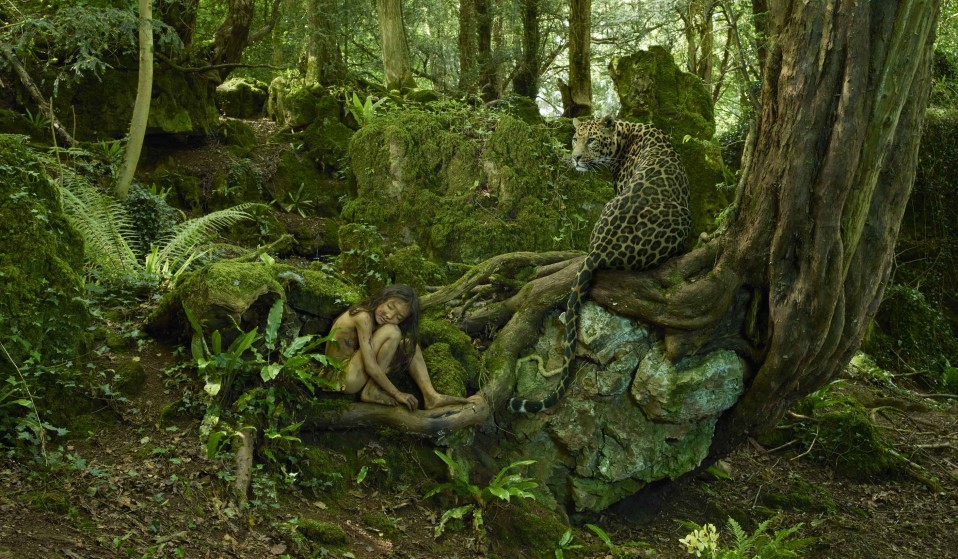 Photographer Julia Fullerton-Batten immersed herself in the dark and distressing world of feral children: kids abandoned by their families to be raised by animals.

Photographer Julia Fullerton-Batten immersed herself in the dark and distressing world of feral children: kids abandoned by their families to be raised by animals, and recreates their experiences in her work.

If you read the Jungle Book, or watched Tarzan on VHS as a child, you’ve come across the stories of ‘feral children’. Granted, these are works of fiction, but children living isolated from human contact from a young age is very much a reality. With little or no experience of human relationships, language or behaviours, the harsh and dark reality of this dangerous and isolated experience is a far cry from singing bears and all that vine-swinging.

When photographer Julia Fullerton-Batten picked up a copy of The Girl With No Name, Marina Chapman’s autobiographical work that tells of a childhood spent being raised by capuchin monkeys deep in the Colombian jungle, Julia was instantly fascinated. 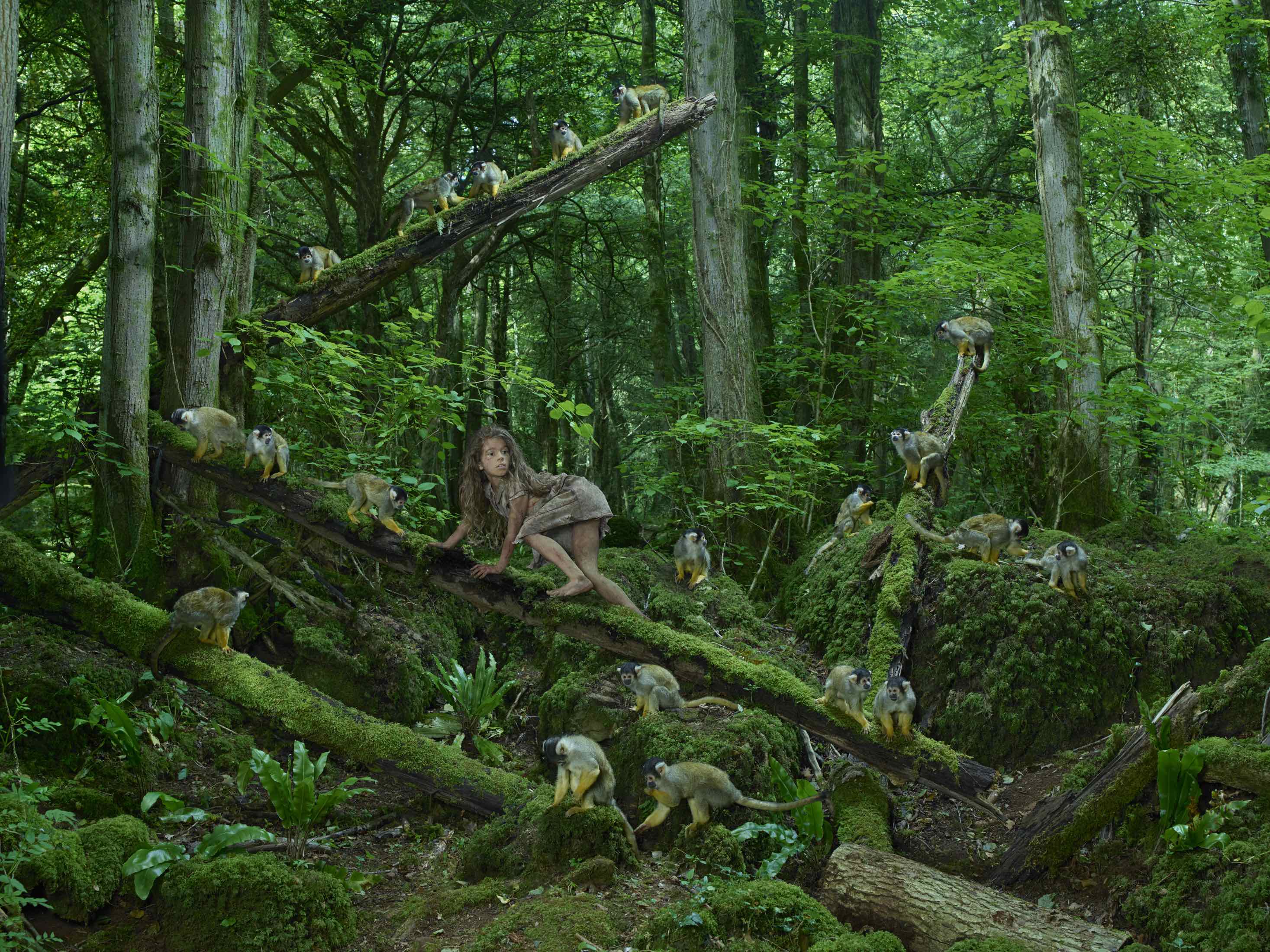 “I was just so intrigued about this woman’s life,” explains Julia, speaking from her London home. “She lived in Colombia, and was kidnapped while playing outside by complete strangers, drugged, and thrown into the forest.” Chapman survived, although some do doubt her story.

This tale got Julia thinking, and soon she was scouring the web for similar stories, both past and present.

It wasn’t long before she’d collected a whole host of examples, spanning from the 1700s to the present day. Stories like that of Sujit Kumar, sometimes knows as the Chicken Boy, discovered in Fiji in 1978. Having had behavioural difficulties as a child, Sujit’s parents confined him to a chicken coop, their disregard for his life distressingly evident. After his mother committed suicide and his father was murdered, Sujit’s grandfather took responsibility for him, but still kept him confined to the coop. 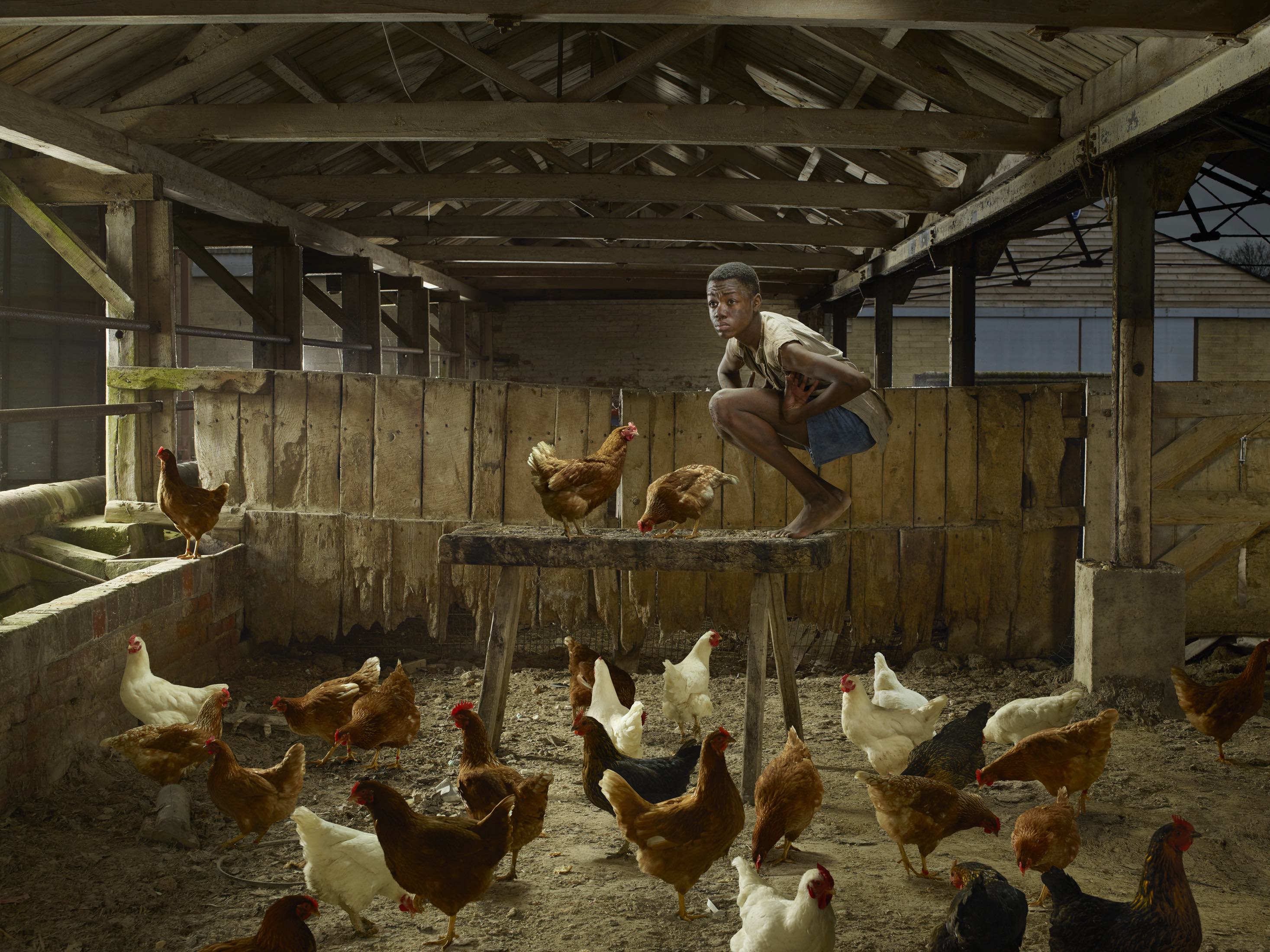 He was just eight-years-old when he was found in the middle of a road, clucking and flapping. He pecked at his food, crouched on a chair as if roosting, and would make rapid clicking noises with his tongue. His fingers were turned inward.

Julia decided to recreate the scenes and situations these children would have lived in. “I wanted to make the scene and the children seem as believable as possible,” she says, “but not so that people would think I was recreating it.”

This was no small task, Julia and her team scoured the United Kingdom for child actors, props and locations, desperate to get the staging just right. “The forest we used is where they film Star Wars: a rainforest-like, mossy looking place unlike anywhere else in the UK, but it’s in Wales.” She visited three or four times before settling.

“The other locations are from location libraries, and I’d always go three or four times beforehand too. My background is in advertising, so I treated each project like an advertising shoot, it was all mapped out in advance.”

The whole process wasn’t easy, Julia is a mother of two-young-boys, and reading about and recreating these harrowing scenarios was tough. “It wasn’t the shooting I struggled with, there I’d focus on the job; your head switches off as you go through the technical details. But before all that when you’re sat alone in your office doing the research… I’d have to leave my office and get some air, try to distract my mind from time to time.”

The result is a series of captivating, otherworldly portraits, recreating a snapshot of these children’s difficult lives. 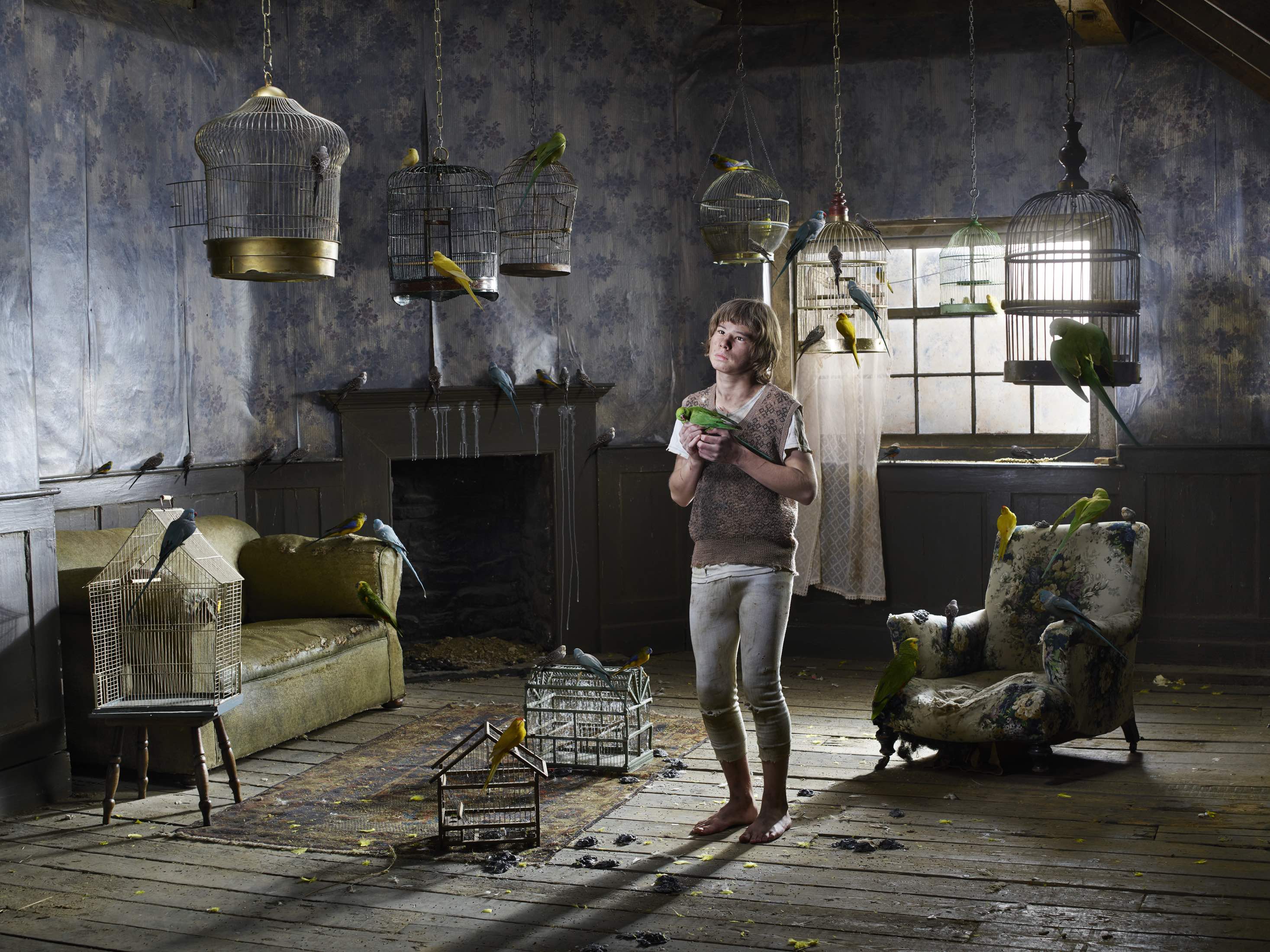 Prava, a seven-year-old boy, was found in a tiny, two-bedroom apartment, living with his 31-year old mother –  but he was confined in a room filled with bird cages, containing dozens of his mother’s pet birds, bird feed and droppings. She treated her son as another pet. He was never physically harmed, she neither beat him nor left him without food, but she never spoke to him. His only communication was with the birds. He could not speak, but chirped. When he wasn’t understood he would wave his arms and hands bird-like. 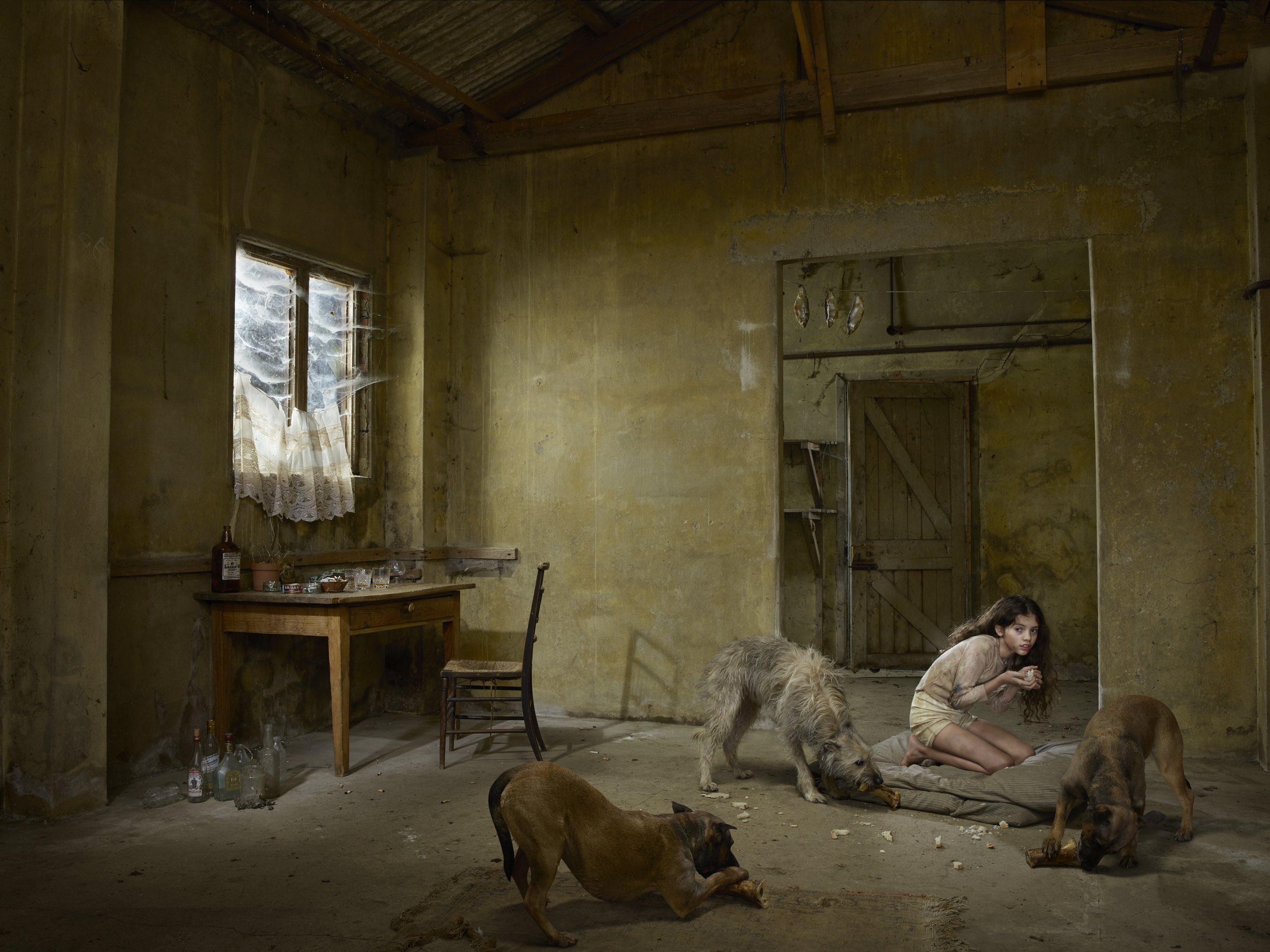 Madina lived with dogs from birth until she was 3-years-old, sharing their food, playing with them, and sleeping with them when it was cold in winter. When social workers found her in 2013, she was naked, walking on all fours and growling like a dog.

Madina’s father had left soon after her birth. Her mother, 23 years old, took to alcohol. She was frequently too drunk to look after for her child and often disappeared. She would frequently invite local alcoholics to visit the house. Her alcoholic mother would sit at the table to eat while her daughter gnawed bones on the floor with the dogs. Madina would run away to a local playground when her mother got angry, but the other children wouldn’t play with her as she could hardly speak and would fight with everyone. So dogs became her best and only friends. 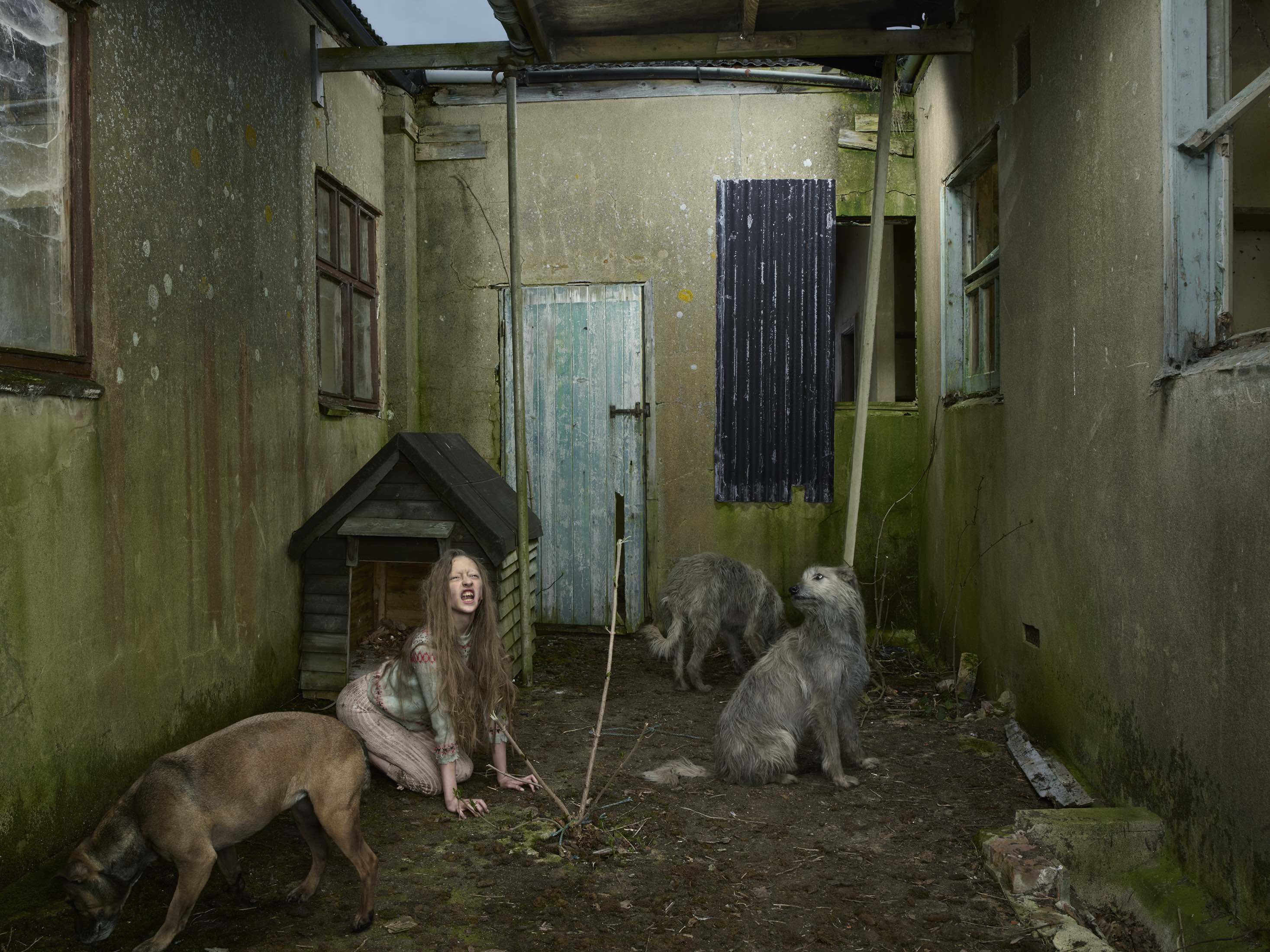 Oxana was found living with dogs in a kennel in 1991. She was eight years old and had lived with the dogs for six years. Her parents were alcoholics and one night, they had left her outside. Looking for warmth, the three year old crawled into the farm kennel and curled up with the mongrel dogs, an act that probably saved her life.

When discovered she behaved more like a dog than a human child. She ran on all fours, panted with her tongue out, bared her teeth and barked. Because of her lack of human interaction, she only knew the words “yes” and “no.” 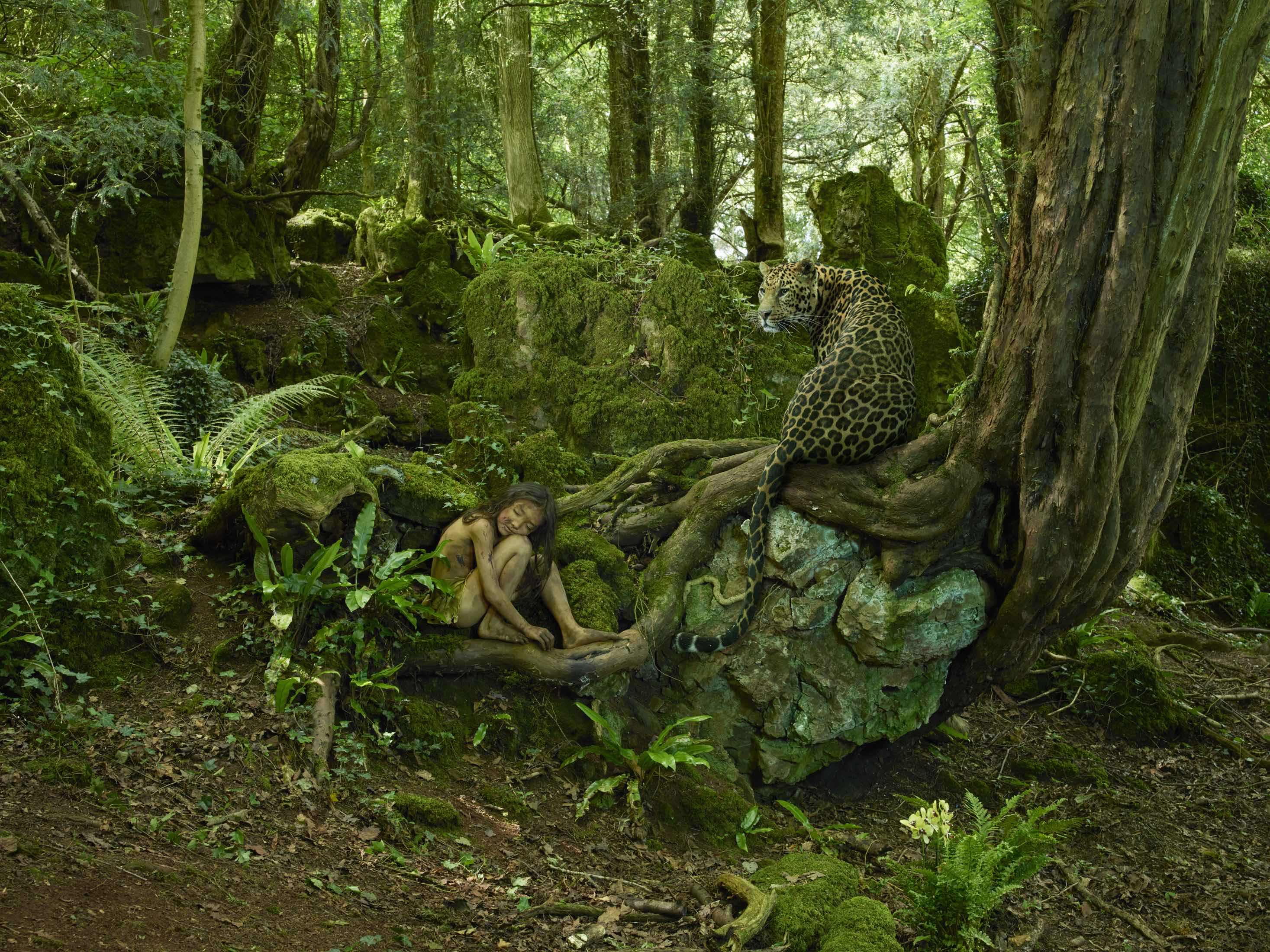 The boy child was two years old when he was taken by a leopardess in 1912. Three years later a hunter killed the leopardess and found three cubs, one of which was the now five year old boy. He was returned to his family in the small village in India. When first caught he would only squat and ran on all fours as fast as an adult man could do upright. 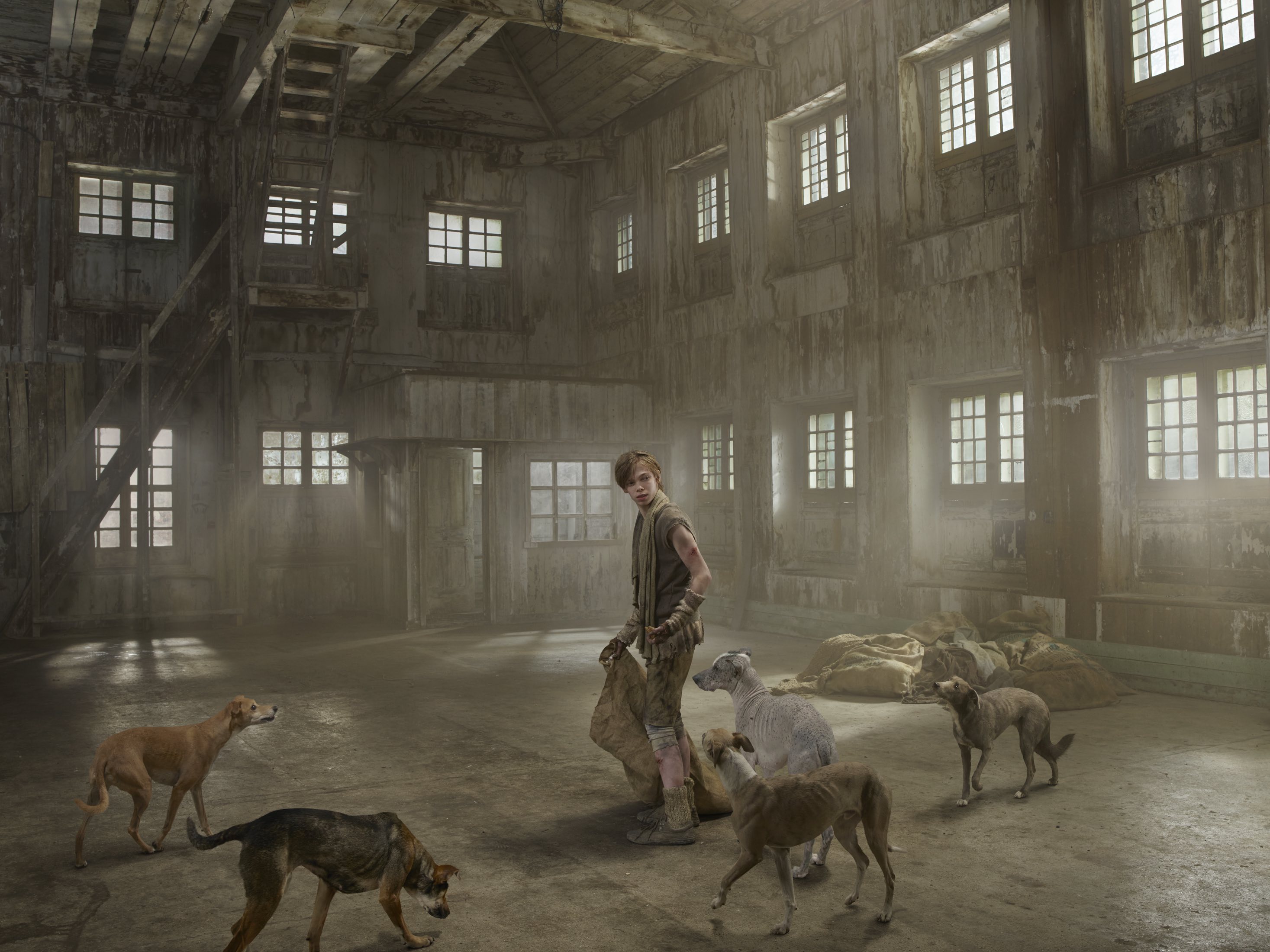 Ivan was abused by his family and ran away when only 4 years old. He lived on the streets begging. He developed a relationship with a pack of wild dogs, and shared the food he begged with the dogs. The dogs grew to trust him and eventually he became something of a pack leader.

He lived for two years in this way, but he was finally caught and placed in a children’s home. Ivan benefited from his existing language skills that he maintained through begging. This and the fact that he was feral for only a reasonably short time aided his recovery. He now lives a normal life.

‘Feral Children’ by Julia Fullerton-Batten is on display at Deda, Derby as part of FORMAT festival. FORMAT runs from 24 March – 23 April 2017 at various venues across Derby.

Linkedin
RELATED ARTICLES
OTHER ARTICLES
Activists and campaigners are fighting back against new laws that would seriously undermine the ability to take industrial action, calling it an attack on fundamental workers' rights.
David 'Dee' Delgado’s photo project is about honouring and uplifting the city of his youth, and a world rapidly disappearing under the relentless onslaught of gentrification.
After fleeing the war in Ukraine, people are finding it impossible to secure affordable and decent housing in the UK.
Photographer Sean Maung reflects on documenting a small town in Pennsylvania afflicted by high levels of unemployment, poverty, violence, crime, and addiction.
The action took place in response to the 200 asylum-seeking children who were placed in hotels run by the Home Office who have gone missing.
At his West Bank restaurant, Fadi Kattan established himself as the voice of modern Palestinian cuisine. Now, he’s bringing his innovative, bold flavours to the UK’s capital.