Art & Culture / Photography / In ‘Swing States,’ this photographer captures the mood on the street after the US election 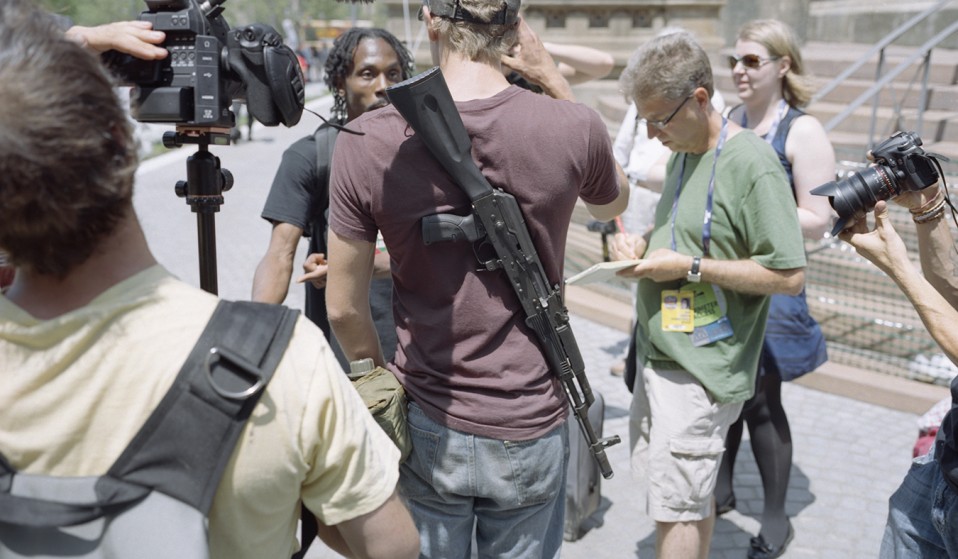 In 'Swing States,' Taylor Dorrell documents the tense calm before the vote and the unrest following it.

In 'Swing States,' Taylor Dorrell uses pictures of the streets of Ohio to document the tense calm before the vote and the unrest that has followed it.

Ohio-based photographer Taylor Dorrell was too young to vote before the 2016 US election. He didn’t care much for politics, either. Somehow, the climate leading up to the vote made him go from political apathy to documentary photography. In an ongoing series entitled Swing States, he documents the tensions before, during and after the election, from clashes at Trump rallies to the Women’s March in Cincinnati.

A resident of one of America’s “swing states,” his photos show a divided nation through snapshots of public spaces and portraits of regular citizens exercising their democratic rights. 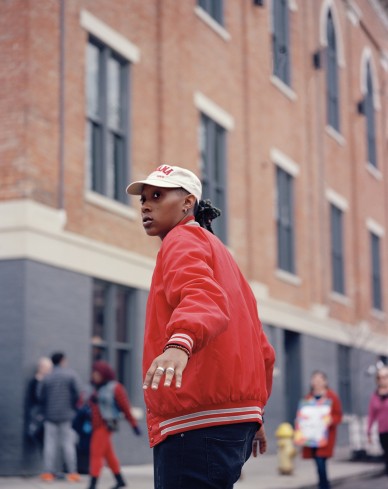 Siri stops traffic at the Women’s March in Cincinnati.

What prompted you to work on Swing States?
I was attending rallies and protests around Ohio and wasn’t initially photographing them as a continued body of work. It wasn’t until November 8 (voting day) that I placed the images together as a project.

You have said that this was the first election you could vote in, and that you were apolitical before 2016.
I was oblivious to politics until I moved to Cincinnati for school when I was 18. I grew up in the rural south and moved to a suburb of Columbus, Ohio in high school. Although politics was present in those places, it wasn’t until I moved to Cincinnati for school that I slowly developed a curiosity in how it affects people’s lives. The neighborhood that I live in is a place where apartments that cost more than $2,000 a month are located next to apartments that cost $250 a month.

This contrast in class being so explicit, due to the proximity in which poverty and wealth are located, I questioned what it really means to “improve” a neighbourhood. It usually implied replacing those who can’t afford to keep up with the increasing rent. This is also the first time that I personally had to worry about finances, being on my own and having to make enough money to afford food. Although my parents and friends’ parents had to worry about finances when I was younger, it was never something I had to be concerned about. In that sense, I had a certain degree of privilege in that I could stay occupied with things I was passionate about without having to be afraid of starving or being homeless. That undoubtedly contributed to my lack of interest in politics. 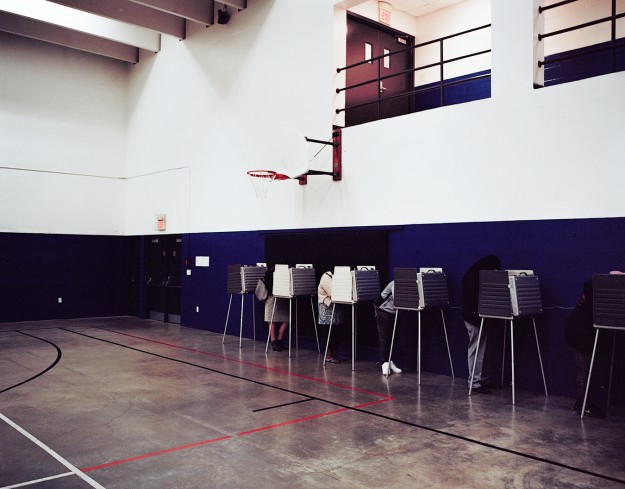 How did Swing States influence you getting more politicised? Are you planning to get more involved politically, after this election result?
The project has helped me understand my place in politics and has led me to experiment in different forms of problem-solving through photography. I’m not going to be the person punching a Nazi in the face, but I will be the one documenting it. I’ll continue to stay conscious of politics in my work. I want to push photojournalism by blurring the politics in my images, as opposed to being blunt in delivering a narrative. My future projects will all be inherently political. 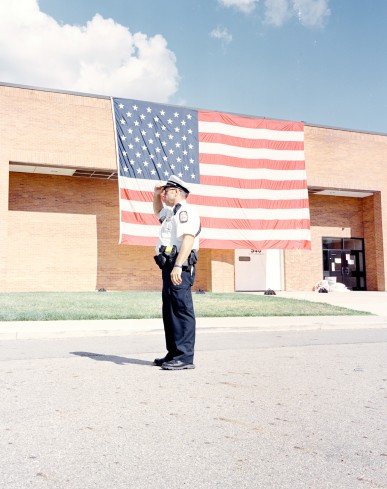 ​A Columbus Police Officer at a rally for Hillary Clinton.

Did you stop to talk to the subjects you photographed?
I always try to ask for permission when I take a portrait of someone. There are some candid shots, but I talked to many of the subjects in the images. The conversation is usually just introductory, but there were a few people I had longer political discussions with.

Was there a character that particularly impacted you?
I had a long conversation with a Trump supporter who didn’t think that the government should help feed families who couldn’t afford to feed their kids. He was specifically referring to people of colour who have more kids than they can afford to support. I asked if he thought that they deserved to starve and he said no, but suggested that there should be a limit on how many kids you can have based on income.

I wanted to know how this was possible without government intervention, seeing as he was generally antigovernment and it seemed to contradict the pro-life stance as well. I pointed out that both sides seemed to use logics that contradict themselves and ended up having an insightful conversation, even if it might’ve been disheartening.

What are you trying to tell the viewer with the images?
I don’t have any personal intentions, but I hope that they communicate a degree of complexity in the democratic process. 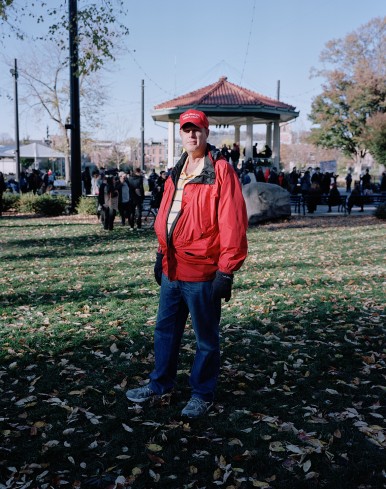 A Trump supporter who was curious about a Not my President protest.

I was really struck by the mood the pictures reflect – to me, they show a very tense “calm before the storm” feel, with the armed subjects, police, fences, threatening stances (reinforced their very bright, somehow disturbing, light). Was this something you set out to do?
With these images and my photography in general, my process is very candid in that I don’t write out a list of images or concepts I need to capture that day. Even though I ask permission to photograph people and occasionally direct them where to look, it’s in the moment and I’m working with whatever’s there. I have a certain style and subjectively choose what to photograph usually based on visual characteristics like light, composition, and content.

I found myself photographing a lot of people with guns, because I’m not used to seeing them in public places, but I’m not setting out to vilify one side or the other. I think the images of guns and militarised police leave a fearful impression on certain viewers like myself, while other viewers might see them as a sign of safety. I hope that the images can be experienced in that way, both sides being able to appreciate them, that giving the images a degree of objectivity where there’s room for the viewer’s interpretation. 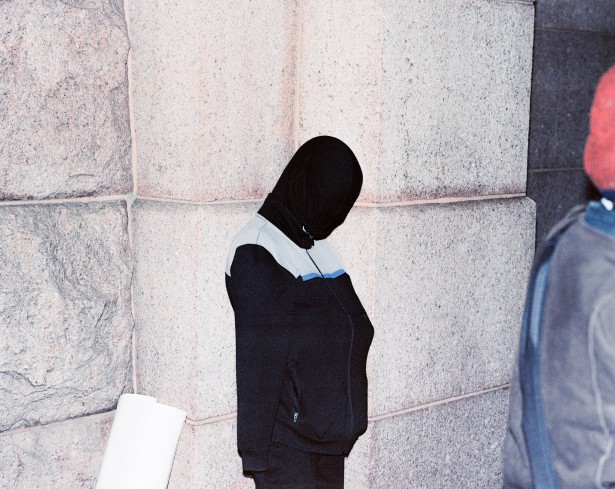 A child tries to stay warm at a protest against Trump’s Muslim ban in Cincinnati.

This project has chronicled the mood of a “swing state” before, through and after the election, from the primaries to the Women’s March. Have you noticed a big shift in mood, post-election, where you live?
I have a diverse group of friends politically, racially, and economically and they all have reacted differently. My friends who were very optimistic about Trump right after the elections, have been very quiet recently. They’re either slowly having a change of heart or feel that now Trump’s president, there’s nothing to worry about. Many of my friends and myself were very disappointed after the election and have opposed his executive orders, most of his cabinet picks, his views, and his “alternative facts.”

Beyond my personal experience, locally there has been an increase in Neo-Nazi, Islamophobic, xenophobic, and racist activity. This is usually done through vandalism, social media, and other mediums that have a degree of personal anonymity. I’ve only seen one Neo-Nazi in person and he’s apparently well known in Cincinnati. The quantity and size of protests have increased, usually to protest Trump specifically, which overall feels more unifying and peaceful as opposed to divisive. 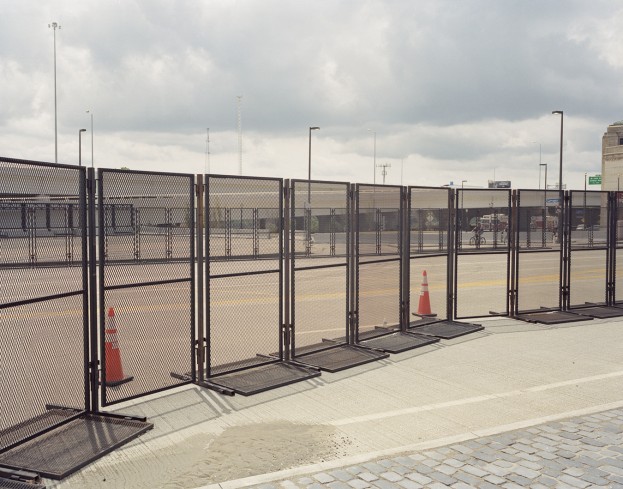 Tell me more about your work. What other topics have you focused on?
I’ve been shooting an ongoing series in and around my neighbourhood, Over the Rhine, exploring the gentrification and police brutality that takes place here. I shot two photo essays where I visited the Creation Museum and Ark Encounter in Kentucky, both of which try to justify believing in young earth creationism. I put the two together and might continue to explore the concept of attempting to use science as a means of justifying religious beliefs. There’s a project I did called Brothers, where I documented my brother and our friends who were, at the time, approaching graduation. As of now, I don’t have a topic that I want to focus on permanently. 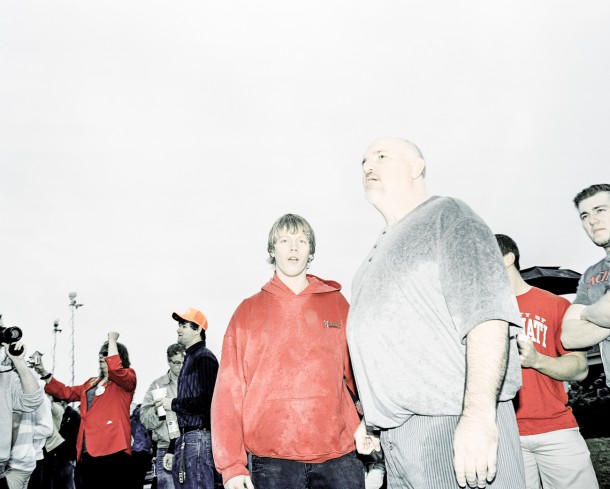 ​Trump supporters yell at protestors outside of a Trump rally in West Chester.

Linkedin
RELATED ARTICLES
OTHER ARTICLES
To mark the anniversary of the mass trespass of Kinder Scout, a group of hikers came together with the intent of creating a new, fully inclusive culture for rural spaces.
Following the release of his latest album God Don’t Make Mistakes, the rapper talks horror villains, police brutality and being unafraid to show his vulnerable side.
New legislation is set to make it more difficult to hold Israel accountable for its human rights abuses.
A group of Ukrainians living in Poland are helping Ukraine withstand Russia’s brutal invasion by buying supplies and shipping them directly to the war’s frontlines.
Photographer Phyllis Christopher recalls capturing sex and protest at a time when the city had become a haven for the queer community.
The revered showbiz chronicler recalls his journalistic beginnings, documenting subcultural scraps in the ’80s.