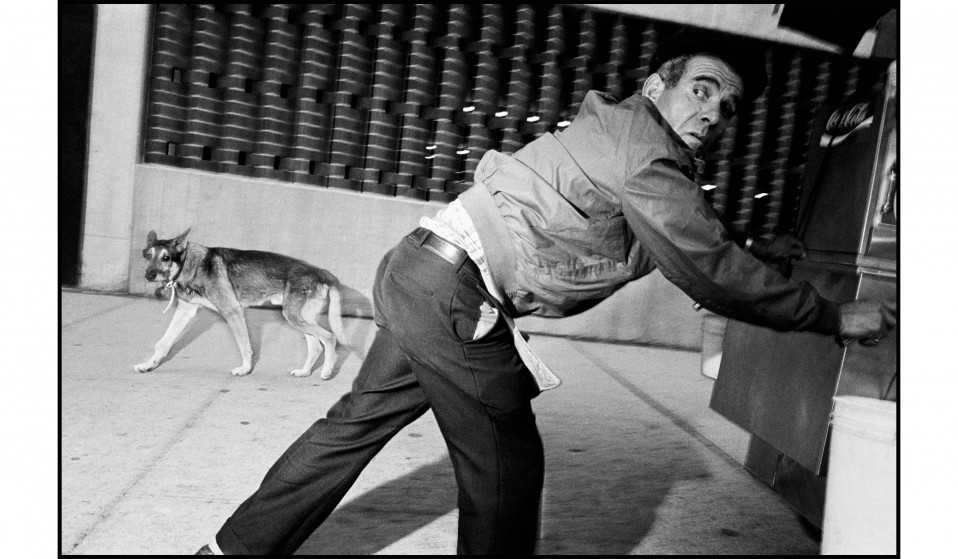 Magnum photographers reveal stories behind their images that respond to Henri Cartier-Bresson’s idea of the decisive moment, including Martin Parr, Tim Hetherington and Newsha Tavakolian.

Magnum photographers reveal stories behind their images that respond to Henri Cartier-Bresson’s idea of the decisive moment, including Martin Parr, Tim Hetherington and Newsha Tavakolian.

A shutter opens and slams shut again in less than a blink of the eye – but the image captured can end up defining an era; or an entire war, social movement or revolution.

The idea of the ‘decisive moment’ was coined by Henri Cartier-Bresson’s English language publisher Simon & Schuster in 1952 and has become a a critical idea in the theory and history of photography.

Now the photography agency Cartier-Bresson co-founded, Magnum Photos, has invited their roster of the world’s most celebrated photographers to pick an image from their archives that represents their take on the decisive moment.

Riffing on an annotation Cartier-Bresson made to Martin Parr’s personal copy of his work, the series is titled The (More Or Less) Decisive Moments. Each photographer presents a personal commentary alongside their image and a reflection on how the concept of the decisive moment influences their wider working process.

We’ve selected ten photographers and their texts, which explore the many ways they’ve interpreted the idea of the decisive moment; what goes through their mind when clicking the shutter; and the philosophical implications of the search for a decisive moment. 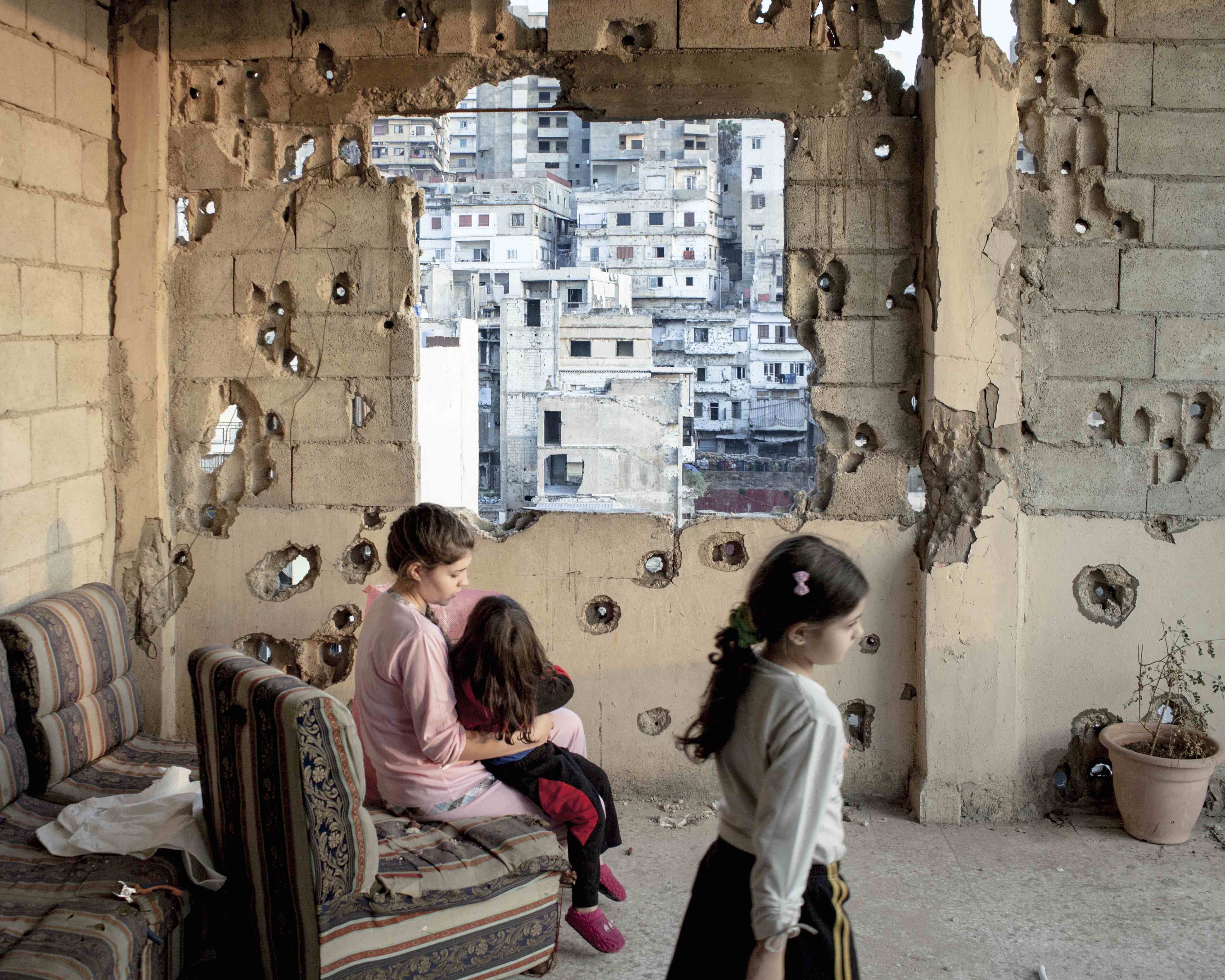 Lebanon. Tripoli. November 2013. Interior of an apartment on Syria Street destroyed by the fights, where the sectarian fights between Sunnis and Shiite are more violent
© Lorenzo Meloni

“I spent more than a year working in Tripoli’s Bab al-Tabbaneh district in Lebanon, documenting a politically fuelled sectarian conflict. I visited many homes on the frontline but people rarely wanted to be photographed because they were afraid, so I often returned home without having even turned my camera on.

“The day I took this photo, I climbed the stairs to the top floor of a building, which was riddled with bullet holes. When I was leaving one apartment, I turned and saw the children there on the chairs in front of the shattered wall; they seemed to perfectly sum up how families were living in the middle of the conflict. With one foot already outside the door, I raised my camera and snapped.”

“I thought I couldn’t be better than Henri Cartier-Bresson so I decided to be the best Bruce Gilden I can be.

“At that time the cops would chase away the people selling Frankfurters with their carts on the street to give them a ticket. This guy was running away from them with his cart so as not to get a summons. The dog in the background completed the dance.” 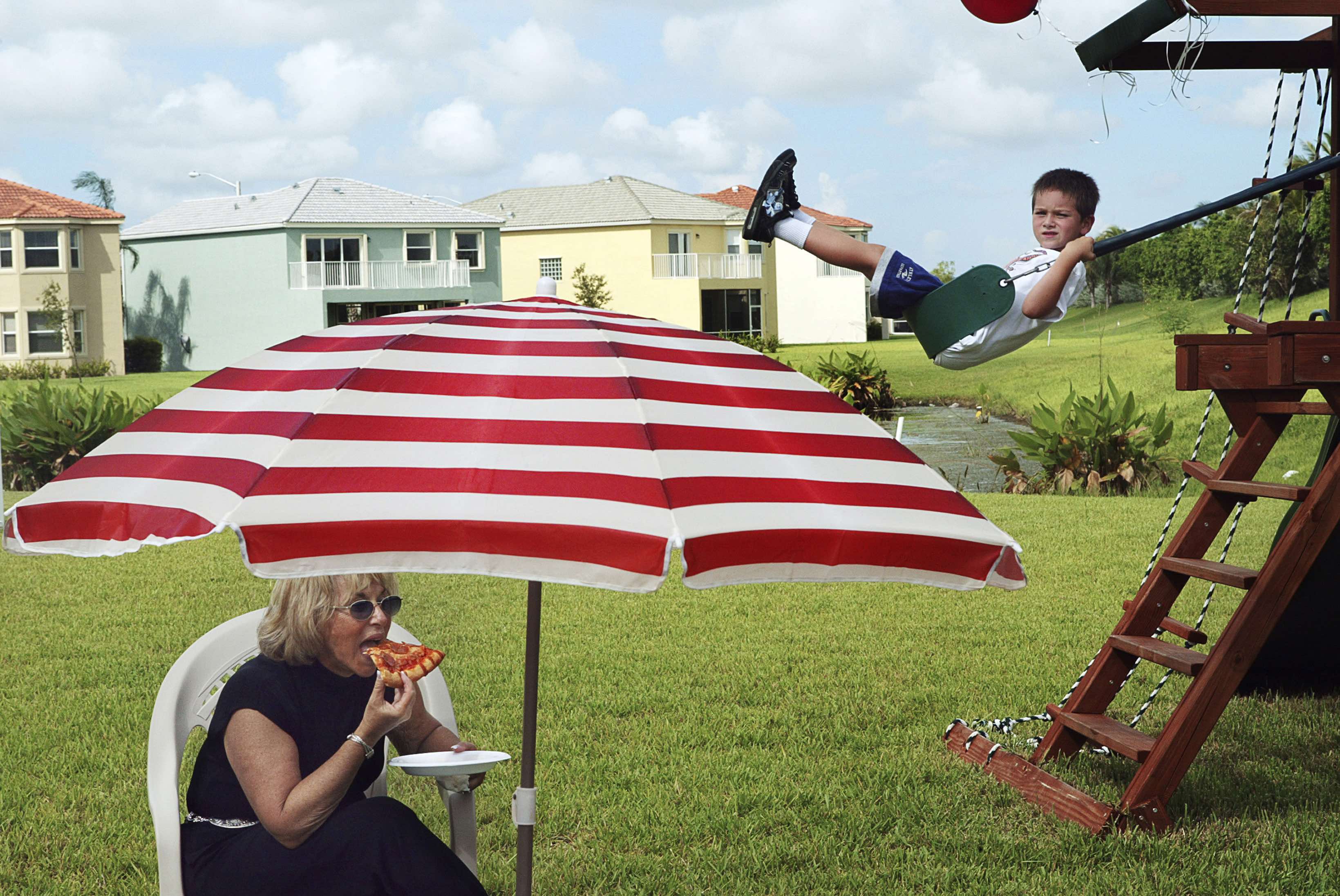 “This image recalls a moment in my own life; it puts me in the shoes of myself before I moved abroad in my thirties, just starting my career as a photographer, so is this how I saw the US back then? Having returned to make new images after almost a decade away, it begs me to consider how I’ve changed, how my perceptions of this country have changed, and how image-making has changed. This is one of the few early images of mine that have stayed with me over time.” 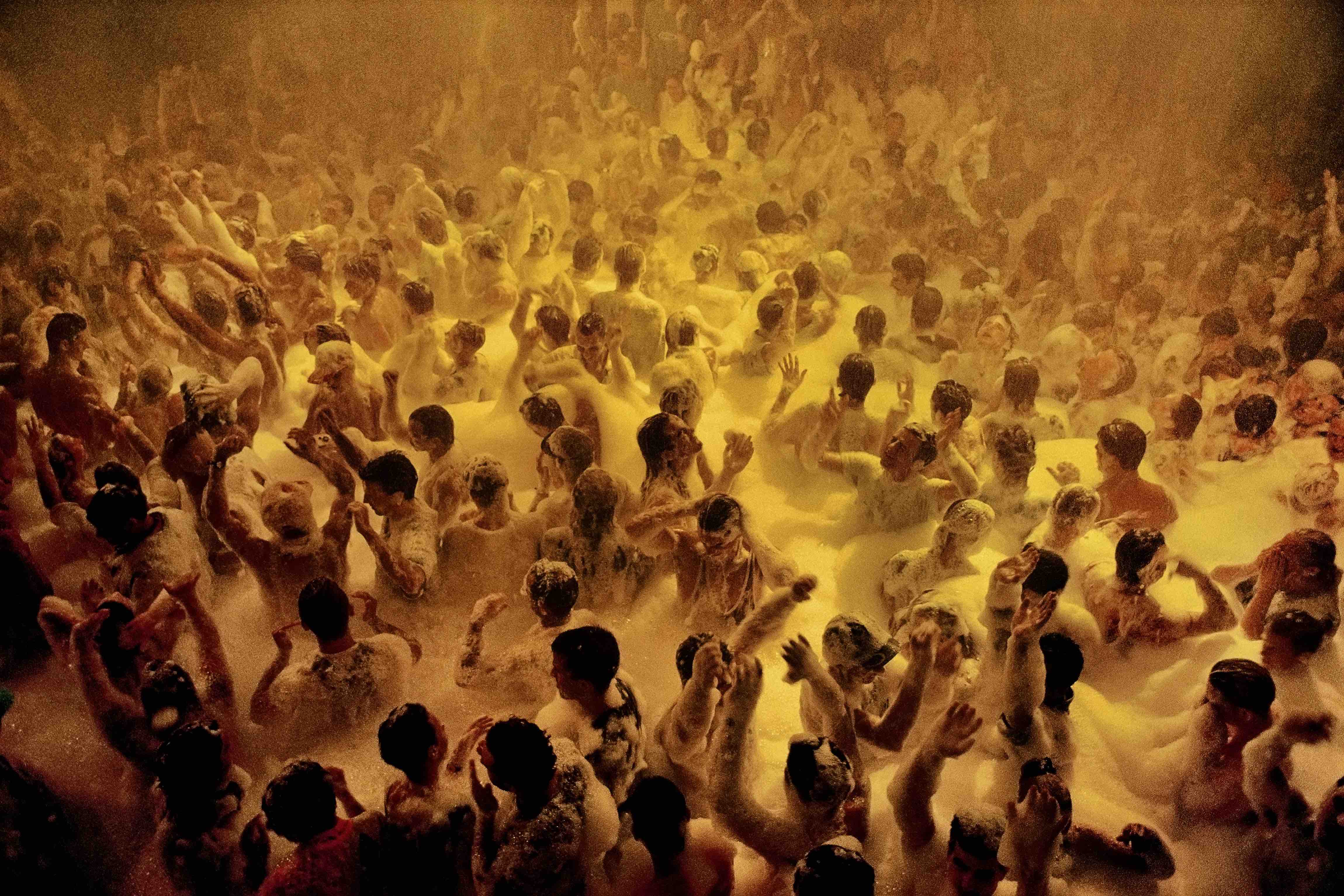 “The decisive moment can take a lot of clock time. This particular decisive moment took two weeks of my time. The summer foam party at the club Amnesia in Ibiza, Spain only happens once per week. It took me seeing it once to know what I should do. At first I thought I should get in the mess, which I did. I got some nice pictures there but I thought getting above it would be better to get the feeling of mass hedonism or like Dante’s Inferno. It took some permission getting to get up into the lighting rig in the ceiling of the club. In the end I shot literally one Kodachrome film frame that looks like this. The club lights flashed multiple colors at random and only this one had the feel and tone I wanted. Two weeks of time literally down to two seconds of opportunity. Worth it all, of course.” 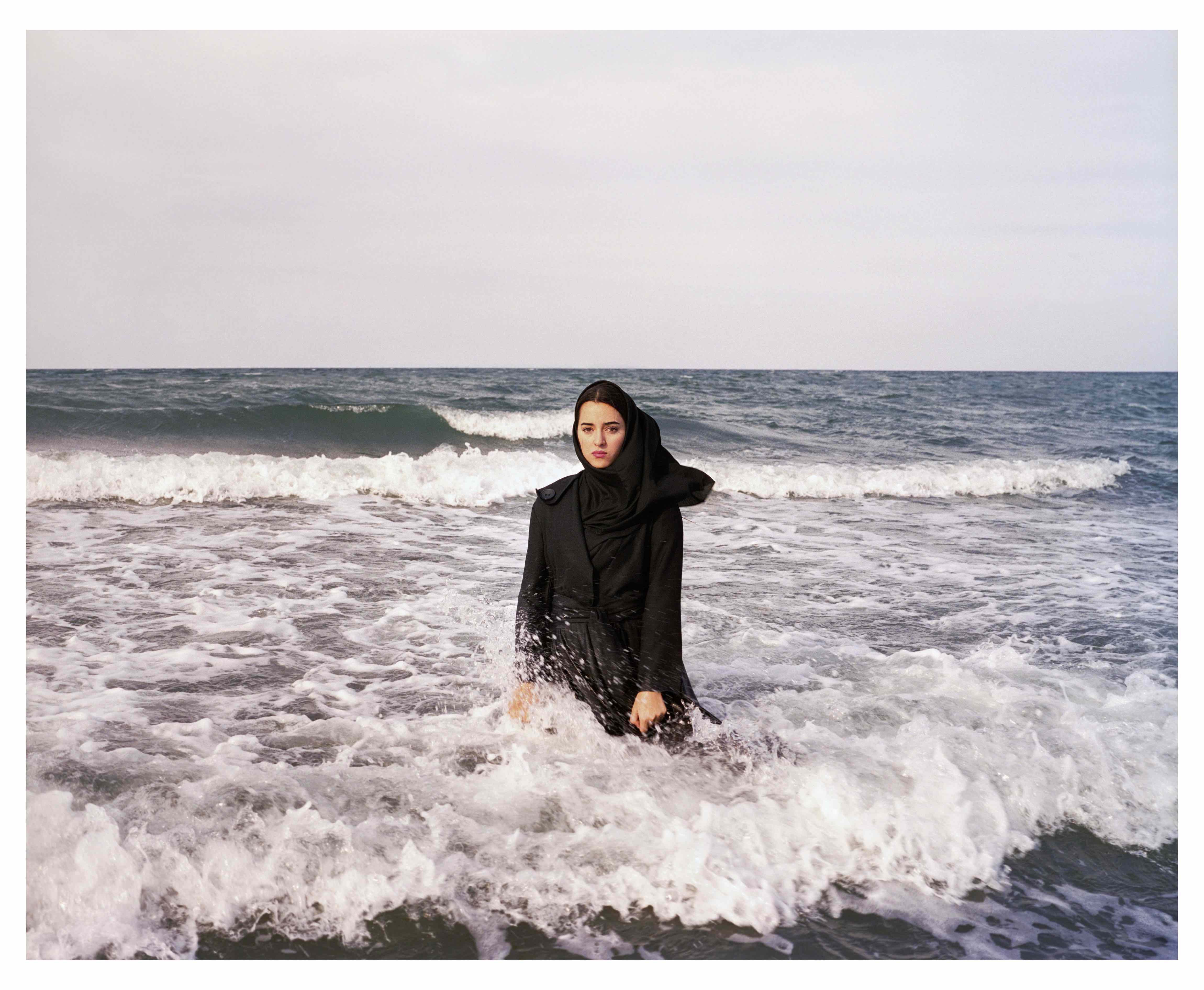 “For my project Listen I made a series of imaginary CD covers for six women singers. I shot several situations, but this one, taken on the shores of the Caspian Sea, came about by a stroke of luck. My sister (the model) was waiting in the freezing water, waves were breaking all around her, there was wind and there were onlookers. I hurriedly made a series of shots, focusing on her while she was withstanding the elements. I remember driving home wondering if I had gotten the picture I wanted. I shot analogue so had no way of knowing. When I got the contact sheets it became clear that for one image everything that I was looking for had fallen into place: two waves are breaking at exactly the right moment, her position is just as I hoped it to be. Most importantly, her gaze, straight into the lens, for me at least, completes the picture.” 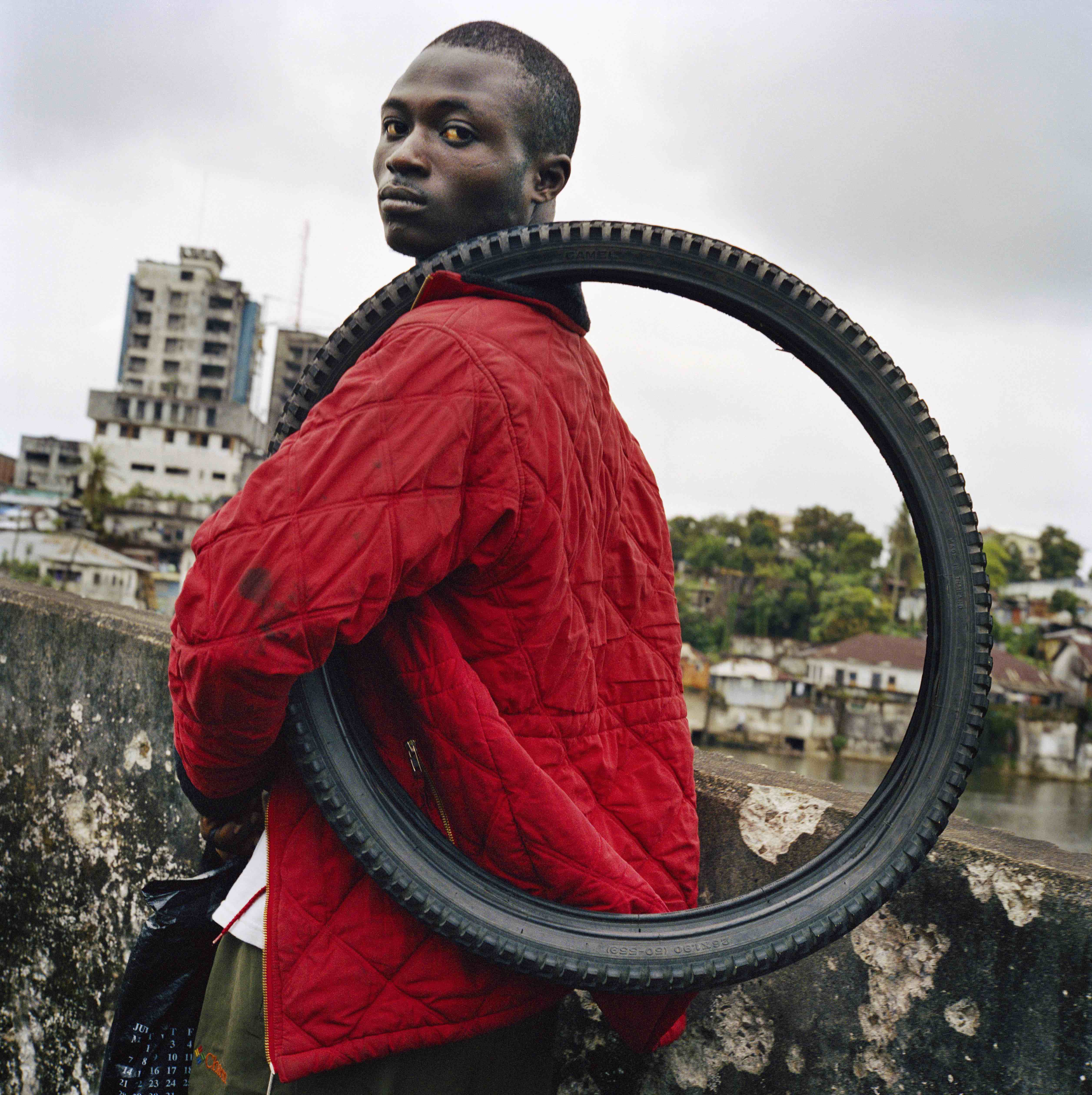 Liberia. 2003. Young man on the Gabriel Tucker bridge in central Monrovia carries a tyre which he is trying to sell. Liberia is one of the world’s largest rubber producers and home to the Firestone Rubber Plantation. © Tim Hetherington / Magnum Photos

“How spontaneous is that glance? It’s hard to know if Tim made this portrait as a caught moment or as a process, but we do know that it was purposeful. Having deliberately identified it as a rubber tire, Tim further annotated the image with historical data: in 1926 the Firestone Rubber Tire Company signed a 99-year lease with the Liberian Government and rubber manufacture became the backbone of the economy. He later returned to the picture to note that in 2005 Firestone was sued in the US for slavery and use of child labor. Tim stored his photographic moments like bottles of wine, maybe inactive for years but never forgotten, and he would dip into the cellar to turn them occasionally until the moment matured.” — Stephen Mayes, Tim Hetherington Trust 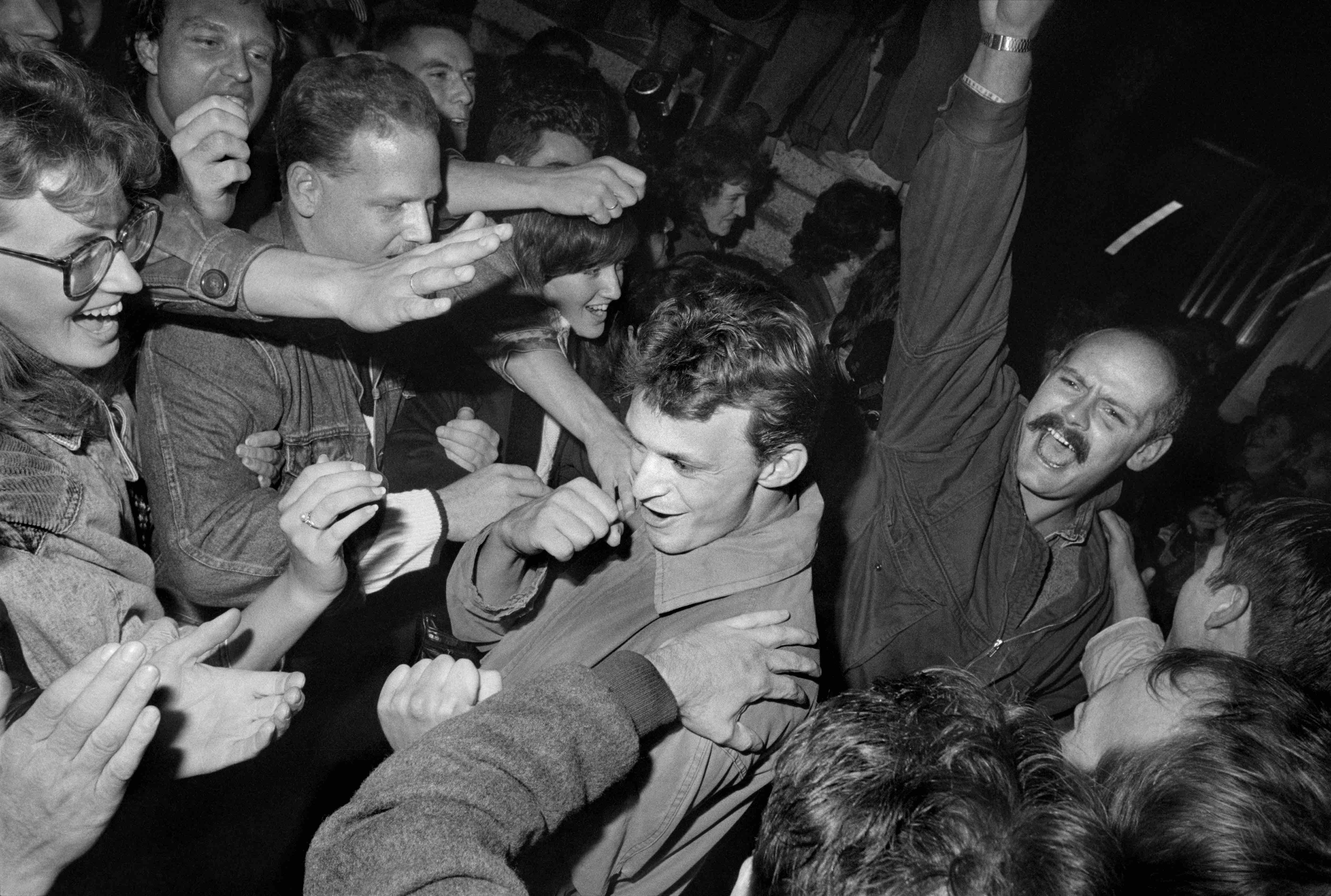 Germany. West Berlin. The Fall of the Berlin Wall. East Berliner’s crossing into the West, in the immediate aftermath of the opening of the Berlin Wall at Checkpoint Charlie at midnight on November 9th 1989. © Mark Power / Magnum Photos

“By a series of fortunate events I found myself in Berlin on the night the Wall (unexpectedly) opened. The story of how I came to be there at all is a long one, but fate dealt her cards and I was lucky. The moment was decisive historically, of course, and one of those all-too- rare occasions when a momentous event is joyful rather than tragic. But it was decisive on a personal level too: my derailed photographic career was put firmly back on track, and most success I’ve had since can be traced back to that one chilly night.

“I witnessed thousands crossing joyfully from East to West, but a few weeks later I was to learn that not everyone shared the elation. At a family reunion in London I met (for the first time) several relatives on my partner’s side, mostly Berliners, mourning the collapse of a political doctrine they’d dedicated much of their lives to, and reiterat- ing the truism that there are two sides to every story.” 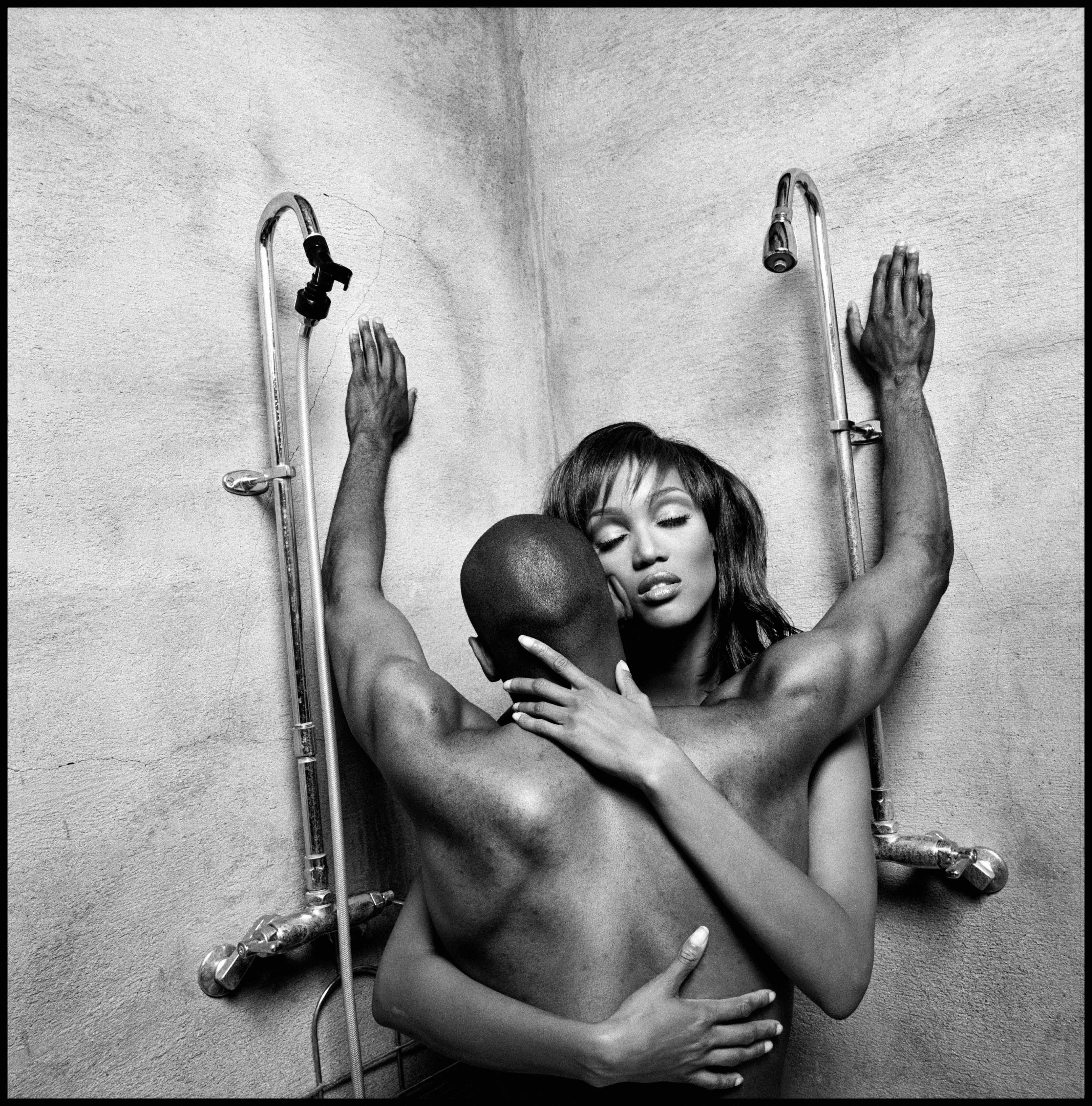 “Tyra had asked me to do a shoot with her after seeing a contact sheet of photos of another actor during downtime on a set. We were both fatigued during the shoot because we had worked on a night-shoot production the night before. When John showed up to hang out and watch during my private shoot with Tyra, I had the idea to shoot some images of them together but I also did not want to infringe on their privacy. John suggested I do some photos of them together. Tyra is what I think of as a generous, intelligent, and sensitive human being, as well as being a beautiful woman, and John is an impassioned artist filmmaker, who is a brilliant writer, connected with the world he lives in. I wanted to capture an image of the two’s feelings for each other at that particular point. Tyra briefly closed her eyes and the moment was there.” 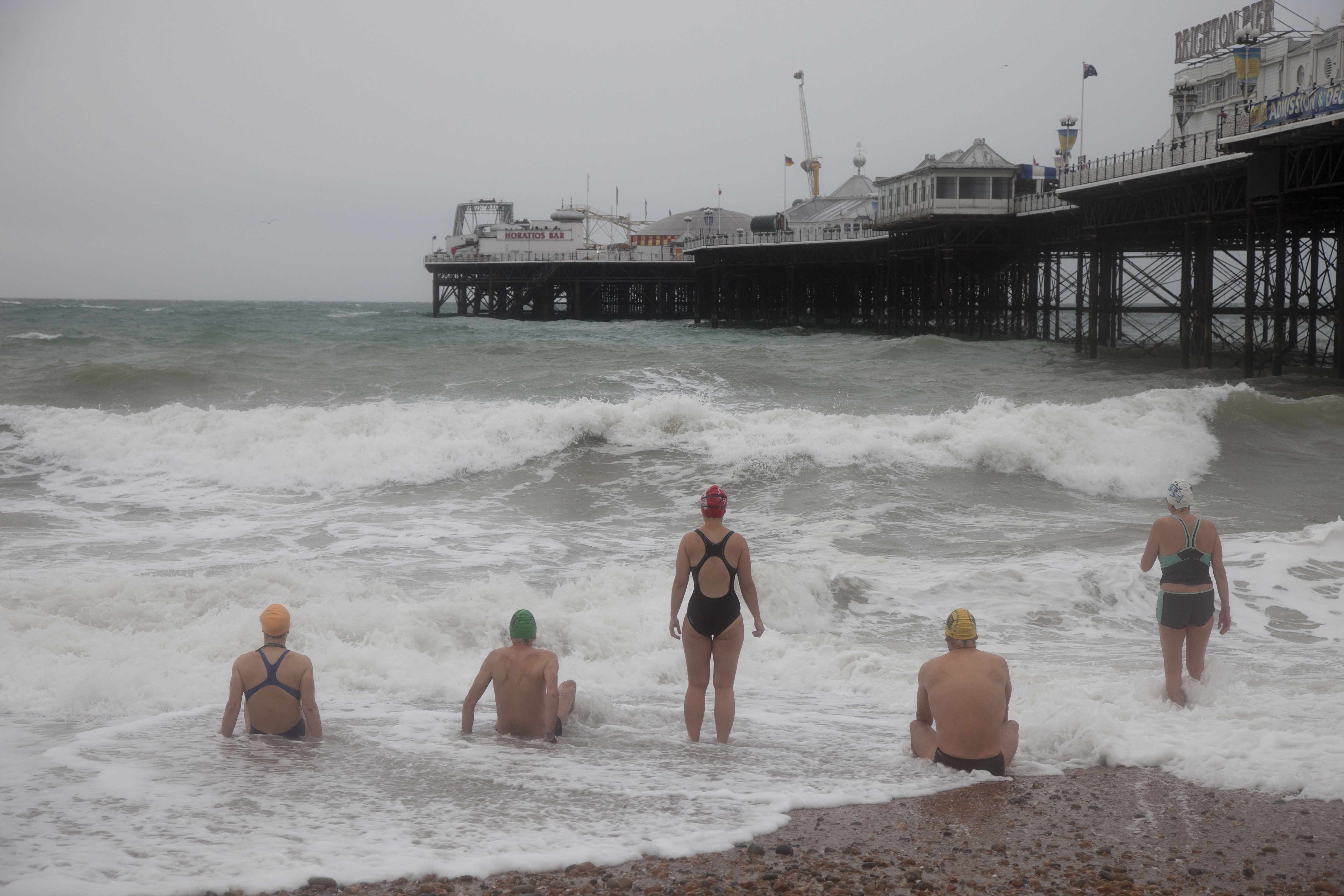 “This is the swimming club in Brighton, who go and swim in the sea, every day of the year, regardless of the weather (wet suits are discouraged). You can see, here, the waves were so fierce, they were experiencing their own ‘Decisive Moment’ as they pondered if they dare go into the sea or not. They did eventually sneak in, but a long leisurely dip was not on the cards that particular day.” 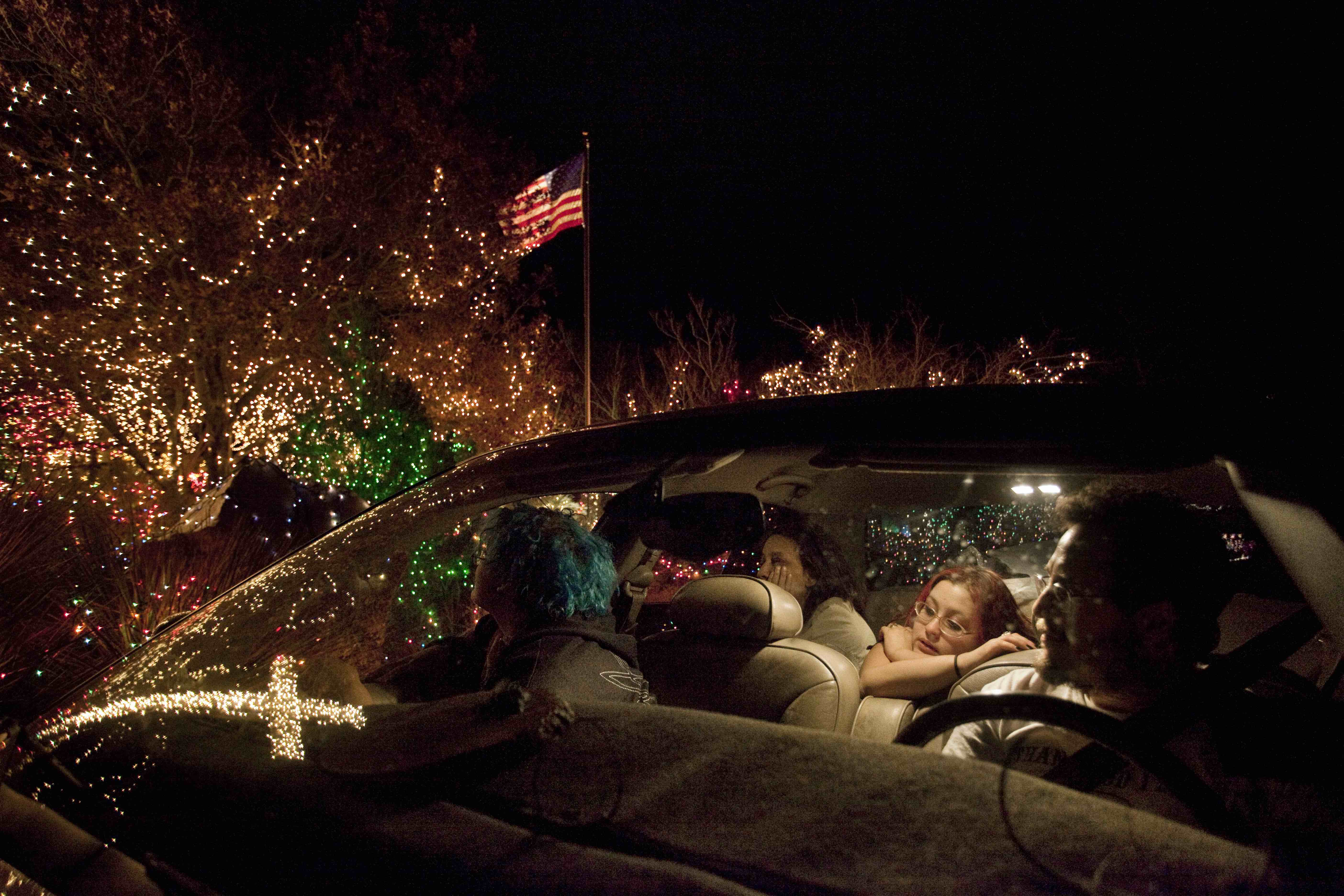 I am about to call it a day. © Bieke Depoorter / Magnum Photos

“Sometimes, you realise that you’re part of a moment that has all the visual elements that are necessary to create a good photo, and therefore communicates the atmosphere you were a part of. For me, that is the decisive moment. I had such a moment with this family in Amarillo, Texas. They had every reason to be unhappy and give up: three of the four family members were sick, they were poor and lived in a very dirty small trailer full of pests. Instead of going home, the parents often picked their children up after school and drove around town. That particular day in the cold winter they went to buy sodas and chips and decided, instead of going to the movies, to drive around the rich neighbourhoods to watch the overwhelming Christmas lights covering these big houses.

“They never felt any jealousy towards the rich, they were just enjoying the beautiful lights and their time together. I felt the same and was happy that they shared this moment with me. This kind of moment is very rare and only happens to me about once or twice a year.”

The (More or Less) Decisive Moments explores the meaning of the famous “decisive moment” on contemporary and classic photography and the ways in which the decisive moment is manifest in the work of Magnum photographers today. Signed or estate stamped prints for $100 from over 60 photographers and artists will be available for a limited time, from 9am EST on Monday 6 June until 11pm Friday 10 June 2016, from the Magnum Photos Shop.

Linkedin
RELATED ARTICLES
OTHER ARTICLES
To mark the anniversary of the mass trespass of Kinder Scout, a group of hikers came together with the intent of creating a new, fully inclusive culture for rural spaces.
The failure to hold landlords to account is denying tenants their basic dignity, writes Bella Saltiel.
While protests over abortion rights rage in the US, access to abortion services is still almost nonexistent in parts of the UK.
Following the release of his latest album God Don’t Make Mistakes, the rapper talks horror villains, police brutality and being unafraid to show his vulnerable side.
Members of the collective share some of their reasons to run as part of #UnitedBySummits, a campaign that looks to uncover transformative power of the outdoors.
Photographer Robin Graubard’s debut book offers an unflinching record of turbulence and change across the Balkans.