Issue Archive / Why scooterboys represent the best of British subculture 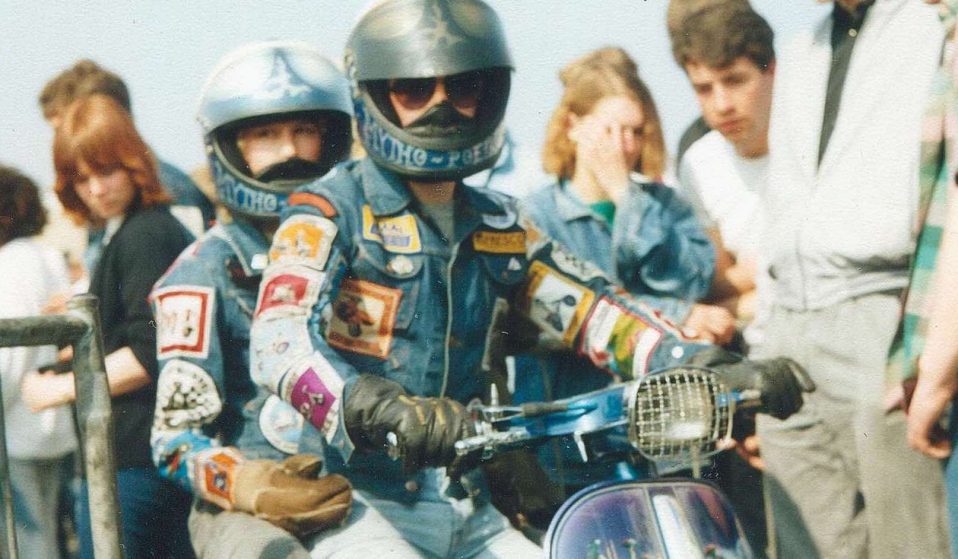 Photography © Courtesy of Martin ‘Sticky’ Round

Not everyone who rides a classic scooter is a Mod. Throughout the ’80s and ’90s, Scooterboys were a new breed of rider with a punk attitude and homegrown style.

My first scooter was an LI150 in 1979. I swapped it for an old gas fire out of my bedroom. At that time, you’d find a scooter in some old gimmer’s garage and give them a tenner for it. That same year I started hanging out with the Chorlton Trojans Scooter Club, which was Ian Brown, Mike Phoenix and all that crew. The first time I met Ian was when mine and Kaiser’s [singer with pre-Stone Roses band The Waterfront] mob had trouble with some ne’er-do-wells in Oldham and we had to recruit the Trojans to come and help kick fuck out of them. We’ve been friends ever since.

Our firm wasn’t so much Mod as a mixture of football fans, skinheads and fucking cranks. We recognised the lineage from Mod but we were more like street casuals. We wore Adidas trainers and straight jeans. Mod was always a bit too much fannying-about and elitism. You can overdo it. Mods are obsessed with image whereas Scooterboys will just get the army fatigues on and go. Their money gets spent on hyping the scooters. That’s what I love: it’s more about the scooters than the fashion. 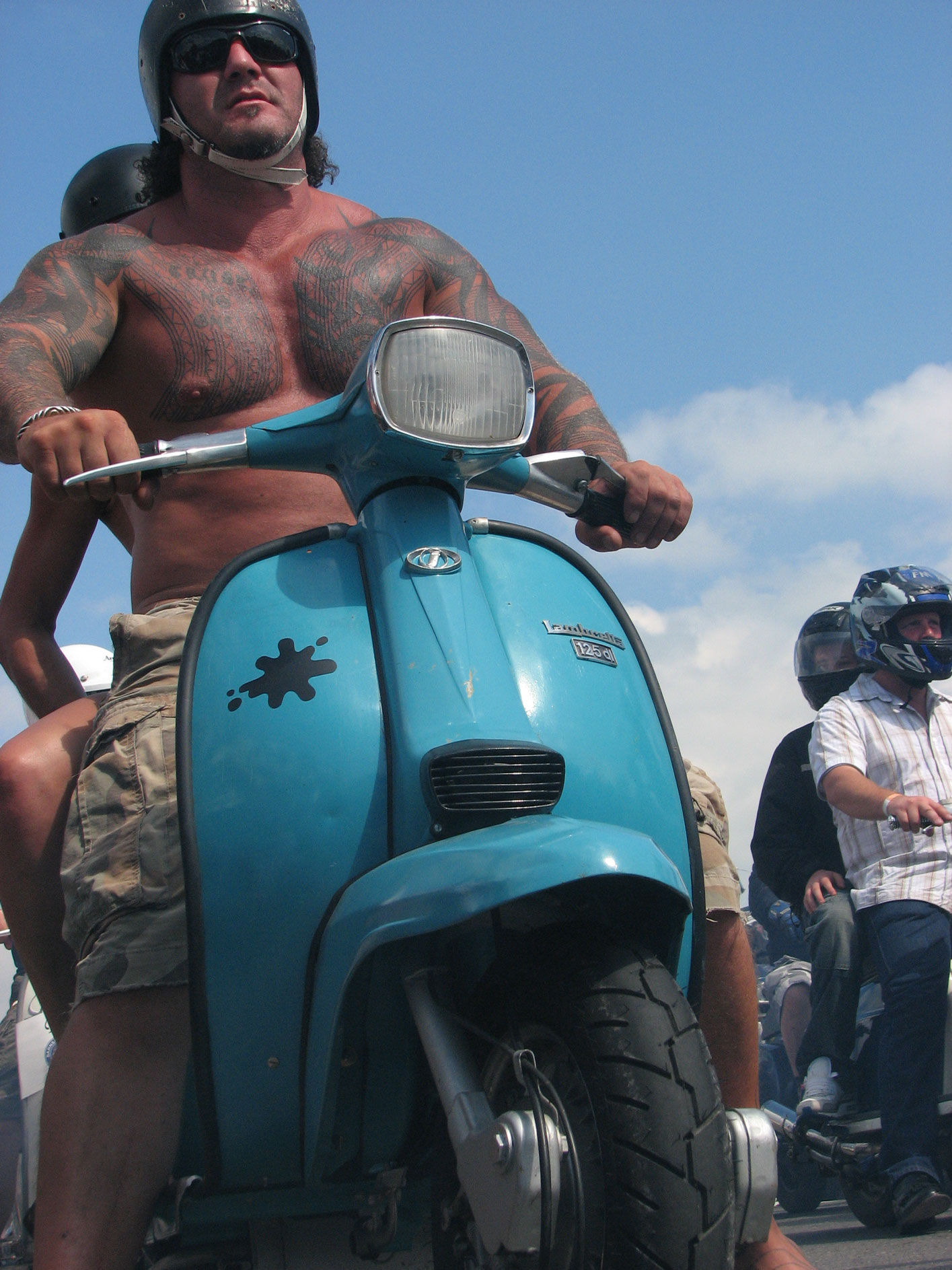 Scarborough Easter ’79 was my first rally and a real eye-opener. My scooter was bust, so I went on the back of a mate’s. It was astounding: 10,000 scooters and the smell of 2-stroke everywhere. Those rallies broadened your horizons and exposed you to new music: Motown, Stax and a bit of Northern Soul, but also the Psychobilly thing. They also introduced me to stay-up-all-night pharmaceuticals.

Nobody had any money. Everyone was in the same boat. This was Thatcher’s Britain, lest we forget. We were always on the dole so we used to rough it; if someone had the money for a room, then about six or seven people bunked in. 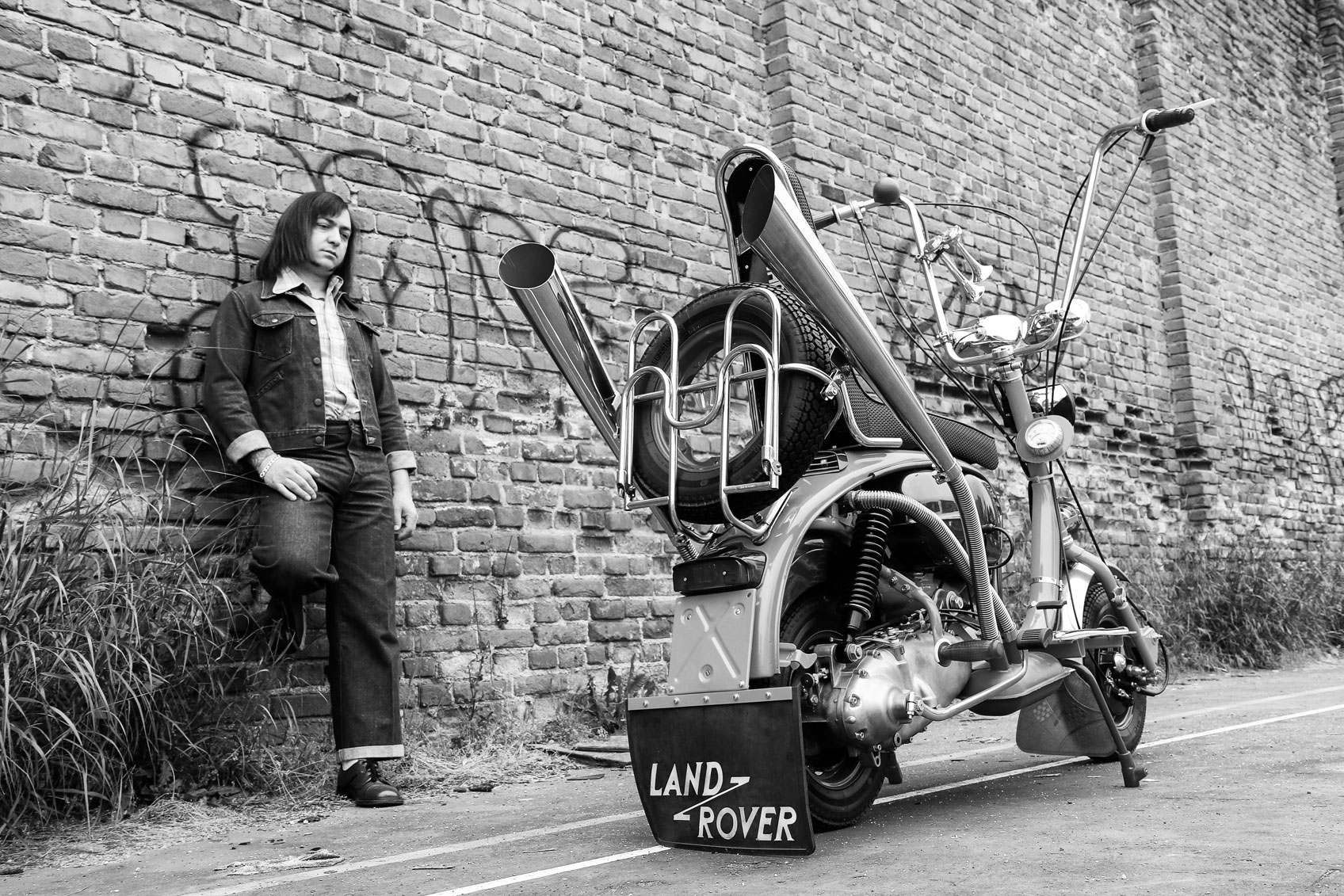 I probably did the rallies until ’84 before I got more involved in bands, but I’ve always kept scooters for buzzing around my local area. I’ve still got a Lambretta GP and I fancy another one with a 275cc Targa Twin engine. (I deserve to treat myself because I’ve been working my nuts off for the past few years.)

To me, Scooterboys have always been forgotten people. Everyone remembers the Mods and Rockers but to be a Scooterboy was not such a defined thing. You weren’t restricted to only liking this because you dressed like that. You could have a flat-top or dreadlocks; it didn’t matter.

We deserve our moment in the sun for taking scooters to a different level in terms of tuning and customising, keeping the scene vibrant and alive. Without Scooterboys, it could have gone the way of the Teddy Boys: constantly regurgitating itself and going nowhere. Scooters are always in your blood. Once you get that 2-stroke in there, it’s hard to shift it… 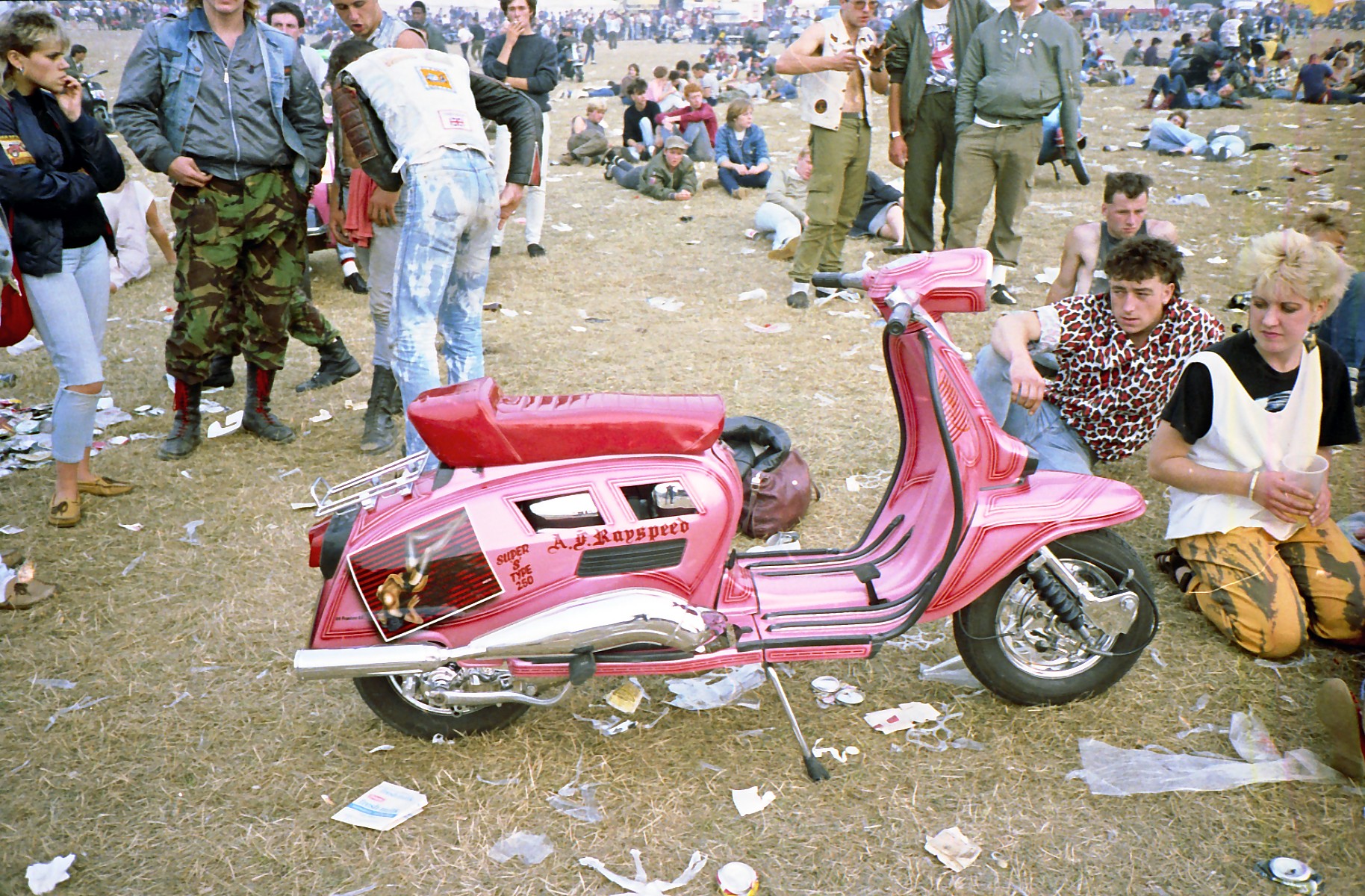 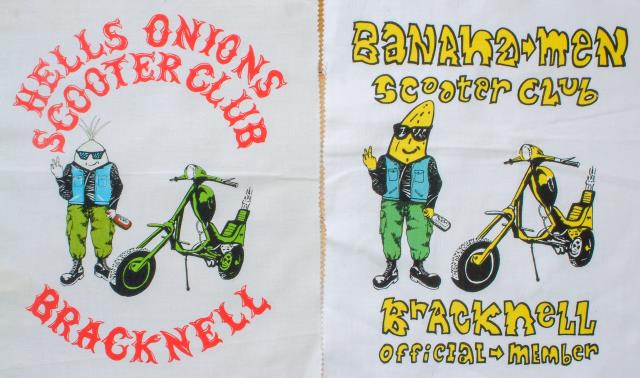 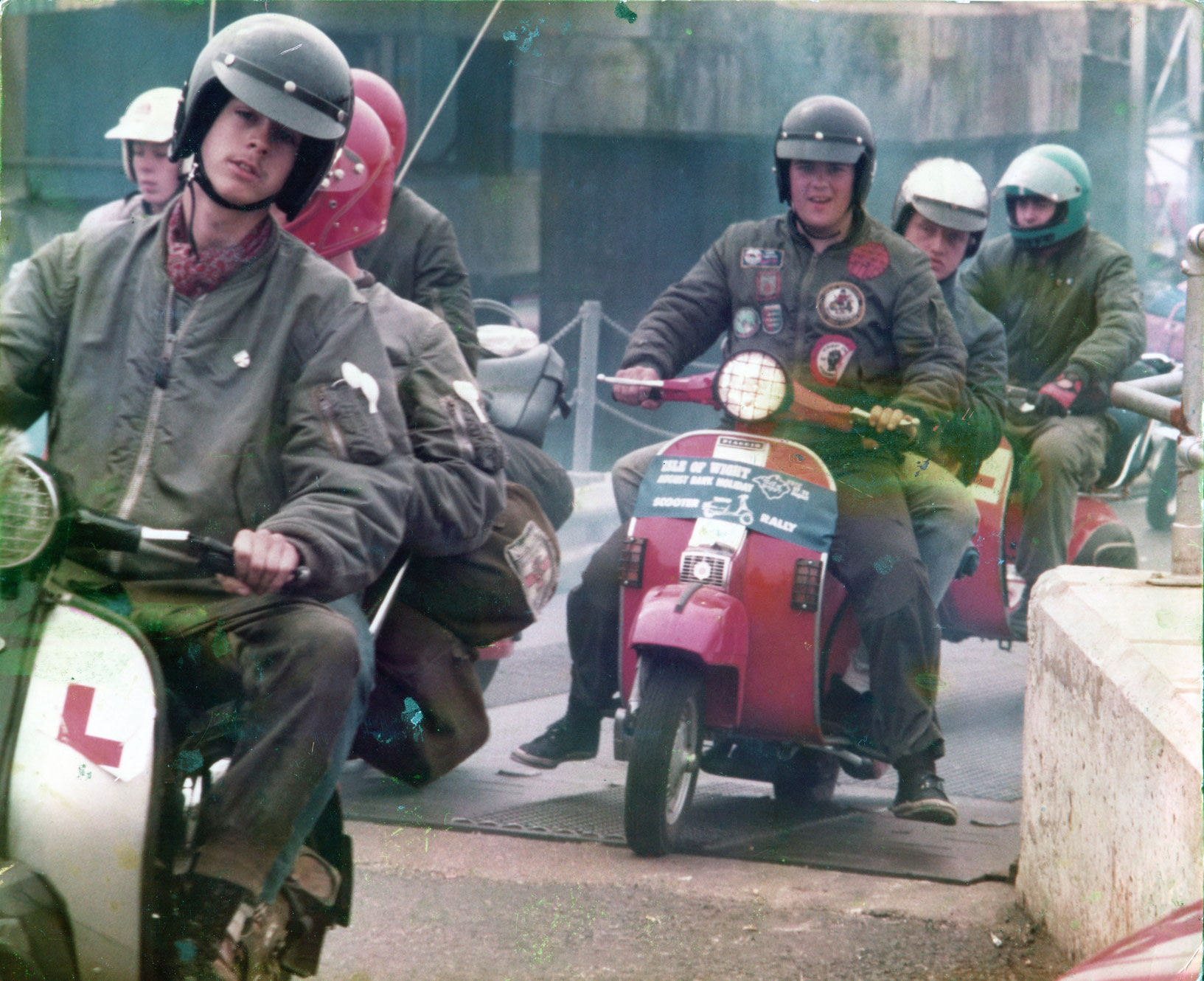 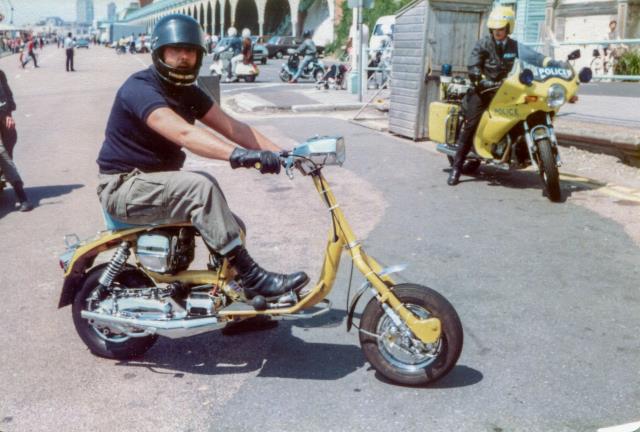 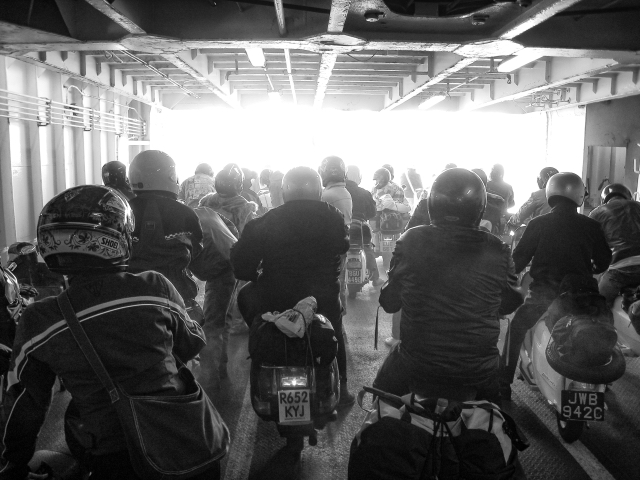 Posted Tuesday 28th May, 2019
Text by Mani
Photography © Courtesy of Martin ‘Sticky’ Round

Linkedin
RELATED ARTICLES
OTHER ARTICLES
Yesterday thousands gathered outside Buckingham Palace after news of the Queen’s death broke.
Following the announcement of an 80% hike in the energy price cap from 1st October, crowds gathered outside the offices of energy regulator Ofgem to protest and declare their intention to undertake a payment strike.
As the Scottish government announces a rent freeze, an activist with Living Rent who fought and won shares how they did it, and what must come next.
Birdy Chu reflects on documenting the historic moment in which the territory was formally passed back from the UK to China.
A new project is documenting formerly incarcerated people as they transition back into civilian life.
In his 2008 series, the photographer pictured himself as Angela Davis, Martin Luther King Jr., Malcolm X, and other prominent figures.