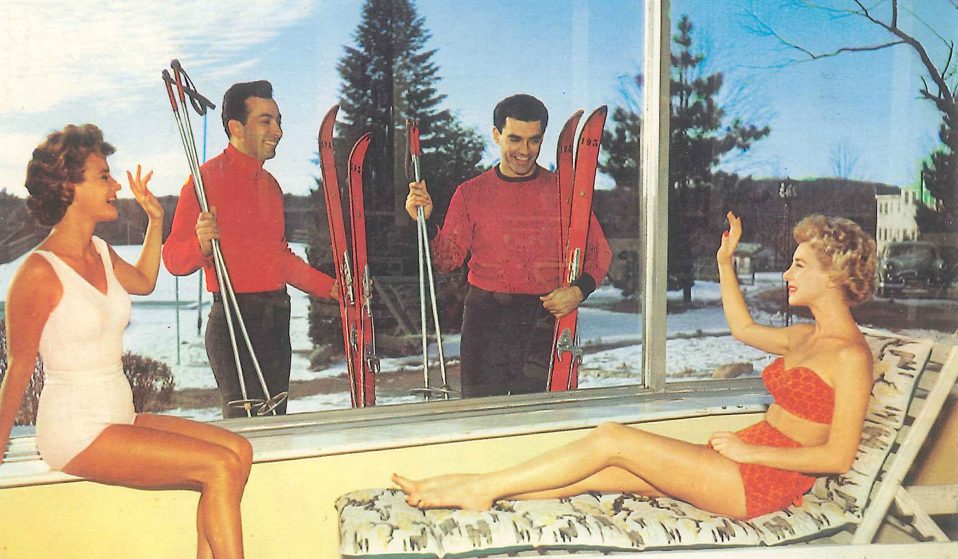 The Borscht Belt – otherwise known as the ‘Jewish Alps’ – was a New York holiday resort which was formed in response to rising anti-Semitism. Now, it lies deserted.

The Borscht Belt – otherwise known as the ‘Jewish Alps’ – was a New York holiday resort which was formed in response to rising anti-Semitism. Now, it lies deserted.

The Borscht Belt, otherwise known as the Jewish Alps, was America’s premier getaway during the 20th century. Established in response to abject displays of anti-Semitism nationwide, the Borscht Belt consisted of resort hotels bungalow colonies, summer camps, and boarding houses nestled into the Catskill Mountains of New York state.

At its height, the Borscht Belt was the height of a glamour all it’s own — an all-inclusive vacation replete with indoor and outdoor pools, golf, tennis, skiing, ice-skating, dance, and live entertainment from no less than Mel Brooks, Joan Rivers, Billy Crystal, and Rodney Dangerfield. While many Jewish-Americans born before the ’80s know the area well, the 1987 film Dirty Dancing became the cultural touchstone for all who had never lived it for themselves.

But like the Rust Belt, the Borscht Belt has disappeared, lost to the massive socioeconomic shifts that have taken place in recent years. For photographer Marisa Schienfeld, the shift quite literally hit home.

“My dad’s parents met up there in the 1940s, when my grandmother was hitchhiking between one town and another. At that time, the Catskills was pretty busy if you had the means or were going up there for a job. My mom’s parents met in Brooklyn and went up there for their honeymoon,” Scheinfeld recalls. 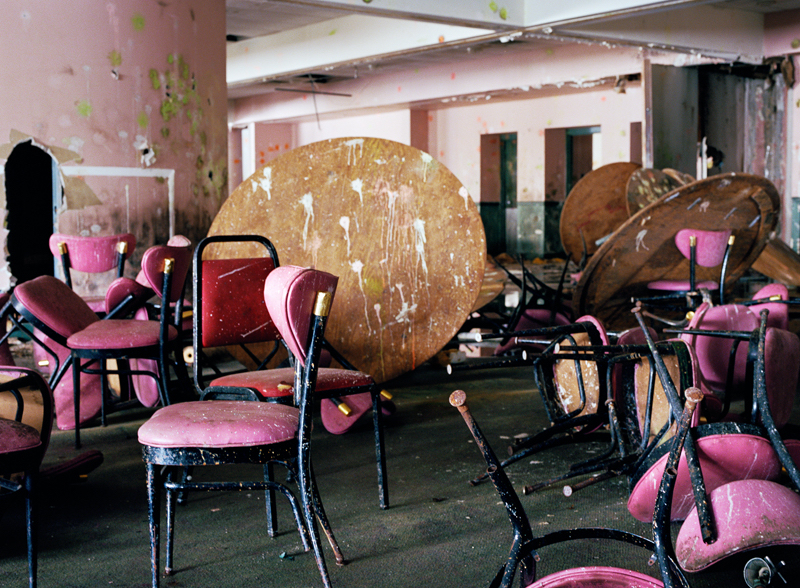 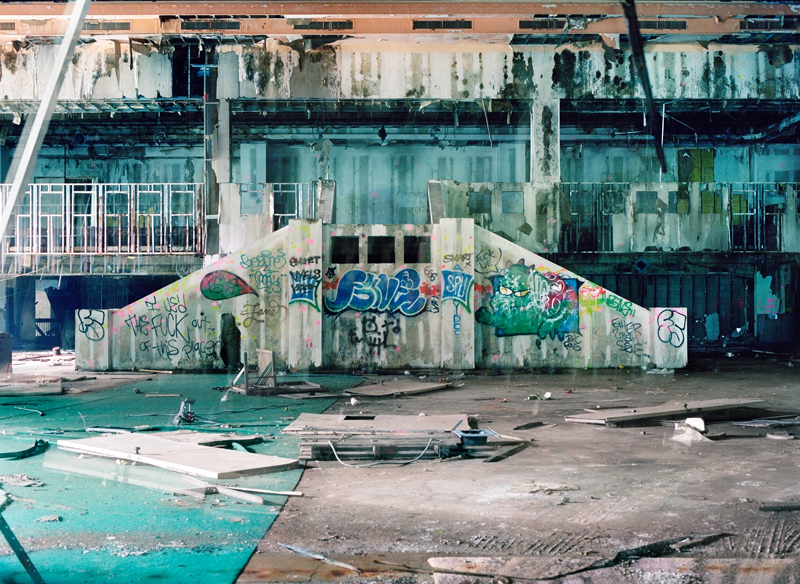 “Fast forward: my dad didn’t want to raise his family in the Brooklyn of 1980s. We moved to Monticello, New York, in 1986 when I was six years old. My grandparents owned a condo adjacent to Kutsher’s and we had access to the hotel. We would go swimming and my grandpa played cards. It was like mini-vacations on weekends, where I would engage in the quintessential Borscht Belt activities like bingo and shuffleboard.”

By the time Scheinfeld entered high school, the era had come to an end. She eventually decamped to New York City, then to San Diego, where she began working on her Master’s thesis. “I was grappling with what I wanted to say as a photographer and my mentor, Arthur Ollman said four words that lit the fire: ‘Shoot what you know,’” Scheinfeld remembers.

She returned to Monticello to embark on a series of photographs that would become The Borscht Belt: Revisiting the Remains of America’s Jewish Vacationland (Cornell University Press). “The project started as re-photography, remaking old postcards, to measure time like a ‘Now and Then.’ I did this for a month or two, and then I got bored,” she says.

“What would happen is I would go with my archival image and agenda, then stop in my tracks when I would see something that warranted to taking a picture of it — and that’s how the whole series evolved. I realized there was more of a story to tell.” 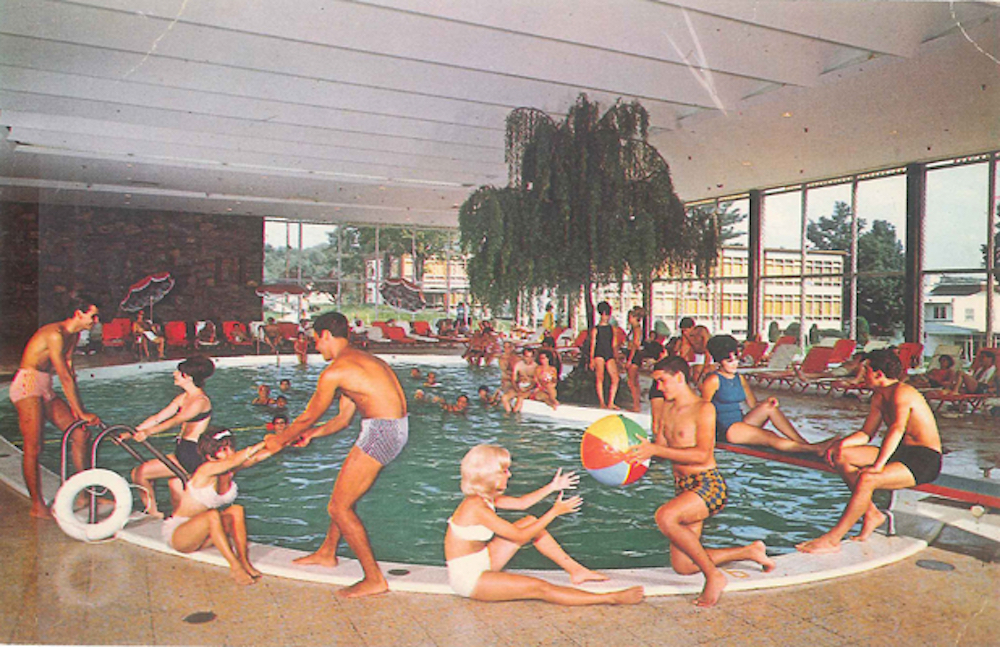 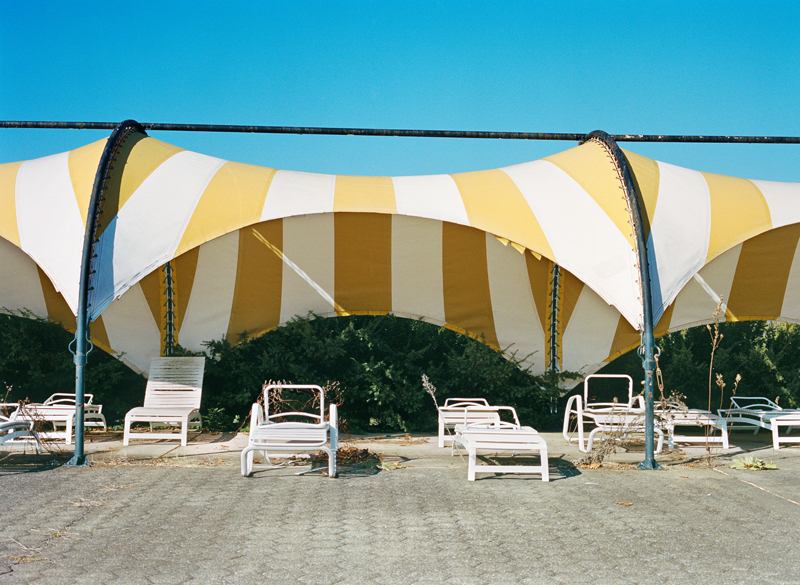 Over a period of five years, Scheinfeld did just that, documenting the remains of a once-vibrant world that continues to disappear. “They just finished levelling Grossingers, the hotel on the cover of the book,” she says. “That entire complex, which had its own airport and post office, it is gone. It’s a weird, strange place.”

Scheinfeld dug in deep, talking with historians, locals, strangers, and family members to unearth a vital history that has all but disappeared. “I feel like an archaeologist, looking at these off-the-beaten-track places — but I am not interested in tampering with the surface or constructing the scenes,” she says.

“These photographs are like these still lifes arranged by time, change, Mother Nature, and other people who have been going in there to hang out, party, photograph, live, and steal. Most people didn’t understand what I was doing at first. I would often get the remark, ‘There’s nothing there. Why do you want to go there? You’re crazy.’

“My answer is, “Well, you’re not looking.’ None of these images are empty. Here are family histories, unions, marriages, and romances. You can see that these places are worn with life, even though they are worn with decay. There are histories of Jews in America creating a space born out of anti-Semitism.” 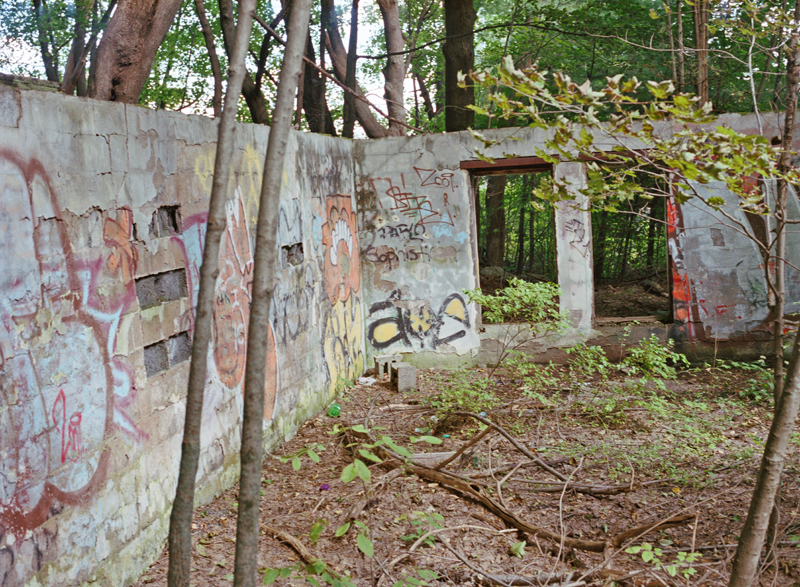 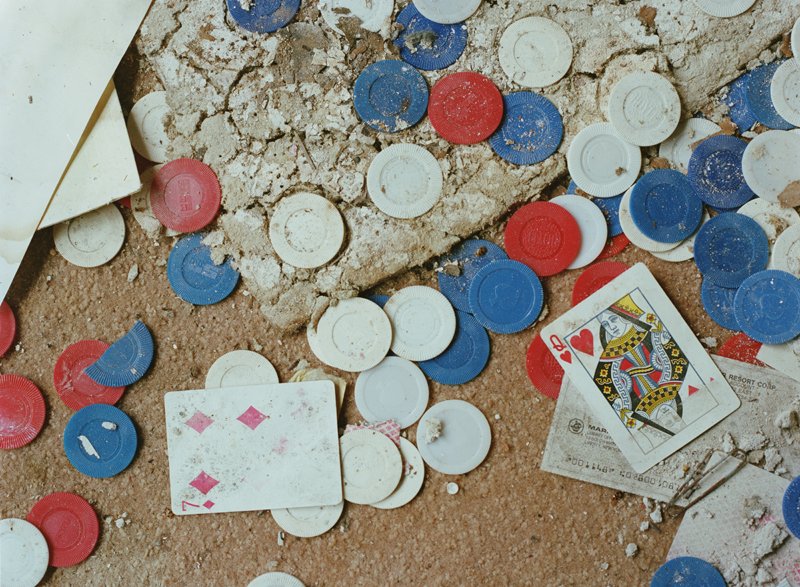 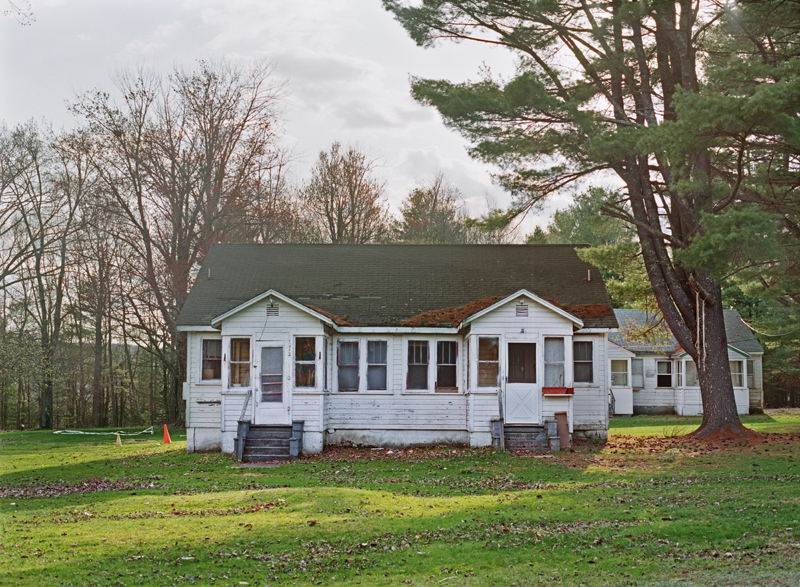 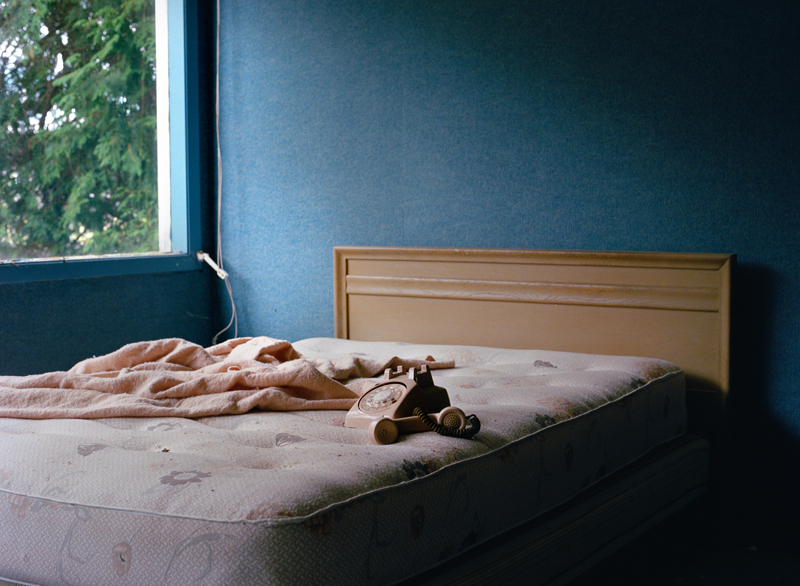 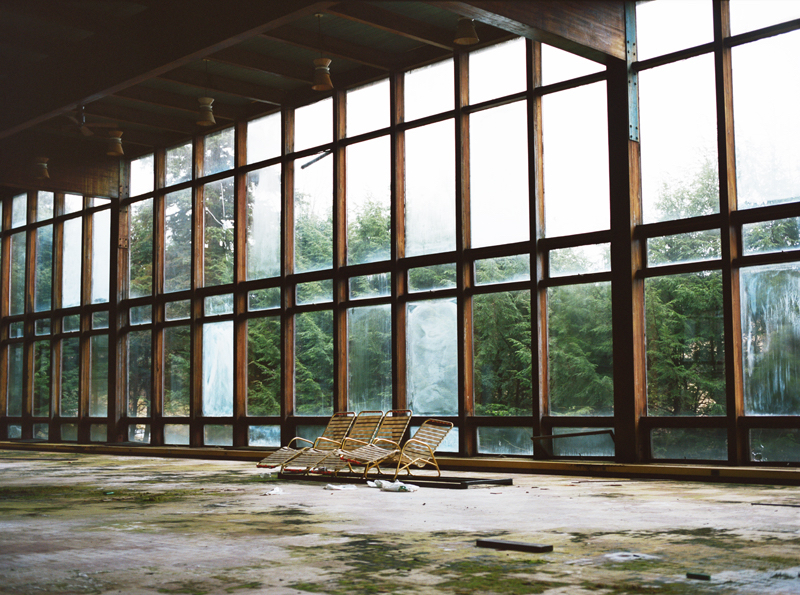 Linkedin
RELATED ARTICLES
OTHER ARTICLES
In the latest instalment of Photographers in Conversation, the chronicler of raves, protests and beyond explains why he’s drawn to such specifically visceral environments.
The past five years have seen a staggering increase in foodbank usage across the UK. Now, staff fear things are set to get much worse.
With inflation now at a 40-year-high of 9 per cent, demonstrations organised by TUC took place to demand action from the government.
Photographer David Hoffman recalls documenting the extreme wealth inequality around Tower Hamlets and Hackney int the 1980s.
Proposals to introduce a minimum GCSE threshold for student loans will disproportionately affect those from marginalised backgrounds.
Photographer Arthur Grace recalls travelling through the Soviet Bloc and finding ways to evade the surveillance of his work.