Art & Culture / The teen who captured the Black Panther Party 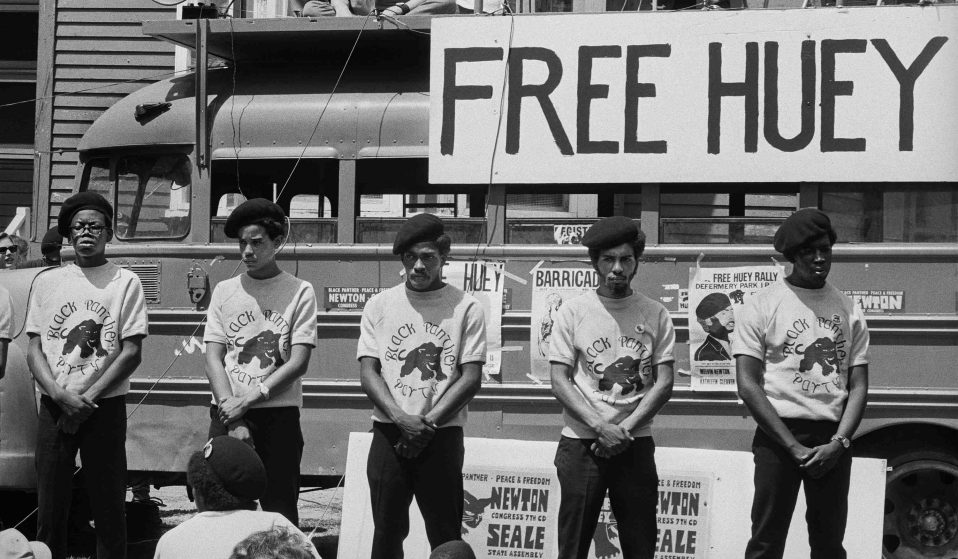 Jeffrey Henson Scales intimate portraits and protest images of the BPP and its leaders offer a rare insight into organisation at a time of societal upheaval.

Jeffrey Henson Scales intimate portraits and protest images of the BPP and its leaders offer a rare insight into organisation at a time of societal upheaval.

For almost half a century, Jeffrey Henson-Scales thought the FBI had stolen photographs he had made of Black Panther Party (BPP) in 1960s Oakland. It was a reasonable assumption, considering the G-men who were often staked out in front of his childhood home, surveilling and filming the family without their consent.

Scales’s parents were artists and activists. His mother, Barbara, was a painter and filmmaker with friends in the Communist Party during the height of the “Red Scare”. His father, Emmet Scales Jr., was an audio engineer and co-manager of the legendary hungry i nightclub in San Francisco during the ‘50s and ‘60s, who was friends with Eldridge Cleaver before he joined the Panthers.

In 1963, the Scales family moved from Haight-Asbury to an impressive house in the Berkeley Hills with a magnificent view of the San Francisco Bay. In 1967, his parents hosted an event in their ballroom to celebrate the transition from Stokely Carmichael to H. Rap Brown as chair of Student Nonviolent Coordinating Committee, further establishing the family’s rightful place among activists and the political elite. 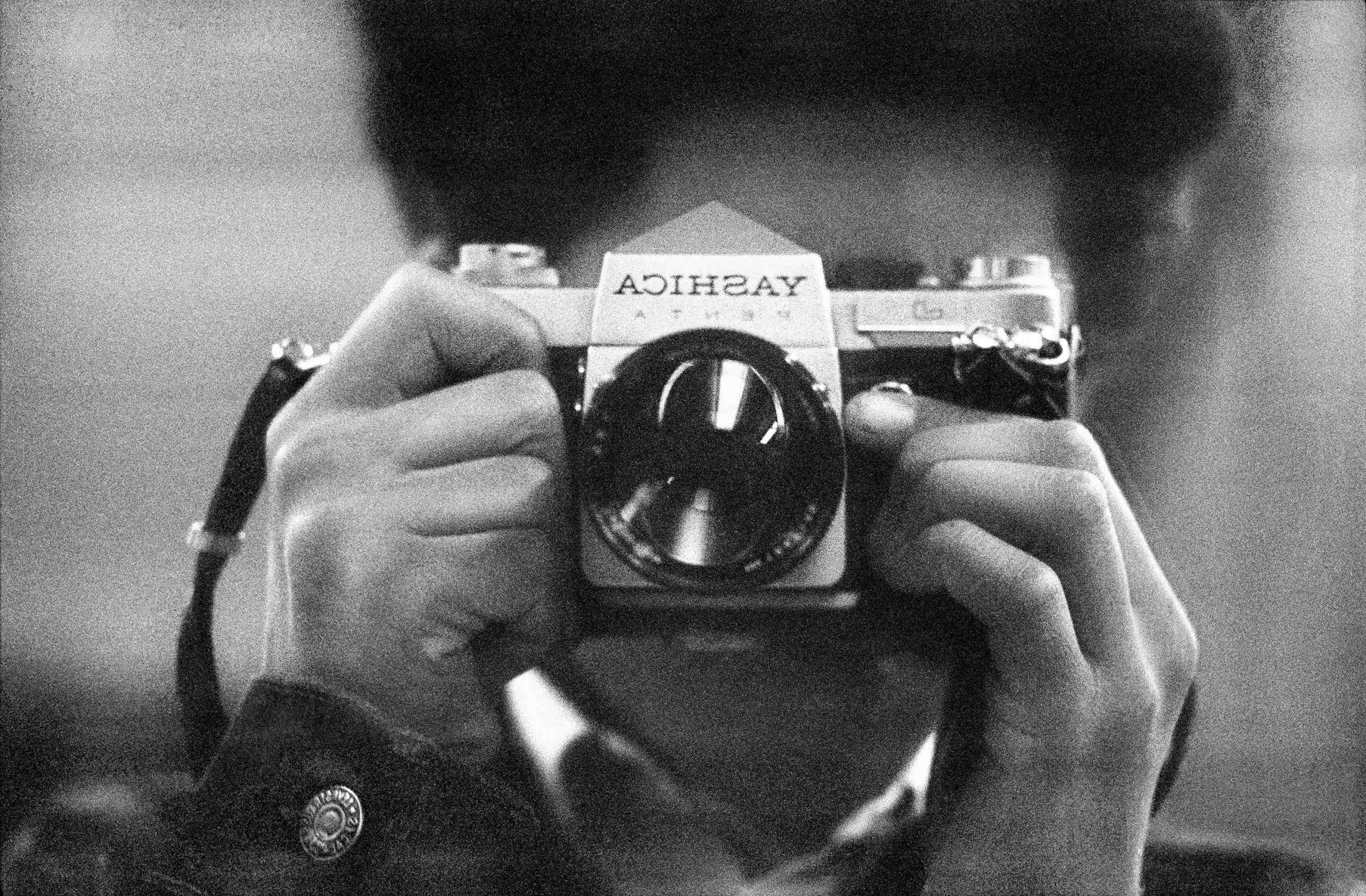 Scales, who had accompanied his parents on the picket lines in his youth, remembers his political consciousness being raised while visiting family in the Midwest during what became known as “The Long Hot Summer of 1967”. While the Summer of Love blossomed among San Francisco’s flower children, over 150 violent uprisings broke out in Black communities nationwide as citizens took to the streets to protest systemic racism.

“Having grown up in Berkeley in a fairly privileged environment, I hadn’t spent time in poor inner city communities. Going to Chicago and Detroit and seeing the way the police were treating people had an effect of immediacy,” says Scales, then 13, who captured the world he saw with the Kodak Instamatic camera his paternal grandmother gave him. 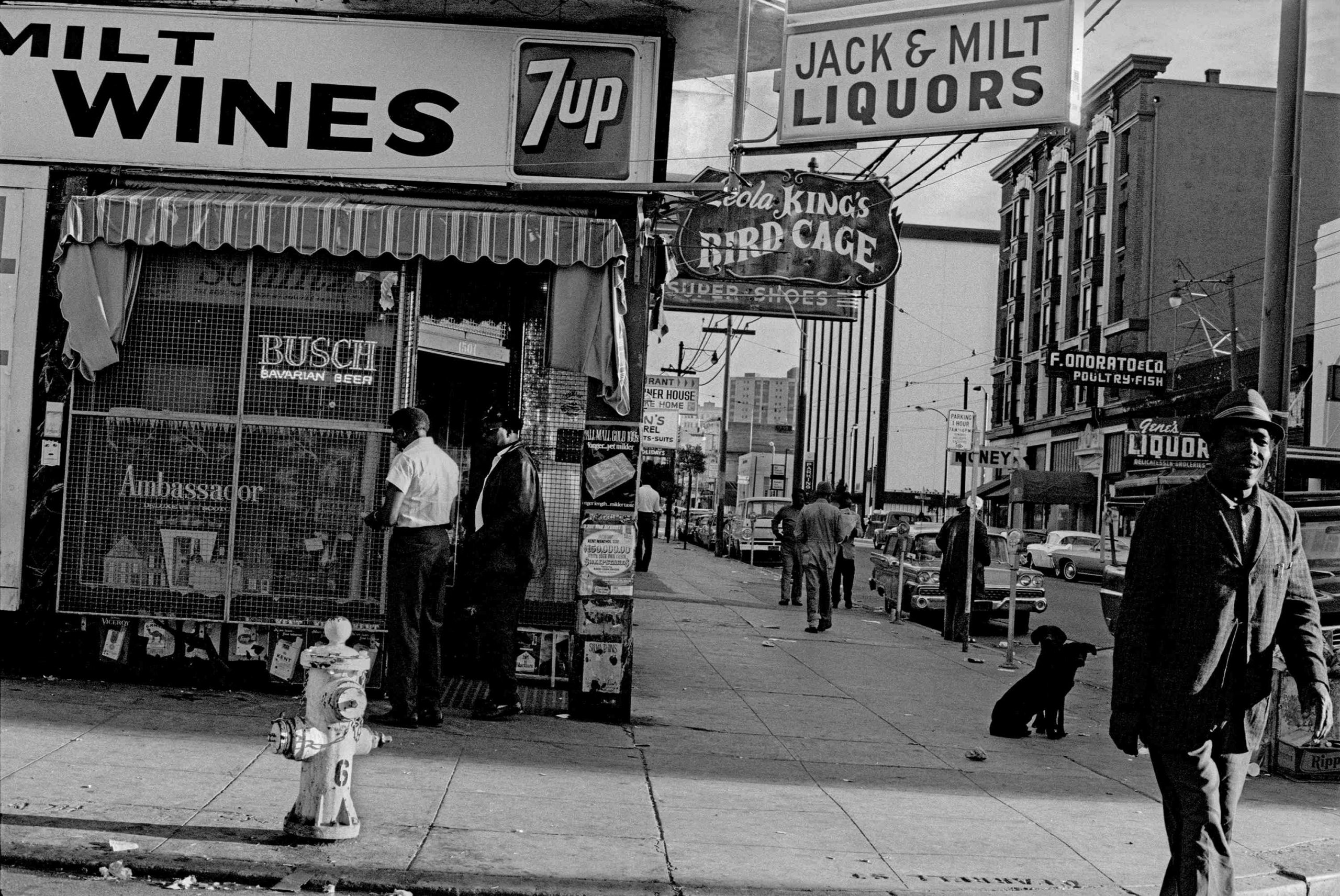 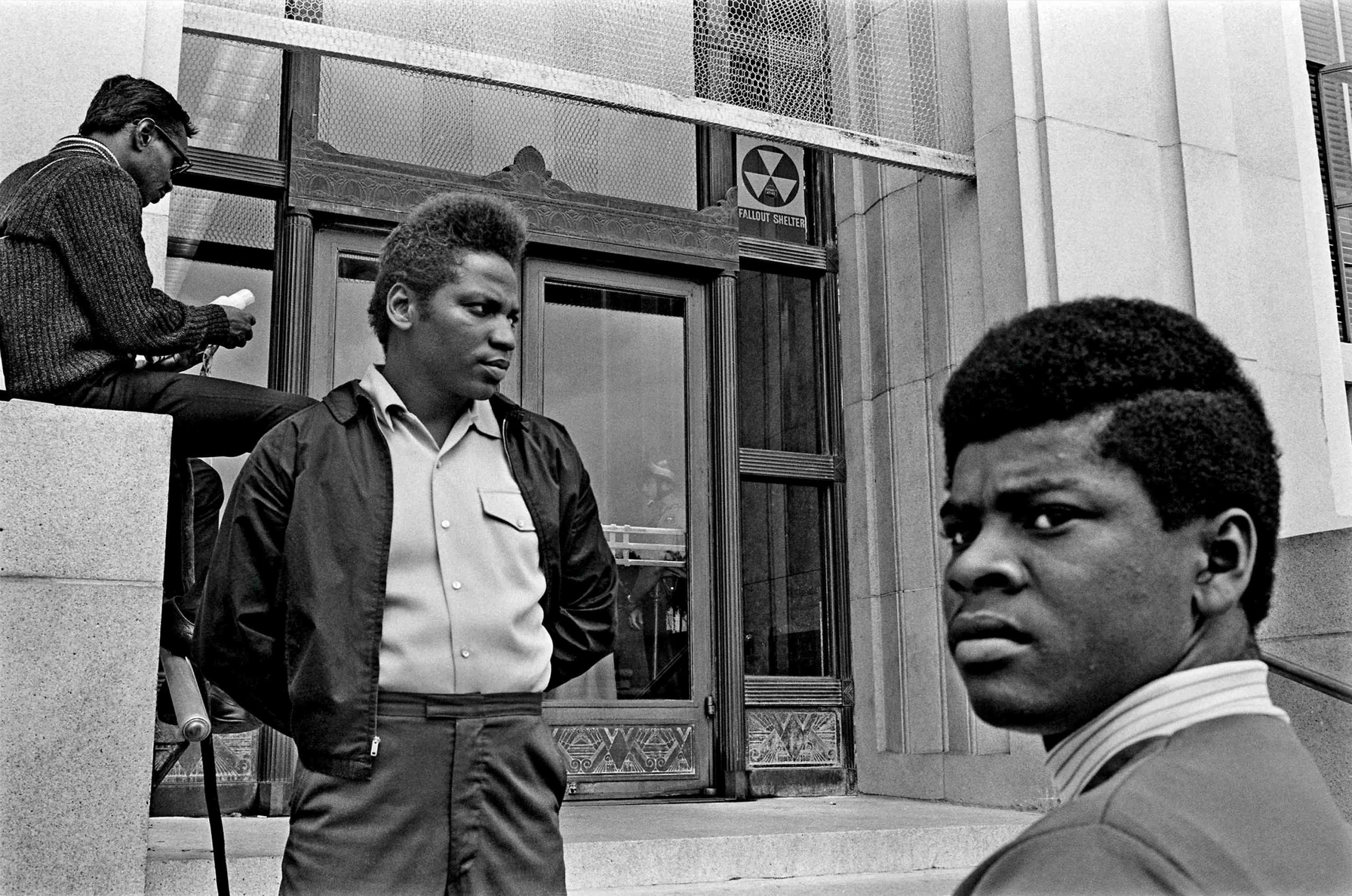 Panther supporters on the steps of the Alameda County courthouse waiting to attend the trial of Huey Newton, Oakland, CA., July, 1968.

That summer Scales began making social documentary photographs, a practice that would flourish upon his return home. His father, a hobbyist, built a darkroom in the home, and gifted his son a Leica at age 11. “He also gave me and my older brother a box filled with every issue of LIFE magazine from 1936 to 1966,” says Scales, who carefully studied its pages, training his eye with the work of photojournalists like Gordon Parks, W. Eugene Smith, and Margaret Bourke-White 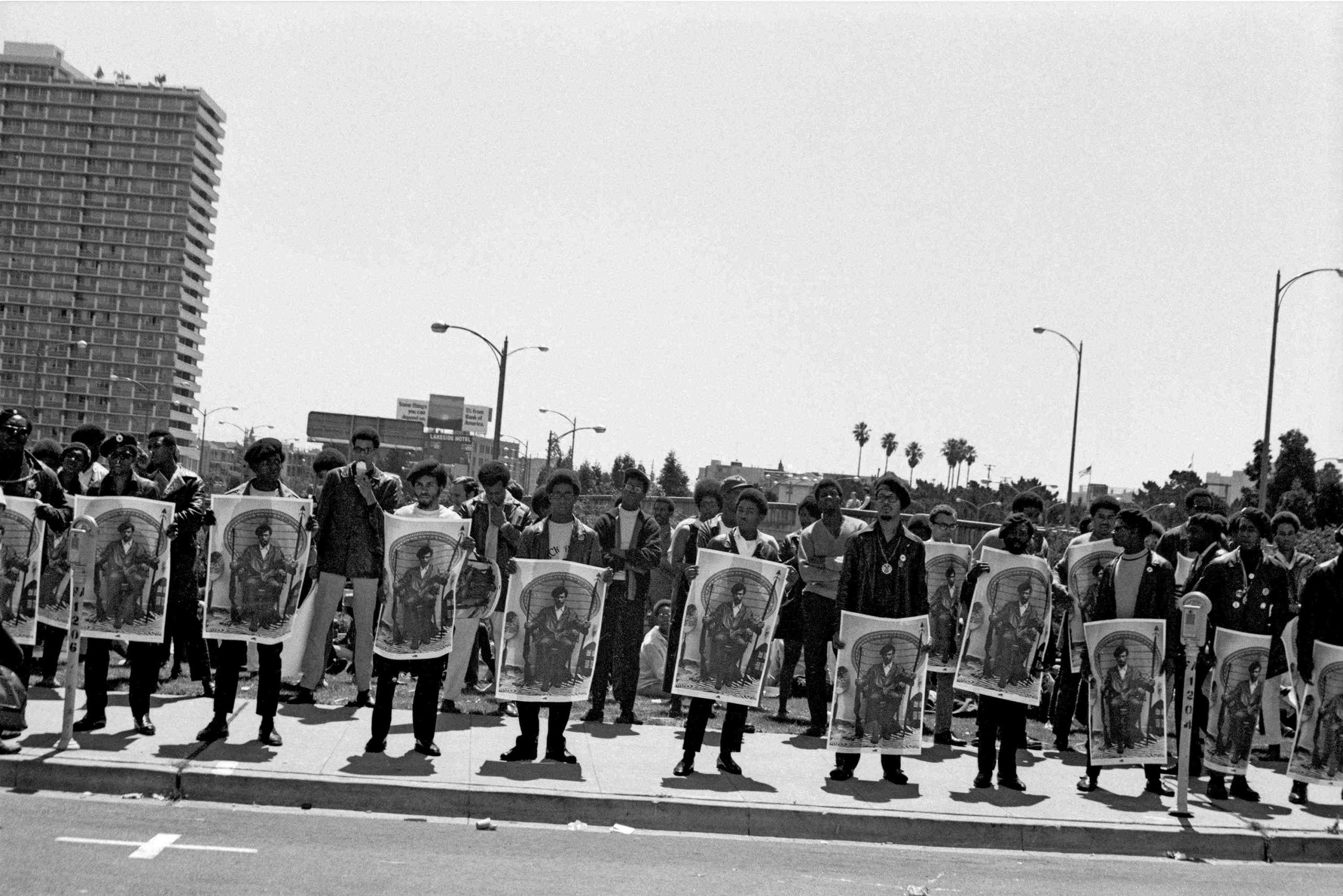 But it was the Ten Point Platform and Program and organising prowess that set the government and media on edge. The BPP quickly established local chapters in 68 cities in 40 states, calling for full employment, reparations, housing, education, military exemption, end to police brutality and murder, freedom for the incarcerated, Constitutional rights during trial, and self-determination.

Seale encouraged the teen to contribute to their newspaper, The Black Panther. Working with editor Cleaver, art director Emory Douglas, and official photographers Stephen Shames and Pirkle Jones, Scales learned photojournalism from the ground up. From 1967 to 1971, Scales documented the Panthers at the height of the Black Power Movement, chronicling what FBI Director J. Edgar Hoover described as “the greatest threat to the internal security of the United States”. 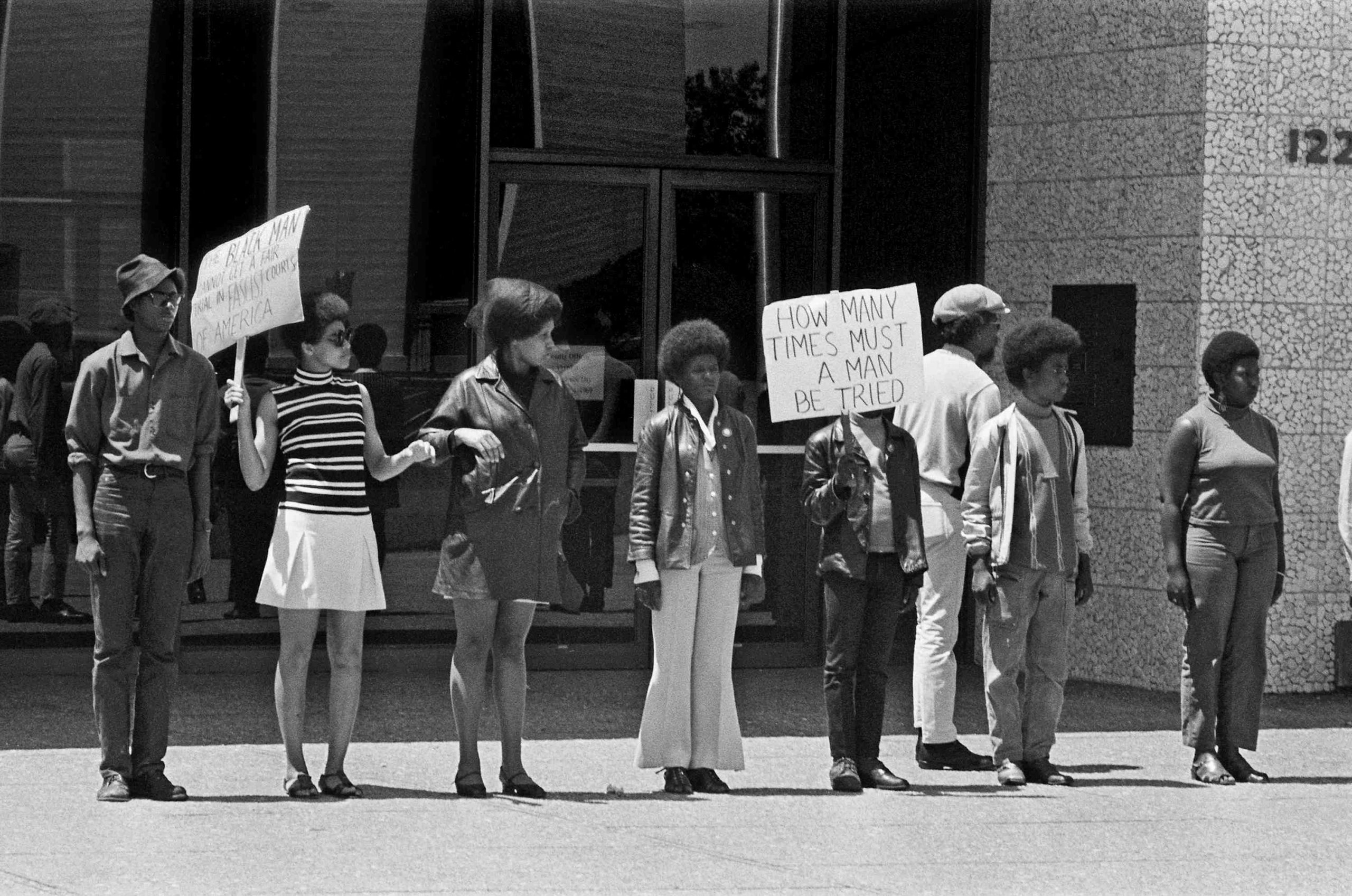 Panthers during a Free Huey Rally outside the San Francisco Federal courthouse on May Day, 1969.

The photographs disappeared until 2017, when the family discovered 40 rolls of film safely hidden away in the recesses of an old filling cabinet. Here lay a lost cache of historic work, chronicling the Huey Newton trial, the Revolutionary Conference, and the bullet-riddled walls where Oakland police gunned down Lil’ Bobby Hutton after the 17-year-old BPP member surrendered.

Collected in the new book, In a Time of Panthers: Early Photographs (SPQR Editions), Scales’s powerful and poignant portraits of BPP leaders including Newton, Seale, Carmichael, Cleaver and his wife Kathleen, John Huggins, and Elaine Brown offer a window into another time when a youth-dominated movement spoke truth to power and were viciously persecuted in turn. Scales observes, “The first time and probably the last time that Republicans got on board for gun control was when they passed the 1967 Mulford Act, which made it illegal to open carry in California – and that was because of the Panthers.” 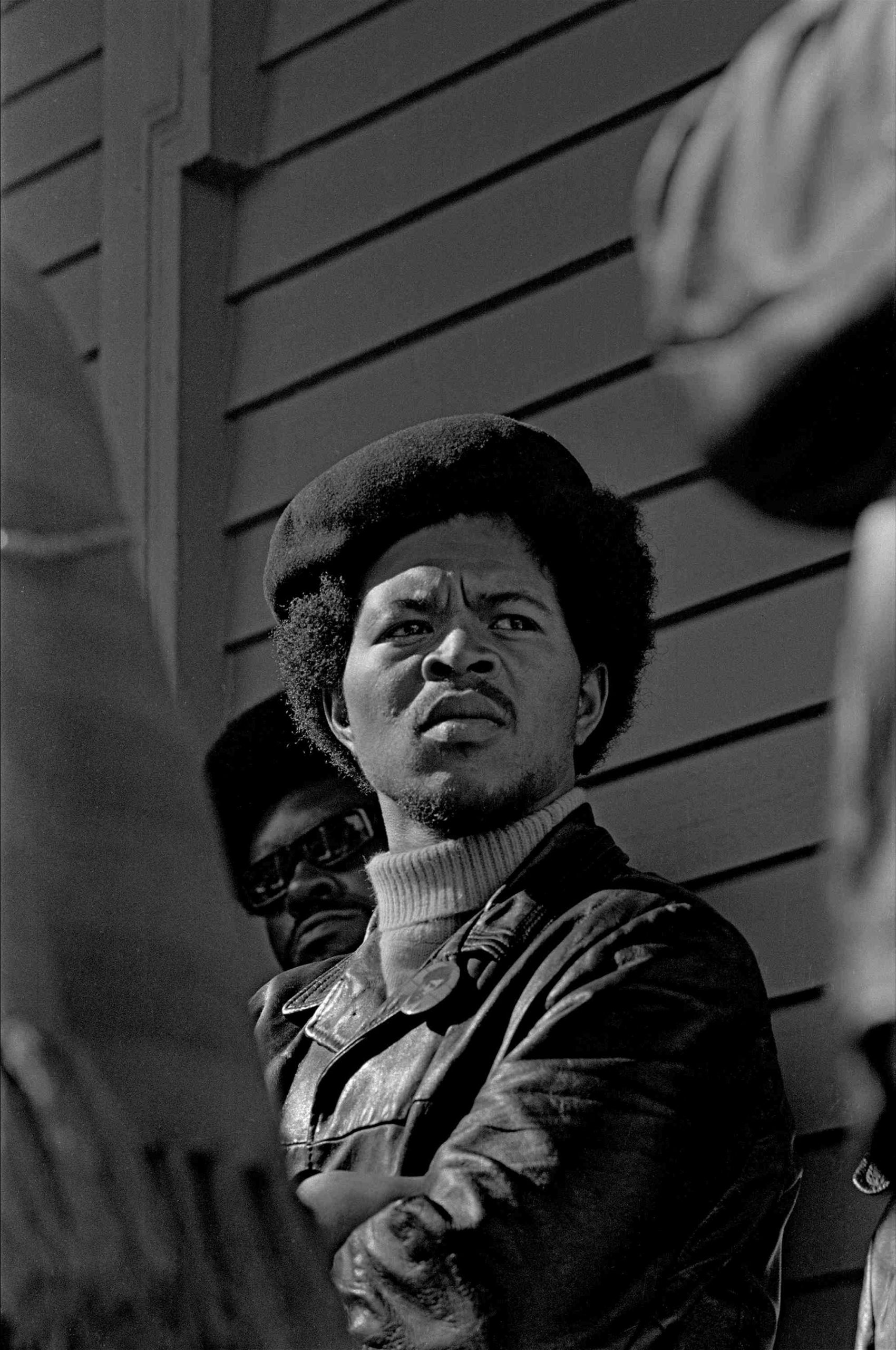 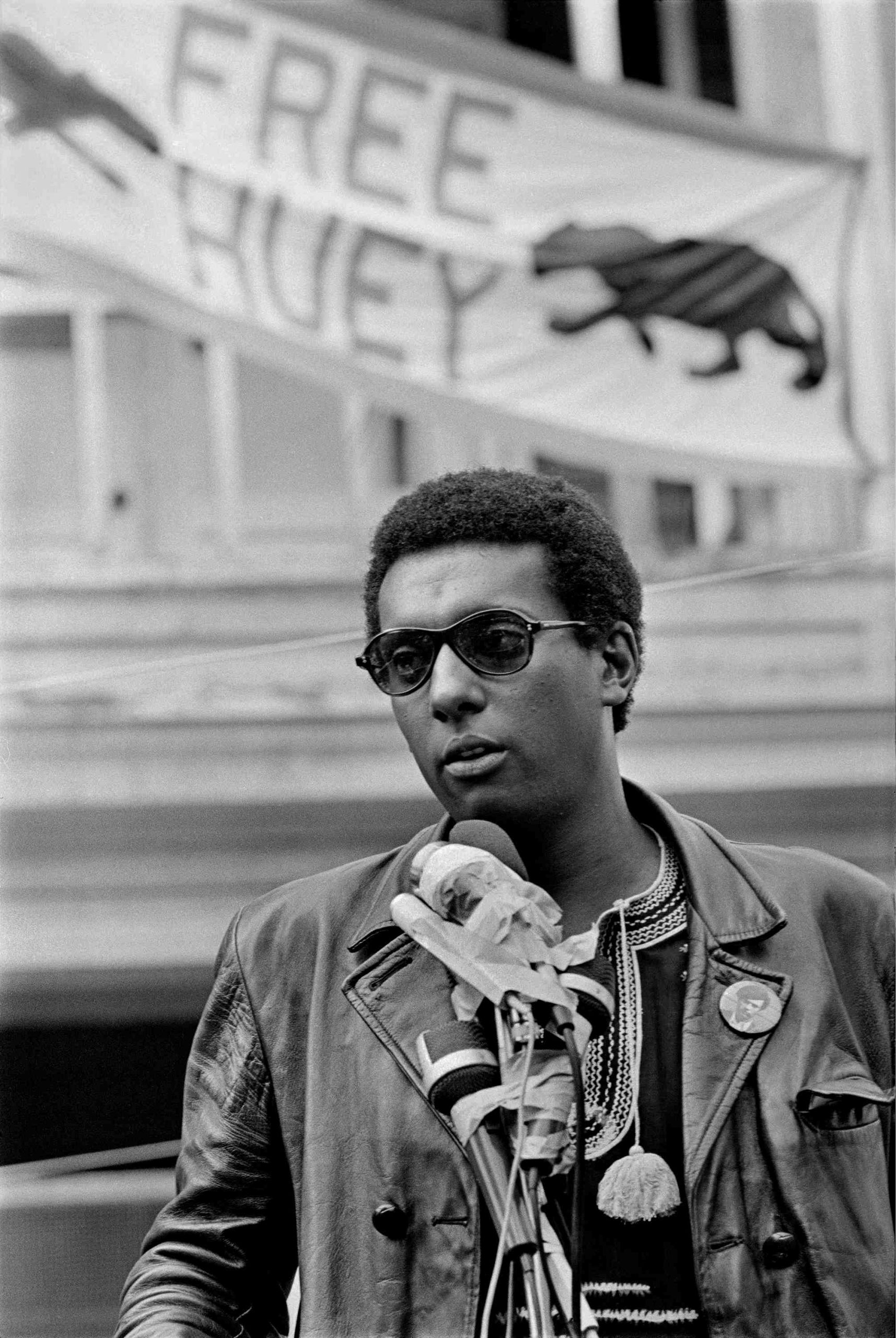 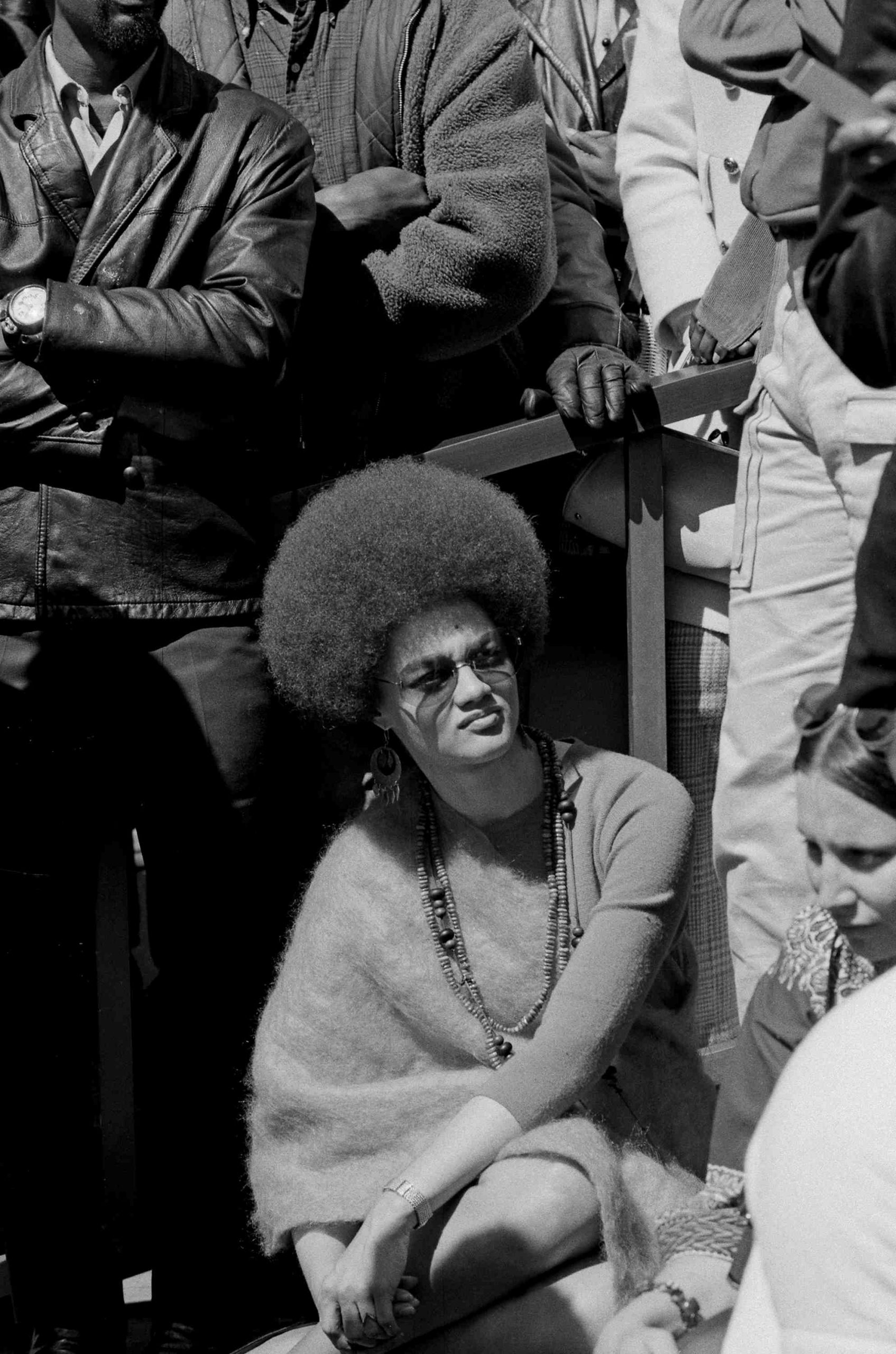 Kathleen Cleaver, National Communications Secretary of The Black Panther Party at a rally at Black Panther Rally to Free Huey Newton at Federal Building in San Francisco California in May 1969. 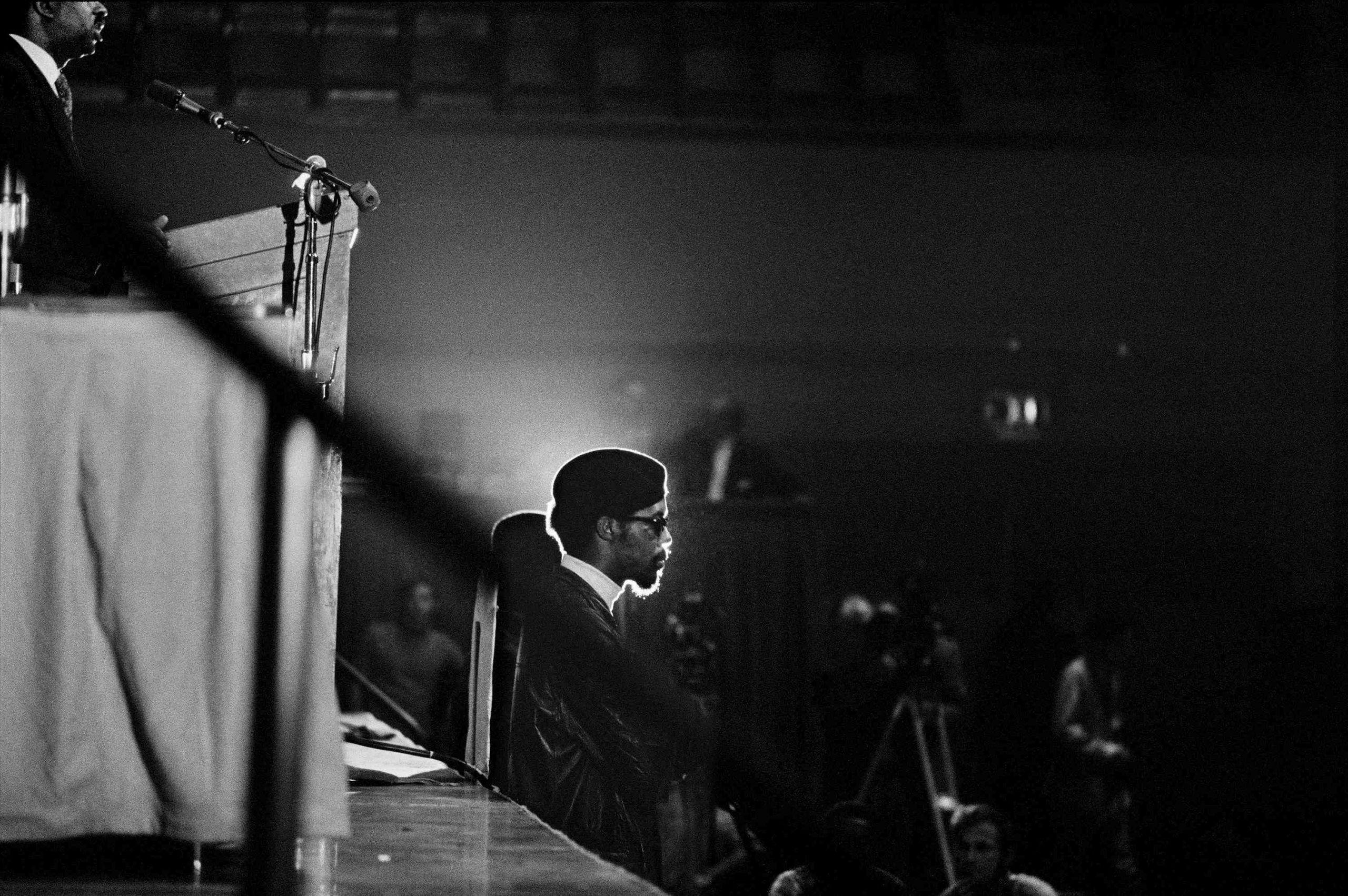 In a Time of Panthers: Early Photographs is available on SPQR Editions.

Linkedin
OTHER ARTICLES
Activists and campaigners are fighting back against new laws that would seriously undermine the ability to take industrial action, calling it an attack on fundamental workers' rights.
After fleeing the war in Ukraine, people are finding it impossible to secure affordable and decent housing in the UK.
Following the release of his debut single, Deyaz talks battling addiction, dealing with his struggles through music, and building a budding music career from his living room.
A new law change is enabling Britain’s donor-conceived children to know the truth about their origins – but campaigners say the fertility industry must do more to protect people.
Since 2007, Gideon Mendel has made 20 trips to document floods in 13 countries. The result is an alarming record of what has already been lost to the climate emergency.
A new podcast is opening up the conversation between trans women and trans amorous men in the hope of building coalitions.