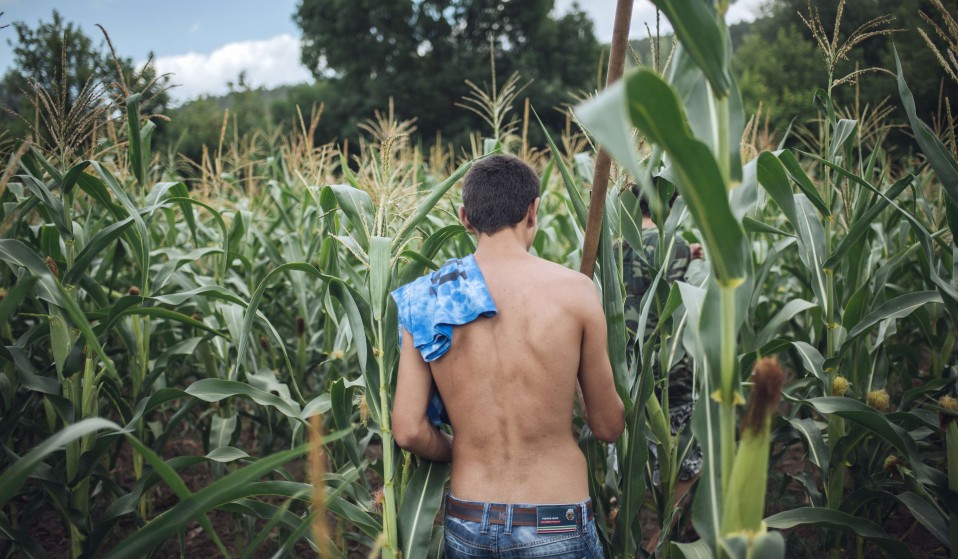 Transnistria’s first generation are finally becoming adults. With few prospects, they’re finding their way in a world that doesn’t recognise their identity.

Transnistria is a self-proclaimed nation that broke away from Moldova in 1990. Now that its first generation are becoming adults – with few prospects and an economy in free-fall – they’re finding their way in a world that doesn’t recognise their identity.

On a narrow stretch of land between north-east Moldova and Ukraine lies a country that, according to the United Nations, doesn’t officially exist. Transnistria may have its own passport and currency, but they’re not valid anywhere else.

The region declared its independence from Moldova in 1990, the same year that photographers Anton Polyakov and Anya Galatonova were born there. With a population of less than half a million, the country is still too young to have its own distinct culture.

But as first-generation Transnistrians, Anton and Anya wanted to document the sliver of identity that does belong to them – one that, much like the place itself, often goes unacknowledged. 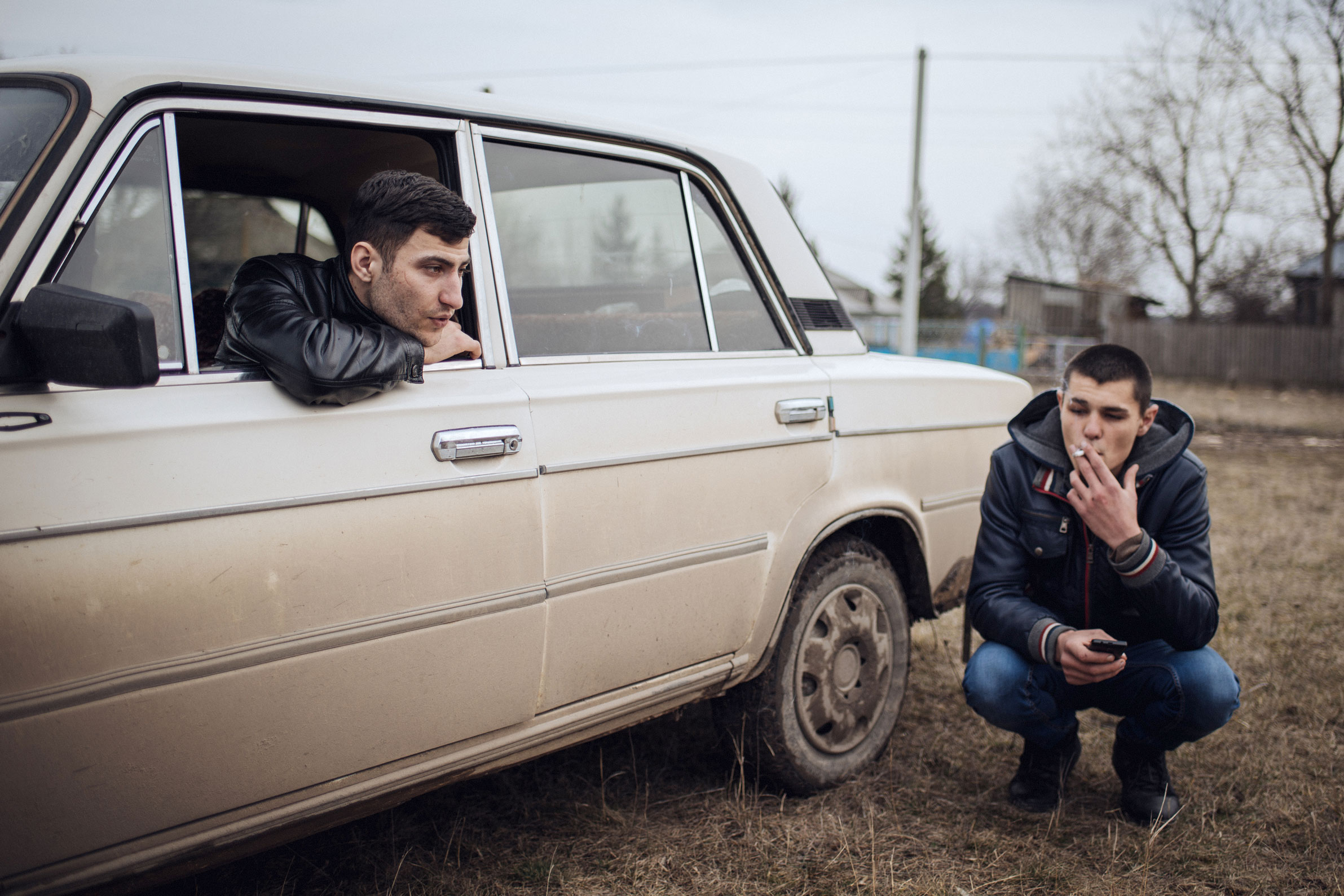 “The biggest misconception is that Transnistria is some black hole or a museum of Soviet symbols,” says Anton. “Journalists and photographers come here for a hot image, looking for traces of post-conflict trauma or even something akin to North Korea. Often they’ll be disappointed – residents here just live their life in the same typical way – and so they never get beneath the surface.”

To dig a little deeper, Anton and Anya – who work as freelance photographers in the capital, Tiraspol – gravitated to Transnistria’s countryside, where their grandparents spent most of their lives. It’s also where their strongest memories reside: the vast cornfields, rickety tree houses and roaring bonfires of their youth. 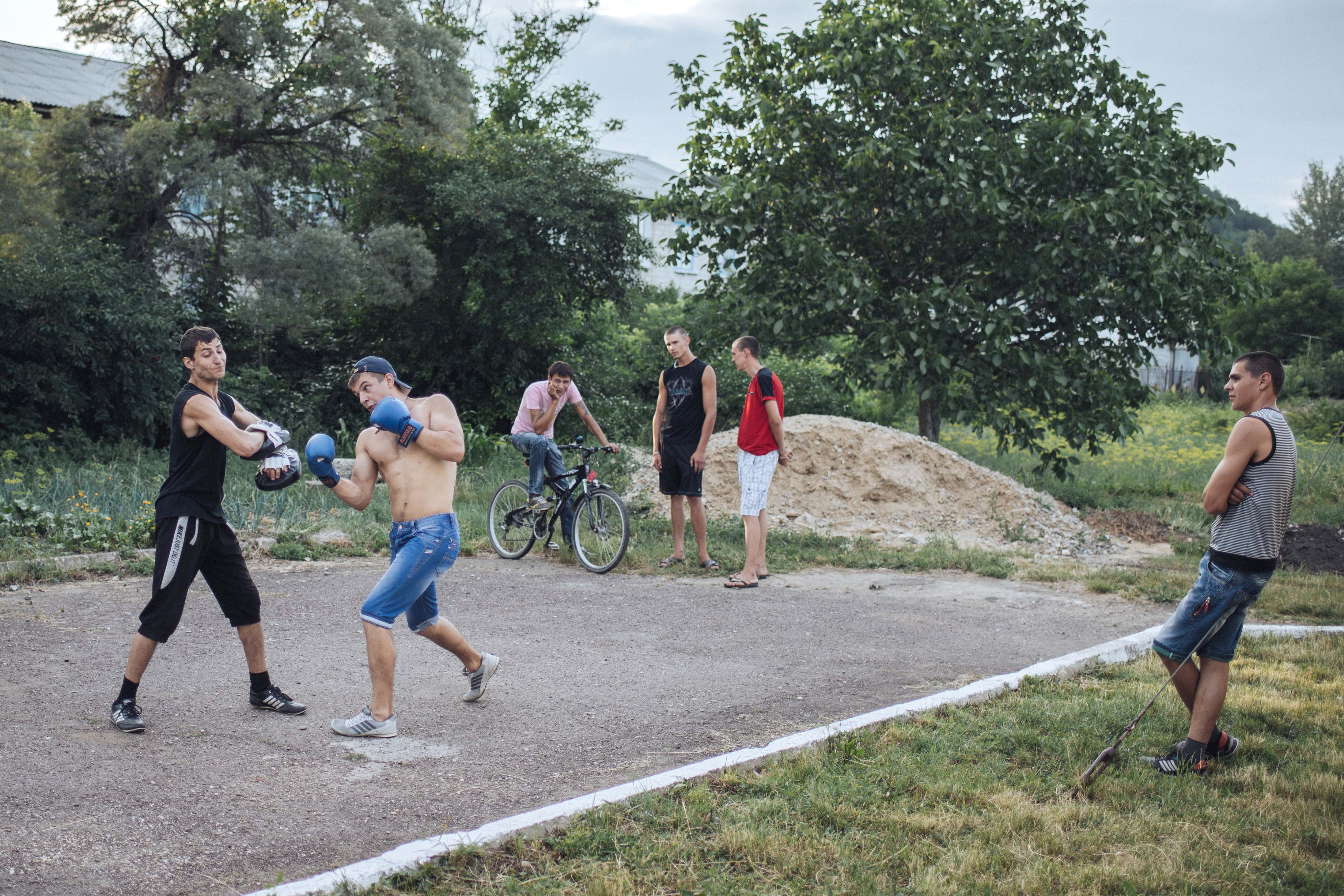 Young men hang out in Camenca. They come to its stadium several times a week to work out in preparation for military service or simply just to stay active.

The pair travelled all around the republic before settling on Hristovaia, a remote village in the north surrounded by hills and forests.

“People there have the most pronounced connection with the place and it’s harder for them to leave,” says Anya. “Life in these villages is almost never mentioned anywhere and we were curious to know how people live, what they do and what they think about.”

Hristovaia is a close-knit place where locals rarely encounter strangers, so Anton and Anya needed an ‘in’. They used social media to find Yura: a kind-hearted 21-year-old with dreams of working in the military – often the only way out of rural life for young Transnistrian men. 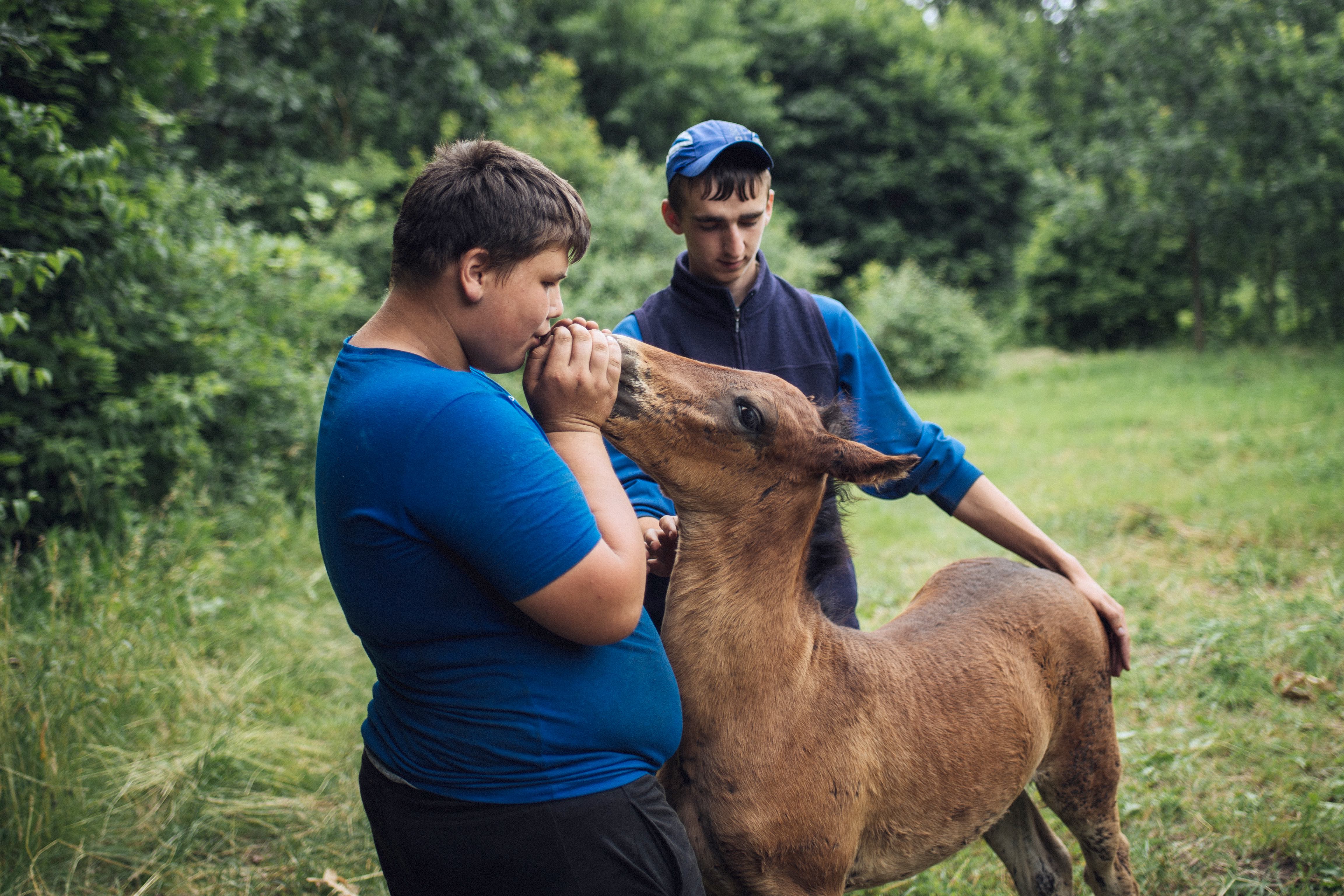 Maxim and Vasya embrace a newborn foal as it stands for the rst time. In Rotar village, horses are considered key to country living – not just for farm work but as a means of transportation.

Anton and Anya initially camped on the edge of town, making themselves just visible enough so locals would get used to their presence. Over time, they began staying at Yura’s family farmhouse, photographing his daily life as he introduced them to a network of other young people.

“It was important to convey the atmosphere of alienation these kids experience from the rest of the world, the uncertainty ahead of them,” says Anton. “But at the same time to capture their closeness and warmth with each other, their love for the place where they call home.”

Sometimes the young men could be quiet and naive, other times they were brutish and wild, so the photographers were drawn to scenes that reflected that contrast – whether it was hiding out in abandoned vehicles or drinking vodka among grazing cows. 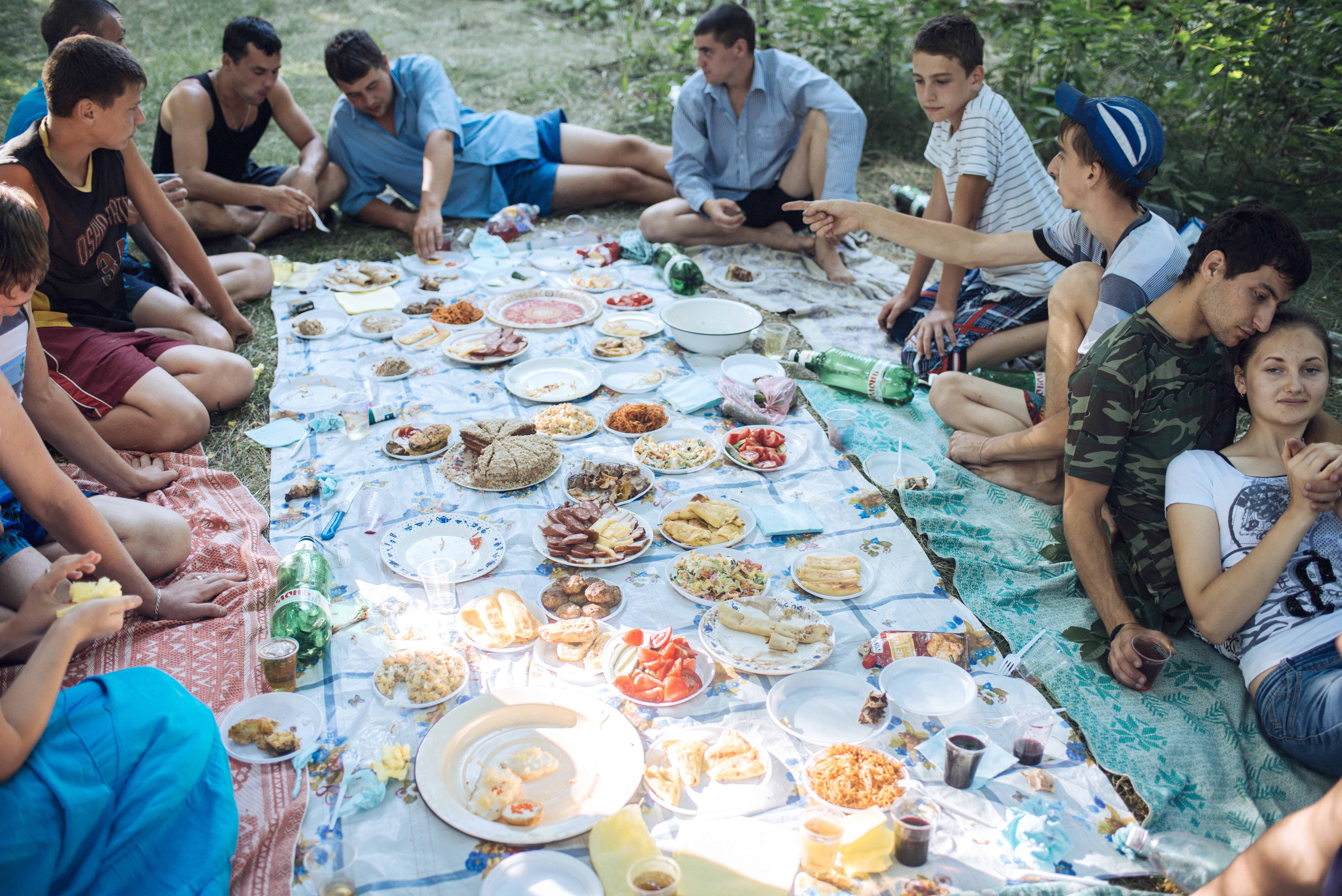 Yura and his girlfriend Tania (embracing on the right) hold a farewell party to mark Yura’s recruitment to the army.

One day, to celebrate Yura’s recruitment to the army, he threw a farewell party in the neighbouring village of Rotar – a place where the typical high-school class contains just three students, where a bus stop becomes a teenage hangout purely because it has a bench and lighting.

The encounter introduced a new character to the project: Vasya, an unsettled and slightly awkward soul unlike anyone else.

Vasya’s sister had long ago left to start a new life in Kiev, where she works in a restaurant – and so his visits there opened him up to a different world. After finishing school, he studied music in the capital but, unable to adapt, ended up coming home. 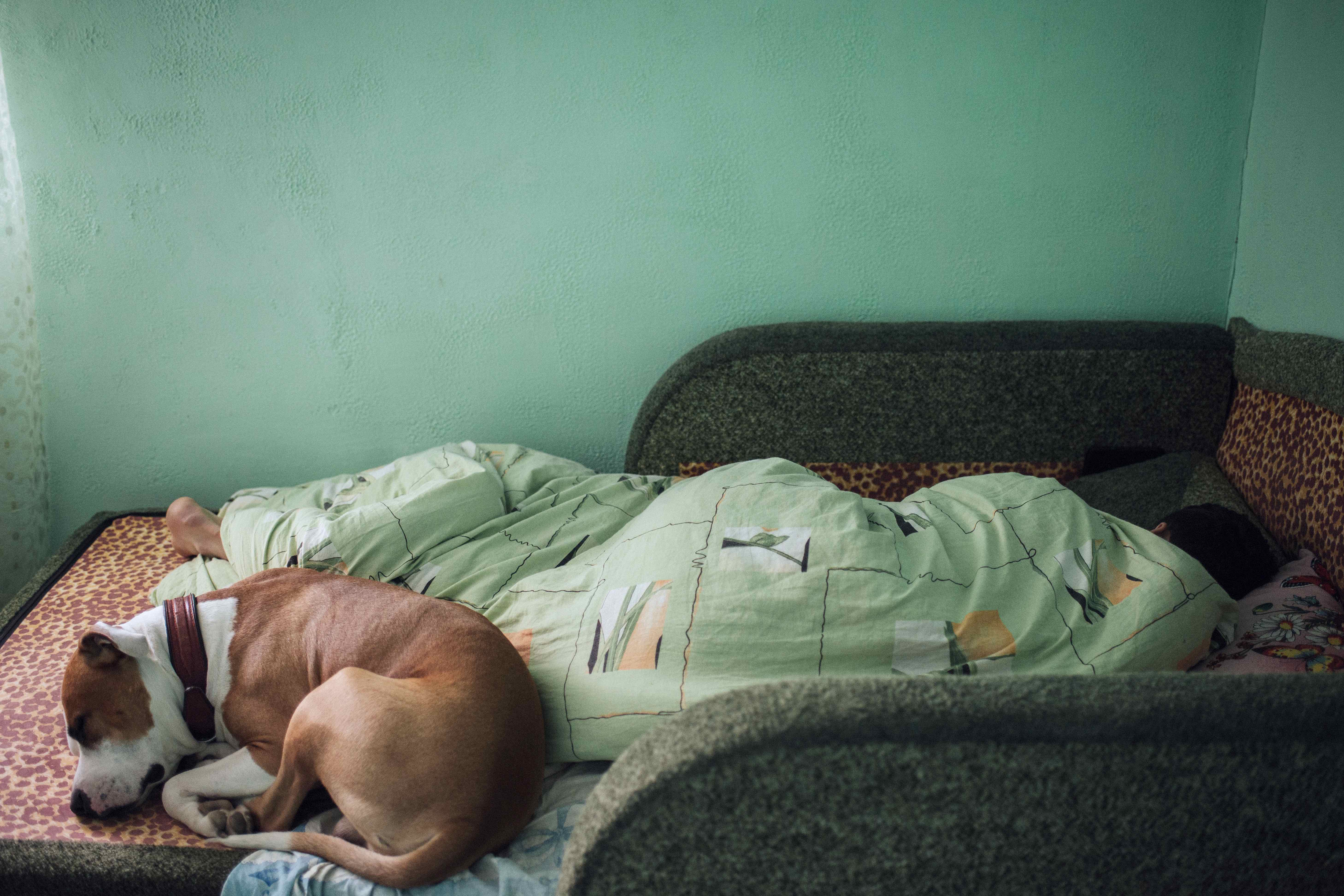 Yura sleeps with his dog Derek at his parents’ home in Hristovaia, where he has lived all his life.

“Vasya works by helping his parents on their farm and loves to play with children in the village – because he is still a child himself,” says Anton. Vasya’s personality may be extraordinary, Anya explains, but his life is anything but. Tending to the land is everything in rural Transnistria, where children are expected to work from an early age.

Beyond compulsory military service, or the occasional chance to study at university, there are few prospects to look forward to. Not that it gets them down.

As Anya and Anton found, there’s a certain kind of magic that happens when these friends connect. It’s what inspired the project’s name, Mahala (neighbourhood), and is something the photographers wanted to stay faithful to.

“We were lucky,” says Anya. “The responsibility of having their trust and the desire to tell a true story, without embellishment, didn’t contradict with each other. When everything was finished, we showed it to the guys and they said, ‘Yes, that’s the way it is’ – which made for a special moment.” 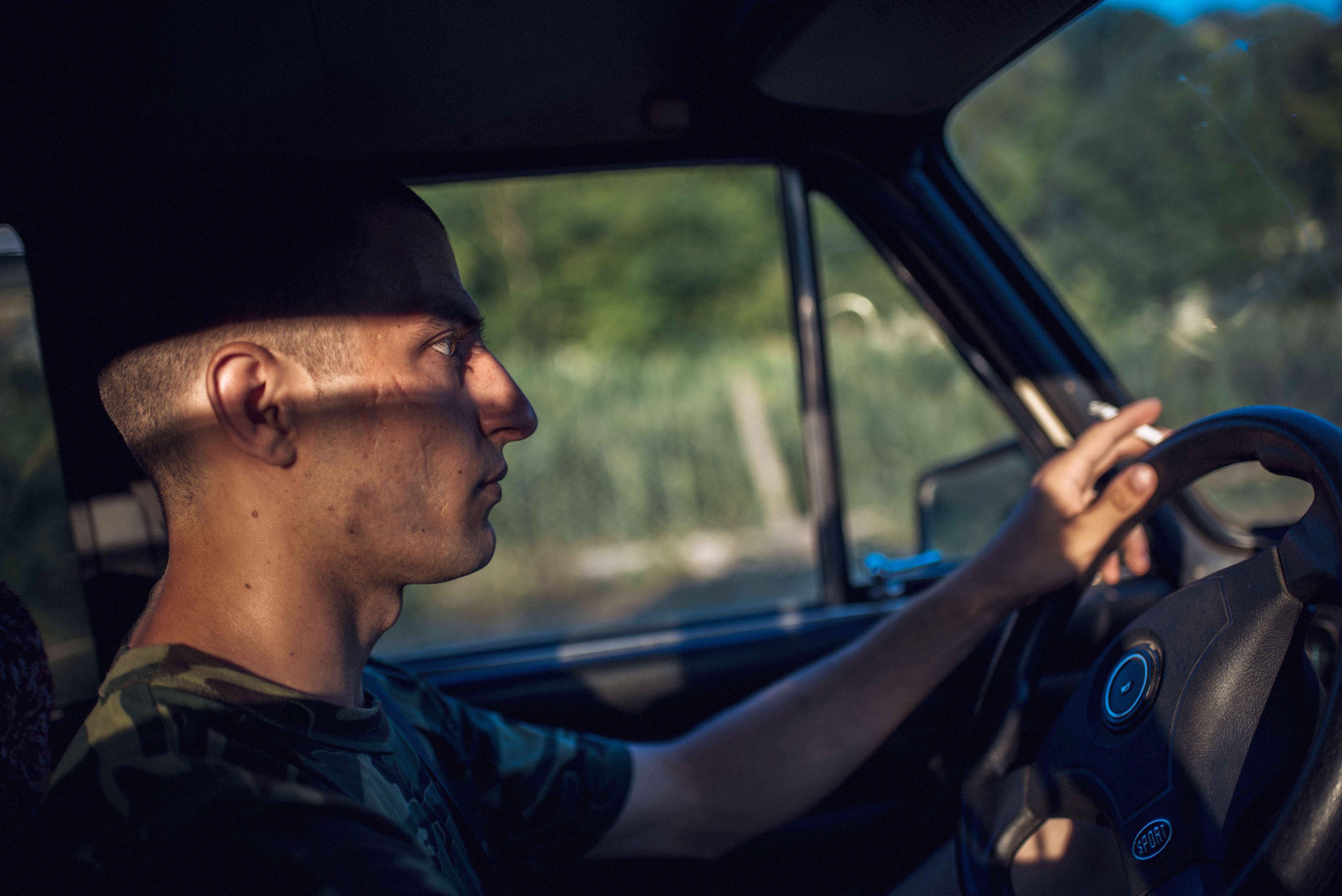 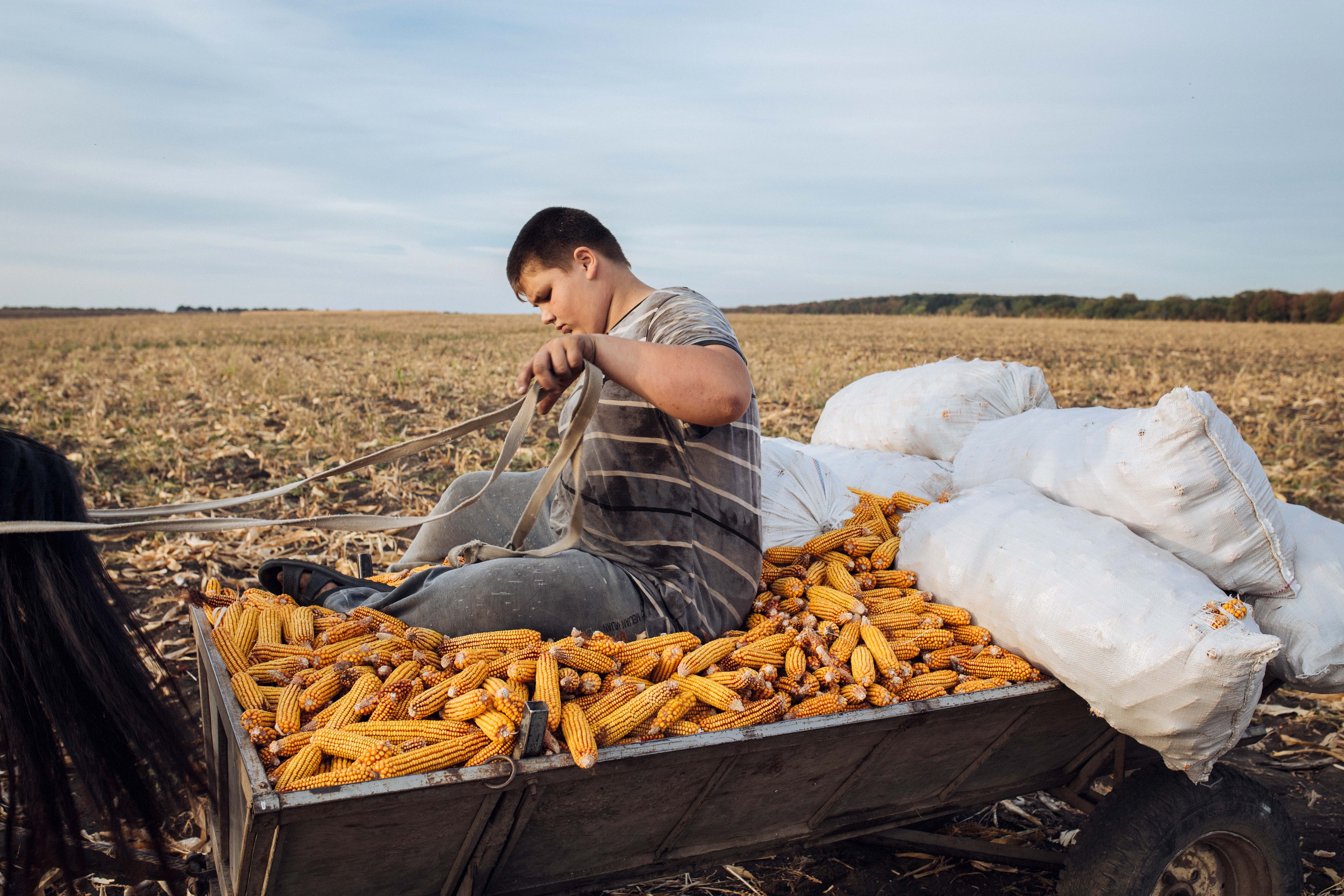 Fourteen-year-old Maxim harvests corn in the autumn sunshine. Despite his age, Maxim is expected to work on his parents’ farm every day as well as attending school in a neighbouring village. 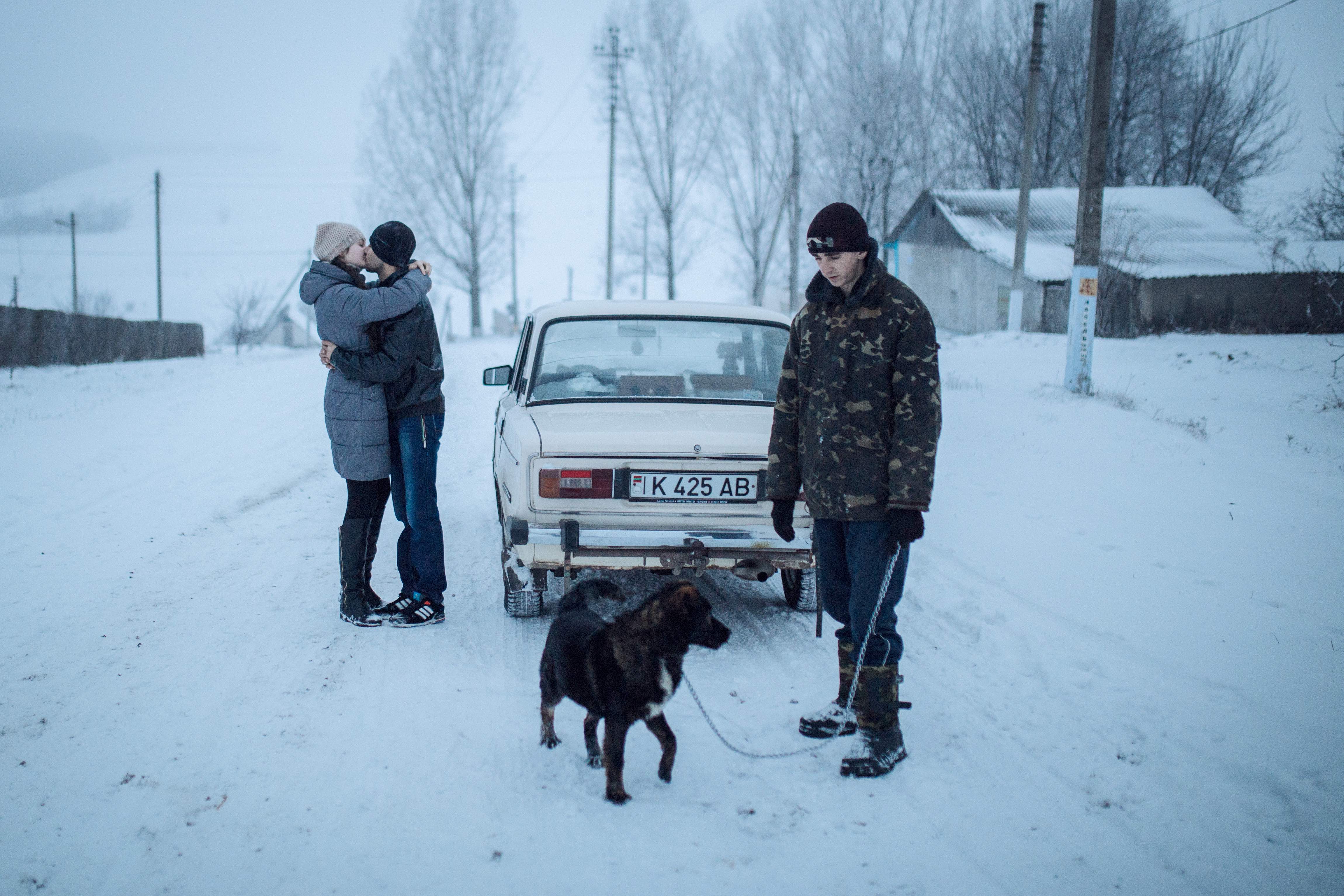 Yura embraces Tania in Rotar, where he visits her on weekends. In the countryside, boys often outnumber girls – most of whom either marry early or leave to start a new life in the city. 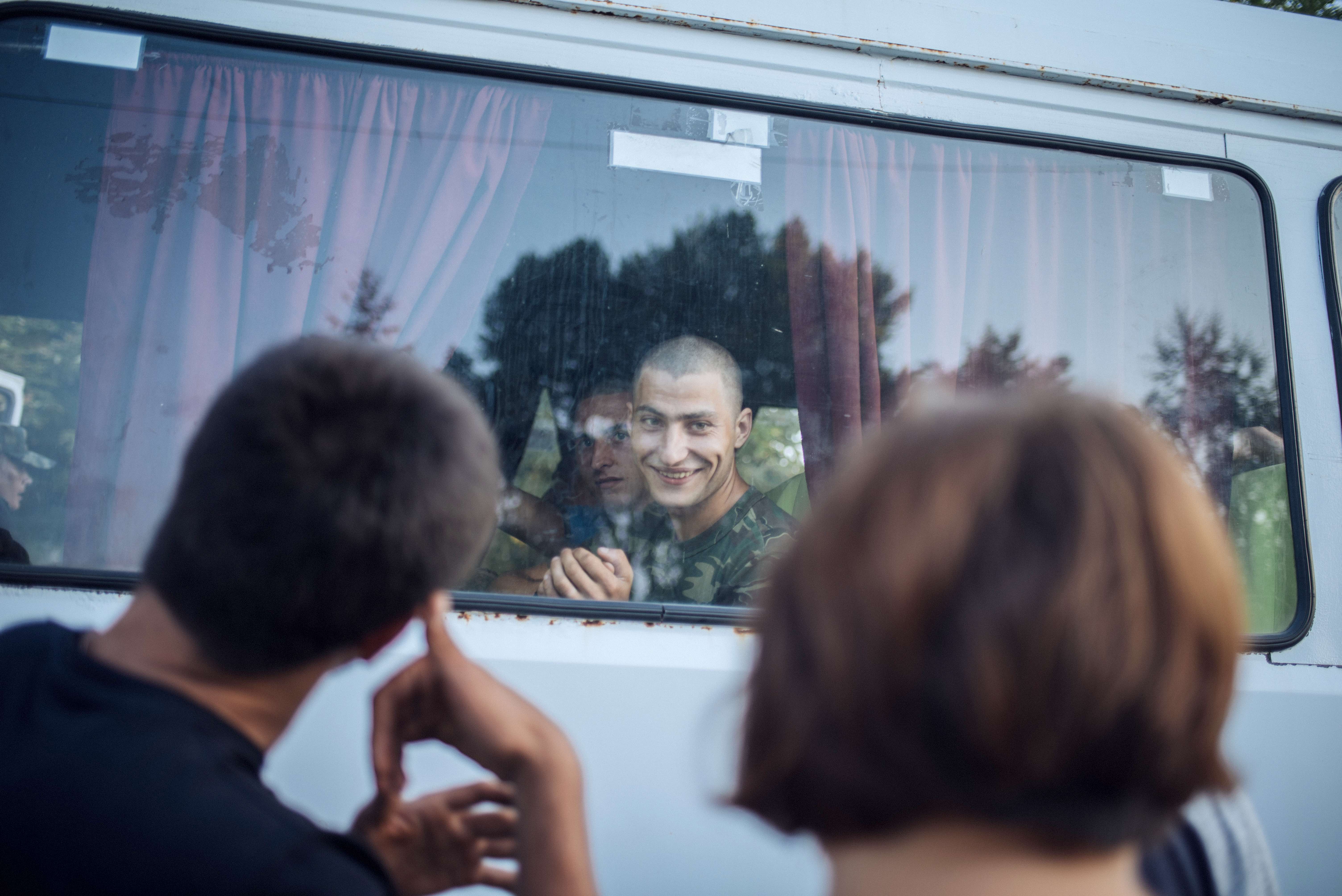 Yura says goodbye to his parents and friends as he leaves for military service. Young men consider the army an indispensable part of their life path. Attending university can postpone recruitment but if you’re healthy and under the age of 27, you have to serve. 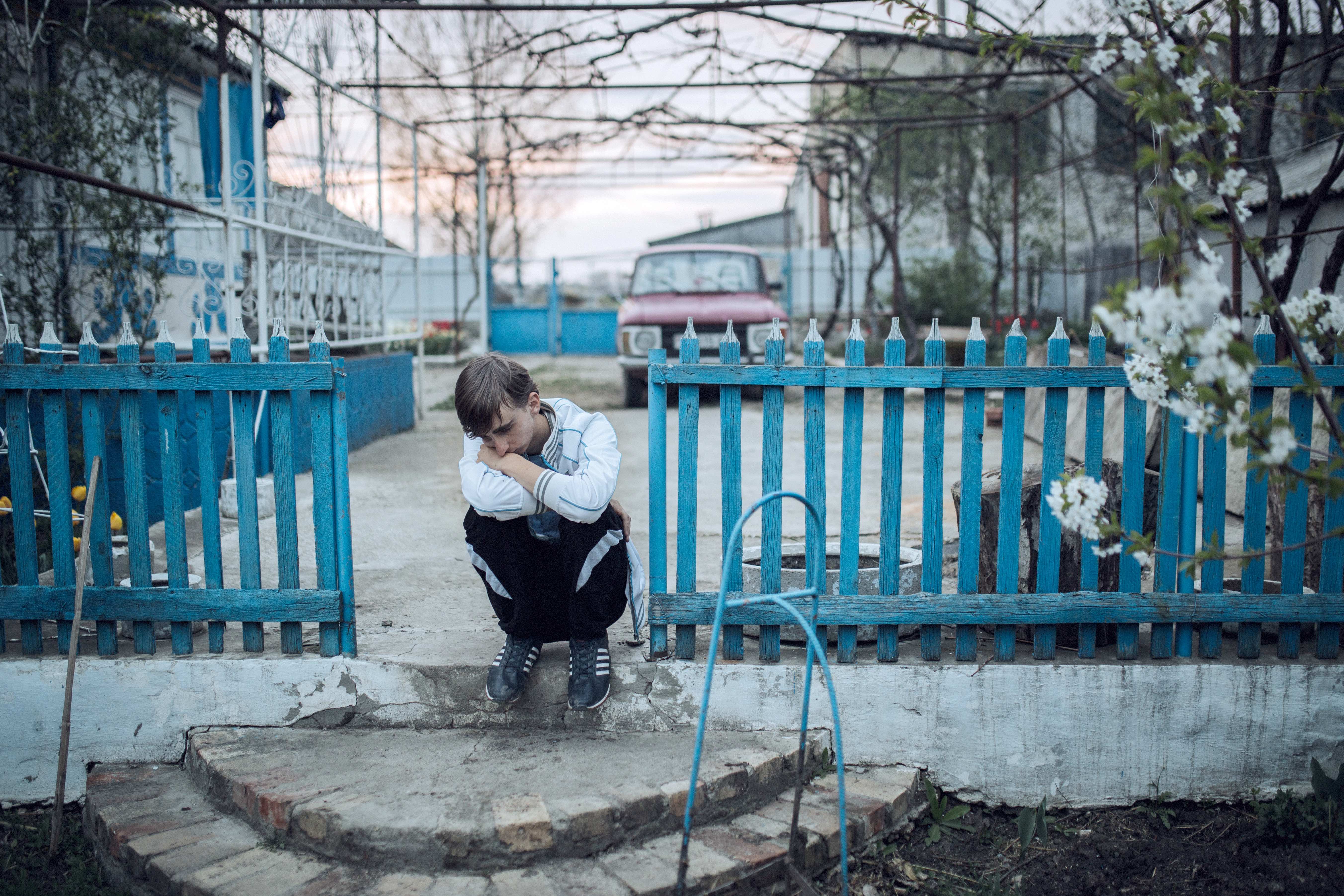 Vasya sits on the porch of his parents’ house in Rotar. Since leaving school, he has worked as a watchman for a dilapidated factory and helped his sister make pizzas at a restaurant in Kiev. Now he and his mother work full-time on the farm. Despite few other prospects, Vasya never complains about life in the village and openly admires its beautiful scenery.

Linkedin
RELATED ARTICLES
OTHER ARTICLES
SOAS Detainee Support detail the appalling conditions they witnessed at the dangerously overcrowded immigration centre in Kent.
After voting to strike across England, prison teachers explain why they’ve been pushed to a breaking point.
Photographer Ira Lapu documents the lives of ordinary Ukrainians living amid a brutal conflict.
A new photo series documents tribes preserving the environment through simple, sustainable practices in central Asia.
The campaigning charity are on a mission to increase inclusion, participation and representation of Black people in trail running.
After a devastating fire, creatives in the city are coming together to call for more affordable workspaces.