The life of a Sumo wrestler is gruelling and arduous, the tradition-steeped sport requires total dedication. Take a look inside the stable where they eat, train and sleep.

The life of a Sumo wrestler is gruelling and arduous, the tradition-steeped sport requires total dedication. When in Tokyo, photographers Pearce Leal and Woody Gooch took a look inside a stable where they live, eat, train and sleep.

The life of a Sumo wrestler is seeped in tradition and routine – they live and train religiously at their ‘heya’, or stables in English, for the duration of their careers. It’s where they eat, sleep, live and train, and changing stables is forbidden. 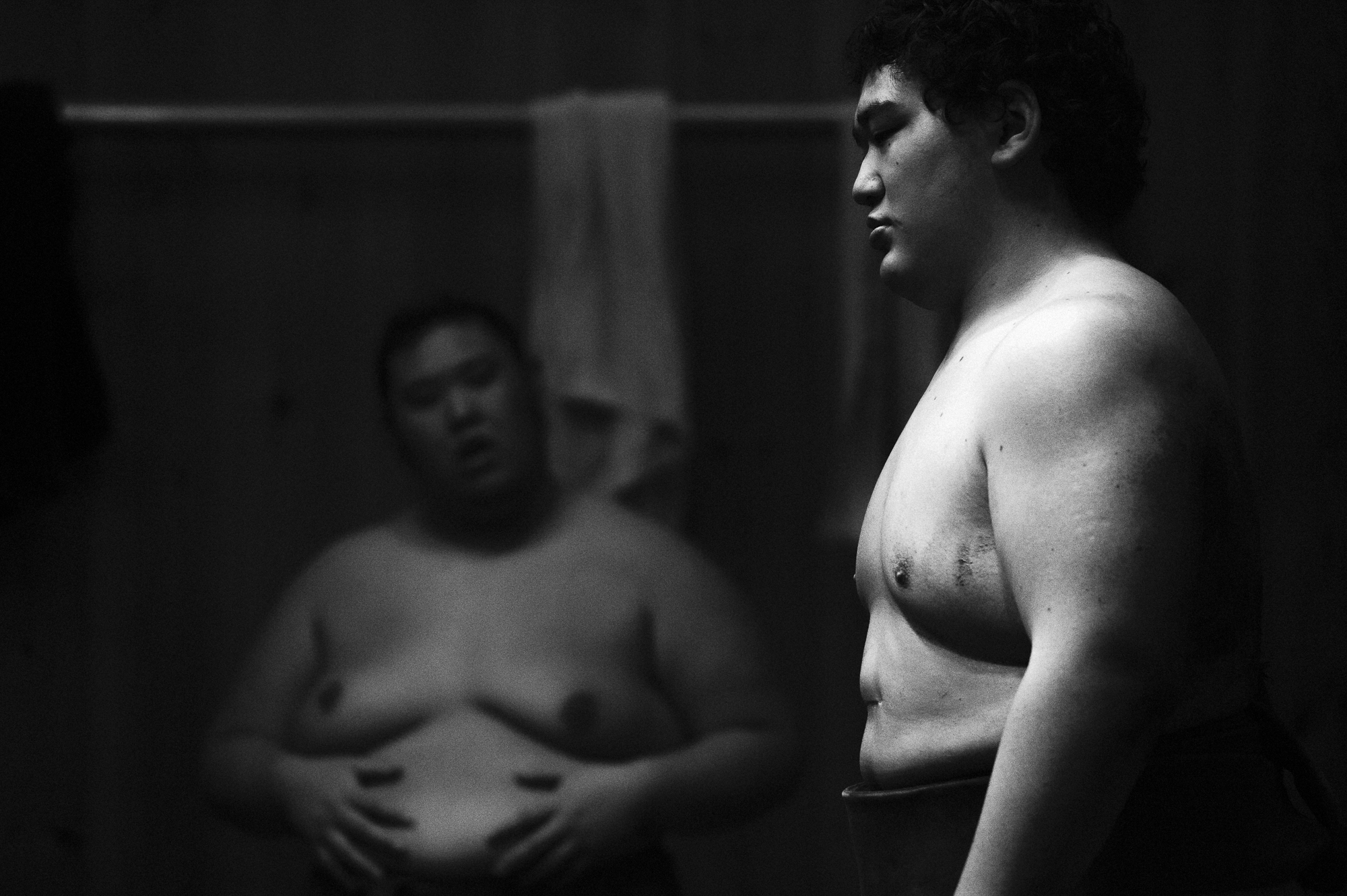 During a typical day the wrestlers wake up at 5 am and train 11 am, before having a combined breakfast-lunch, eaten ceremonially in order of rank. 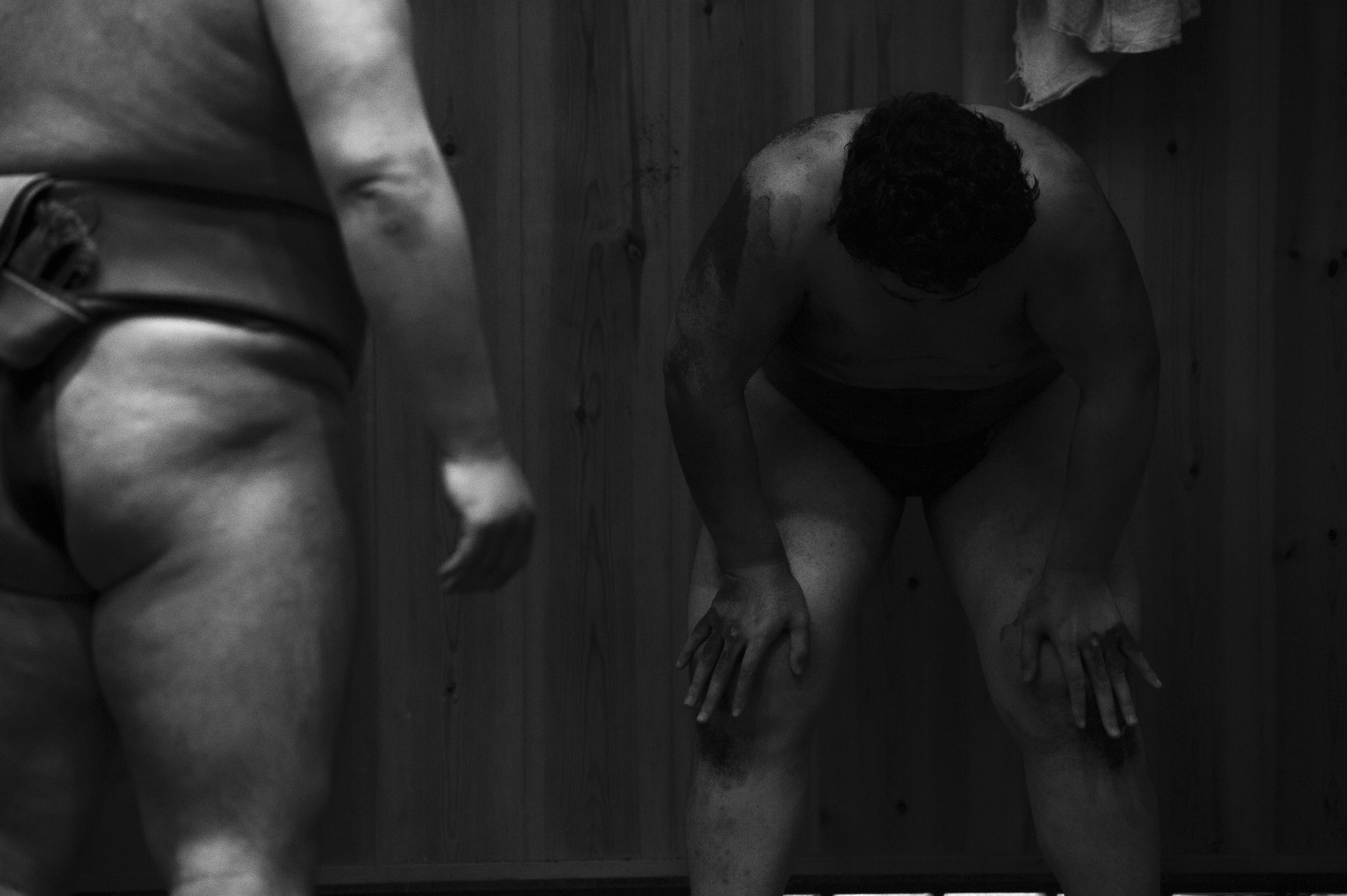 After napping for a couple hours the wrestlers do household chores, before embarking on another workout. After that they relax, watch television and read until dinner. For a few short hours the wrestlers have free time and then the lights are put out, they all sleep in the same room together. 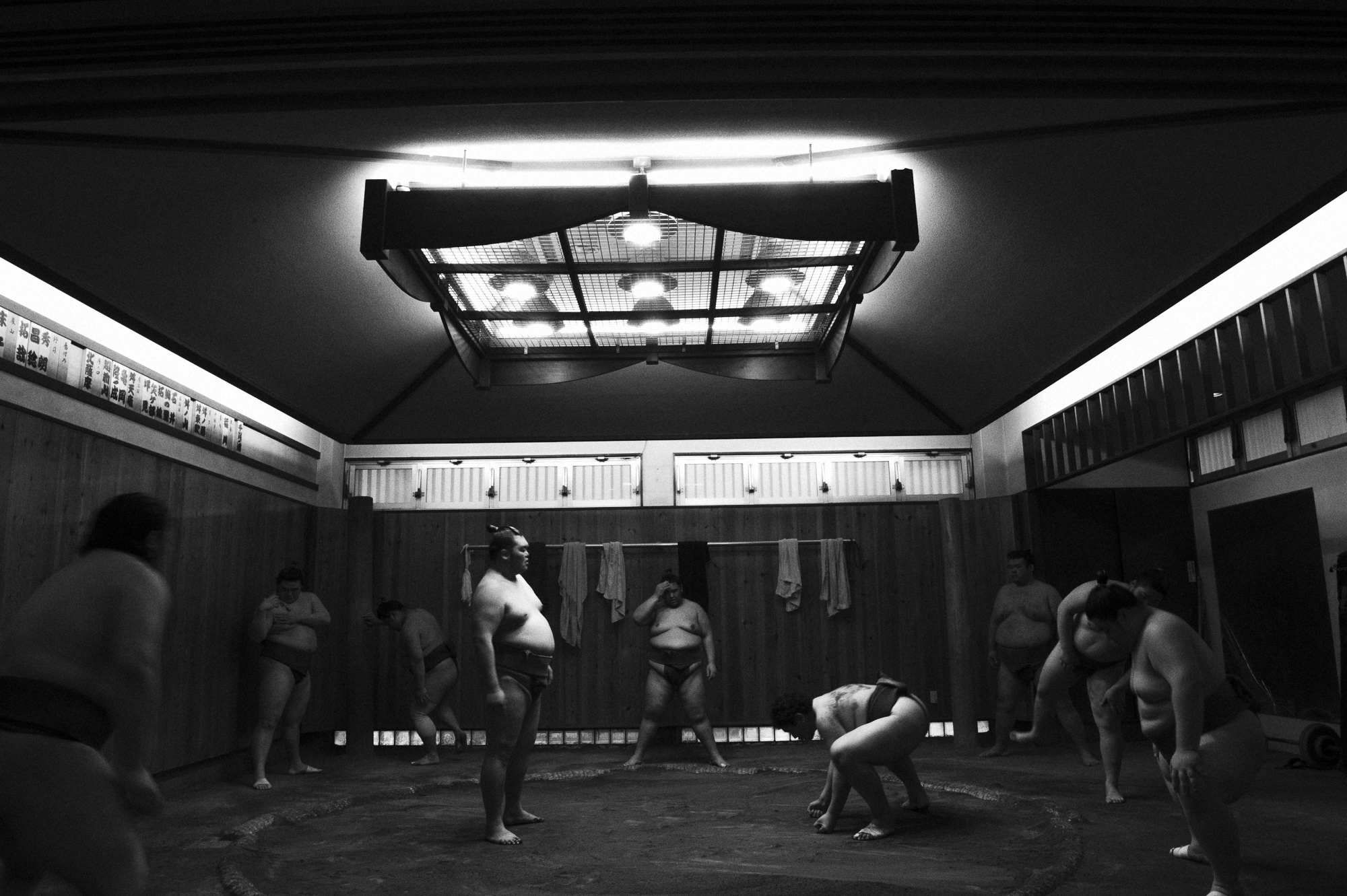 At the end of 2015 we attended a Sumo training session in Tokyo, one of 47 in the Japanese capital, turning up in the middle of the morning. 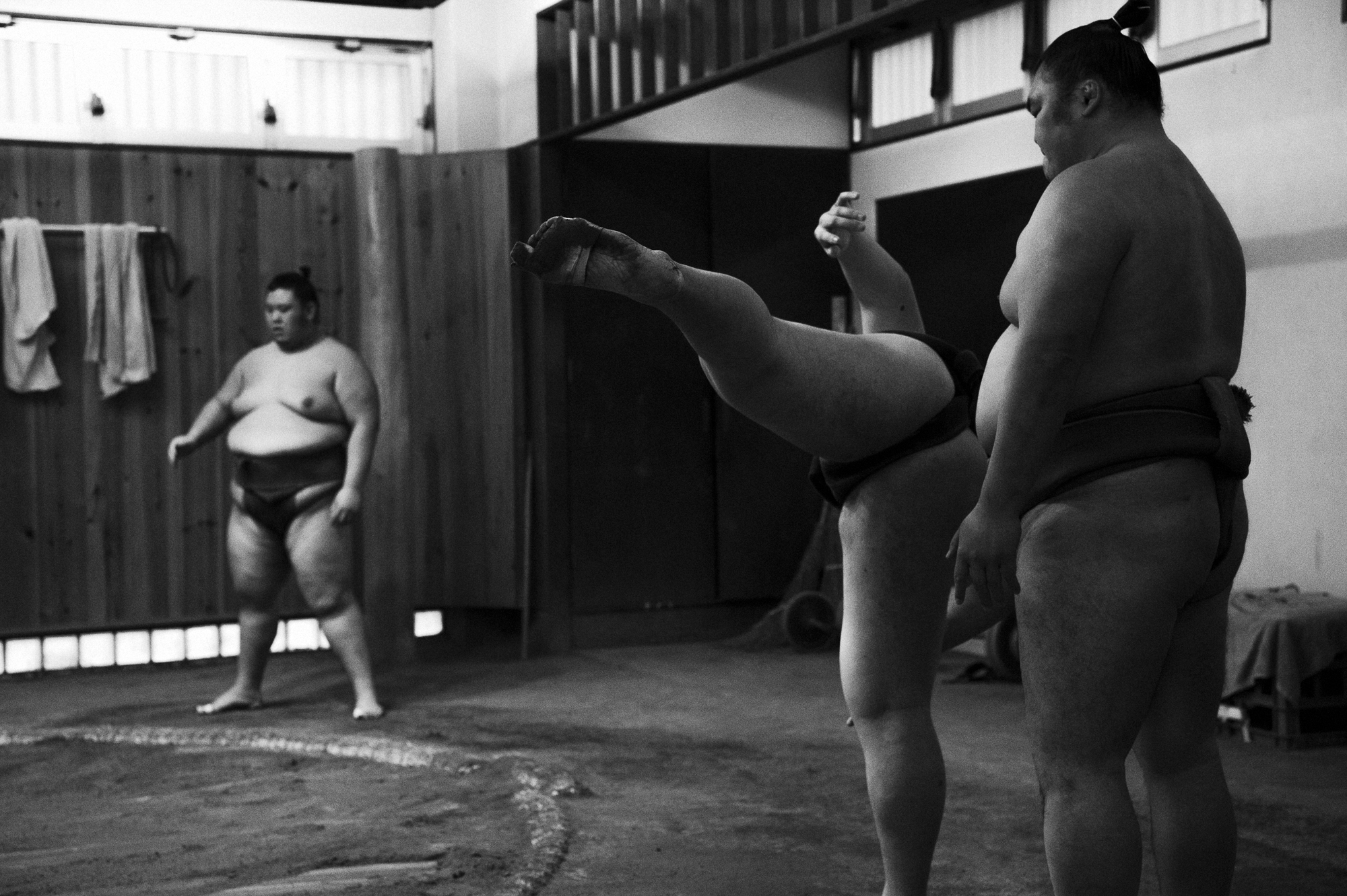 We spent just over an hour in a tightly packed sand floored room, watching the Sumos wrestle, with our shoes stowed neatly by the front door. The Sumos were quiet, talking casually amongst themselves. Every now and then we’d hear a small giggle from one of the younger wrestlers, for whom the gruelling training routine is particularly rigorous. 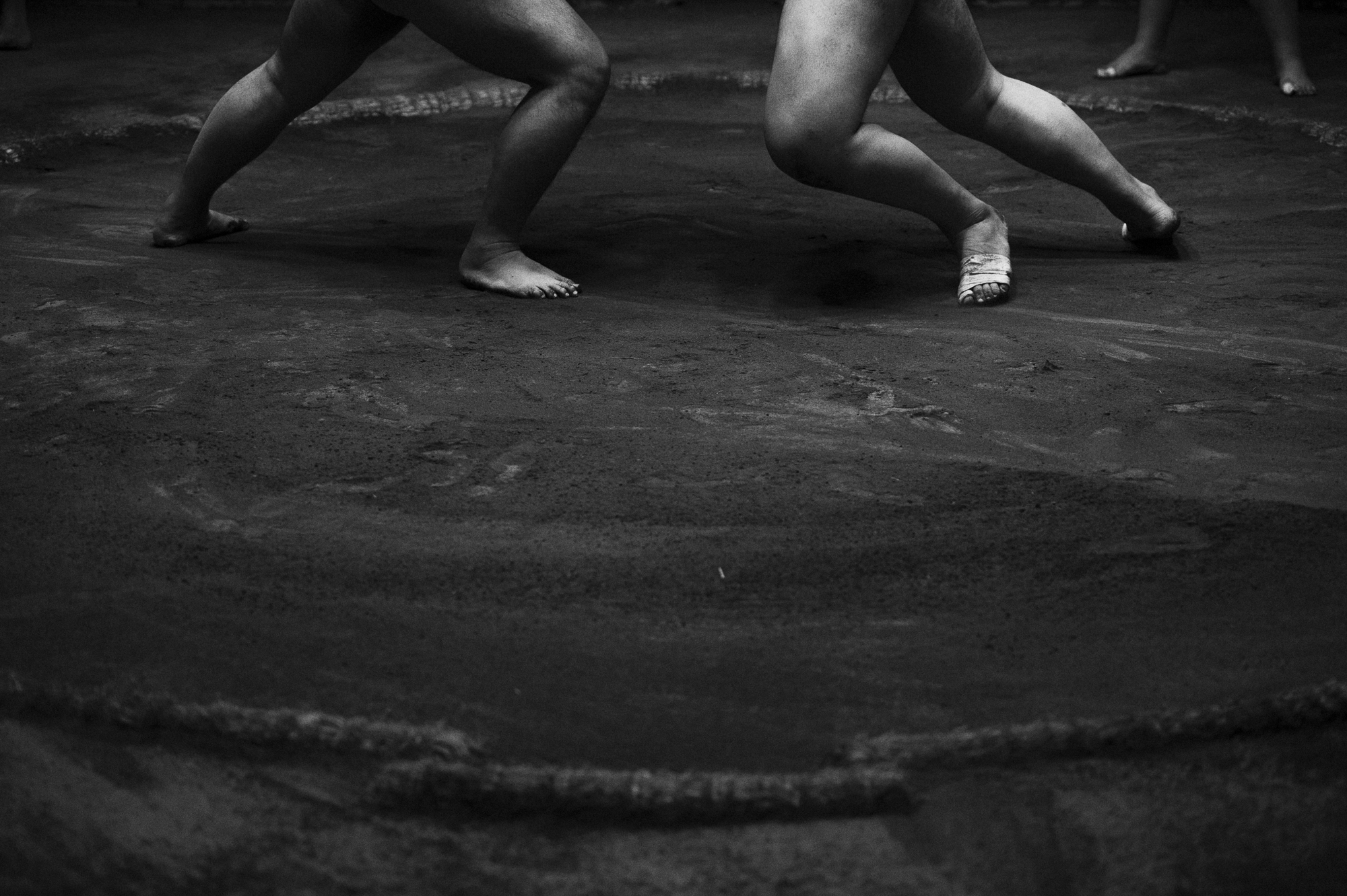 These young guys rise as early as 4am, and quickly put on their Mavashi (Sumo belt) and start to practice. They are obliged to run errands for the higher ranked wrestlers too. For even the most promising young wrestlers it can easily take five years or longer to reach the higher ranks and begin to receive a salary as a professional.

Once we sat down and got comfortable an older Sumo proudly walked his way into the ring, heads raised in the air, and everyone became quiet and serious. He grabbed a younger Sumo out of the pack and set about getting him to complete various exercises. He was focusing on attack and defence tactics, and despite the younger wrestler’s best efforts mistakes just kept on being made.

His superior’s patience was quickly wearing thin, the sloppy hand movements from his young protege were frustrating. The mentorship turned aggressive as hair was pulled, and bodies thrown onto the sandy floor, before the struggling young Sumo was pulled up onto his feet to complete the whole process again.

With bruised, bloody thighs and tears running down his face, he continued to endure the session. This would carry on for hours, day in day out, all in pursuit of success. This young fighter was just 16 years old.

Linkedin
RELATED ARTICLES
OTHER ARTICLES
With the virus now a global health emergency, we must take steps to fight misinformation and demand a swift UK-wide vaccine roll out, writes Phil Samba.
From the chip shops, to the bingo parlors and burlesque dancers, photographer Mike Coles remembers capturing scenes of holidaymakers by the English coast.
Last week, Tower Hamlets council removed its nudity-restricting licensing conditions in a huge win for London’s kink community.
The author discusses her new memoir, which offers a sobering reflection on the racism and otherness she’s experienced along with a joyful celebration of her culinary heritage.
A sharp increase in officers armed with the electrical weapon is resulting in serious injuries and deaths.
As the Criminal Bar Association enters its fifth week of action, criminal barrister Russel Fraser explains why the legal professionals have walked out and how action is likely to escalate.