Art & Culture / Photography / The Travel Diary: The Mongolian nomads wrestling with horses and the future 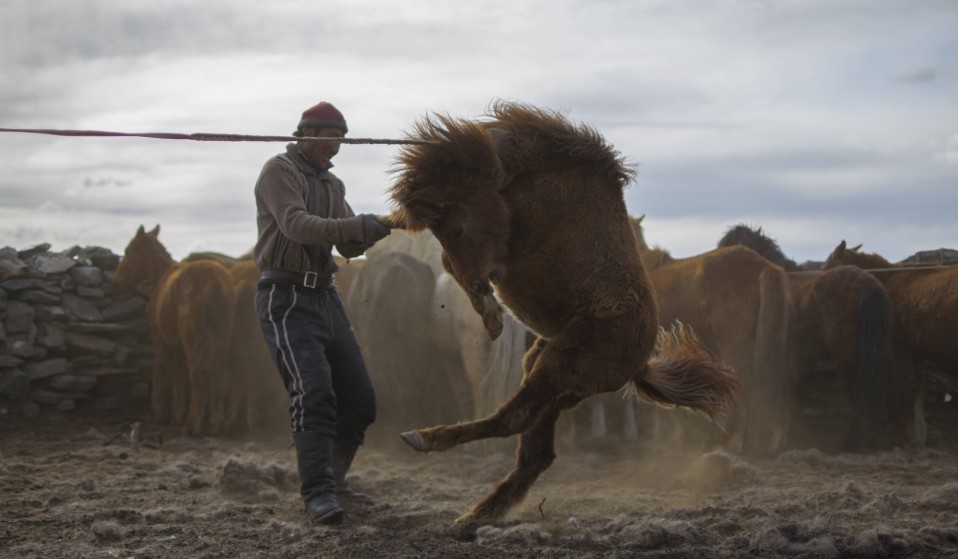 Mongolia is in the midst of mass urbanisation, putting traditional culture and rituals under threat. Photographer Dimitri Staszewski is based in the country, and was invited to capture an old farming practice still going strong.

I really do love my job. That’s what I think to myself, as I’m travelling through the breathtaking Mongolian countryside. Right now I’m capturing performances of traditional music in the daily lives of nomadic herders. While my research focuses on recording sound, it’s building human relationships with the performers that I enjoy most, spending days or sometimes weeks in their company.

One sentiment that countless herders continually repeat to me is that rapid urbanisation and access to new forms of media are changing traditional Mongolian culture. Fewer Mongolians remain nomadic as young people move to provincial centres or to Ulaanbaatar, Mongolia’s capital. Half of the country’s small three-million-person population already lives in UB while  a shrinking third has remained nomadic. 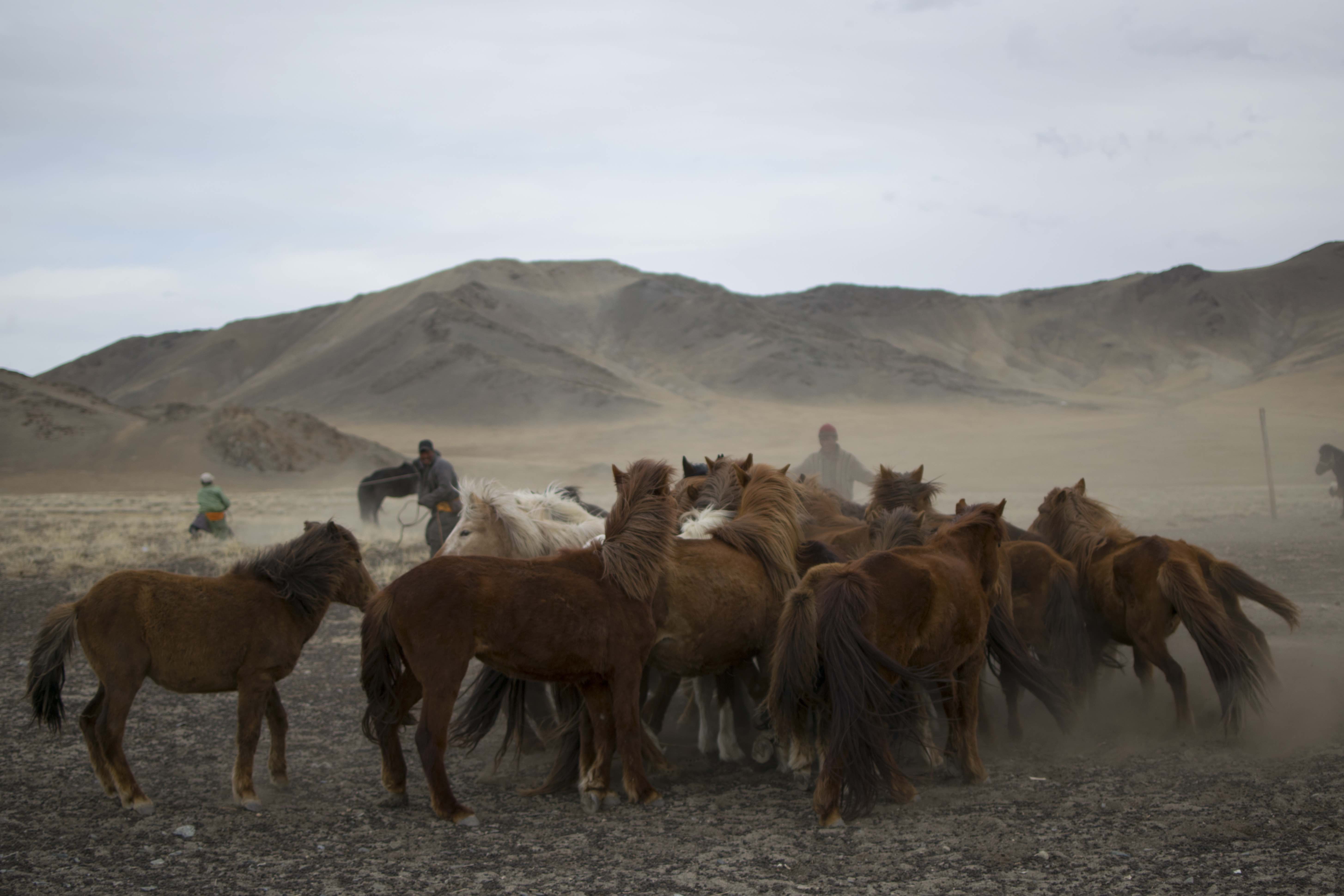 Urbanisation does create cultural shifts, but I have to stop myself making sweeping claims regarding its affects on traditional culture. The very label of “traditional culture” often places something that exists today in the past. This creates artificial distance between cultures that are already physically distant. 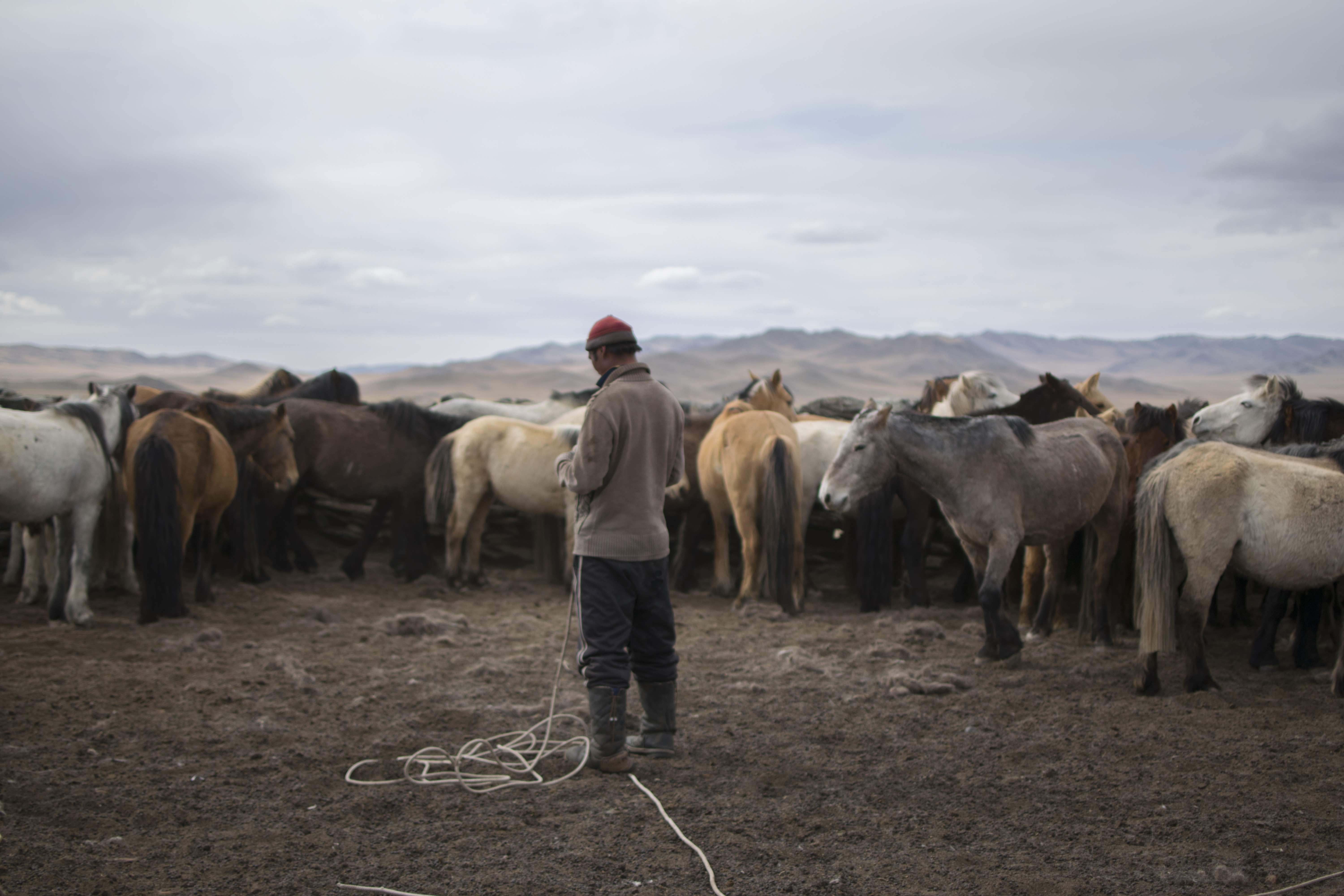 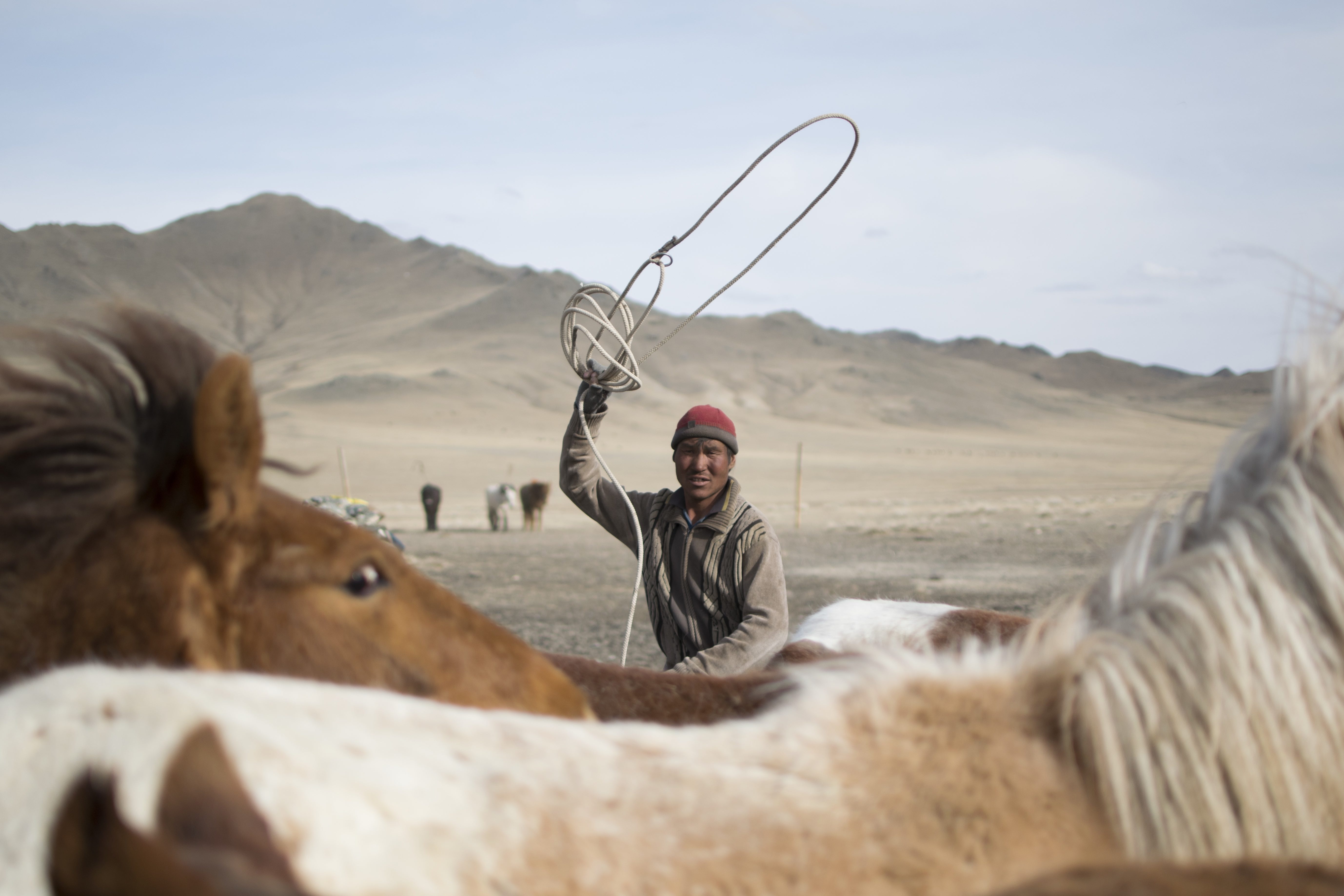 It’s thoughts like this that cross my mind as I arrive in the Bayankhongor province in central Mongolia, where I’m about to watch and photograph a group of herders catch and cut the hair of two small herds of horses—around fifty in total.

As four herders corral, rope, and cut the hair of their two herds, the city couldn’t feel further away. While nomadic culture is certainly changing in Mongolia, the effects of urbanisation are unfelt in this moment. I step into the fray to try and capture something that only happens in the Mongolian countryside. This isn’t some ancient tradition – it’s a yearly ritual that is still very much a part of today’s nomadic life. 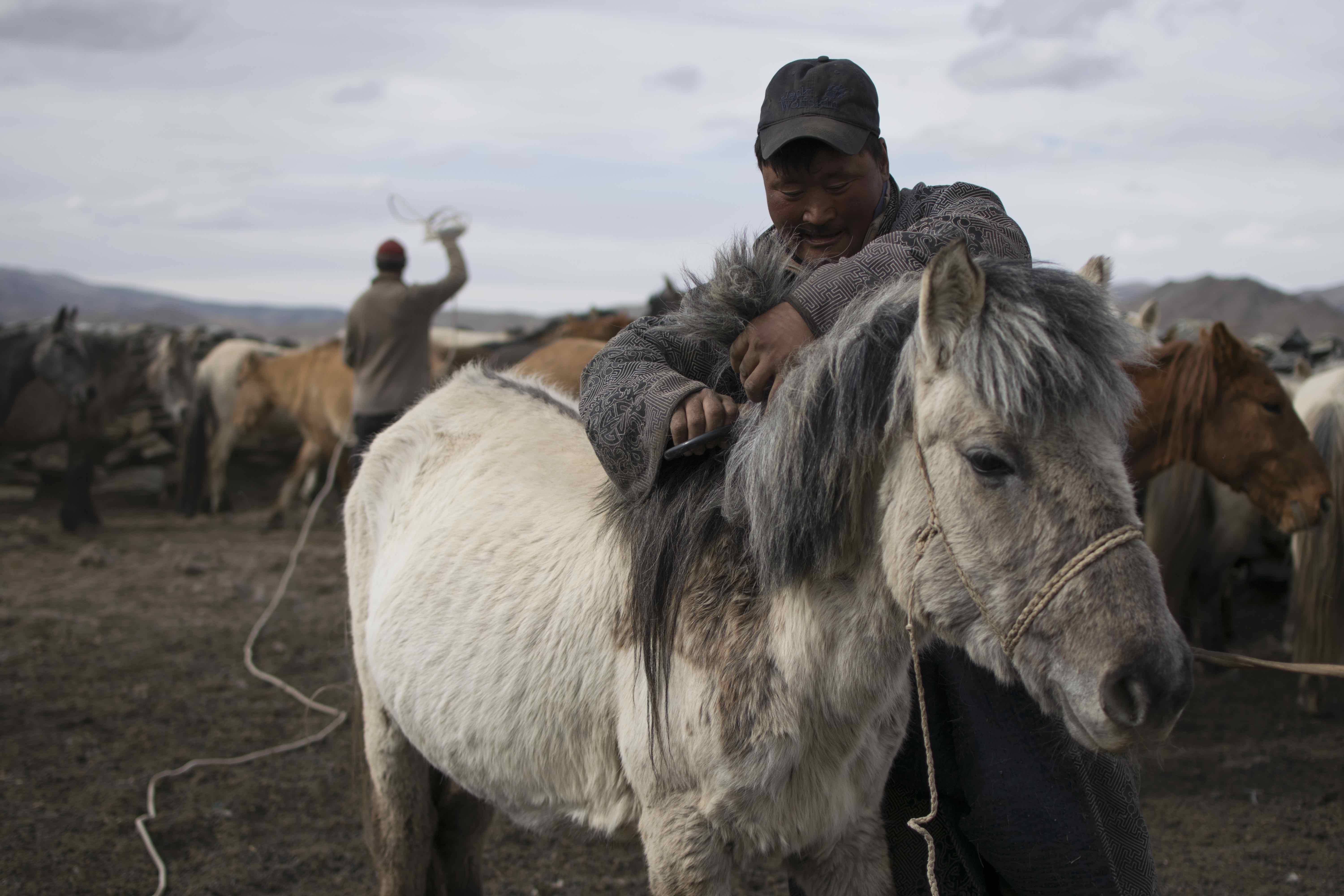 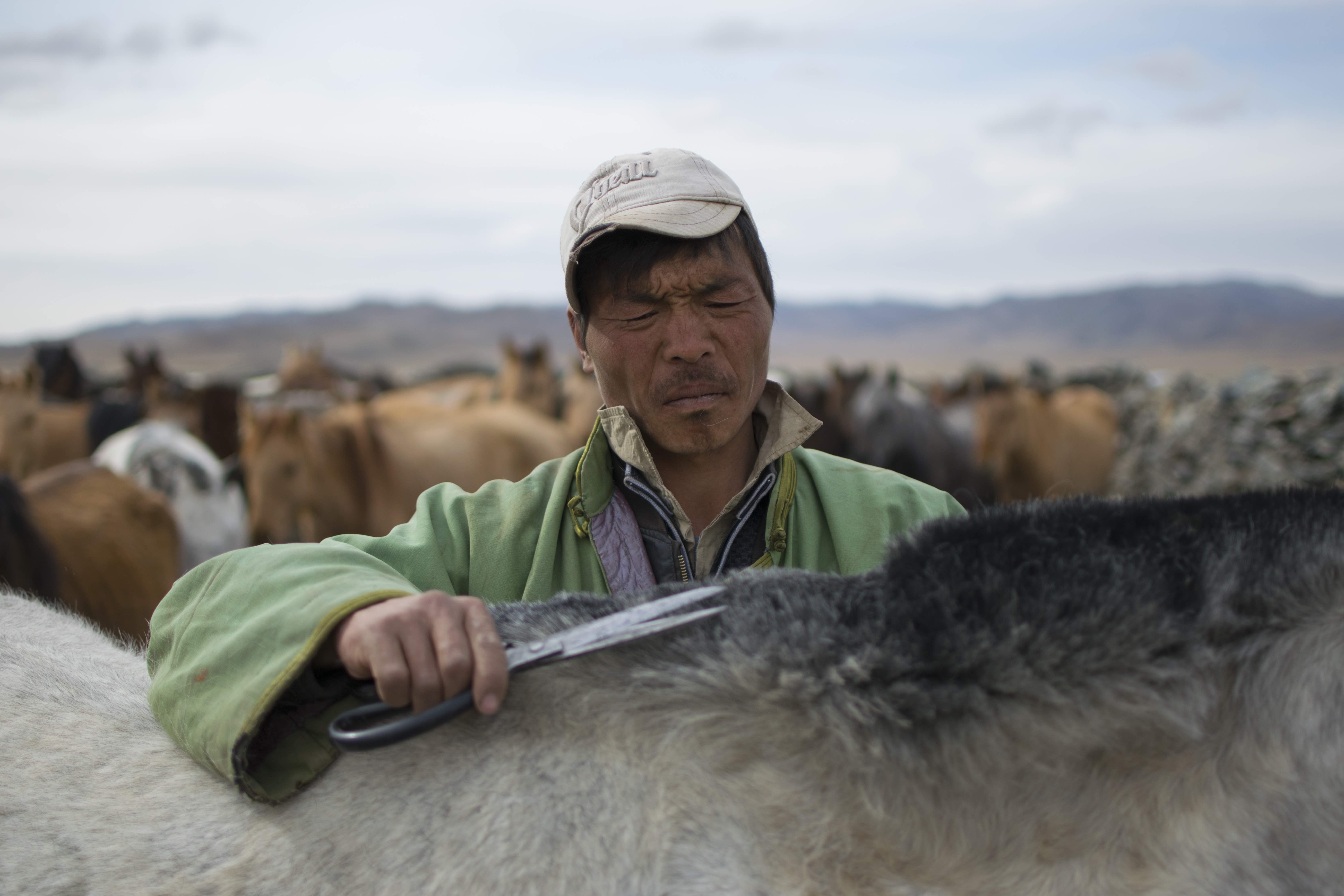 “Gadaa aduu dellej baina”—“They’re cutting the horses’ hair outside.” Filling in the gaps with her hands-turned-scissors mimicry, I surprise myself with my ability to understand the words of my host-mother Enkhchimeg.

I grab my camera and step out into the furious bluster that characterises Mongolian spring. Herders and horses kick dust and dirt, which caught by the wind is thrown into eyes, ears, and mouths. 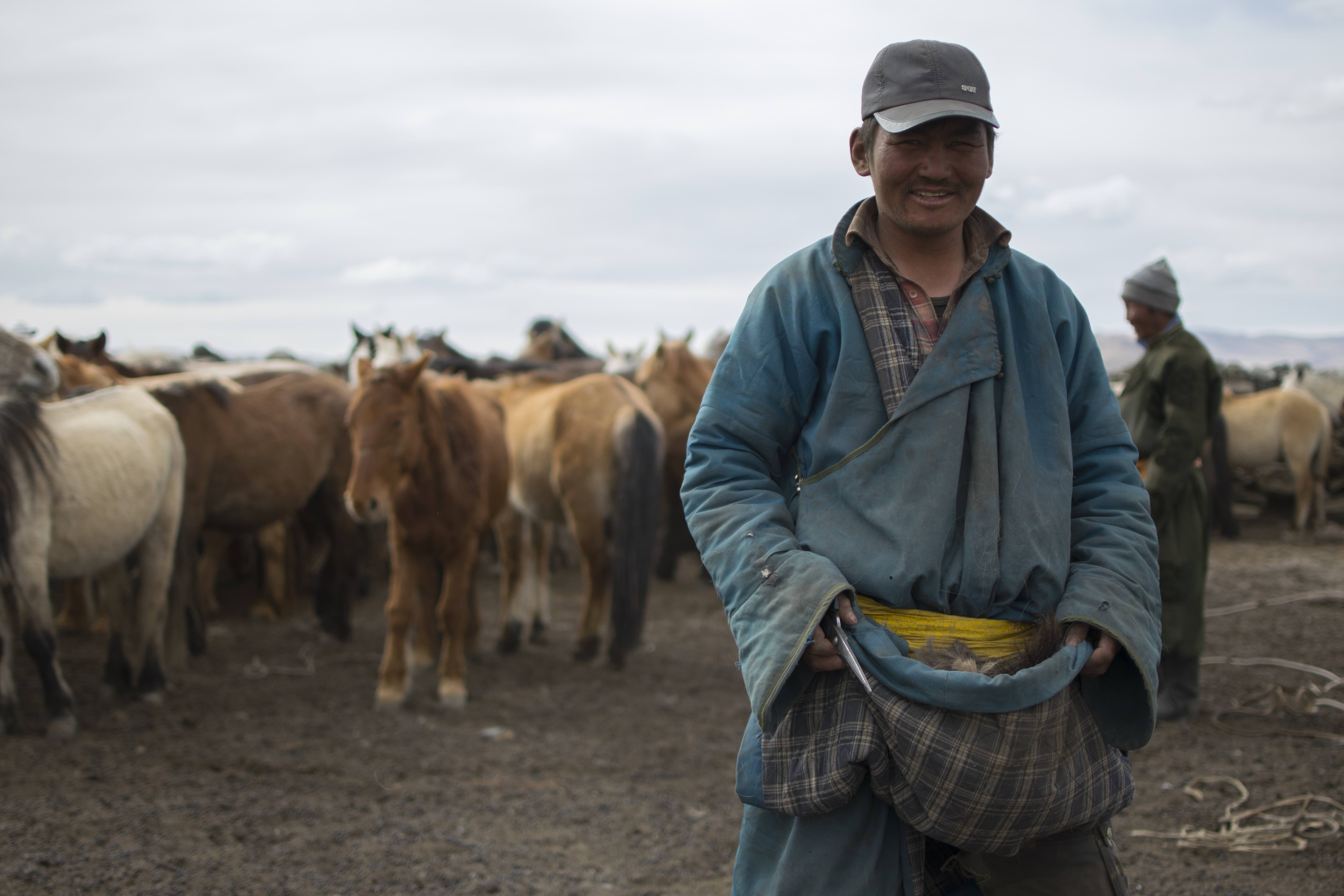 Mongolian horses have been aptly described to me as “half-wild.” Despite their undersized stature compared to their Western counterparts, lifetimes of grazing, running, and playing with the herd have left their spirits uninhibited and whole. They’re gruff and abrasive in both texture and personality.

Roaming freely in the mountains nearby, the swirling herd are coaxed into my host family’s corral to make the process of hair cutting easier.

Otgo (grey), Bondon (blue), Togoo (green), and Ganbold (lasso) were systematic. Ganbold, someone Enkhchimeg lauds as being an exceptional horseman, leads the group – most throws of his lasso find their mark on the first try. Togoo jumps between roping and cutting as needed. Otgo and Bondon focus on cutting and helping rein in the spirited horses. 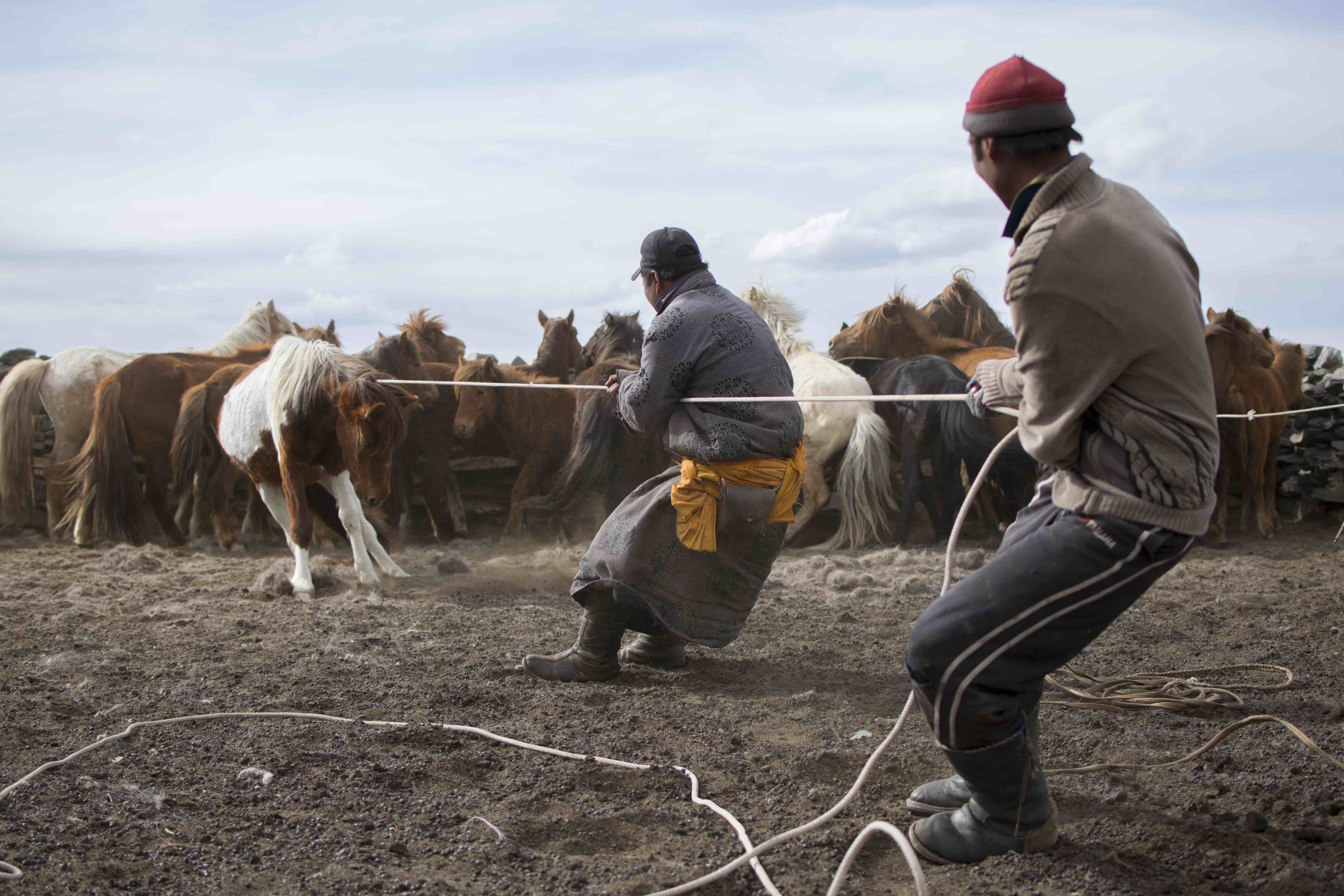 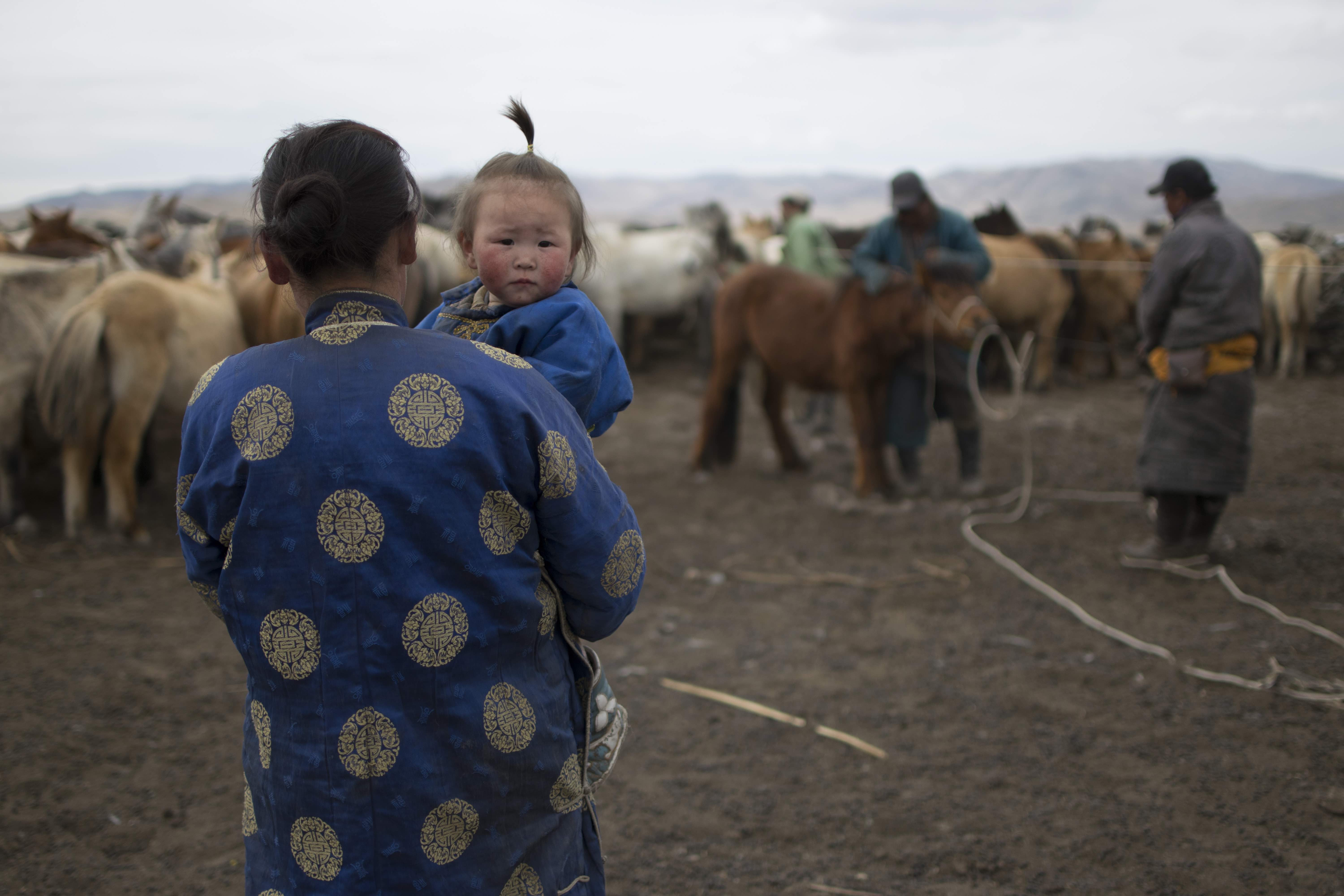 With some of the young horses, Ganbold decides to forgo his lasso, using only his hands to grapple with the animals. Grabbing a front leg, he forces the horse to lose its balance, before wrestling it to the ground. Those around us laugh as I give him the nickname Aduunii Bukh—The Horse Wrestler.

Once controlled, the young horses have three of their legs tied. I watch on as Bondon cocks a young horse’s head back, inserting a screwdriver into its mouth, removing a small tooth from the horse’s mouth. 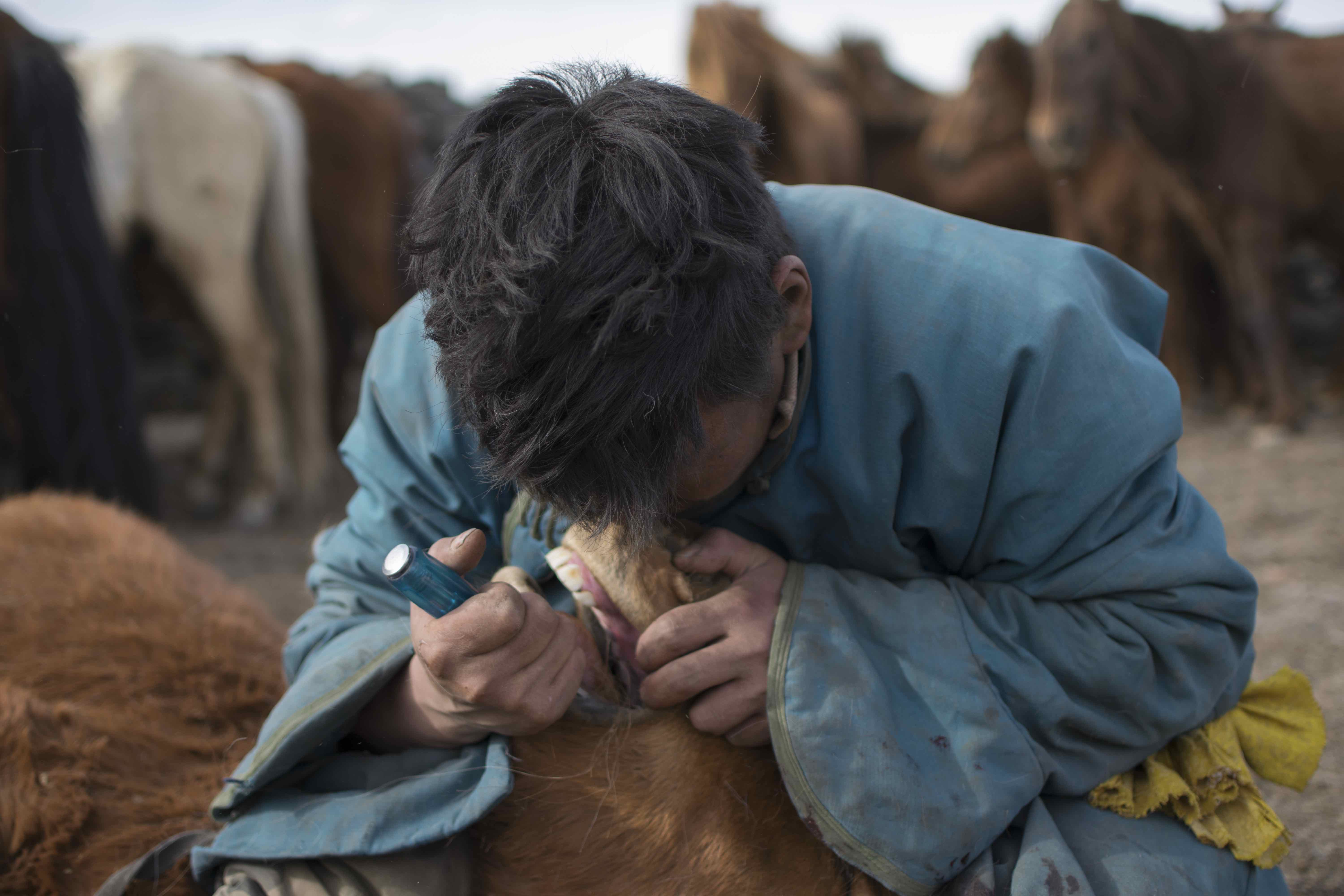 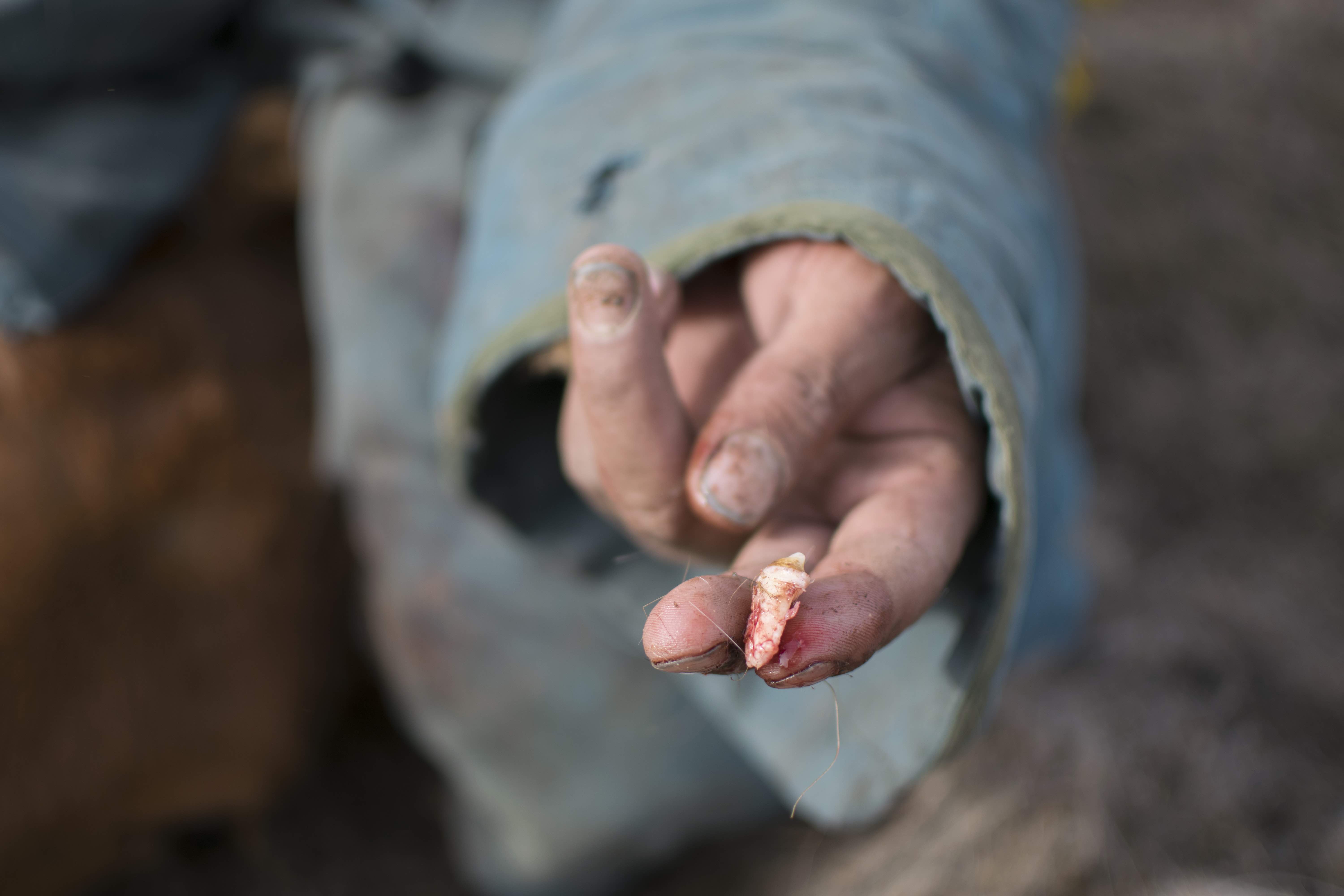 Later on it’s explained to me that this all happens because baby teeth prevent young horses from putting on weight.

There’s no letting up in the labour, and in between roping, wrestling, and hair cutting, the herders take short breaks to prepare hand-rolled cigarettes and pour themselves milk tea. 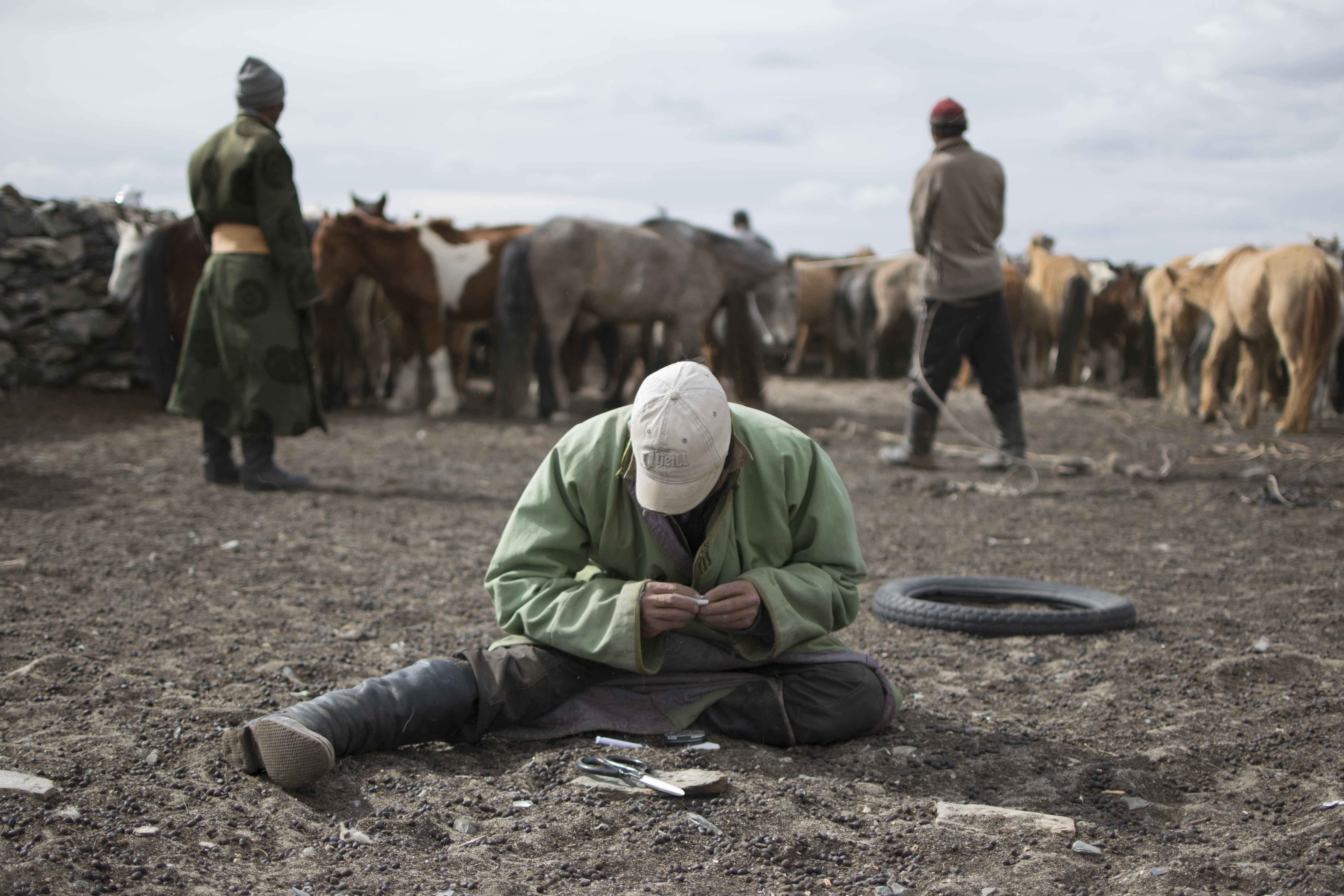 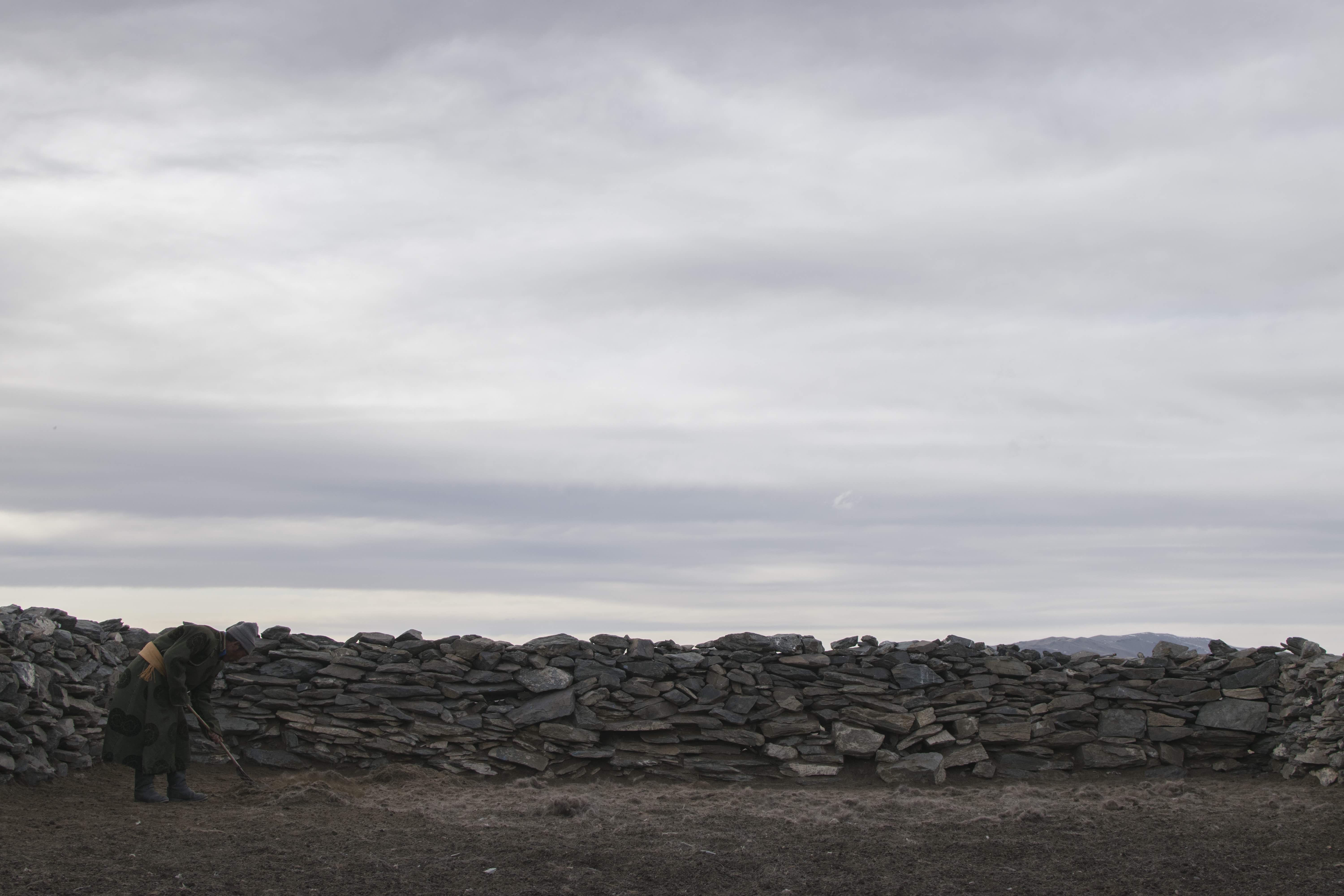 After hours, two small sacks of horsehair lie on the far edge of the corral. Togoo estimates ten kilos worth – it’ll sell for around 5,000 Tugrik per kilo, so this annual ritual brings in around $25 USD.

Heading back to host-family’s white felt ger for noodles and milk tea, I can’t help but talk endlessly about how impressive I find what I’ve just seen. “It’s not difficult, there’s a corral”, my host-mother replies, “if there wasn’t a corral it would be difficult.”

Find out more about Dimitri’s work.

Linkedin
RELATED ARTICLES
OTHER ARTICLES
From the early originators to the female writers at the forefront of today’s scene, we talk to the artists redefining graffiti’s consciously macho origins.
Following the release of his latest album, the rapper talks about finding a new approach to songwriting, attitudes to poverty, and why his music is more than a political statement.
We introduce our series spotlighting the voices of people who’ve been impacted by anti-abortion laws and anti-choice protestors.
With the UK now set to run out of vaccines, people working in the sex industry – particularly outside of major cities – have been left especially vulnerable, reports Brit Dawson.
A series of photos by the late Jerry Dantzic taken in 1957 show a tender side to the iconic Jazz musician.
After rewriting the indie rulebook with her devastating songs about romantic longing, the singer-songwriter is now imagining a future in which the artist is no longer a product.