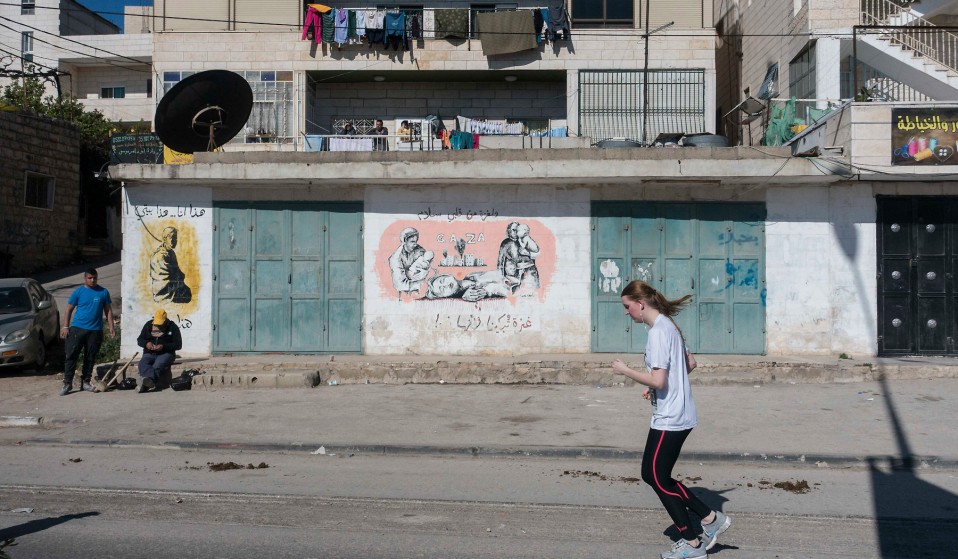 The Palestine Marathon is about more than the freedom to run.

In a country where the right to movement is so restricted for Palestinians, the Palestine Marathon is about more than the freedom to run. Photographer and participant Sam Mellish documented what she saw along the way.

We flew into Tel Aviv, and spent a few days aimlessly wandering the Old City of Jerusalem, jogging faint memories of high school classes as we marvelled at the ancient holy sites. Checking into a guesthouse and hunting out a place to grab a beer was as stressful as it got. However, for many Palestinian people, including those living under occupation in Jerusalem itself, the ability to exercise the right to movement is a daily struggle. 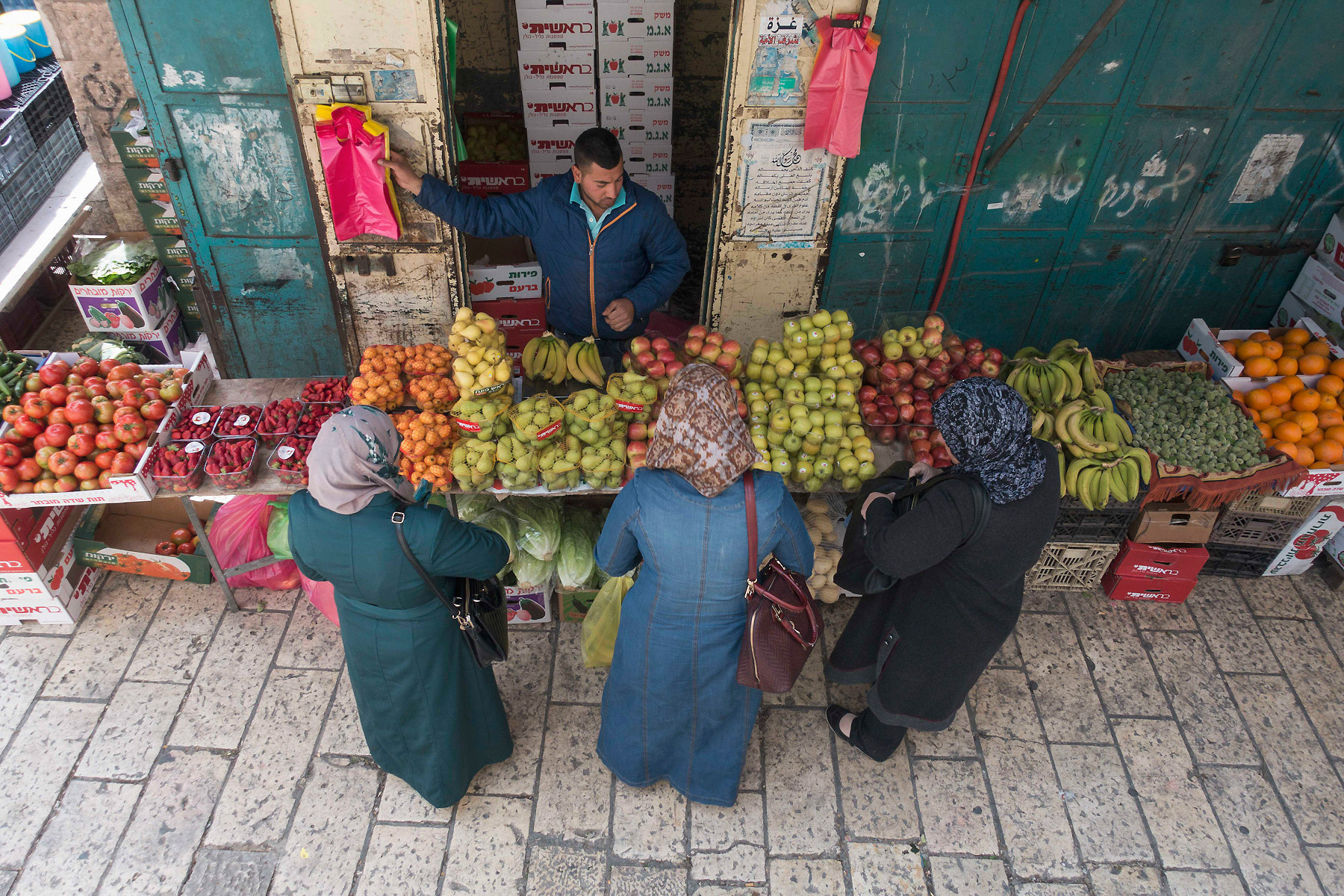 The running group Right to Movement was established back in 2013. Named after the basic human right as stipulated under Article 13 in the Universal Declaration of Human Rights, Right to Movement highlight the restriction on movement for people within the Palestinian territories. With the help of the Palestine Olympic Committee, they founded the first Palestine Marathon in April that same year in Bethlehem. 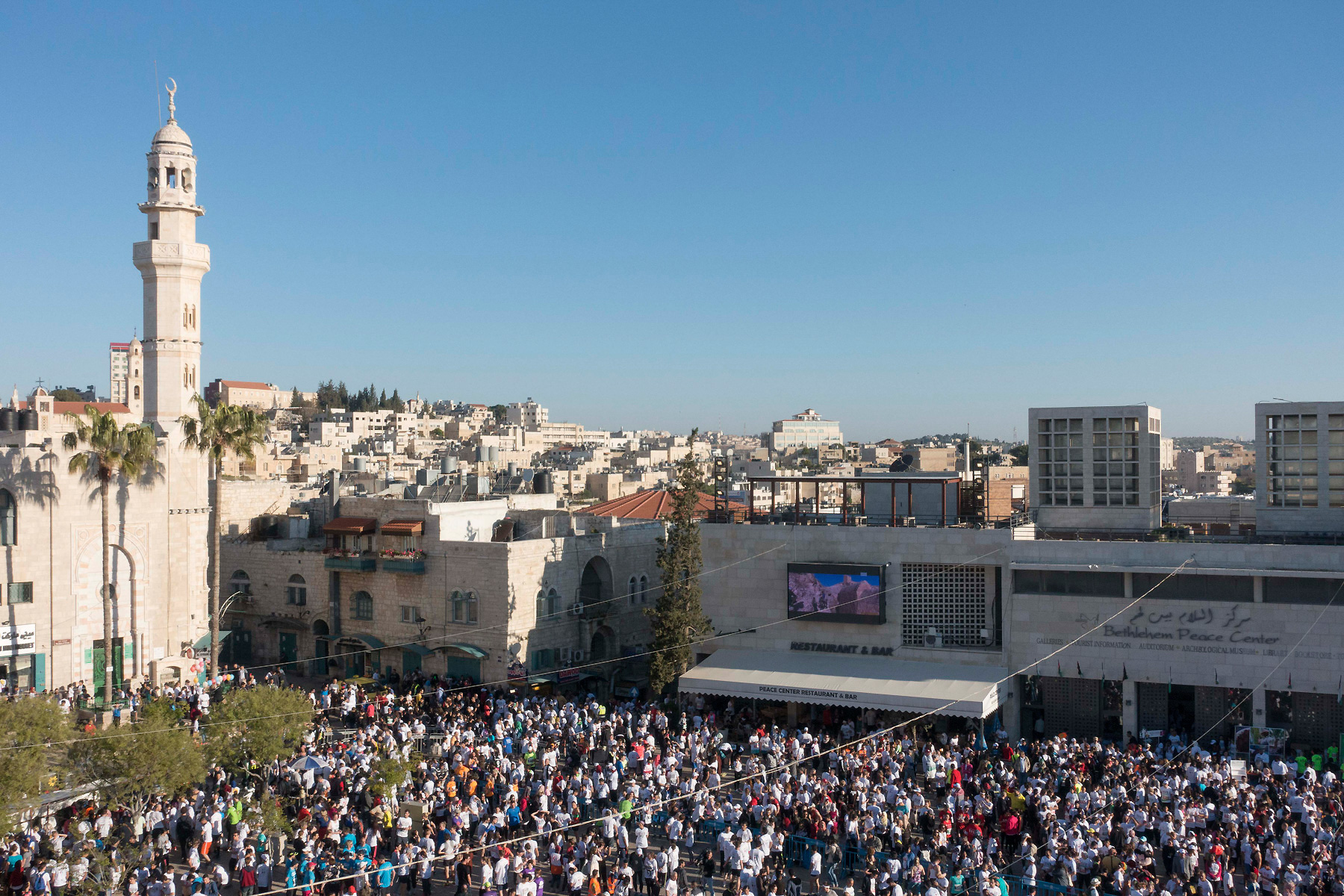 The Palestine Marathon is not a fundraising event, it’s not about nabbing a personal best, but showing solidarity with those who don’t have the luxury of free movement. This year, an incredible 4,300 people took part in either the 10k, half or full marathon – coming from all corners of the globe. Somewhat tellingly the hundred or more Gazan athletes who had registered were refused travel permits by the Israeli authorities. 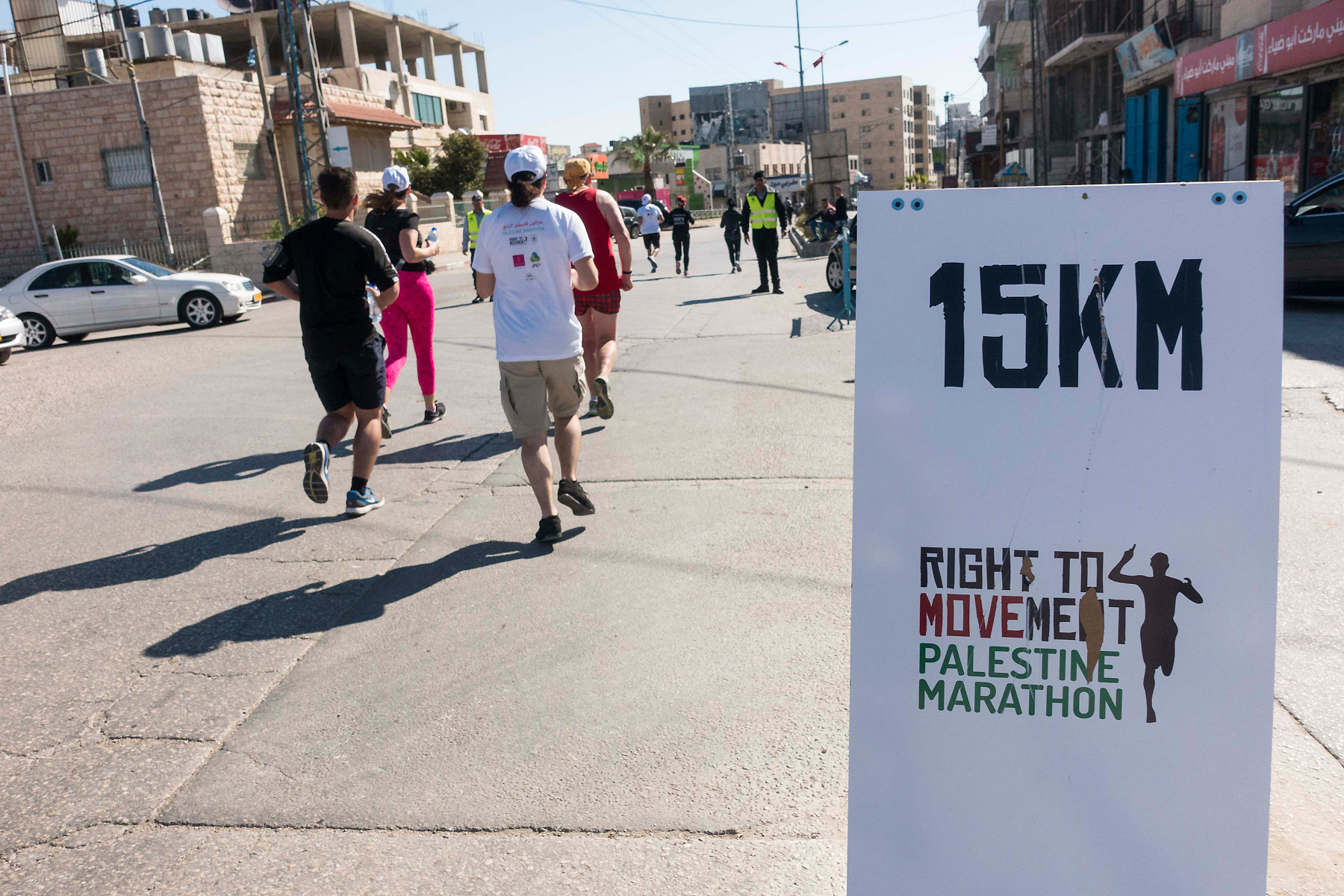 The field comprised an impressive 45% women (only 34% of London Marathon finishers are women), wheelchair users, children, OAPs, parents pushing buggies and the odd cyclist too. At one point I even clocked a participant jogging along with two bags of groceries, while sheep and donkeys got in the way too. 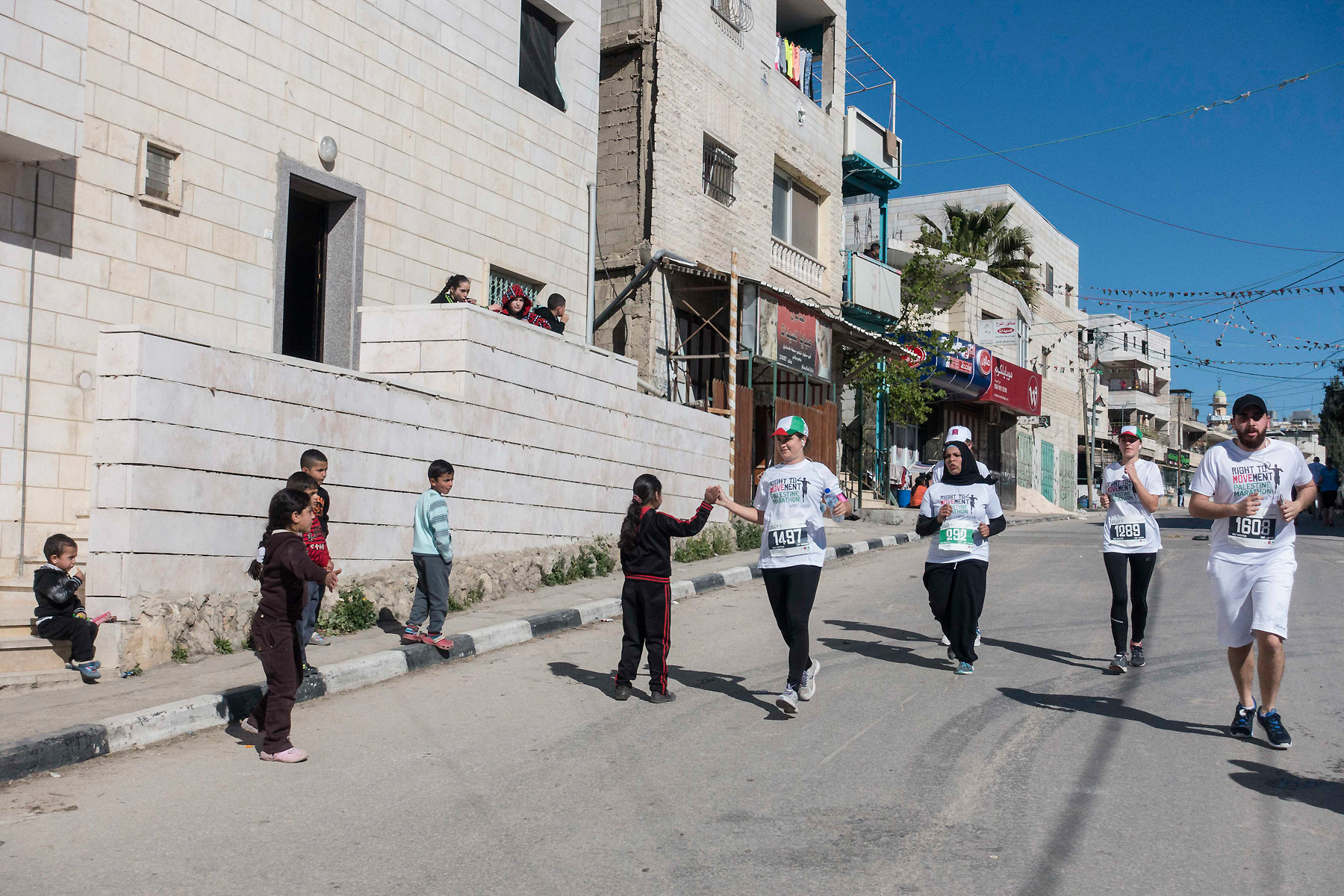 The Palestine Marathon begins with a warm up in Manger Square, the start line is adjacent to the historic Church of the Nativity. For me, it began by gaining access to the roof of the Municipalities building to photograph the huge but friendly and relaxed crowd before setting off. 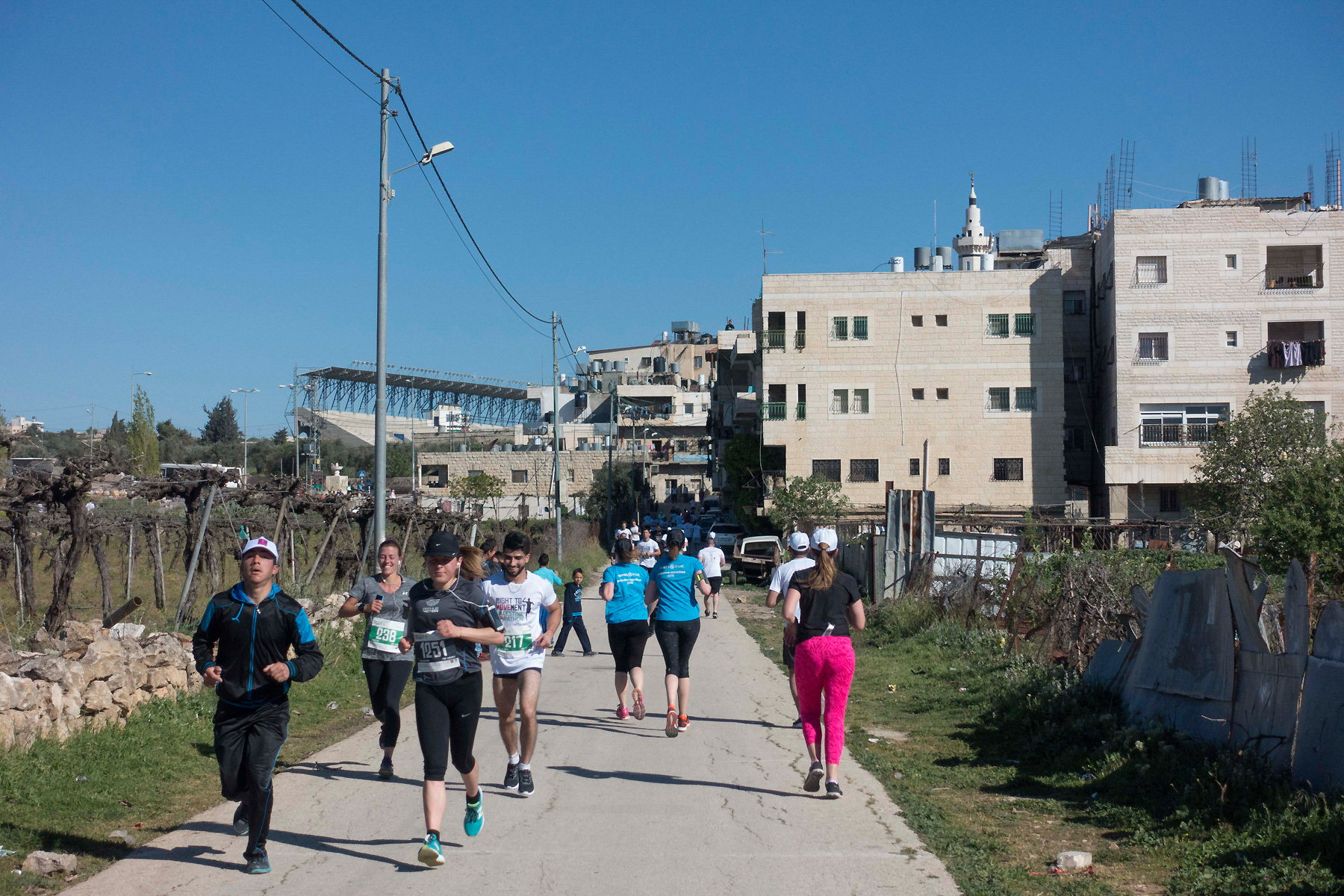 Structured as a loop run, which doubles back on itself, the course passes two refugee camps as well as the illegal partition wall, lined with political graffiti including a few works by Banksy. There is no route in Bethlehem that can be run continuously for more than 6 miles before you come across a border or checkpoint. 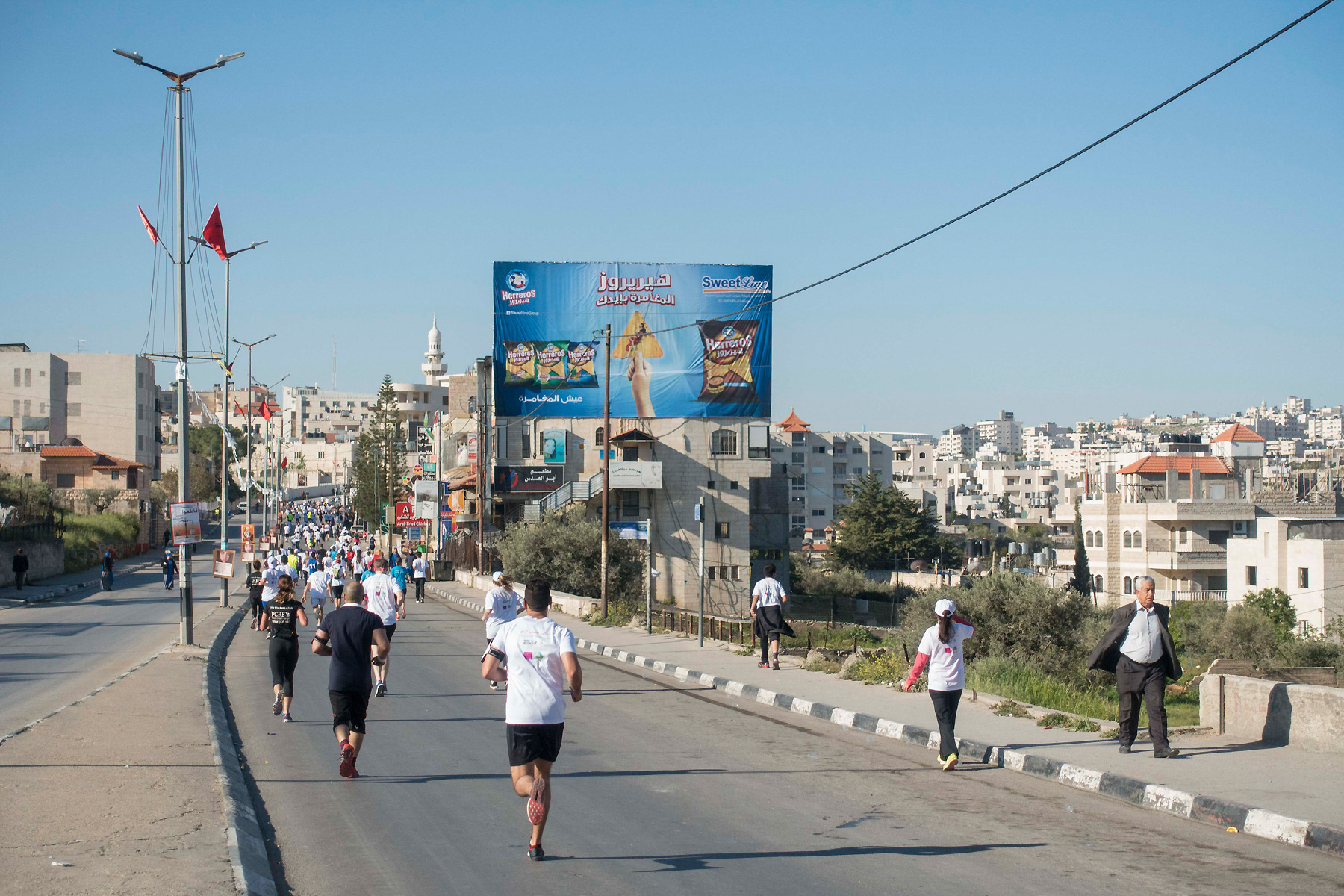 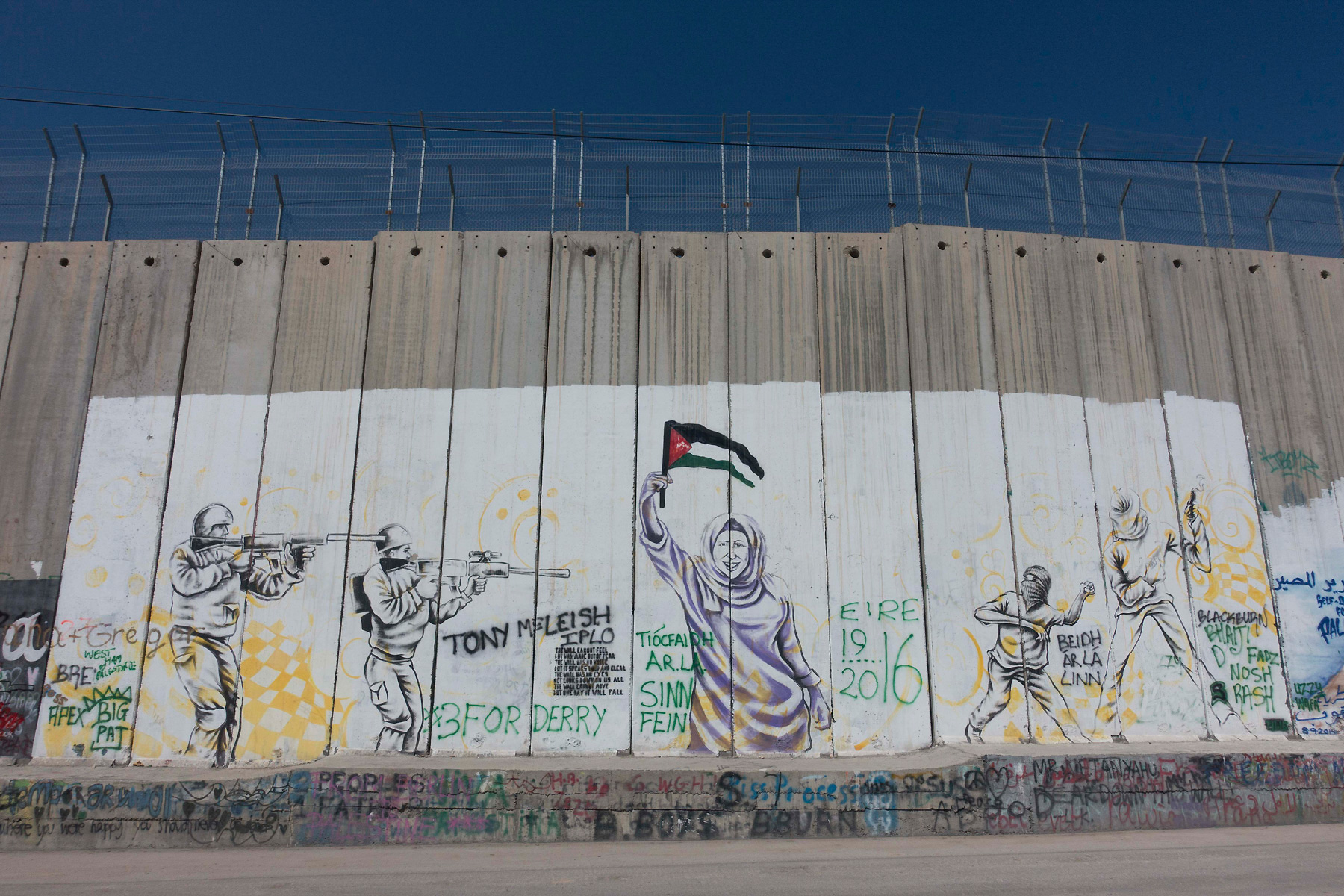 Anti-Israeli icons on the Partition Wall in Bethlehem.

It was my first time to the West Bank, and my third half marathon. Before the race we were introduced to Eitedal Ismail, the Director General of the Higher Council of Youth & Sports for the State of Palestine, and she immediately invited us to her home for dinner. 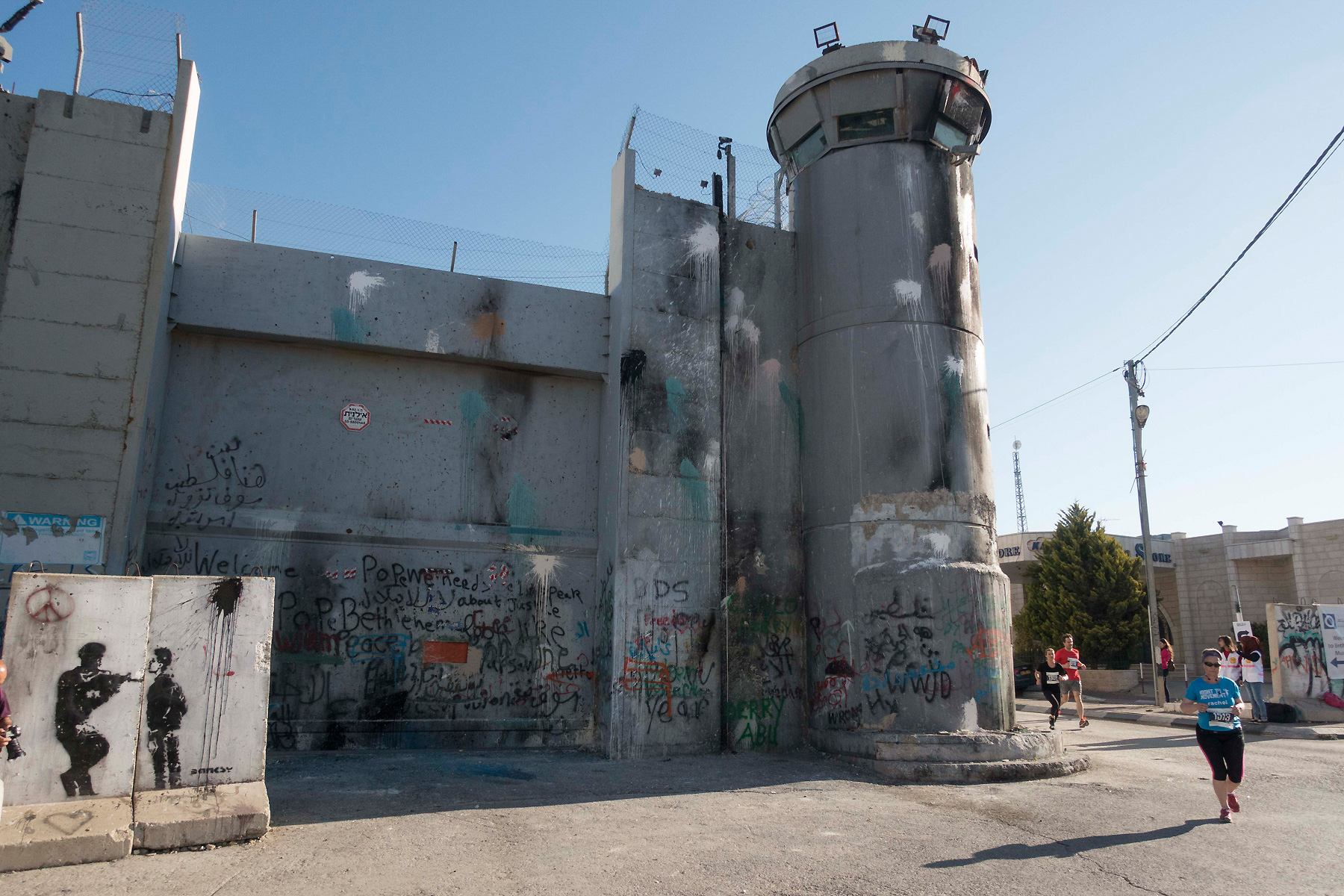 A huge driving force for sport and culture in the Palestinian Authority, she is instrumental to the continued success of the this event. 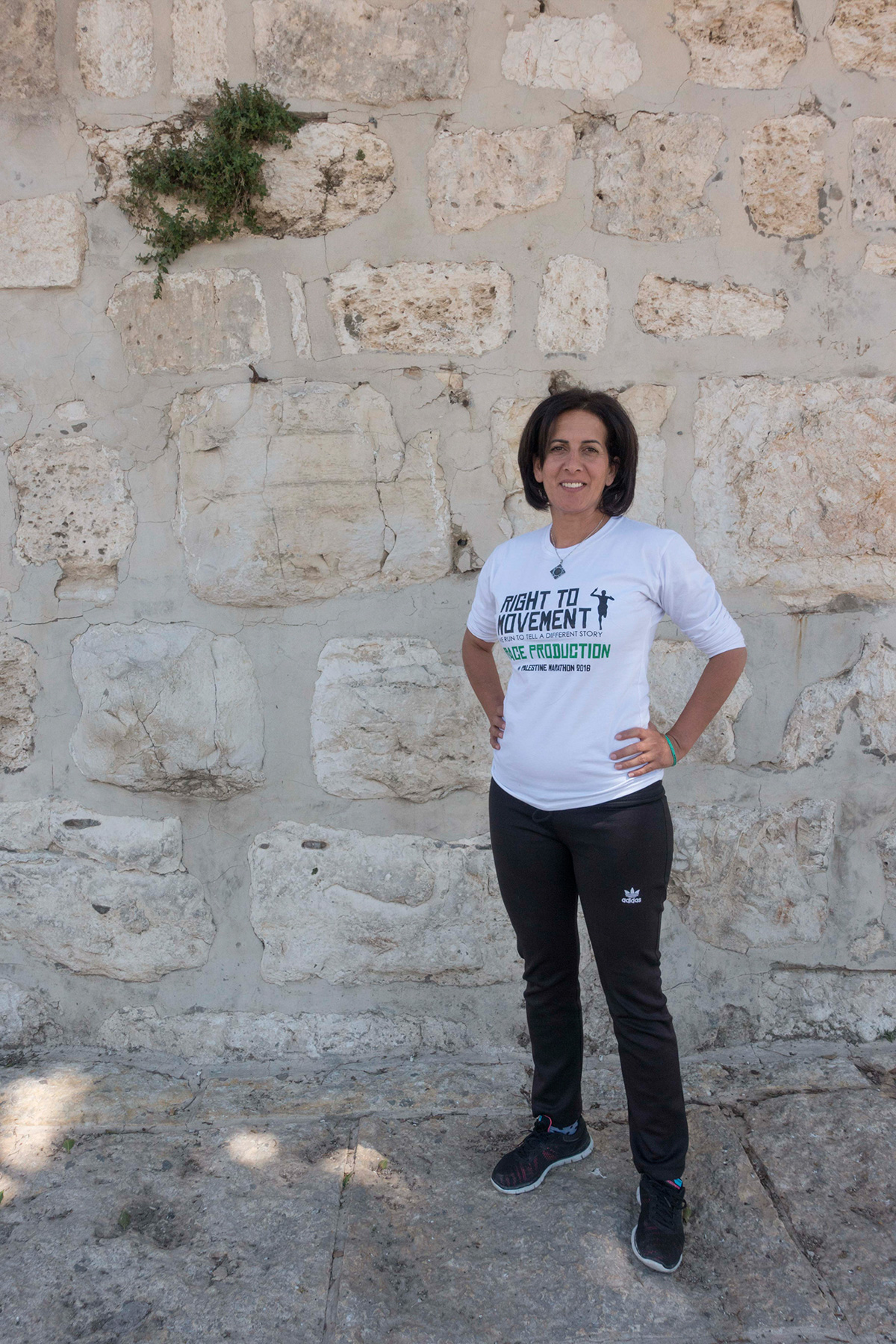 Leaving the West Bank to travel back to the airport, we saw the Israeli military – armed and intimidating, randomly searching cars, mostly near their illegal settlements. We were frustrated when advised not to wear our commemorative Palestine Marathon shirts once back in Israel lest we attract the wrong kind of attention from them. 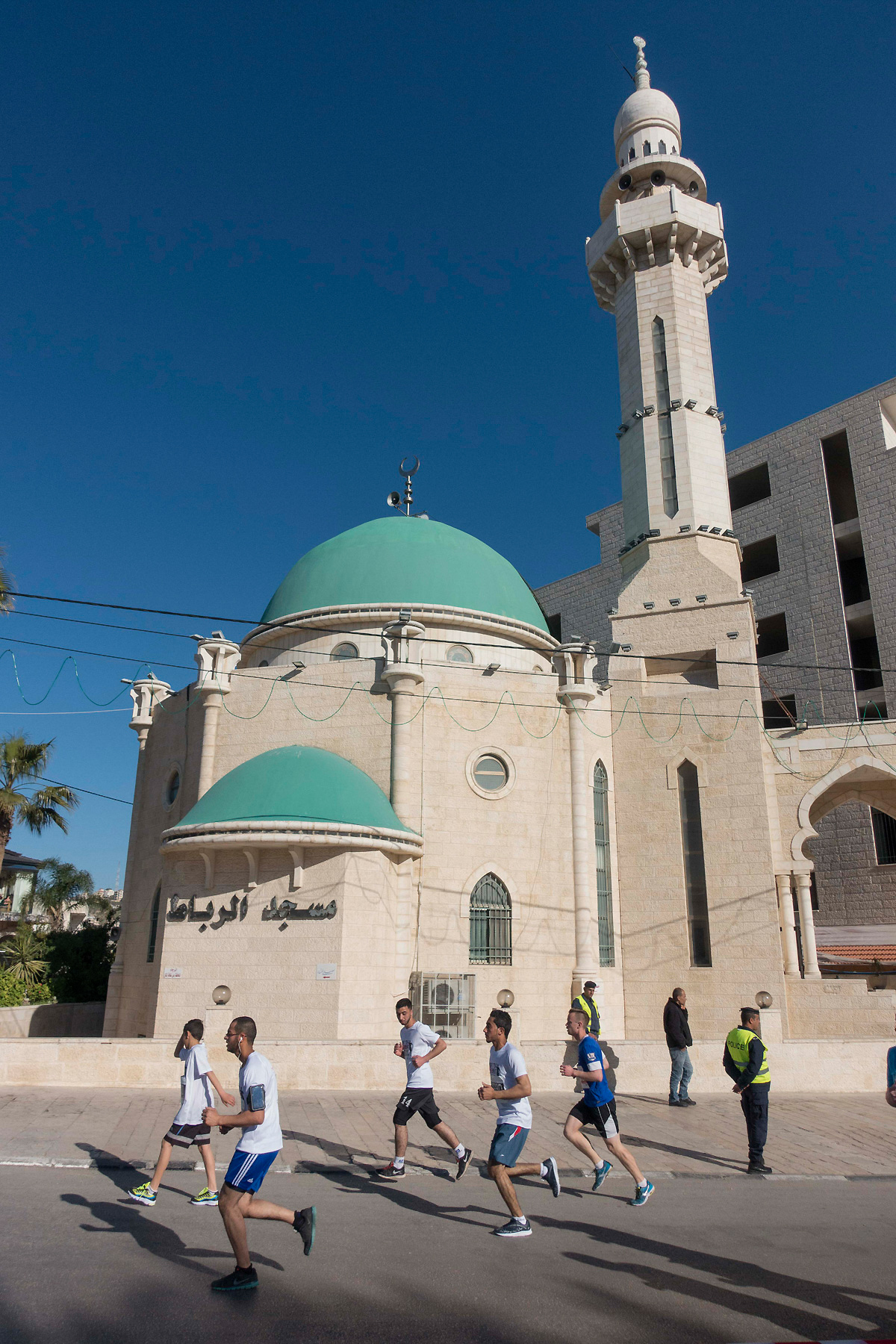 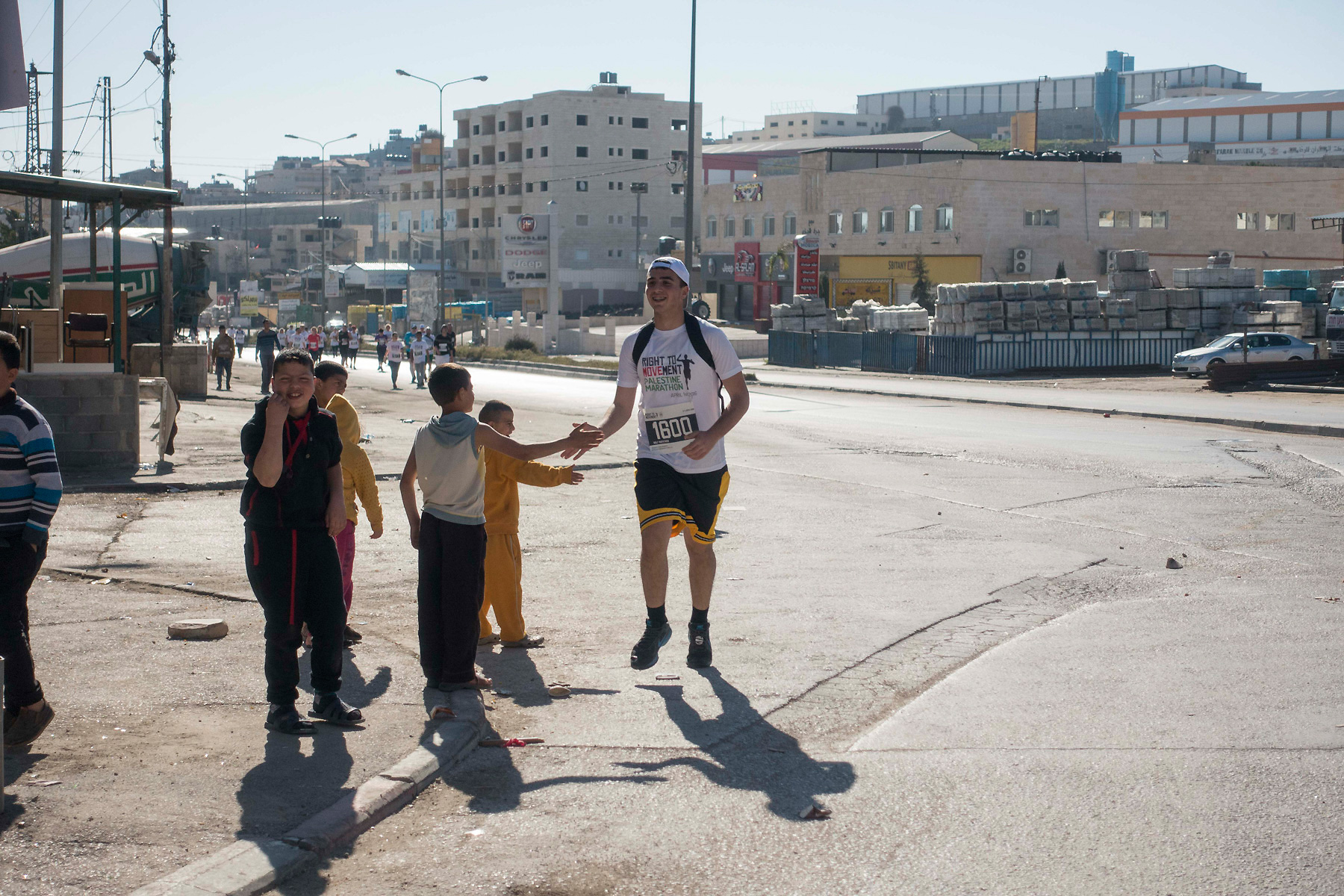 Next year Eitedal and the team plan to syndicate the run to other countries, so that those unable to travel to Bethlehem can still run in solidarity with the cause. Hopefully we’ll go back to the West Bank for 2017’s race though.

Linkedin
RELATED ARTICLES
OTHER ARTICLES
As the Criminal Bar Association enters its fifth week of action, criminal barrister Russel Fraser explains why the legal professionals have walked out and how action is likely to escalate.
Steel City is often overlooked when it comes to the country's cultural radar despite its role in shaping electronic music.
Photojournalist Fiora Garenzi spoke with people still living in Eastern Ukraine, an area which seen some of the heaviest fighting since the war began.
Protestors gathered outside Downing Street following the latest atrocities committed by Israel against Palestinians living in the besieged strip.
After rewriting the indie rulebook with her devastating songs about romantic longing, the singer-songwriter is now imagining a future in which the artist is no longer a product.
A new series of photos by Johny Pitts shines a light on communities and subcultures that have all too often been overlooked.